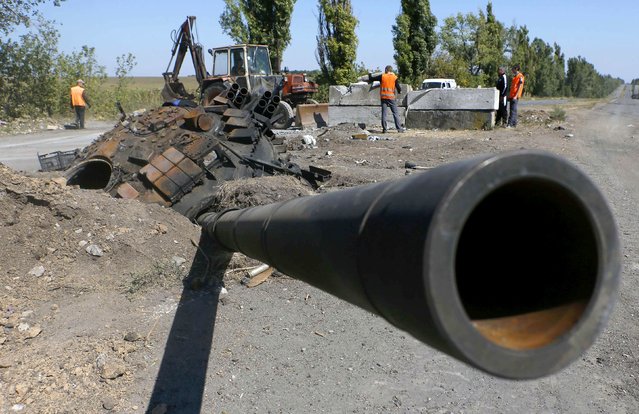 A turret with a gun from a Ukrainian army tank is pictured at the site of a destroyed Ukrainian check-point as road workers clear debris outside the town of Olenivka near the city of Donetsk, eastern Ukraine, September 2, 2014. (Photo by Maxim Shemetov/Reuters) 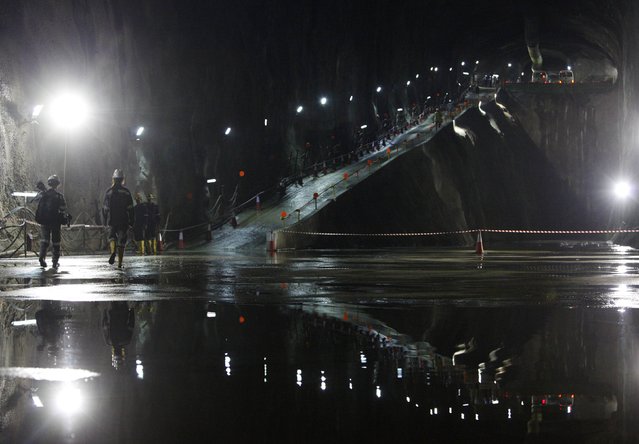 Visitors tour one of two completed caverns at the Jurong Rock Caverns, before its opening in Singapore September 2, 2014. The Jurong Rock Caverns, the first commercial underground facility for liquid hydrocarbons storage in Southeast Asia, opened on Tuesday. When all five caverns are completed, the facility located 150 meters below the ground will be able to store up to 1.47 million cubic meters of liquid hydrocarbons, equivalent to 600 Olympic-sized swimming pools. The remaining three caverns are expected to be completed in 2016. (Photo by Edgar Su/Reuters) 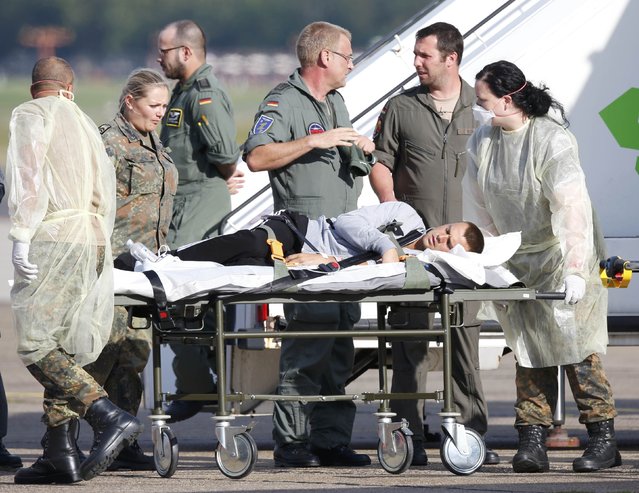 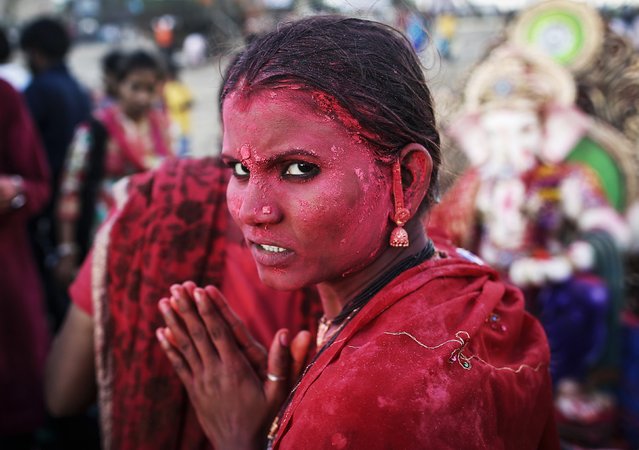 A devotee daubed in coloured powder prays as she takes part in the immersion of the idols of the Hindu god Ganesh, the deity of prosperity on the fifth day of the ten-day-long Ganesh Chaturthi festival in Mumbai September 2, 2014. Ganesh idols are taken through the streets in a procession accompanied by dancing and singing, and later immersed in a river or the sea, symbolising a ritual seeing-off of his journey towards his abode, taking away with him the misfortunes of all mankind. (Photo by Danish Siddiqui/Reuters) 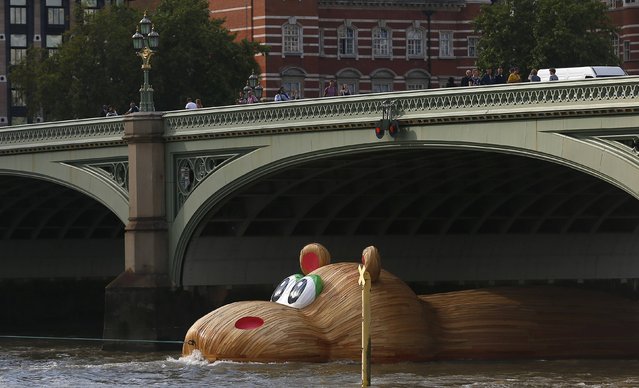 A sculpture of a giant hippopotamus, “HippopoThames”, built by Dutch artist Florentijn Hofman is towed up the Thames under Westminster Bridge in central London, on September 2, 2014. (Andrew Winning/Reuters) 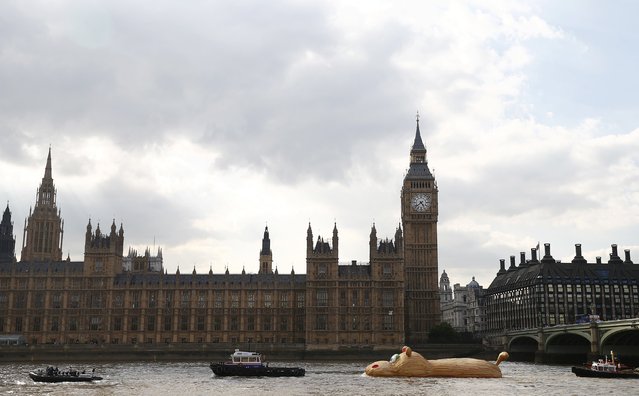 A sculpture of a giant hippopotamus, “HippopoThames”, built by artist Florentjin Hofman is towed up the Thames past the Houses of Parliament in central London, September 2, 2014. (Photo by Andrew Winning/Reuters) 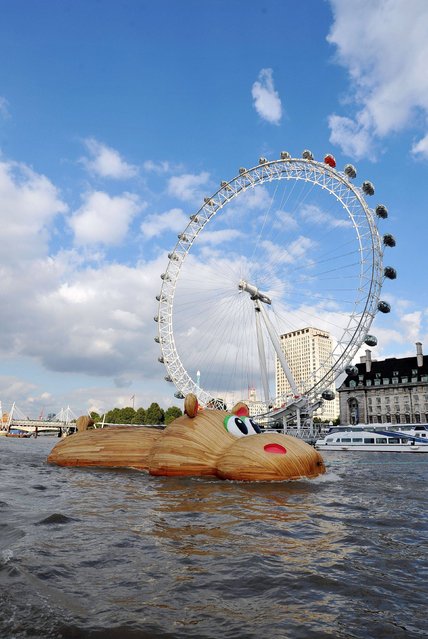 File photo dated September 2, 2014 of Dutch artist Florentijn Hofman's first ever UK commission “HippopoThames” being towed along the River Thames past the London Eye, from its build site at Royal Docks to its end position at Nine Elms on the South Bank. The sculpture, in part inspired by research from National History Museum palaeontologist Dr Victoria Herridge that hippos once swam in the Thames, is a 21-metre-long hippo called HippopoThames. The installation will be semi-immersed in the river and will rise and fall with the tide. Hofman is known for scaled-up sculptures, such as Rubber Duck which has travelled to several major cities since 2007, from Auckland and Sao Paulo to Hong Kong. Hofman's sculptures often originate from everyday objects, but the design of his UK commission has been inspired by the fascinating prehistory of the River Thames. (Photo by Nick Ansell/PA Wire) 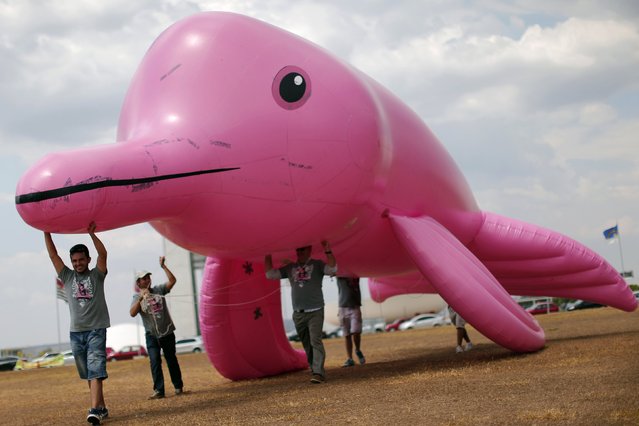 Men position an inflatable giant figure in the shape of a pink river dolphin in front of the National Congress in Brasilia, September 2, 2014. The figure was placed by organizers of the Red Alert conservation campaign, which is trying to halt the killing of dolphins, which is illegal but common. (Photo by Ueslei Marcelino/Reuters) 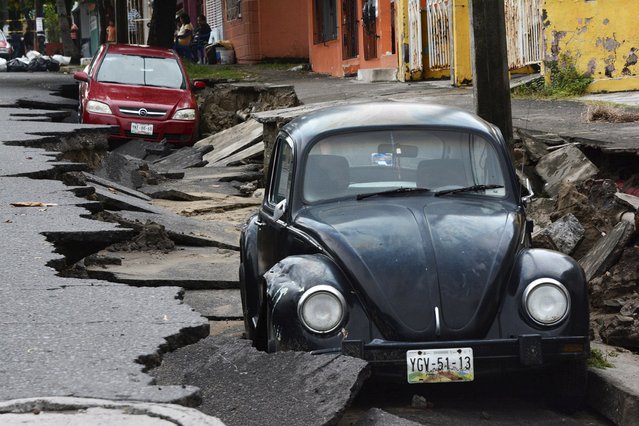 Cars are seen on a street damaged due to heavy rains in Veracruz September 2, 2014. Two separate tropical storms closed in on Mexico from both the Pacific and Atlantic Oceans on Tuesday, risking a double hit on the country a year after a pair of storms converged to cause major flooding that killed over 100 people. Tropical Storm Dolly, which formed in the southern Gulf of Mexico early Tuesday, is likely to strengthen slightly in the next 24 hours until it reaches the mainland, the U.S. National Hurricane Center (NHC) said. (Photo by Jonatan Rosas/Reuters) 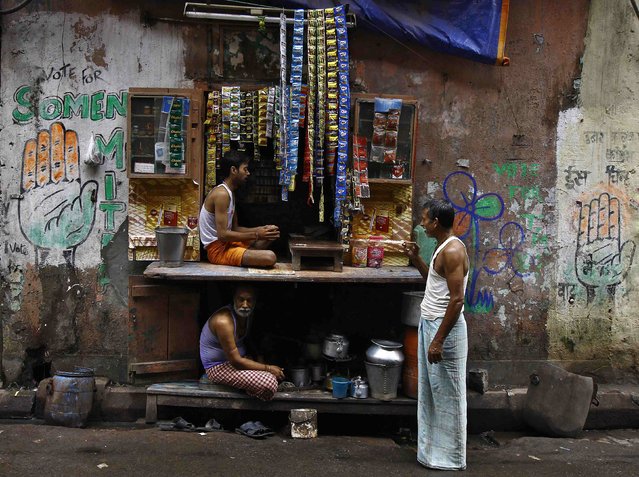 A man drinks tea while standing next to a roadside tea shop in Kolkata September 2, 2014. (Photo by Rupak De Chowdhuri/Reuters) 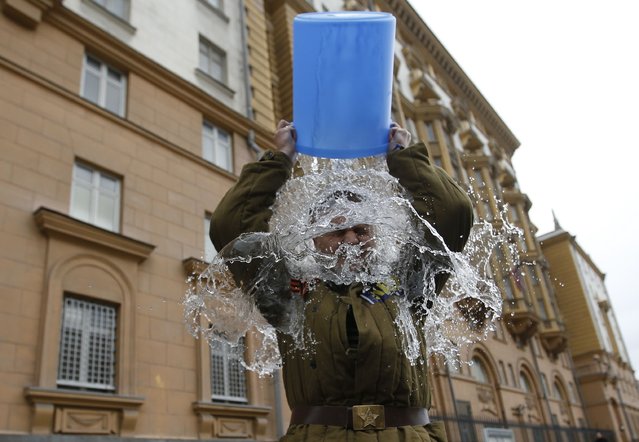 Alexei Didenko, a deputy for the Russian State Duma, dumps a bucket of cold water on himself in front of the American embassy in Moscow, September 3, 2014. Didenko said he was performing the ice bucket challenge not only to raise awareness for ALS (Amyotrophic Lateral Sclerosis) research, but also to protest against new U.S. Ambassador to Russia John Tefft, and what Didenko calls “anti-Russian American propaganda”. (Photo by Maxim Zmeyev/Reuters) 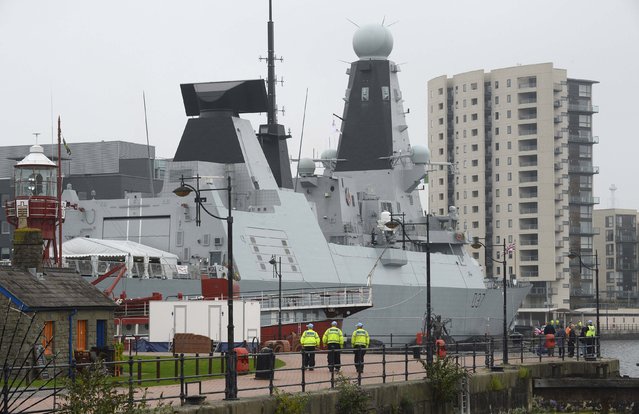 A Royal Navy Type 45 destroyer, HMS Duncan, is berthed in Cardiff Bay, ahead of the forthcoming NATO summit, in Wales September 3, 2014. (Photo by Rebecca Naden/Reuters) 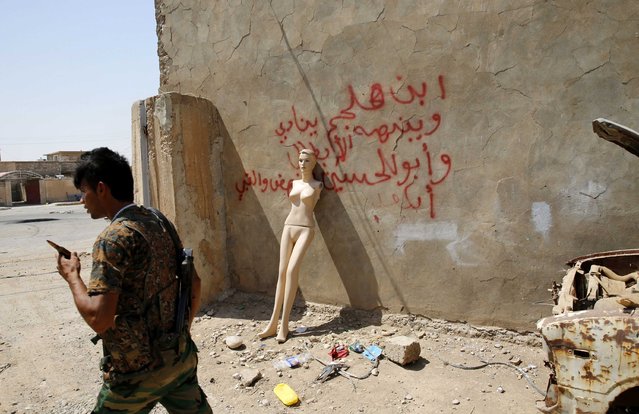 A Kurdish Peshmerga fighter walks past a mannequin leaning on the wall of the former headquarters of Islamic State militants in Sulaiman Pek, after the town was recaptured this week, September 3, 2014. (Photo by Ahmed Jadallah/Reuters) 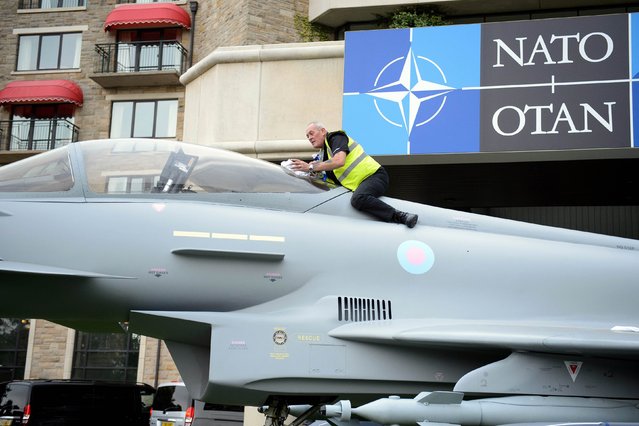 A craftsman from a model-making company applies final touches to a full-sized model of a Typhoon fighter jet at the Celtic Manor Hotel, ahead of the NATO summit, in Newport, Wales, September 3, 2014. (Photo by Leon Neal/Reuters) 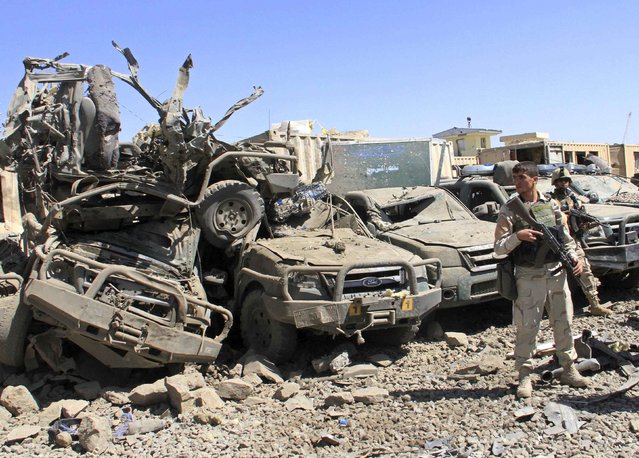 Members of the Afghan security force keep watch at the site of a suicide bomb attack in Ghazni Province September 4, 2014. Taliban insurgents detonated two powerful truck bombs outside the office of Afghanistan's spy agency and a police compound in the central town of Ghazni on Thursday, killing 18 people and wounding around 150, the provincial governor said. (Photo by Mustafa Andaleb/Reuters) 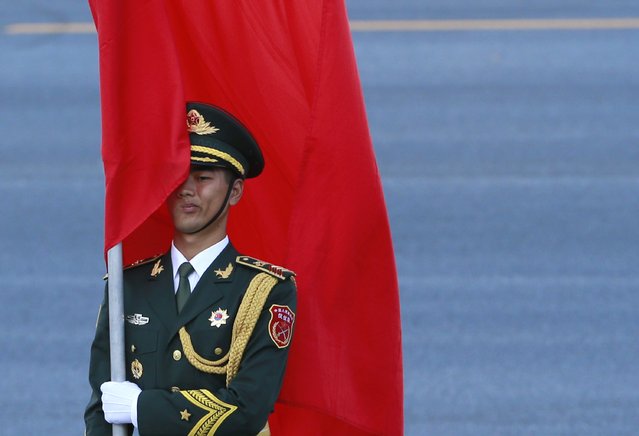 A Chinese honor guard holds a red flag during an official welcoming ceremony for Malaysia's King Abdul Halim at the Great Hall of the People in Beijing, September 4, 2014. (Photo by Kim Kyung-Hoon/Reuters) 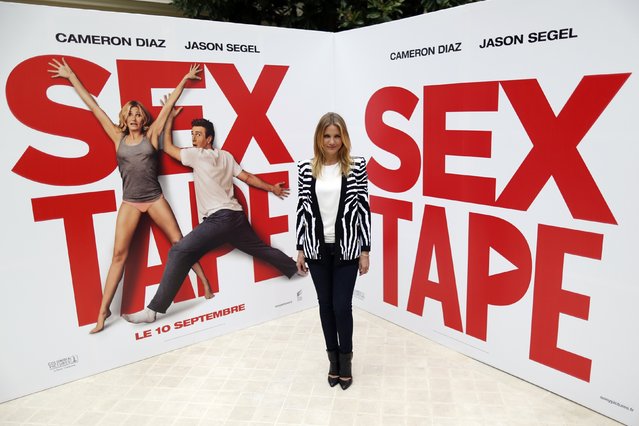 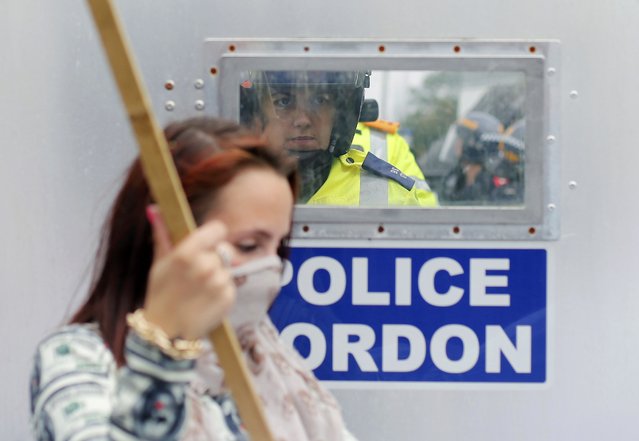 A police officer looks at demonstrators through a window in a security screen during the NATO summit at the Celtic Manor resort, near Newport, in Wales September 4, 2014. The resort is the venue for the two day NATO summit which started today. (Photo by Suzanne Plunkett/Reuters) 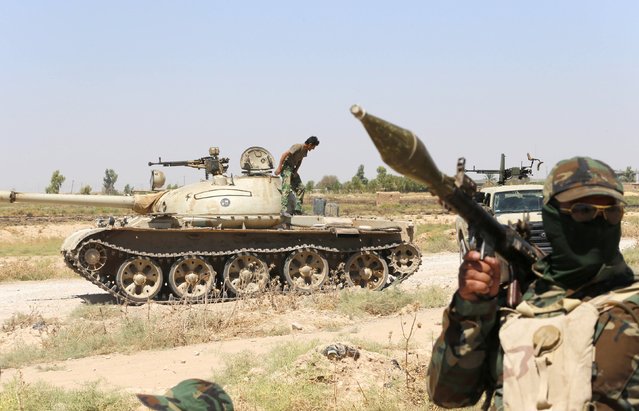 Kurdish Peshmerga fighters take their positions during clashes with the Islamic State (IS) on the front line at Buyuk Yeniga village September 4, 2014. (Photo by Ahmed Jadallah/Reuters) 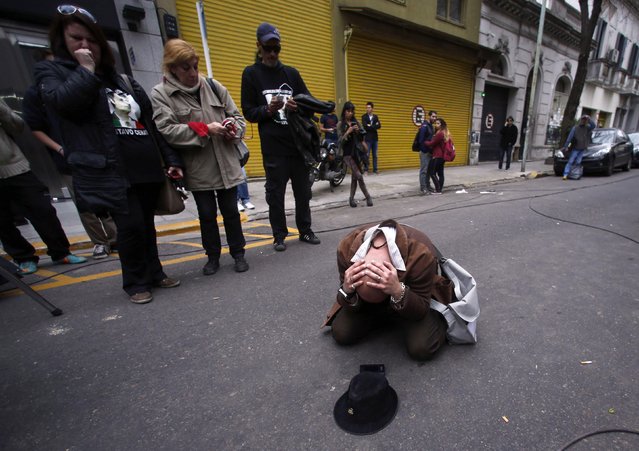 A fan reacts outside the clinic where Argentine musician Gustavo Cerati died today at the age of 55 in Buenos Aires September 4, 2014. Cerati was a flamboyant showman who brought stadium rock to Latin America with his band Soda Stereo. Grammy-winning Cerati had been in a coma since suffering a stroke in May 2010, after a show in Venezuela. (Photo by Marcos Brindicci/Reuters) 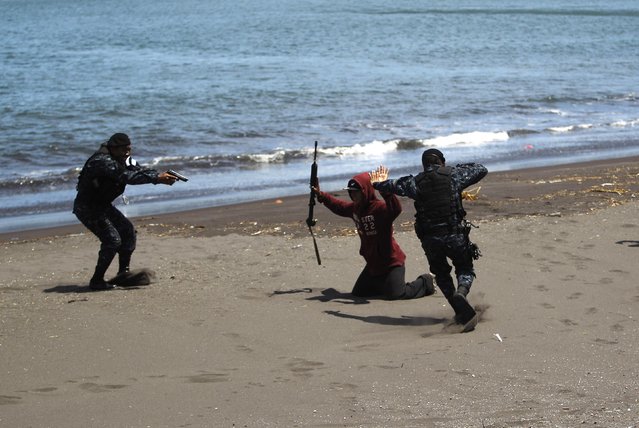 Police officers aim their weapons at a man (C) as they participate in an exhibition of tactics used to combat organized criminals and the drug traffickers, in Puerto Quetzal in Escuintla, near Guatemala City, September 4, 2014. (Photo by Jorge Dan Lopez/Reuters) 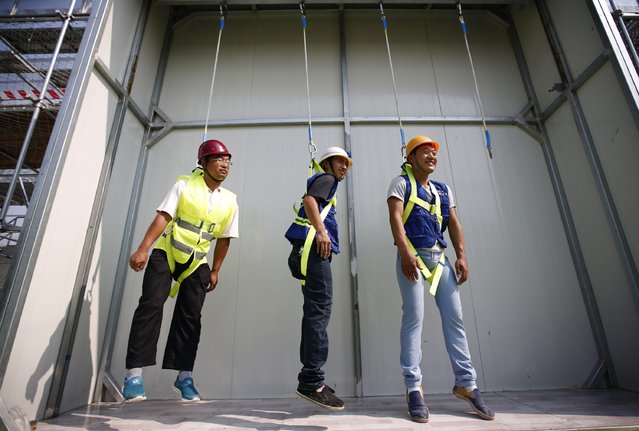 Participants hang from ropes as they learn how to use safety gears at an experience centre for construction safety training in Beijing, September 5, 2014. The centre which opened in June 2014 was established to educate workers about construction safety. According to the centre, about 1,000 construction workers undergo 3-hour classes which comprises of 33 modules every month. (Photo by Kim Kyung-Hoon/Reuters) 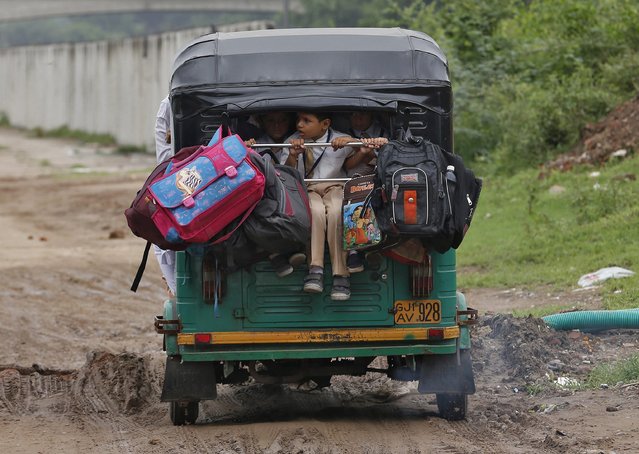 School children travel on a packed auto-rickshaw on their way to school in the western Indian city of Ahmedabad September 5, 2014. (Photo by Amit Dave/Reuters) 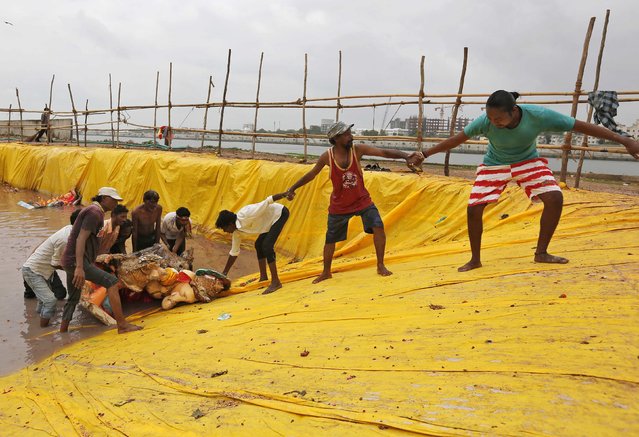 Municipal workers prepare to lift an idol of the Hindu elephant god Ganesh, the deity of prosperity, from a pond after its immersion during the ten-day-long Ganesh Chaturthi festival in the western Indian city of Ahmedabad September 5, 2014. Ganesh idols are taken through the streets in a procession accompanied by dancing and singing, and later immersed in a river or the sea symbolising a ritual seeing-off of his journey towards his abode, taking away with him the misfortunes of all mankind. (Photo by Amit Dave/Reuters) 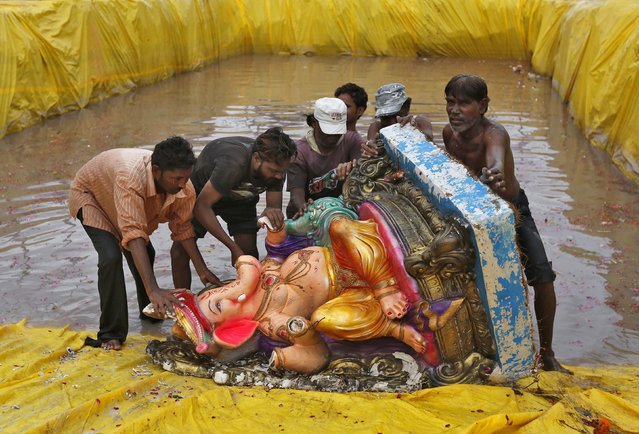 Municipal workers prepare to lift an idol of the Hindu elephant god Ganesh, the deity of prosperity, from a pond after its immersion during the ten-day-long Ganesh Chaturthi festival in the western Indian city of Ahmedabad September 5, 2014. (Photo by Amit Dave/Reuters) 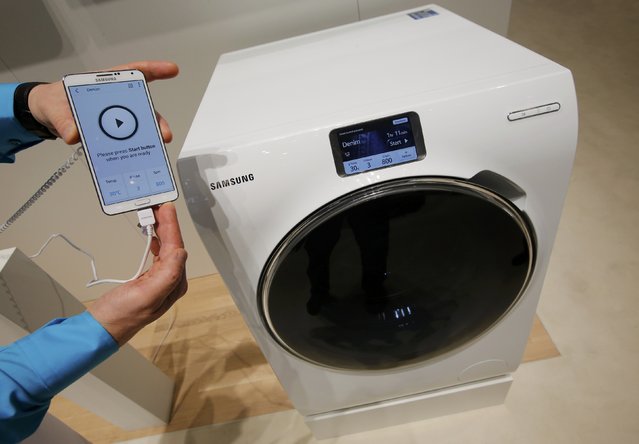 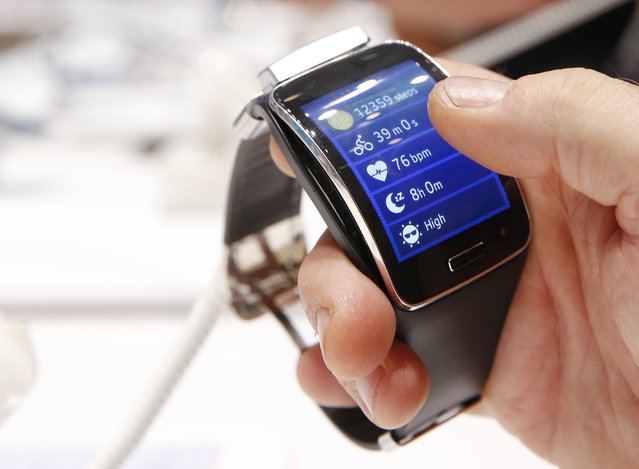 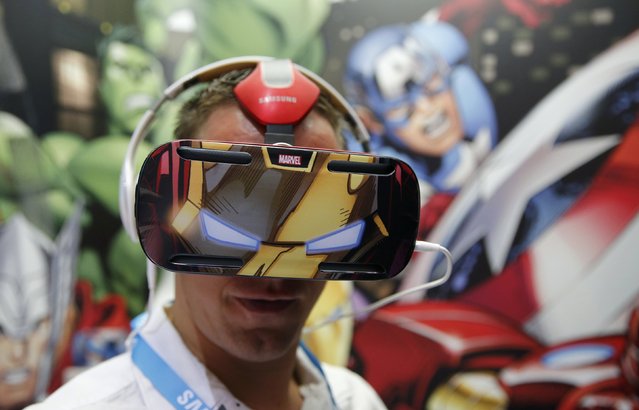 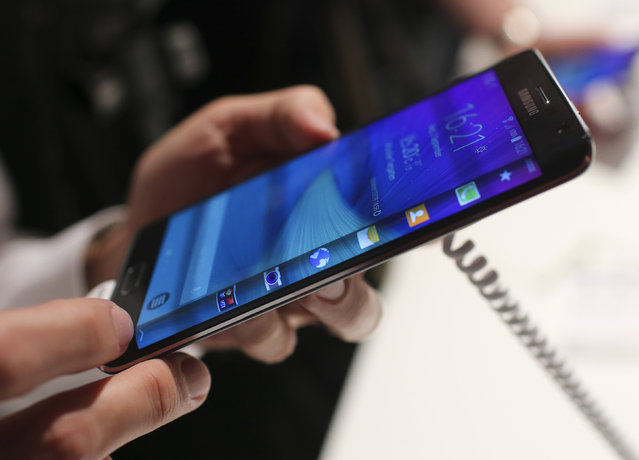