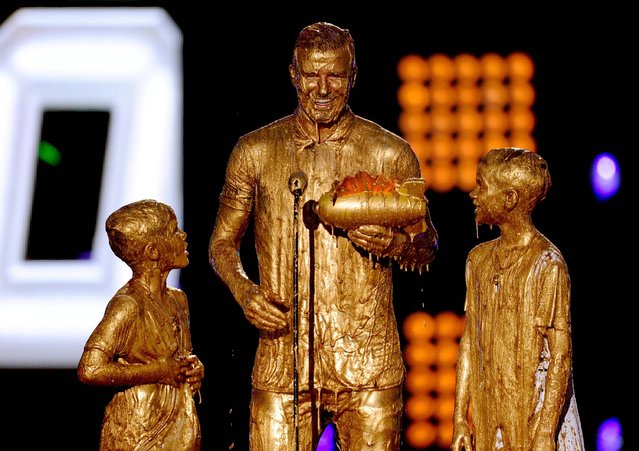 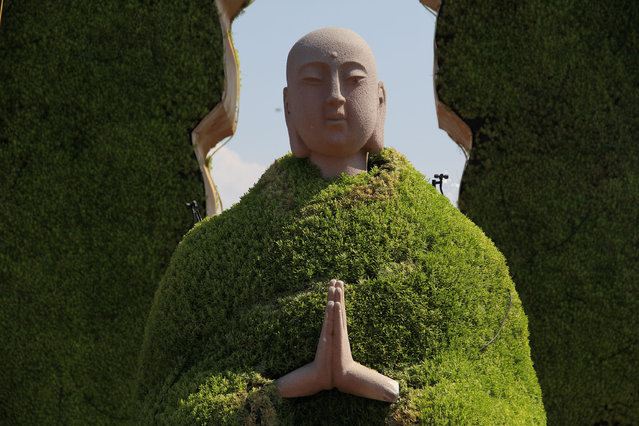 A sculpture of Monk Tang (also known as Tang Xuanzang in Chinese noval “Journey to the West”) wearing a “green coat” made up of green plants was seen on at Dayanta July 15, 2014 in Xi'an, Shaanxi province of China. A hot weather with the temperature of 35 degree celsius hit Xi'an on July 15. (Photo by ChinaFotoPress/Getty Images) 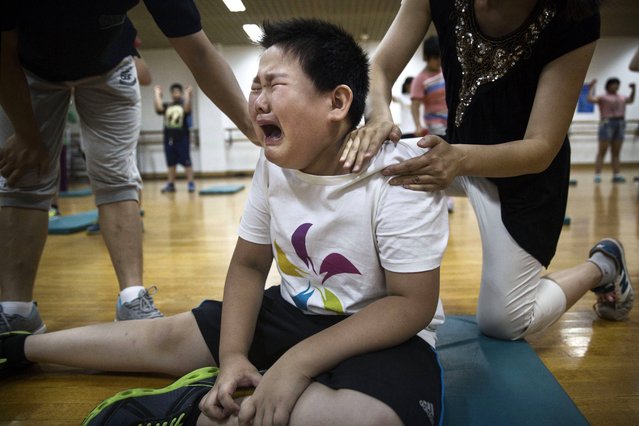 An overweight Chinese student weeps after a light exercise during training at a camp held for overweight children at a local university on July 16, 2014 in Beijing, China. Obesity is a growing problem amongst the burgeoning middle-class in China, and recent studies show that the country is now the second fattest in the world behind the United States. Many parents send their children to special summer camps in an effort to get them into shape and prepare them for the hectic challenges of life in one of the world's largest economies. (Photo by Kevin Frayer/Getty Images) 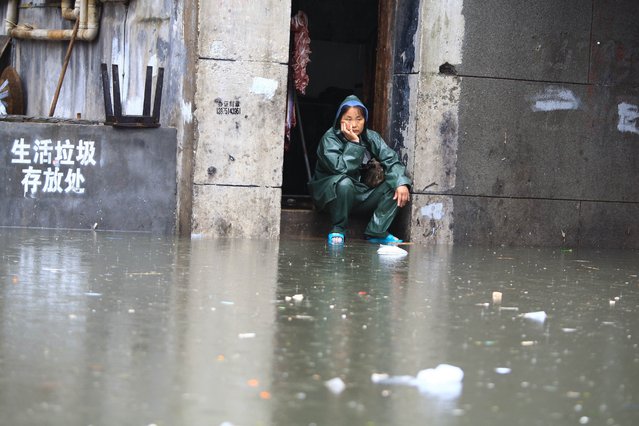 A woman looks on at a flooded area in Changsha, central China's Hunan province, on July 15, 2014. The meteorological department in Hunan issued an orange alert for storm, as heavy rain hits the province's central and northern area, local media reported. (Photo by AFP Photo) 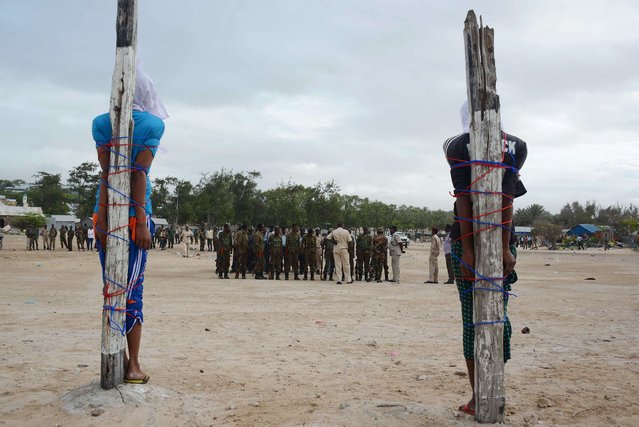 Two Somalis, convicted of the murder of a Somali nurse working with a Turkish medical aid unit, are tied to large wooden stakes as they wait to be executed by a firing squad on July 15, 2014 in Mogadishu. (Photo by Mohamed Abdiwahab/AFP Photo) 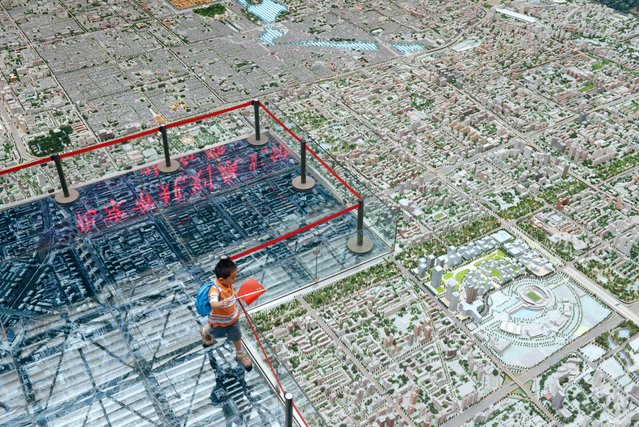 A boy looks at a scaled model of Beijing's urban development at an exhibition center in Beijing on July 16, 2014. Chinese growth accelerated to a forecast-beating 7.5 percent in the second quarter, official data showed on July 16, as government stimulus provided a much-needed boost to the world's second-largest economy. (Photo by Wang Zhao/AFP Photo) 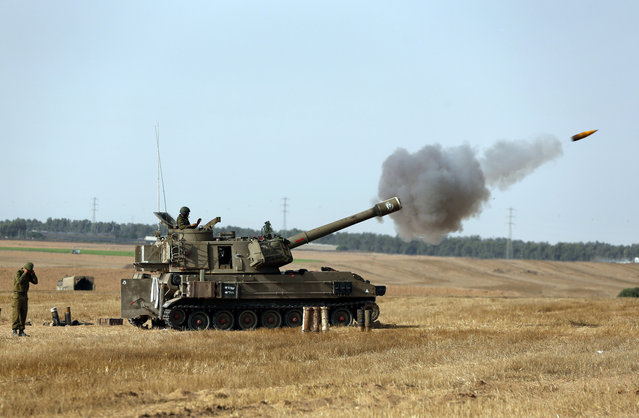 Israeli soldiers on a mobile artillery unit fire a shell towards Gaza at a position on the Israel-Gaza border, Saturday, July 12, 2014. Israeli airstrikes overnight targeting Hamas in Gaza hit a mosque its military says concealed the militant group's weapons, in an offensive that showed no signs of slowing down. Israel launched its campaign five days ago to stop relentless rocket fire on its citizens. While there have been no fatalities in Israel, Palestinian officials said overnight attacks raised the death toll there to over 120, with more than 920 wounded. (Photo by Lefteris Pitarakis/AP Photo) 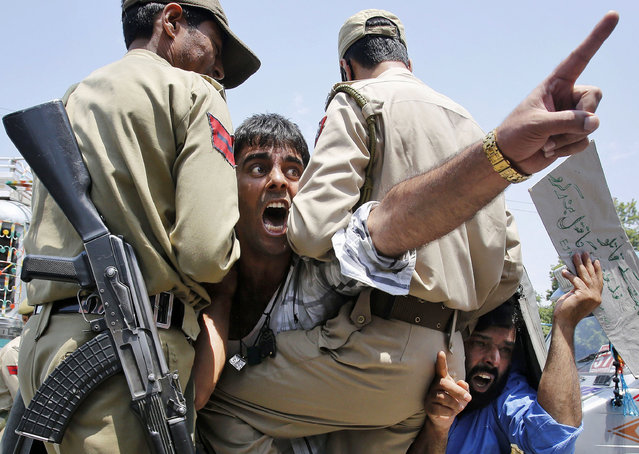 Kashmiri protesters shout slogans against Israel from inside a police vehicle after they were detained during a protest in Srinagar, India, Monday, July 14, 2014. The protest was against the Israeli military operation in Gaza strip. Palestinian militants in the Gaza Strip launched an unmanned drone aircraft at Israel on Monday and Israeli air attacks killed four Gaza residents, as the conflict between the antagonists closed out its first week with no end in sight. The placard reads: “Killer of Humanity, Stop Killings in Palestine”. (Photo by Mukhtar Khan/AP Photo) 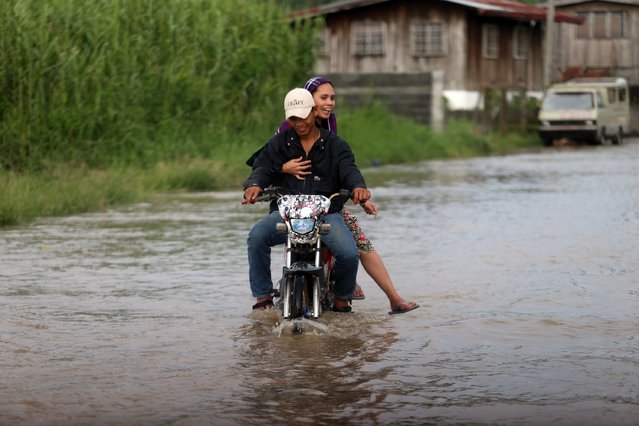 A motorcyclist crosses a flooded road on July 15, 2014 in Sultan Kudarat, Mindanao, Philippines. Thousands of people have been fleeing coastal areas of Philippines as the first major typhoon of the season is expected to make landfall this evening. Typhoon Rammasun is heading towards eastern Philippines and is likely to pass over the capital city Manila on its way through the country. (Photo by Jeoffrey Maitem/Getty Images) 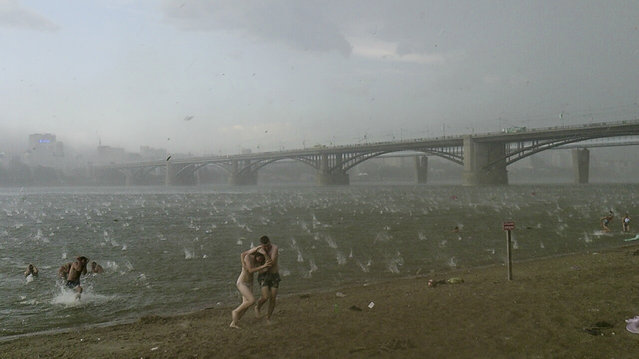 In this photo taken on a smartphone on Saturday, July 12, 2014, people run to shelter from hailstorm on the beach at Ob River, the major river in western Siberia in Novosibirsk, Russia. The Investigative Committee said in a statement published online Monday that two young girls aged three and four had died Saturday in the lakeside town of Bredsk, not far from the large Siberian city of Novosibirsk. The two girls died after sustaining traumatic brain injuries when a tree fell on their tent, where they were taking shelter from the storm along with their families. (Photo by Nikita Dudnik/AP Photo) 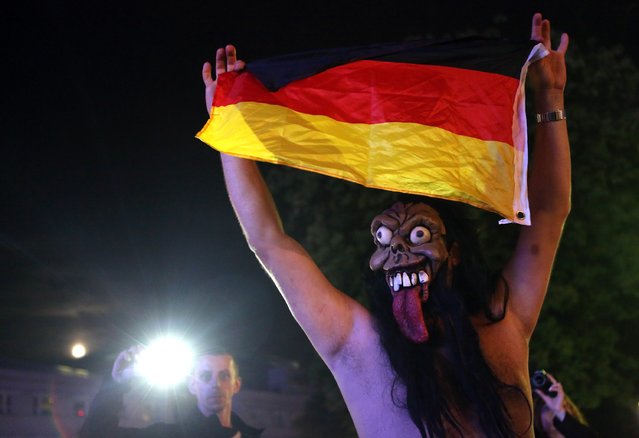 A German team soccer fan celebrates after Germany scored a goal in the Germany versus Argentina FIFA World Cup final match on the Berlin Fan Mile (Fanmeile) open-air broadcast area (“Public Viewing” in German) behind the Brandenburg Gate on July 13, 2014 in Berlin, Germany. The FIFA World Cup final took place in the Maracana Stadium in Rio de Janeiro between Germany and Argentina, with an expected global television audience of more than a billion viewers. Germany won the game 1-0. (Photo by Adam Berry/Bongarts/Getty Images) 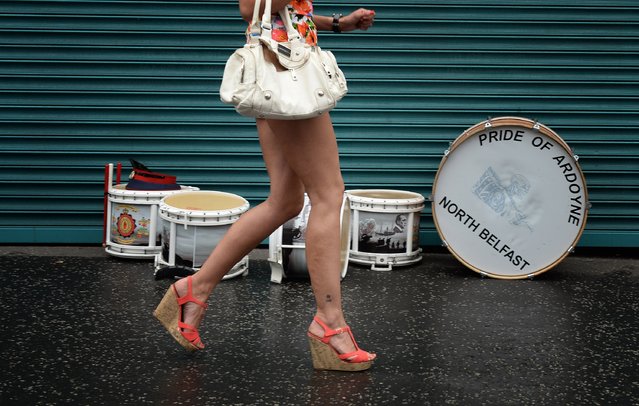 A female band supporter runs past a shop front on her way to watch the start of the annual 12th of July march in Belfast city centre on July 12, 2014 in Belfast, Northern Ireland. The parade's celebrate the protestant King William of Orange's victory over the catholic English King James II at the Battle of the Boyne in 1690. (Photo by Charles McQuillan/Getty Images) 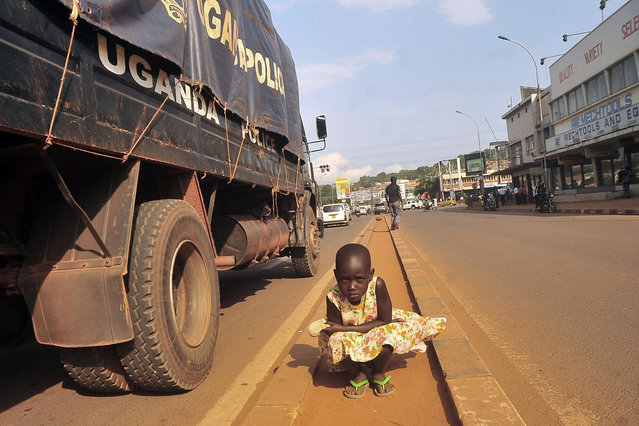 A Ugandan street child poses in the middle of the streets as a police truck goes past her, in Kampala, Uganda, Thursday, July 17, 2014. Homeless children in Uganda's urban centers face beatings and abuse at the hands of police and local officials, Human Rights Watch charged in a new report that urges Ugandan authorities to protect street children from targeted roundups and arbitrary detentions. A police spokesman said the allegations are “totally not true”. (Photo by Stephen Wandera/AP Photo) 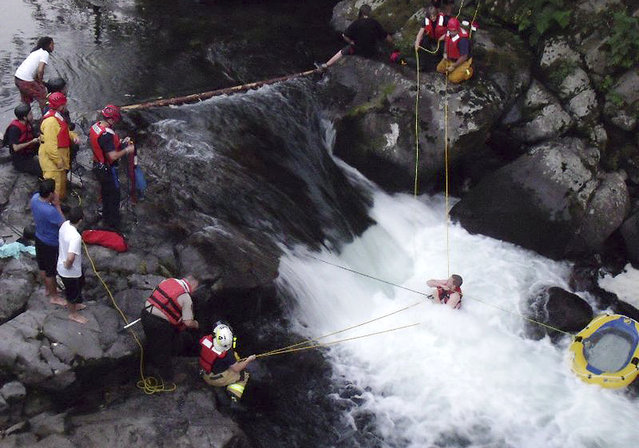 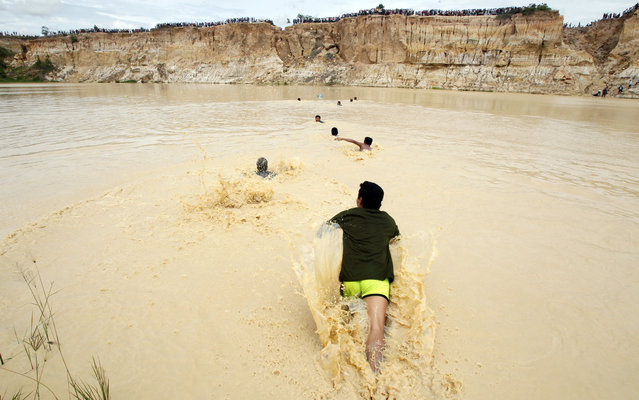 Rescue workers dive into a pond as they conduct a search operation following an helicopter crash in Prey Sar village at the outskirt of Phnom Penh, Cambodia, Monday, July 14, 2014. A Cambodian military helicopter crashed during a training mission south of the capital on Monday, killing five people on board, police said. (Photo by Heng Sinith/AP Photo) 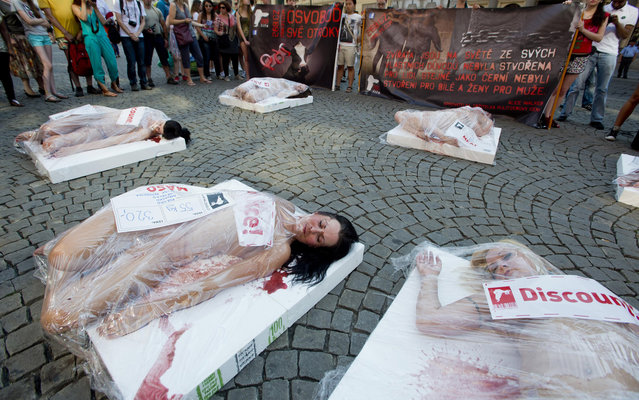 Half-naked animal rights activists packed like a portions of fresh meat for a supermarket lay on pavement in downtown Prague, Czech Republic, Friday, July 18, 2014, during a protest meeting “Animal is No Commodity” held by 269 international movement against the exploitation of animals. (Photo by Vit Simanek/AP Photo/CTK) 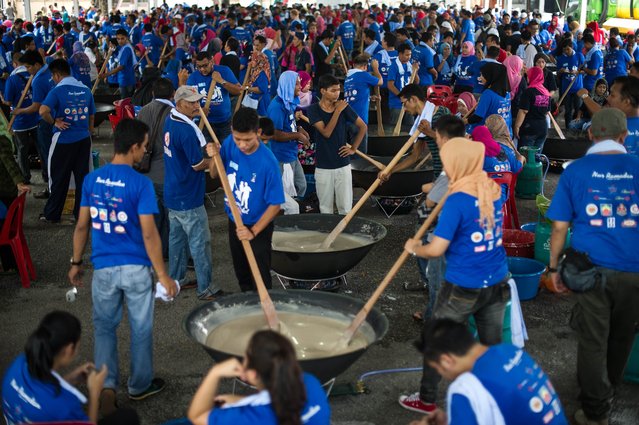 Malaysian Muslims cook the famous “Dodol” dish to be given for breaking fast at a mosque during the fasting month of ramadan in Kuala Lumpur on July 13, 2014. Dodol is a sweet toffee-like confection, popular in Malaysia that is cooked and distributed during ramadan. (Photo by Mohd Rasfan/AFP Photo) 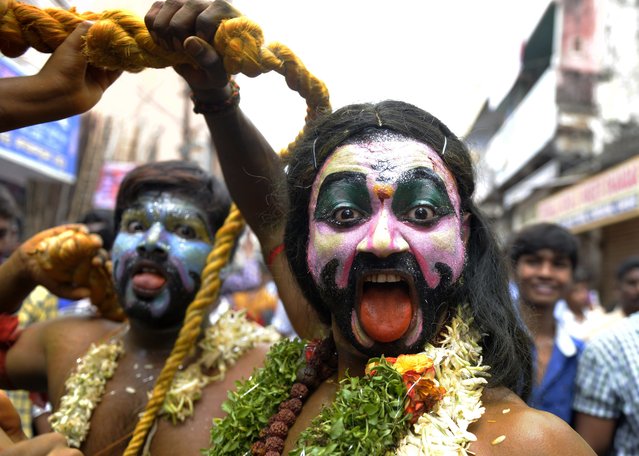 An Indian Hindu male devotee dressed as a woman dances during the festival of “Bonalu”, a ritual offering to the goddess Kali, at the Sri Ujjaini Mahakali Temple in Secunderabad on July 13, 2014. The goddess Kali is honoured mostly by women during the Bonalu festival through offerings of food and dances. (Photo by Noah Seelam/AFP Photo) 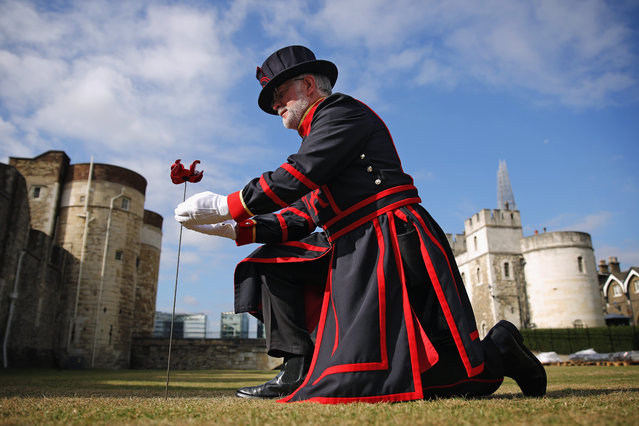 Crawford Butler, the longest serving Yeoman Warden at the Tower of London, poses with the first ceramic poppy to be 'planted' in the dry moat at Tower of London on July 17, 2014 in London, England. The poppy is the first of 888,246 created by artist Paul Cummins to represent the British Military personnel that died in the First World War. The display will be installed by a team of volunteers from across the UK with the last to be put in place on Armistice Day on November 11, 2014. (Photo by Dan Kitwood/Getty Images) 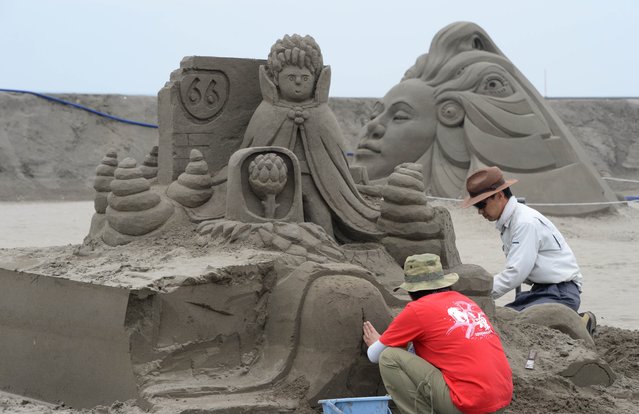 Sand artists build their sculptures at Yasashigaura beach in Asahi, Chiba prefecture on July 13, 2014. The Asahi Sand Sculpture exhibition will run from July 15 until August 7 with over 50,000 visitors expected. (Photo by Toshifumi Kitamura/AFP Photo) 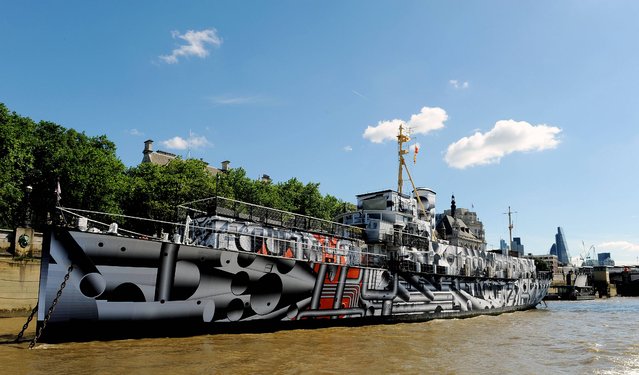 The WWI warship HMS President (1918) which has become a public art work on London's Embankment, called Dazzle Ship London by artist Tobias Rehberger, the ship, one of the last surviving three WWI warships, has been covered in dazzle camouflage print as part of 14 – 18 Now, a programme of events to mark the centenary of World War I. (Photo by Nick Ansell/PA Wire) 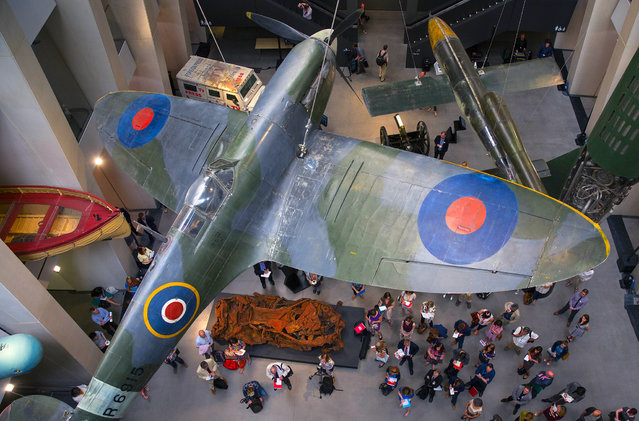 A general view of the main atrium at the Imperial War Museum on July 16, 2014 in London, England. The new World War One galleries at the Imperial War Museum are due to open on July 16, 2014 after a 40 million GBP refurbishment. The galleries will tell the story of the First World War, how it started, why it continued and its global impact. The exhibition features iconic objects including a Harrier jet, a Spitfire and a V2 rocket. (Photo by Oli Scarff/Getty Images) 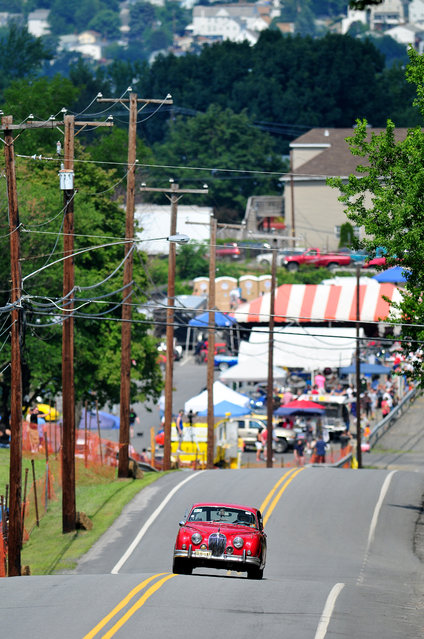