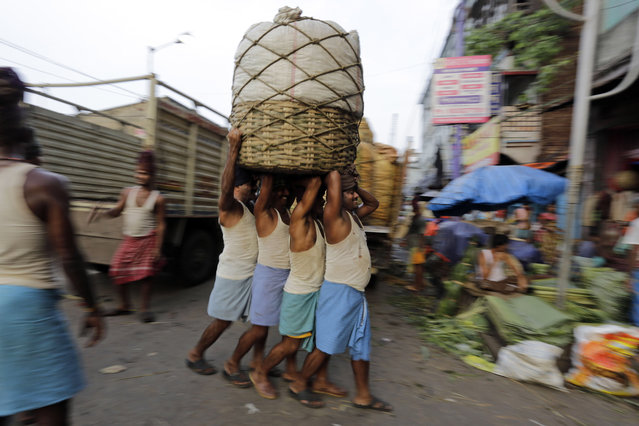 Indian laborers carry a load pf vegetables at a wholesale market in Kolkata, india, Wednesday, July 9, 2014. India's new government presents its inaugural budget this week in the first substantive test of whether Prime Minister Narendra Modi will deliver on ambitious promises to revive stalled economic growth. India's economic growth has slowed to less than 5 percent for the last two years after a decade of expanding by an average of 8 percent, which is the minimum the government says is necessary to provide jobs for the 13 million young Indians who enter the workforce each year. (Photo by Bikas Das/AP Photo) 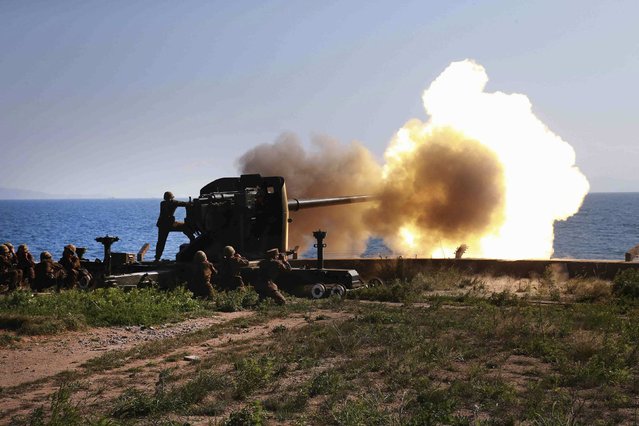 Soldiers fire an artillery piece during a visit by North Korean leader Kim Jong Un to inspect the defence detachment on Ung Islet, which is defending an outpost in the East Sea of Korea, in this undated photo released by North Korea's Korean Central News Agency (KCNA) in Pyongyang July 7, 2014. (Photo by Reuters/KCNA) 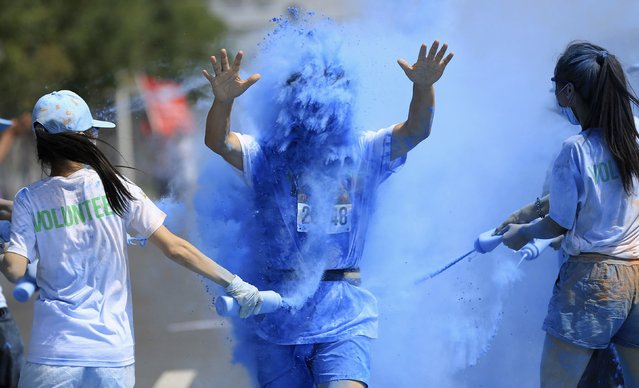 A participant (C) reacts as he is sprayed with coloured powder during a 5-kilometre Color Run in Shenyang, Liaoning province July 5, 2014. (Photo by Reuters/Stringer) 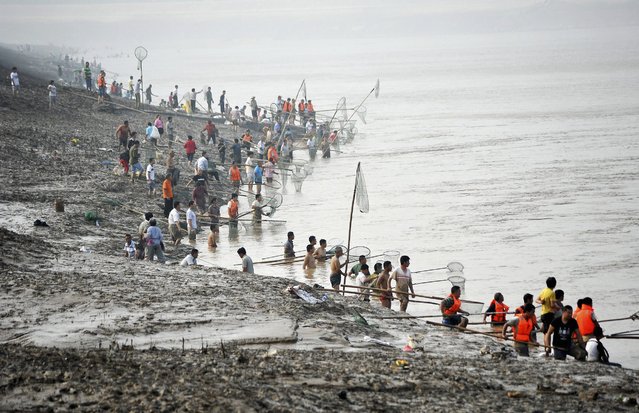 People fish along the bank of the Yellow River as the Sammenxia Dam discharges flood waters downstream in Pinglu, Shanxi province July 6, 2014. People risked sitting on the bank of the flooded river to catch the surge of fish forced to the river surface by the rushing water. (Photo by Reuters/China Daily) 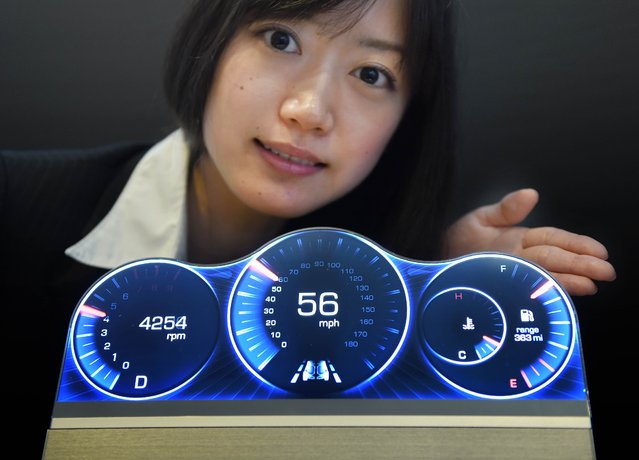 An employee of Japan's electronics giant Sharp introduces a prototype model of the newly developed free-form LCD display at its head office in Tokyo on July 7, 2014. The free-form display can be shaped into various patterned models such as elliptical shape using Sharp's IGZO technology. (Photo by Toru Yamanaka/AFP Photo) 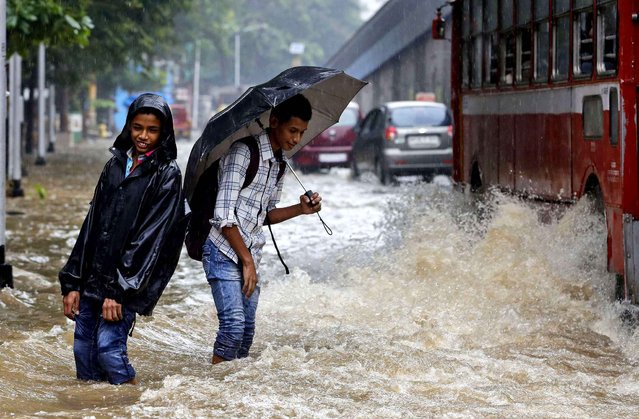 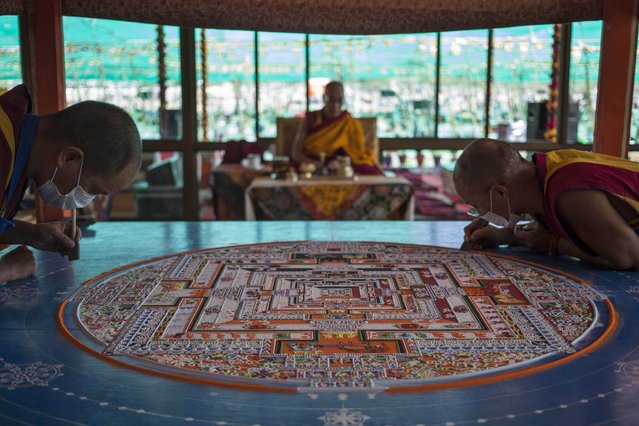 Buddhist monks prepare a Sand Mandala, a spiritual and ritual symbol depicting the Buddhist universe, as Tibetan spiritual leader the Dalai Lama is seated at the back on the fifth day of Kalachakra near Leh, India, Monday, July 7, 2014. Buddhist devotees from across the globe have arrived in this Himalayan region of Ladakh to attend the “Kalachakra” or Wheel of Time initiations by the Dalai Lama that began Thursday. (Photo by Tsering Topgyal/AP Photo) 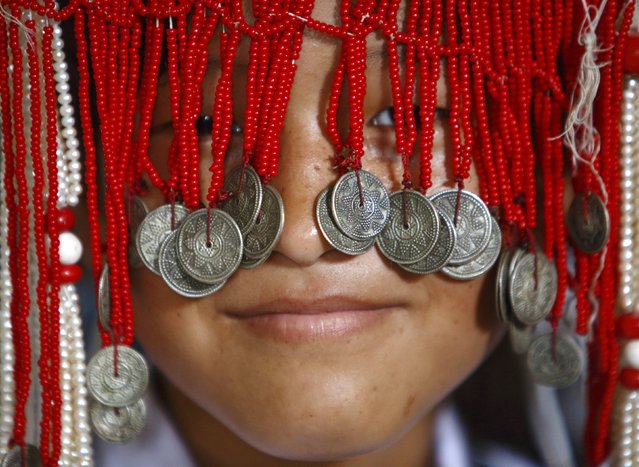 A girl dressed in traditional attire participates in celebrations on the 79th birthday of the Dalai Lama in Kathmandu July 6, 2014. Nepal ceased issuing refugee papers to Tibetans in 1989 and recognizes Tibet to be a part of China. (Photo by Navesh Chitrakar/Reuters) 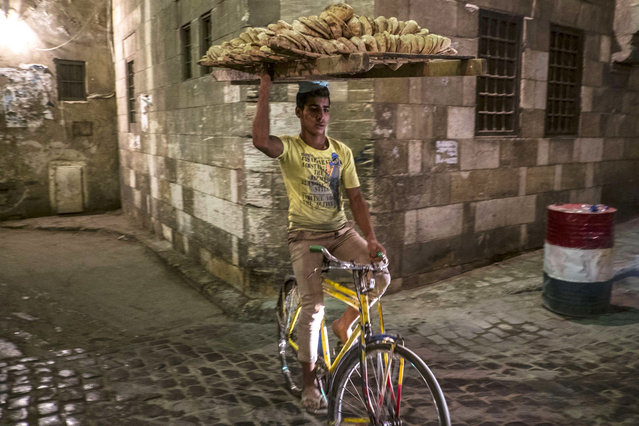 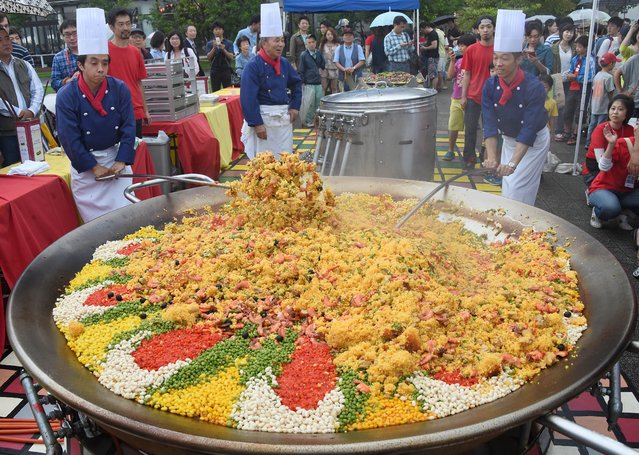 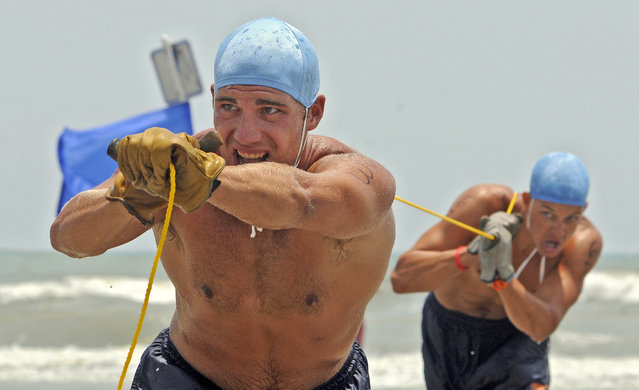 North Myrtle Beach lifeguards Luke Fender, left, and Dylan McCann drag the rope back in during the Landline Rescue Race in the South Atlantic Lifesaving Association regional competition Wednesday, July 9, 2014, in North Myrtle Beach, S.C. In this event the swimmer with the rescue buoy swims out to another team member who is the “victim”, then two other team members use the rope to pull in the victim and the rescue swimmer. (Photo by Charles Slate/AP Photo/The Sun News) 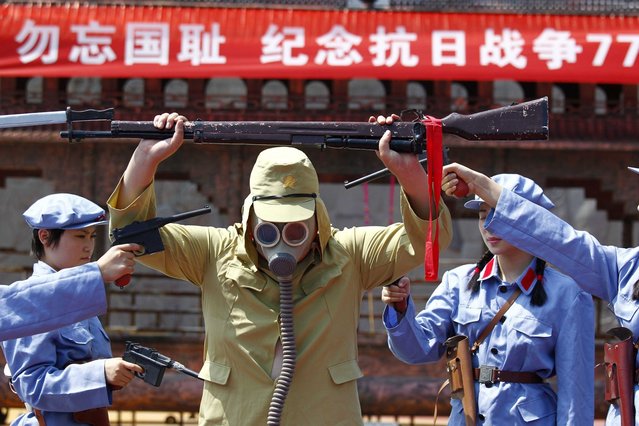 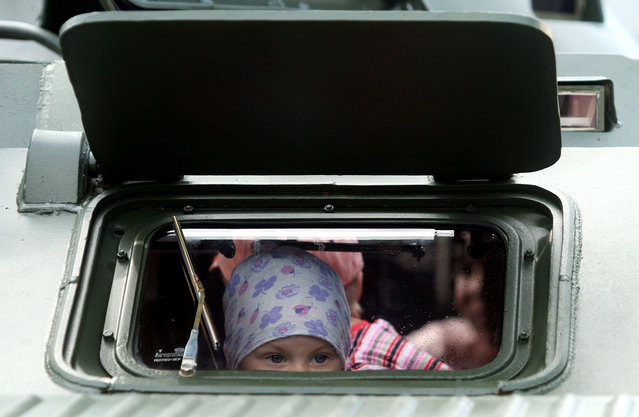 A little girl looks through a window of an armoured vehicle displayed at the MILEX-2014 arms and military equipment exhibition in Minsk on July 9, 2014. (Photo by Sergei Gapon/AFP Photo) 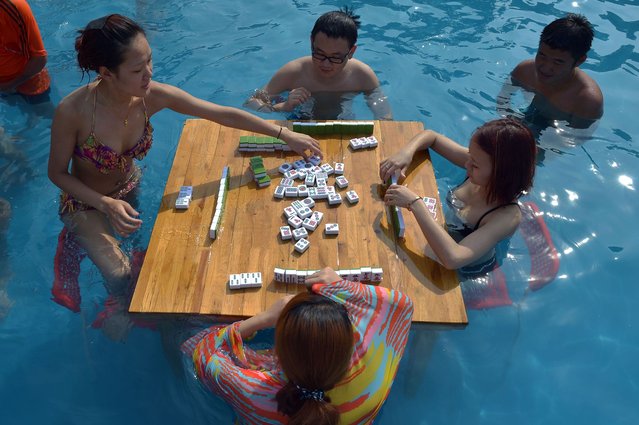 This photo taken on July 9, 2014 shows people playing mahjong as they cool off in a pool inside a waterpark in southwest China's Chongqing municipality. Meteorological department in Chongqing issued an orange alert for high temperature, as the highest temperature rose to more than 37 degrees Celsius and temperature for certain area topped 40 degrees Celsius. (Photo by AFP Photo) 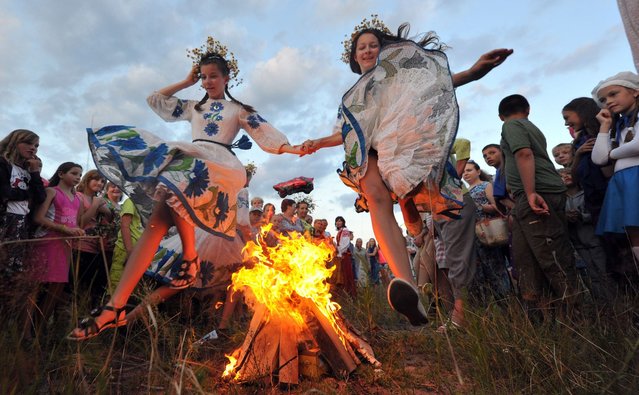 Wearing traditional Belarus costumes girls jump over a bonfire as they celebrate the Ivan Kupala night, an ancient heathen holiday, held in the countryside near the town of Turov, some 260 km southwest of the capital Minsk, on July 6, 2014. People celebrate Kupala Night with bonfires that last throughout the night with some leaping over the flames as it is believed that the act of jumping over the bonfire cleanses people of illness and bad luck. (Photo by Viktor Drachev/AFP Photo) 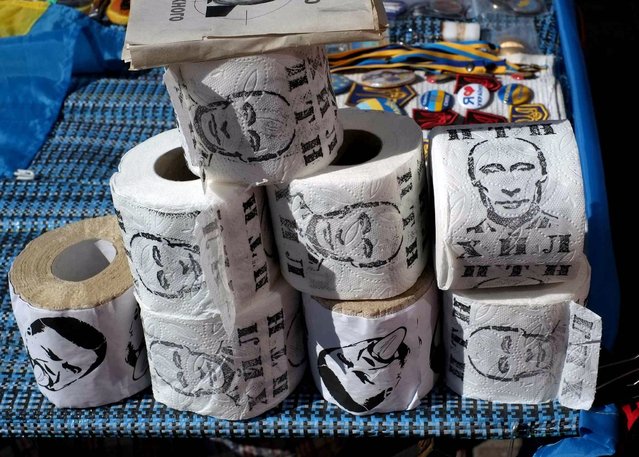 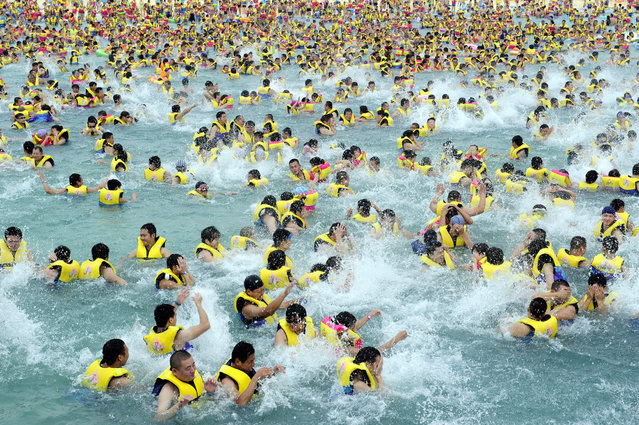 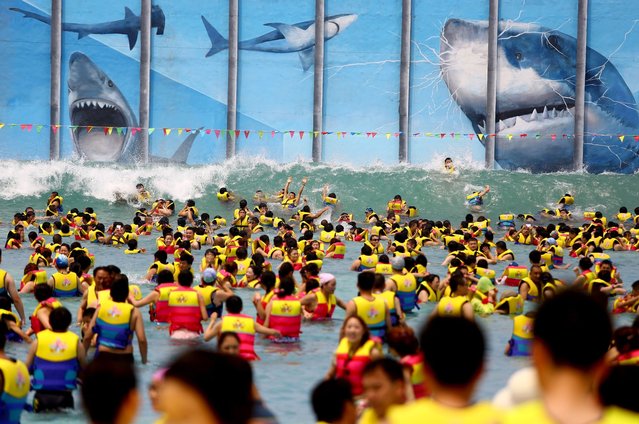 Huge crowds of people play at THEBES Happiness Water World during a continuous high temperature on July 5, 2014 in Shaanxi, Xi'an province of China. (Photo by ChinaFotoPress/ChinaFotoPress via Getty Images) 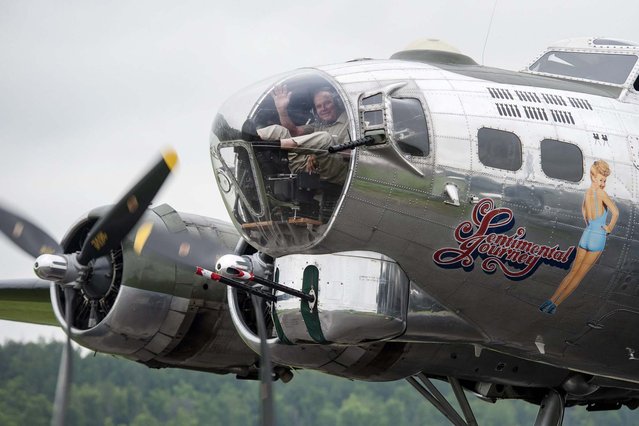 Roger Hadfield, father of Canadian astronaut Chris Hadfield, waves from the bombardier's seat after “Sentimental Journey”, a Second World War B-17 Flying Fortress, lands at Gatineau Executive Airport in Gatineau, Quebec, on Monday, July 7, 2014. The Royal Canadian Air Force flew the B-17 out of RCAF Station Rockcliffe in Ottawa, delivering mail to Canadian soldiers, sailors and airmen overseas. Hadfield flew the B-17 in the 1960s to conduct aerial mapping. (Photo by Justin Tang/AP Photo/The Canadian Press) 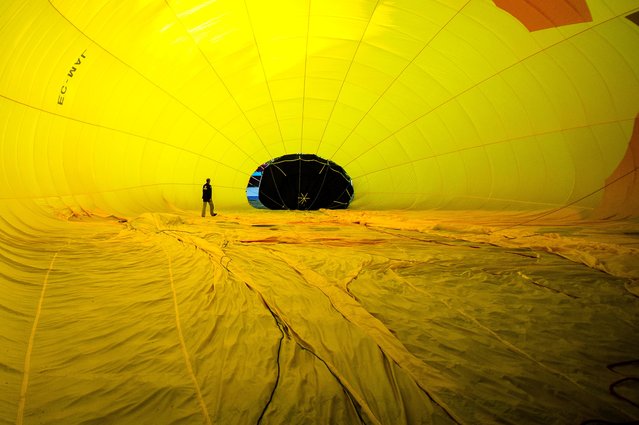 A hot air balloon is inflated at the European Balloon Festival in Igualada, Spain, on Jule 10, 2014. The early morning flight of over 30 balloons was shorter than expected due to windy weather. (Photo by David Ramos/Getty Images) 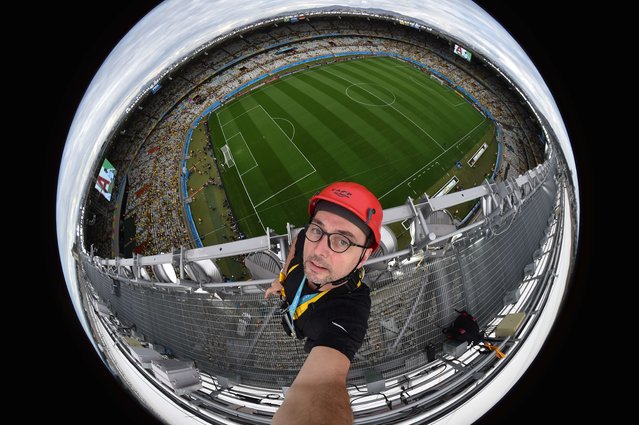 Fisheye picture showing AFP Photographer Francois-Xavier Marit standing point on the catwalk of the roof of Belo Horizonte stadium during the semi-final football match between Brazil and Germany at The Mineirao Stadium in Belo Horizonte during the 2014 FIFA World Cup on July 8, 2014. (Photo by Francois Xavier Marit/AFP Photo) 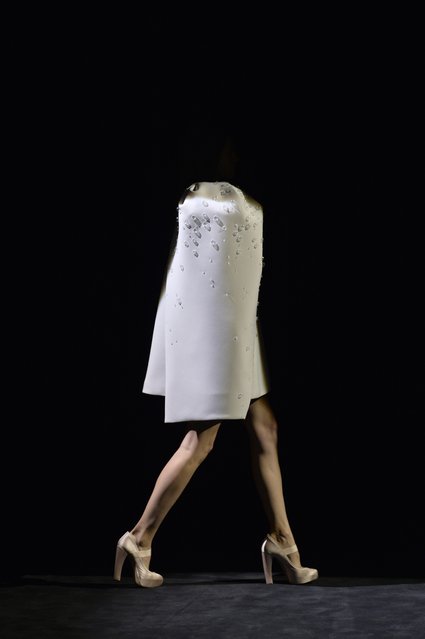 Dark hair and dark lighting conceal the head of a model presenting a creation by Dice Kayek during the 2014/2015 haute couture fall-winter collection fashion show in Paris on July 10, 2014 in Paris. (Photo by Miguel Medina/AFP Photo)

Workers work at the “Gulliver” sculpture on July 8, 2014 in the amusement park “Gulliver's World” in Pudagla, on the island of Usedom, Germany. The sculpture of “Gulliver in Lilliput” is 36 meters long and 17 meters wide, which is one of the largest of its kind in Europe. The sculpture will be shown from July 11, 2014. (Photo by Stefan Sauer/AFP Photo/DPA) 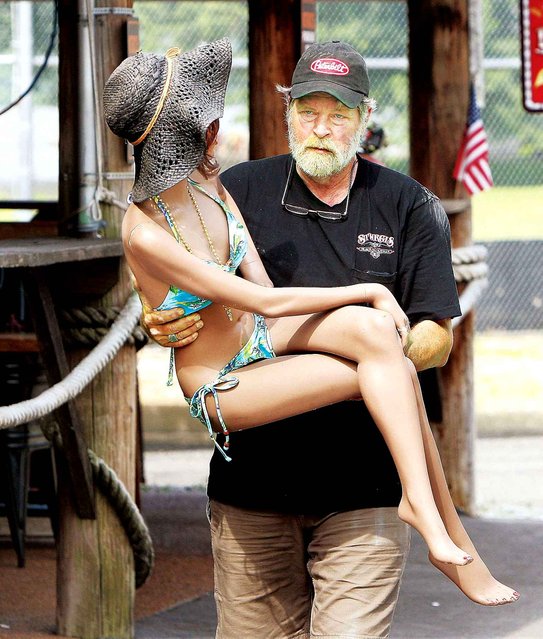 Volunteer Dan Knoll carries one of the most important things to safety from the Hawg Pit BBQ Barn on West Main Street in Grafton, Ill., Monday July 7, 2014 as floodwaters neared the back of the business. Several female mannequins had to be “rescued” along with all of the other items in the bar Monday. Several more feet of floodwater are currently predicited before a crest on Saturday. Grafton sits at the confluence of the Illinois and Mississippi rivers. (Photo by John Badman/AP Photo/The Telegraph) 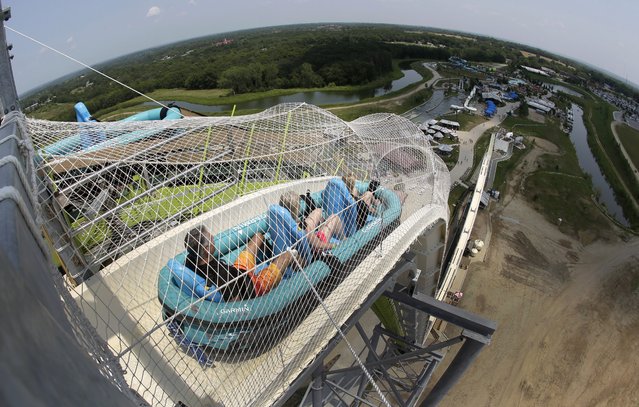