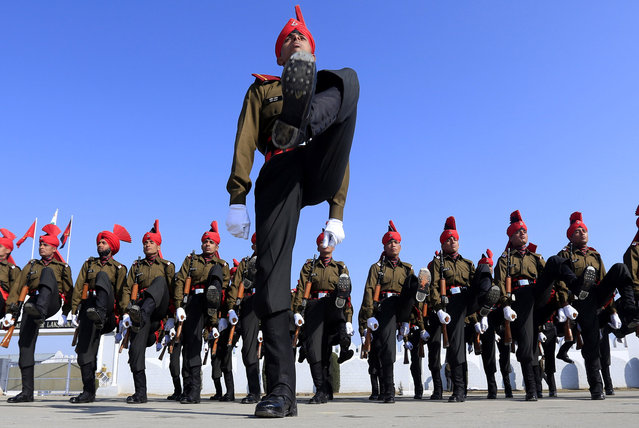 Newly graduated soldiers of the Jammu and Kashmir Light Infantry march during their commencement parade at a military base on the outskirts of Srinagar, India, Saturday, March 8, 2014. The soldiers will join Indian Army fighting separatist Islamic guerrillas in Kashmir to end an insurgency that started in 1989. (Photo by Dar Yasin/AP Photo) 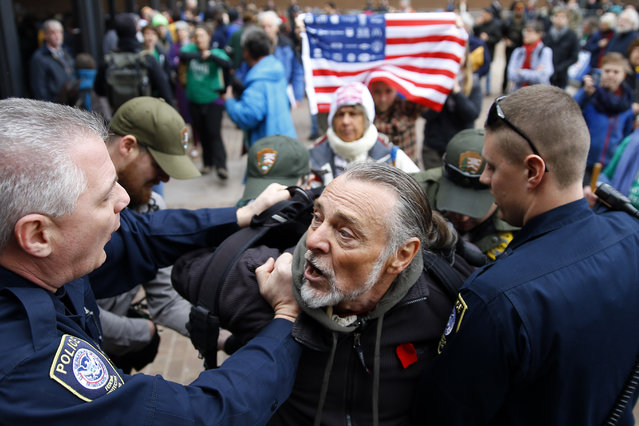 Police detain a protester demonstrating in opposition to the proposed Keystone XL oil pipeline, Monday, March 10, 2014, outside the Federal Building in Philadelphia. The protestors say the pipeline would contribute to global warming. (Photo by Matt Rourke/AP Photo) 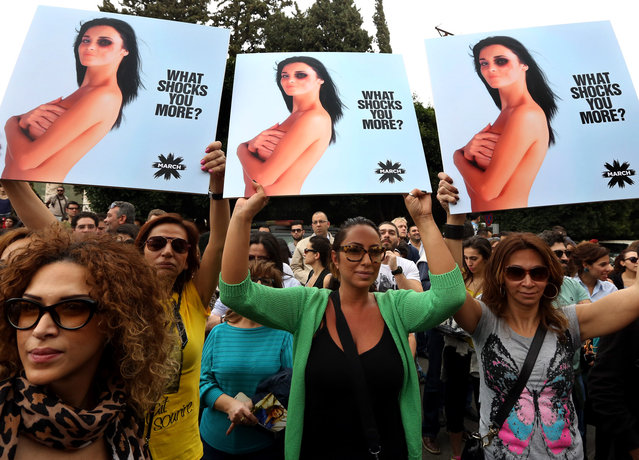 Lebanese women hold posters to mark International Woman's Day during a rally of thousands demanding that parliament approves a law that protects women from domestic violence, in Beirut, Lebanon, Saturday, March. 8, 2014. Although Lebanon appears very progressive on women rights compared to other countries in the Middle East, domestic violence remains an unspoken problem and the nation's parliament has yet to vote on a bill protecting women's rights nearly three years after it was approved by the Cabinet. (Photo by Bilal Hussein/AP Photo) 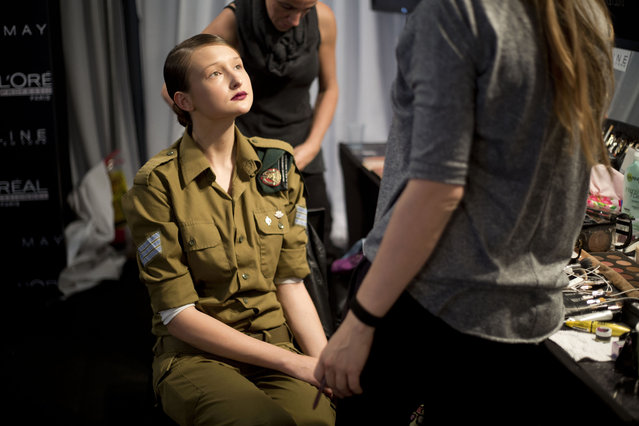 An Israeli model, who serves in the military, wears her uniform in the makeup chair before her turn on the catwalk a show by Israeli designer Dorin Frankfurt at the Tel Aviv fashion week, Israel, Tuesday, March 11, 2014. (Photo by Ariel Schalit/AP Photo) 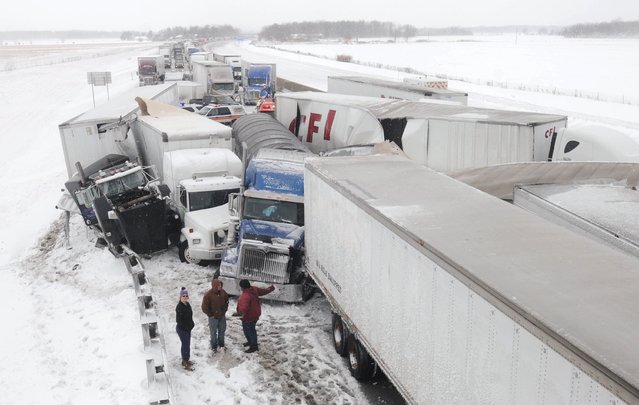 Truck drivers talk amongst themselves at the scene of an accident on the Ohio Turnpike northeast of Clyde, Ohio after more than 50 vehicles crashed, Wednesday, March 12, 2014. (Photo by Jonathon Bird/AP Photo/Fremont News-Messenger) 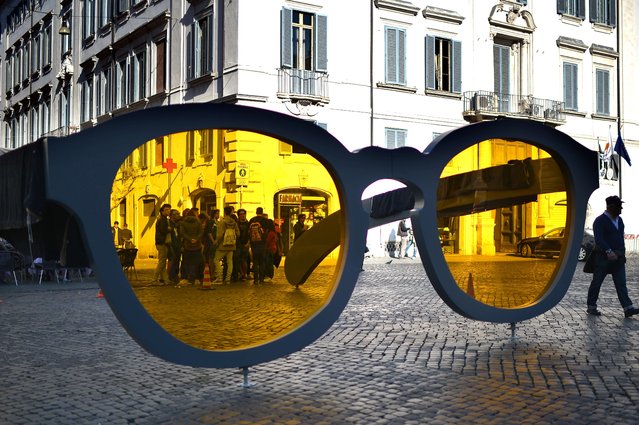 Pedestrians pass by giant sunglasses on Piazza Farnese in downtown Rome as part of an advertising campaign on March 12, 2014. (Photo by Gabriel Bouys/AFP Photo) 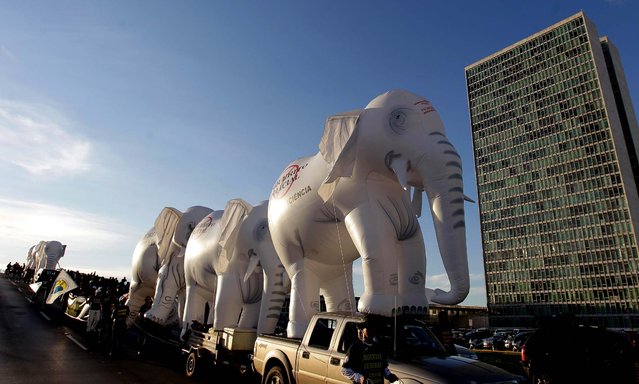 Federal police parade white elephant dolls symbolizing public waste as they demand higher salaries and better career opportunities in Brasilia, Brazil, Wednesday, March 12, 2014. The police are threatening to go on strike during the upcoming World Cup soccer tournament if their demands are not met. (Photo by Eraldo Peres/AP Photo) 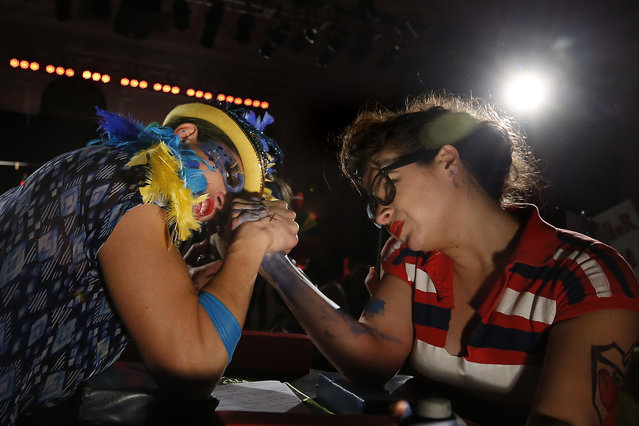 Emilia Garcia (L) competes against Avery Ferguson at the Chicago League of Lady Arm Wrestlers event in Chicago, March 9, 2014. The event was put on to raise money for the Sideshow Theatre Company and for charity. (Photo by Jim Young/Reuters) 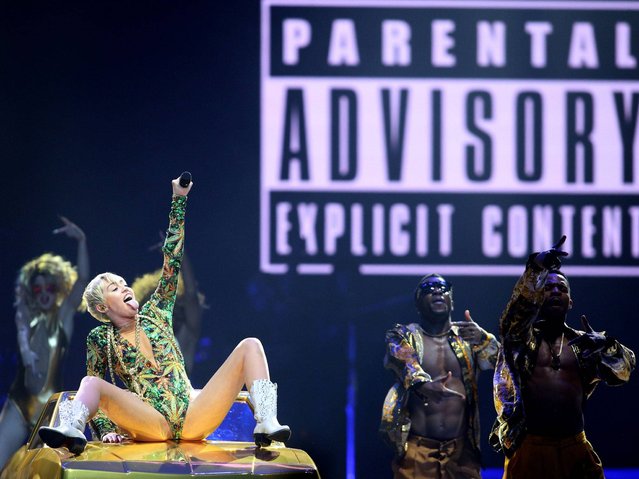 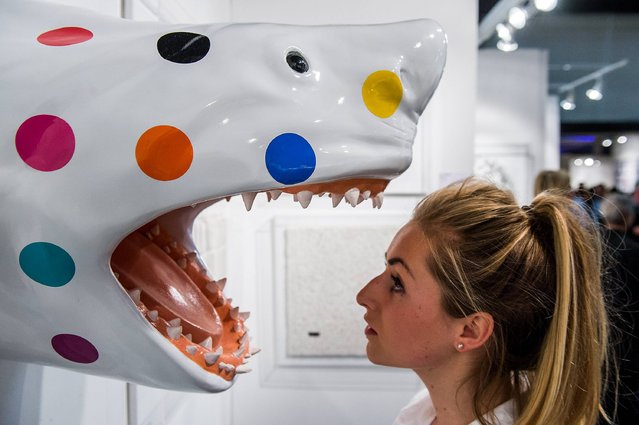 Handout photo dated 12/03/14 issued by the Affordable Art Fair of a visitor viewing The great white artist by Finn Stone, as part of the Affordable Art Fair which opened in Battersea Park, London and runs until 16 March, offering visitors a chance to purchase work from over 100 galleries at prices between £40 and £4,000. (Photo by Guy Bell/PA Wire) 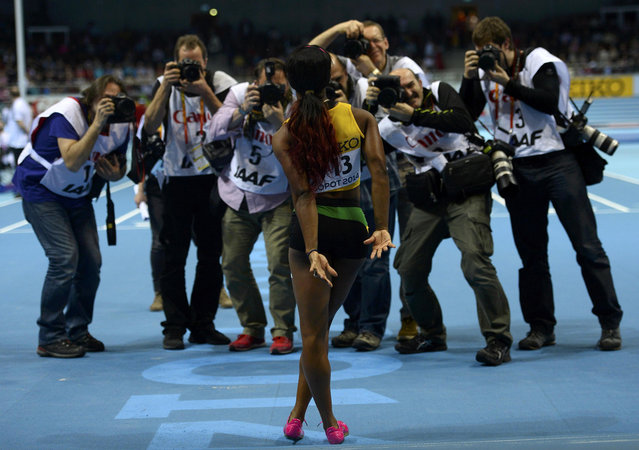 Jamaica's Shelly-Ann Fraser-Pryce poses for photographers after winning the women's 60m final in the world indoor athletics championships at the ERGO Arena in Sopot March 9, 2014. (Photo by Dylan Martinez/Reuters) 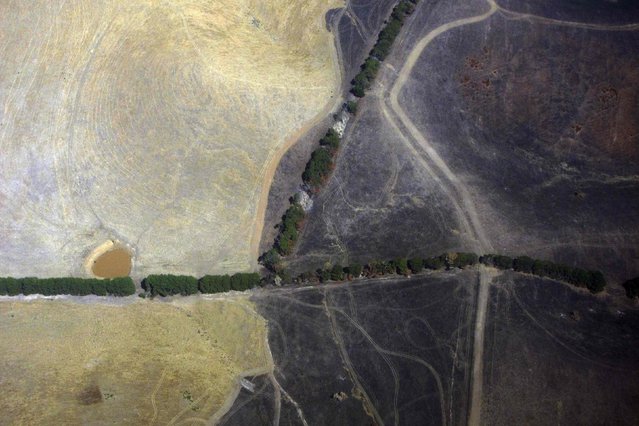 A small dam (L) containing water is seen in a dry paddock next to another that has been affected by a recent fire on the outskirts of Melbourne March 12, 2014. Australia endured its hottest year on record in 2013, the Bureau of Meteorology said earlier this year, with average temperatures 1.2 degree Celsius (34.2 degrees Fahrenheit) above the long-term average of 21.8 degree Celsius (71.2 degrees Fahrenheit), breaking the previous record set in 2005. (Photo by David Gray/Reuters) 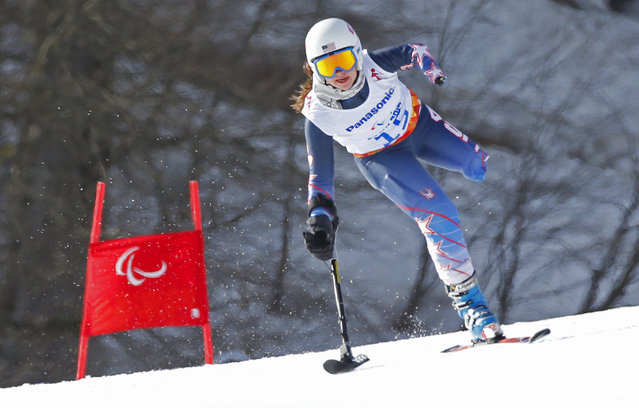 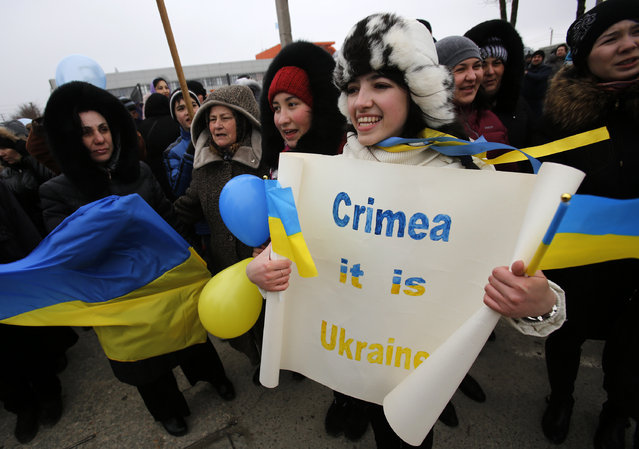 Crimean Tatars shout slogans during the pro-Ukraine rally in Simferopol, Crimea, Ukraine, Monday, March 10, 2014. Russian President Vladimir Putin on Sunday defended the separatist drive in the disputed Crimean Peninsula as in keeping with international law, but Ukraine's prime minister vowed not to relinquish “a single centimeter” of his country's territory. The local parliament in Crimea has scheduled a referendum for next Sunday. (Photo by Darko Vojinovic/AP Photo) 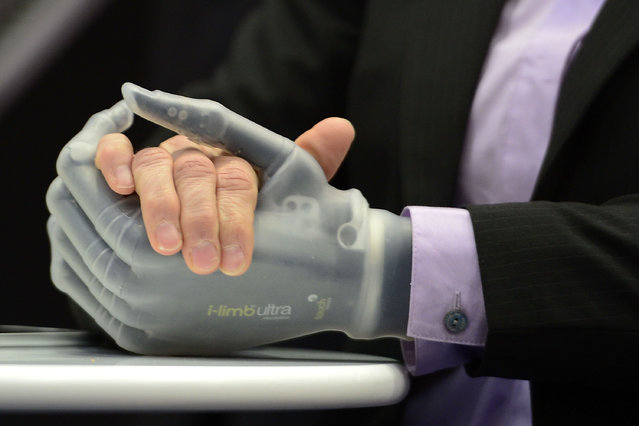 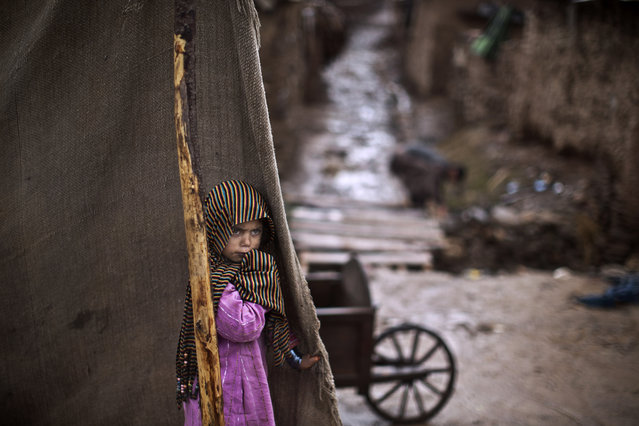 An Afghan refugee girl, looks at men trying to clear sewage paths so rainwater can drain, in an attempt to avoid flooding during a heavy rainfall, in a poor neighborhood on the outskirts of Islamabad, Pakistan, Tuesday, March 11, 2014. For more than three decades, Pakistan has been home to one of the world’s largest refugee communities: hundreds of thousands of Afghans who have fled the repeated wars and fighting their country has undergone. (Photo by Muhammed Muheisen/AP Photo) 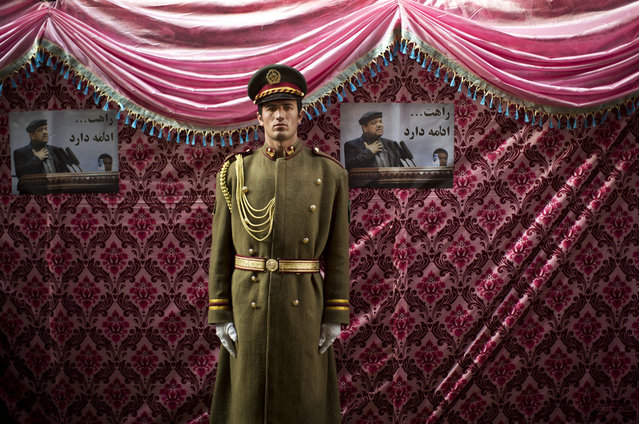 An Afghan honor of guard stands next to pictures of late Afghan Vice President Field Marshal Mohammed Qasim outside his house in Kabul, Afghanistan, Monday, March 10, 2014. Afghanistan's influential Vice President Fahim, a leading commander in the alliance that fought the Taliban who was later accused with other warlords of targeting civilian areas during the country's civil war, died March 9, 2014. He was 57. (Photo by Anja Niedringhaus/AP Photo) 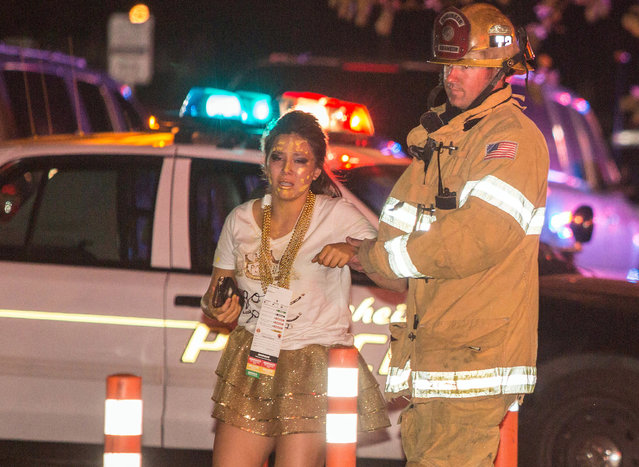 A firefighter assists an injured student after a stage collapsed during a student event at Servite High School in Anaheim, Calif., Saturday, March 8, 2014. Authorities said 30-40 people were taken to hospitals with mainly minor injuries. (Photo by Kevin Warn/AP Photo) 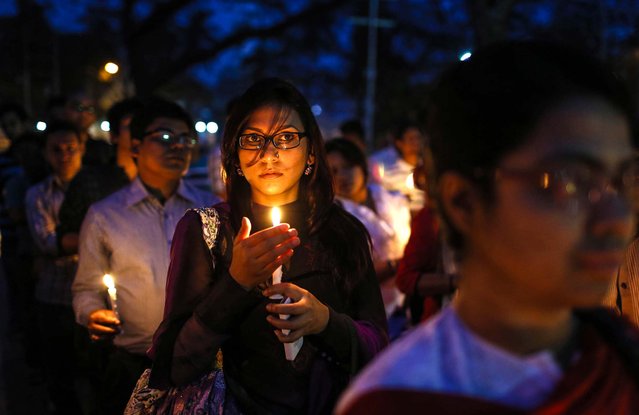 People hold candles as they pay homage to the victims of the 2011 earthquake and tsunami in Japan, during a ceremony in Dhaka, Bangladesh, on March 10, 2014. Tuesday marks the third anniversary of the earthquake, tsunami and nuclear disaster known as 3.11 that killed 15,884 people and left 2,636 unaccounted for in vast areas of its northern coast. (Photo by A. M. Ahad/Associated Press) 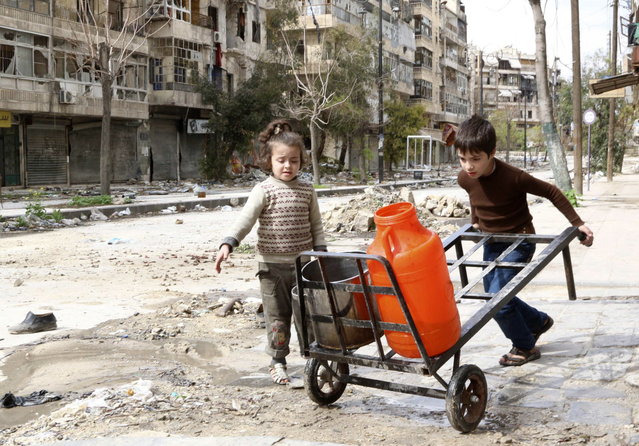 Children push a cart with water containers along a damaged street in old Aleppo March 11, 2014. The number of children affected by the civil war in Syria has more than doubled over the past year, with hundreds of thousands of young Syrians trapped in besieged parts of the country, the United Nations Children's Fund said. (Photo by Mahmoud Hebbo/Reuters) 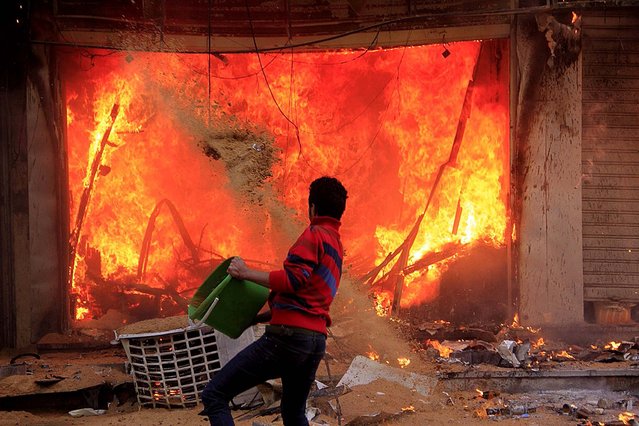 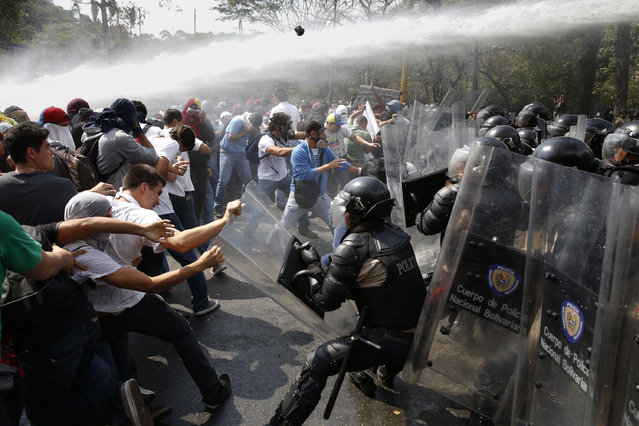 Anti-government protesters clash with police during a protest in Caracas March 12, 2014. Supporters and foes of Venezuelan President Nicolas Maduro took to the streets of Caracas again on Wednesday a month after similar rival rallies brought the first bloodshed in a wave of unrest round the OPEC member nation. Red-clad sympathizers of Maduro's socialist government held a “march for peace” while opponents wearing white gathered to denounce alleged brutality by security forces during Venezuela's worst political troubles for a decade. (Photo by Carlos Garcia Rawlins/Reuters) 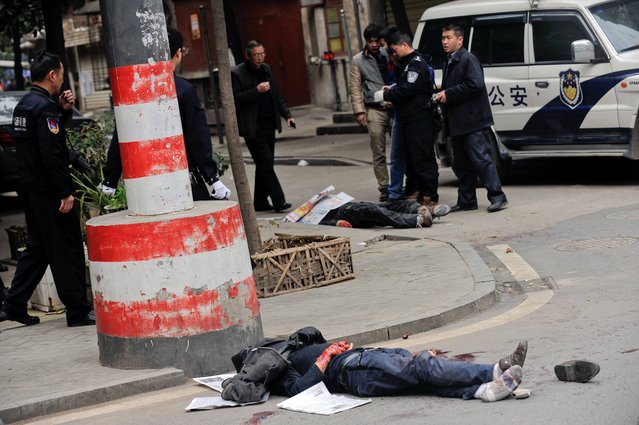 Bodies of victims lie on the ground as policemen investigate the crime scene after a knife attack in Changsha, in southern China's Hunan province, Friday, March 14, 2014. A fight between two food stall owners at a market in southern China on Friday left five people hacked to death and one person fatally shot by police, authorities said. The identity of the food stall owners was not immediately clear. (Photo by AP Photo/STR) 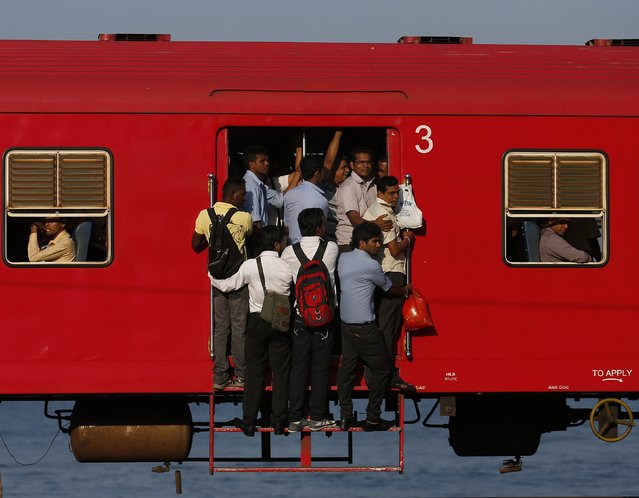 People hang onto a crowded local passenger train as they travel to Colombo March 11, 2014. (Photo by Dinuka Liyanawatte/Reuters) 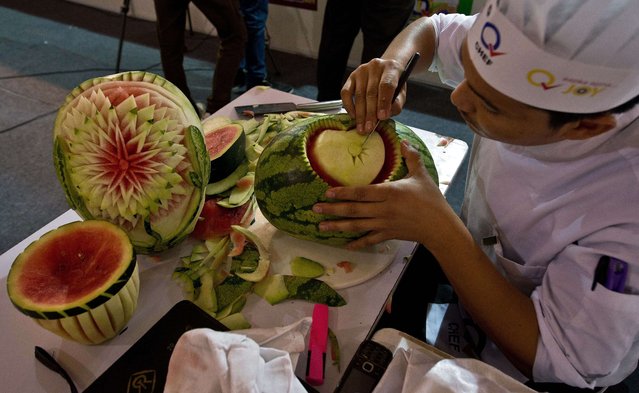 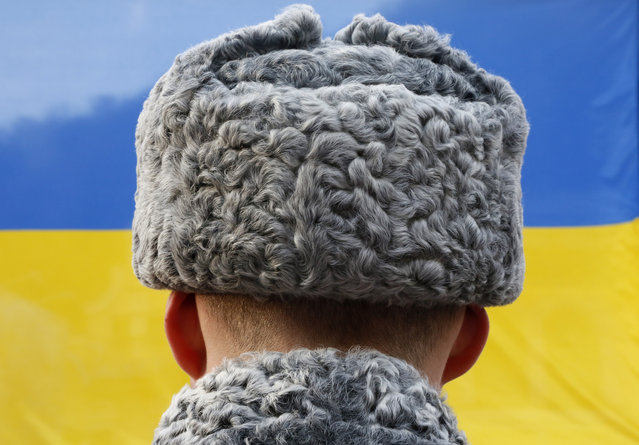 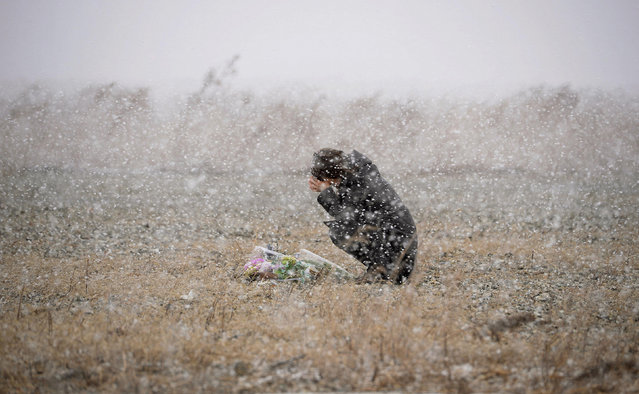 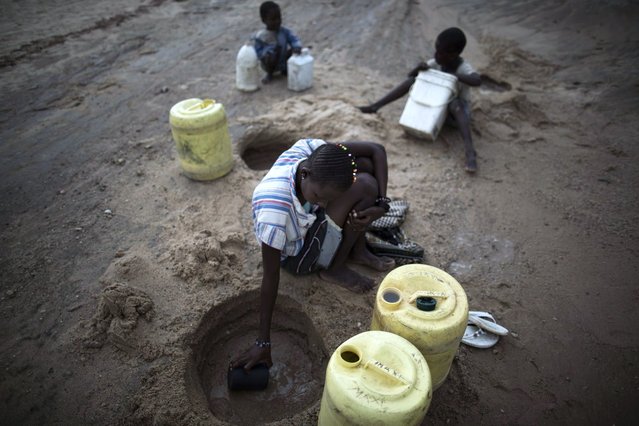 A Turkana woman scoops water from a dry river bed in Nasder, north of Lodwar in the Turkana region, on March 13, 2014. A first downpour relieved pastoralists in the drought stricken Kenyan Turakana region after a twelve month span that pushed livestocks and communities to the brink of another looming humanitarian crisis. (Photo by Marco Longari/AFP Photo) 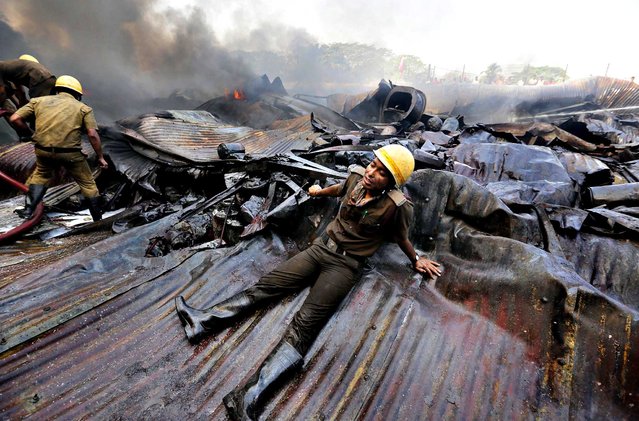 An exhausted firefighter rests on debris as they battle to extinguish a huge fire in a paint factory in Howrah, 30 km west of Calcutta, Eastern India, 12 March 2014. A major fire broke out at a factory of Shalimar Paints Limited in Howrah early morning. According to police and media reports, 25 fire engines fought for close to six hours to extinguish the blaze. Noboby was injured. (Photo by Piyal Adhikary/EPA) 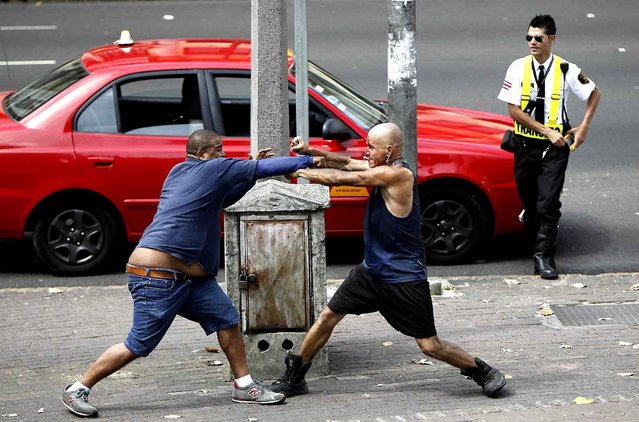