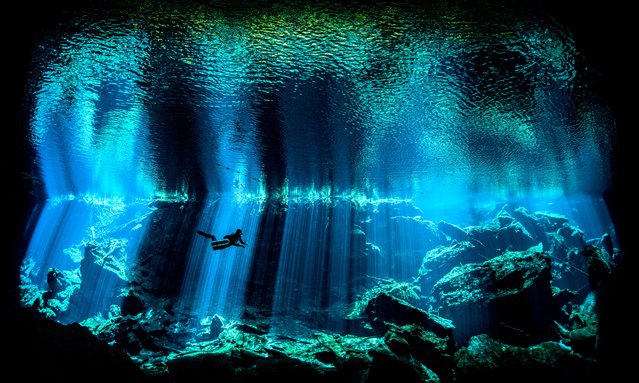 British underwater photographer of the year – winner. Out of the Blue by Nick Blake (UK). Location: Yukatán peninsula, Kukulkan. Kukulkan, one of the spectacular cenotes on Mexico’s Yucatán peninsula, is noted for its otherworldy light as sunbeams penetrate the darkness of the cave. Blake captured this diver in the centre of one of the beams. (Photo by Nick Blake/UPY2017) 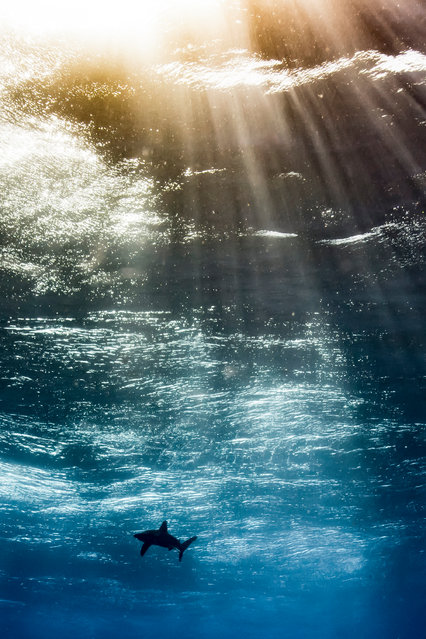 Up-and-coming underwater photographer of the year – winner. Oceanic in the Sky by Horacio Martinez (Argentina). Location: the Red Sea. Oceanics range across entire oceans in tropical and subtropical waters and feature on the IUCN endangered list. As the judge noted of the Red Sea, Martinez has “realised its dramatic effect extremely well and used it to contrast the small shark in a big, blue, lonely world”. (Photo by Horacio Martinez/UPY2017) 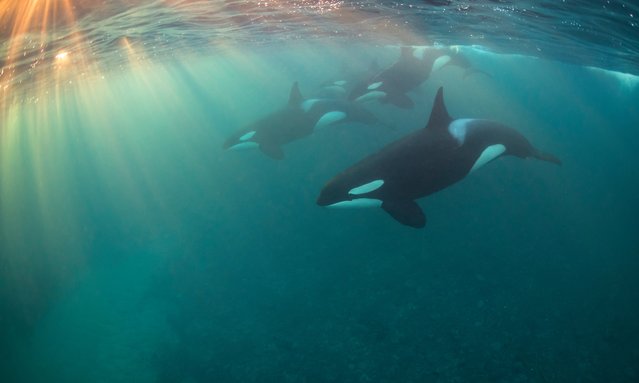 Most promising underwater photographer of the year – winner. Orca Pod by Nicholai Georgiou (UK). Location: Tromsø, Norway. Georgiou got this shot during a winter sunset, with the water down to just 5Cº. As an envious judge pointed out, “Most underwater photographers would be happy to get a shot of a single killer whale, but Nicholai had the composure not to panic and time the shot perfectly as a pod of killer whales passed by heading into the setting sun. I’m jealous”. (Photo by Nicholai Georgiou/UPY2017) 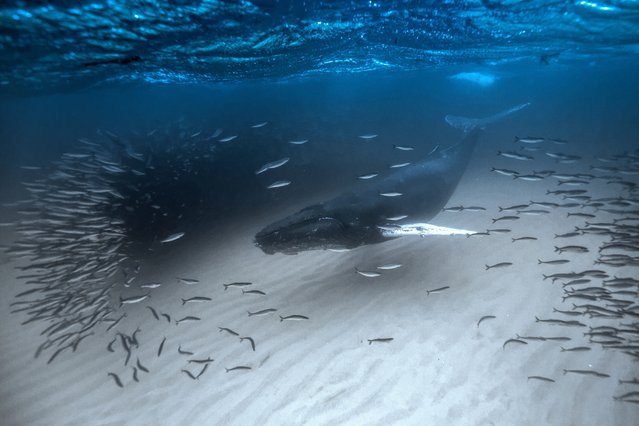 Wide-angle category – highly commended. Frozen Hunting by Fabrice Guerin (France). Location: Andenes, Norway. This humpback was a surprise to Guerin, who followed a school of herring in water temperatures down to 2Cº. He was looking for orcas, as the whales tend to push herring towards the shore here. The 20-minute wait was rewarded with an unexpected encounter. (Photo by Fabrice Guerin/UPY2017) 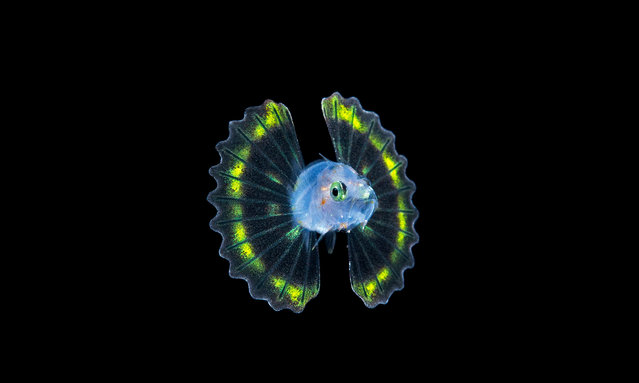 Macro category – commended. Larval Lionfish by Steven Kovacs (USA). Location: Palm Beach, Florida. Kovacs was on the lookout for tiny plankton and larval creatures on a black water drift dive when this rare tiny lionfish in its early larval stage flared its fins. The size and speed of such tiny animals makes them difficult to capture. “I can’t help but feel I should have fought more for this exquisite image to be pushed a little higher up the order”, reflected the judge. (Photo by Steven Kovacks/Ximena Olds Photography/UPY2017) 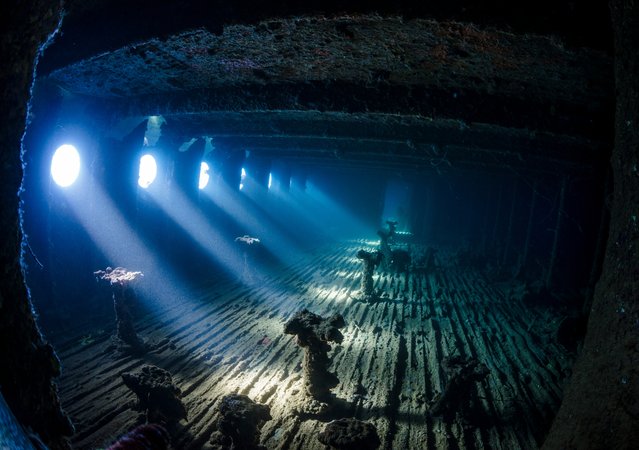 Wrecks category – highly commended. The Haunted Room by Nadya Kulagina (Kazakhstan). Location: the Red Sea. The stillness of this underwater scene flooded with light captured the judges’ attention. It’s “what this room might have looked like when the Umbria was still intact and plying the seas”, thought Kulagina. The wreck lies on its side so she flipped the camera vertically to get the shot. (Photo by Nadya Kulagina/UPY2017) 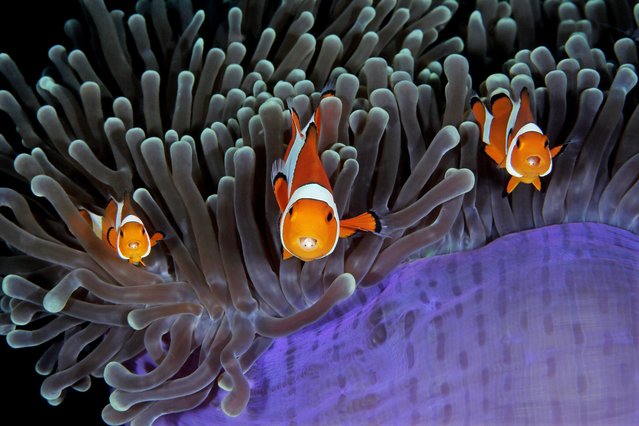 Behaviour category – winner. Your Home and My Home by Qing Lin (Canada). Clownfish must be among the most photographed of all sea creatures. But looking closer, Lin noticed parasitic isopods in the mouths of these little fish. The judge appreciated the whole scene: “Six eyes all in pin-sharp focus, looking into the lens of the author ... this was one of my favourite shots of the entire competition”. (Photo by Qing Lin/UPY2017) 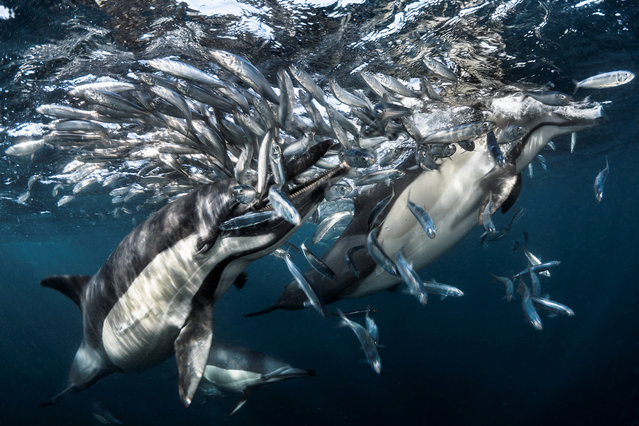 Behaviour category – highly commended. Dolphins Hunting by Greg Lecoeur (France). Location: Port Saint Johns, South Africa. Sardines, a crucial part of the food chain for many marine animals, are in sharp decline. During their migration along the coast, many predators work together to hunt them but, Lecoeur says, “the action is more and more unpredictable”. He spent several days on the ocean to have just one chance and got this shot. As the judge put it: “Dolphins with sardines spilling out of their mouths. What more can you ask for?”. (Photo by Greg Lecoeur/UPY2017) 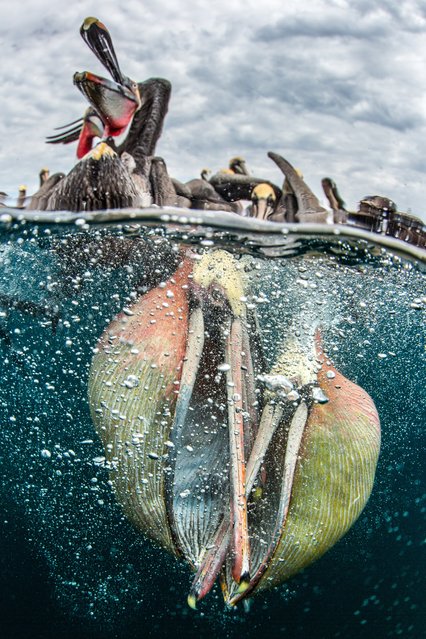 Behaviour category – commended. The Contenders by Simone Caprodossi (UAE). Location: Bahia Magdalena, Mexico. Another surprise subject for this photographer who went to Bahia Magdalena to photograph blue and mako sharks. “We stopped by a small beach where fisherman land their catch”. The snappers hung off the side to shoot the pelicans diving for bait and photographic pickings were so rich they abandoned the shark shoot. (Photo by Simone Caprodossi/UPY2017) 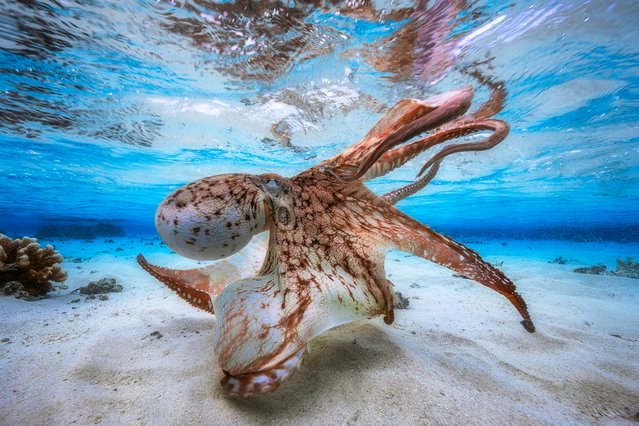 Underwater photographer of the year – winner. Dancing Octopus by Gabriel Barathieu (France). Location: Island of Mayotte, off the coast of south-east Africa. “Balletic and malevolent”, one judge said of this octopus, hunting in a lagoon. Barathieu waited until spring tides when there was just 30cm of water on the flats and plenty of light in the shallows. (Photo by Gabriel Barathieu/UPY2017)
Edit Del
16 Feb 2017 00:06:00, post received 0 comments
Publication archive:
←   →
Popular tags:
All tags
Last searches: