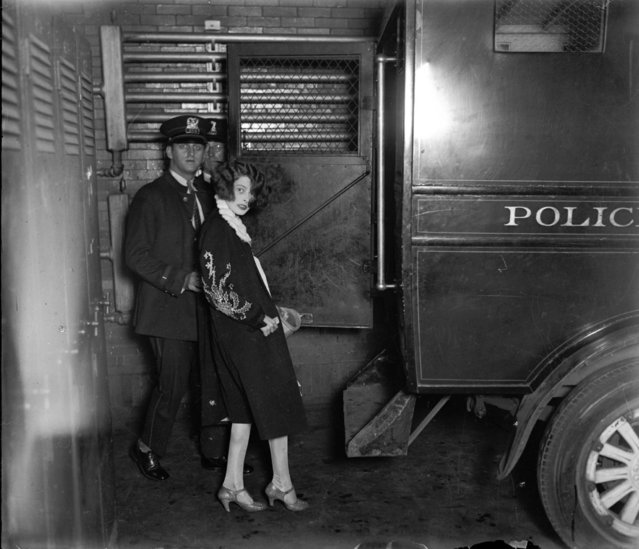 Gertrude “Billie” Murphy, 22, is brought in for questioning in the murder case of Michael Stopec, who was shot and killed in an apartment hotel, circa July 1927. Murphy had been friends of the married Stopec and his suspected killer Henry Guardino, 31. It is said that Stopec and Guardino were “bitter rivals for the favor of Billie” and that Murphy had tired of Guardino and was going to stay with Stopec. Murphy was also married to a man in the Joliet penitentiary. (Photo by Chicago Herald & Examiner Historical Photo) 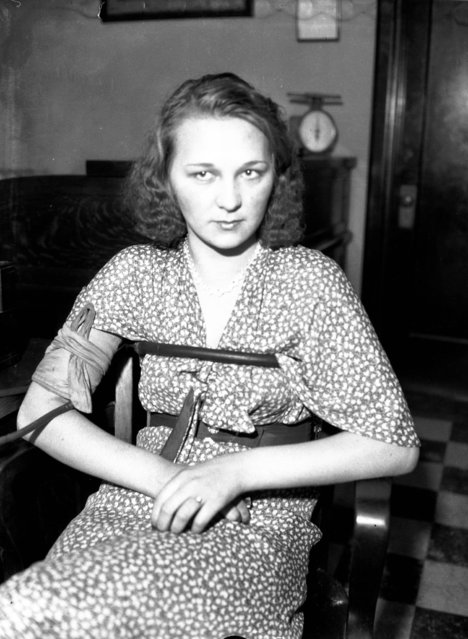 Della Broderick is the sister-in-law of Jack Lawrence who shot and killed a guard while Lawrence was serving time in the county jail on June 22, 1932. Lawrence failed to find a way out of the jail and shot and killed himself as guards surrounded him. Lawrences' wife Olive was brought in for questioning along with her sister, Della Broderick, on June 24, 1932, on charges that one of the two women had smuggled the pistol into the jail. Olive Lawrence visited Jack on the day of the shootings and Della Broderick visited several days prior to Olive and brought with her a fruit basket for Jack. Lawrence was in jail for robbery and was about to go on trial for killing policeman John Nerad of Cicero. (Photo by Chicago Tribune Historical Photo) 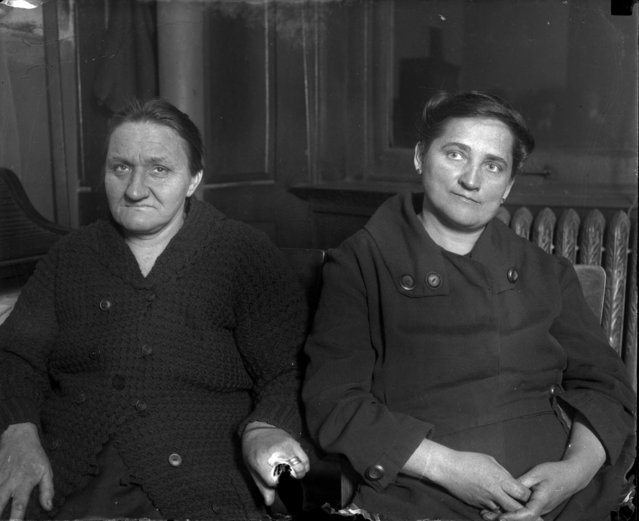 Tillie Klimek, right, and her cousin Nellie Stermer-Koulik, left, were accused of poisoning 20 husbands, children and friends between the two of them with arsenic poisoning. Fourteen of the 20 died and six lived. Klimek, who had killed her first three husbands, was convicted and sentenced to life in prison on March 31, 1923 for the death of her third husband who, according to the Chicago Tribune, had in him “enough arsenic to kill four men”. Klimek was described by the Chicago Tribune as the "Poison Widow" and the two cousins were called high priestesses of the Bluebeard clique. “We have here a woman of average intelligence, a modern housewife and a good cook. When she is among women she is affectionate and it is said, she is the most popular woman in the jail. Yet, the testimony showed, cold bloodedly, without feeling or remorse, she killed three of her husbands and attempted to kill the fourth”, said Judge Marcus Kavanagh as he sentenced her to life in prison. Stermer-Koulik was found not-guilty. (Photo by Chicago Tribune Historical Photo) 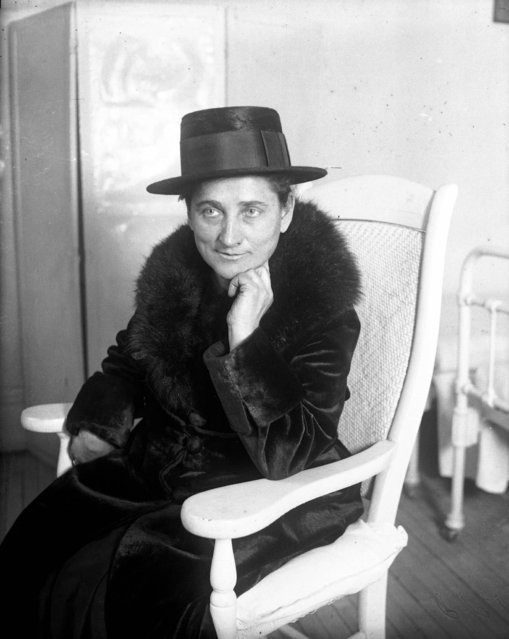 Mrs. Tillie Klimek, 50, was found guilty and sentenced to life in prison on March 31, 1923 for poisoning her third husband, Frank Kupczyk, to death and sending her fourth, Joseph Klimek, to the hospital with arsenic poisoning. Klimek was described by the Chicago Tribune as the “Poison Widow” and the “High priestess of the 'Bluebeard clique'” for the poisoning of over 20, including husbands, relatives and friends. Fourteen of those poisoned died, six lived, and Klimek was only charged with one of the murders. The Tribune called Klimek a “squat little Polish storekeeper” who confessed to killing her first three husbands and one sweetheart with arsenic. A neighbor said of Klimek's third husband, “after his death, it is said, she played dance music on a phonograph in the room in which the body lay”. Klimek gathered insurance payouts from each of her husbands' deaths. (Photo by Chicago Tribune Historical Photo) 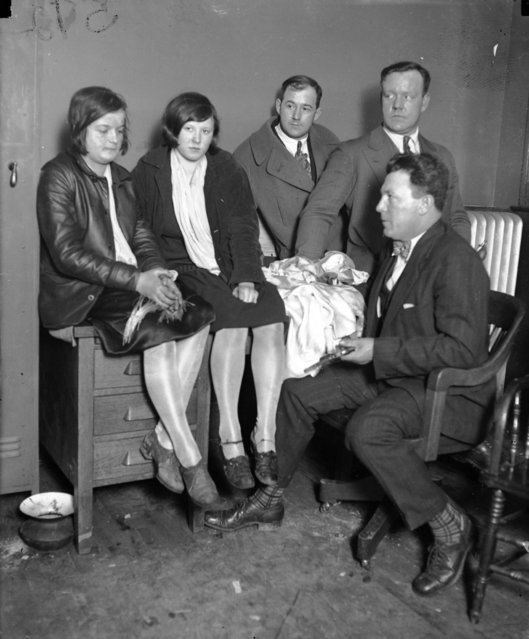 Girl bandits Jean Buttick, 15, and Anna Varich, 16, were caught red-handed looting the bungalow of Louis Oehler at 6152 S. California Avenue on March 20, 1927. The Chicago Tribune reported “In the kitchen, as they seized her (Anna) she spilled rings, bracelets, beaded bags, and what not from every part of her clothes. When they shook her she literally dripped booty”. Police officers believe the two bandits had looted about a dozen other homes within the last two weeks. With Buttick and Varich are Charles Goss, Bert Harlem and Sgt. William H. Doyle (in chair) on March 20, 1927. (Photo by Chicago Tribune Historical Photo) 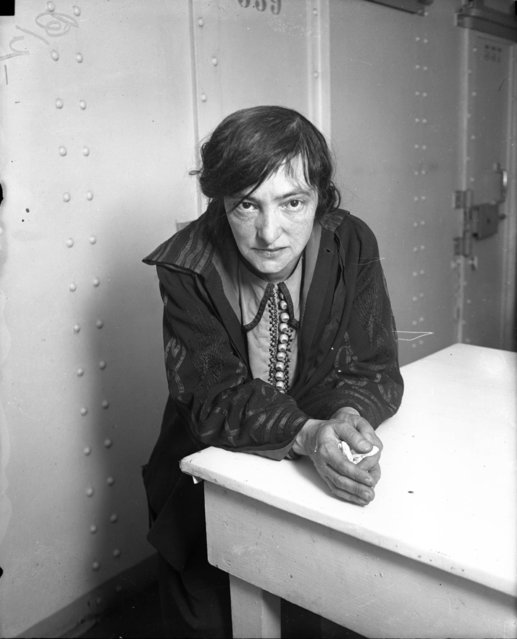 Mrs. Emily Strutynsky, a mild-mannered Ukrainian school teacher, walked into St. Michael the Archangel church, pulled a gun from her dress and killed the Rev. Father Basil Stetsuk on October 7, 1923. She claimed she had to kill the priest because he was a “such a bad leader of the Ukranians”. Strutynsky's husband, the Rev. Nicholas Strutynsky, was the former priest of the church and had been driven away to a church in Pennsylvania. She was to go with him, but planned the murder for weeks. Strutynsky spent four years at the Kankakee State Hospital, Department of the Criminally Insane before she slipped away July 9, 1927 and jumped in the river. (Photo by Chicago Tribune Historical Photo) 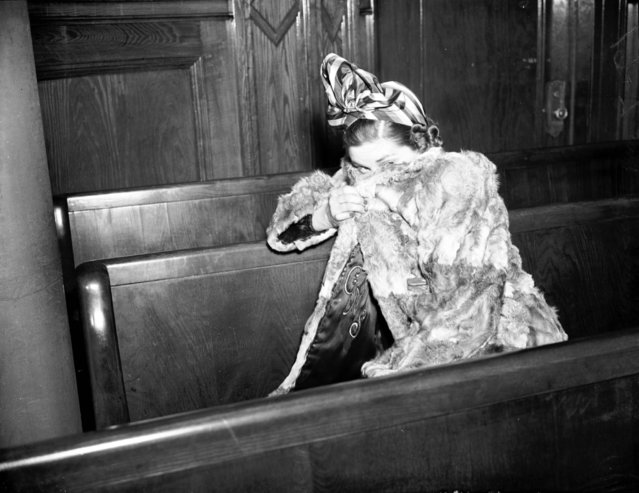 Grace Druggan, 26, the wife of notorious prohibition era beer baron Terry Druggan, is in court on March 7, 1941, to get her son Terrence Jr., 3, back from the elder Druggan. Druggan violated a custody agreement in effect since she filed for divorce that allowed Druggan to have the boy on weekends only. Druggen had refused to give him up the prior weekend, but returned him by way of a threat from the judge to hold him in contempt of court. The divorced Grace Druggan committed suicide five years later by jumping off Navy Pier in 1946. Terry died in 1954 at the age of 51 from his constant stomach uclers, asthma and heart troubles, according to the Chicago Daily Tribune. (Photo by Chicago Tribune Historical Photo) 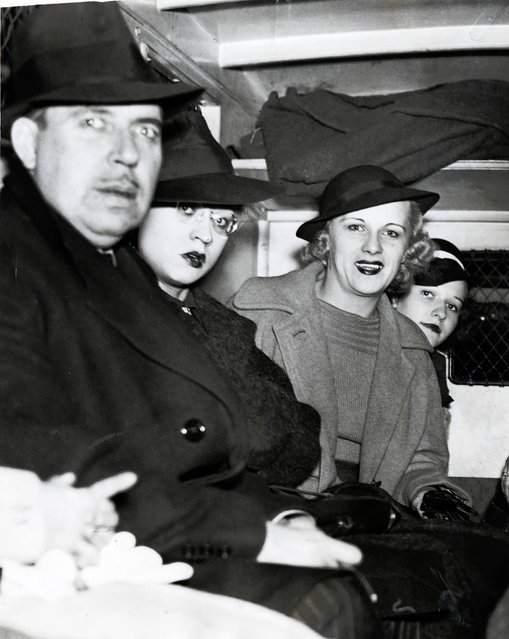 People arrested sit in back of a police wagon following a vice raid on the Rialto Theatre, October 17, 1937. Twenty-two women and 10 men were arrested in the surprise raid at the theater and charged with presenting or participating in indecent exhibitions. All arrested were released on $125 bail. In total 70 men and 45 women were arrested in the surprise raids across the city. (Photo by Chicago Tribune Historical Photo) 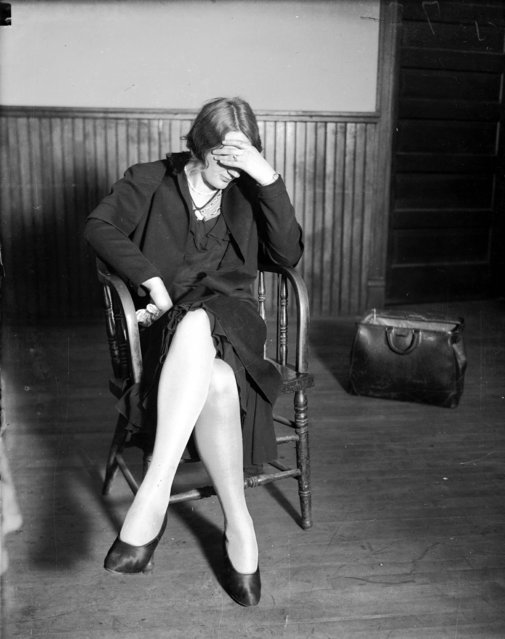 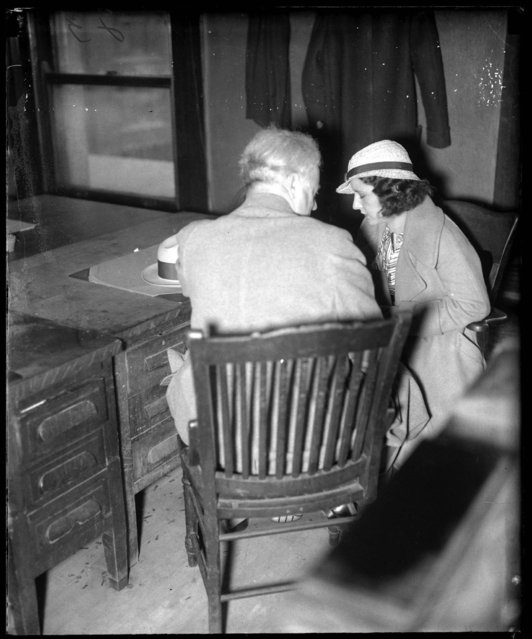 Evelyn “Billie” Frechette, 27, right, was arrested in Chicago while her boyfriend and fugitive, John Dillinger, watched helplessly on April 9, 1934. Frechette, who had met Dillinger in 1933, was charged with harboring a fugutive in her St. Paul, Minn. apartment. She spent two years in jail, getting out in 1936. Upon her release, Frechette toured in a theatrical production called “Crime Doesn't Pay” with members of Dillinger's family. (Photo by Chicago Tribune Historical Photo) 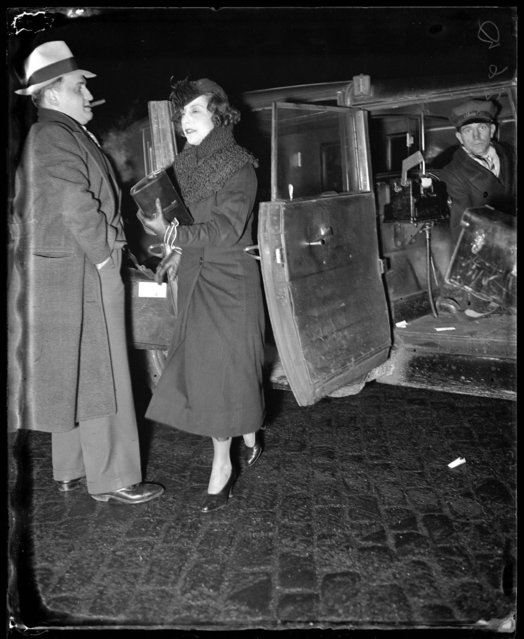 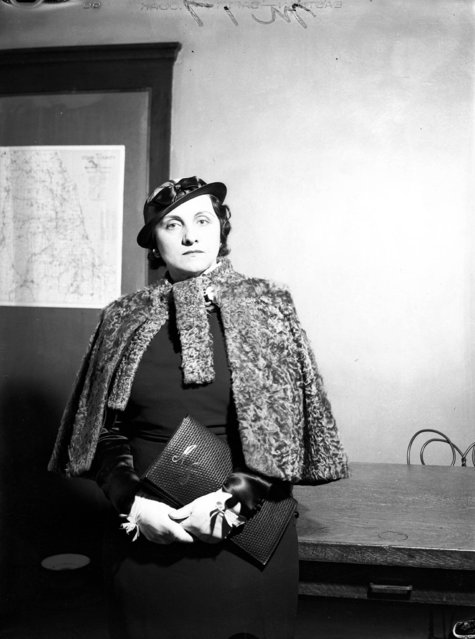 Anna Sage (nicknamed Women in Red) in October 1935. Sage, who is said to have worn red or orange as a mark for the FBI, had been with John Dillinger when he was shot and killed by police outside the Biograph Theater in Chicago on July 22, 1934. Sage said she made a deal with famous FBI agent Melvin Purvis. In exchange for information on Dillinger's whereabouts, she would not be deported to her home country of Romania for running a brothel in Chicago. Sage was still fighting deportation even after fingering Dillinger. Her lawyers were Thomas J. Johnson Sr. and Jr., with offices at 160 N. LaSalle Street. (Photo by Chicago Tribune Historical Photo) 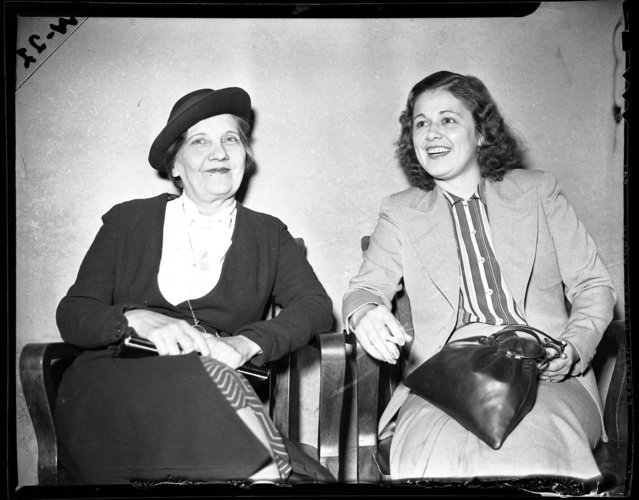 Miss Emeline Poshil, 51, left, and Miss Bernice Sheppard, 25, at the State's Atty's Office after being arrested for owning and operating a bookie for women on October 19, 1938. According to the Chicago Daily Tribune, Miss Sheppard was looking after the place, located at 5057 Lake Park Avenue, for her mother Mae, who was out watching a horse that she owned at the track. The Sheppard mother and daughter team, along with Poshil who was a clerk, had run the bookie for women for eight or ten years. “The ladies were nibbling jelly rolls and sipping soft drinks and coffee”, according to the newspaper, when State's Attorney axmen came busting into the handbook for discriminating women. Detective Daniel Moriarty and his fellow axmen were ill at ease arresting the women with Moriarty later saying “I was a little embarrassed”. The headline read “Axmen Toast Ladies With A Bang Up Party; Axmen Wreck Handbook Run By Women”. (Photo by Chicago Tribune Historical Photo) 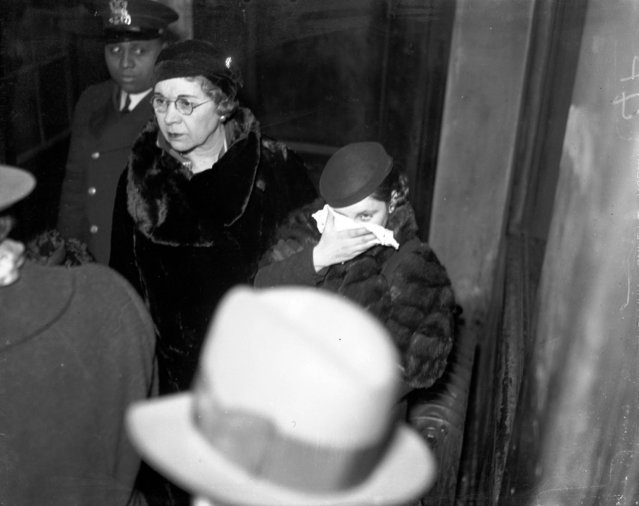 Mae Blalock, alias Mae Davis, girlfriend of Basil “The Owl” Banghart (who is an associate of gangster Roger Touhy), was arrested in Baltimore and returned to Chicago, circa February 20, 1934, for possessing some of the money Banghart stole in a mail truck robbery. According to the Chicago Tribune, Mae Davis claimed to be Banghart's wife. (Photo by Chicago Herald & Examiner Historical Photo) 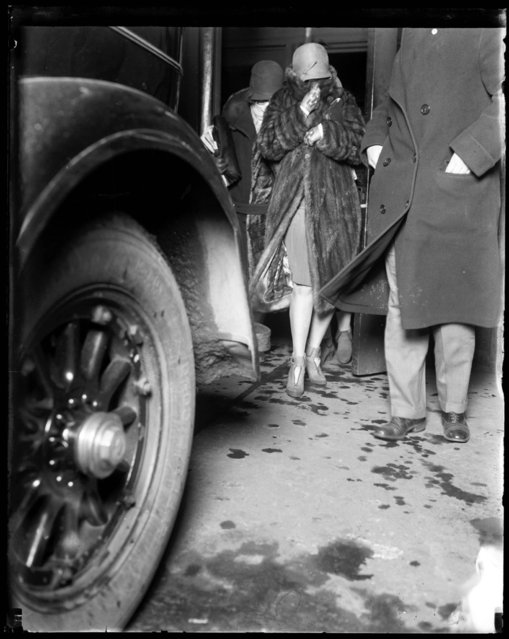 Mrs. Myrtle Gorman, center, of 434 Roscoe Street, was the wife of Peter Gusenberg, a gang leader for George “Bugs” Moran. Gusenberg, 40, was murdered when rival Capone-backed gangsters mowed him and six companions down in a North Clark Street garage on February 14, 1929. Mrs. Gorman, who denied all knowledge of her husbands activities, is leaving the Gusenberg inquest on Feb. 14, 1929. The murders became known as the St. Valentine's Day Massacre. (Photo by Chicago Herald & Examiner Historical Photo) 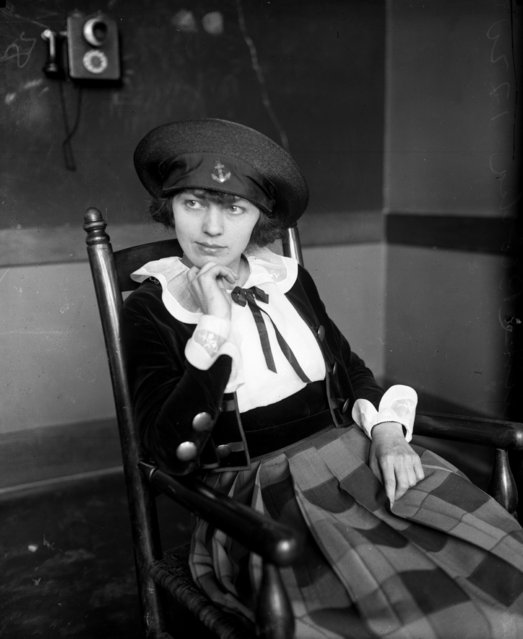 Pauline Plotka, 25, in 1918. Plotka, a dress designer, shot and killed her on-again, off-again boyfriend, Dr. Anton Jindra, in the interns quarters of Cook County Hospital on February 15, 1918. Plotka wanted Jindra to promise to marry her and when he wouldn't, she shot him with a pearl-handled revolver. He implicated her before he died at the hospital. Plotka took laudanum after shooting Jindra, a potent narcotic, that caused her to become comatose and require medical attention. Charged with the murder, Plotka continually collapsed during the trial. She was acquitted June 27, 1918. (Photo by Chicago Tribune Historical Photo)
Edit Del
29 Jul 2014 11:28:00, post received 0 comments
Publication archive:
←   →
Popular tags:
All tags
Last searches: