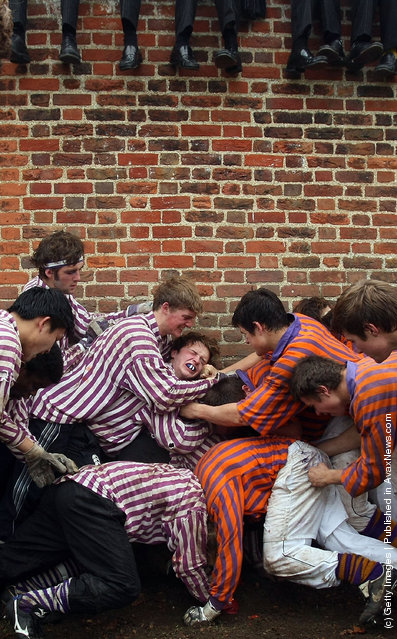 Photo: The “Collegers” and the “Oppidans” of Eton College take part in the “Wall Game” as boys in their traditional school uniform watch from on top of the wall on November 17, 2007 in Eton, near Windsor, Berkshire, England. The first recorded “Wall Game” took place in 1766 with competition between the two houses at the boarding school remaining as fierce as ever on the annual St. Andrew's day event. The object of the game is to get the ball to either end of the wall and score a goal, which has not happened since 1909. As well as scoring a goal the players can win points with a “shy”, where the ball is held against the wall and touched by the hand and awarded one point. (Photo by Christopher Furlong/Getty Images)
Details
22 Sep 2011 11:01:00,post received 0 comments
Publication archive:
←   →
Popular tags:
All tags
Last searches: