Touching China's First Spacewoman Liu Yang
China has sent its first woman into space on a mission to dock with an orbiting station, the latest step in an ambitious programme to go to the moon and on to Mars.

The Shenzhou-9 capsule lifted off smoothly at the Jiuquan launch centre, set in the arid wastes of north China's Gansu province, commanded by an air force colonel, Jing Haipeng, 46. All systems functioned normally and, just over 10 minutes later, it opened its solar panels and entered orbit.

Female astronaut Liu Yang, 33, and two male crew members – mission commander and veteran astronaut Jing Haipeng, 45, and newcomer Liu Wang, 43 – are to dock the spacecraft with a prototype space lab launched last year in a key step toward building a permanent space station. All three are experienced pilots and officers in the Chinese air force.

Two of the astronauts will live and work inside the module to test its life-support systems while the third will remain in the capsule to deal with any unexpected emergencies.

The trio are among a breed of “superbeings”, said state media, a cadre of astronauts who will one day be able to endure the 56 million km journey to Mars.

Their training was run by the military but can be pieced together from Chinese specialist magazines and army journals. Physical and psychological resilience are put to extreme test in the so-called “58 ladders” that Chinese astronauts must “climb” to qualify for national fame – and there are no concessions to women.

The astronauts are expected to reach the module, called Tiangong 1, on Monday. Now orbiting at 343 kilometers (213 miles) above Earth, the module is only a prototype, and plans call for it to be replaced by a larger permanent space station due for completion around 2020.

That station is to weigh about 60 tons, slightly smaller than NASA's Skylab of the 1970s and about one-sixth the size of the 16-nation International Space Station.

China has only limited cooperation in space with other nations and its exclusion from the ISS, largely on objections from the United States, was one of the key spurs for it to pursue an independent space program 20 years ago.

China first launched a man into space in 2003 followed by a two-man mission in 2005 and a three-man trip in 2008 that featured the country's first space walk.

In November 2011, the unmanned Shenzhou 8 successfully docked twice with Tiangong 1 by remote control.

Shenzhou 9 is to first dock with the module by remote control, then separate and dock again manually in order to fully test the reliability of the system. The astronauts are to conduct medical tests and various other experiments before returning to Earth after more than 10 days. (Photo by Ng Han Guan/China Foto Press/AP Photo) 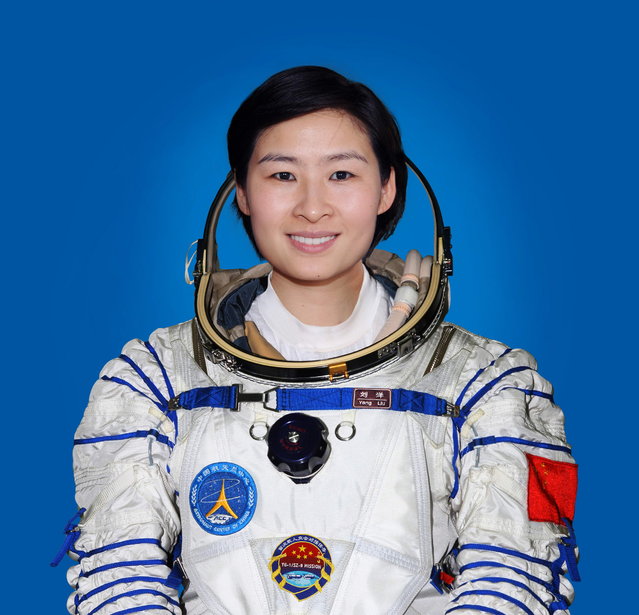 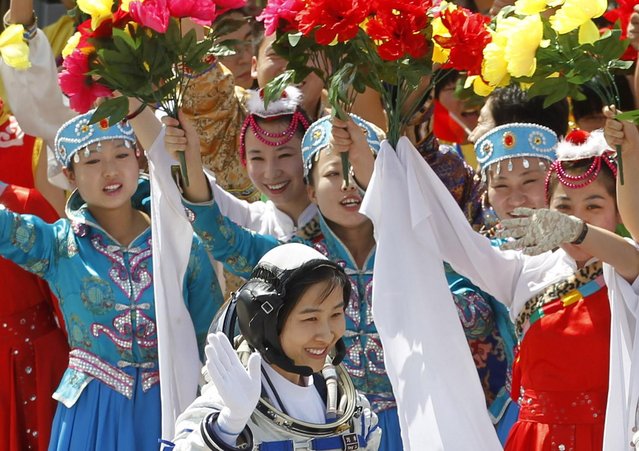 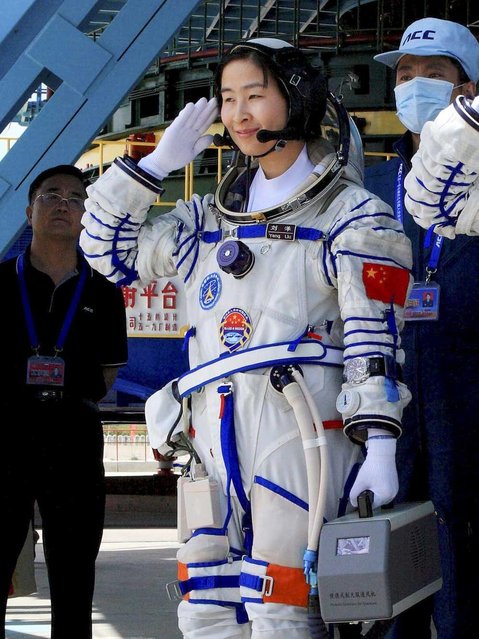 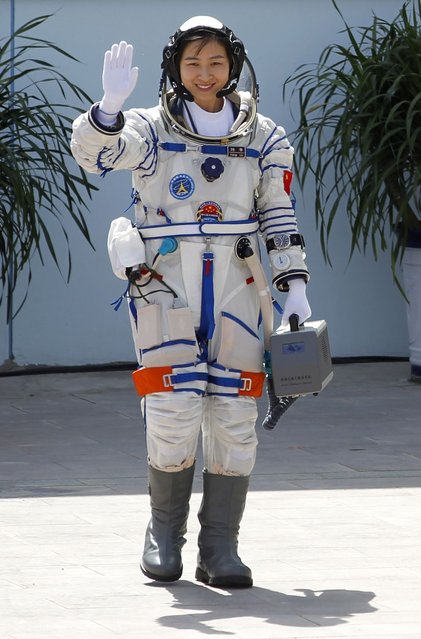 China's first female astronaut Liu Yang, waves during a sending off ceremony before she departs for the Shenzhou 9 spacecraft rocket launch pad at the Jiuquan Satellite Launch Center in Jiuquan, China, Saturday, June 16, 2012. China will send its first woman and two other astronauts into space Saturday to work on a temporary space station for about a week, in a key step toward becoming only the third nation to set up a permanent base in orbit. (Photo by Ng Han Guan/AP Photo) 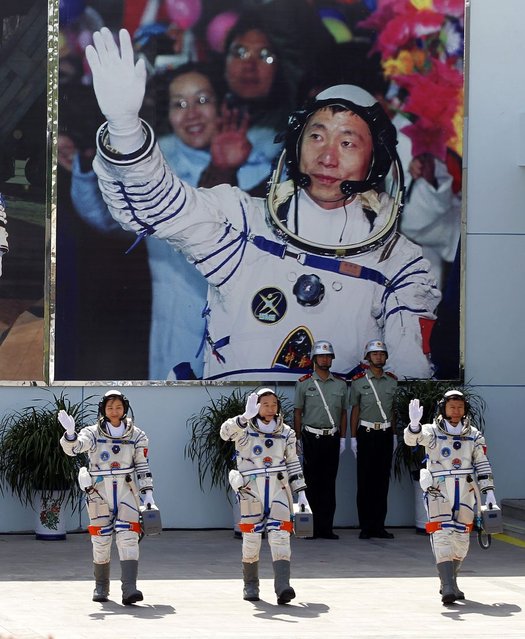 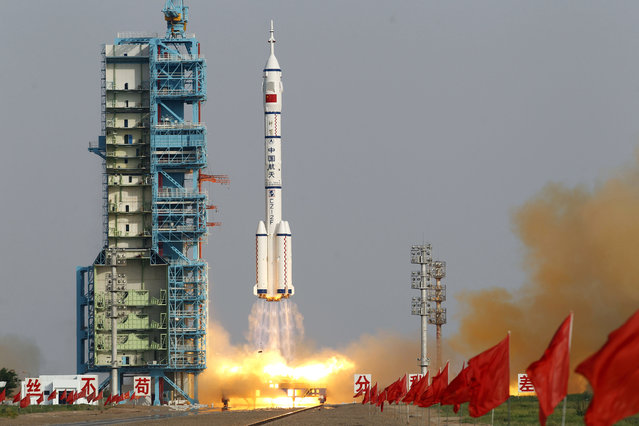 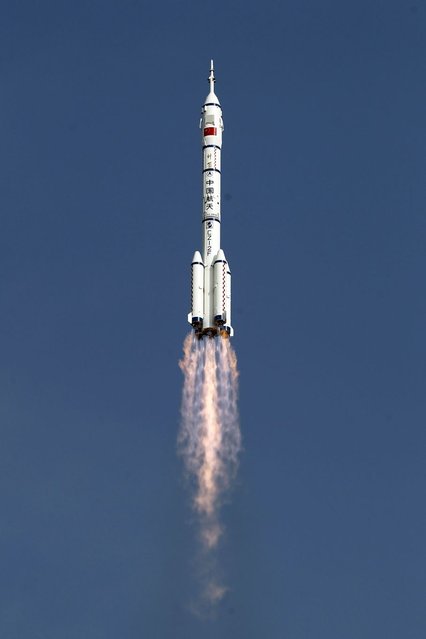 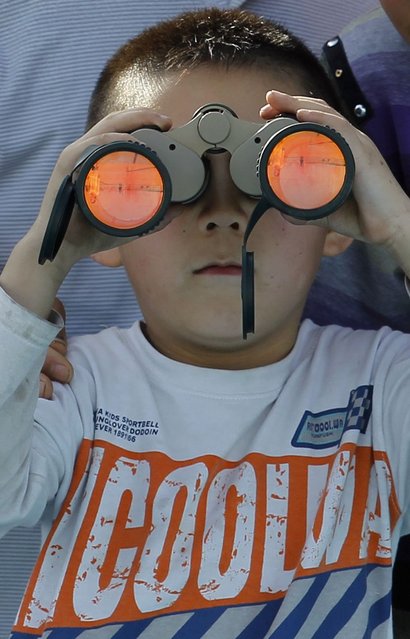 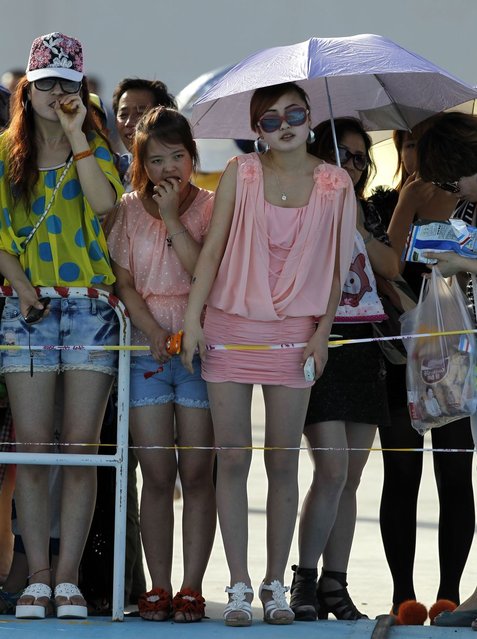