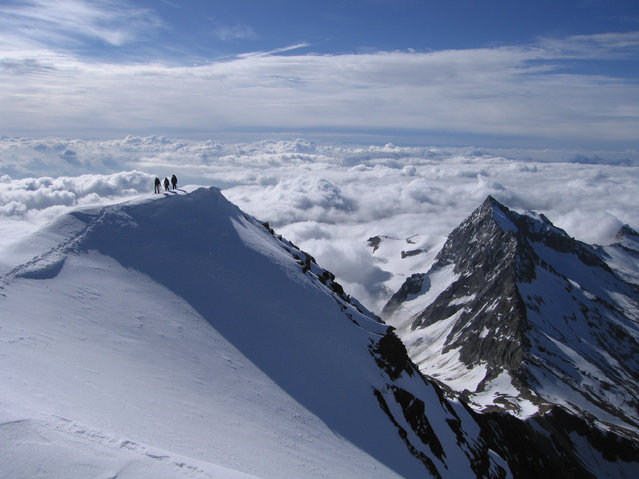 Jim Metcalf, January winner. “The summit of the Weismiess, a mountain above Saas Fee, on the border of Switzerland and Italy. I was fortunate to be, with my son, the first to summit on the day. We saw another party following our footsteps along the summit ridge”. MICK RYAN, JUDGE: With a sense of scale added by the three figures, this above-the-clouds mountain scene has a strong narrative from foreground to background. When trekking or climbing in the mountains it is often useful to look out for people to include in your composition rather than pure landscape compositions. (Photo by Jim Metcalf/The Guardian) 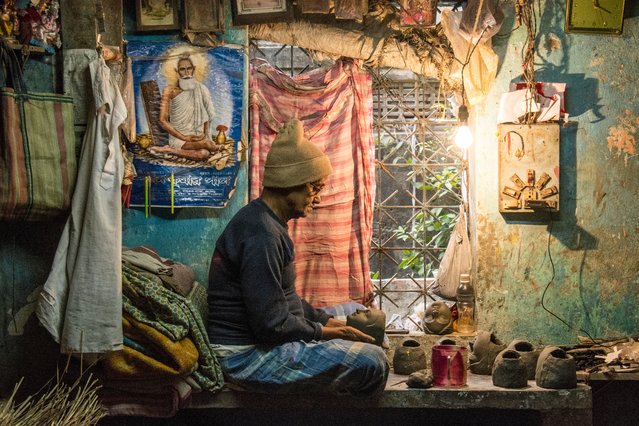 Jason Pemberton, February winner. “A sculptor in one of Kolkata’s many idol-making workshops inspects his work while adding the finishing touches. A multitude of clay deities are made for immersion in the Hooghly river at religious festivals”. MICK RYAN, JUDGE: A wonderful, atmospheric glimpse of a man making clay heads. Although his surroundings are busy with decorations and tools, the pastel colour palette and subtle lighting evoke feelings of calm and mystery. (Photo by Jason Pemberton/The Guardian) 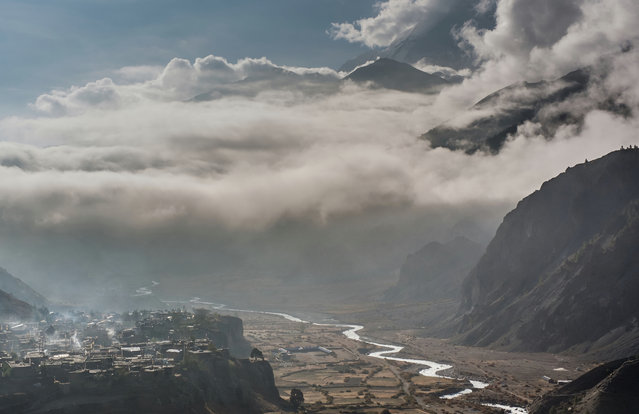 Keith Urry, March winner. “As we were leaving the Manang valley, Nepal, early in the morning I looked back to see this gorgeous light over the valley and got this shot before the scene changed”. MICK RYAN, JUDGE: Zoom lenses should be used more often for landscape photography, rather than just the usual wide-angle lenses. In this stunning photograph the scene is compressed with a zoom lens bringing the distant mountains nearer to add great contrast of scale to the village on the rocky mesa. Add a serpentine river, low clouds and you have a powerful winning photograph. (Photo by Keith Urry/The Guardian) 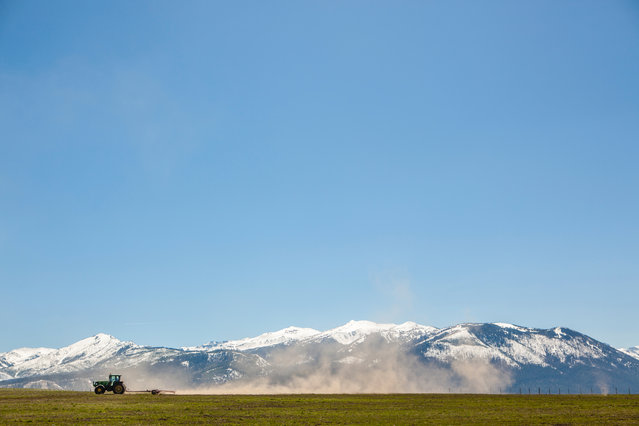 Tim Daw, May winner. “The snowpack in Oregon may be good this year, but it will take several years to emerge from drought in the western US. Here a tractor is harrowing rather than ploughing, to prevent the soil surface from drying out too much”. MICK RYAN, JUDGE: Often photographers are advised to fill the frame, but sometimes it is best to give the subject space and let it do the talking. Everything’s happening in the lower fifth of the frame here: a tractor, its dust trail, fence line and grassland, all against snowy mountains, and above lovely emptiness giving those subjects emphasis. (Photo by Tim Daw/The Guardian) 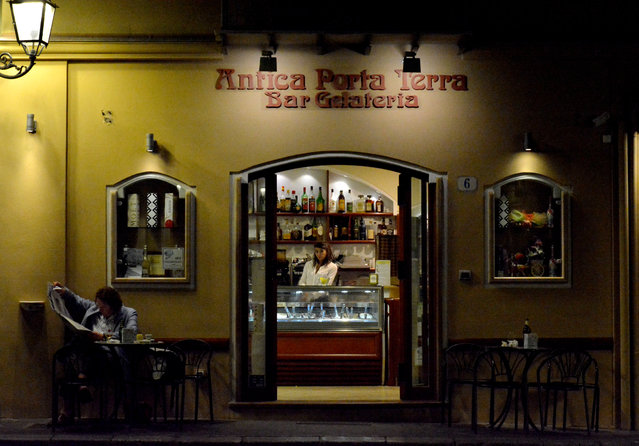 Jill Sett, July winner. “Piazza Garibaldi, Cefalu, Sicily. My favourite bar with Marcella the waitress staring off into space”. MICK RYAN, JUDGE:Wandering around when travelling, especially off the beaten track, is a way to get a real feel for a place. Take a camera and you observe and enjoy more. Good street photography is hard, especially in daylight. When the sun sets and the lights are turned down you are hidden and less self-conscious. Use a high ISO and hand hold, and you may get something like this moment, where there is mystery and tension. (Photo by Jill Sett/The Guardian) 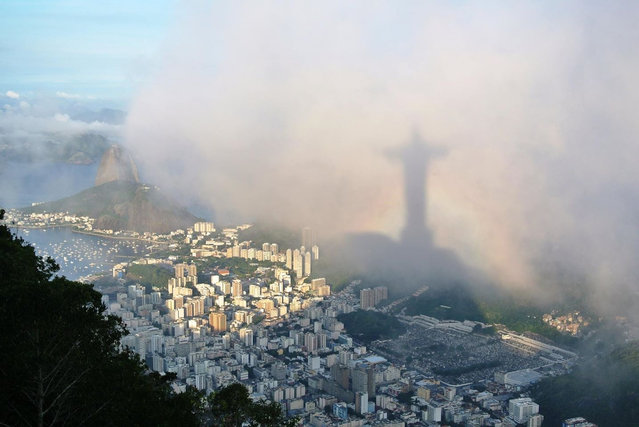 Ben Goodwin, August winner. “Rio de Janeiro as seen from Corcovado, with the shadow of Christ the Redeemer projected onto the clouds and framed by a rainbow”. MICK RYAN, JUDGE: What perfect timing, and not just because of the Olympics. Landscape photography is often dependent on light and weather for that wow factor, and being in the right place at the right time. This dramatic image, taken early morning with the light shining through the mist, produces a broken spectre – a rainbow shadow – of the statue. It must have taken some planning and effort to get such a wonderful photograph. (Photo by Ben Goodwin/The Guardian) 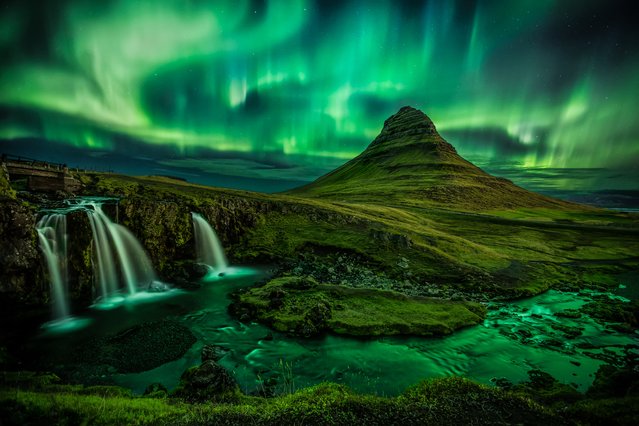 October winner. “A burst of the aurora borealis over Kirkjufell, taken in September 2016. This shot has been a holy grail for me and was finally captured after many trips”. MICK RYAN, JUDGE: Iceland is a hotspot for aurora photography and this composition of the symmetric, free-standing Kirkjufell and the trident waterfall is much-sought after. If you can time your visit when the aurora “kp” index is high and know the settings for nighttime aurora images, you may end up with a beautiful photograph like this. (Photo by DB/The Guardian) 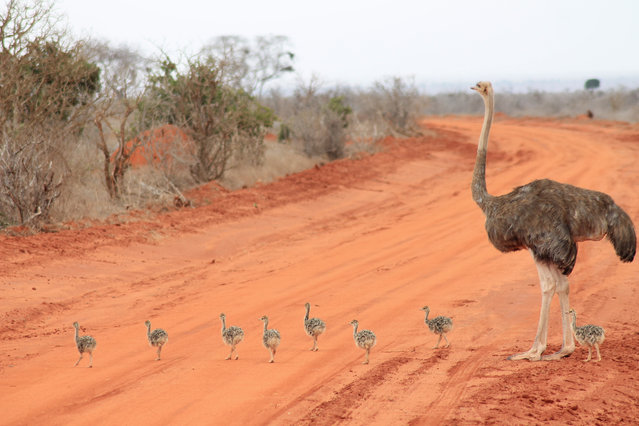 Kevin Pogorzelski, November winner. “On safari in Kenya, we were forced to stop our jeep for this family of ostriches to cross the dirt track. What made it so engaging was the mother attentively waiting for the chicks to cross while, out of shot, the father was leading the way”. MICK RYAN, JUDGE: Funny-looking flightless birds and their offspring give us comedy and cuteness – and an immediate emotional response. A clear monthly winner by anyone’s standards – and what lovely colour. (Photo by Kevin Pogorzelski/The Guardian) Ben Moore, December winner. “The gorgeous little children of the Hamar tribe in southern Ethiopia were only too happy to make this circle of feet for me. They laughed their heads off the whole time”. MICK RYAN, JUDGE: Maybe a set-up shot, but many are. The most poignant memories of a trip often aren’t the grand vistas or the glorious sunrises and sunsets, but the smallest details. These children sitting in a circle and this lovely composition of just their toes, feet and legs, says so much. You decide what. (Photo by Ben Moore/The Guardian) 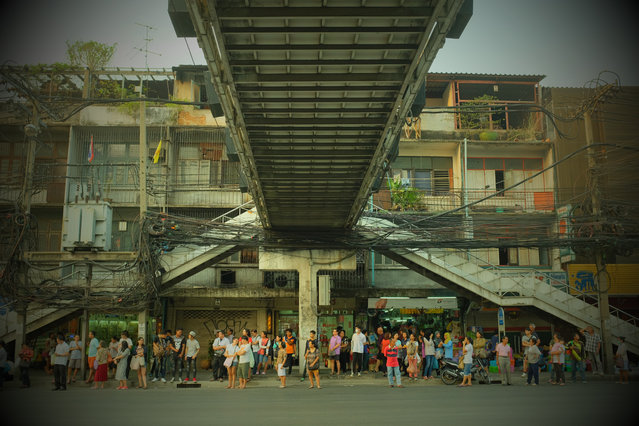 Simon Cove, April winner and 2016 runner-up. “Bus stop, rush hour, Bangkok. I was attracted by the symmetry of this Bangkok footbridge. The waiting people enhance the composition and show something of city life”. MICK RYAN, JUDGE: Sometimes it is not the popular landmarks that grab our attention and it is good to explore the less obvious. I find this photograph mesmerising. A beautifully composed study yet with so many subject points – apartments, plants, aerials, wires – framed by the bridge and steps and people. The processing of the colour in retro-film tones adds calm to this chaotic scene. (Photo by Simon Cove/The Guardian) 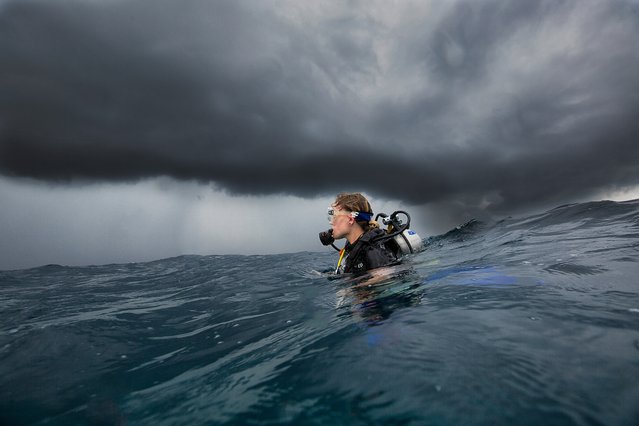 Simon Dunn, runner-up, September winner. “South Ari Atolls, Maldives. The photo shows my partner and dive buddy, Emma, surfacing after the last dive of the day to 1.5 metre swells and dark monsoon clouds. The image shows just how unforgiving the sea and weather changes can be in the Indian Ocean”. MICK RYAN, JUDGE: This is active travel photography, with the photographer and subject in the thick of it. This beautiful portrait of a diver below a menacing sky stands out for its emotional and elemental beauty. It is a reminder that while we may play among nature, we are always dwarfed by its power. (Photo by Simon Dunn/The Guardian) 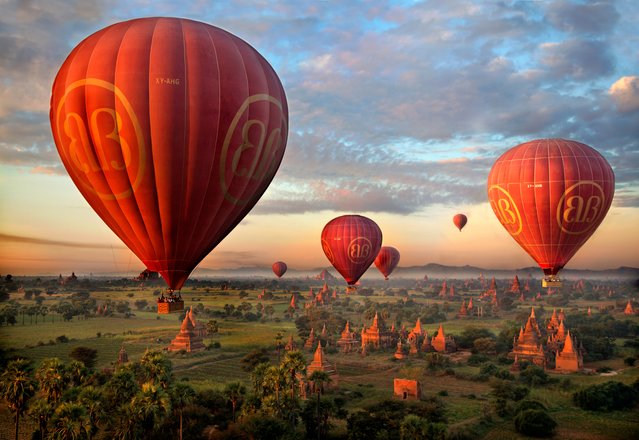 Alastair Swan, overall winner, June winner. “Balloon flight over Old Bagan, Myanmar. Bagan has temples and pagodas as far as the eye can see. Experiencing this sight at dawn from a hot-air balloon will remain engraved in my memory for ever”. MICK RYAN, JUDGE: This photograph makes me want to be there. Alastair has got the composition, depth of field, exposure, colour and subjects all perfect. It is the early morning light on the pagodas that makes it for me, the golden hour providing beautiful illumination of the retrogression of the temples and balloons toward a misty. (Photo by Alastair Swan/The Guardian)
Edit Del
26 Dec 2016 07:33:00, post received 0 comments
Publication archive:
←   →
Popular tags:
All tags
Last searches: