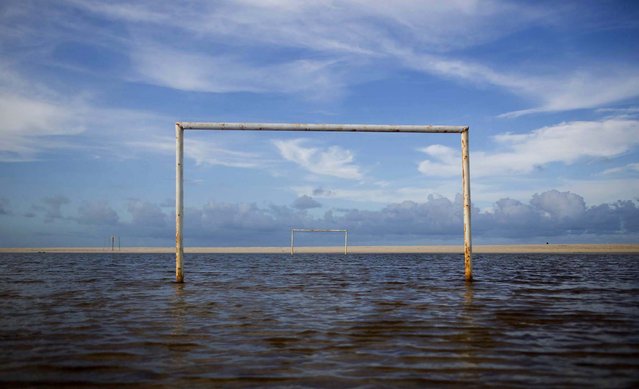 A soccer field is seen under water during a high tide in Beberibe, near Fortaleza, Brazil, on March 27, 2014. Beberibe is one of the coast cities located south-east of Fortaleza with many magnificent beaches popular with tourists. Fortaleza is one of the host cities of the 2014 soccer World Cup. (Photo by Felipe Dana/Associated Press) 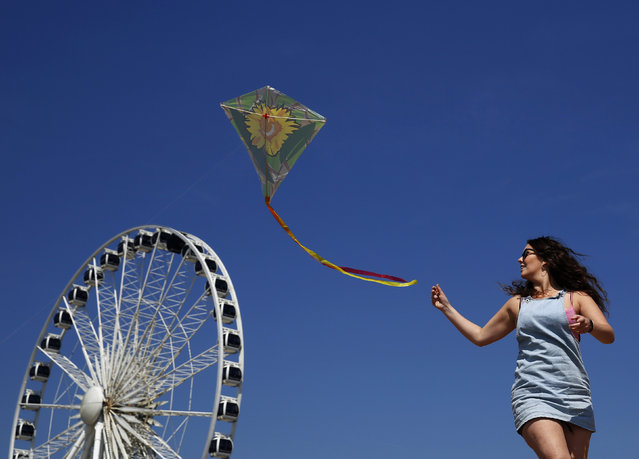 Outreach worker, Kathryn Owen plays with a kite in the sunny weather on Brighton beach in southern England May 16, 2014. (Photo by Luke MacGregor/Reuters) 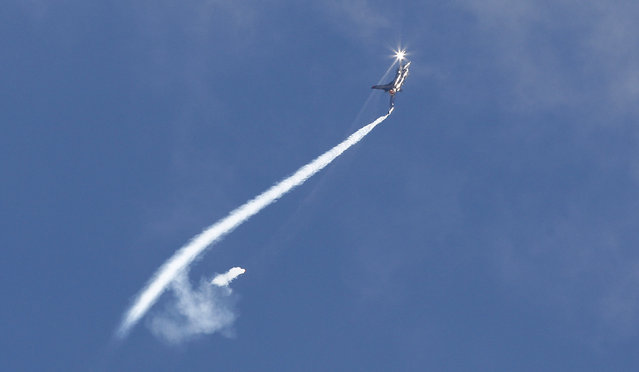 A Lockheed Martin F-16 of the Turkish Air Force performs during an acceptance flight at the upcoming ILA Berlin Air Show in Selchow near Schoenefeld south of Berlin May 19, 2014. (Photo by Tobias Schwarz/Reuters) 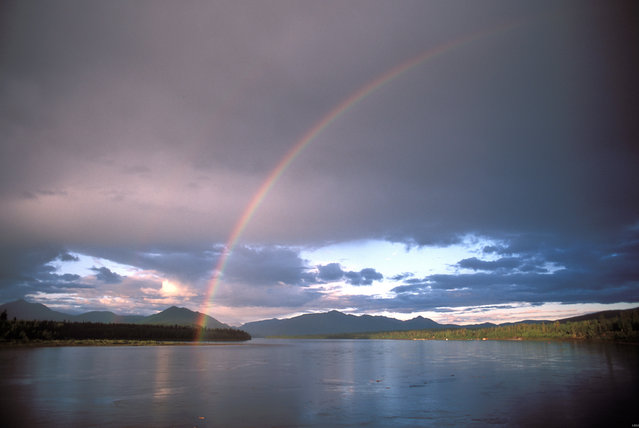 A rainbow is seen over the Yukon River in Eagle, Alaska in this undated handout photo courtesy of the U.S. Geological Society. Alaska has banned fishing for king salmon in the Yukon River in the summer of 2014, saying that runs could come in even lower than 2013's historically low numbers amid a 10-year decline. (Photo by Reuters/U.S. Geological Society) 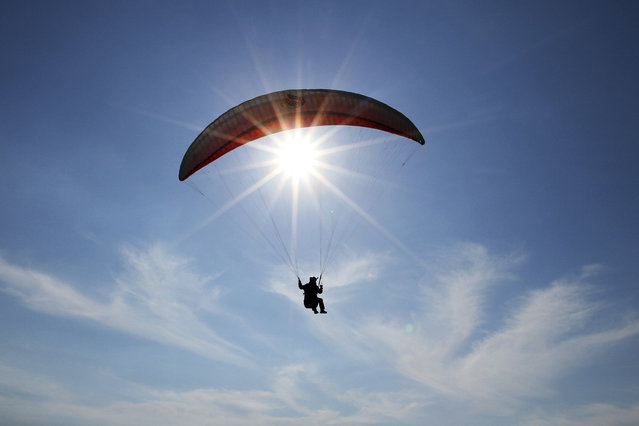 A paraglider flies during the annual Balkan paragliding competition over the city of Vlore, some 150 km (94 miles) from Tirana, May 7, 2014. (Photo by Arben Celi/Reuters) 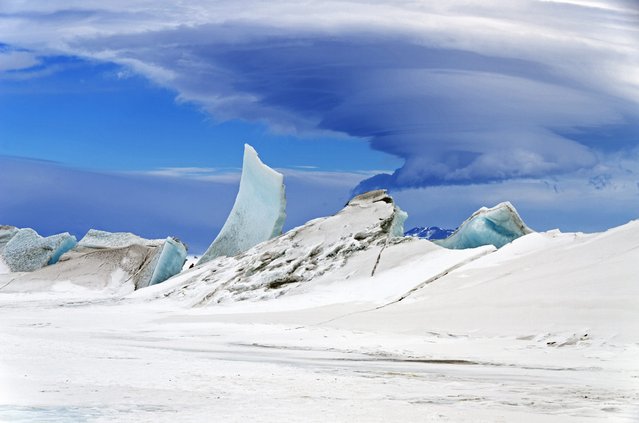 A handout picture made available by NASA on 13 May 2014 shows a multi-layered lenticular cloud hovering near Mount Discovery, a volcano about 70 km southwest of McMurdo Station on Ross Island, Antarctica, 24 November 2013. In 43 hours across five science flights in late November 2013, NASA's P-3 research aircraft collected more than 20,000 km worth of science data. Instruments gathered information about the thickness of the ice over sub glacial lakes, mountains, coasts, and frozen seas. The flights over Antarctica were part of Operation IceBridge, a multi-year mission to monitor conditions in Antarctica and the Arctic until a new ice-monitoring satellite, ICESat-2, launches in 2016. Lenticular clouds are a type of wave cloud. They usually form when a layer of air near the surface encounters a topographic barrier, gets pushed upward, and flows over it as a series of atmospheric gravity waves. Lenticular clouds form at the crest of the waves, where the air is coolest and water vapor is most likely to condense into cloud droplets. The bulging sea ice in the foreground is a pressure ridge, which formed when separate ice floes collided and piled up on each other. (Photo by Michael Studinger/EPA) 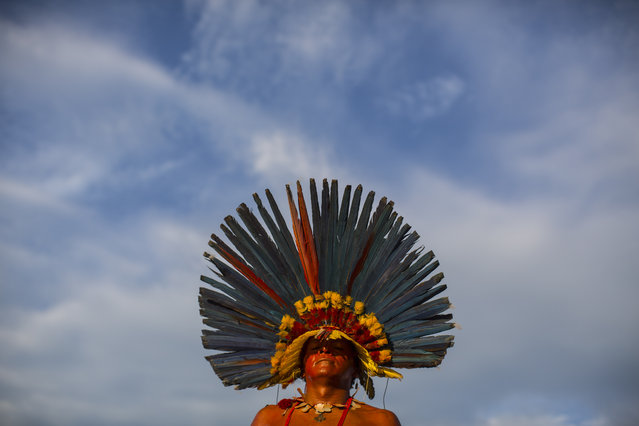 A Bororo Indian poses for a photo during the Indigenous Games in Cuiaba, Brazil, Friday, November 15, 2013. (Photo by Felipe Dana/AP Photo) 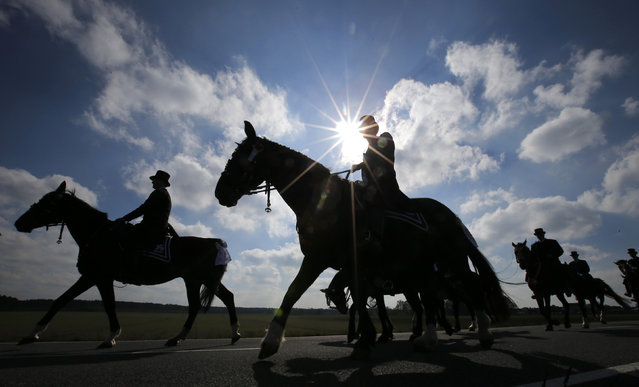 Men of the German Slavic minority Sorbs, dressed in traditional clothes, ride horses during a ceremonial parade near the village of Ralbitz, northeast of Dresden, April 20, 2014. More than 1,000 horse riders took part in several parades to mark the resurrection of Jesus Christ on Easter Sunday. (Photo by Fabrizio Bensch/Reuters) 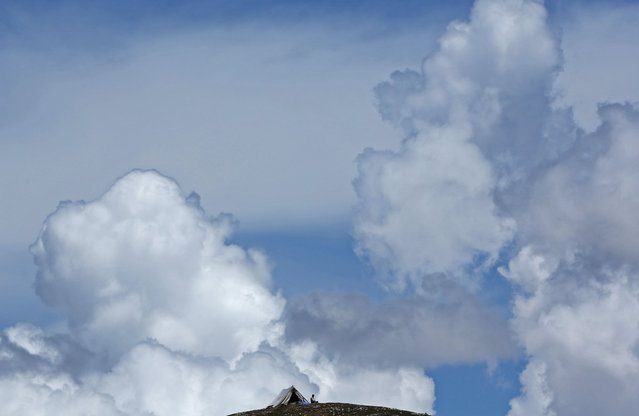 An Afghan survivor sits in front of his tent near the site of Friday's landslide that buried Abi-Barik village in Badakhshan province, northeastern Afghanistan, Tuesday, May 6, 2014. Hundreds of people were killed in the landslide and authorities tried to help families displaced by the torrent of mud that swept through their village. (Photo by Massoud Hossaini/AP Photo) 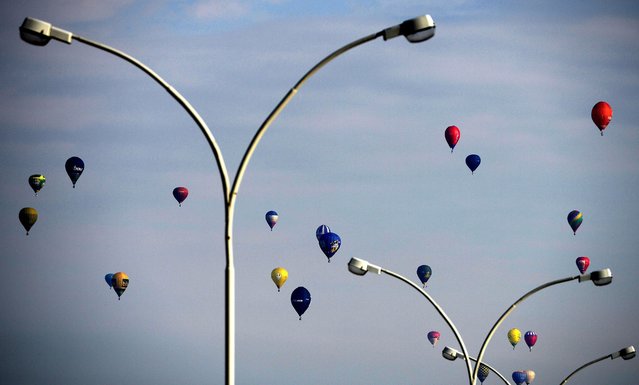 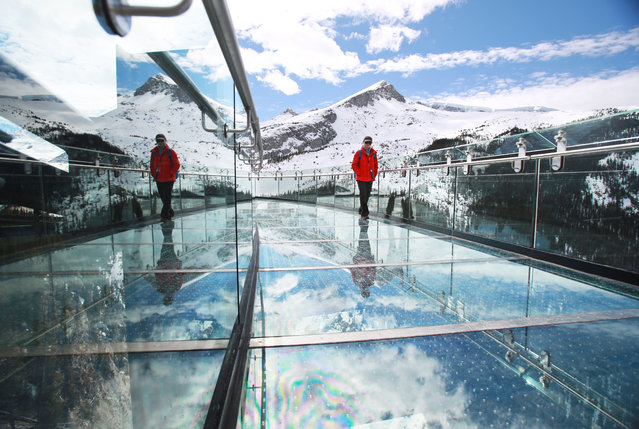 Visitors take in the opening day of the Glacier Skywalk near Alerta's Columbia Icefields in Jasper National Park Thursday May 1, 2014. (Photo by Gavin Young/Calgary Herald) 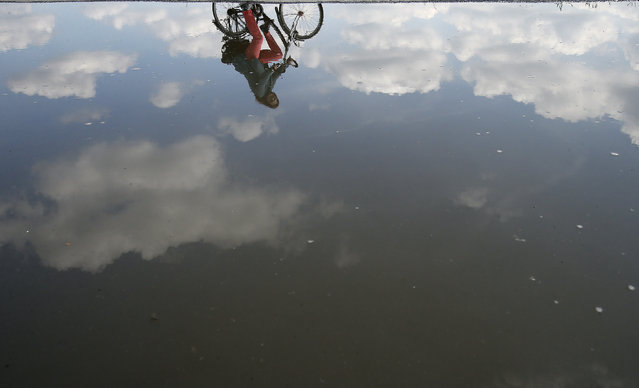 A cyclist is reflected in a puddle caused by a rainy period in Duisburg, Germany, Friday, May 16, 2014. Germany's weather forecast predicts the end of rain and warm and sunny weather for the upcoming week. (Photo by Frank Augstein/AP Photo) 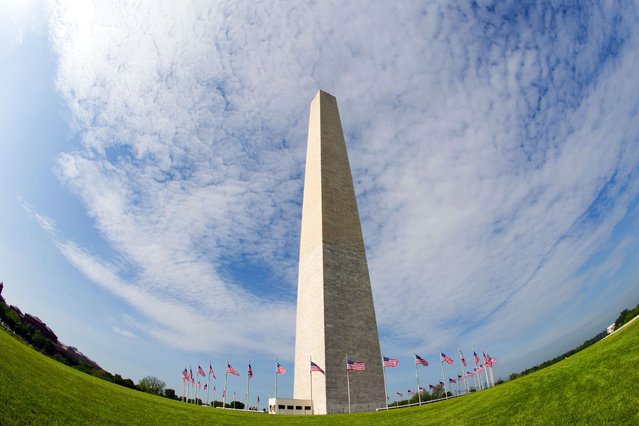 The Washington Monument is seen through a wide angle lens May 12, 2014 in Washington, DC. The Washington Monument, one of the US capital's most recognizable sights, is set to re-open Monday, three years after sustaining damage from a rare earthquake.The popular tourist attraction is the US capital city's tallest building at 555 feet (170-meters). The obelisk, built in honor of the first US president, George Washington, was closed after engineers found 150 cracks in the structure following a 5.8-magnitude earthquake in the neighboring state of Virginia in August 2011. (Photo by Karen Bleier/AFP Photo) 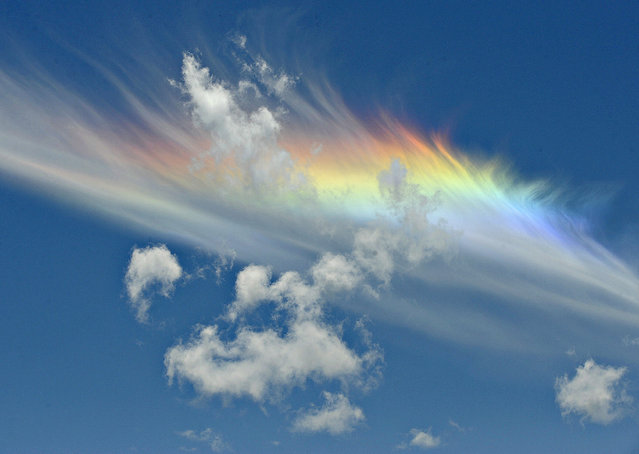 A rainbow is seen near a cloud south of Corvallis, Ore., Monday, May 19, 2014. (Photo by Andy Cripe/AP Photo/The Corvallis Gazette-Times) 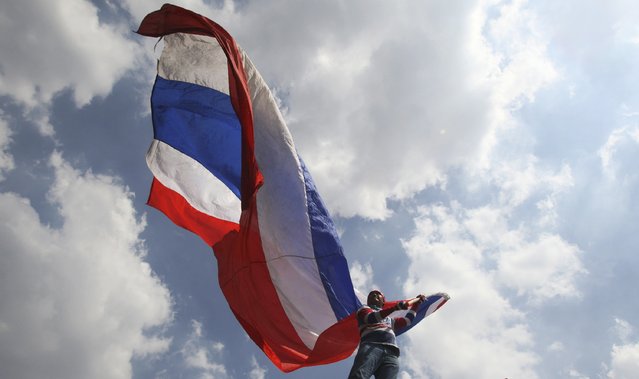 An anti-government protester waves a Thai national flag during a rally Saturday, May 10, 2014, in Bangkok, Thailand. The protesters achieved a partial victory on Wednesday when the Constitutional Court ousted Prime Minister Yingluck Shinawatra, saying she had violated the constitution by transferring a senior civil servant to benefit her politically powerful family. Nine other Cabinet members were also forced from their posts. (Photo by Sakchai Lalit/AP Photo)
Edit Del
22 May 2014 10:00:00, post received 0 comments
Publication archive:
←   →
Popular tags:
All tags
Last searches: