Touching Wellcome Image Awards 2014 Shortlist: Life in Extreme Close-up
Beautiful, strange and occasionally alarming pictures from the shortlist for this year’s Wellcome image awards – which celebrate the very best in science photography and imaging – from an x-ray of a bat to a micrograph of a kidney stone. The exhibition opens on 12 March at three science centres and the Museum of Science and Industry in Manchester. 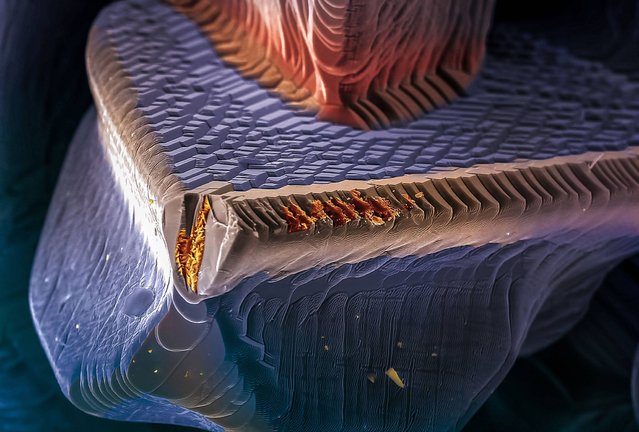 SEM false-coloured to resemble the bow of a ship submerged in the sea, shows the morphology of a crystal of the polycrystalline compound called copper indium gallium diselenide or Cu(In,Ga)Se2 (commonly abbreviated to CIGSe or CIGS). Due to its valuable photovoltaic properties, such as high optical absorption, this semiconductor has been successfully used to make thin film solar cells and modules. The use of this type of material allows for more efficient use of solar energy, and thin film modules based on CIGS have shown excellent long term outdoor stability. Solar energy can be exploited by using solar cells to directly convert sun light into electricity. It is one of the most abundant and cleanest renewable energy sources currently available. Using renewable energy sources reduces dependence on fossil fuels and helps to protect the environment. Horizontal image width is 320 micrometres. (Photo by Eberhardt Josué Friedrich Kernahan and Enrique Rodríguez Cañas/Wellcome Images) 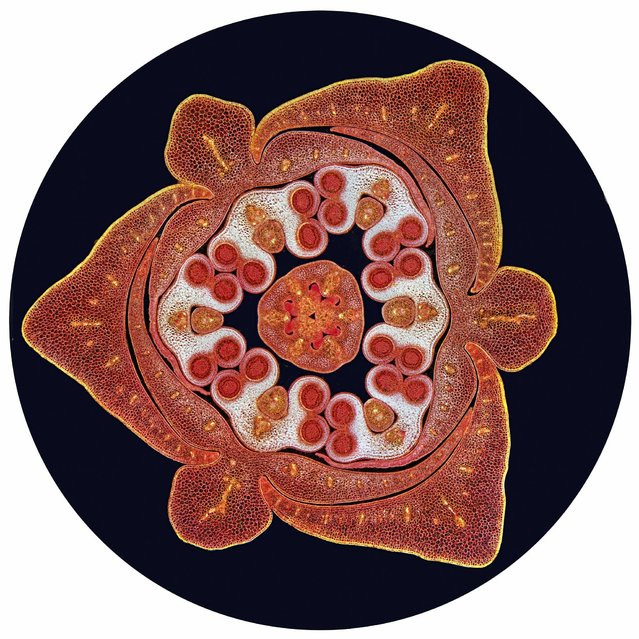 Transverse section through a stained lilium bud (Liliaceae) showing the male and female reproductive organs. At the centre of the image is the pistil, the female part of the flower which contains ovules housed in an ovary. This is surrounded by 6 male anthers (white) each containing 4 pollen sacs (red circles) which will be filled with pollen grains. Around the outside of these are 3 petals and 3 sepals. Viewed with a light microscope using dark ground illumination. Horizontal field width is 10 mm. (Photo by Spike Walker/Wellcome Images) 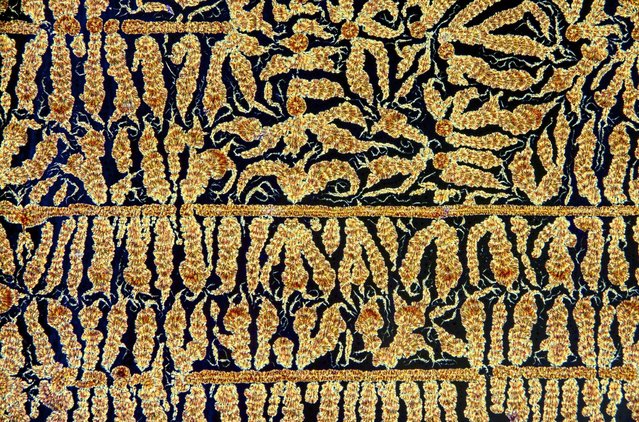 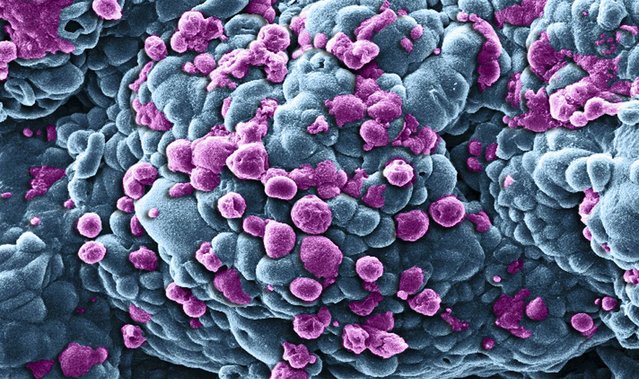 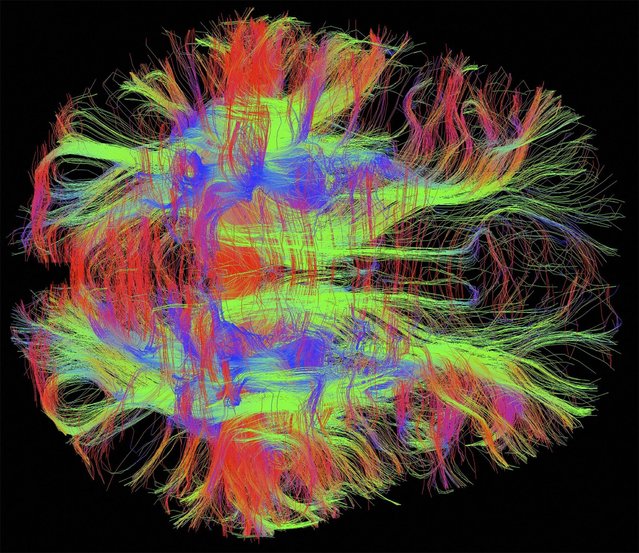 Bird's eye (axial) view of nerve fibres in a normal, healthy adult human brain. Brain cells communicate with each other through these nerve fibres, which have been visualised using diffusion weighted magnetic resonance imaging (DWI MRI). Diffusion weighted imaging is a specialised type of MRI scan which measures water diffusion in many directions in order to reconstruct the orientation of the nerve fibres. Since these images are in 3D, colours have been used to represent the direction of the fibres: blue is for fibres travelling up/down, green for front/back, and red for left/right. These patterns of connectivity in the brain are being used to study brain development and developmental disorders such as dyslexia. (Photo by Zeynep M. Saygin/McGovern Institute/MIT/Wellcome Images) 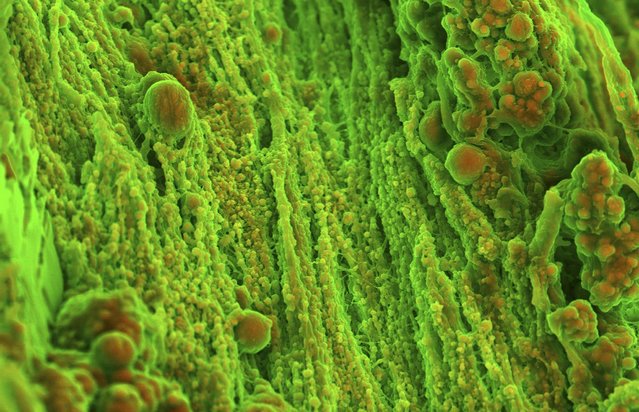 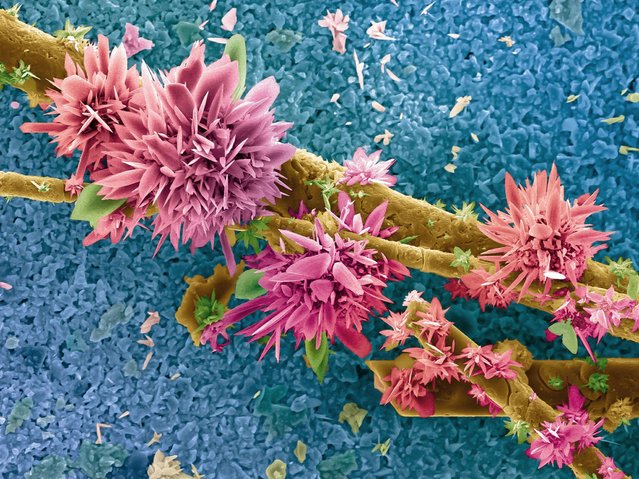 False-coloured SEM of an agricultural sludge sample after burning in an oxygen atmosphere. Silver oxide structures and structures rich in calcium carbonate (calcareous) can be seen. The background (blue) corresponds to the surface of a zirconia crucible (container that can withstand very high temperatures) which is used to burn the sample in. Burning the sample in the presence of oxygen allows total carbon (C), hydrogen (H), nitrogen (N) and sulfur (S) content to be measured (elemental analysis). A wide range of organic and inorganic samples can be analysed in this way including soils, sludge, water, fuels, polymers, cosmetics and pharmaceuticals. This technique can also be used in environmental studies to verify the quality or contamination of fuels and soils. Horizontal image width is 155 micrometres. (Photo by Eberhardt Josué Friedrich Kernahan and Enrique Rodríguez Cañas/Wellcome Images) 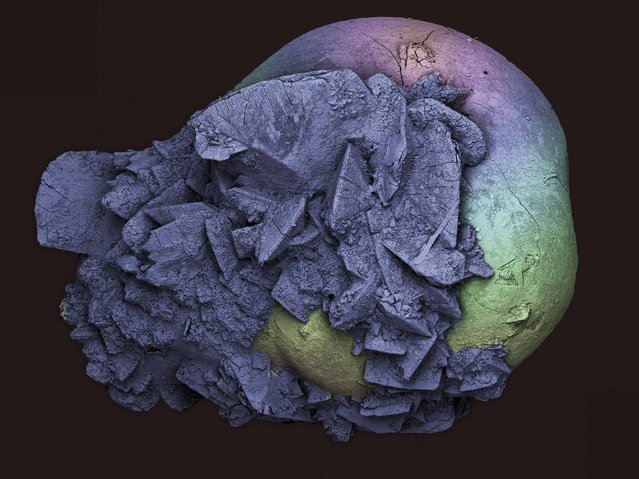 Scanning electron micrograph of a kidney stone (nephrolithiasis). Kidney stones form when salts, minerals and chemicals in the urine (for example calcium, oxalate and uric acid) crystallise and solidify. Small kidney stones are often passed naturally but larger stones can sometimes get lodged in the kidney or other parts of the urinary tract. Size of stone is 2 mm. (Photo by Kevin Mackenzie, University of Aberdeen/Wellcome Images) 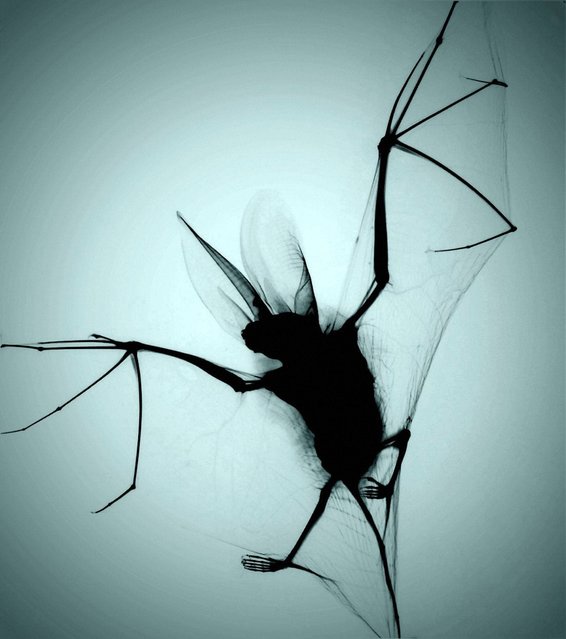 X-ray projection of a brown long-eared bat (Plecotus auritus), captured and killed by a cat. The brown long-eared bat is a medium sized bat with ears almost as long as its body. It is commonly found in the UK and across Europe, and all species are protected by law in the UK. The rabies virus (Rhabdoviridae family, Lyssavirus genus) can be passed to humans if saliva from an infected animal (e.g. dog, bat) enters the body for example through a bite. The virus travels up the nerves and infects the brain and central nervous system. This is almost always fatal unless treated very early on. Actual size of the bat is approximately 5 cm high. (Photo by Chris Thorn xrayartdesign.co.uk/Wellcome Images) 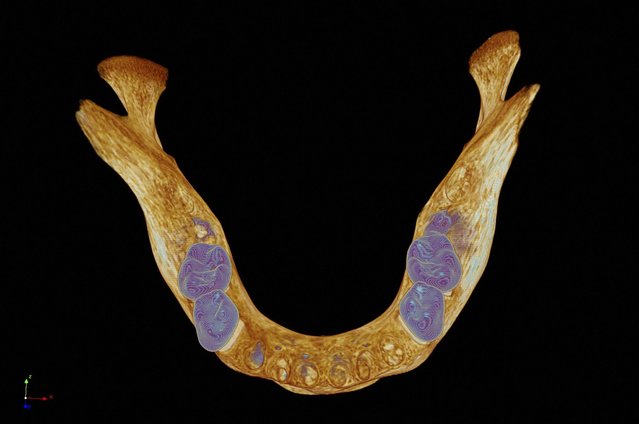 Bird's eye view of a model of a medieval human mandible (lower jawbone). To image the specimen, 4800 virtual x-ray slices were captured using a micro CT scanner. These were then used to create a digital model and colour textures were applied to highlight the teeth (blue) and bone (brown). (Photo by Kevin Mackenzie/University of Aberdeen/Wellcome Images) 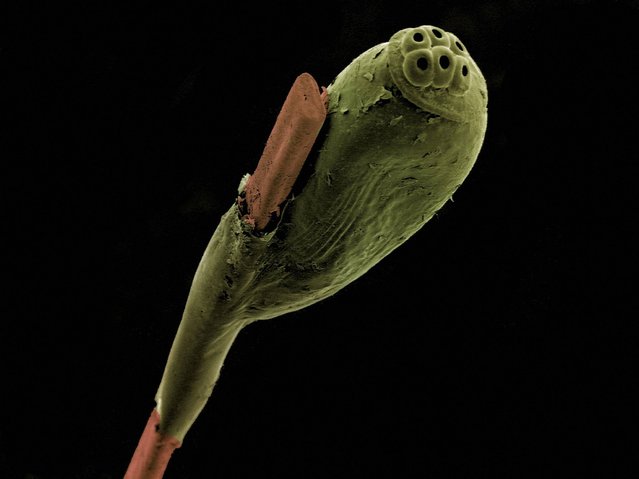 False-coloured scanning electron micrograph of a head louse egg (green) attached to a strand of human hair (brown). Head lice (Pediculus) feed on human blood and live in close proximity to the scalp. They lay eggs (nits) in sacs which firmly attach to individual strands of hair near the base of the shaft. Horizontal image width is 1.5 mm. (Photo by Kevin Mackenzie/University of Aberdeen/Wellcome Images) 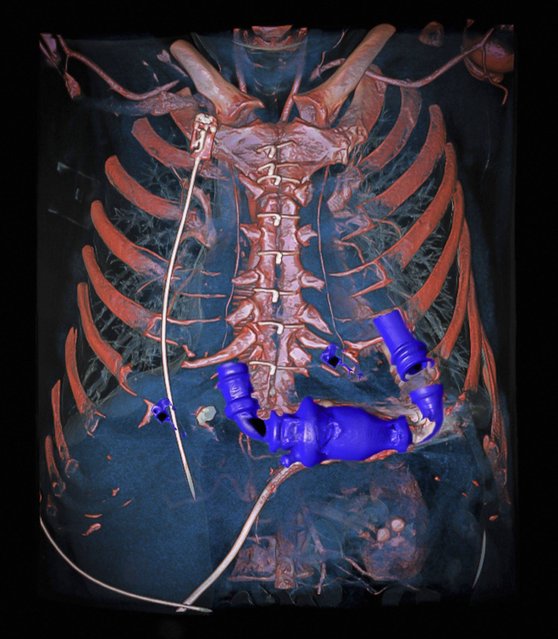 Dual energy computed tomography angiography (DECT) of a human chest. The scan was performed with an extremely low radiation dose on a patient who had received a mechanical heart pump while waiting for a heart transplant. The image was rendered with a 3D volume rendering technique to check the wiring of the pump to the left side of the diseased heart and to the aorta (major artery supplying oxygenated blood from the heart to the rest of the body). The pump connection to the heart was faultless. DECT has two sources of x-rays (dual source CT) at different energies, which are used simultaneously to scan the patient. The patient is scanned in a series of virtual x-ray “slices” which are then digitally reconstructed to produce a 3D image. Colours and degree of transparency can then be applied to the various tissues. DECT provides higher quality images than conventional CT without the need for exposure to additional radiation. (Photo by Anders Persson/Wellcome Images) 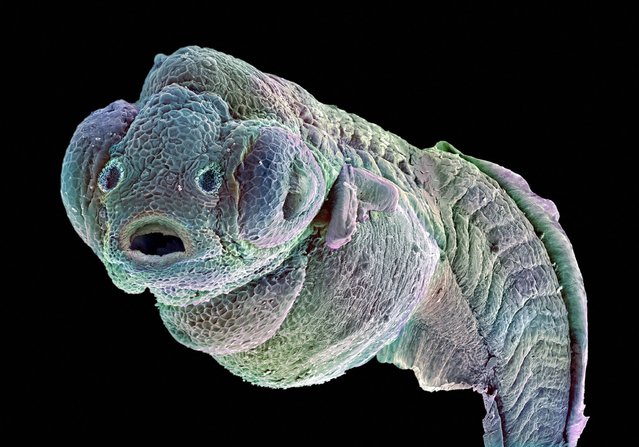 False-coloured scanning electron micrograph of a zebrafish embryo. The zebrafish, Danio rerio, is a tropical freshwater fish originating from eastern Asia and is a member of the minnow family. The zebrafish embryo has gained ground as a disease model, an assay system for drug screening and is used in cancer research. Zebrafish have many characterisics which make them suitable for biomedical rersearch. The embryos develop quickly, from a single cell in a fertilized egg to something that resembles a tiny fish in 24 hours. Zebrafish are vertebrates, meaning they are more closely related to humans than commonly used invertebrate models such as insects and worms. In addition, the embryos can be genetically manipulated and are inexpensive compared to other vertebrate models. (Photo by Annie Cavanagh/Wellcome Images) 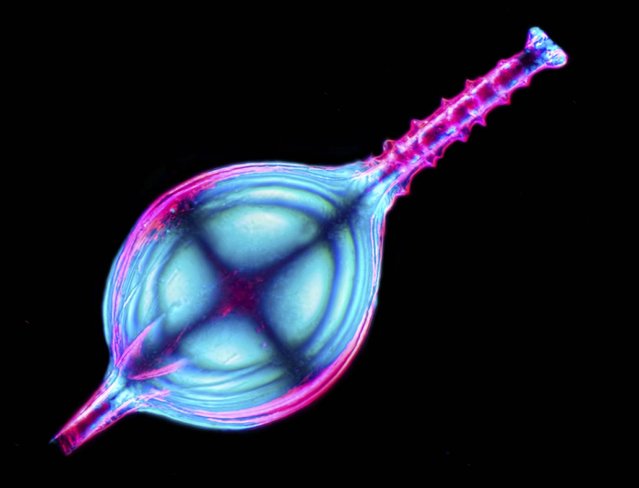 Foraminifera are marine, bottom-living predators which secrete a calcium carbonate test (external shell or case). This specimen came from the South China Sea and has a narrow neck with an external corkscrew-like thread. Imaged with crossed polarising filters. Stack of 54 images. Horizontal Field Width is 1.4 mm. (Photo by Spike Walker/Wellcome Images) 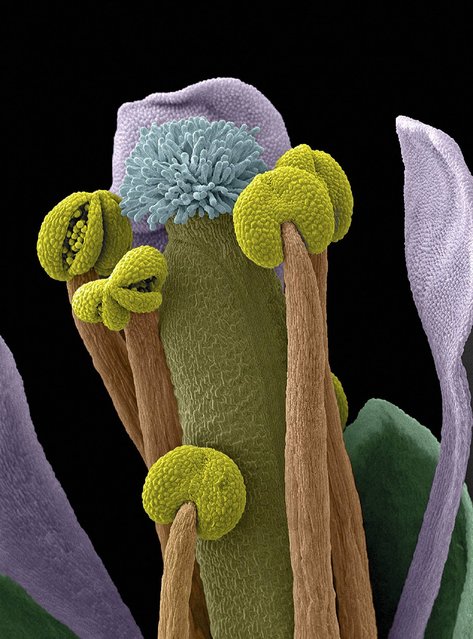