Touching Wildlife Photographer of the Year 2019 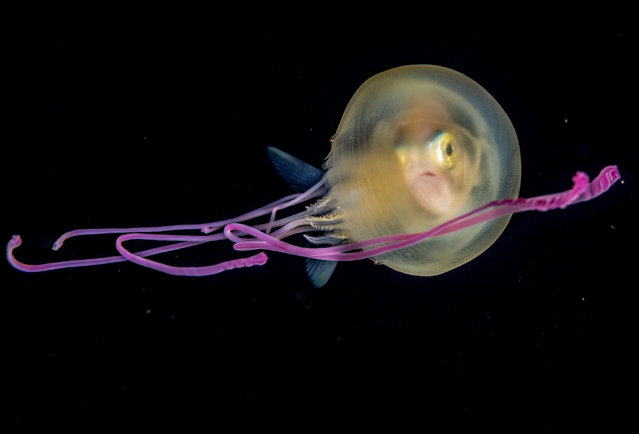 A juvenile jackfish peers out from inside a small jellyfish, which it has adopted as an overnight travelling shelter, off Tahiti in French Polynesia. (Under Water category). (Photo by Fabien Michenet) 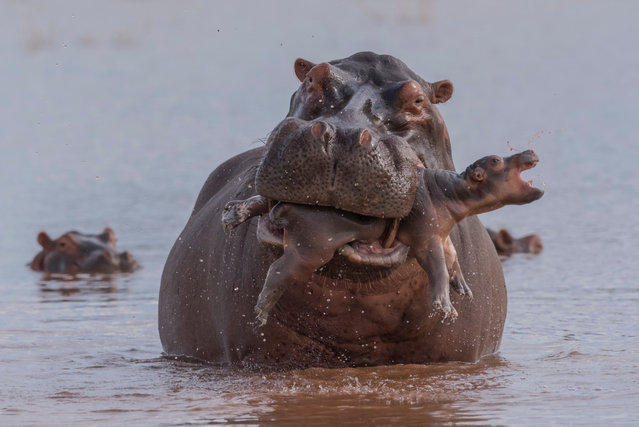 A newborn hippo was keeping close to its mother in the shallows of Lake Kariba, Zimbabwe, when a large bull made a beeline for them. He chased the mother, then seized the calf in his huge gape, clearly intent on killing it. All the while, the distraught mother looked on. Infanticide among hippos is rare but may result from the stress caused through overcrowding when their day-resting pools dry out. (Behaviour: Mammals category). (Photo by Adrian Hirschi) 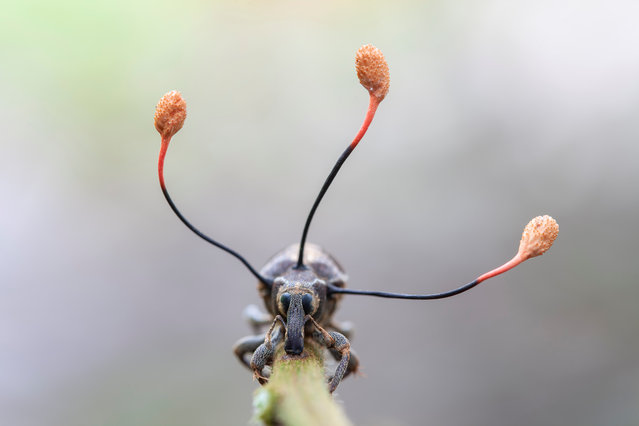 This bizarre-looking weevil is dead and the three antennae-like projections growing out of its thorax are the ripe fruiting bodies of a ‘zombie fungus’. Spreading inside the weevil while it was alive, the parasitic fungus had taken control of its muscles and compelled it to climb. When it was at a suitable height – for the fungus – the weevil held fast to the stem. By the next day, the spores had been released and the fungus had withered, its mission accomplished. (Plants and fungi category). (Photo by Frank Deschandol) 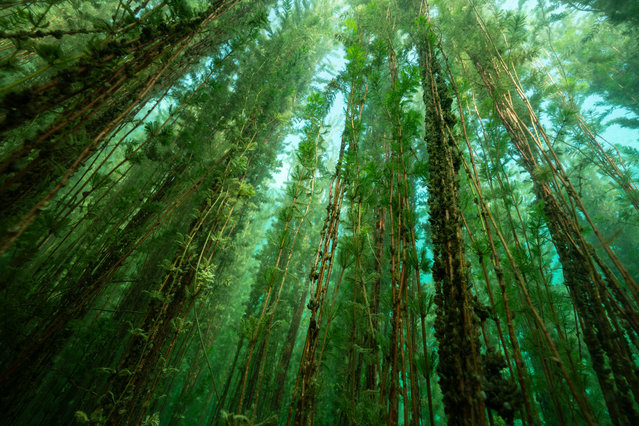 Slender stems of Eurasian watermilfoil, bearing whorls of soft, feathery leaves, reach for the sky from the bed of Lake Neuchâtel, Switzerland. (Plants and fungi category). (Photo by Michel Roggo) 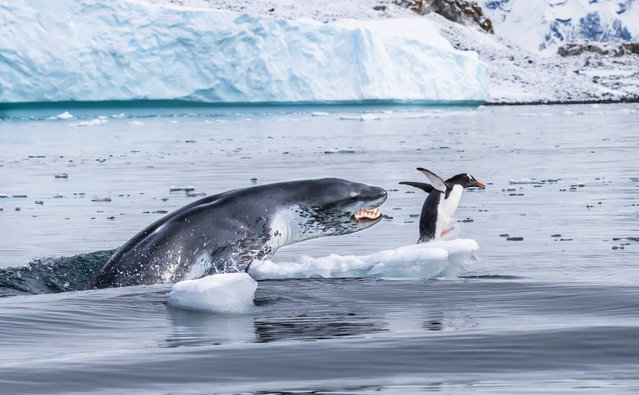 A gentoo penguin – the fastest underwater swimmer of all penguins – flees for its life as a leopard seal bursts out of the water. Leopard seals are formidable predators. Females can be 3.5 metres long and weigh more than 500 kilograms, males slightly less. Their slender bodies are built for speed, with wide jaws bearing long canines and sharply pointed molars. (Behaviour: mammals category). (Photo by Eduardo Del Álamo) 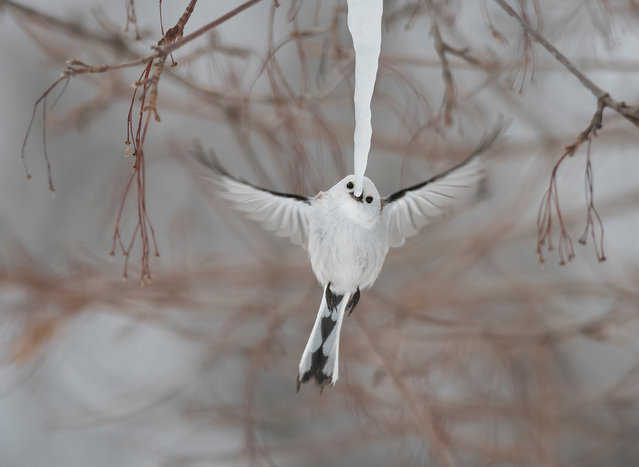 On a bitterly cold morning on the Japanese island of Hokkaido, a flock of long-tailed tits and marsh tits were gathered around a long icicle hanging from a branch, taking turns to nibble the tip. Here, a Hokkaido long-tailed tit hovers for a split second to take its turn to nip off a beakful. (Behaviour: birds category). (Photo by Diana Rebman) 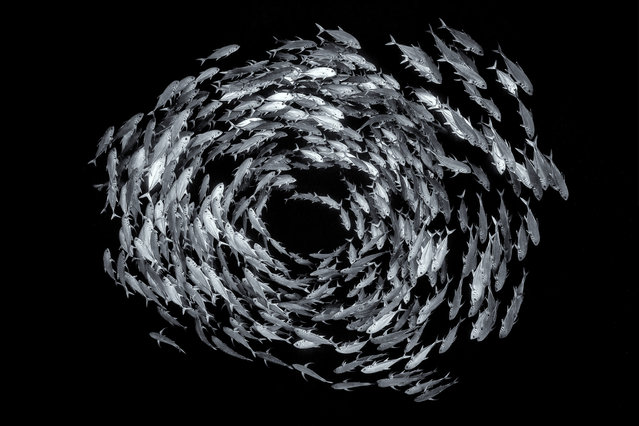 In the clear water of the Red Sea at the tip of Egypt’s Sinai Peninsula, a shoal of bigeye trevally circle 25 metres down at the edge of the reef. The fishes’ circling behaviour is a dating exercise that precedes pairing up and also deters predators. (Black and white category). (Photo by Alexander Mustard) 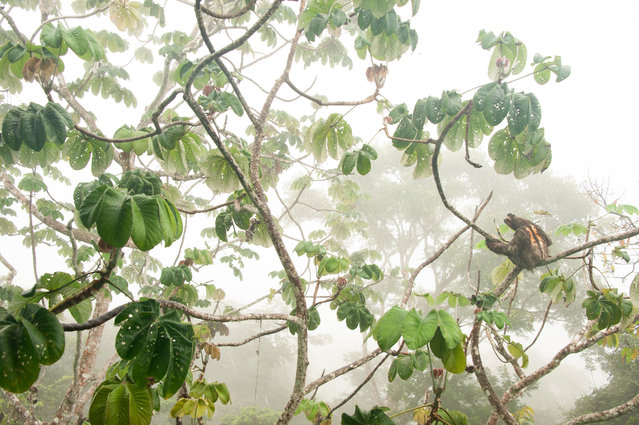 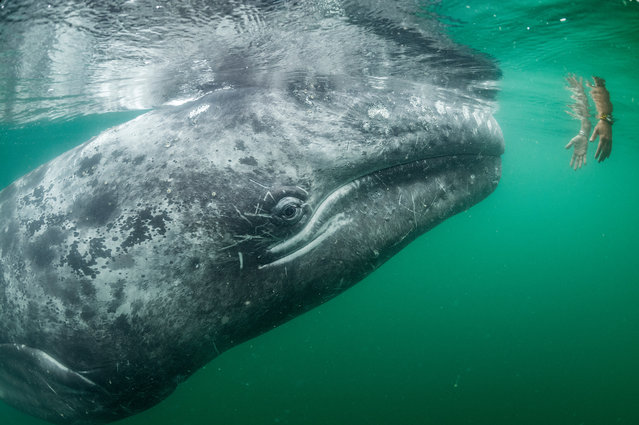 A curious young grey whale approaches a pair of hands reaching down from a tourist boat in San Ignacio Lagoon on the coast of Mexico’s Baja California. Baby grey whales and their mothers actively seek contact with people for a head scratch or back rub. (Wildlife photojournalism category). (Photo by Thomas Peschak) 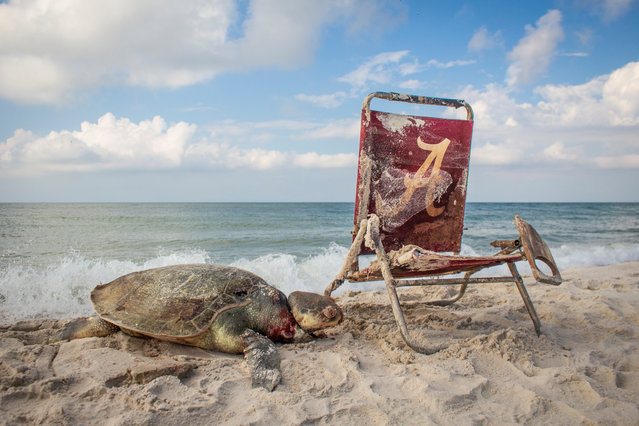 A turtle died after becoming attached to a washed-up beach chair in Alabama’s Bon Secour National Wildlife Refuge by a length of rope. The Kemp’s Ridley is not only one of the smallest sea turtles at just 65cm long it is also the most endangered. Despite protection of its limited nesting sites along the western coast of the Gulf of Mexico and a requirement for trawlers to use turtle-excluders, it is still under threat. (Wildlife Photojournalism category). (Photo by Matthew Ware) 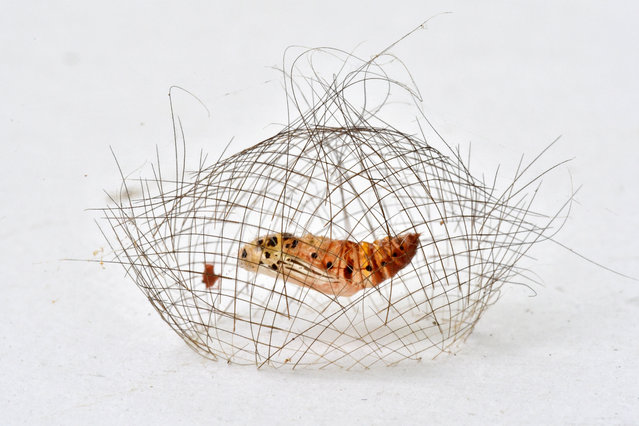 The cocoon of a Cynamoth pupa against a wall in Xishuangbanna, Yunnan, southwest China. The pupa wove a delicate 4cm-long cocoon cage with its hair-like setae. The cage provides protection against predators and once inside, the caterpillar spits out silk, spinning fine threads to suspend itself, head first from the cage while it becomes a pupa. The cage has an aperture at either end, out of which the caterpillar expels its outer layer after its final moult. Once it has reorganised its body, it emerges from the top as a white moth, decorated in red and black. (Behaviour: invertebrates category). (Photo by Minghui Yuan) 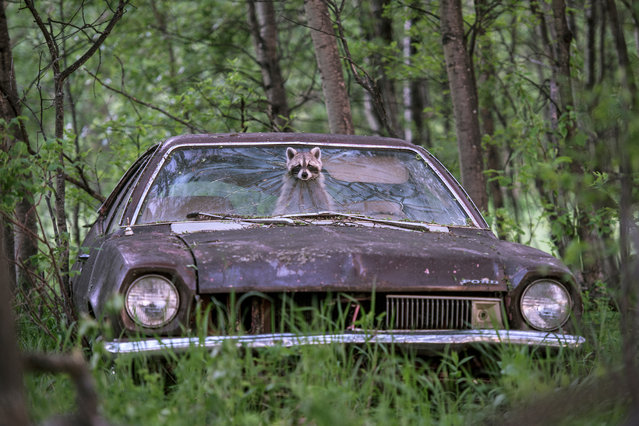 An ever-adaptable raccoon pokes her bandit-masked face out of a 1970s Ford Pinto on a deserted farm in Saskatchewan, Canada. In the back seat, her five playful kits trill with excitement. On this evening, she paused at the exit to check the surroundings before squeezing out to spend the night looking for food. (Urban wildlife category). (Photo by Jason Bantle) 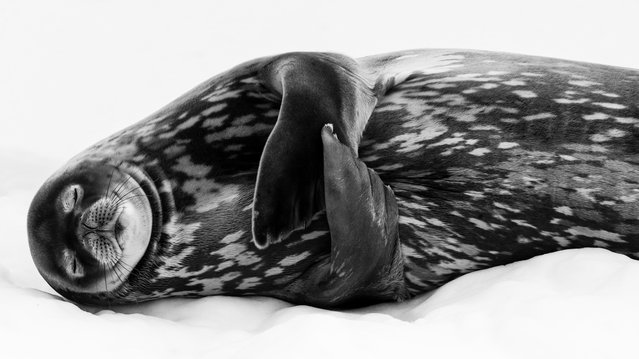 A Weddell seal appears to be in a deep sleep. Lying on fast ice (ice attached to land) off Larsen Harbour, South Georgia, it was relatively safe from its predators – killer whales and leopard seals – and so could relax and digest. Weddell seals reach lengths of up to 3.5 metres–with the females larger than the males , their bodies are covered in a layer of blubber to keep them warm above and below the icy waters of the Southern Ocean. (Black and white category). (Photo by Ralf Schneider) 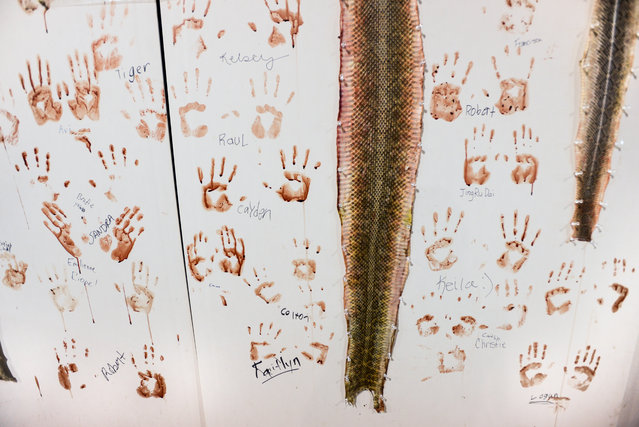 Pinned to a wall are rattlesnakes’ skins. Surrounding them are bloody handprints – marks of those who have skinned snakes at the annual rattlesnake round-up in Sweetwater, Texas. Each year tens of thousands of rattlesnakes are caught for this four‑day festival. Wranglers use gasoline to flush the snakes out of their winter dens. They are brought to the festival and decapitated as entertainment for festival-goers, who pay to skin them. What Jo-Anne McArthur, who shot this, found most unsettling was ‘that so many of the bloodied handprints belonged to children’. (Photojournalism category). (Photo by Jo-AnneMcArthur) 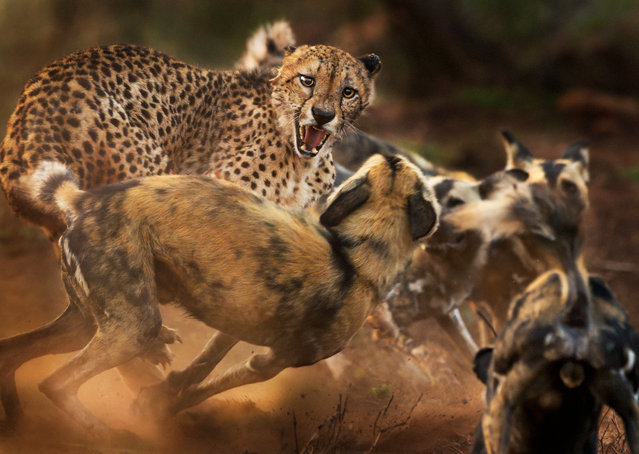 A lone male cheetah is set upon by a pack of African wild dogs. Peter Haygarth had been following the dogs as they hunted in Zimanga Private Game Reserve in KwaZulu-Natal, South Africa. On first encountering the cheetah, the dogs were wary, but as the rest of the pack arrived, their confidence grew and they began to encircle the cat. Peter kept his focus on the cat’s face. In a few minutes the spat was over as the cheetah fled. (Behaviour: mammals category). (Photo by Peter Haygarth)
Edit Del
10 Sep 2019 00:03:00, post received 0 comments
Publication archive:
←   →
Popular tags:
All tags
Last searches: