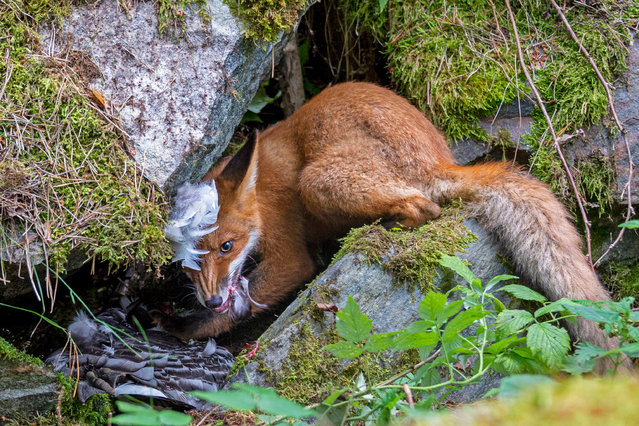 Winner – 15 to 17 years old, and Young Grand Title winner: The fox that got the goose by Liina Heikkinen, Finland. It was on a summer holiday in Helsinki that Liina, then aged 13, heard about a large fox family living in the city suburbs on the island of Lehtisaari. The island has both wooded areas and fox-friendly citizens, and the foxes are relatively unafraid of humans. So Liina spent one long July day, without a hide, watching the two adults and their six large cubs. (Photo by Liina Heikkinen/Wildlife Photographer of the Year 2020) 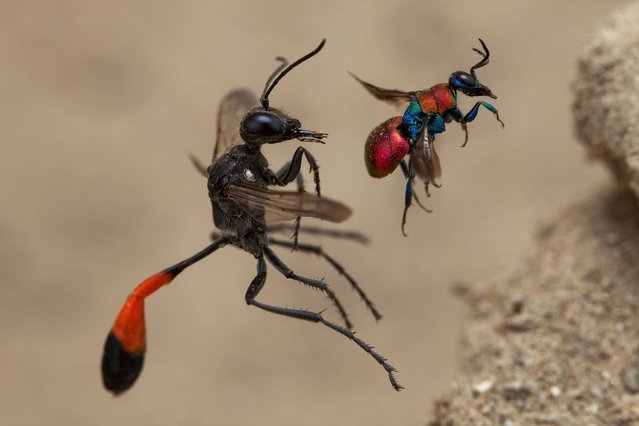 Winner – Behaviour, Invertebrates: A tale of two wasps by Frank Deschandol, France. This remarkable simultaneous framing of a red-banded sand wasp (left) and a cuckoo wasp, about to enter next-door nest holes in Normandy, France. Though these two species don’t regularly interact, Deschandol was gifted a perfectly balanced composition by the insects’ fortuitous flight paths to their nest holes. (Photo by Frank Deschandol/Wildlife Photographer of t
he Year 2020) 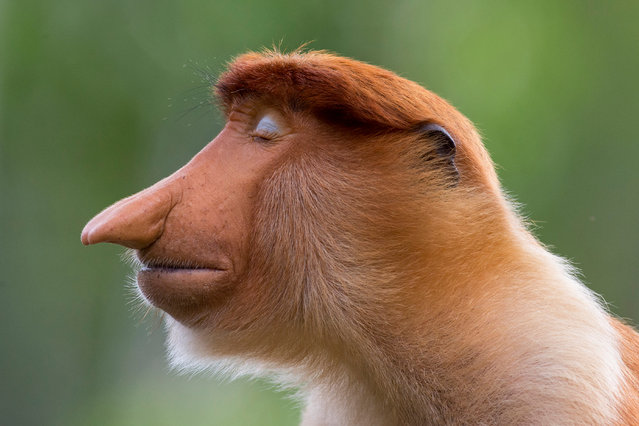 Winner – Animal Portraits: The pose by Mogens Trolle, Denmark. A young male proboscis monkey cocks his head slightly and closes his eyes. Unexpected pale blue eyelids now complement his immaculately groomed auburn hair. He poses for a few seconds as if in meditation. He is a wild visitor to the feeding station at Labuk Bay Proboscis Monkey Sanctuary in Sabah, Borneo – “the most laid-back character”, says Trolle, “quite unlike anything I’ve ever seen on another monkey” – connects us, he hopes, with a fellow primate. (Photo by Mogens Trolle/Wildlife Photographer of the Year 2020) 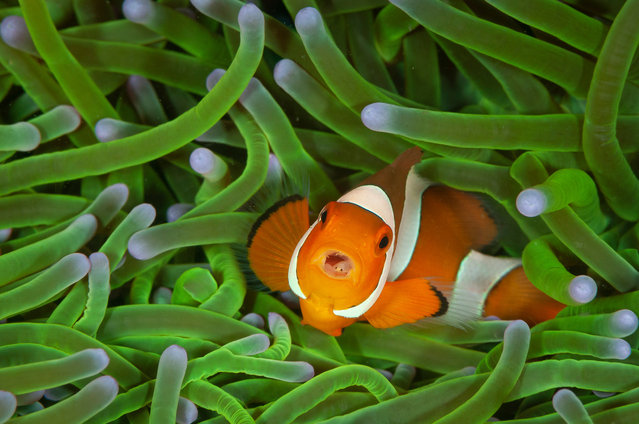 Winner – 11 to 14 years old: A mean mouthful by Sam Sloss, Italy/USA. On a diving holiday in north Sulawesi, Indonesia, Sam stopped to watch the behaviour of a group of clownfishes around their home, a magnificent anemone. It was only when he downloaded the photos that he saw tiny eyes peeping out of its mouth. It was a “tongue-eating louse”, a parasitic isopod that swims in through the gills as a male, changes sеx, grows legs and attaches itself to the base of the tongue, sucking blood. When the tongue withers and drops off, the isopod takes its place. (Photo by Sam Sloss/Wildlife Photographer of the Year 2020) 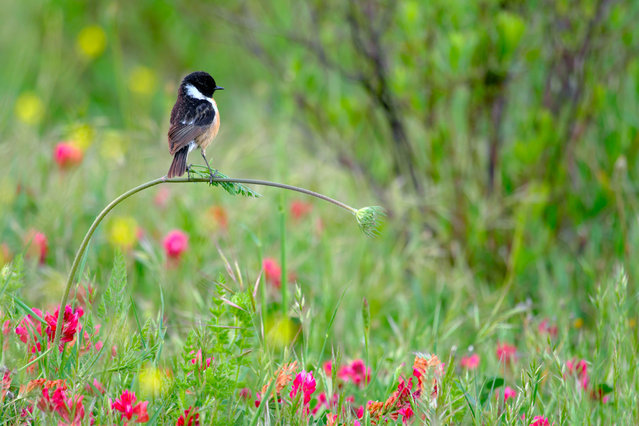 Winner – 10 years and under: Perfect balance by Andrés Luis Dominguez Blanco, Spain. In spring, the meadows near Andrés’ home in Ubrique, in Andalucia, Spain, are bright with flowers, such as these sweet-scented sulla vetches. Late one day, he watched this male closely. It often landed on branches or the top of small bushes, but this time it perched on a flower stem, which began to bend under its delicate weight. The stonechat kept perfect balance and Andrés framed his perfect composition. (Photo by Andrés Luis Dominguez Blanco/Wildlife Photographer of the Year 2020) 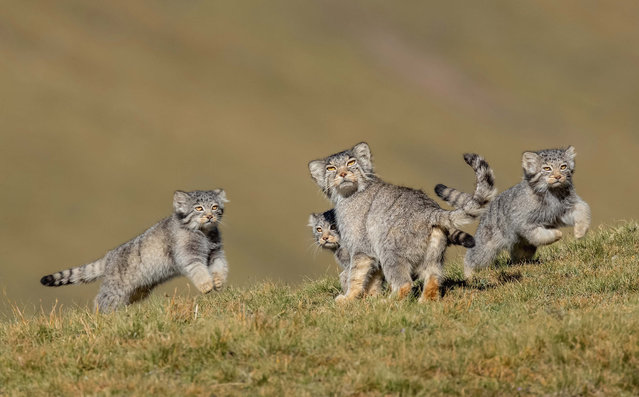 Winner – Behaviour, Mammals: When mother says run by Shanyuan Li, China. This rare picture of a family of Pallas’s cats, or manuls, on the remote steppes of the Qinghai–Tibet Plateau in northwest China is the result of six years’ work at high altitude. These small cats are normally solitary, hard to find and mostly active at dawn and dusk. (Photo by Shanyuan Li/Wildlife Photographer of the Year 2020) 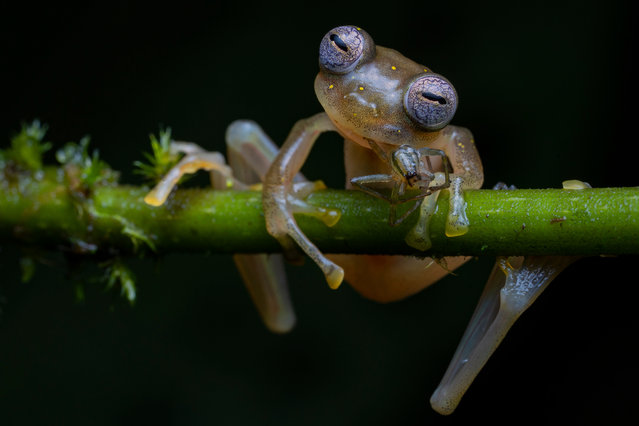 Winner – Behaviour, Amphibians and Reptiles: Life in the balance by Jaime Culebras, Spain. A Manduriacu glass frog snacks on a spider in the foothills of the Andes, northwestern Ecuador. After a four hour trek in the rain, Culebras was thrilled to spot one small frog clinging to a branch, its eyes like shimmering mosaics. This is the first picture of this newly discovered species feeding. (Photo by Jaime Culebras/Wildlife Photographer of the Year 2020) 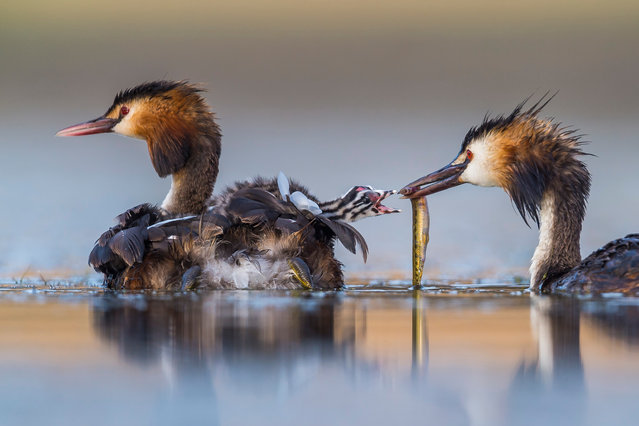 Winner – Behaviour, Birds: Great crested sunrise by Jose Luis Ruiz Jiménez, Spain. After several hours up to his chest in water in a lagoon near Brozas, in the west of Spain, Jiménez captured this intimate moment of a great crested grebe family. His camera floated on a U-shaped platform beneath the small camouflaged tent that also hid his head. (Photo by Jose Luis Ruiz/Wildlife Photographer of the Year 2020) 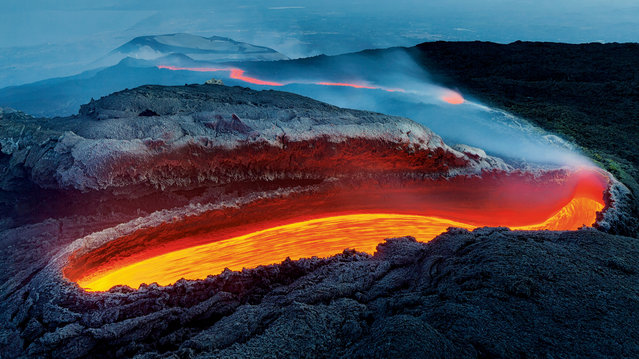 Winner – Earth’s Environments: Etna’s river of fire by Luciano Gaudenzio, Italy. From a great gash on the southern flank of Mount Etna, lava flows within a huge lava tunnel, re-emerging further down the slope as an incandescent red river, veiled in volcanic gases. Gaudenzio described the vent as resembling “an open wound on the rough and wrinkled skin of a huge dinosaur”. (Photo by Luciano Gaudenzio/Wildlife Photographer of the Year 2020) 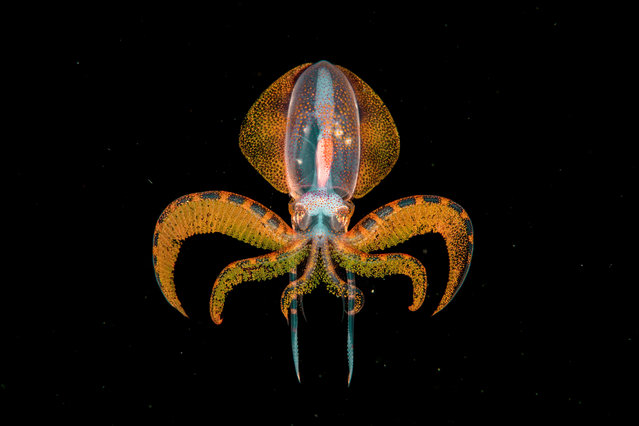 Winner – Under Water: The golden moment by Songda Cai, China. A tiny diamondback squid paralarva flits below in the blackness, stops hunting for an instant when caught in the light beam, gilds itself in shimmering gold and then moves gracefully out of the light. The beam was Songda’s, on a night‑dive over deep water, far off the coast of Anilao, in the Philippines. (Photo by Songda Cai/Wildlife Photographer of the Year 2020) 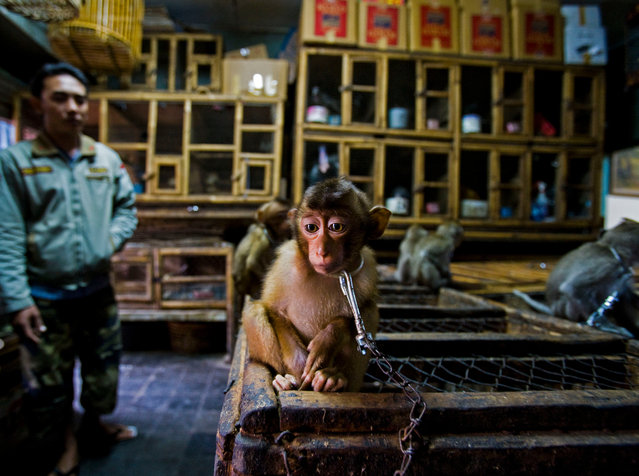 Winner – Wildlife Photojournalist Story Award: Backroom business by Paul Hilton, UK/Australia. A young pig-tailed macaque is put on show chained to a wooden cage in Bali’s bird market, Indonesia. They are energetic, social primates living in large troops in forests throughout south-east Asia. As the forests are destroyed, they increasingly raid agricultural crops and are shot as pests. The babies are then sold into a life of solitary confinement as a pet, to a zoo or for biomedical research. (Photo by Paul Hilton/Wildlife Photographer of the Year 2020) 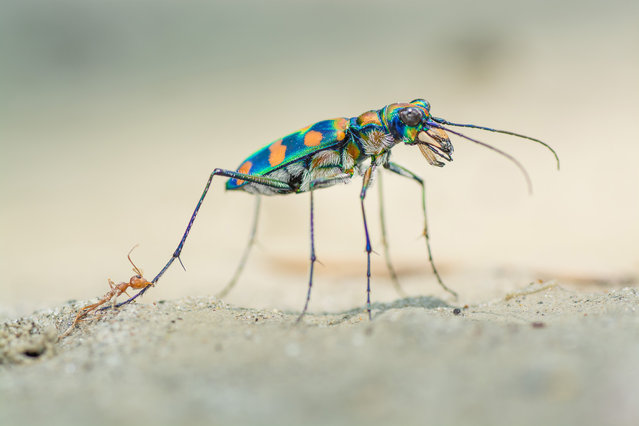 Winner – Portfolio Award: The last bite by Ripan Biswas, India. These two ferocious predators don’t often meet. The giant riverine tiger beetle pursues prey on the ground, while weaver ants stay mostly in the trees – but if they do meet, both need to be wary. “The beetle kept pulling at the ant’s leg”, says Biswas, “trying to rid itself of the ant’s grip, but it couldn’t quite reach its head”. (Photo by Ripan Biswas/Wildlife Photographer of the Year 2020) 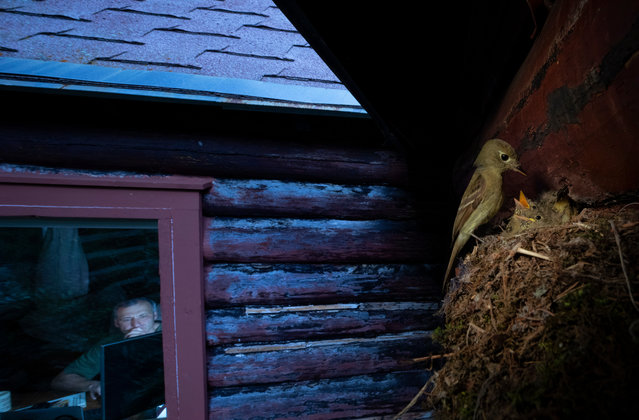 Winner – Urban Wildlife. Watching you watching them by Alex Badyaev, Russia/USA. The Cordilleran flycatcher is declining across North America as the changing climate causes shrinkage of habitats along its migratory routes. In Montana’s Rocky Mountain Front, it nests in crevices and on canyon shelves. But one pair picked this research cabin instead. So as not to disturb the birds, Badyaev hid his camera behind a piece of bark on a tree leaning against the cabin. He directed a flash towards the trunk (so the scene would be illuminated by reflection) and operated the set-up remotely from the cabin. (Photo by Alex Badyaev/Wildlife Photographer of the Year 2020) 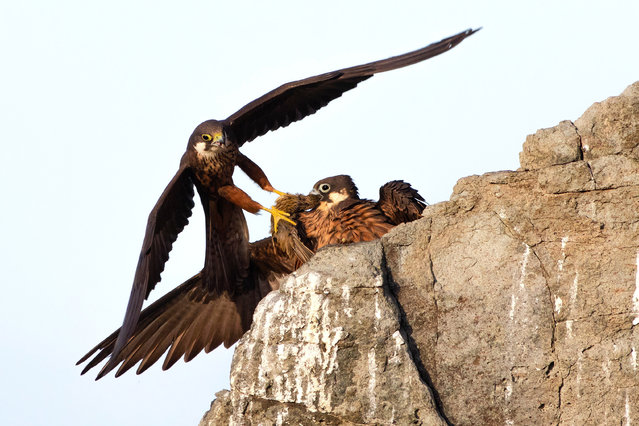 Winner – 2020, Rising Star Portfolio: Eleonora’s gift by Alberto Fantoni, Italy. On the steep cliffs of a Sardinian island, a male Eleonora’s falcon brings his mate food – a small migrant, probably a lark, snatched from the sky as it flew over the Mediterranean. (Photo by Alberto Fantoni/Wildlife Photographer of the Year 2020) 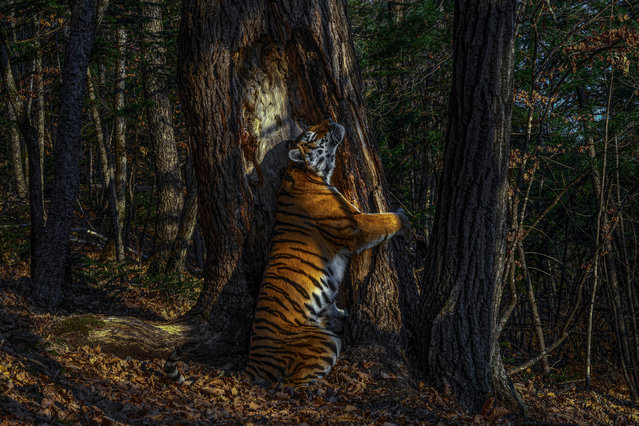 Winner – Animals in their Environment and Garand Title Winner: The embrace by Sergey Gorshkov, Russia. With an expression of sheer ecstasy, a tigress hugs an ancient Manchurian fir, rubbing her cheek against bark to leave secretions from her scent glands. She is an Amur, or Siberian, tiger, here in the Land of the Leopard National Park. Gorshkov installed his first proper camera trap in January 2019, opposite this grand fir. But it was not until November that he achieved the picture he had planned for, of a magnificent tigress in her Siberian forest environment. (Photo by Sergey Gorshkov/Wildlife Photographer of the Year 2020)
Edit Del
16 Oct 2020 00:03:00, post received 0 comments
Publication archive:
←   →
Popular tags:
All tags
Last searches: