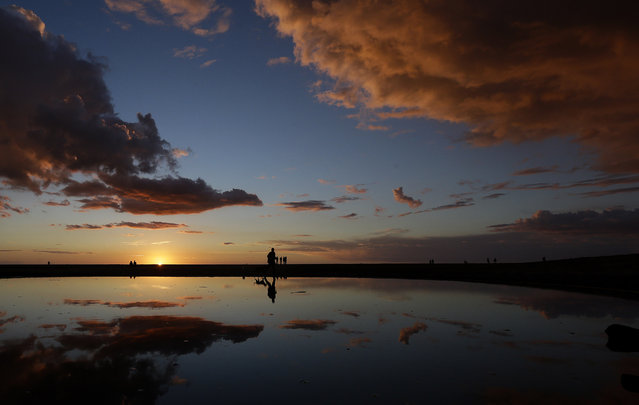 A man walks his dogs past a puddle as the sun sets at Ocean Beach in San Francisco, Saturday, February 28, 2015. (Photo by Jeff Chiu/AP Photo) 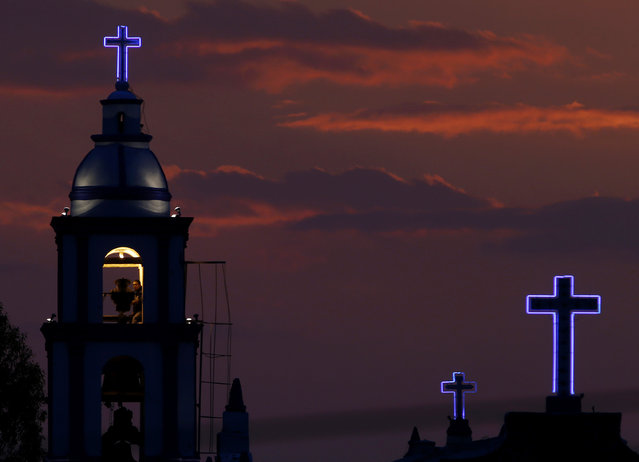 A man rings the bells on the tower of the Santa Maria Magdalena Church, Saturday, May 2, 2015, in Tepexpan, Mexico. The town will kick off its annual patronage celebration to venerate the town's saint “El Señor de Gracias” on May 3. (Photo by Julio Cortez/AP Photo) 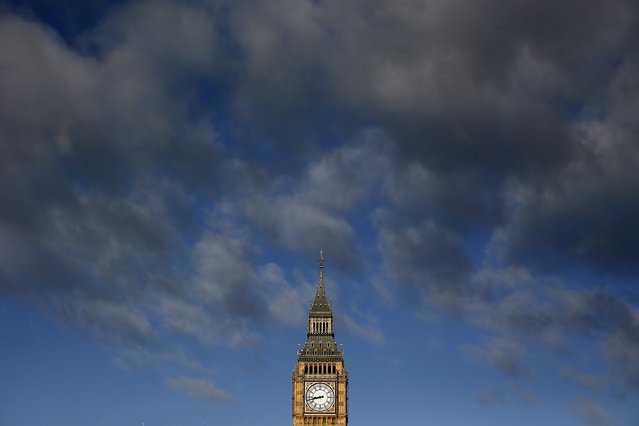 The Big Ben clock is seen during sunrise in London March 30, 2015. (Photo by Stefan Wermuth/Reuters) 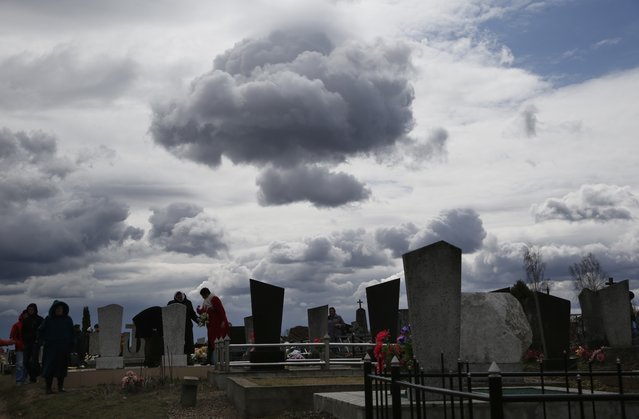 Belarusians stand near the graves of their relatives, during an Orthodox Christian tradition, in a cemetery in the town of Novogrudok, 150 kms, 93 miles, west of Minsk, Belarus, Tuesday, April 21, 2015. (Photo by Sergei Grits/AP Photo) 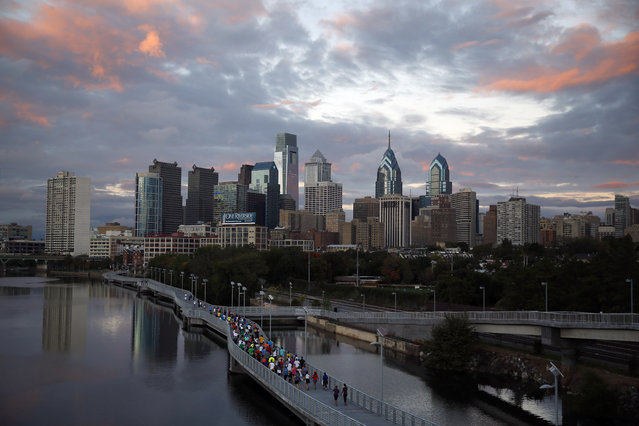 In this October 1, 2014 file photo, runners jog along the Schuylkill Banks Boardwalk in Philadelphia. (Photo by Matt Slocum/AP Photo) 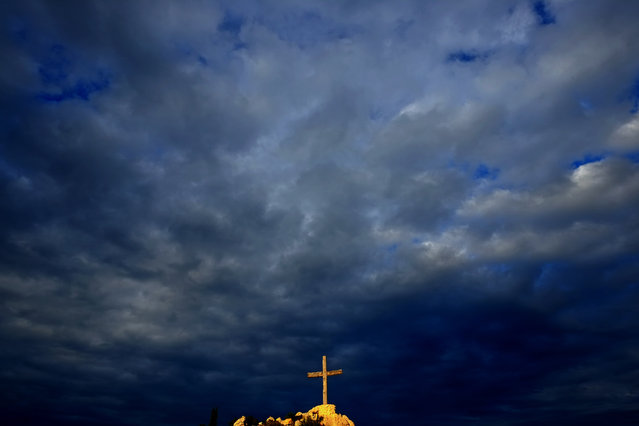 Clouds rise over the wooden cross on a hill rock at Ayios Epiphanios Christian Orthodox church in southeast coastal resort of Ayia Napa, Cyprus, Saturday, April 11, 2015. Orthodox Christians are observing Holy Week before celebrating Easter on Sunday. In Cyprus on holy Saturday, the traditional Easter bonfires, or “lambradjia”, are lit to burned effigies of Judas Hiscariot, the disciple thought to have betrayed Jesus. (Photo by Petros Karadjias/AP Photo) 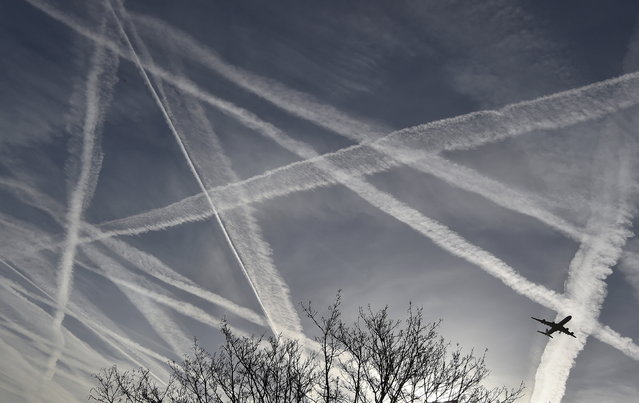 A passenger plane flies through aircraft contrails in the skies near Heathrow Airport in west London, April 12, 2015. (Photo by Toby Melville/Reuters) 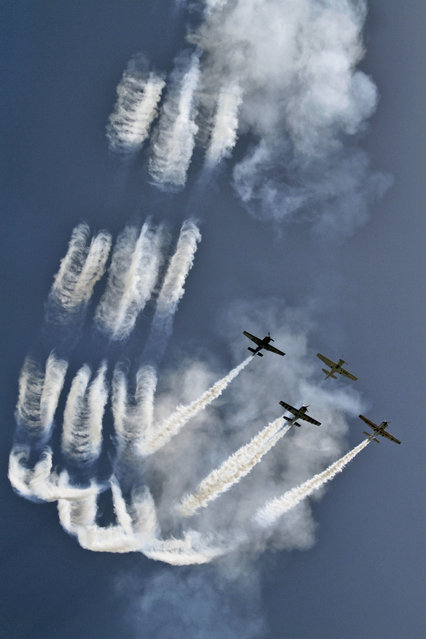 Aircrafts of British Aerobatics Champions perform during rehearsals on the eve of the Gujarat Aero Conclave 2015 in Ahmadabad, India, Tuesday, March 31, 2015. (Photo by Ajit Solanki/AP Photo) 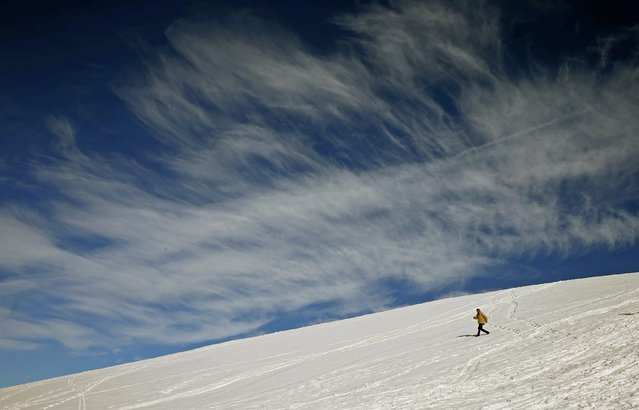 A man walks down a snow-covered hill during sunny winter weather near the village of Schindellegi, south of Zurich February 13, 2015. (Photo by Arnd Wiegmann/Reuters) 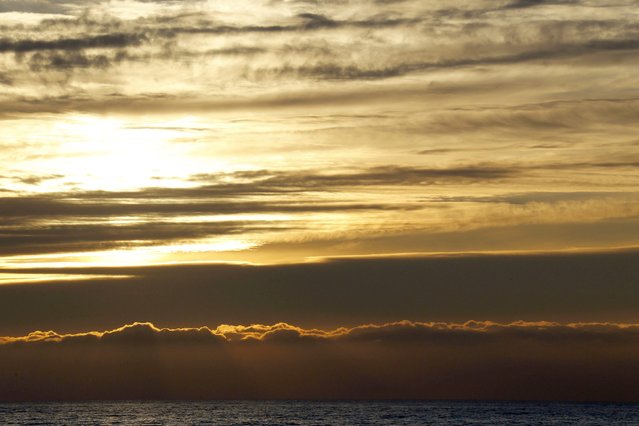 The Atlantic Ocean is pictured at sunset near Cap Ferret in southwestern France February 19, 2015. (Photo by Regis Duvignau/Reuters) 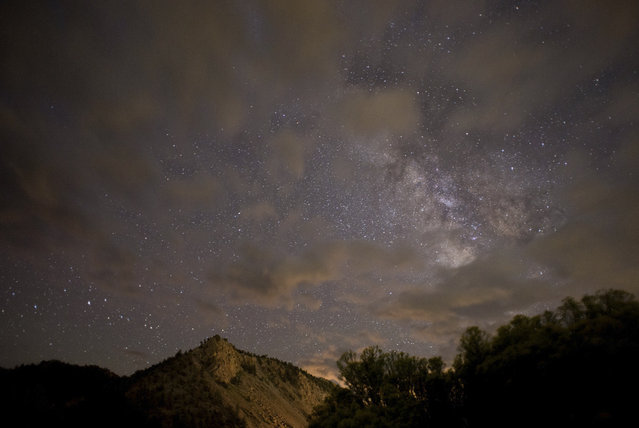 A portion of Browns Canyon, located 90 miles (145 km) west of Colorado Springs, Colorado, is pictured in this undated handout photo provided by Trout Unlimited and obtained by Reuters on February 19, 2015. (Photo by Reuters/Trout Unlimited) 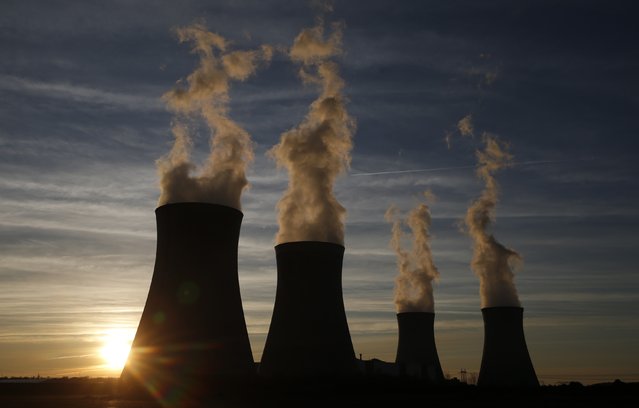 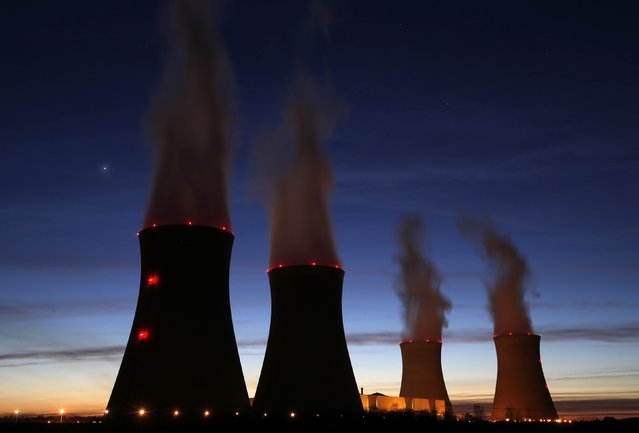 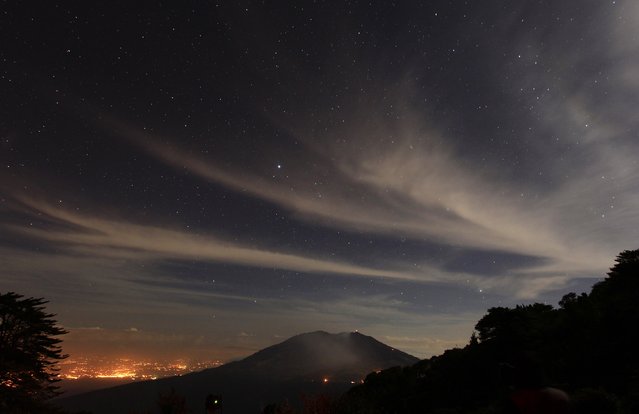 A long exposure photo shows stars above Turrialba volcano, in San Gerardo de Irazu near Turrialba March 13, 2015. Costa Rica's Turrialba volcano belched a column of gas and ash up to 3,280 feet (1 km) into the air on Thursday in its most powerful eruption in two decades, and local authorities started to evacuate residents from the surrounding area. (Photo by Juan Carlos Ulate/Reuters) 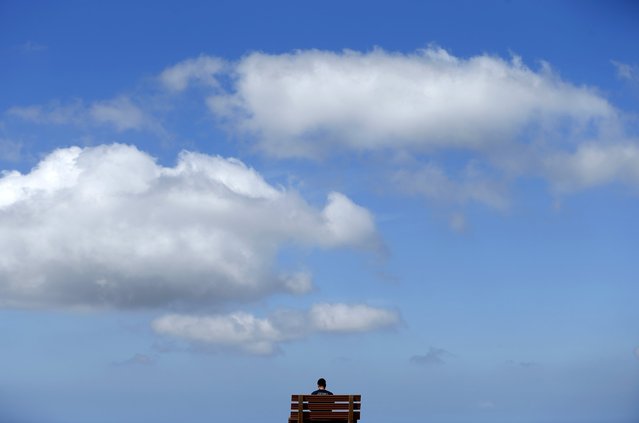 A young man sits high atop a hill reading a book on a park beach as the clouds pass overhead in San Marco, California March 23, 2015. (Photo by Mike Blake/Reuters) 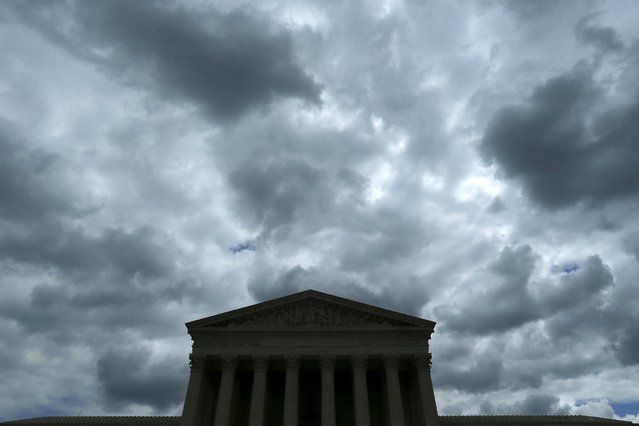 A cloudy sky aboce the U.S. Supreme Court building the day before arguments in the same-s*x marriage case Obergefell v. Hodges, is pictured in Washington April 27, 2015. (Photo by Jonathan Ernst/Reuters) 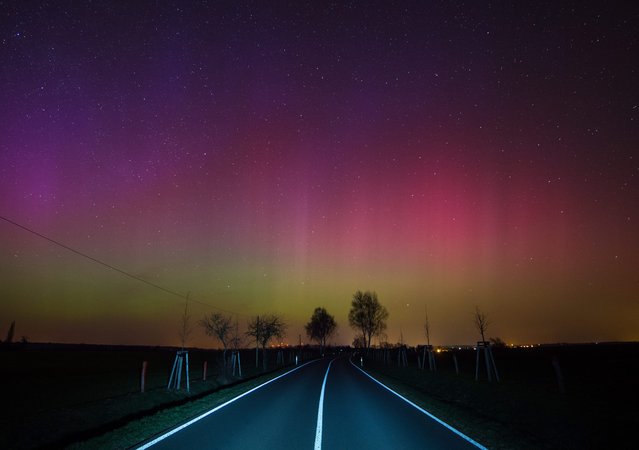 Northern Lights observed in the night sky on a country road near Lietzen in Maerkisch-Oderland, Germany, 17 March 2015. The Northern Lights (Aurora borealis) were generated by a gigantic cloud of electrically charged particles of solar storm in the Earth's atmosphere. The color effect is strengthened somewhat by the digital camera on a long exposure of about 20 seconds. (Photo by Patrick Pleul/EPA) 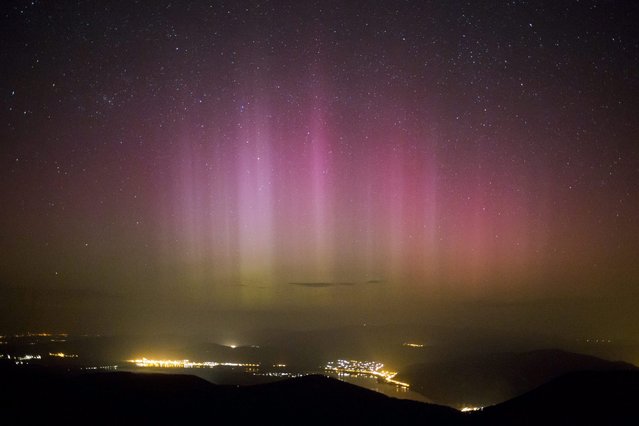 The Northern Lights (Aurora borealis) are seen on the sky above Pilisszentkereszt, 26 kms north of Budapest, Hungary, 18 March 2015. An aurora is a phenomenon where natural light, caused by charged particles, is displayed in the skies mainly over the high latitude Arctic and Antarctic regions. (Photo by Balazs Mohai/EPA) 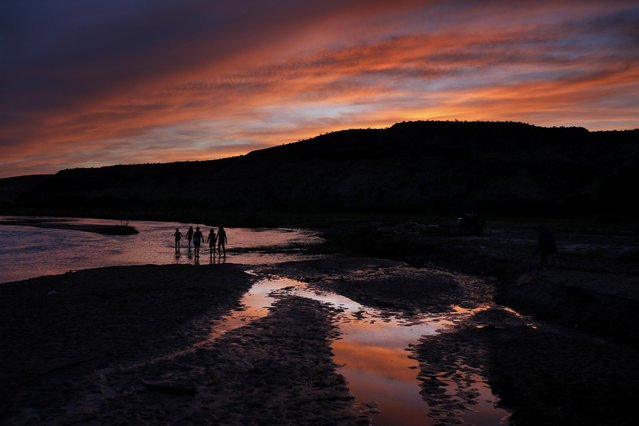 Kids play in the Virgin River during an event Friday, April 10, 2015, in Bunkerville, Nev. (Photo by John Locher/AP Photo) 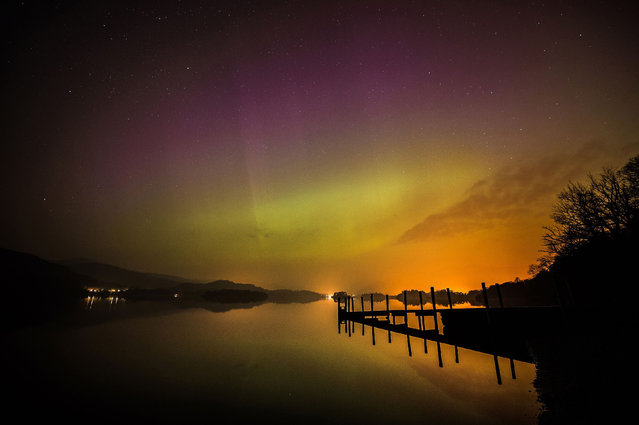 The aurora borealis, or the northern lights, over Derwent water near Keswick, England, Wednesday March 18, 2015. The northern lights are the result of collisions between gaseous particles in the Earth's atmosphere with charged particles released from the sun. (Photo by Owen Humphreys/AP Photo/PA Wire) 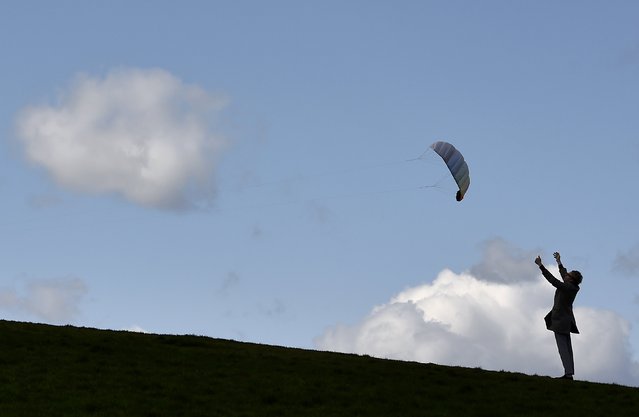 A man launches a kite during strong winds at Parliament Hill in north London March 31, 2015. (Photo by Toby Melville/Reuters) 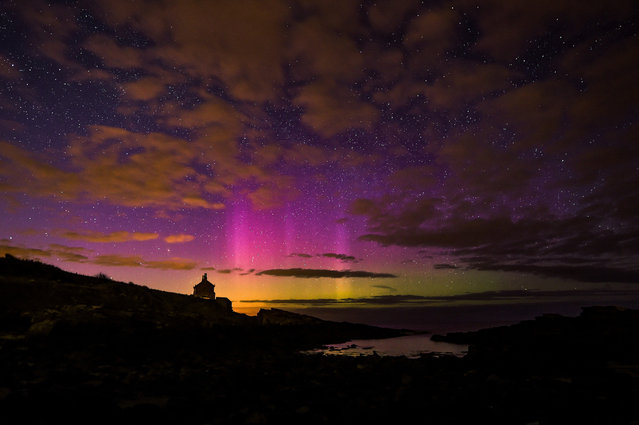 The aurora borealis, or the northern lights as they are commonly known, takes place over the Bathing House in Howick, Northumberland, on April 16, 2015. (Photo by Owen Humphreys/PA Wire) 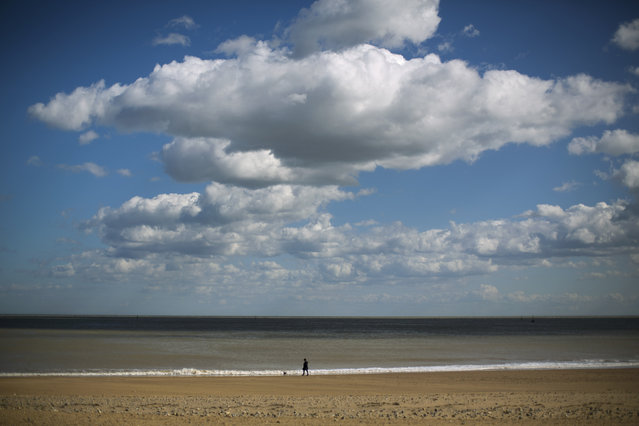 A woman walks a dog on the beach in Ramsgate, England, Tuesday, March 31, 2015. (Photo by Matt Dunham/AP Photo) 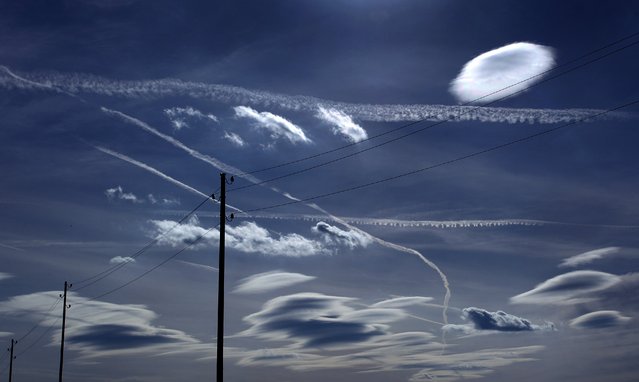 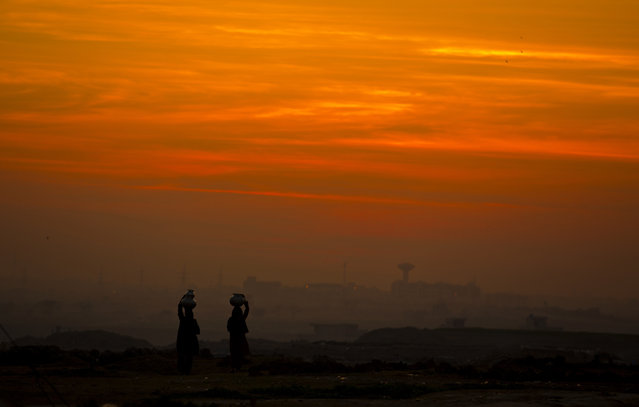 Pakistani nomad women carry water to their houses at dusk in Islamabad, Pakistan, Thursday, February 12, 2015. People living in suburbs of the capital are lacking basic necessities of life. (Photo by B. K. Bangash/AP Photo) 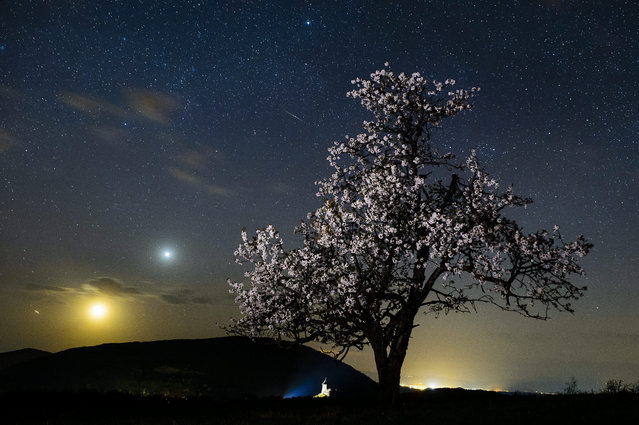 A meteorite burns up in the atmosphere as seen in this photo taken near of Salgotarjan, 109 kms northeast of Budapest, Hungary, late 21 April 2015. The Moon and Venus can be seen on the left. (Photo by Peter Komka/EPA) 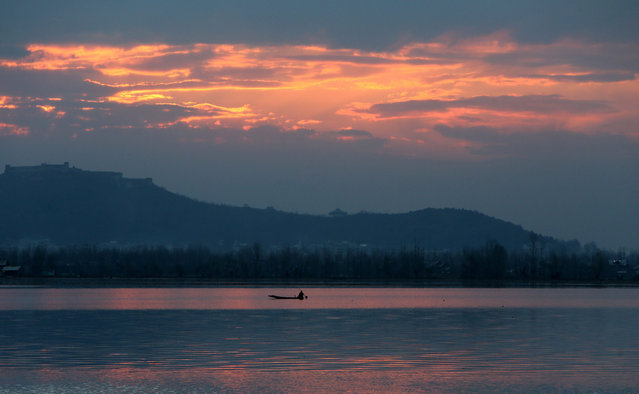 A Kashmir boatman rows a boat at sunset in world famous Dal Lake in Srinagar, the capital of Indian Kashmir, 20 March 2015. Weather was bright and sunny in Srinagar after a week of bad weather conditions. (Photo by Farooq Khan/EPA) 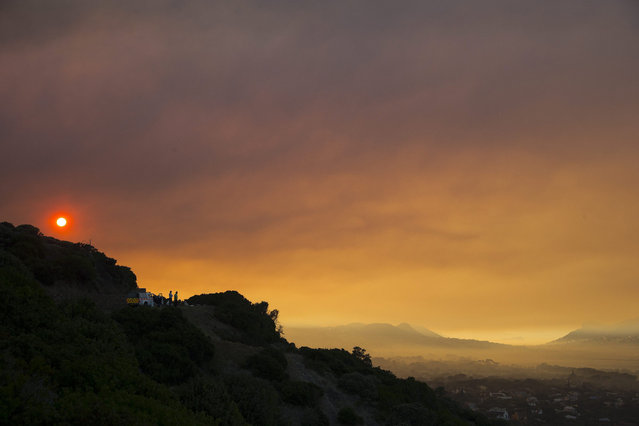 The sun rises through thick smoke hanging over the Noordhoek Valley from a Fynbos vegetation fire on the World Heritage site Table Mountain National Park three days after it started in Muizenberg, Cape Town, South Africa, 03 March 2015. A fire fanned by gale force south easterly winds has destroyed over 3000 hectares of land and some homes around the Cape Town south peninsula from Muizenberg to Hout Bay. Residents in some areas were forced to evacuate. Rescue personel continue to battle the blaze. (Photo by Nic Bothma/EPA) 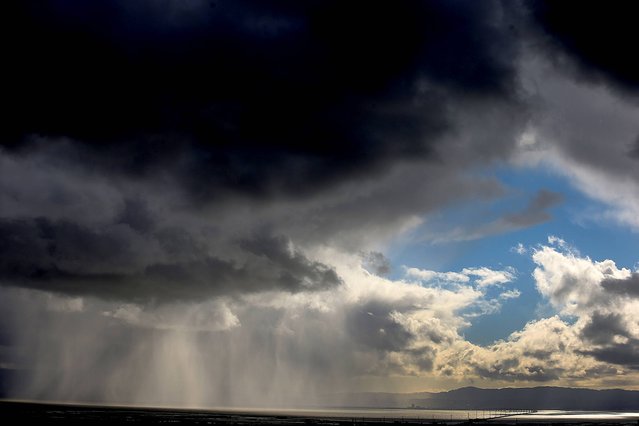