Charming Afghanistan: Dogs of War Part 1
Throughout the course of the long war in Afghanistan, Coalition troops have relied on thousands of military working dogs to help keep them safe, and make their jobs easier. The dogs are trained to detect explosives, to find illegal drugs, to search for missing comrades, or target enemy combatants. Not only are they active on the front lines, but behind the lines they serve as therapy dogs, service dogs, and loyal companions. They also share the same risks as the ground troops, suffering injuries and sometimes death on the battlefields. Gathered here are images of these dogs and their handlers in Afghanistan and back home, from over the past several years, part of the ongoing series here on Afghanistan. 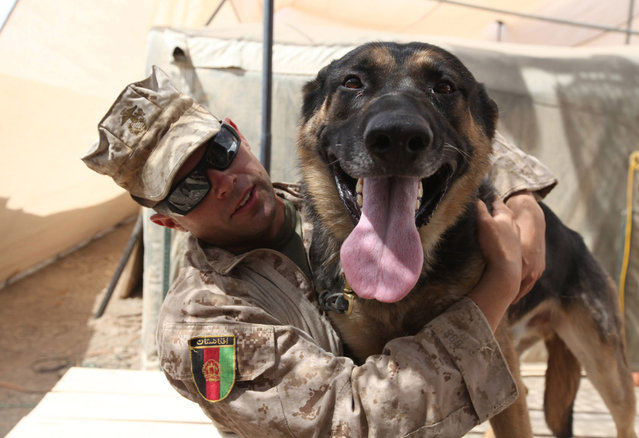 Lance Cpl. Jeremy D. Angenend, combat tracker handler, Military Police, III Marine Expeditionary Force, and his dog Fito play around at Camp Leatherneck, Afghanistan. Angenend and Fito have been partnered for two years. Angenend says that he and Fito have the same kind of goofy, outgoing personalities and they have fun together. "He never has a bad day," says Angenend, "I want no other dog." (USMC/Sgt. Megan Sindelar) 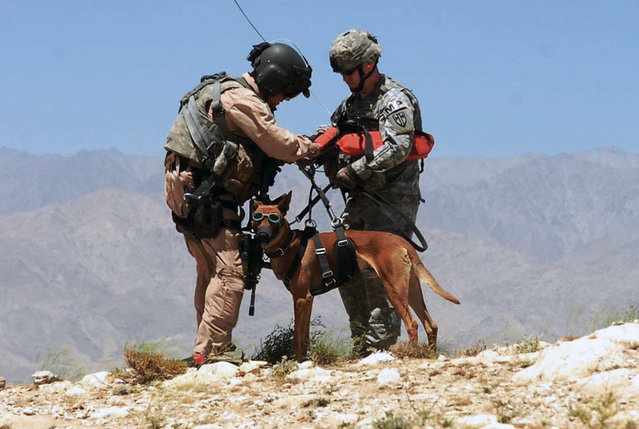 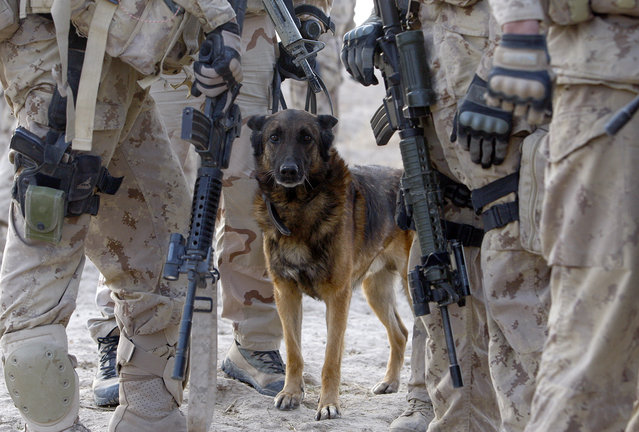 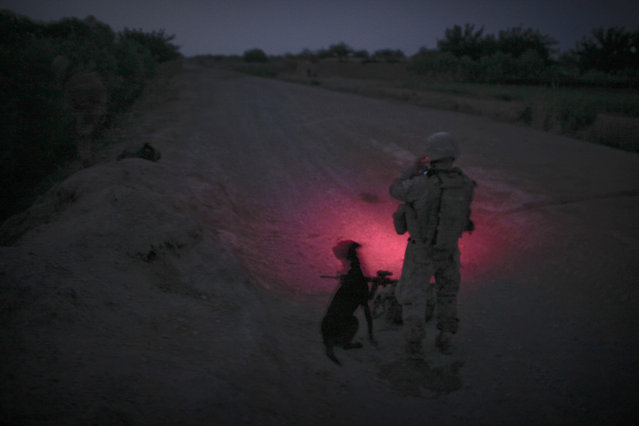 US Marine of 3rd Battalion, 6th Marines, waits for the arrival of an anti-explosives squad team after a roadside bomb was discovered by his sniffer dog, during a 48-hour operation in Marjah, Helmand province, southern Afghanistan, on April 1, 2010. (Mauricio Lima/AFP/Getty Images) 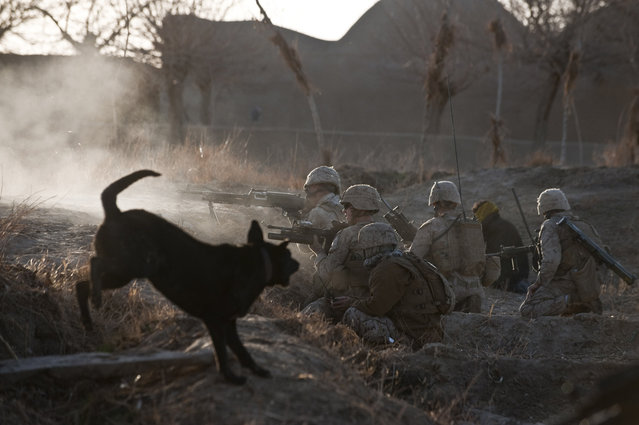 US Marines from 1st Battalion, 8th Marines fire at alleged Taliban fighters as their dog runs around outside new Mirage base, on the south of Musa Qala District, Helmand province on February 4, 2011. (Dmitry Kostyukov/AFP/Getty Images) 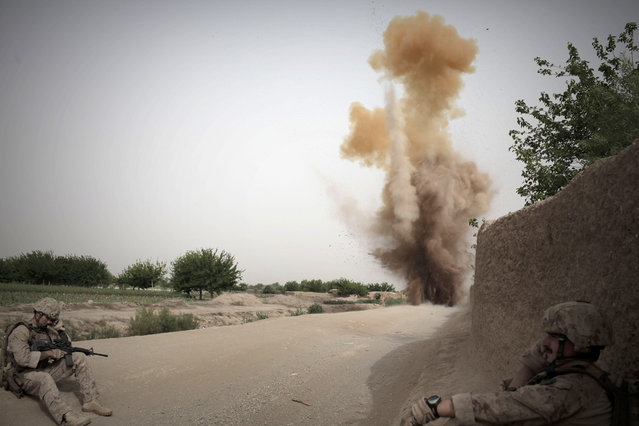 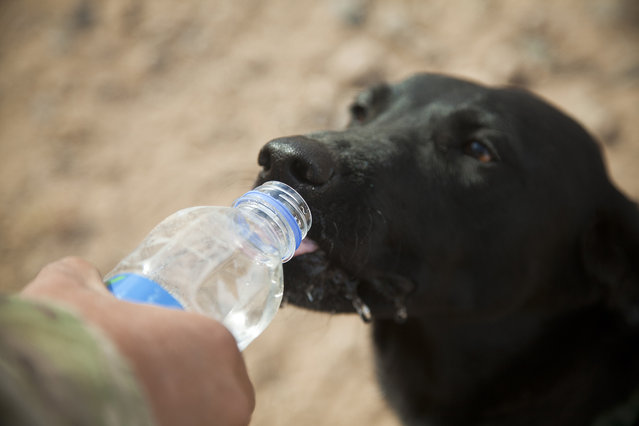 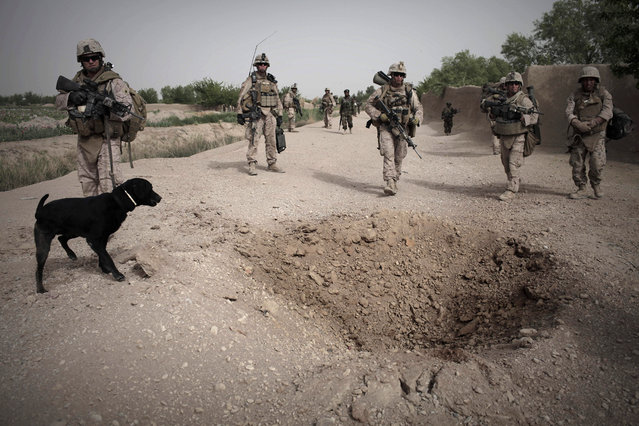 US Marine anti-explosives squad members check a crater after their anti-explosives squad team blew up a roadside bomb discovered by their sniffer dog in Marjah, Helmand province, on April 1, 2010. A single Afghan man was detained with a scratch map and a mobile number written on his hand nearby the site where the roadside bomb was found. (Mauricio Lima/AFP/Getty Images) 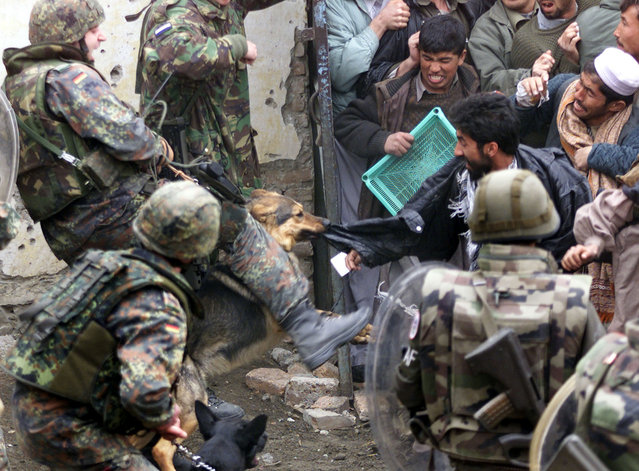 A dog belonging to a German soldier bites an Afghan during riots prior to a soccer match in Kabul's main stadium, on February 15, 2002. The match was to be a goodwill game between peacekeepers and an Afghan team when an overflow crowd began fighting their way through the gates, and Afghan police beat back the crowd with tree branches, strips of rubber, and the butts of their rifles, injuring at least 50 people, according to German peacekeeping medics. (AP Photo/Lefteris Pitarakis) 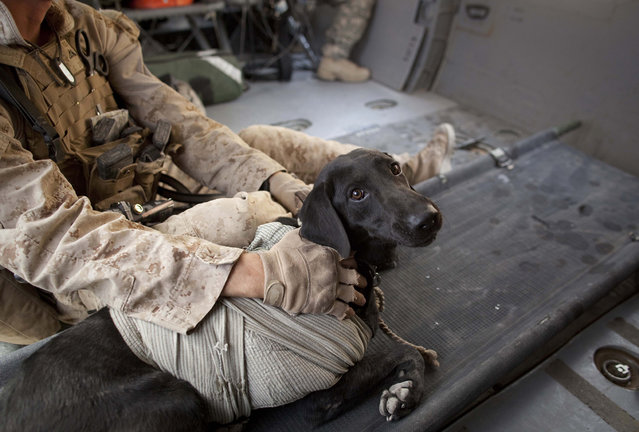 A U.S. Marine dog handler attends to his his Improvised Device Detection Dog, after he was injured and rescued by a helicopter of the U.S. Army Task Force Lift "Dust Off", Charlie Company 1-214 Aviation Regiment, on the outskirts of Sangin, in the Helmand Province on June 3, 2011. (AP Photo/Anja Niedringhaus) 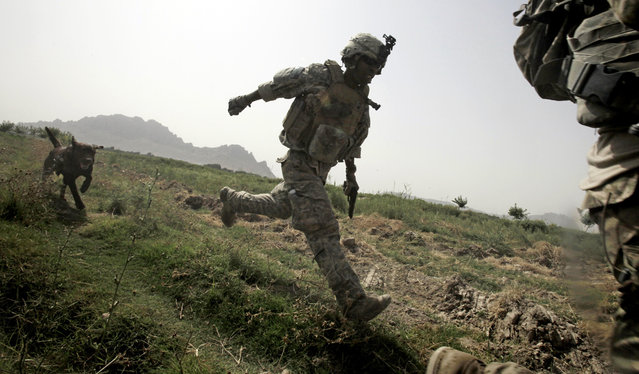 Dog handler Sergeant Justin McGhee and his dog Archie, with the US Army's 67th Engineer Detachment, run for cover during a gun battle with suspected Taliban militants near the village of Jilga in Arghandab District north of Kandahar on July 8, 2010. (Reuters/Bob Strong) 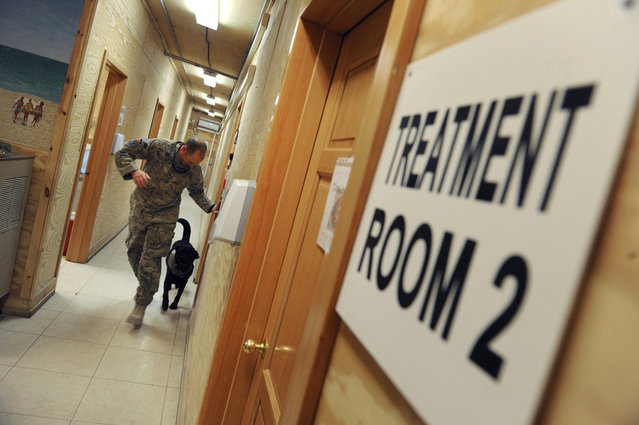 US Army occupational therapist Sergeant Paul McCollough and Zeke, a therapy dog, at the Role 2 medical clinic in Kandahar military base, southern Afghanistan, on August 19, 2011. Zeke, a five year old labrador retriever who has a rank of Sergeant First Class, is trained to help soldiers struggling with stress and war trauma. Therapy dogs were first introduced in the war zone in Iraq in 2007 to replicate the psychological benefits the troops gain from US homeland care facilities employing specially trained dogs. (Romeo Gacad/AFP/Getty Images) 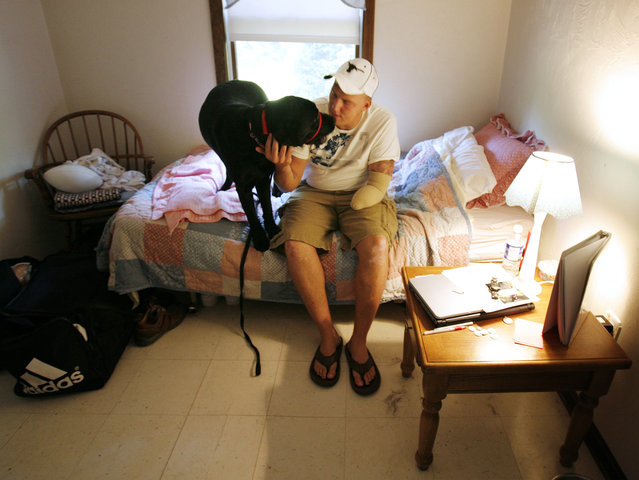 U.S. Army Specialist Joe Keck, who lost his left arm in a vehicle accident in Afghanistan in July 2006, and his new service dog Nolls sit on his bed at the residence at the National Education for Assistance Dog Service (NEADS) training facility in Princeton, Massachusetts, on June 25, 2007. (Reuters/Brian Snyder) 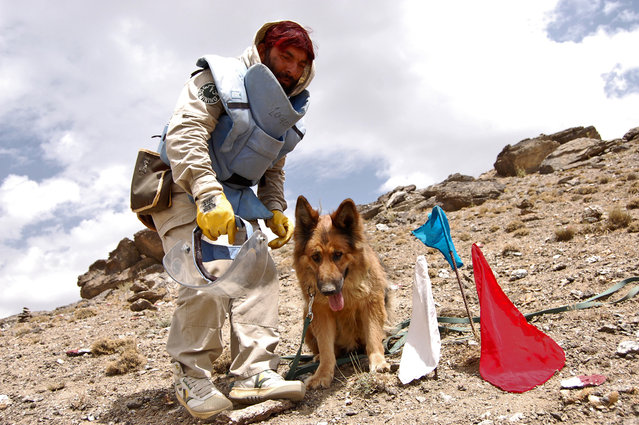 An Afghan deminer working with a dog on the outskirts of Kabul, on September 13, 2012. (Daud Yardost/AFP/Getty Images) 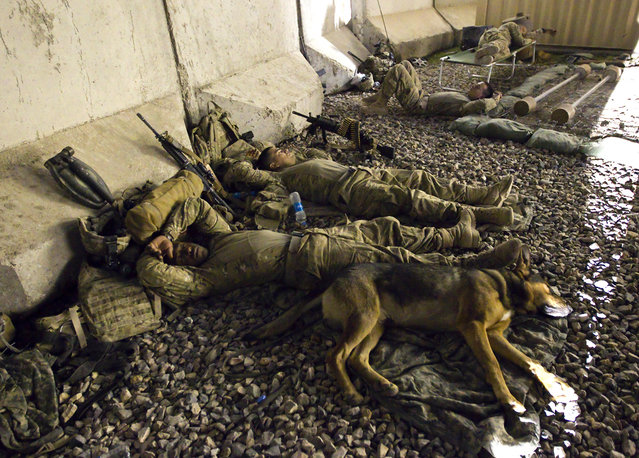 U.S. Army soldiers of 82nd Airborne Division and sniffer dog Alex sleep in a compound of Afghan security forces at night before a mission in Zahri district of Kandahar province, on May 30, 2012. (Reuters/Shamil Zhumatov) 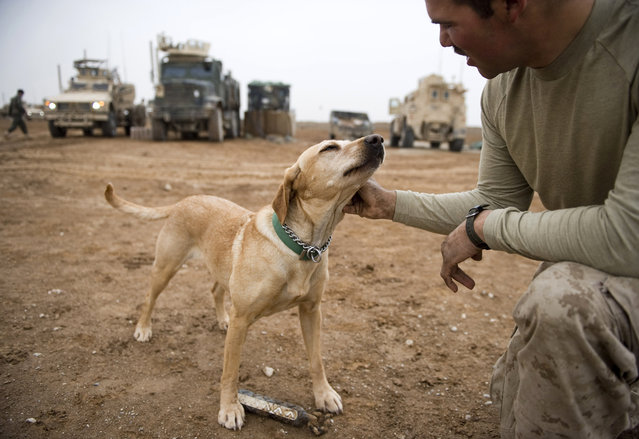 A US Marine from 1st Battalion, 8th Marines plays with a trained dog at Shagali patrol base, in Musa Qala District, Helmand province on February 3, 2011. Each trained dog used for special purposes in the military can cost 70,000 USD or more. (Dmitry Kostyukov/AFP/Getty Images) 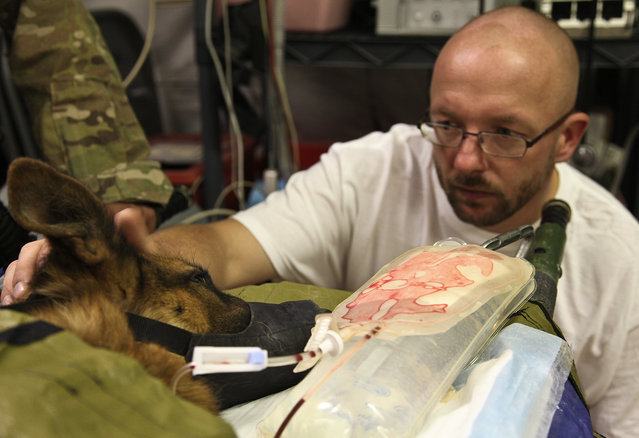 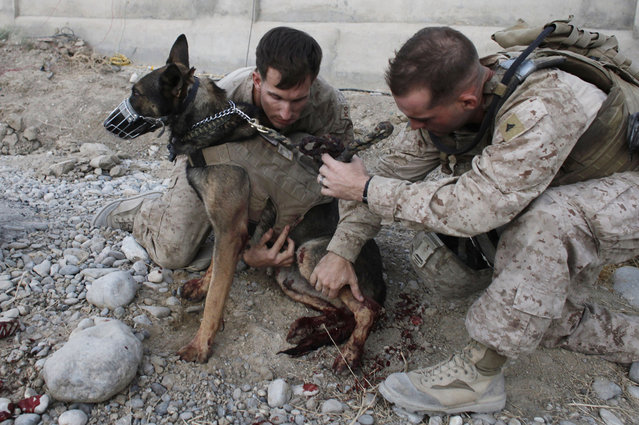 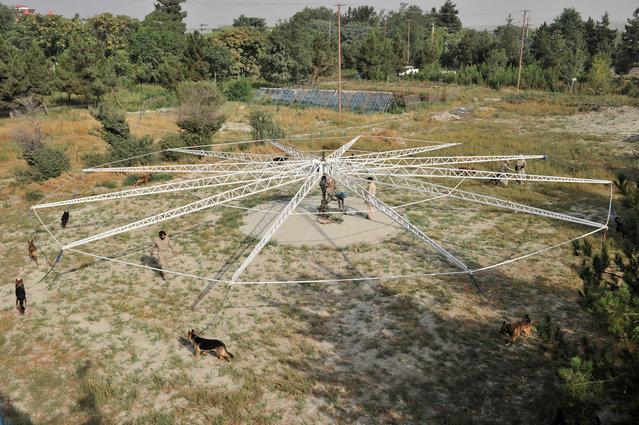 Demining dogs work out at the Mine Detection and Dog Center (MDC) in Kabul on August 28, 2012. The center maintains around 200 dogs, some of them operational, some under training. (Massoud Hossaini/AFP/Getty Images)