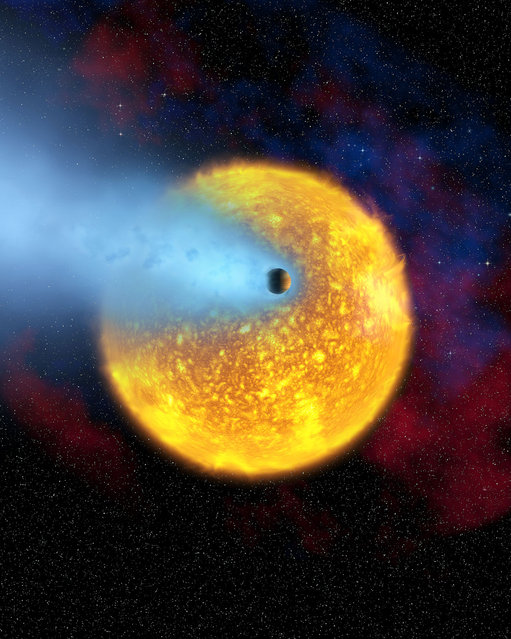 Astronomers using the NASA/ESA Hubble Space Telescope have seen dramatic changes in the upper atmosphere of a faraway planet. Just after a violent flare on its parent star bathed it in intense X-ray radiation, the planet's atmosphere gave off a powerful burst of evaporation. The observations give a tantalizing glimpse of the changing climates and weather on planets outside our solar system. 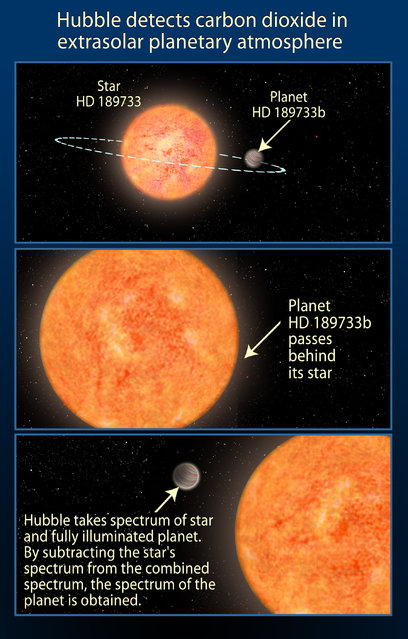 Astronomer Alain Lecavelier des Etangs (CNRS-UPMC, France) and his team used Hubble to observe the atmosphere of exoplanet HD 189733b during two periods in early 2010 and late 2011, as it was silhouetted against its parent star. While backlit in this way, the planet's atmosphere imprints its chemical signature on the starlight, allowing astronomers to decode what is happening on scales that are too tiny to image directly. The observations were carried out in order to confirm what the team had previously seen once before in a different planetary system: the evaporation of an exoplanet's atmosphere.

HD 189733b has a blue sky, but that's where the similarities with Earth stop. The planet is a huge gas giant similar to Jupiter, but it lies extremely close to its star, just one thirtieth the distance Earth is from the Sun. Even though its star is slightly smaller and cooler than the Sun, this makes the planet's climate exceptionally hot, at above 1000 degrees Celsius, and the upper atmosphere is battered by energetic extreme-ultraviolet and X-ray radiation. As such, it is an excellent candidate to study the effects of a star on a planetary atmosphere. 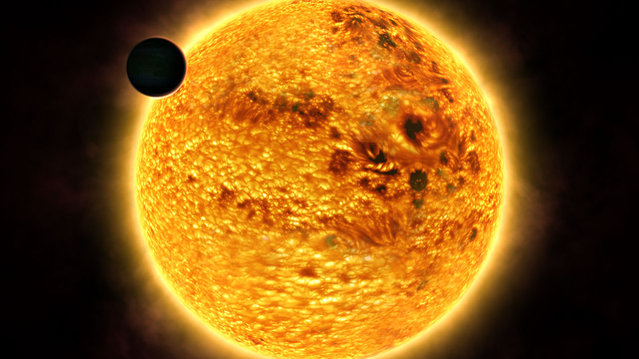 “The first set of observations were actually disappointing”, Lecavelier says, “since they showed no trace of the planet's atmosphere at all. We only realised we had chanced upon something more interesting when the second set of observations came in”.

The team's follow-up observations, made in 2011, showed a dramatic change, with clear signs of a plume of gas being blown from the planet at a rate of at least 1000 tonnes per second. “We hadn't just confirmed that some planets' atmospheres evaporate”, Lecavelier explains, “we had watched the physical conditions in the evaporating atmosphere vary over time. Nobody had done that before”.

The next question was: why the change? Despite the extreme temperature of the planet, the atmosphere is not hot enough to evaporate at the rate seen in 2011. Instead the evaporation is thought to be driven by the intense X-ray and extreme-ultraviolet radiation from the parent star, HD 189733A, which is about 20 times more powerful than that of our own Sun. Taking into account also that HD 189733b is a giant planet very close to its star, then it must suffer an X-ray dose 3 million times higher than the Earth. 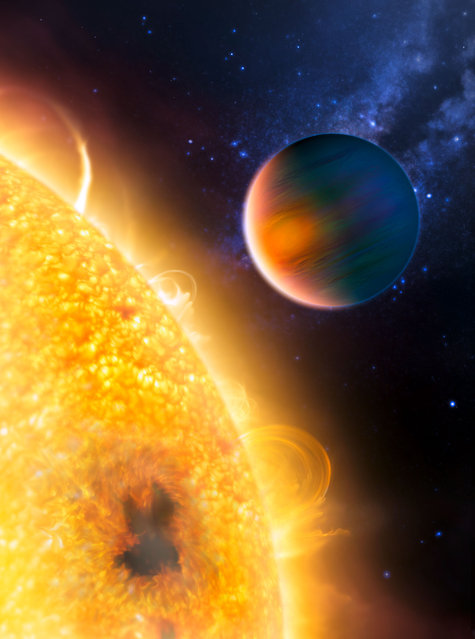 Evidence to support X-ray driven evaporation comes from simultaneous observations of HD 189733A with the Swift satellite, which, unlike Hubble, can observe the star's atmosphere-frying X-rays. A few hours before Hubble observed the planet for the second time, Swift recorded a powerful flash of radiation coming from the surface of the star, in which the star briefly became 4 times brighter in X-rays.

“X-ray emissions are a small part of the star's total output, but it is the part that it is energetic enough to drive the evaporation of the atmosphere”, explains Peter Wheatley (University of Warwick, UK), one of the co-authors of the study. “This was the brightest X-ray flare from HD 189733A of several observed to date, and it seems very likely that the impact of this flare on the planet drove the evaporation seen a few hours later with Hubble”.

X-rays are energetic enough to heat the gas in the upper atmosphere to tens of thousands of degrees, hot enough to escape the gravitational pull of the giant planet. A similar process occurs, albeit less dramatically, when a space weather event such as a solar flare hits the Earth's ionosphere, disrupting communications. While the team believes that the flash of X-rays is the most likely cause of the atmospheric changes they saw on HD 189733b, there are other possible explanations. For example, it may be that the baseline level of X-ray emission from the star increased between 2010 and 2011, in a seasonal process similar to the Sun's 11-year sunspot cycle. 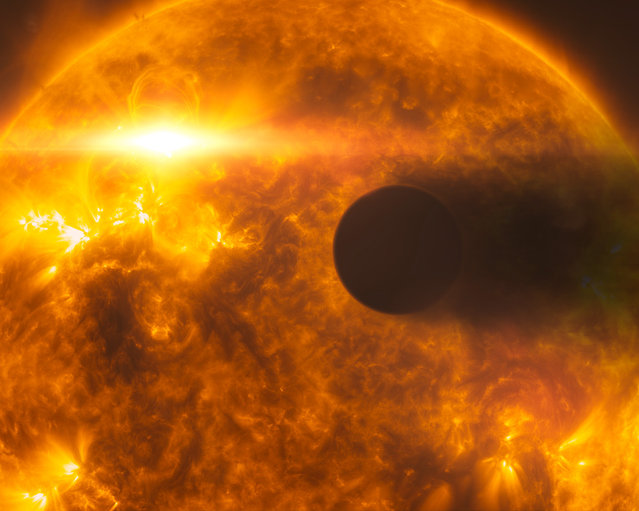 This research has relevance not only for the study of Jupiter-like planets. Several recent discoveries of rocky “super Earths” near their parent stars are thought to be the remnants of planets like HD 189733b, after the complete evaporation of their atmospheres. (Phys.org via ESA/Hubble Information Centre)
Edit Del
29 Jun 2012 09:45:00, post received 0 comments
Publication archive:
←   →
Popular tags:
All tags
Last searches: