Earth and Space Winner and Overall Winner: "Guiding Light to the Stars" by Mark Gee, Australia.

"The skies of the Southern Hemisphere offer a rich variety of astronomical highlights. The central regions of the Milky Way Galaxy, 26,000 light years away, appear as a tangle of dust and stars in the central part of the image. Two even more distant objects are visible as smudges of light in the upper left of the picture. These are the Magellanic Clouds, two small satellite galaxies in orbit around the Milky Way." "Structures like this often seem unchanging and timeless on the scale of a human lifetime. However, they are fleeting and transient on astronomical timescales. Over just a few thousand years the fierce radiation from the stars in this nebula will erode the surrounding clouds of dust and gas, radically altering its appearance." "First discovered by astronomer Caroline Herschel in 1783, NGC 253 is a rare example of a 'starburst galaxy' with new stars being formed at many times the rate in our own galaxy, the Milky Way. Its mottled appearance comes from extensive lanes of dust which thread through the galactic disk. These are studded with many red clouds of ionized hydrogen gas, marking the sites where new stars are being born." 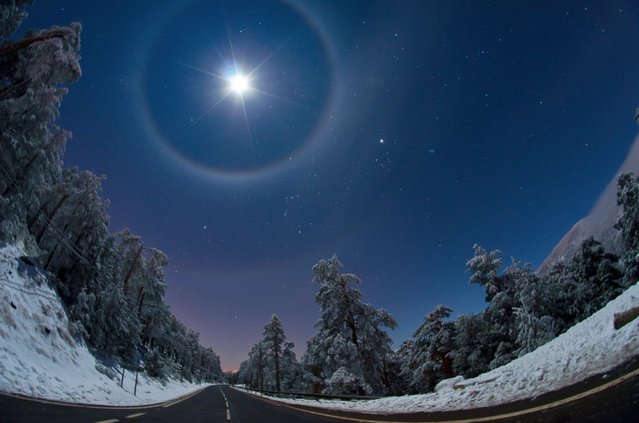 "All of the light which reaches the ground from space must first travel through the Earth's atmosphere. During its journey the light can be altered by all sorts of atmospheric phenomena. Tiny ice crystals high above the ground refract the moonlight diverting it into a number of beautiful halos." 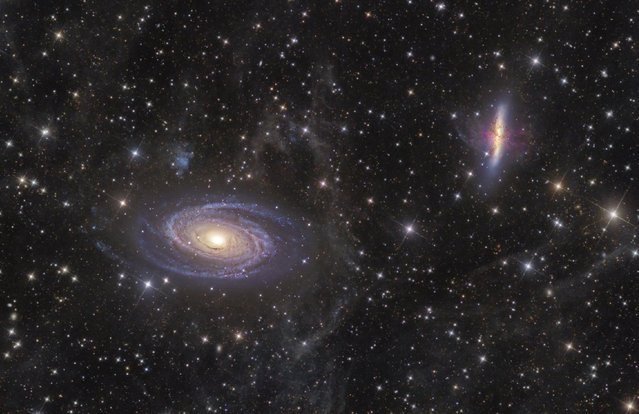 "Lying at a distance of twelve million light years from Earth, M81 and M82 are galaxies with a difference. Close encounters between the two objects have forced gas down into their central regions. In M81 this influx of gas is being devoured by a supermassive black hole. In neighboring M82 the gas is fueling a burst of new star formation which in turn is blasting clouds of hydrogen (shown in red) back out into space." 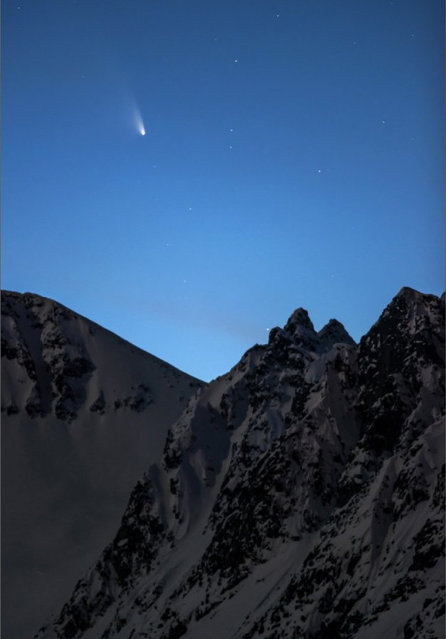 Earth and Space (Highly Commended): "Icy Visitor" by Fredrik Broms, Norway.
"Like the snowy mountains in the foreground, the nucleus of Comet Panstarrs is composed largely of ice and rock. The nucleus itself is just a few kilometres across but as it neared the Sun in early 2013, ice evaporating from the surface formed a tail of gas and dust hundreds of thousands of kilometres long." 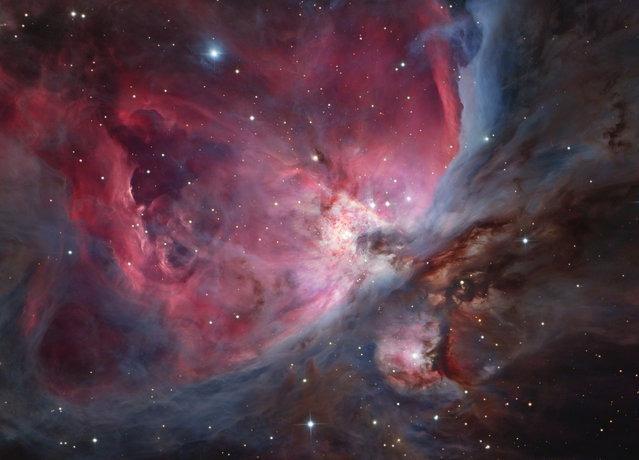 Robotic Scope Image of the Year: "The Trapezium Cluster and Surrounding Nebula" by László Francsics, Hungary.

"The great Orion Nebula is often described as a 'stellar nursery' because of the huge number of stars which are being created within its clouds of dust and glowing gas. As dense clumps of gas collapse under their own gravity any remaining debris settles into a dark disc surrounding each newly-formed star. One of these 'protoplanetary discs' can be seen silhouetted against the bright background of glowing gas in the central star cluster of this image. Within the disc, material will condense still further, as planets, moons, asteroids and comets begin to form around the star." Deep Space Runner-Up: "Rho Ophiuchi and Antares Nebulae" by Tom O’Donoghue, Ireland.
"The smoky appearance of the dust clouds in this image is fitting, since the grains of dust which make up the nebula are similar in size to particles of smoke here on Earth. The dust can reflect the light of nearby stars, as seen in the blue and yellow regions. It can also block and absorb the light of more distant stars, appearing brown and black in this image. To the right a bright star is ionizing a cloud of hydrogen gas, causing it to glow red, while below it far in the distance, is a globular cluster containing thousands of stars." "A great deal of careful planning, a long night of photography and hours of painstaking image processing have gone into creating this startling composite image of the Perseid meteor shower. The Perseid meteors get their name from the constellation of Perseus from where they appear to come. However, even at the peak of the shower it is impossible to predict exactly when or where the next meteor will appear. The photographer has combined 23 individual stills to convey the excitement and dynamism of this natural firework display." 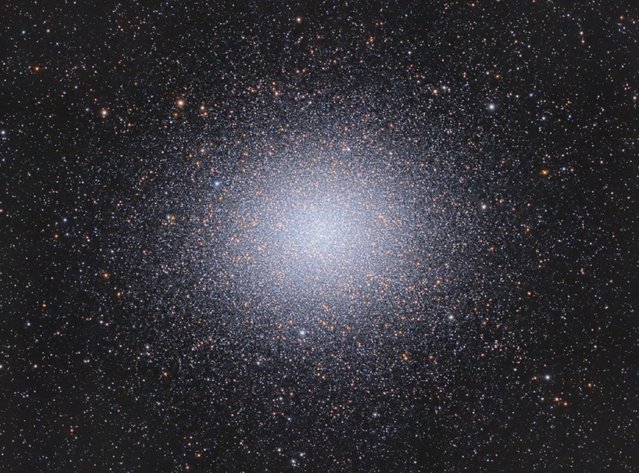 "Omega Centauri is a globular cluster, a spherical cloud containing several million stars. As this image shows, the stars are more densely clustered towards the centre. The pronounced red color of several of the stars gives away the cluster's great age: it is thought to have been formed billions of years ago. The cluster was first noted by the astronomer Ptolemy almost 2000 years ago and cataloged by Astronomer Royal Edmond Halley in 1677." "The shifting lights of the Aurora Borealis can take on many shapes and forms as they are molded by the Earth's complex magnetic field. Sheets and planes of glowing gas appear to be twisted into a giant vortex above Grøtfjord in Norway."
Edit Del
05 Oct 2013 12:23:00, post received 0 comments
Publication archive:
←   →
Popular tags:
All tags
Last searches: