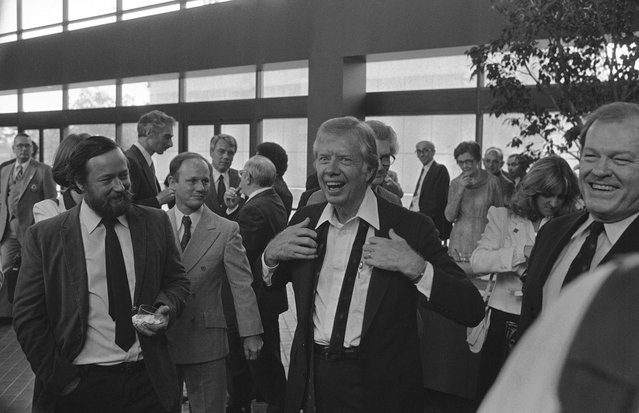 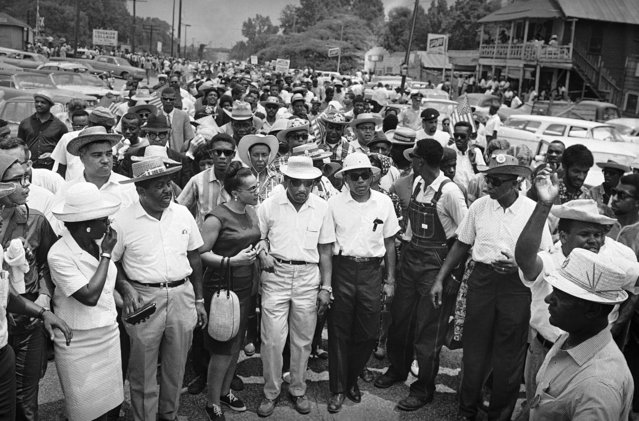 Thousands of civil rights marchers fall in behind their leaders as the last leg of the Mississippi March sets out from Tougaloo College for Jackson in Tougaloo, Mississippi on Sunday, June 26, 1966. In the front row left to right are: the Rev. Ralph Abernathy, Juanita Abernathy, Mrs. Coretta Scott King, Dr. Martin Luther King, James Meredith, Stokely Carmichael of the Student Non-Violent Coordinating Committee (looking back) and Floyd B. McKissick, national director of the Congress of Racial Equality. (Photo by Charles Kelly/AP Photo) 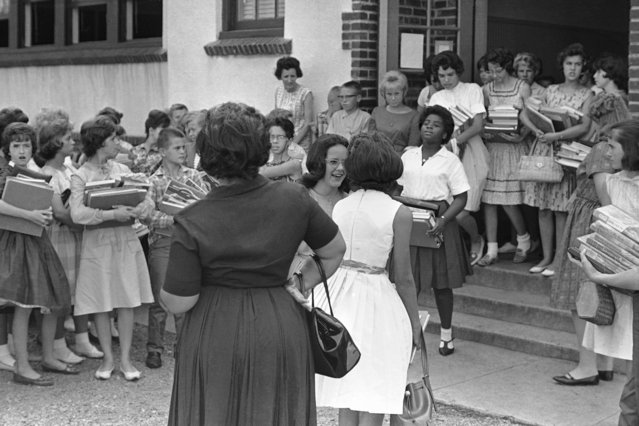 Chicago comedian Dick Gregory, wearing denim jacket and western attire, reads a Memphis newspaper as he waits in the administrator's office, June 7, 1966 at William F. Bowld Hospital in Memphis for word of James Meredith's condition. Gregory arrived in Memphis from Chicago with the announced purpose of taking up Meredith's Memphis-to-Jackson, Miss., march at the point, where Meredith was shot on Monday afternoon. (Photo by Charles Kelly/AP Photo) 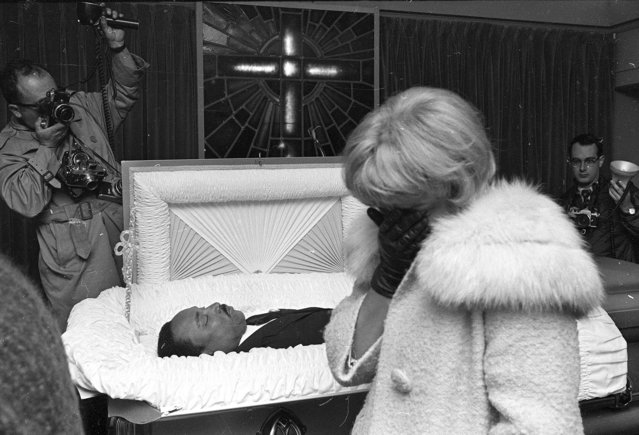 An unidentified woman weeps at the R.S. Lewis funeral home in Memphis, Tenn., as hundreds of mourners filed past the body of civil rights leader Dr. Martin Luther King, Jr., April 5, 1968, before it was to be sent to Atlanta for burial. (Photo by Charles Kelly/AP Photo) Retired baseball player Henry Aaron, right, rocks in laughter as he hears former boxer Muhammad Ali, left, describe the wonder to those in the presence of the “world’s greatest boxer and the greatest baseball player of all time” at an Atlanta press conference on December 1, 1976. Ali reaffirmed his retirement from boxing, promoted his biographical movie and the business venture of Leroy Johnson, center, Atlanta businessman who sponsored Ali’s 1970 comeback. (Photo by Charles Kelly/AP Photo) 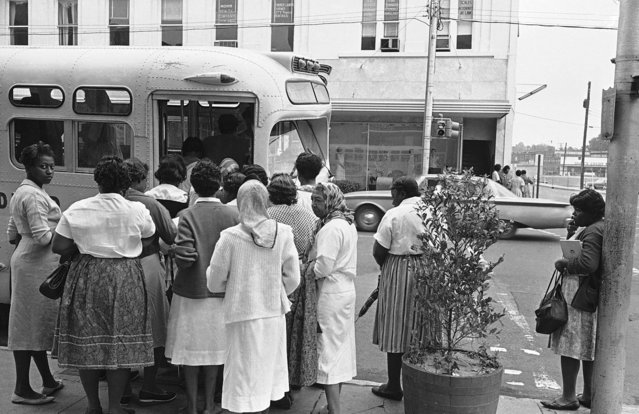 Blacks board buses at the corner of Capitol St. and Roach St., April 23, 1962 in Jackson, Miss. Despite boycott scheduled to begin by the Jackson Non-Violent Committee, there was no appreciable loss of traffic due to the boycott and there were no incidents. (Photo by Charles Kelly/AP Photo) 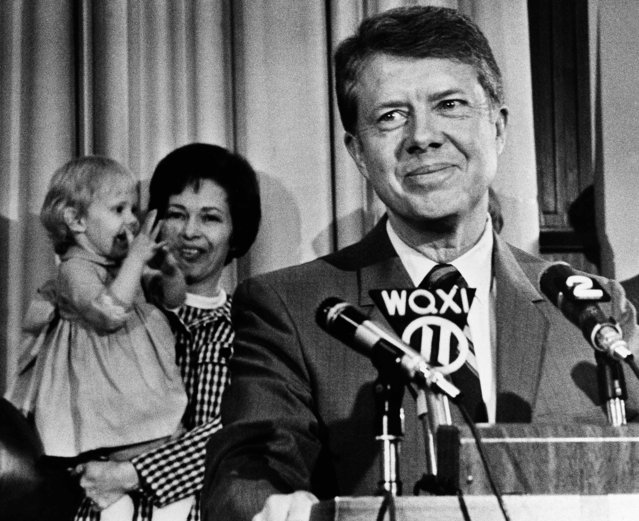 Former State Sen. Jimmy Carter listens to applause at the Capitol in Atlanta on April 3, 1970, after announcing his candidacy or governor. In background, his wife Rosalyn holds two-year-old daughter Amy who joined in the applause. Carter, 45, of Plains, Ga., finished third in the 1966 Democratic Primary behind Gov. Lester Maddox and Ellis Arnall. (Photo by Charles Kelly/AP Photo) Police haul a youth to the paddy wagon as an undetermined number of arrest were made in downtown Atlanta, Georgia, February 25, 1971, as police moved in to disperse black youths after windows were broken and rocks and fruit thrown in what officers called “a major disturbance”. (Photo by Charles Kelly/AP Photo) 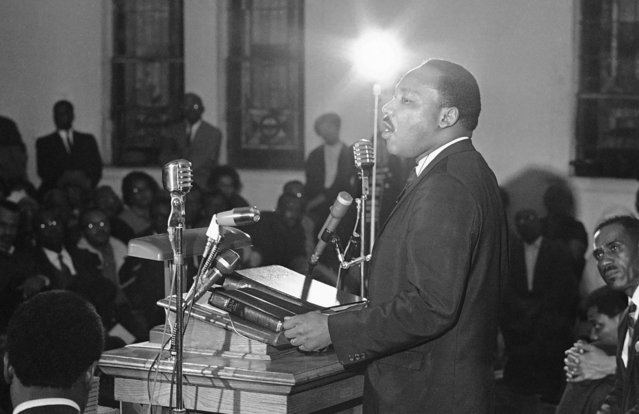 A relief squad of the Tennessee National Guard files across Beale Street in Memphis, Tenn., to replace troopers already stationed at strategic points in the racially tense city, March 30, 1968. The troops have been on duty in Memphis since violence erupted during a march led by Dr, Martin Luther King Jr. on March 28. (Photo by Charles Kelly/AP Photo) 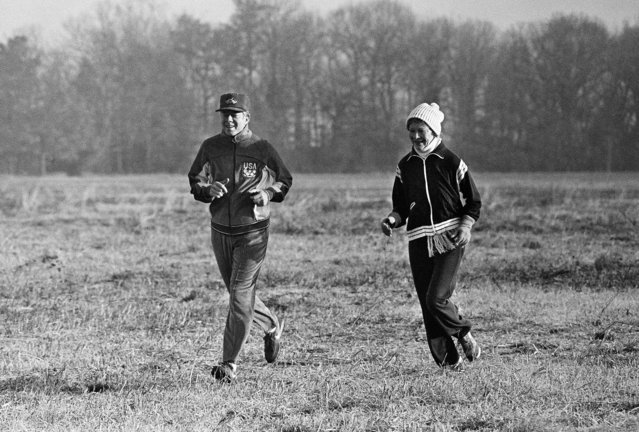