Fact A Look at Life in Bangladesh 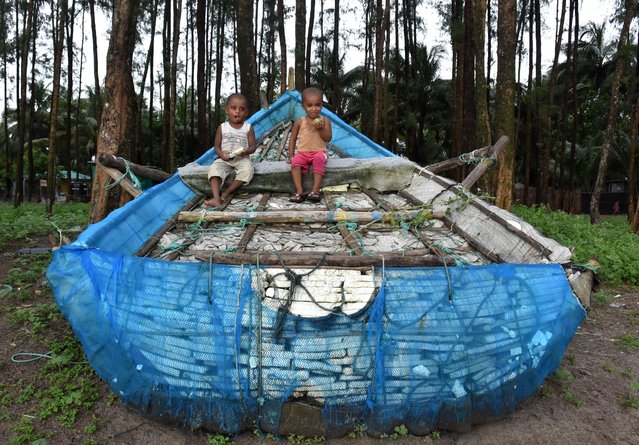 Children of fishers are seen at Shamlapur area of Cox's Bazar, Bangladesh on September 02, 2021. They make a living by fishing in the sea. They live by the sea. Despite the storm surges caused by the cyclones they stay here. Everyone from the youngest to the oldest in the family is engaged in fishing and selling. (Photo by Mohammad Shajahan/Anadolu Agency via Getty Images) 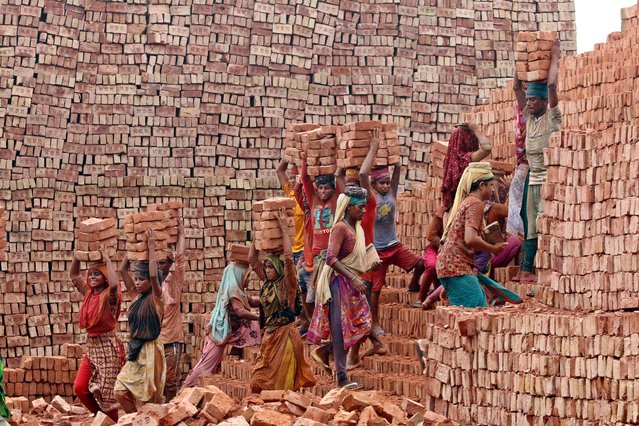 Bangladeshi migrants holds bricks blocks over his head to transport it on the other side of the river at a brick-field in Keraniganj on September 4, 2021. Around 400,000 low-income migrants arrive in Dhaka every year to work at brickfields, In the brick factory Millions of bricks are burned even though this affects the environment in Bangladesh. laborer pulling a cart loaded with bricks ready to be burnt at Keraniganj brick field. Brick field laborers work 7days a week and get BDT 350 (4.37 USD) per day. (Photo by Habibur Rahman/ZUMA Press Wire Service/Rex Features/Shutterstock) 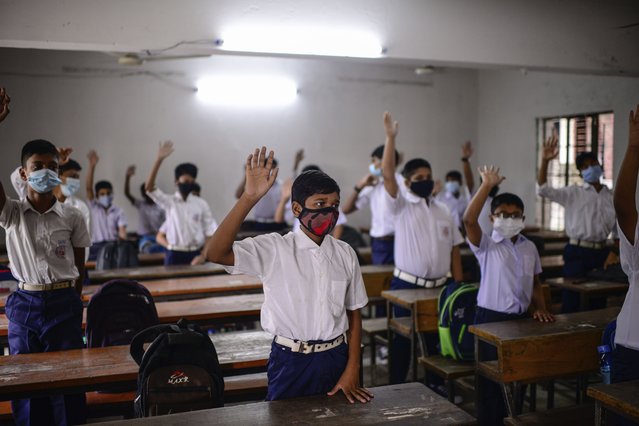 Students attend a class at the Narinda Government High School as schools reopen after being closed for nearly 18 months due to the coronavirus pandemic in Dhaka, Bangladesh, Sunday, September 12, 2021. (Photo by Mahmud Hossain Opu/AP Photo) 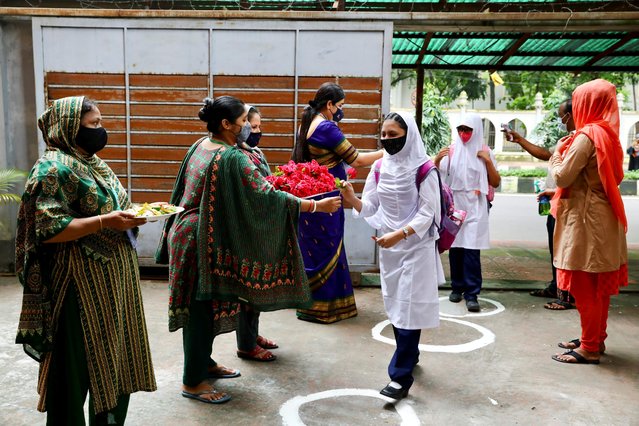 Teachers welcome students with roses at the Udayan Uchcha Madhyamik Bidyalaya as schools reopen after the government has withdrawn restrictions on educational institutions following a decrease in the number of cases of coronavirus disease (COVID-19) in Dhaka, Bangladesh, September 12, 2021. (Photo by Mohammad Ponir Hossain/Reuters) 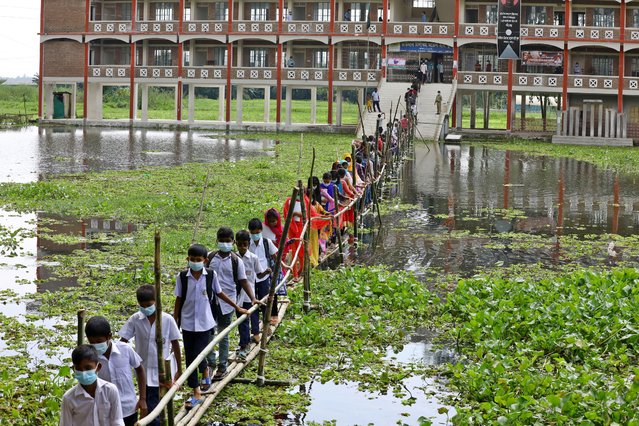 Students leave school via a bamboo bridge after the area was hit by floods in Gazipur, Bangladesh on September 12, 2021. (Photo by Harun-Or-Rashid/Eyepix Group/Rex Features/Shutterstock) 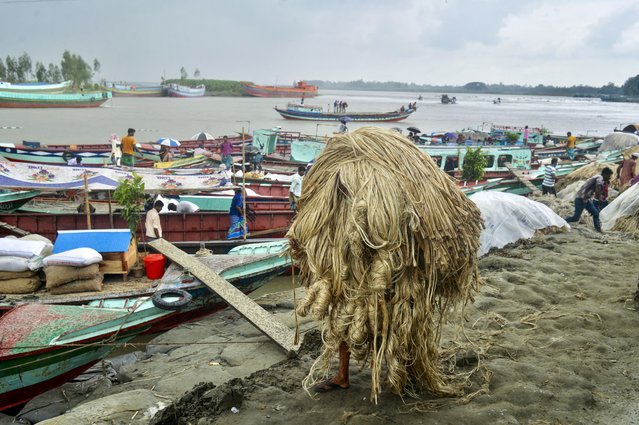 A worker carries jute to load on a boat at a rural market in Munshigonj on September 17, 2021. (Photo by Munir Uz Zaman/AFP Photo) 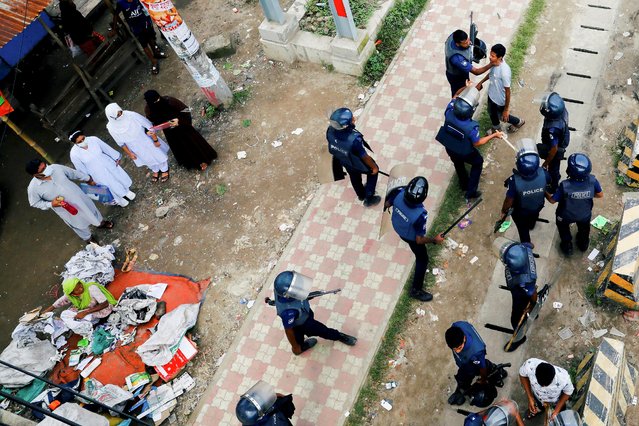 A riot police officer catches a man by the throat as the Sinha Denim Limited garment factory workers protest to demand their due salaries for the last three months in Kanchpur, on the outskirts of Dhaka, Bangladesh, September 23, 2021. (Photo by Mohammad Ponir Hossain/Reuters) 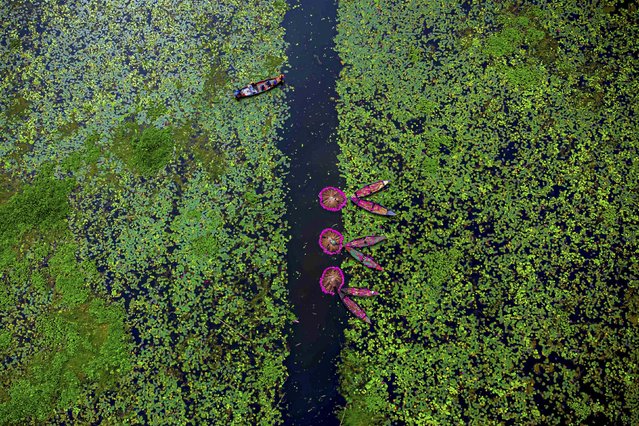 Workers in Satla village, in southern Bangladesh, harvest vibrant purple water lilies, arranging them in circles on the surface of the dark water on September 24, 2021. The flowers are sold at markets to be cooked and eaten as a local delicacy. (Photo by Saleh Mohammed Asif/Solent News) 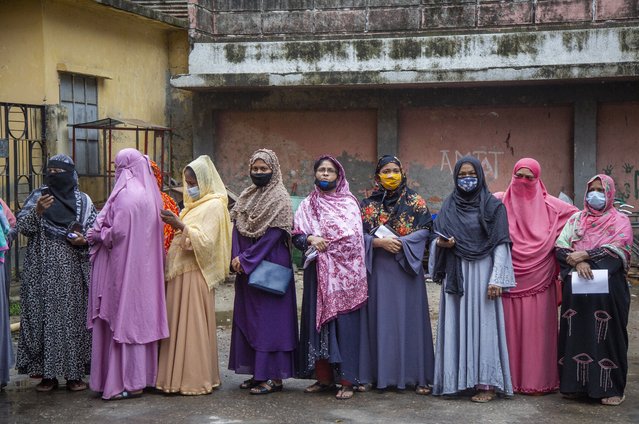 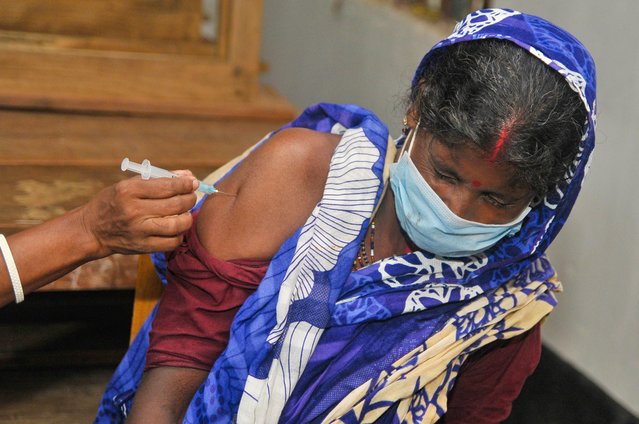 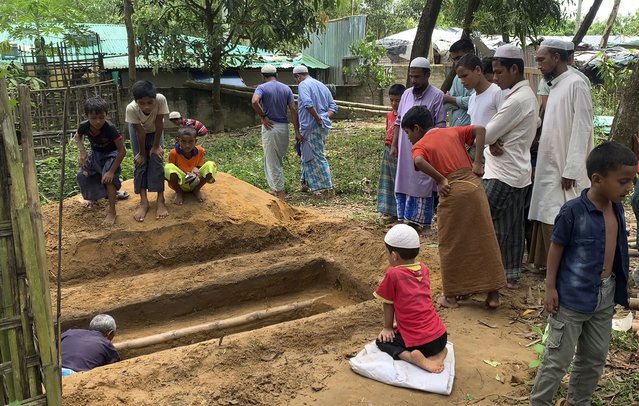 A grave is being prepared to bury Mohibullah, an international representative of ethnic Rohingya refugees, at the Rohingya refugee camp in Kutupalong, Bangladesh, Thursday, September 30, 2021. Mohibullah, who was in his 40s, was a teacher who emerged as a key refugee leader and a spokesman representing the Muslim ethnic group in international meetings, was shot to death in a camp in Bangladesh by unknown gunmen late Wednesday, police said. (Photo by Shafiqur Rahman/AP Photo) 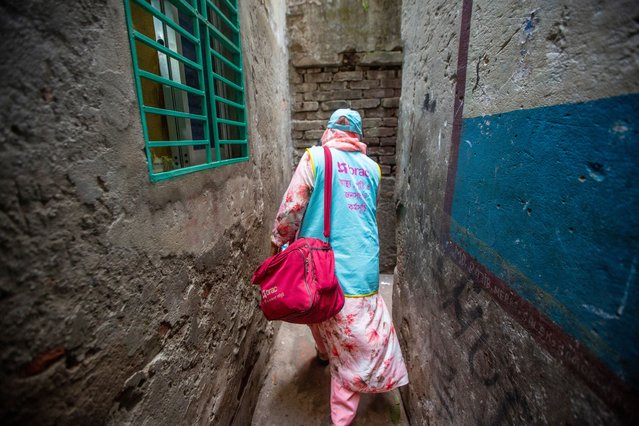 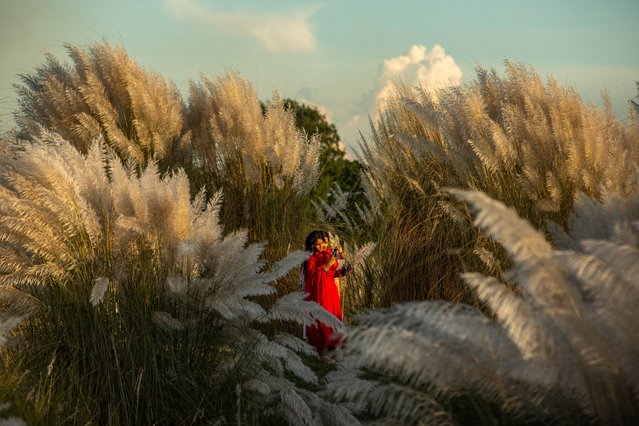 People visit a catkin field in Sarighat on the outskirts of Dhaka, Bangladesh on September 30, 2021. (Photo by Ahmed Salahuddin/NurPhoto via Getty Images) 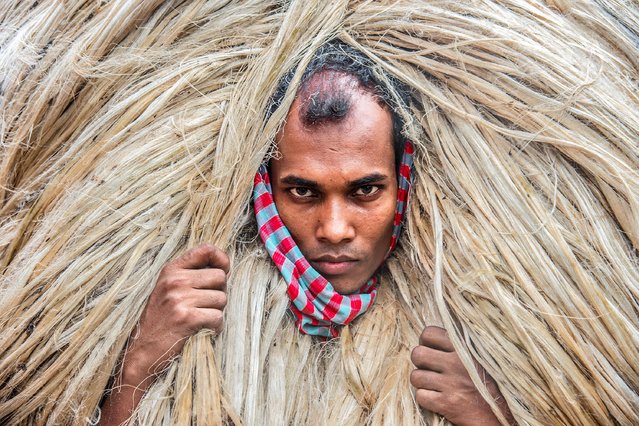 Portrait of a worker carring a 50 Kg of jute package on his head, making it look like they are wearing big wigs, at a wholesale market in central Bangladesh's Manikganj district some 63 km northwest of capital Dhaka on October 3, 2021. Jute is still considered the “golden fiber” in Bangladesh. (Photo by Mustasinur Rahman Alvi/Eyepix Group/Rex Features/Shutterstock) 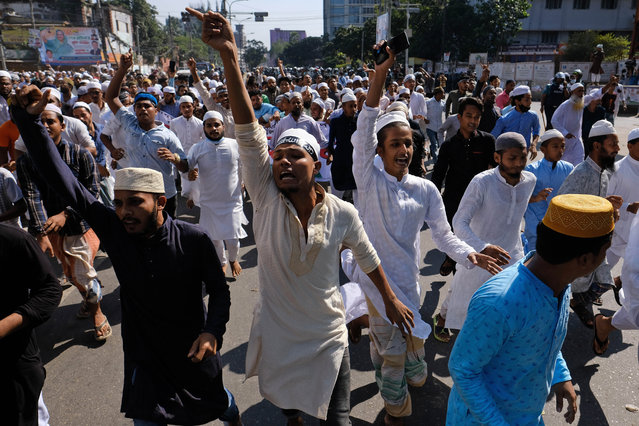 Muslim devotees shout slogans during a protest over an alleged insult to Islam, after Friday prayers outside the country’s main Baitul Mukarram Mosque in Dhaka, Bangladesh, Friday, October 15, 2021. Friday’s chaos in Dhaka followed reported incidents of vandalism of Hindu temples in parts of the Muslim-majority Bangladesh after photographs of a copy of the Holy book Quran at the feet of of a Hindu Goddess went viral on social media in a temple at Cumilla district in eastern Bangladesh. (Photo by Mahmud Hossain Opu/AP Photo) 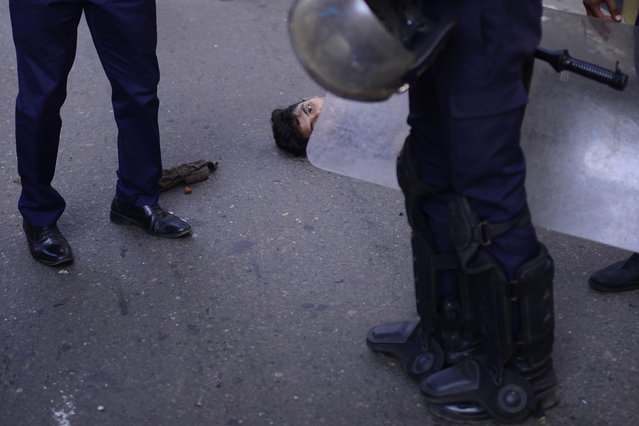 A protestor lies ob the ground after a clash with polce during a protest over an alleged insult to Islam, outside the country’ main Baitul Mukarram Mosque in Dhaka, Bangladesh, Friday, October 15, 2021. (Photo by Mahmud Hossain Opu/AP Photo) 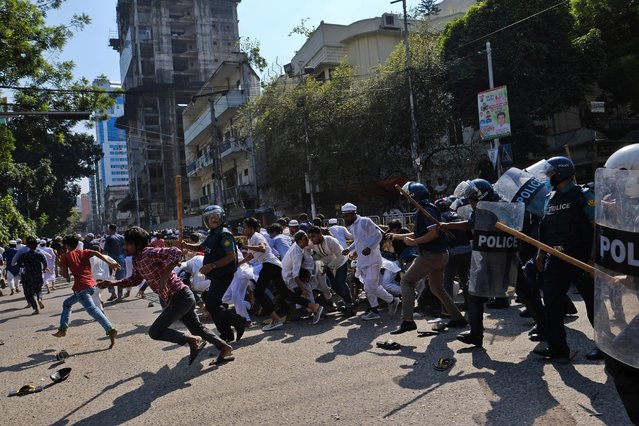 Police clash with Muslim devotees during a protest over an alleged insult to Islam, outside the country’ main Baitul Mukarram Mosque in Dhaka, Bangladesh, Friday, October 15, 2021. (Photo by Mahmud Hossain Opu/AP Photo) 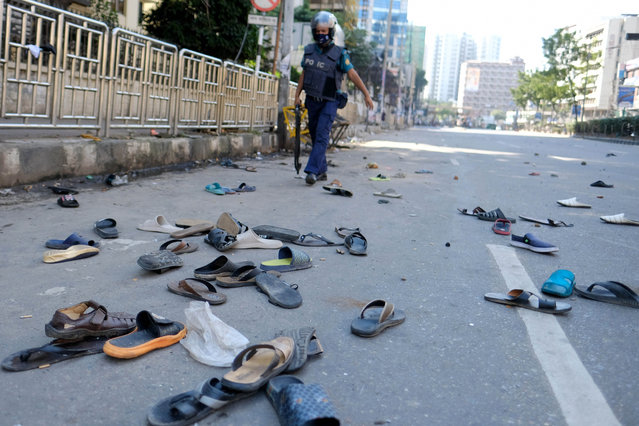 Footwear of protestors lie strewn on a road after clashes with police during a protest over an alleged insult to Islam, outside the country’s main Baitul Mukarram Mosque in Dhaka, Bangladesh, Friday, October 15, 2021. (Photo by Mahmud Hossain Opu/AP Photo) 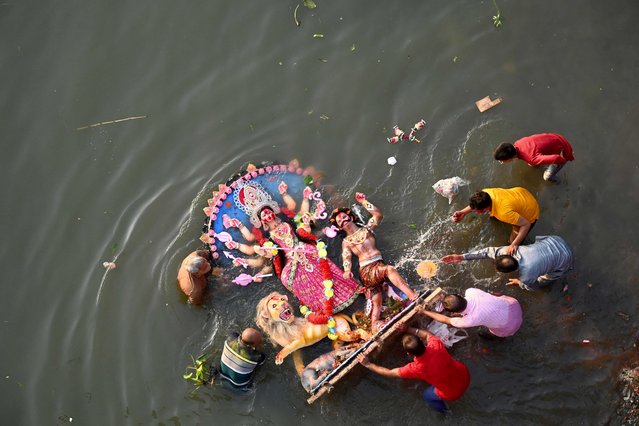 Hindu devotees immerse a clay idol of the Hindu Goddess Durga in the Buriganga River on the final day of the Durga Puja festival in Dhaka on October 15, 2021. (Photo by Munir Uz Zaman/AFP Photo) 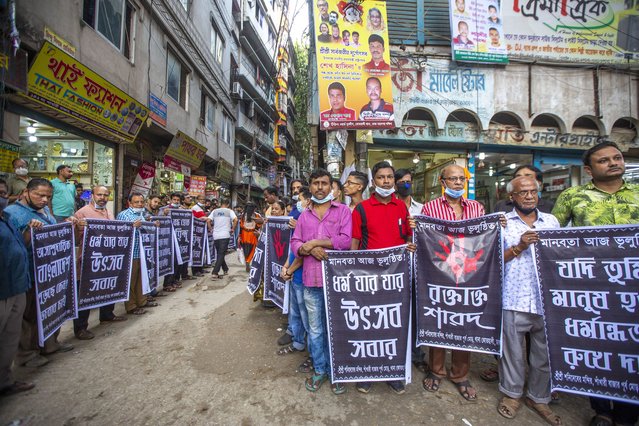