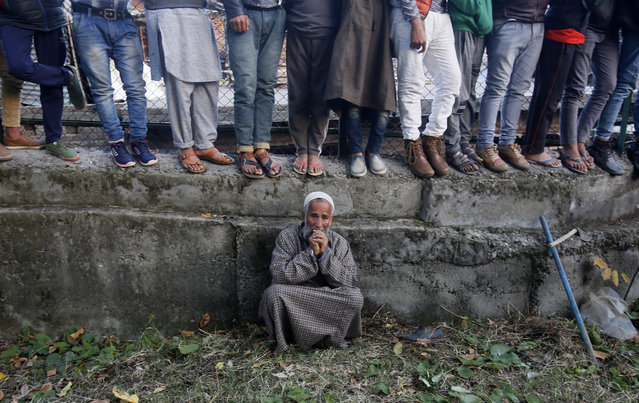 An elderly Kashmiri villager cries during the funeral of Uzair Mushtaq in Kulgam 75 Kilometers south of Srinagar, Indian controlled Kashmir, Sunday, October 21, 2018. Three local rebels were killed in a gunbattle with Indian government forces in disputed Kashmir on Sunday, and six civilians were killed in an explosion at the site after the fighting was over, officials and residents said. (Photo by Mukhtar Khan/AP Photo) 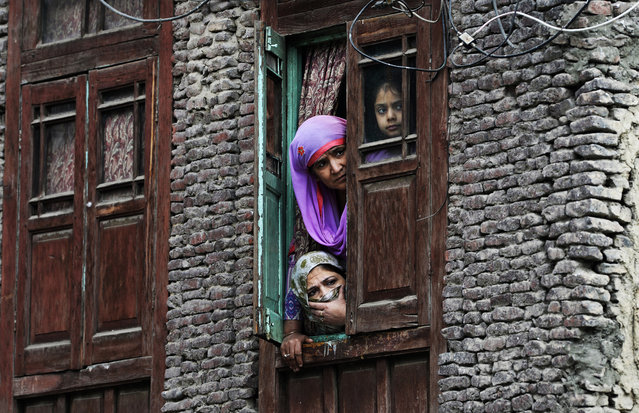 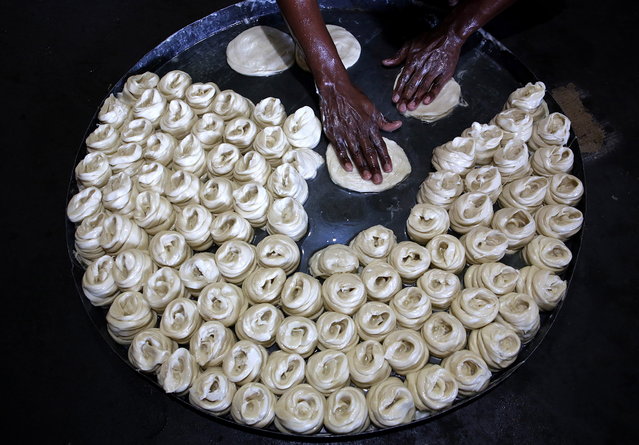 An Indian worker prepares material used for the making of vermicelli for the upcoming Hindu festival Karva Chauth in Tarore village, about 30km from Jammu, the winter capital of Kashmir, India, 24 October 2018. Karva Chauth is observed by married Hindu women who eat the traditionally prepared food vermicelli in the wee hours of the morning and fast until dusk praying for wedded bliss and a long life for their husbands. (Photo by Jaipal Singh/EPA/EFE) 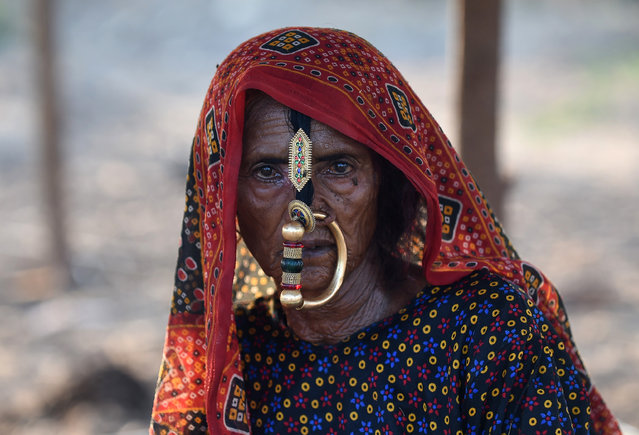 This picture taken on October 22, 2018 shows an Indian member of a nomadic shephard community from the remote Kutch region of India's western Gujarat state looking on with a traditional nose ring ornament at a camp where the group has relocated in search of sustenance for their livestock, in Mehsana district some 100km from Ahmedabad. - Due to drought conditions in their traditional agriculture lands in the Kutch region in western Gujarat state, around 40 Indian members of a nomadic shephard group have walked hundreds of kilometres to Mehsana district in the last six weeks in search of adequate food and water for their buffalo and other livestock. (Photo by Sam Panthaky/AFP Photo) 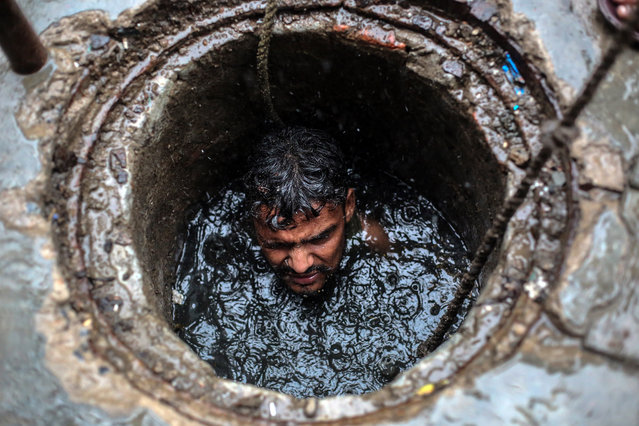 Joney, a 26 year-old sewer worker cleans a sewer line in Ghaziabad, Uttar Pradesh, India, 26 July 2018. Joney along with other sewer workers cleans the sewer lines by going inside the pits in Ghaziabad area without any safety masks or any safety equipment except for a safety belt to lift them up. Recent official government statistics showed one manual scavengers has died every five days since the beginning of 2017 while cleaning sewers. This is one of the most dangerous jobs in India and its usually done by the Valmiki community, a sub-caste that is considered one of the lowest of the so-called “untouchable” or Dalit caste. Members of these communities have traditionally occupied cleaning and sanitation work in Indian society. (Photo by Rajat Gupta/EPA/EFE) 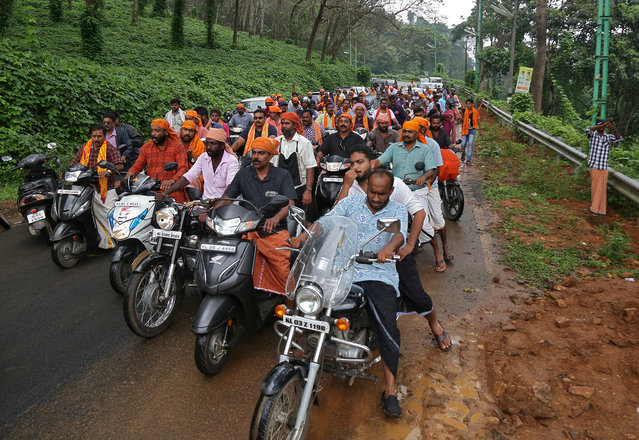 Hindu devotees take part in a motorcycle rally as part of a protest against the lifting of a ban by Supreme Court at Nilakkal Base camp in Pathanamthitta district in the southern state of Kerala, October 16, 2018. (Photo by Sivaram V/Reuters) 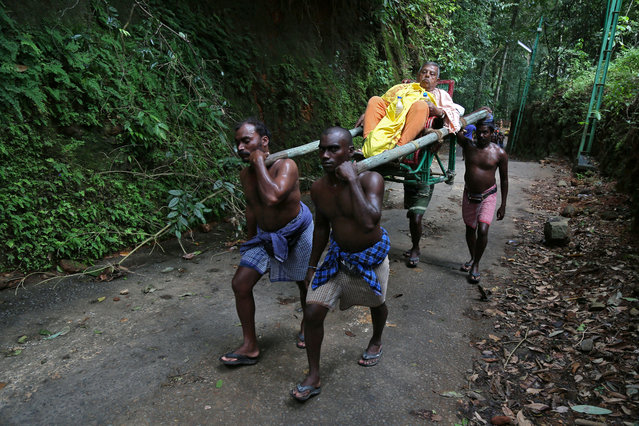 A Hindu devotee is carried on a palanquin to the Sabarimala temple in Pathanamthitta district in the southern state of Kerala, October 17, 2018. (Photo by Sivaram V/Reuters) 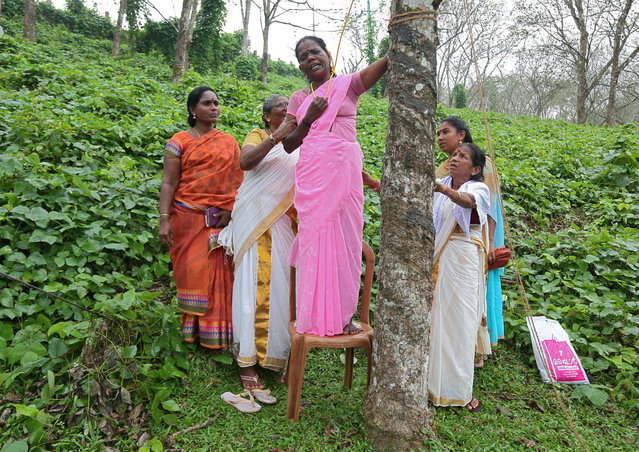 Ratnaamma, 51, a Hindu devotee, is surrounded by other devotees as she threatens to commit suicide in protest against the lifting of ban by Supreme Court at Nilakkal Base camp in Pathanamthitta district in the southern state of Kerala, October 16, 2018. (Photo by Sivaram V/Reuters) 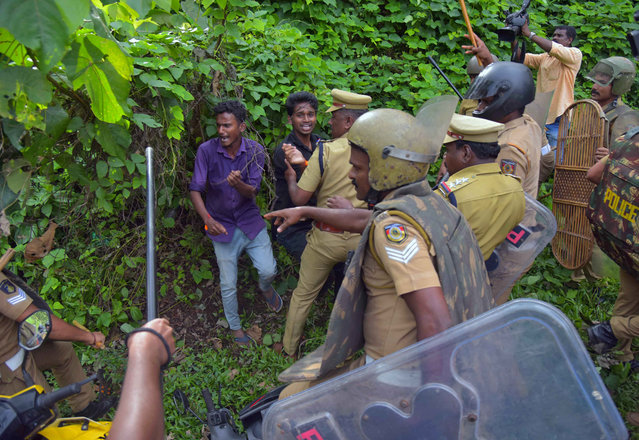 Police wield their batons against demonstrators during a protest against the lifting of a ban by Supreme Court that allowed entry of women of menstruating age to the Sabarimala temple, at the Nilakkal Base Camp in Pathanamthitta district in the southern state of Kerala, October 17, 2018. (Photo by Reuters/Stringer) 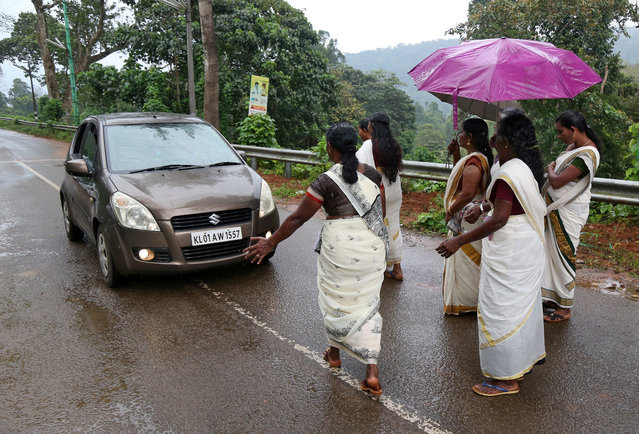 Hindu devotees stop a car to check if any women of menstruating age are headed towards the Sabarimala temple, at Nilakkal Base camp in Pathanamthitta district in the southern state of Kerala, October 16, 2018. (Photo by Sivaram V/Reuters) 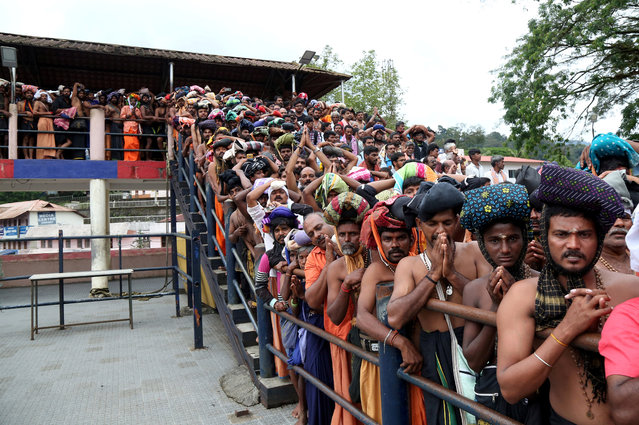 Hindu devotees wait in queues inside the premises of the Sabarimala temple in Pathanamthitta district in the southern state of Kerala, October 17, 2018. (Photo by Sivaram V/Reuters) 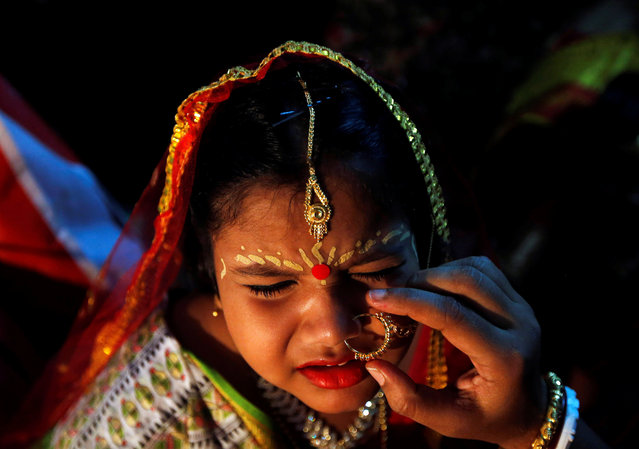 A young girl dressed as a Kumari reacts as a woman puts a nose ring on her, before she is worshipped by Hindu devotees as a part of a ritual during the Durga Puja festival celebrations in Kolkata, India, October 17, 2018. (Photo by Rupak De Chowdhuri/Reuters) 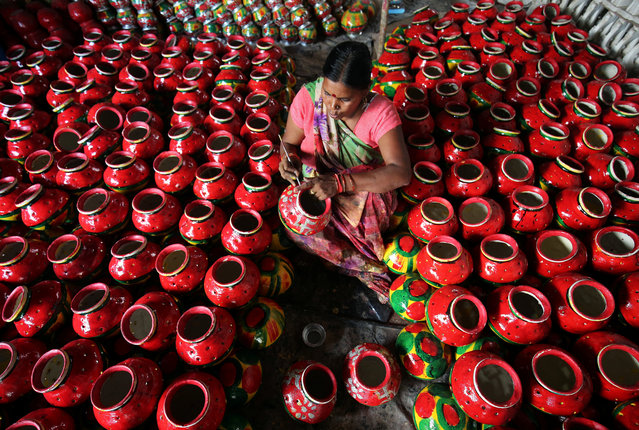 A woman decorates an earthen pitcher typically used during Garba, a folk dance, inside a workshop ahead of Navratri, a festival during which devotees worship the Hindu goddess Durga and youths dance in traditional costumes, in Ahmedabad, India October 3, 2018. (Photo by Amit Dave/Reuters) 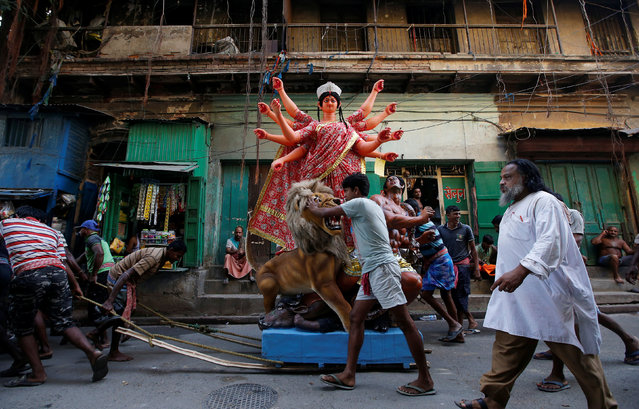 Labourers pull an idol of Durga, the Hindu goddess of power, through a street to be transported on a boat to a pandal, or a temporary platform, for the upcoming festival of Durga Puja in Kolkata, India, October 7, 2018. (Photo by Rupak De Chowdhuri/Reuters) 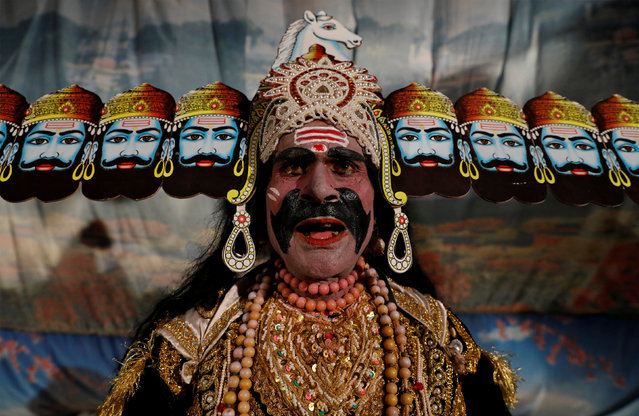 An artist dressed as demon king Ravana waits backstage before performing Ramlila, a re-enactment of the life of Hindu Lord Rama, during Vijaya Dashmi or Dussehra festival celebrations in Mumbai, India, October 16, 2018. (Photo by Danish Siddiqui/Reuters) 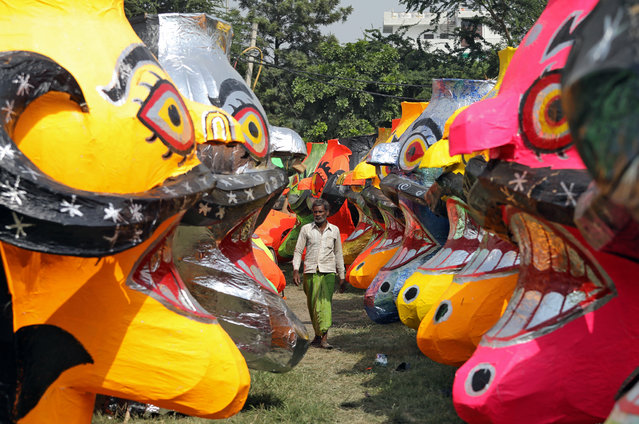 A man walks in between effigies of the demon king Ravana kept on display for sale for the upcoming Hindu festival of Dussehra, in New Delhi, India, October 15, 2018. (Photo by Anushree Fadnavis/Reuters) 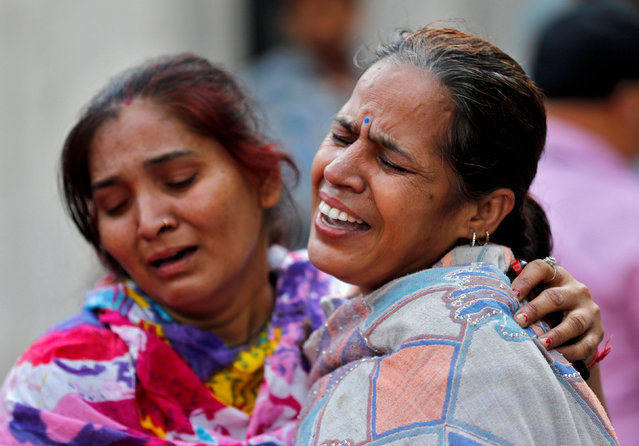 Women mourn the death of a relative after a commuter train traveling at high speed ran through a crowd of people on the rail tracks on Friday, outside a hospital in Amritsar, India, October 20, 2018. (Photo by Adnan Abidi/Reuters) 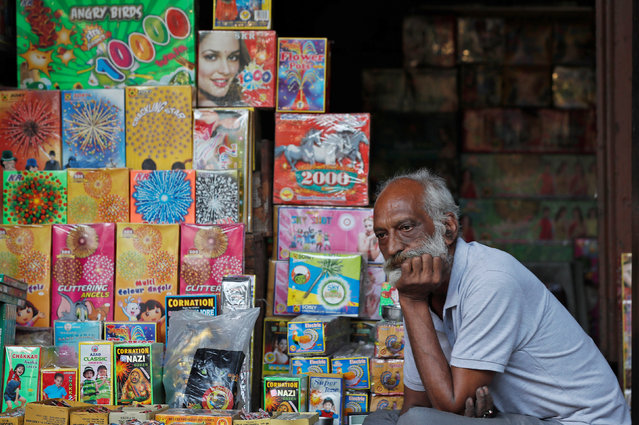 A shopkeeper waits for customers at his firecracker shop in the old quarters of Delhi, India, October 17, 2018. (Photo by Adnan Abidi/Reuters) 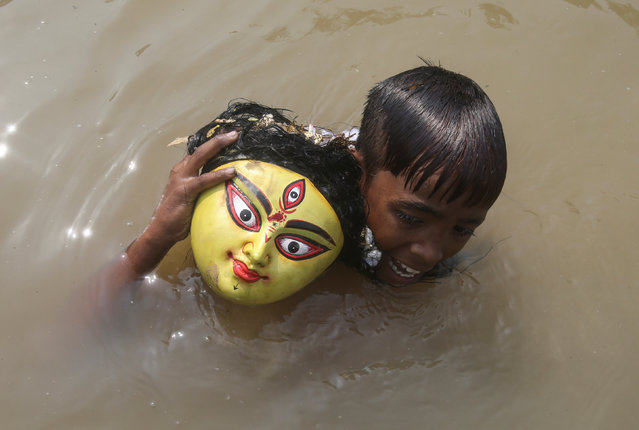 A boy carries the head of an idol of Hindu goddess Durga after its immersion into the waters of the river Howrah on the last day of the Durga Puja festival in Agartala, India, October 19, 2018. (Photo by Jayanta Dey/Reuters) 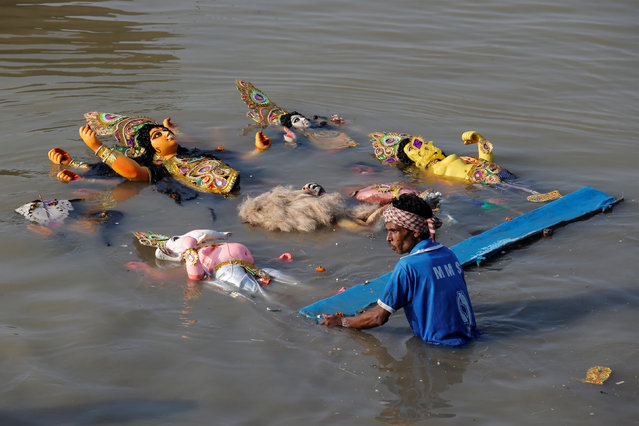 A devotee immerses an idol of the Hindu goddess Durga into the Ganges river on the last day of the Durga Puja festival in Kolkata, India October 19, 2018. (Photo by Rupak De Chowdhuri/Reuters) 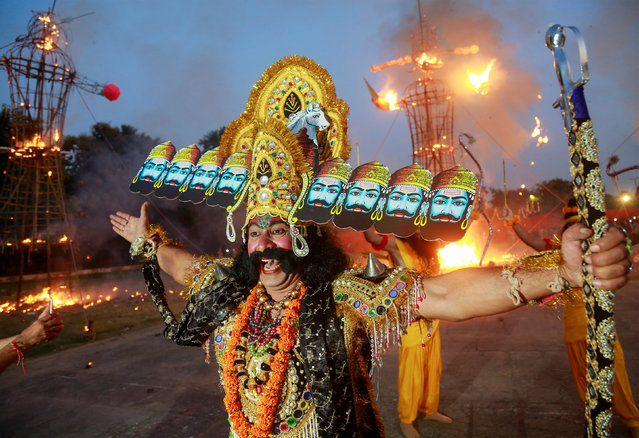