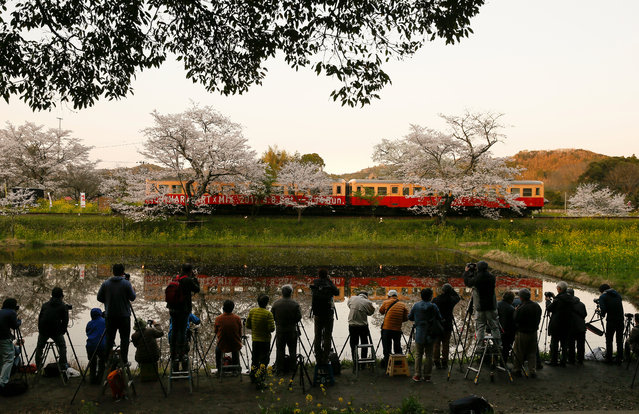 Amateur photographers try to capture nice images of two-car local train and full-bloomed cherry blossoms reflected on the water flowing to rice field in Ichihara, east of Tokyo, Japan, 13 April 2017. The rice planting will start at beginning of May at this area. (Photo by Kimimasa Mayama/EPA) 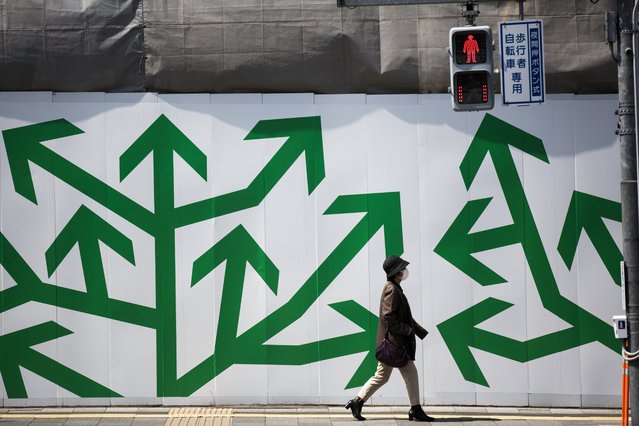 A pedestrian walks past decorated panelling used to shroud a construction site along a street in Tokyo on April 5, 2017. (Photo by Behrouz Mehri/AFP Photo) 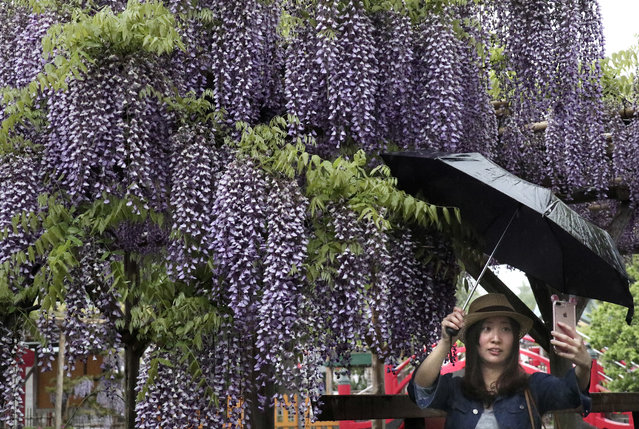 A visitor takes a selfie in front of blooming wisterias at Kameido-tenjin shrine during the annual wisteria festival in Tokyo, Monday, May 1, 2017. The festival runs until May 7. (Photo by Shizuo Kambayashi/AP Photo) 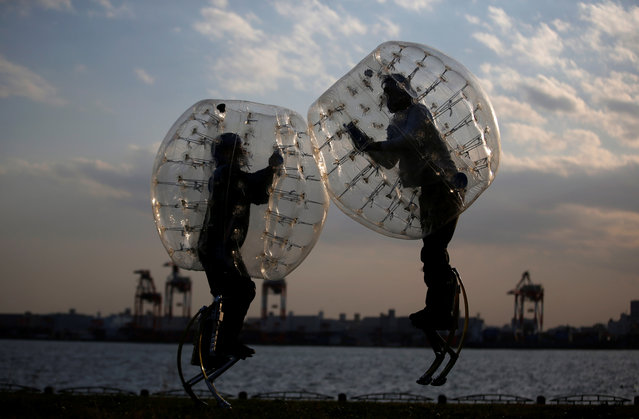 Ryoichi Ando (R), 27, a virtual-reality researcher and an inventor of “Bubble Jumper”, competes with his opponent as they demonstrate the sport in Tokyo, Japan, April 13, 2017. Ando said he felt as if he were wearing the kind of augmented body suit found in science-fiction movies that boosts the wearer's strength. In “Bubble Jumper”, players walking on stilts and wearing inflatable bubble protectors crash into each other like sumo wrestlers. (Photo by Kim Kyung-Hoon/Reuters) 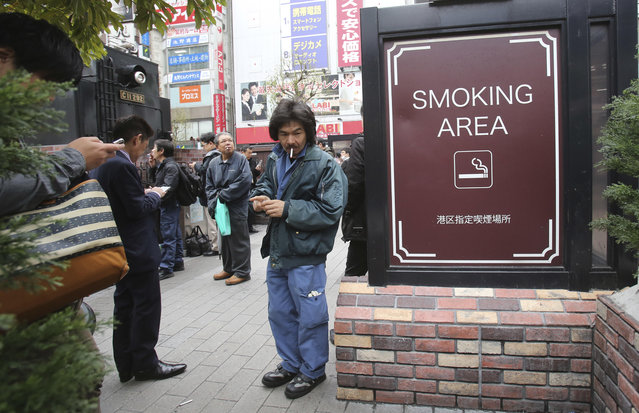 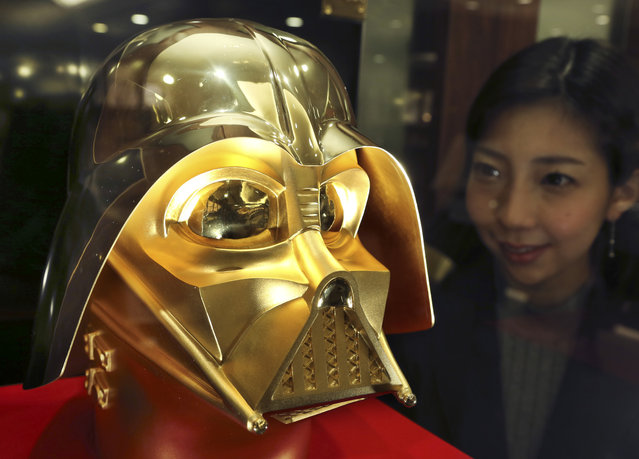 Tokyo gold jeweler Ginza Tanaka employee Momoko Marutani looks at the gold mask of Darth Vader at the jewelry shop in Tokyo, Monday, May 1, 2017. The life-size mask of Star Wars villain Darth Vader will be up for sale for a hefty price of 154 million yen ($1.38 million). The 24-karat mask was created by the gold jeweler to mark the 40th anniversary since the release of the first Star Wars film. (Photo by Koji Sasahara/AP Photo) 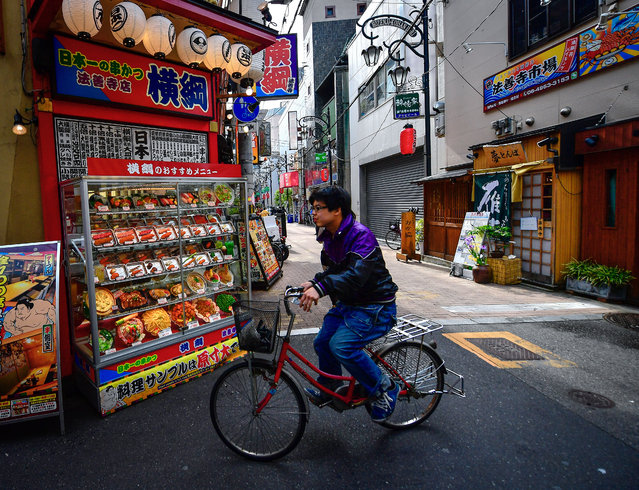 A local resident cycles past stalls in Namba district. Osaka, Japan on May 15, 2017. (Photo by Yuri Smityuk/TASS) 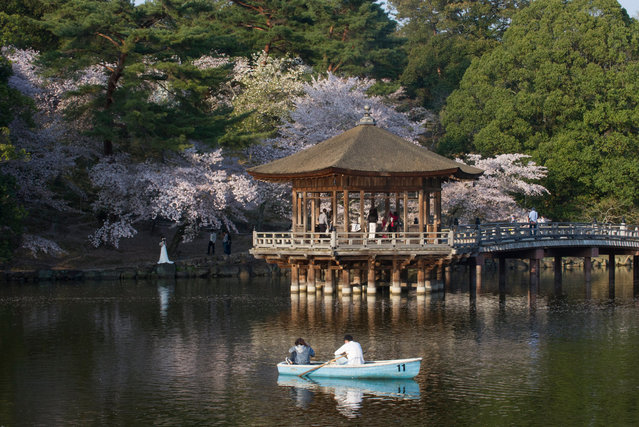 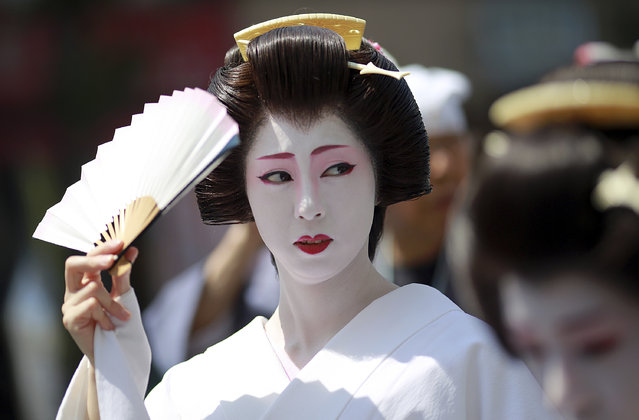 Geisha women parade down the street to Asakusa Shrine in the compound of Sensoji Temple Friday, May 19, 2017, in Tokyo prior to the annual Sanja Festival, one of the three major festivals in Tokyo. (Photo by Eugene Hoshiko/AP Photo) 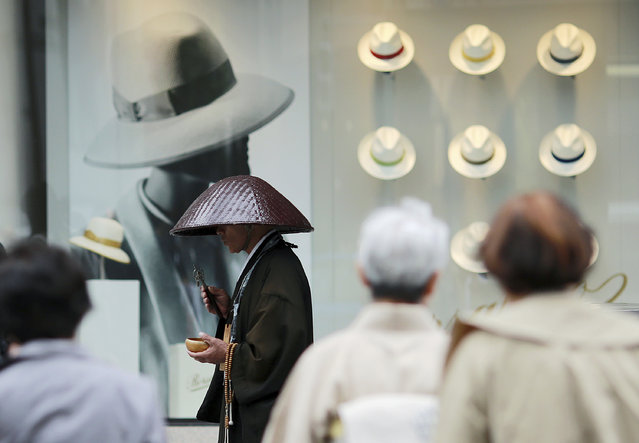 A Buddhist monk offers prayers in front of a window display of hats at a department store in the Ginza shopping district in Tokyo Tuesday, May 16, 2017. (Photo by Eugene Hoshiko/AP Photo) 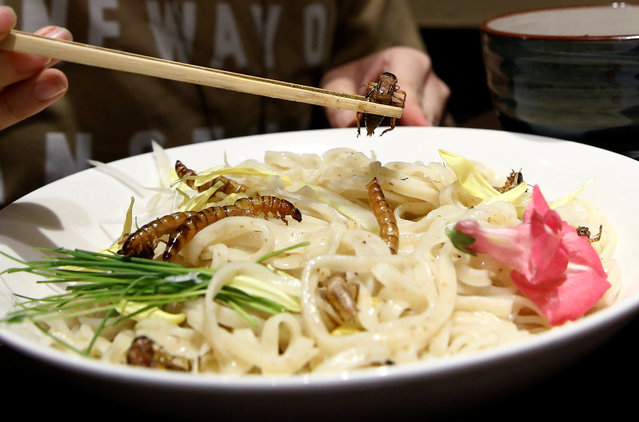 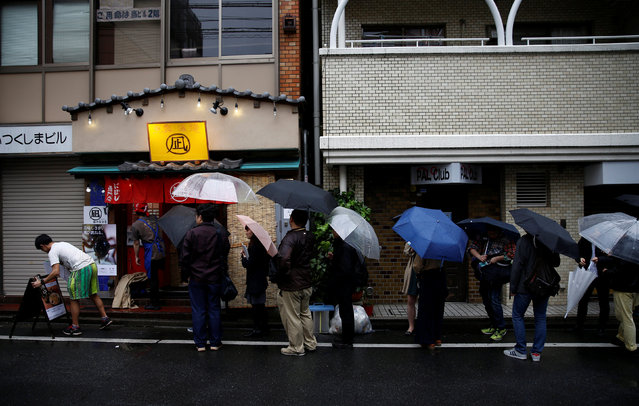 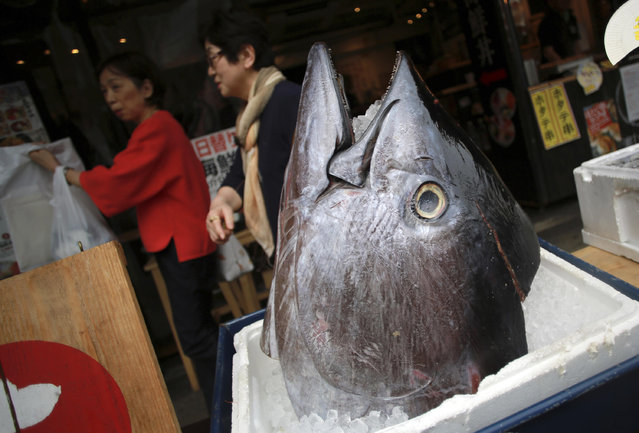 Customers walk past the head of a bluefin tuna in front of a seafood restaurant at Tsukiji fish market in Tokyo Tuesday, May 16, 2017. Criminal and civil cases allege executives at the largest canned tuna companies were agreeing to collectively raise prices and limit promotions. Major retailers are taking aim at the most popular tuna brands in the U.S. – Chicken of the Sea, Bumble Bee and StarKist – saying they conspired to keep prices high for consumers. (Photo by Eugene Hoshiko/AP Photo) 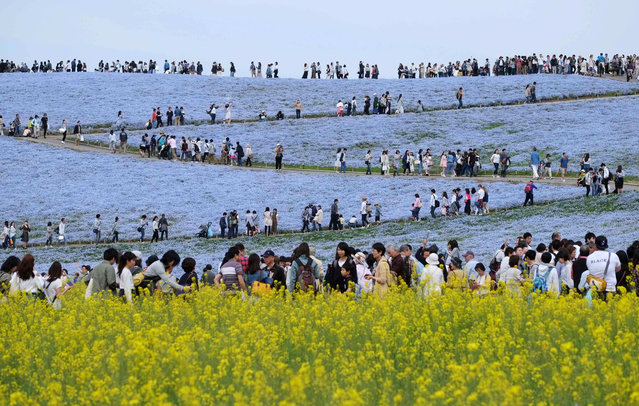 People walk on a hill covered with nemophila flowers in full bloom at Hitachi Seaside Park in Hitachinaka, Ibaraki Prefecture on May 3, 2017. Visitors to the park can witness an estimated 4.5 million nemophila in bloom until the end of May. (Photo by Kazuhiro Nogi/AFP Photo) 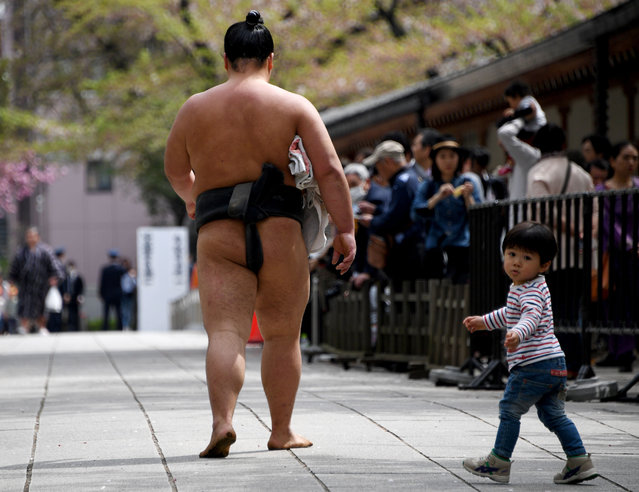 A young boy follows a sumo wrestler as he walks past spectators in a compound of Yasukuni Shrine in Tokyo on April 17, 2017. Sumo's top wrestlers took part in an annual one-day exhibition for thousands of spectators within the shrine's precincts. (Photo by Toshifumi Kitamura/AFP Photo) 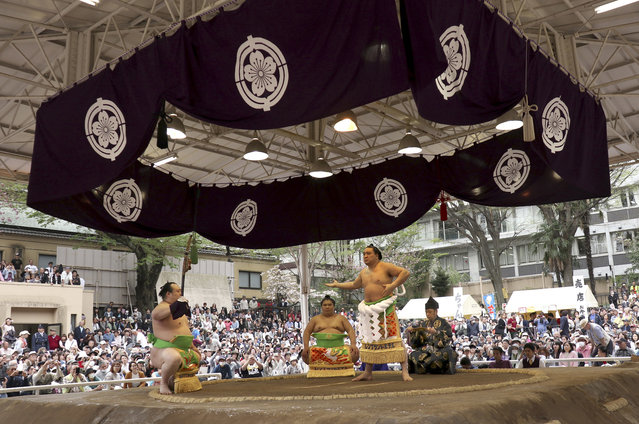 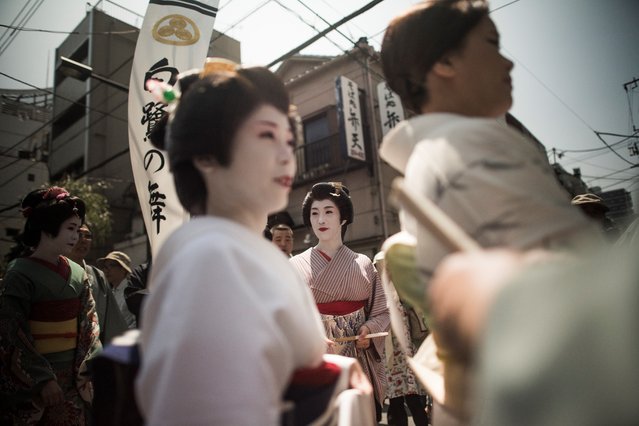 In this picture taken on May 19, 2017, geishas parade during the Sanja Matsuri festival in Tokyo. Over 1.5 million people flocked to Tokyo's Asakusa district during the three-day annual festival, which heralds the coming of summer in the Japanese capital. (Photo by Fred Dufour/AFP Photo) 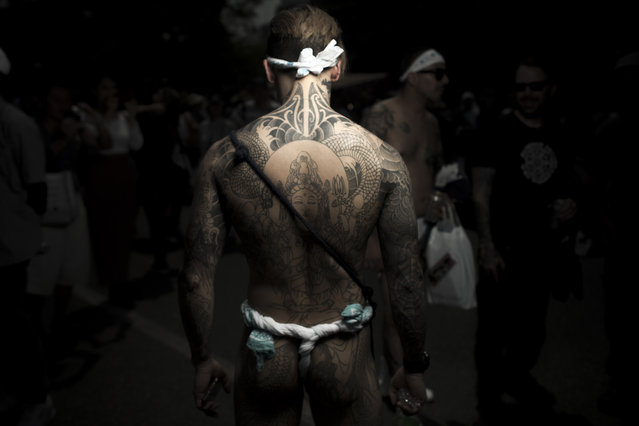 In this picture taken on May 20, 2017, a man poses for photographs showing his “Irezumi” Japanese traditional tattoos related to the Yakuza's universe, during the Sanja Matsuri festival in Tokyo. (Photo by Fred Dufour/AFP Photo) 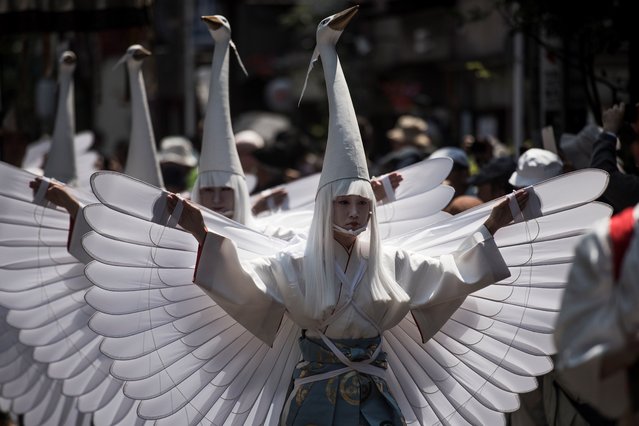 In this picture taken on May 19, 2017, heron-hooded dancers parade during the Sanja Matsuri festival in Tokyo. (Photo by Fred Dufour/AFP Photo) 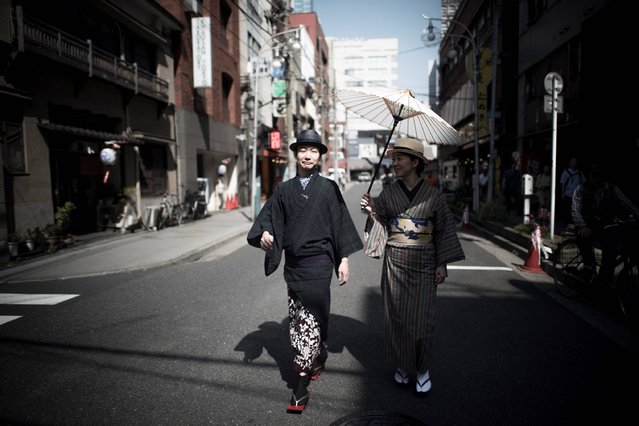 In this picture taken on May 21, 2017, a couple dressed in traditional Japanese costume walk along a street during the Sanja Matsuri festival in Tokyo. (Photo by Fred Dufour/AFP Photo) 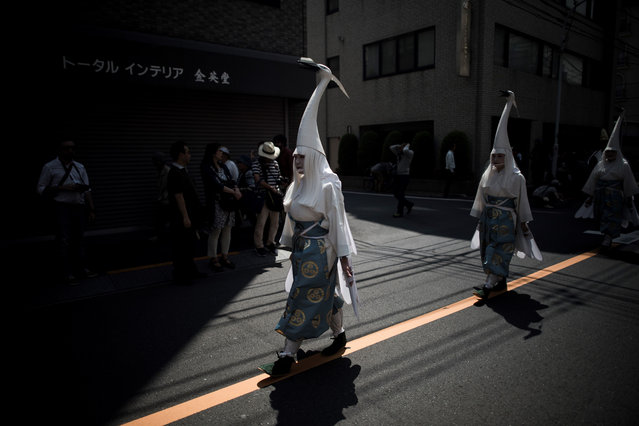 In this picture taken on May 19, 2017, heron- hooded dancers parade during the Sanja Matsuri festival in Tokyo. (Photo by Fred Dufour/AFP Photo) 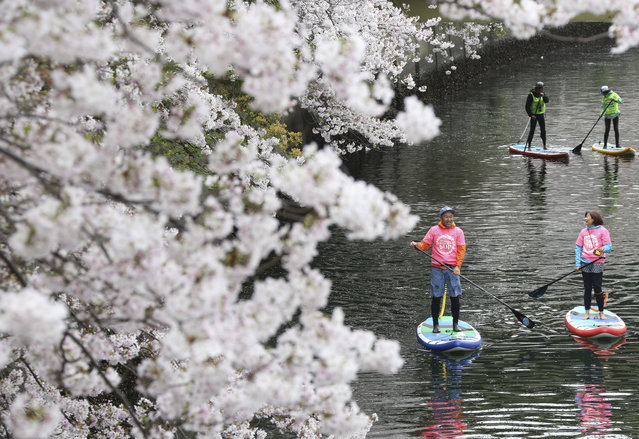 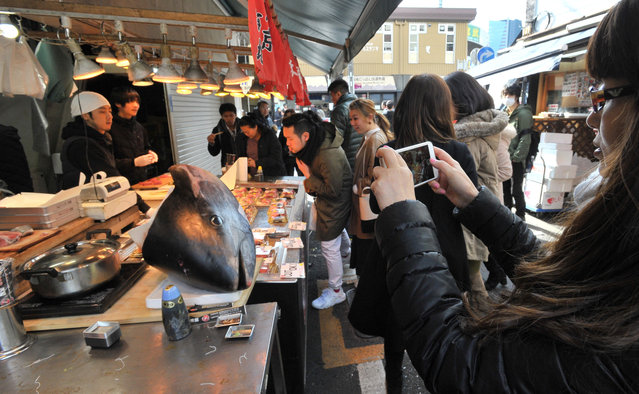