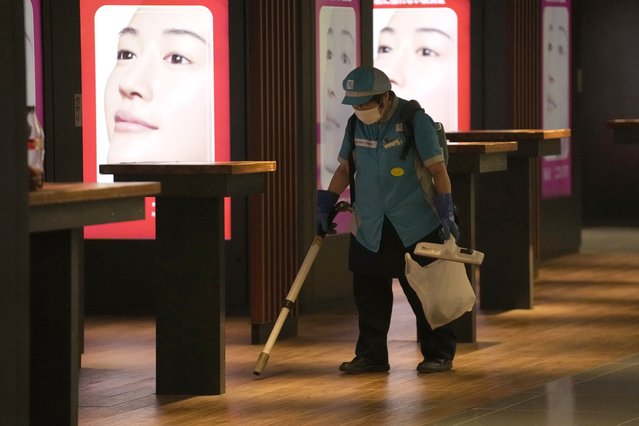 An employee wearing a protective mask to help curb the spread of the coronavirus cleans the floor at the underneath of a subway station Thursday, July 29, 2021, in Tokyo. (Photo by Eugene Hoshiko/AP Photo) 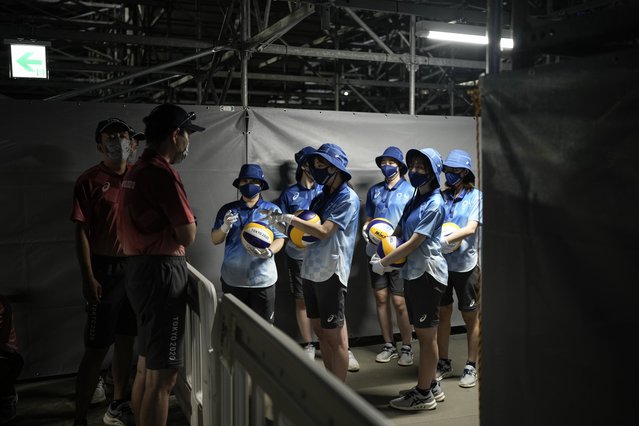 Olympic workers wait before entering the court for a women's beach volleyball match between Argentina and China at the 2020 Summer Olympics, Thursday, July 29, 2021, in Tokyo, Japan. (Photo by Felipe Dana/AP Photo) 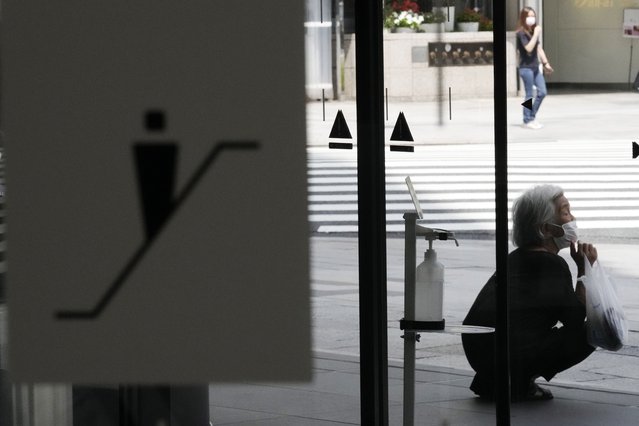 A woman wearing a protective mask to help curb the spread of the coronavirus takes shelter in the shade from high temperature Thursday, July 29, 2021, in Tokyo. (Photo by Eugene Hoshiko/AP Photo) 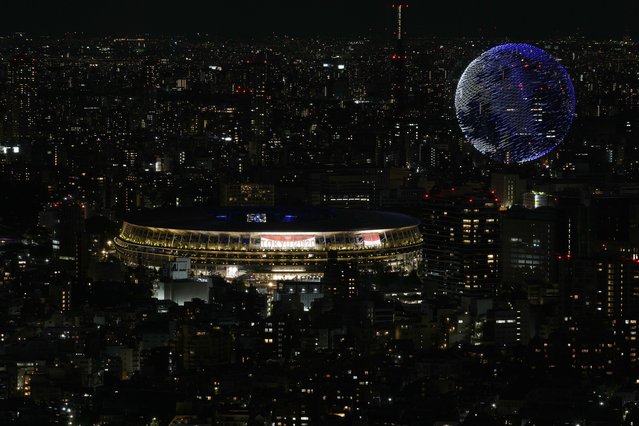 Drones flying over the National Stadium during the opening ceremony of 2020 Tokyo Olympics is seen from Shibuya Sky observation deck Friday, July 23, 2021, in Tokyo, Japan. (Photo by Eugene Hoshiko/AP Photo) 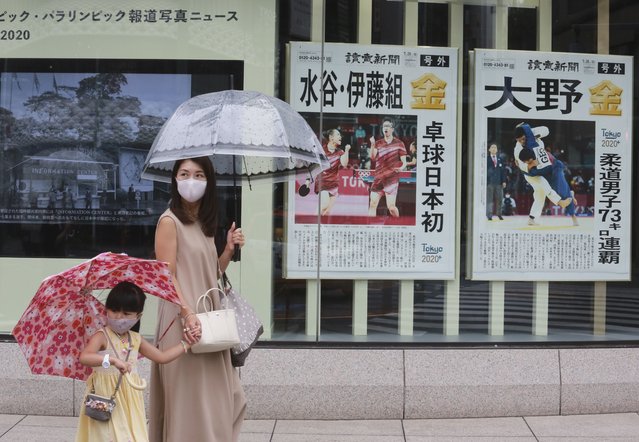 People wearing face masks to protect against the spread of the coronavirus walk past extra papers reporting on Japanese gold medalists at Tokyo Olympics, in Tokyo Tuesday, July 27, 2021. (Photo by Koji Sasahara/AP Photo) 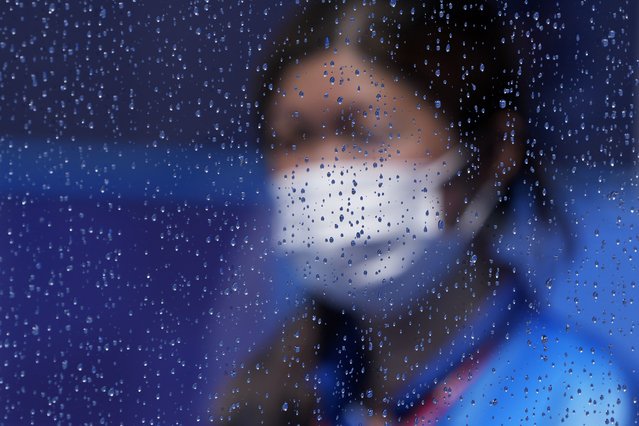 A masked worker walks by a rain-covered window after a rain storm at a field hockey match at the 2020 Summer Olympics, Tuesday, July 27, 2021, in Tokyo, Japan. (Photo by John Locher/AP Photo) 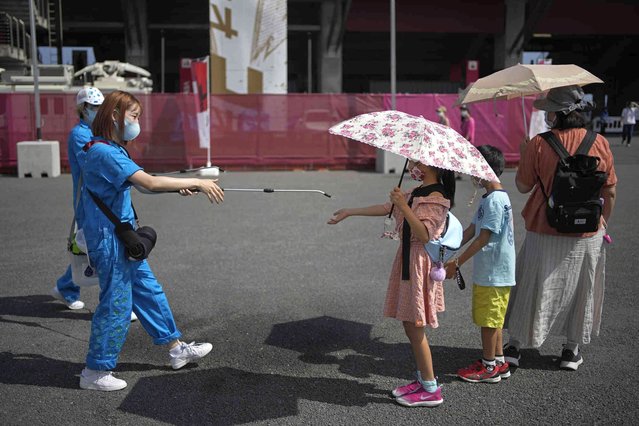 A volunteer sprays water on children as they use umbrellas to beat the heat outside the Fuji International Speedway, the finish for the women's cycling road race that is underway, at the 2020 Summer Olympics, Sunday, July 25, 2021, in Oyama, Japan. (Photo by Christophe Ena/AP Photo) 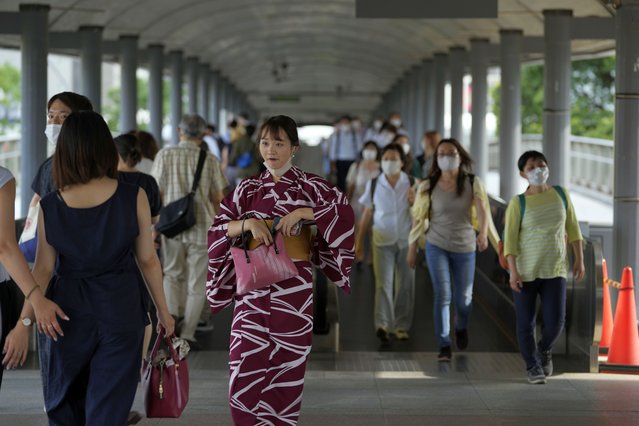 People wearing protective masks pass through a pedestrian bridge Friday, July 30, 2021, in Yokohama, south of Tokyo. Japan is set to expand the coronavirus state of emergency in Tokyo to neighboring prefectures including Saitama, Chiba and Kanagawa, where Yokohama is located, and the western city of Osaka as infections surge to new highs while the capital hosts the Olympics. (Photo by Kiichiro Sato/AP Photo) 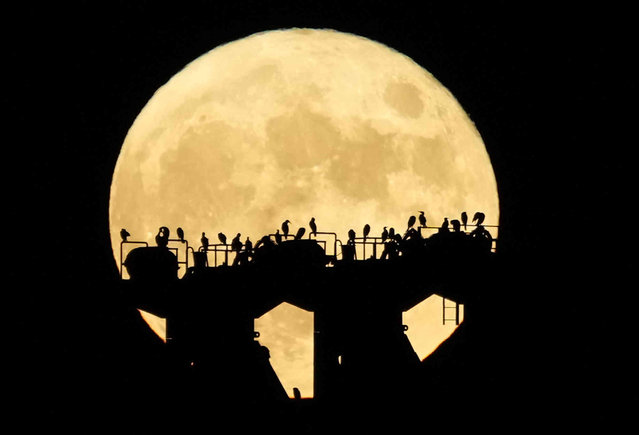 Birds are silhouetted against the rising full moon Saturday, July 24, 2021, during the 2020 Summer Olympic Games, in Tokyo, Japan. (Photo by Dmitri Lovetsky/AP Photo) 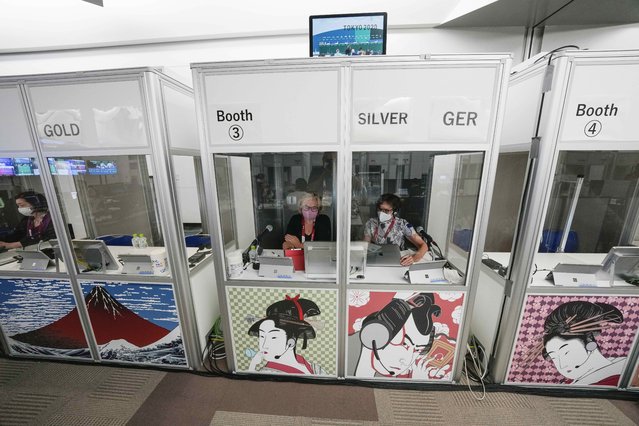 Interpreters work at the main press center during the 2020 Summer Olympics, Friday, July 30, 2021, in Tokyo, Japan. Unlike previous Olympics, all the interpretation is being done remotely with most interpreters working in booths at the main center. Their simultaneous translation can be accessed at all Olympic venues on an app. This eliminates interpreters getting tied up in traffic heading to an venue. (Photo by Luca Bruno/AP Photo) 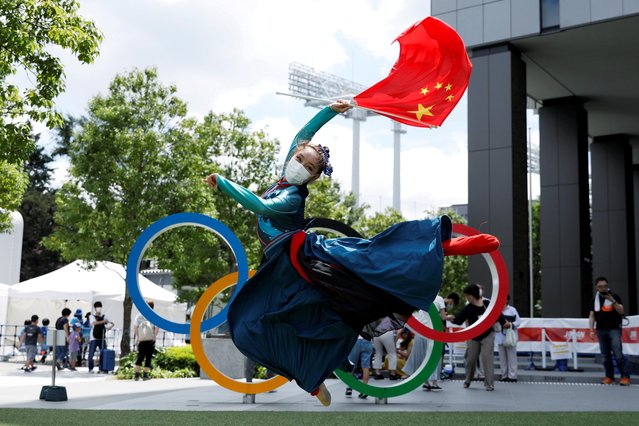 Mongolian Chinese performs a traditional Chinese dance in front of the Olympic Rings located near the National Stadium, the main stadium for the 2020 Tokyo Olympic Games in Tokyo, Japan July 29 2021. (Photo by Androniki Christodoulou/Reuters) 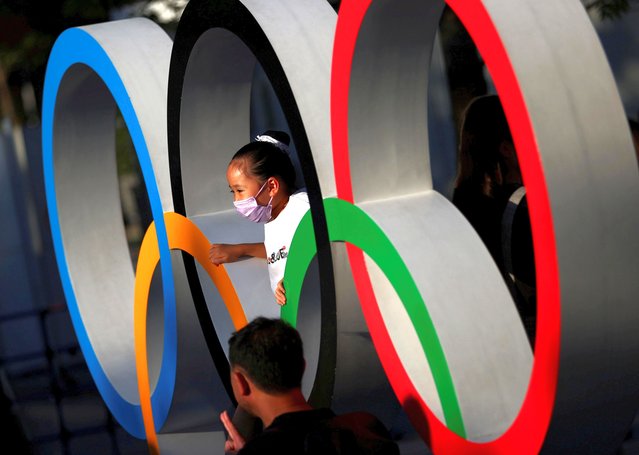 A girl wearing a protective mask is seen on an Olympic rings monument outside the National Stadium, the main stadium of Tokyo 2020 Olympic and Paralympic Games, amid the coronavirus disease (COVID-19) pandemic, in Tokyo, Japan on July 31, 2021. (Photo by Issei Kato/Reuters) 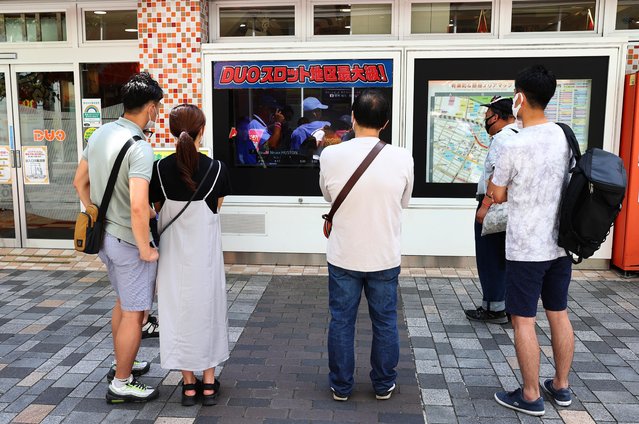 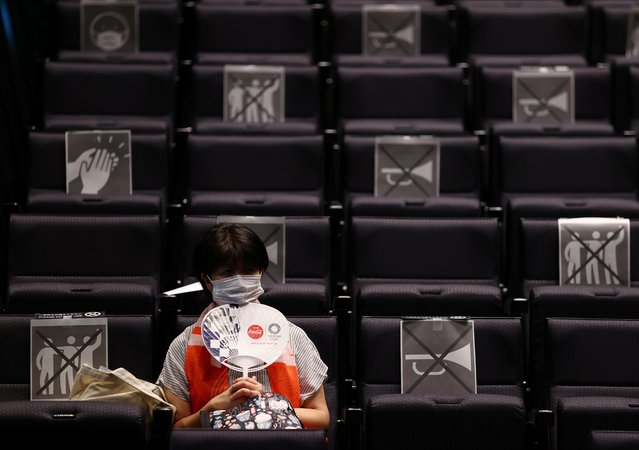 A woman reacts as she watches live broadcasting of volleyball match between Japan and Poland on a large screen during a public viewing event for Tokyo 2020 Olympic Games at a theatre in Takasaki, Gunma Prefecture, Japan, July 30, 2021. (Photo by Kim Kyung-Hoon/Reuters) 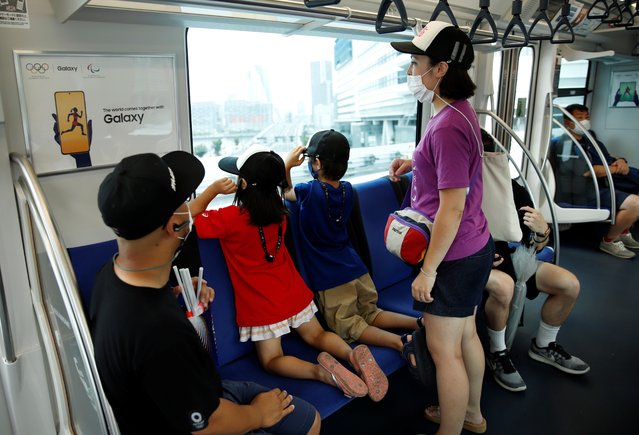 The Itoyama family wanted to buy tickets to watch the Tokyo Games but they were only able to buy one day tickets for the Yurikamome train, so that they can watch the BMX races at Ariake Urban Sports Park from the train and the nearest platform, in Tokyo, Japan July 30 2021. (Photo by Androniki Christodoulou/Reuters) 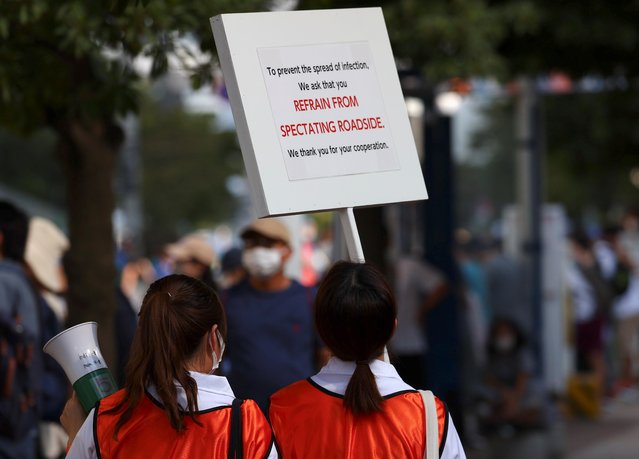 Staff members display a sign asking members of the public to refrain from spectating on the roadside, during the men's triathlon at Odaiba Marine Park in Tokyo, Japan, July 26, 2021. (Photo by Issei Kato/Reuters) 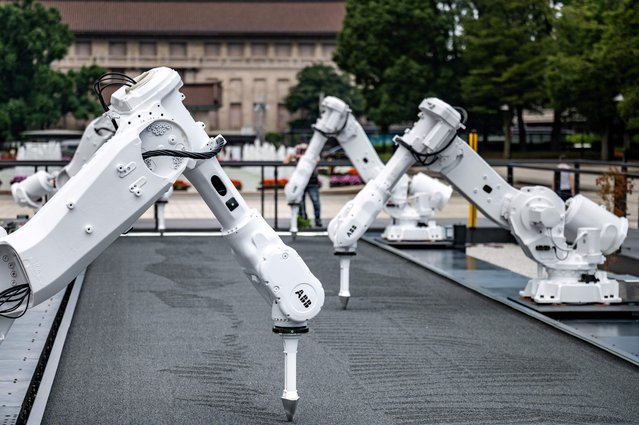 A large-scale outdoor robotic art installation inspired by the Olympic and Paralympic Games “The Constant Gardeners” by Jason Bruges is seen making the patterns referring to the movement of the Olympic flame torch runners, at Ueno park of Tokyo, as part of “Tokyo Tokyo FESTIVAL Special 13” on July 28, 2021. (Photo by Philip Fong/AFP Photo) 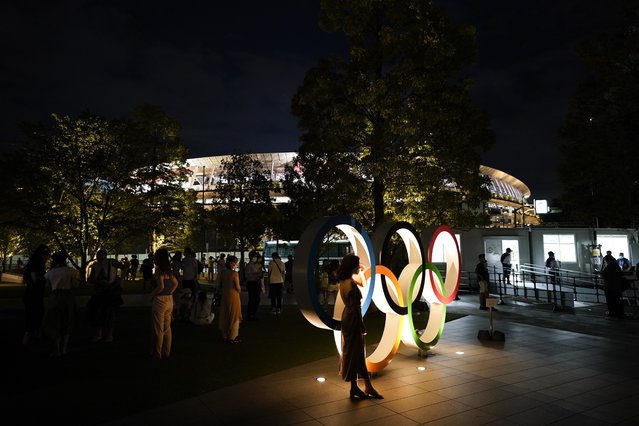 People take pictures with the Olympic rings outside the Olympic Stadium during the 2020 Summer Olympics, Saturday, July 31, 2021, in Tokyo, Japan. (Photo by Jae C. Hong/AP Photo) 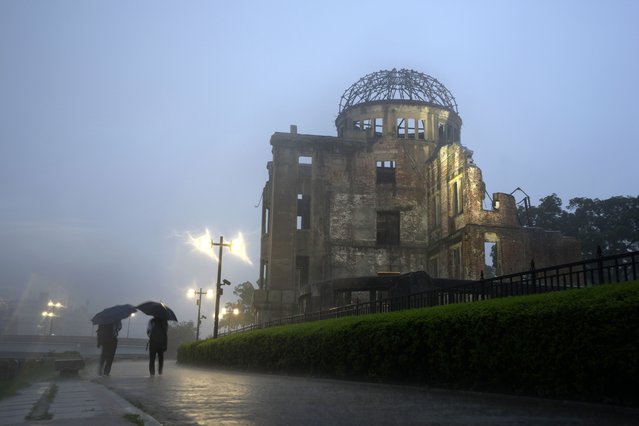 In this July 15, 2021, file photo, men walk in a heavy rain near the Atomic Bomb Dome in Hiroshima, western Japan. Japanese Prime Minister Yoshihide Suga said Monday, July 26, 2021, that he has decided to recognize 84 Hiroshima residents who were exposed to highly radioactive “black rain” just after the U.S. atomic bombing as “hibakusha" eligible for official medical support. (Photo by Eugene Hoshiko/AP Photo/File) 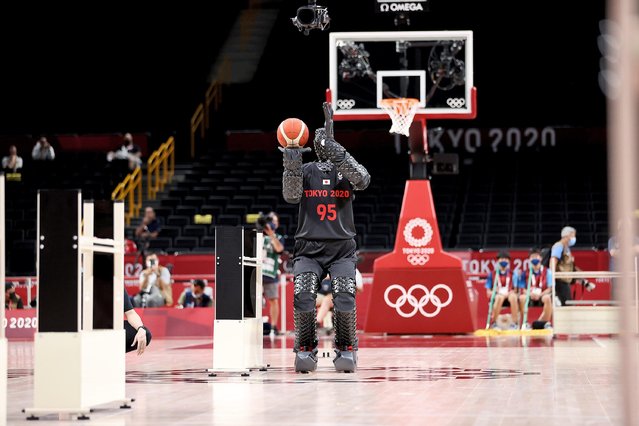 A robot shoots baskets during halftime of the Men's Preliminary Round Group A game between the United States and Iran on day five of the Tokyo 2020 Olympic Games at Saitama Super Arena on July 28, 2021 in Saitama, Japan. (Photo by Gregory Shamus/Getty Images)
Edit Del
04 Aug 2021 08:44:00, post received 0 comments
Publication archive:
←   →
Popular tags:
All tags
Last searches: