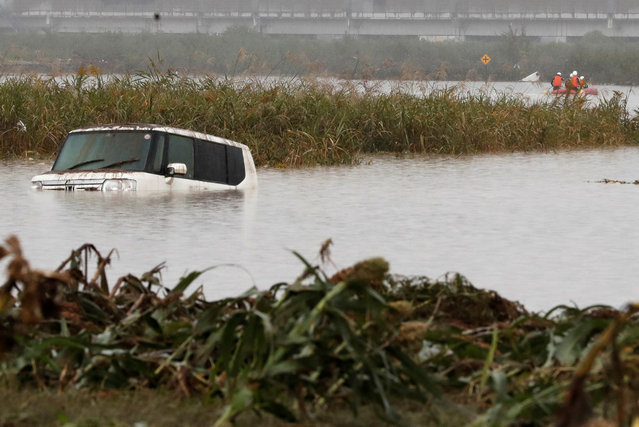 A partially submerged car is seen in the aftermath of Typhoon Hagibis, which caused severe floods, near the Chikuma River in Nagano Prefecture, Japan, October 14, 2019. (Photo by Kim Kyung-Hoon/Reuters) 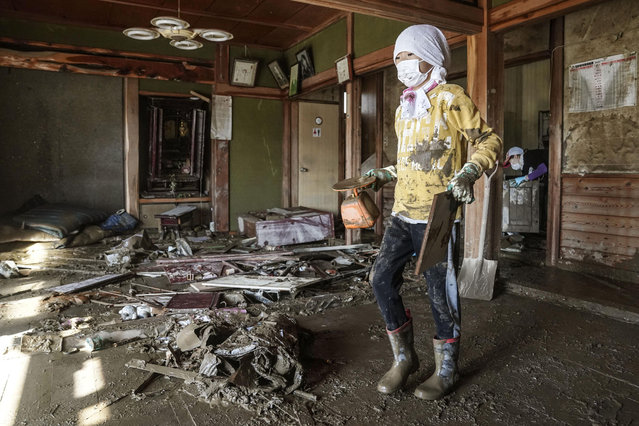 A boy cleans a house devastated by Typhoon Hagibis, in Nagano, central Japan Wednesday, October 16, 2019. The typhoon hit Japan's main island on Saturday with strong winds and historic rainfall that caused more than 200 rivers to overflow, leaving thousands of homes flooded, damaged or without power. (Photo by Koki Sengoku/Kyodo News via AP Photo) 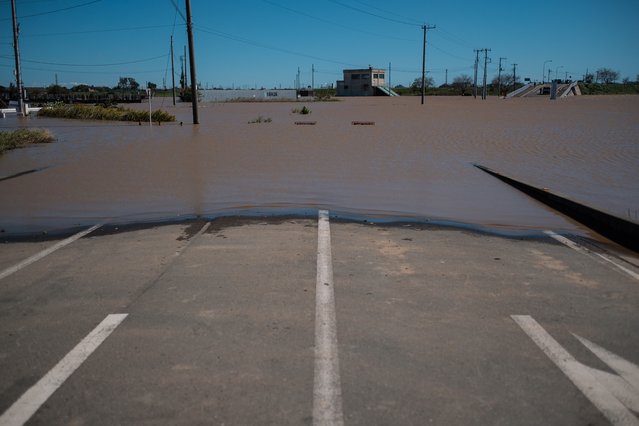 A large area flooded in Kawagoe city, in Japan on October 13, 2019. Powerful typhoon Hagibis and aftermath flood ripped across the country, killing 11 people and dozen of missing persons. (Photo by Nicolas Datiche/SIPA Press) 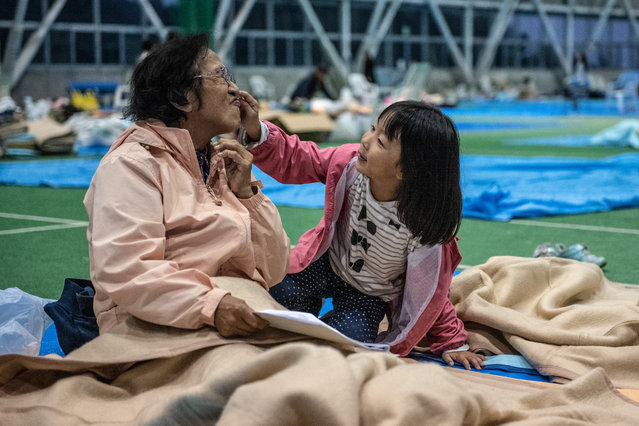 A grandmother and granddaughter play together in a refuge centre for people displaced by Typhoon Hagibis, on October 14, 2019 in Nagano, Japan. Japan has mobilised 110,000 rescuer workers after Typhoon Hagibis, the most powerful storm in decades, swept across the country leaving 37 dead and around 20 missing. (Photo by Carl Court/Getty Images) 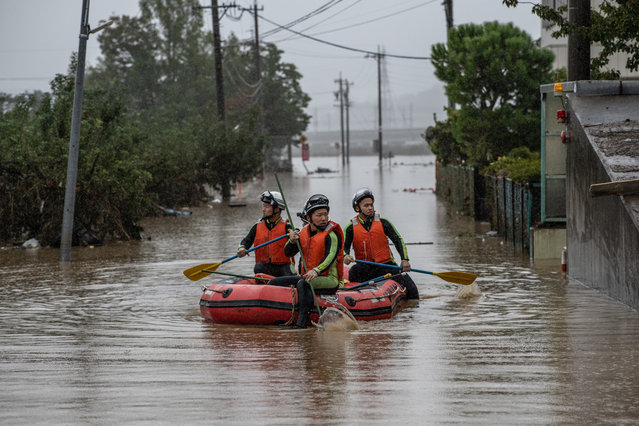 Rescue workers search an area that was flooded by Typhoon Hagibis, on October 14, 2019 in Nagano, Japan. Japan has mobilised 110,000 rescuer workers after Typhoon Hagibis, the most powerful storm in decades, swept across the country leaving 37 dead and around 20 missing. (Photo by Carl Court/Getty Images) 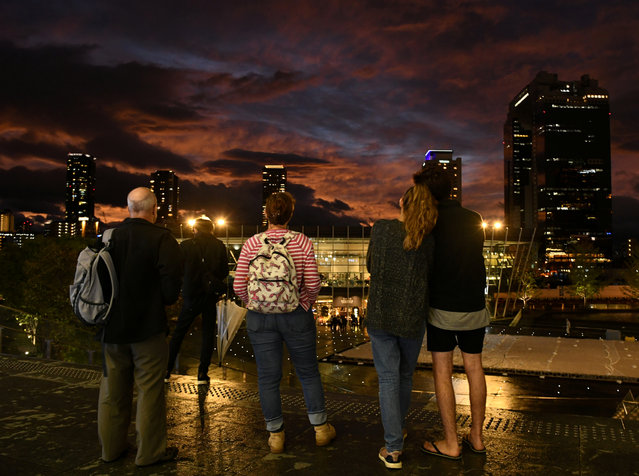 People look at clouds during sunset near Osaka Station, as typhoon “Hagibis” approaches Japan, in Osaka, Japan on October 12, 2019. (Photo by Annegret Hilse/Reuters) 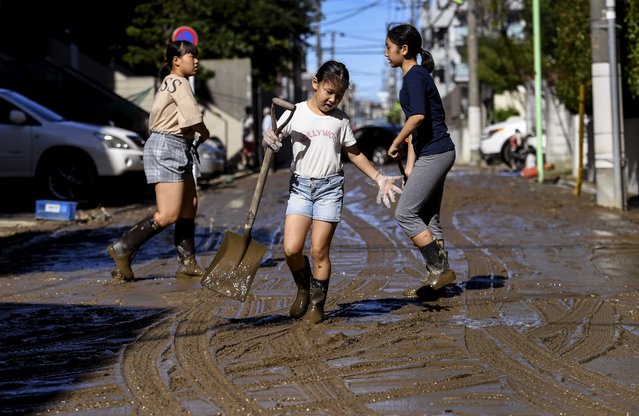 Children clear mud from a street after floodwaters receded in the aftermath of Typhoon Hagibis, in Kawasaki on October 13, 2019. Japan's military scrambled October 13 to rescue people trapped by flooding after powerful Typhoon Hagibis ripped across the country, killing at least 11 people and leaving more than a dozen missing. (Photo by William West/AFP Photo) 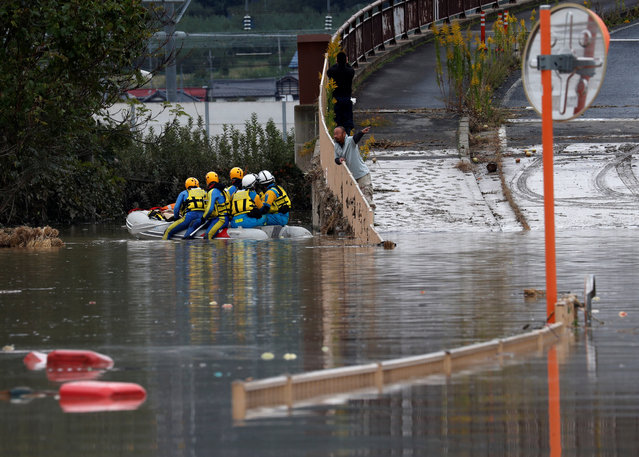 A man talks with rescue workers searching a flooded area in the aftermath of Typhoon Hagibis, which caused severe floods at the Chikuma River in Nagano, Nagano Prefecture, Japan, October 14, 2019. (Photo by Kim Kyung-Hoon/Reuters) 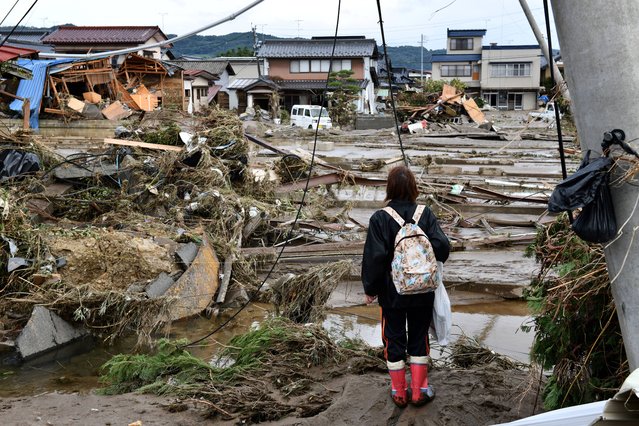 A woman looks at flood-damaged homes in Nagano on October 15, 2019, after Typhoon Hagibis hit Japan on October 12 unleashing high winds, torrential rain and triggered landslides and catastrophic flooding. Rescuers in Japan worked into a third day on October 15 in an increasingly desperate search for survivors of a powerful typhoon that killed nearly 70 people and caused widespread destruction. (Photo by Kazuhiro Nogi/AFP Photo) 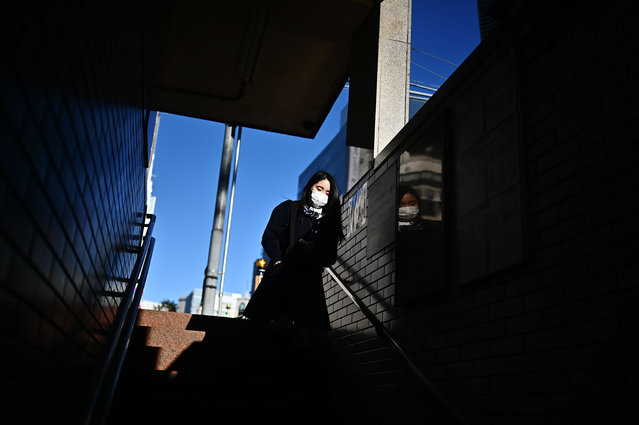 A woman walks down the stairs of a train station in Tokyo's Ginza district on October 23, 2019. (Photo by Charly Triballeau/AFP Photo) 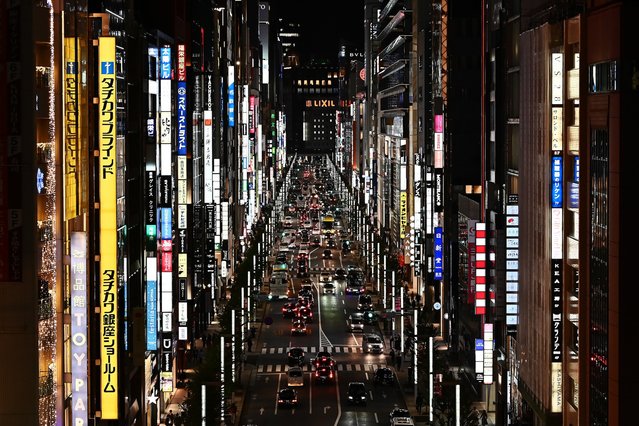 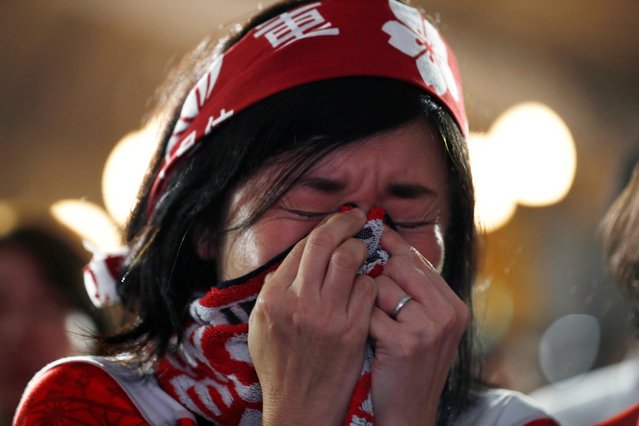 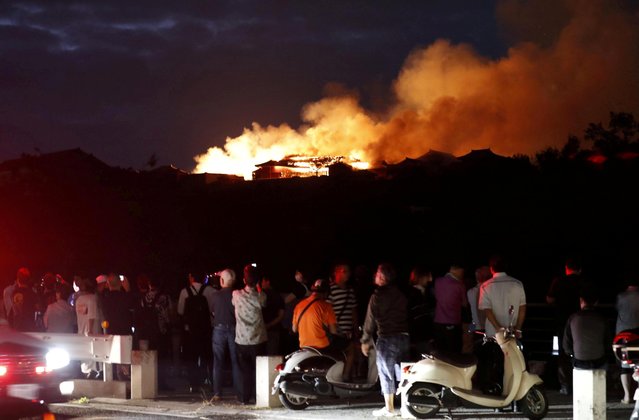 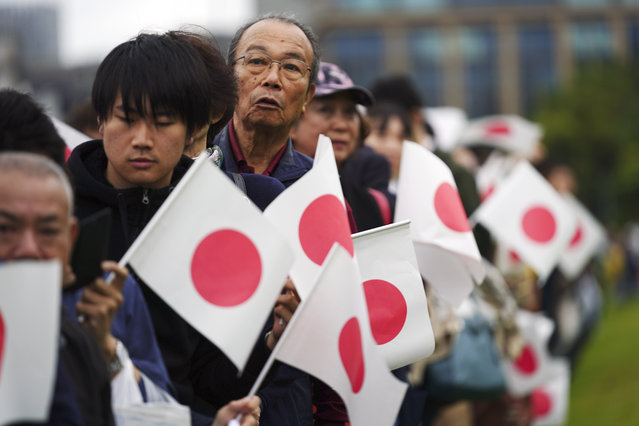 Holding nationals flags, people line up and wait outside of the Imperial Palace during the enthronement ceremony for Emperor Naruhito Tuesday, October 22, 2019, in Tokyo. (Photo by Eugene Hoshiko/AP Photo) 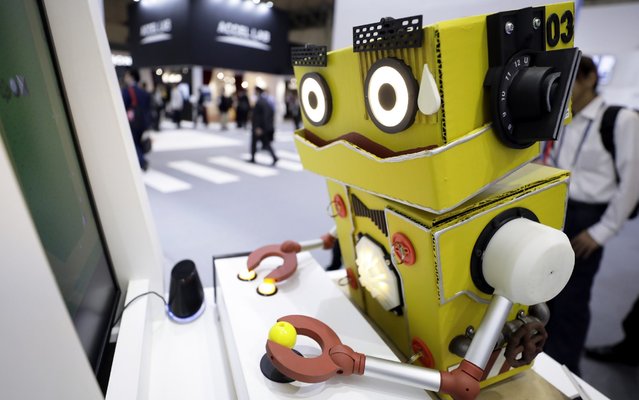 An AI Gamer “Q56” robot plays a video game during a demonstration at the Bandai Namco Holdings Inc. booth at the Combined Exhibition of Advanced Technologies in Chiba, Japan on October 16, 2019. (Photo by Kiyoshi Ota/Bloomberg) 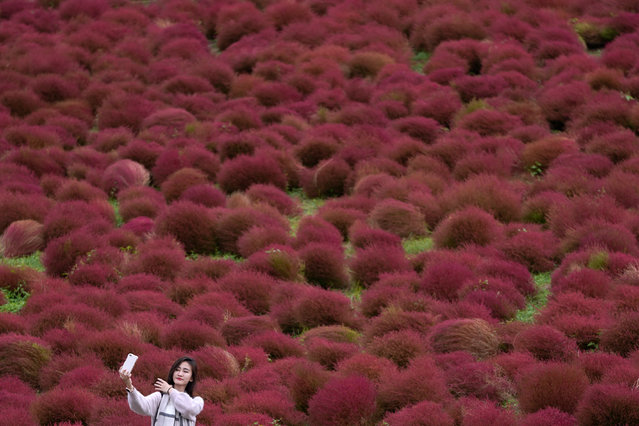 A woman takes a selfie in a field of Kochia (Bassia scoparia), a kind of tumbleweed, at the Hitachi Seaside Park in Hitachinaka, Japan, 21 October 2019. Over 30,000 Kochia balls are planted every year in June in the 350-hectare field. The plants then gradually turn their color from green to red between July and October. (Photo by Toru Hanai/EPA/EFE) 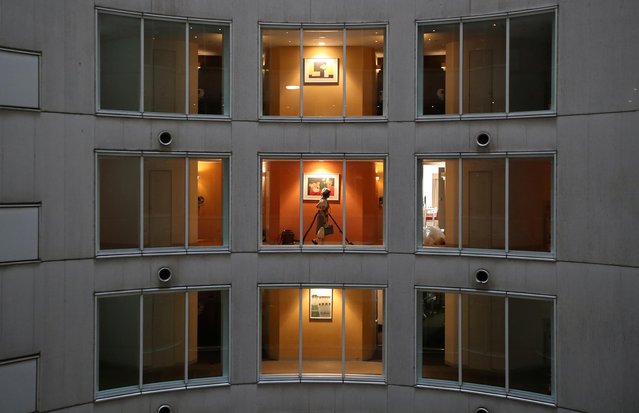 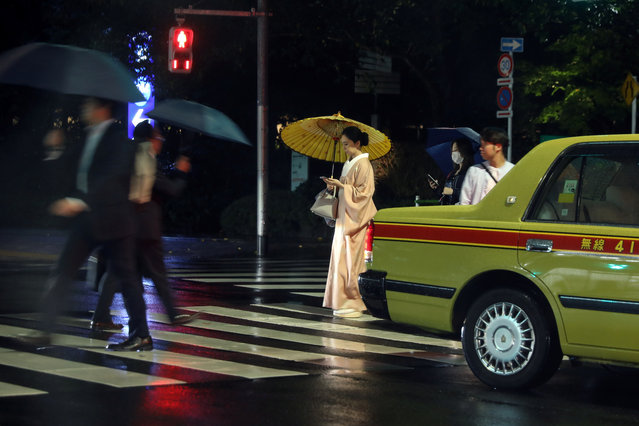 A taxi cab passes a woman wearing a kimono at a street crossing in Tokyo, Japan on October 17, 2019. Japan is hosting the Rugby World Cup and will also host the Olympic Games in 2020. (Photo by Kevin Coombs/Reuters) 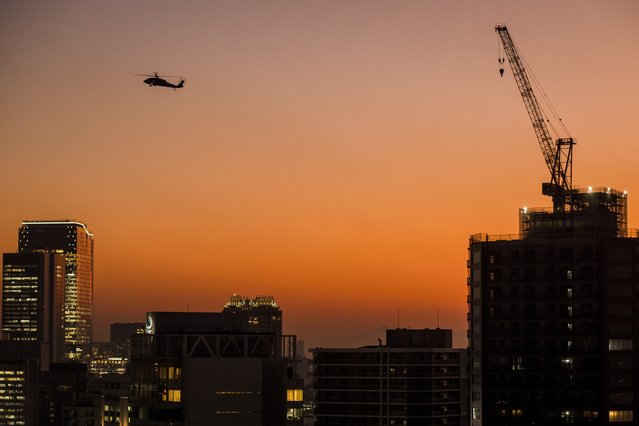 The sun sets as a helicopter flies over the Harajuku district of Tokyo on November 1, 2019. The Japan 2019 Rugby World Cup is being held in the country from September 20 to November 2. (Photo by Odd Andersen/AFP Photo) 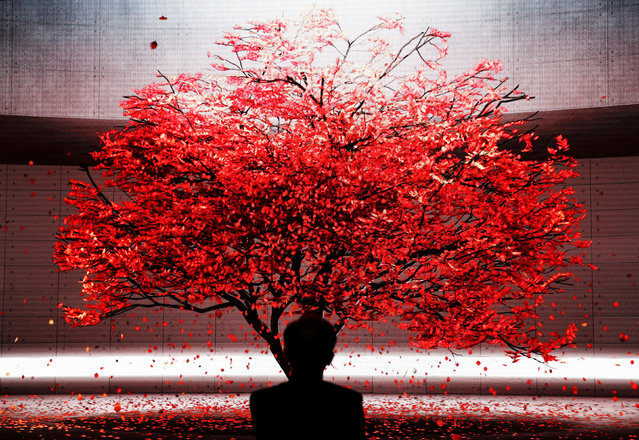