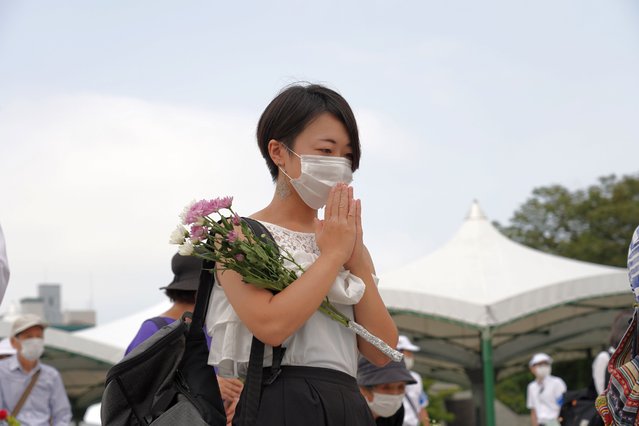 A woman prays while wearing a face mask at the Hiroshima Peace Memorial Ceremony on August 6, 2020. Hiroshima marks the 75th anniversary of the U.S. atomic bombing which killed about 150,000 people and destroyed the entire city during World War II. (Photo by Jinhee Lee/SOPA Images/Rex Features/Shutterstock) 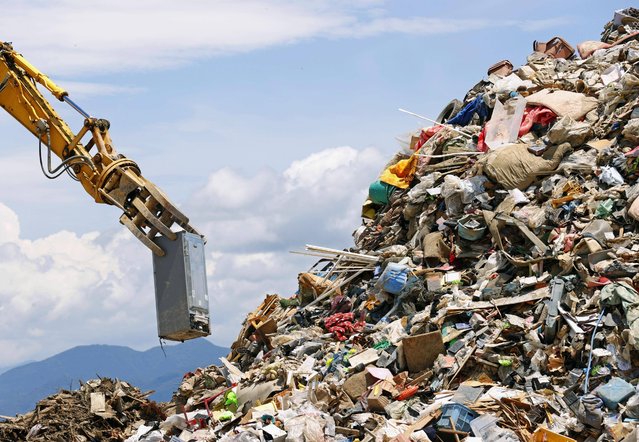 Disaster waste is seen piled up on July 22, 2020, in Hitoyoshi, Kumamoto Prefecture, hit by torrential rain earlier in the month. (Photo by Kyodo News via Getty Images) 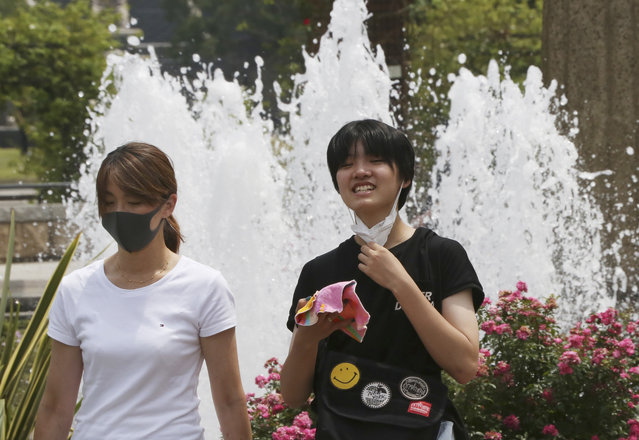 People wearing face masks to protect against the spread of the new coronavirus walk at park in Yokohama near Tokyo, Monday, August 10, 2020. (Photo by Koji Sasahara/AP Photo) 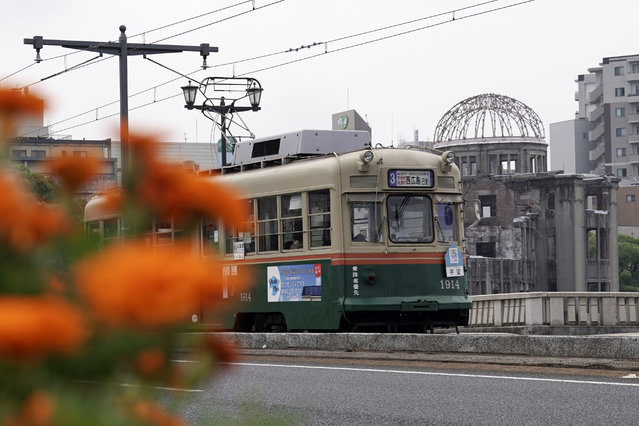 A running tram is seen near the Atomic Bomb Dome in Hiroshima, western Japan, Monday, August 3, 2020. A tram which survived the Hiroshima atomic bombing will run, without any passenger, on the streets on Aug. 6 to commemorate the day of atomic bombing in the city. (Photo by Eugene Hoshiko/AP Photo) 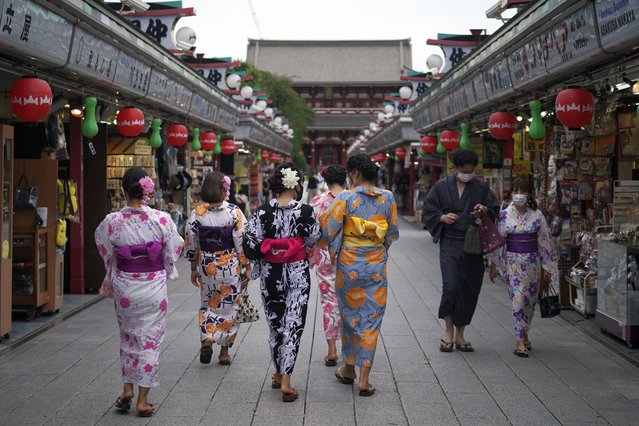 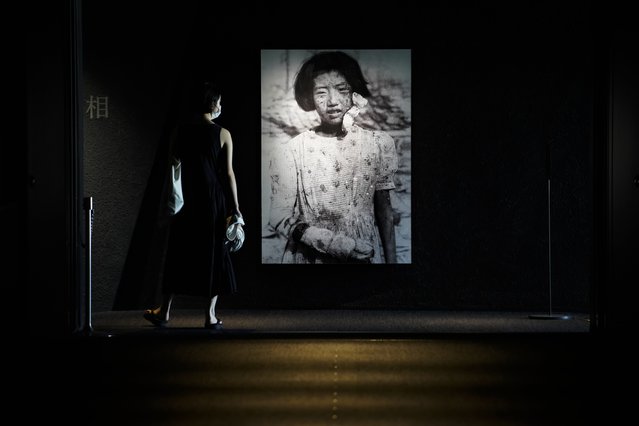 A visitor looks at photographs of the Hiroshima bombing survivors, at the Hiroshima Peace Memorial Museum in Hiroshima, Japan, 05 August 2020. On 06 August 2020 Japan will mark the 75th anniversary of the bombing of Hiroshima. In 1945 the United States dropped two nuclear bombs over the cities of Hiroshima and Nagasaki on 06 and 09 August respectively, killing more than 200,000 people. This year’s annual commemoration events were either canceled or scaled down amid the ongoing coronavirus pandemic. (Photo by Dai Kurokawa/EPA/EFE) 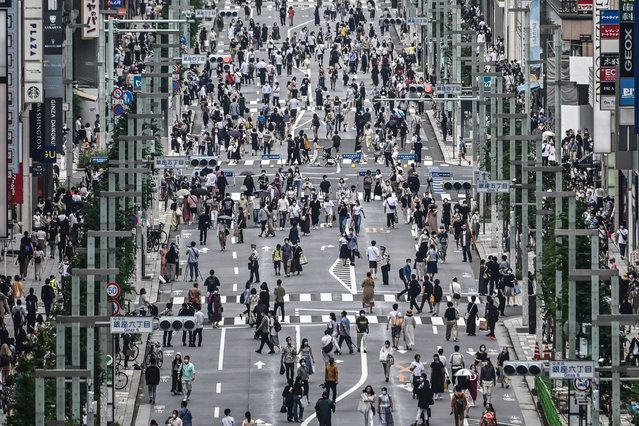 People walk on a street in Tokyo on July 24, 2020. Some 260 new cases COVID-19 coronavirus infections were recorded in the Japanese capital on July 24. (Photo by Charly Triballeau/AFP Photo) 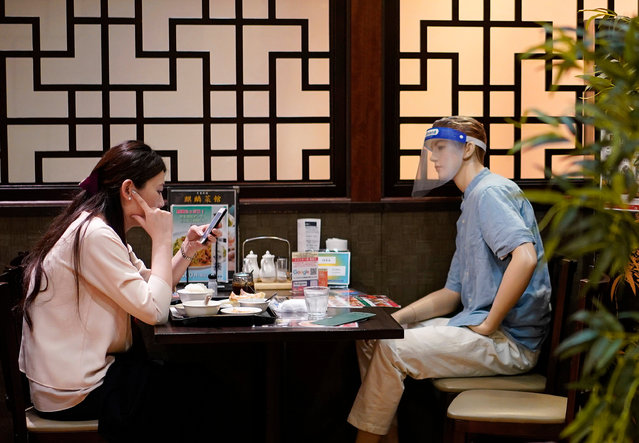 A young woman looks at her smartphone sitting in front of a mannequin use to keep social distancing at a Chinese cuisine restaurant in Tokyo, Japan, 27 July 2020. Japan's total number of COVID-19 cases crossed the 30,000 line showing the new coronavirus pandemic is spreading across the country and not only in Tokyo and Osaka megalopolis. (Photo by Franck Robichon/EPA/EFE) 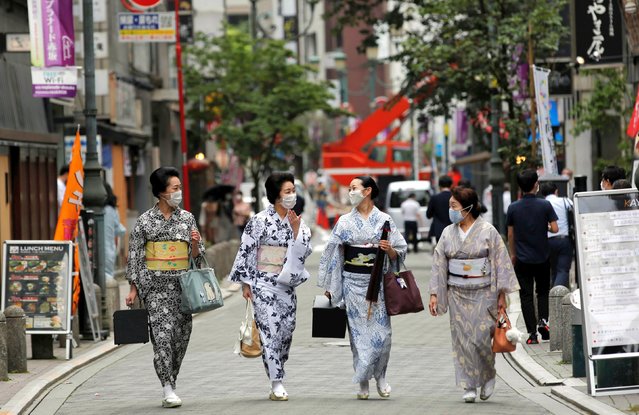 Maki, Mayu, Koiku and Ikuko, who are geisha, wear protective face masks as they walk to a restaurant after attending a dance class, during the coronavirus disease (COVID-19) outbreak, in Tokyo, Japan. July 13, 2020. Ikuko fears an extended pandemic could prompt some geisha to quit. “Now is the worst of the worst”, she said. “How are we going to get through? It'll take all of our body and soul”. (Photo by Kim Kyung-Hoon/Reuters) 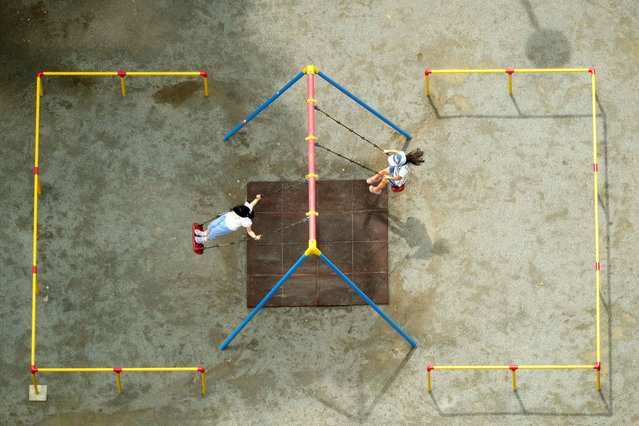 This overhead image shows children playing on swings at a park in Tokyo on July 26, 2020. (Photo by Kazuhiro Nogi/AFP Photo) 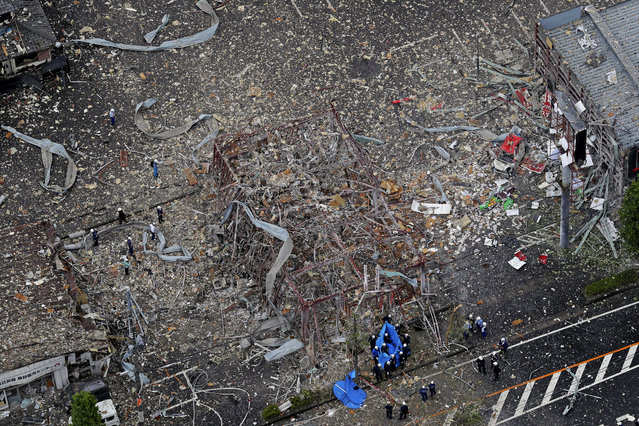 Photo taken from a Kyodo News helicopter on July 30, 2020, shows the scene of an explosion that left one person dead and 17 others injured in Koriyama in Fukushima Prefecture, northeastern Japan. The explosion occurred at a “shabu shabu”-style hot pot restaurant in an area with homes and restaurants and is believed to have been caused by a gas leak. (Photo by Kyodo News via AP Images) 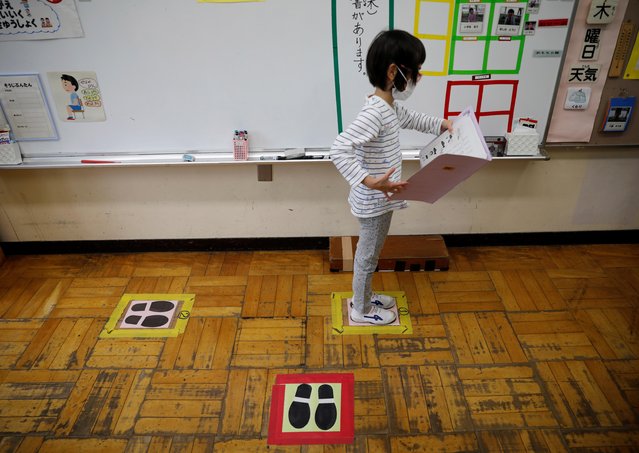 A student wearing a protective face mask stands on a mark for social distancing in a classroom at Takanedai Daisan elementary school in Funabashi, east of Tokyo, Japan, July 16, 2020. (Photo by Kim Kyung-Hoon/Reuters) 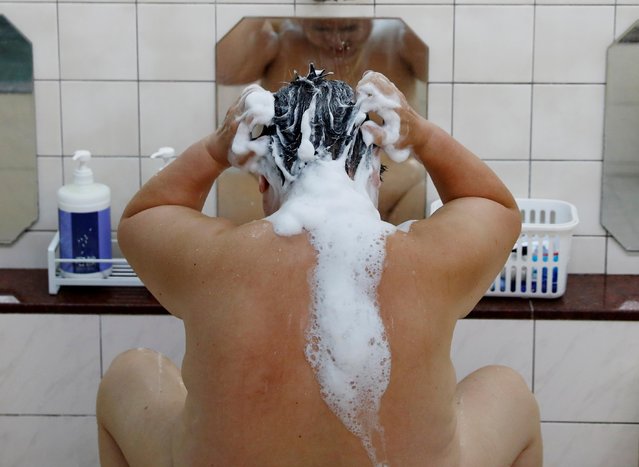 A customer washes his hair at public bathhouse “Daikoku-yu” in Tokyo, Japan on July 1, 2020. The government deemed Japan's few remaining bathhouses as critical for public hygiene so it requested they stay open, while at the same time encouraging people to stay at home during a state of emergency to prevent the spread of COVID-19 which has killed around 1,000 Japanese. (Photo by Kim Kyung-Hoon/Reuters) 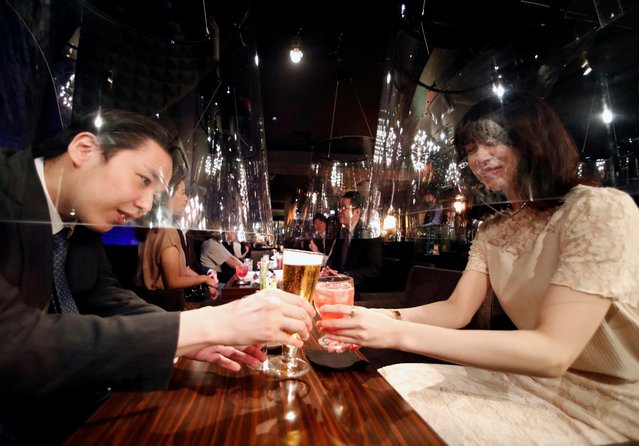 Goldfish bowl-like acrylic screens used as part of new social distancing measures, where male customers sit inside the screens to be entertained by female staff, are installed at Jazz Lounge Encounter, a form of night club for seeking encounters, at Ginza district in Tokyo, Japan on August 6, 2020. (Photo by Issei Kato/Reuters) 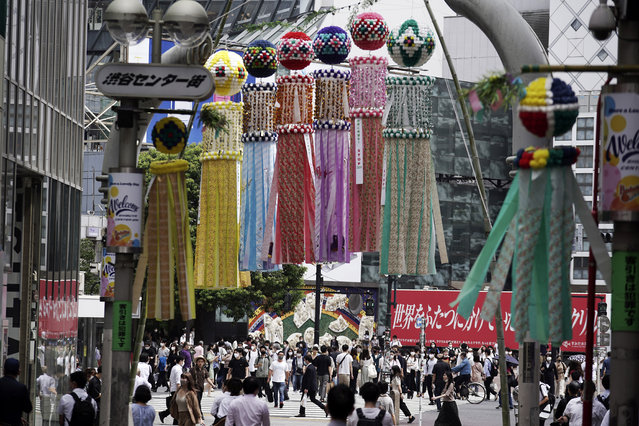 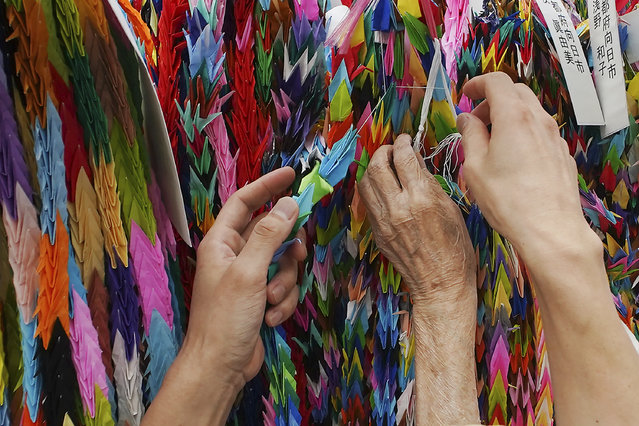 Hatsue Onda, center, is helped by Kengo Onda to offer strings of colorful paper cranes to the victims of the 1945 Atomic bombing near Hiroshima Peace Memorial Museum in Hiroshima, western Japan, Monday, August 3, 2020. The origami cranes that can be seen throughout the city became a symbol of peace because of atomic bomb survivor Sadako Sasaki, who, while battling leukemia, folded similar cranes using medicine wrappers after hearing an old Japanese story that those who fold a thousand cranes are granted one wish. (Photo by Eugene Hoshiko/AP Photo) 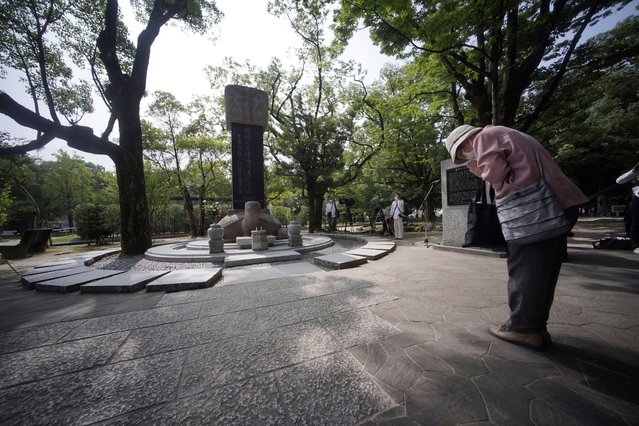 A woman prays before a memorial service for Korean atomic bomb victims in front of Monument to Korean Victims and Survivors at Hiroshima Peace Memorial Park in Hiroshima, western Japan, Wednesday, August 5, 2020. Hiroshima marks the 75th anniversary of the world's first atomic bombing on Aug. 6. (Photo by Eugene Hoshiko/AP Photo) 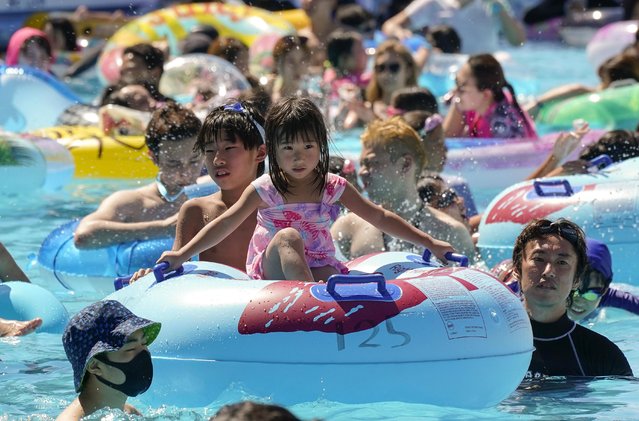 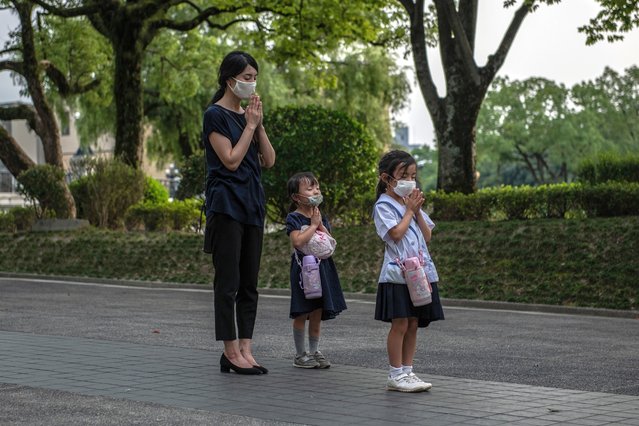 A mother and her daughters pray at the Students Peace Monument on the 75th anniversary of the Hiroshima atomic bombing, on August 6, 2020 in Hiroshima, Japan. In a ceremony that has been scaled back significantly because of Covid-19 coronavirus, Japan will mark the 75th anniversary of the first atomic bomb that was dropped by the United States on Hiroshima on August 6, 1945. The bomb instantly killed an estimated 70,000 people and thousands more in coming years from radiation effects. Three days later the United States dropped a second atomic bomb on Nagasaki which ended World War II. (Photo by Carl Court/Getty Images) 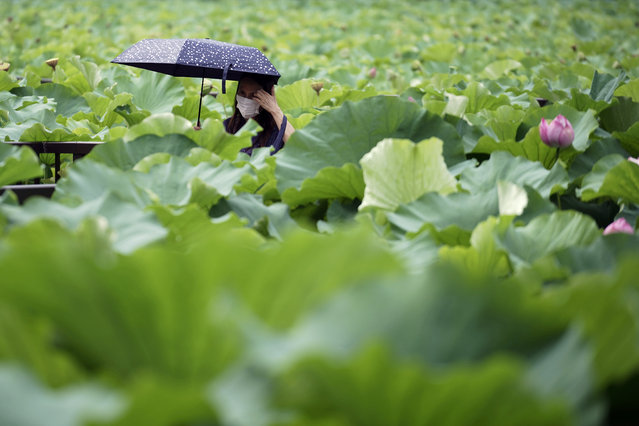 A woman wearing a protective mask to help curb the spread of the new coronavirus walks at a lake with lotus leaves under the scorching sun Thursday, August 13, 2020, in Tokyo. Temperatures rose up over 35 degrees Celsius (95 degrees Fahrenheit) in Tokyo, according to the Japan Meteorological Agency. (Photo by Eugene Hoshiko/AP Photo)
Edit Del
21 Aug 2020 00:01:00, post received 0 comments
Publication archive:
←   →
Popular tags:
All tags
Last searches: