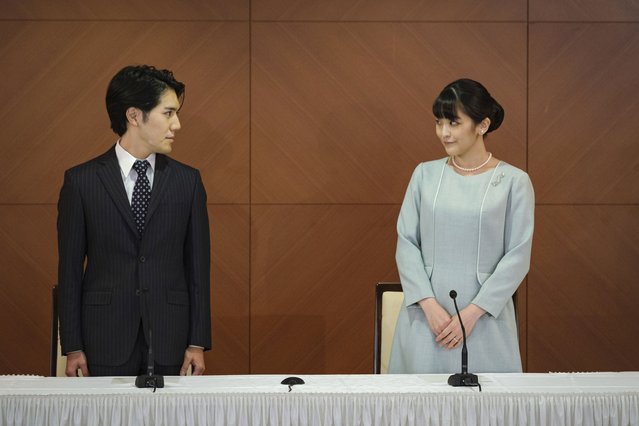 Japan's former Princess Mako, right, the elder daughter of Crown Prince Akishino and Crown Princess Kiko, and her husband Kei Komuro, look at each other during a press conference to announce their marriage at a hotel in Tokyo, Japan Tuesday, October 26, 2021. Former Princess Mako married the commoner and lost her royal status Tuesday in a union that has split public opinion after a three-year delay caused by a financial dispute involving her new mother-in-law. (Photo by Nicolas Datiche/Pool Photo via AP Photo) 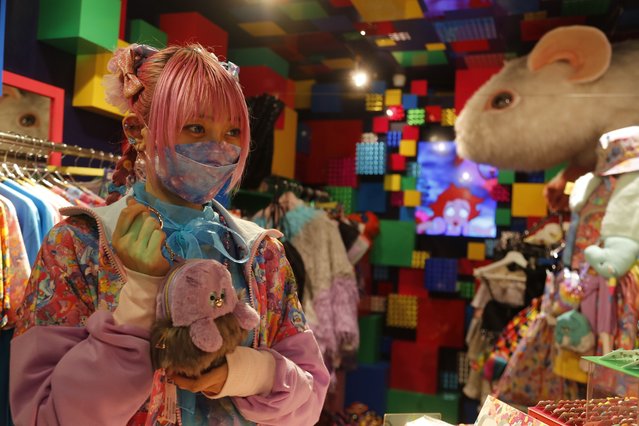 Sales clerk Emiry works at the “6%DOKIDOKI” store which specializes in “kawaii”, or cute products, in Tokyo's Harajuku district Friday, October 22, 2021. Filled with pink, fuzz and cuddly bears, the tiny store in the heart of the Harajuku district, is bursting with “kawaii”, the Japanese for “cuteness”. (Photo by Yuri Kageyama/AP Photo) 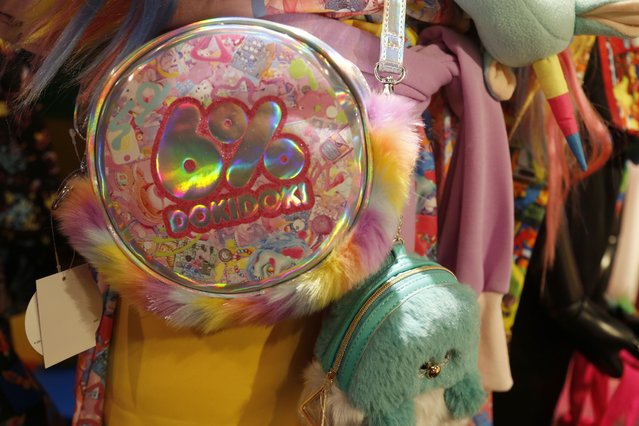 A bag on sale hangs at “6%DOKIDOKI” store along with other “kawaii”, or cute products, such as clothing and other knickknacks, in Tokyo's Harajuku district Friday, October 22, 2021. (Photo by Yuri Kageyama/AP Photo) 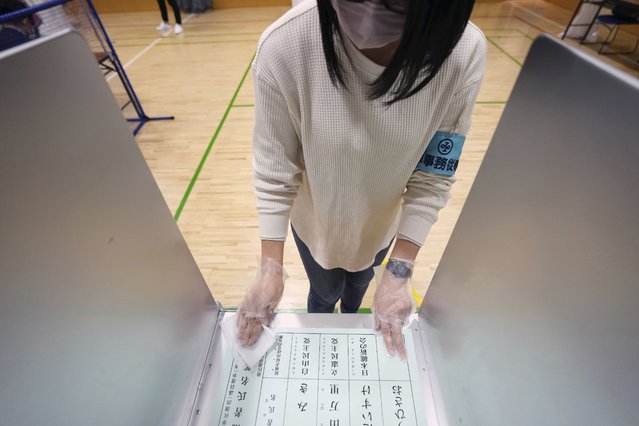 A staff member of a local election administration commission wearing a face mask disinfects one of the booths for voters in the lower house election at a polling station Sunday, October 31, 2021, in Tokyo. (Photo by Eugene Hoshiko/AP Photo) 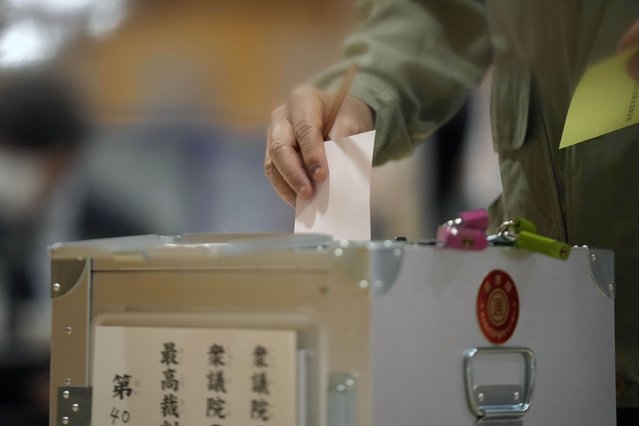 A voter casts a ballot in the lower house elections as representatives of a local election administration commission observes at a polling station Sunday, October 31, 2021, in Tokyo. (Photo by Eugene Hoshiko/AP Photo) 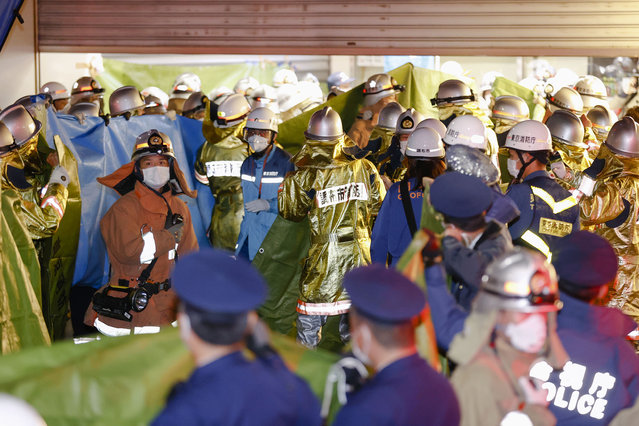 Emergency workers and police officers at a train station in Tokyo, Sunday October 31, 2021 after a man brandishing a knife on a commuter train stabbed several passengers before starting a fire, which sent people scrambling to escape and jumping from windows, police and witness said. (Photo by Kyodo News via AP Photo) 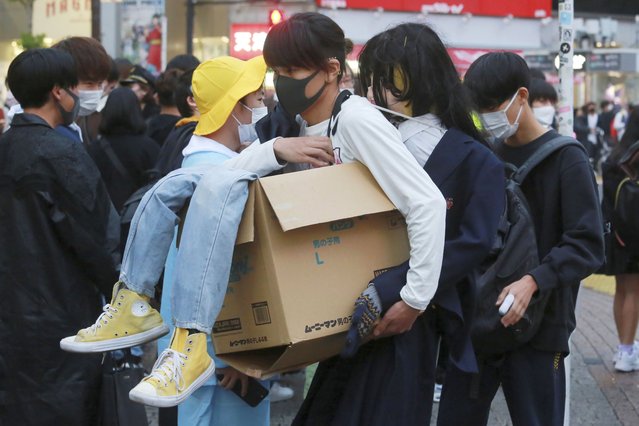 A woman dressed in a creative Halloween costume walks through the popular Shibuya district in Tokyo, Sunday, October 31, 2021. (Photo by Koji Sasahara/AP Photo) 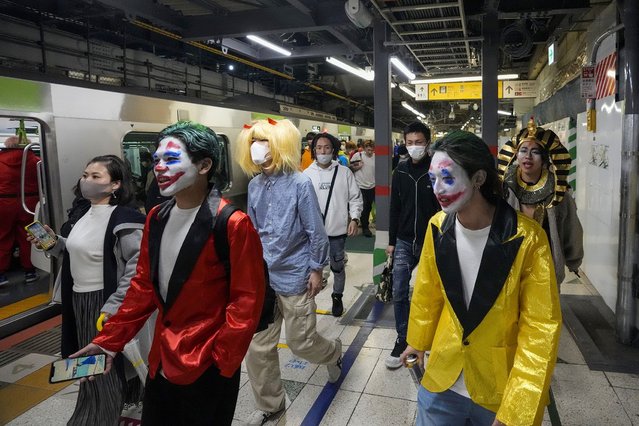 Halloween goers arrive in costumes at a train station as thousands continue gathering in Shibuya district, a popular gathering area for Halloween after midnight on Monday, November 1, 2021, in Tokyo. (Photo by Kiichiro Sato/AP Photo) 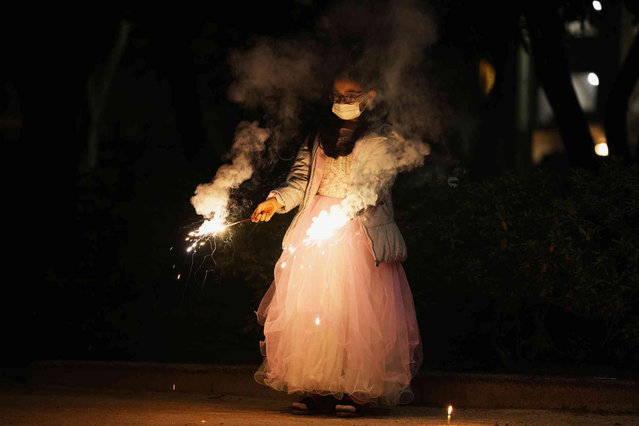 A girl from an Indian family living in Japan holds pieces of fireworks to celebrate Diwali, the Hindu festival of lights, at a park in Tokyo, Thursday, November 4, 2021. Diwali is typically celebrated by socializing and exchanging gifts with family and friends. A local Diwali festival held annually in the area was canceled this year due to the COVID-19 pandemic. (Photo by Hiro Komae/AP Photo) 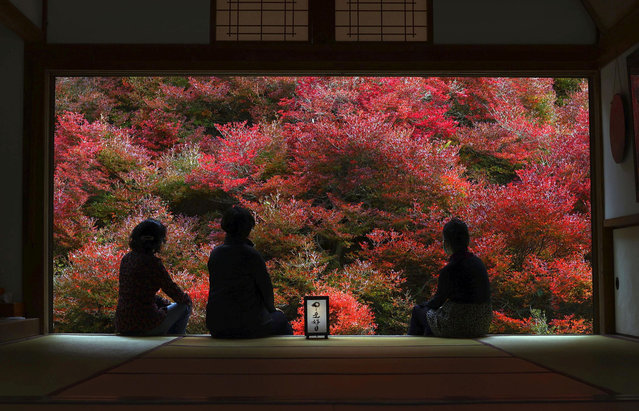 Visitors and autumn leaves are seen at Ankoku temple in Toyooka, Hyogo Prefecture, western Japan, November 8, 2021, in this photo taken by Kyodo. (Photo by Kyodo News via Reuters) 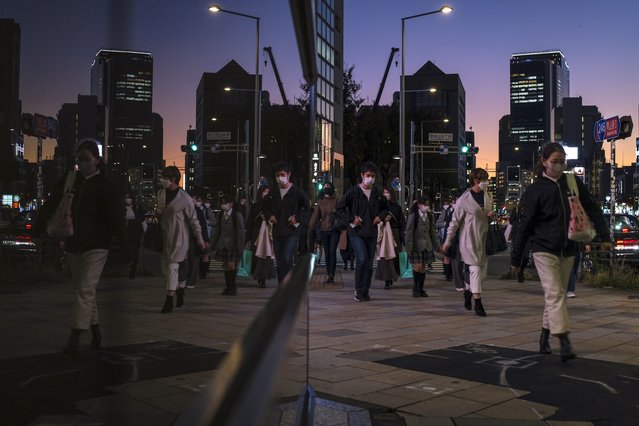 The sun sets in the Aoyama area of Tokyo, Wednesday, November 10, 2021. Restrictions on dining out and other everyday activities have been eased after the country's daily coronavirus cases reached their lowest levels in more than a year and more than 70% of Japan’s population is vaccinated against COVID-19. (Photo by Kiichiro Sato/AP Photo) 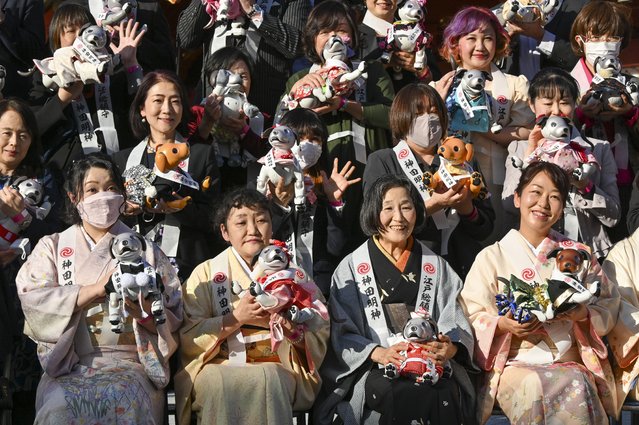 Owners of Sony's pet robot Aibo pose for a commemorative photo during an event to celebrate Aibo's third birthday and wish for good health in the future at Kanda shrine in Tokyo on November 12, 2021. (Photo by Kazuhiro Nogi/AFP Photo) 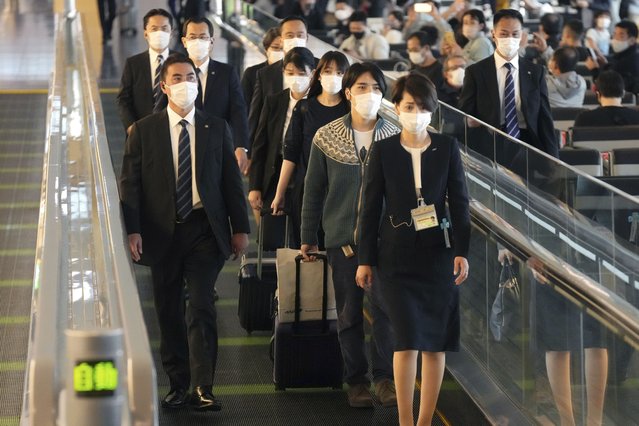 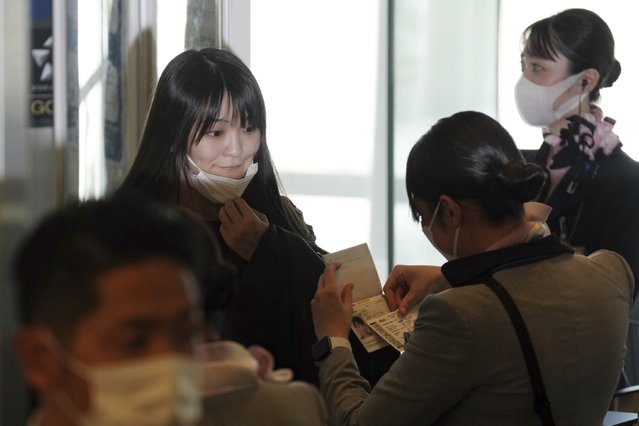 Japan's former Princess Mako, left, the elder daughter of Crown Prince Akishino, takes her mask off at a boarding gate to board an airplane to New York with her husband Kei Komuro, not in picture, Sunday, November 14, 2021, at Tokyo International Airport in Tokyo. (Photo by Eugene Hoshiko/AP Photo) 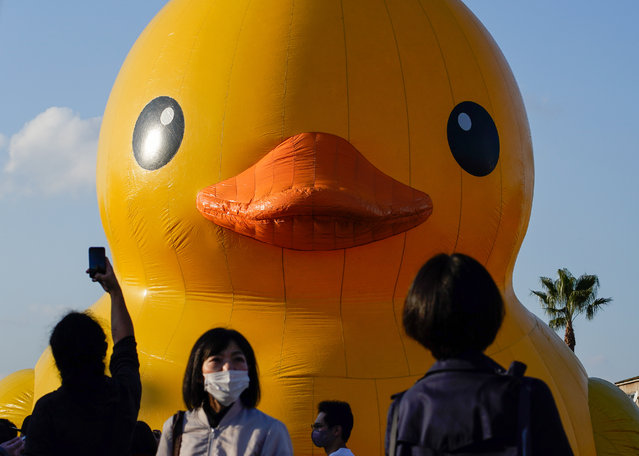 The “Rubber Duck” floating sculpture designed by Florentijn Hofman is seen displayed as a part of one day art event Suminoe Art Beat 2021 at the Creative Center Osaka on November 14, 2021 in Osaka, Japan. (Photo by Christopher Jue/Getty Images) 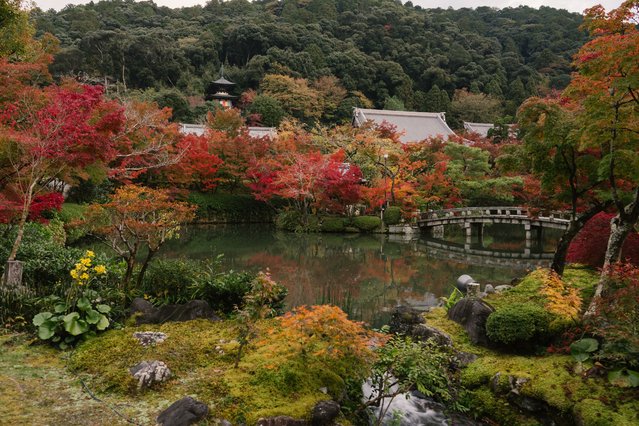 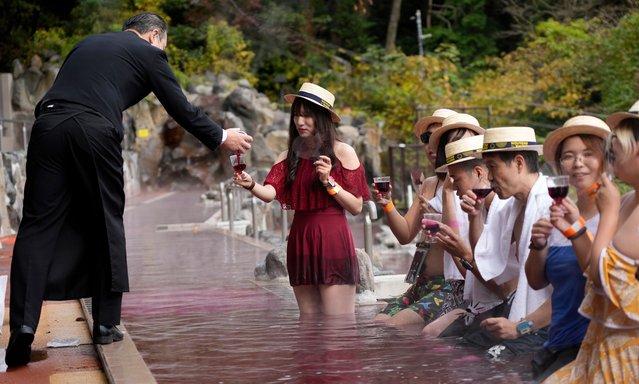 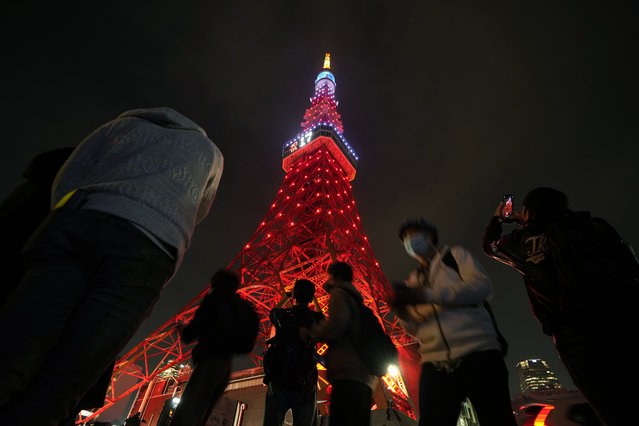 Bystanders take pictures of the Tokyo Tower as it is illuminated in colors of the Los Angeles Angels to celebrate Shohei Ohtani's MVP award in Tokyo, Friday, November 19, 2021. Ohtani was unanimously voted Major League Baseball's American League MVP for a two-way season not seen since Babe Ruth, and Bryce Harper earned the National League honor for the second time. (Photo by Hiro Komae/AP Photo) 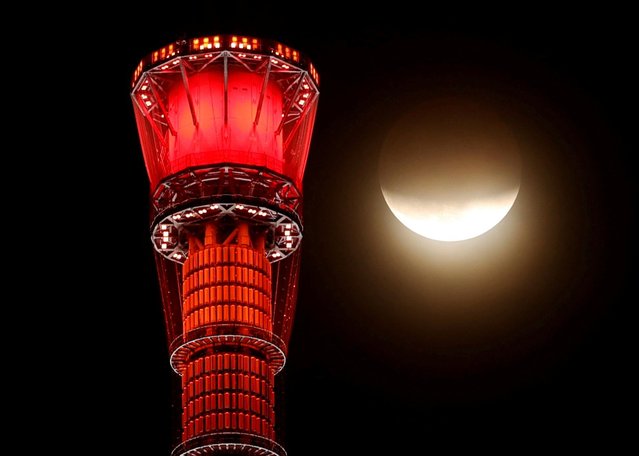