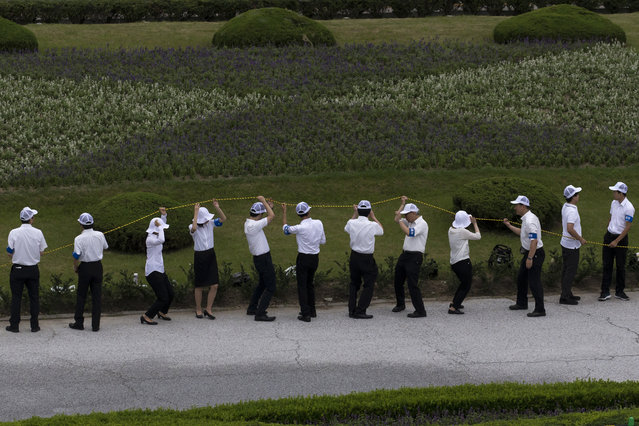 Staff members stand along a restricted area during the ceremony marking the 74th anniversary of the atomic bombing of Hiroshima at the Hiroshima Peace Memorial Park on August 6, 2019 in Hiroshima, Japan. Japan marks the 74th anniversary of the first atomic bomb that was dropped by the United States on Hiroshima on August 6, 1945. The bomb instantly killed an estimated 70,000 people and thousands more in coming years from radiation effects. Three days later the United States dropped a second atomic bomb on Nagasaki which ended World War II. According to media reports, Pope Francis plans to visit Hiroshima and Nagasaki later this year during his four-day stay in Japan in November to offer prayers for victims of the atomic bombings. (Photo by Tomohiro Ohsumi/Getty Images) 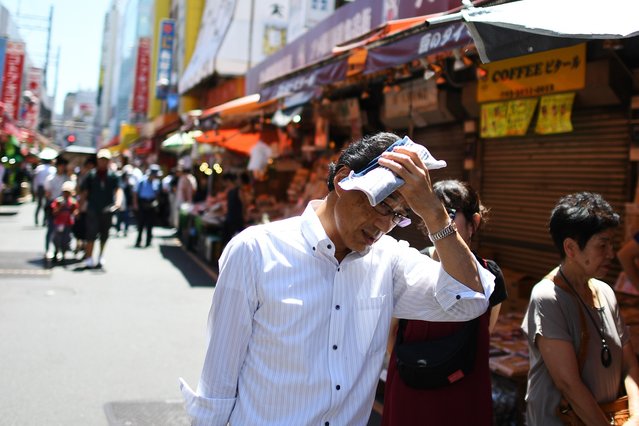 People walk in the street during a hot day in Tokyo's district of Ueno on August 7, 2019. (Photo by Charly Triballeau/AFP Photo) 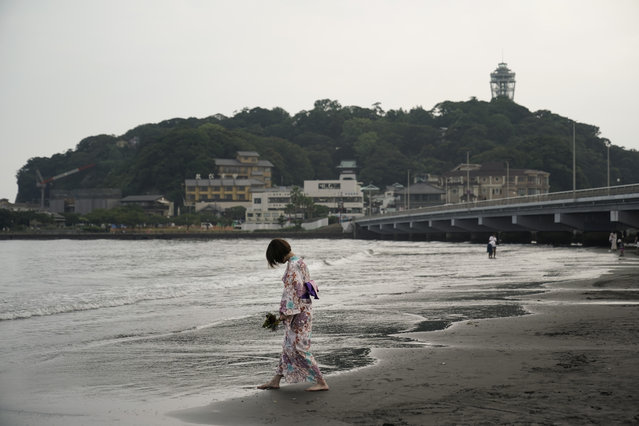 A woman wearing yukata strolls along the beach near Enoshima Island in Fujisawa, west of Tokyo, Thursday, Aug. 22, 2019. The island is set to host sailing events at the Tokyo 2020 Olympics. (Photo by Jae C. Hong/AP Photo) 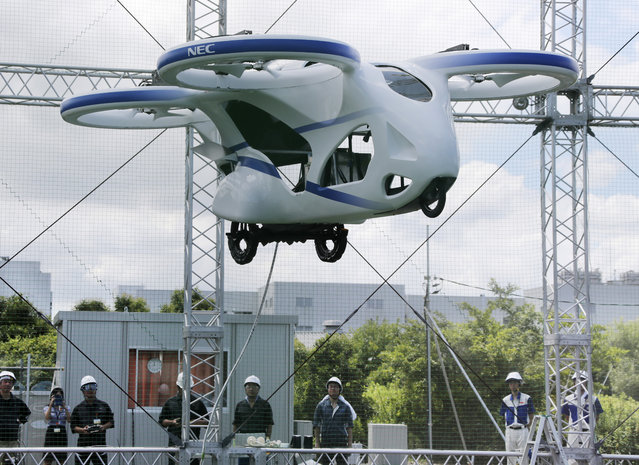 NEC Corp.'s machine with propellers hovers at the company's facility in Abiko near Tokyo, Monday, August 5, 2019. The Japanese electronics maker showed a “flying car”, a large drone-like machine with four propellers that hovered steadily for about a minute. (Photo by Koji Sasahara/AP Photo) 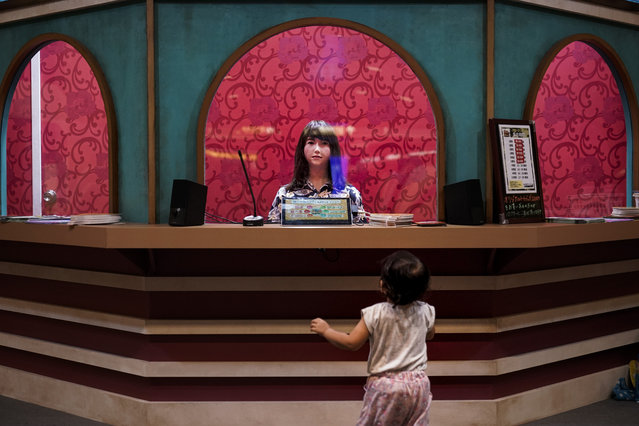 A baby girl looks at a humanoid robot sitting in a box office Friday, August 23, 2019, in Tokyo. (Photo by Jae C. Hong/AP Photo) 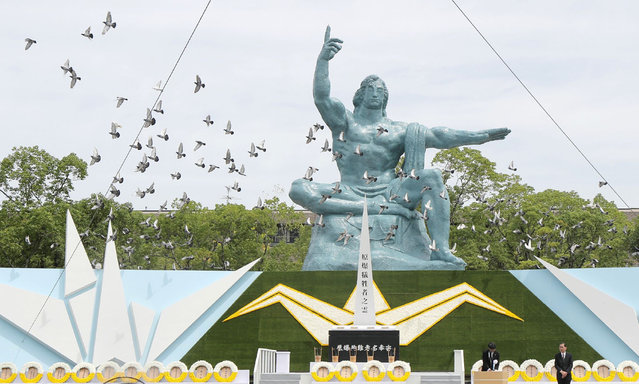 Doves fly around the Peace Statue during a memorial service to mark the 74th anniversary of the atomic bombing at the Peace Memorial Park in Nagasaki on August 9, 2019. (Photo by JIJI Press/AFP Photo) 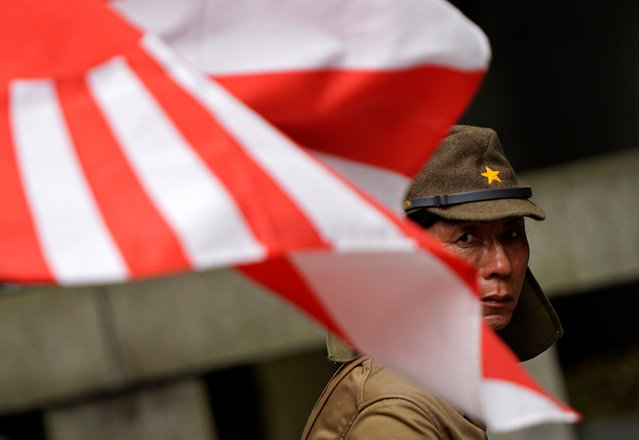 A man dressed as an Imperial army soldier stands behind the Rising Sun war flag at the controversial Yasukuni Shrine in Tokyo, Japan, 15 August 2019, the day of the 74th anniversary of the end of World War II. Some 3.1 million Japanese soldiers and civilians were killed during the war, almost 2.5 million of whom are enshrined at Yasukuni, including convicted WWII war criminals. (Photo by Franck Robichon/EPA/EFE) 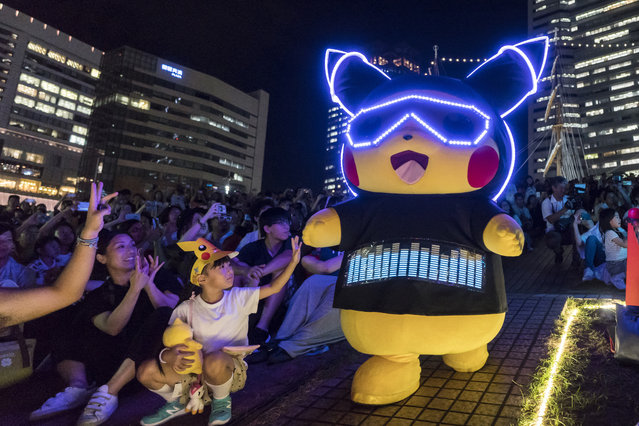 A performer dressed as Pikachu, a character from the Pokémon media franchise managed by The Pokémon Company, marches during the Pikachu Outbreak event at night on August 8, 2019 in Yokohama, Japan. A total of 2,000 Pikachus appear at the city's landmarks in the Minato Mirai area aiming to attract visitors and tourists to the city. The event will be held through August 12. (Photo by Tomohiro Ohsumi/Getty Images) 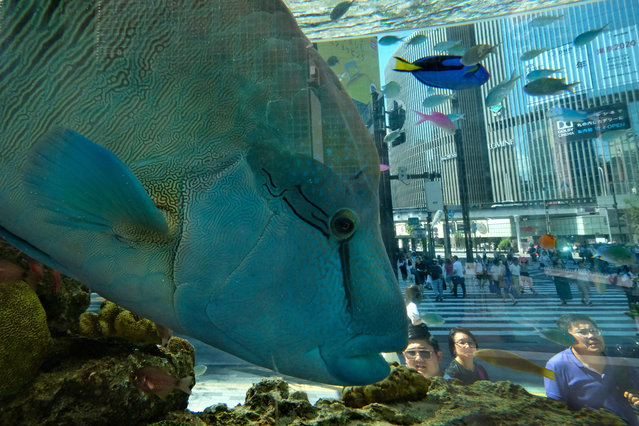 Listed as endangered on the IUCN red list of threatened species, a humphead wrasse, or Napoleon fish, swims in an aquarium during an event in Tokyo's shopping district of Ginza on August 5, 2019. (Photo by Kazuhiro Nogi/AFP Photo) 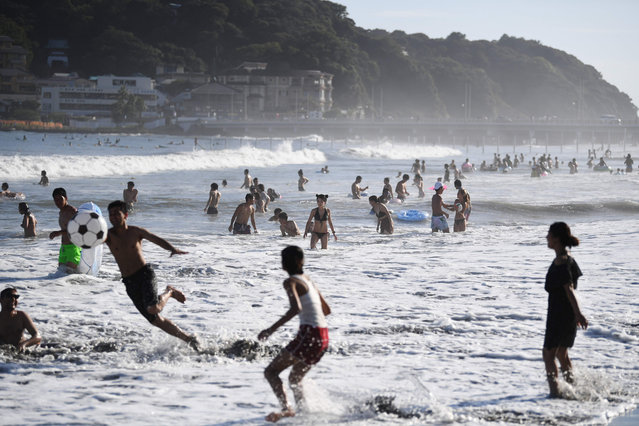 People enjoy the beach near Enoshima Island (in background) on the coast of Kanagawa prefecture, southwest of Tokyo, on August 13, 2019. (Photo by Charly Triballeau/AFP Photo) 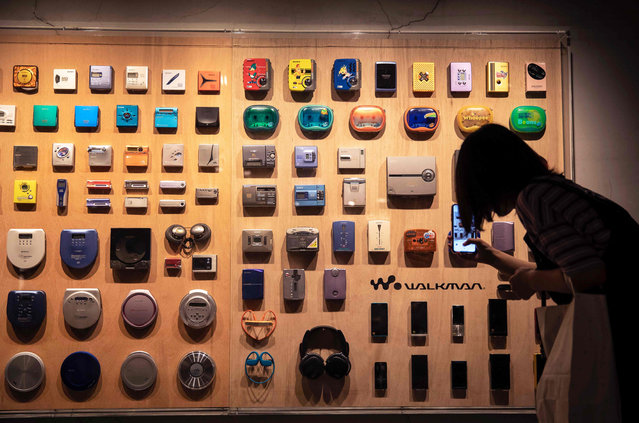 In this picture taken on July 10, 2019, various models of Sony Walkman audio players are displayed at an exhibition marking the 40th anniversary of the iconic device, in Tokyo. Must-have 80s gadget and one-time icon of Japan electronics cool, Sony's Walkman turned 40 this year and like its now middle-aged fans, is clinging to its youth with high-tech updates. (Photo by Behrouz Mehri/AFP Photo) 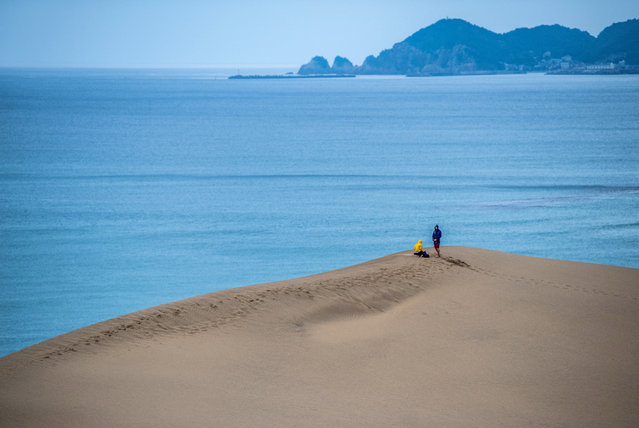 People visit Tottori Sand Dunes on August 27, 2019 in Tottori, Japan. The Tottori Sand Dunes form the only large dune system in Japan and were created by sediment deposits carried by the Sendai River into the Sea of Japan. Sea currents and wind brought the sand from the sea floor to the shore, where the wind constantly rearranges the shape. The dunes have existed for over 100,000 years but are now decreasing due to a post-war government reforestation program and concrete barriers erected to protect the coast from tsunamis which have disrupted the currents responsible for bringing the sand to shore. Although authorities have begun measures to protect the dunes, including dumping sand off the shore in the hope that it will wash ashore, as well as employing the manual removal of encroaching grassy areas, the result is as yet unclear. (Photo by Carl Court/Getty Images) 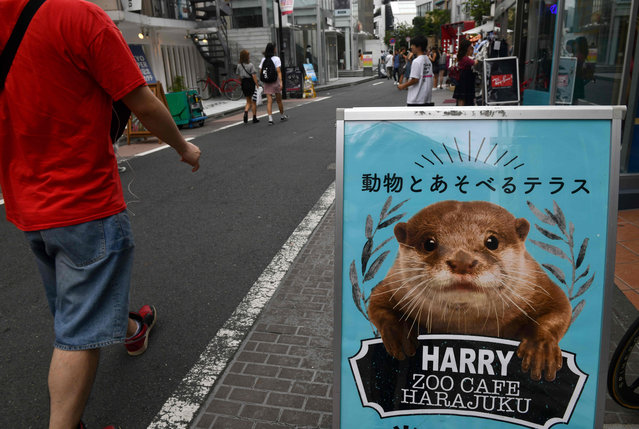 A promotional signboard for a pet cafe that features otters is displayed at the Harajuku district in Tokyo on August 21, 2019. Social media are fuelling a burgeoning appetite for acquiring wild otters and other endangered animals as pets, conservationists say, warning that the trend could drive species extinct. (Photo by Toshifumi Kitamura/AFP Photo) 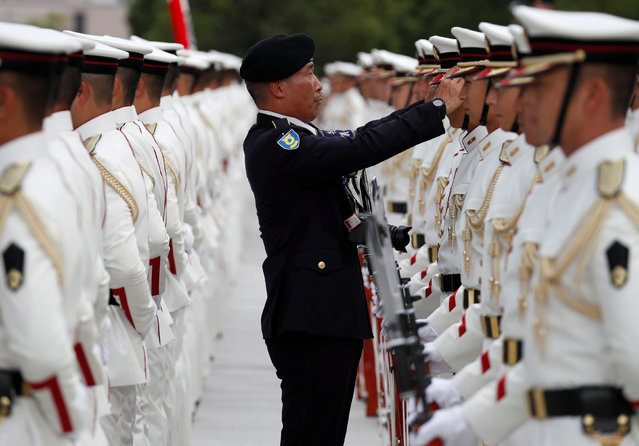 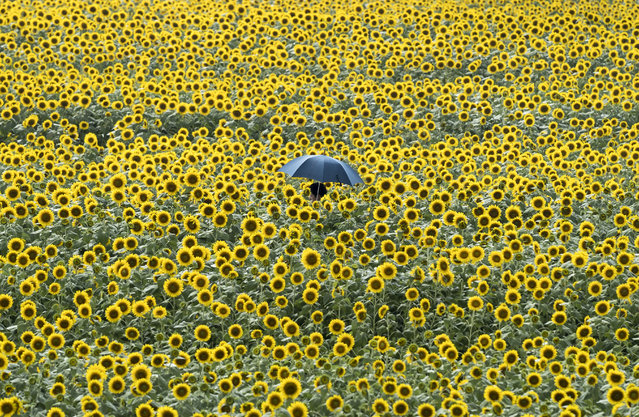