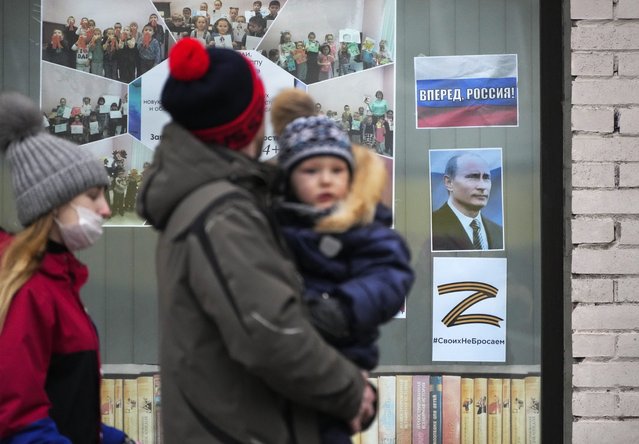 A family walk past a portrait of Russian President Vladimir Putin, a sign reading “Go Russia!” and the letter Z, which has become a symbol of the Russian military, displayed in the window of a children's library in St. Petersburg, Russia, Friday, March 11, 2022. (Photo by AP Photo, File) 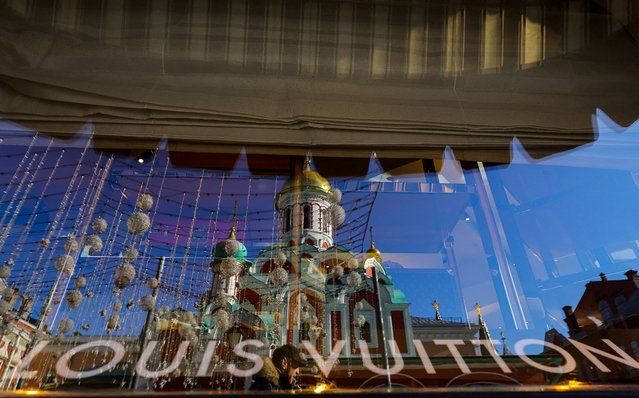 A church is reflected in a window of a closed Louis Vuitton boutique in the GUM department store in Moscow, Russia on March 15, 2022. (Photo by Evgenia Novozhenina/Reuters) 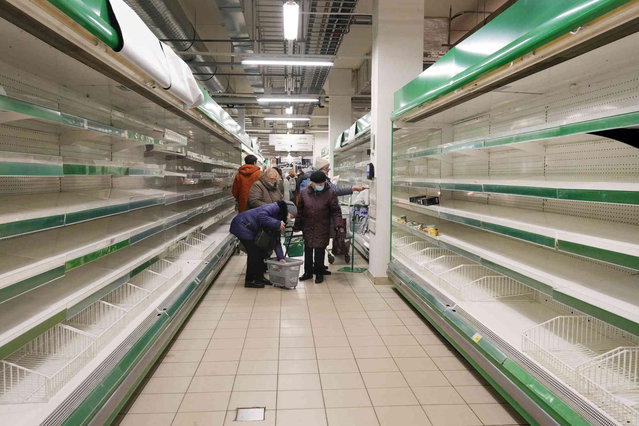 People buy the last remaining groceries at a Finnish PRISMA store as they know the store will close soon, in St. Petersburg, Russia, Tuesday, March 15, 2022. The Finnish holding company S-Group has decided to curtail all operations in Russia. The company operates sixteen PRISMA supermarkets and three SOKOS hotels in St. Petersburg. (Photo by AP Photo/Stringer) 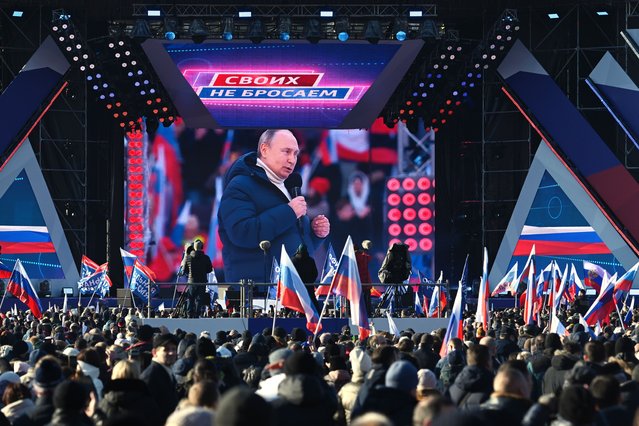 A screen shows Russian President Vladimir Putin delivering a speech during a concert marking the 8th anniversary of Crimea's reunification with Russia at the Luzhniki stadium in Moscow, Russia, 18 March 2022. Russia in 2014 annexed the Black Sea peninsula, shortly after Crimeans voted in a disputed referendum to secede from Ukraine. (Photo by Vladimir Astapkovich/Sputnik/Pool/EPA/EFE) 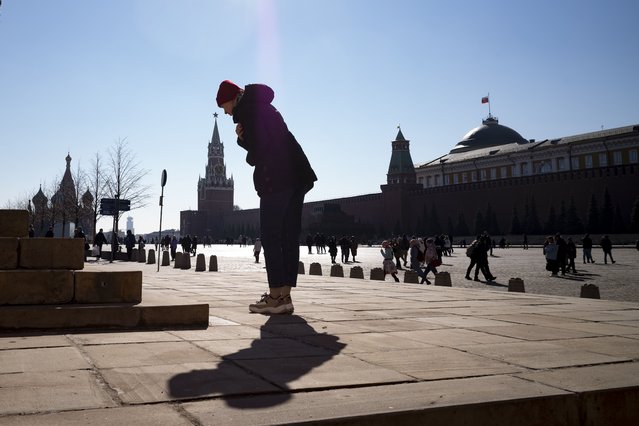 A woman crosses herself in front of Church of Our Lady of Kazan in Red Square with the St. Basil's Cathedral, left, and the Spasskaya Tower, second left, and the Kremlin Wall in the background, in Moscow, Russia, Sunday, March 20, 2022. (Photo by AP Photo/Stringer) 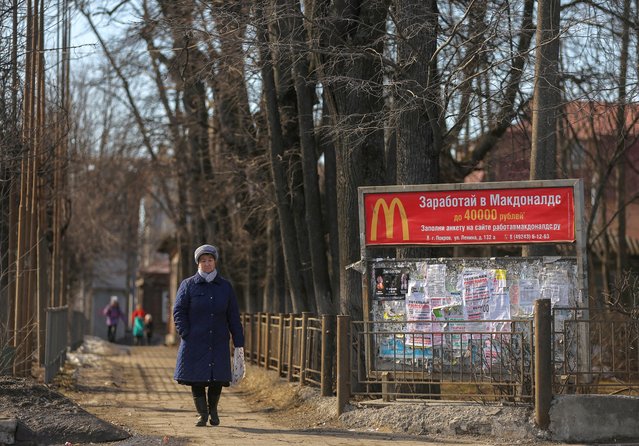 A woman walks along a street past a banner offering job at McDonald's in the town of Pokrov in Vladimir Region, Russia on March 21, 2022. (Photo by Evgenia Novozhenina/Reuters) 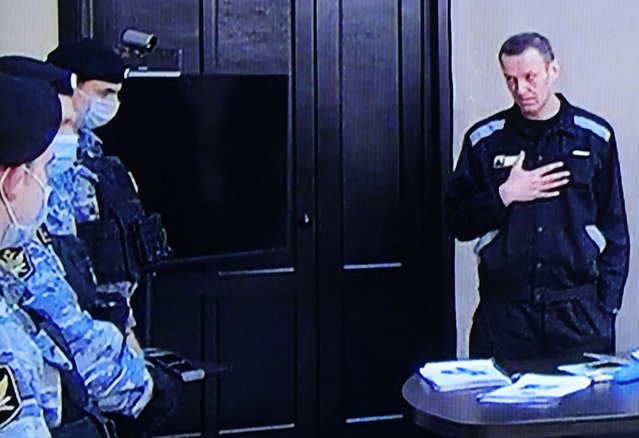 Russian opposition leader Alexei Navalny, accused of fraud and contempt of court, is seen on a screen via a video link during a court hearing at the IK-2 corrective penal colony in the town of Pokrov in Vladimir Region, Russia March 22, 2022. Navalny is already serving a two-and-a-half year sentence at a prison camp east of Moscow for parole violations. (Photo by Evgenia Novozhenina/Reuters) 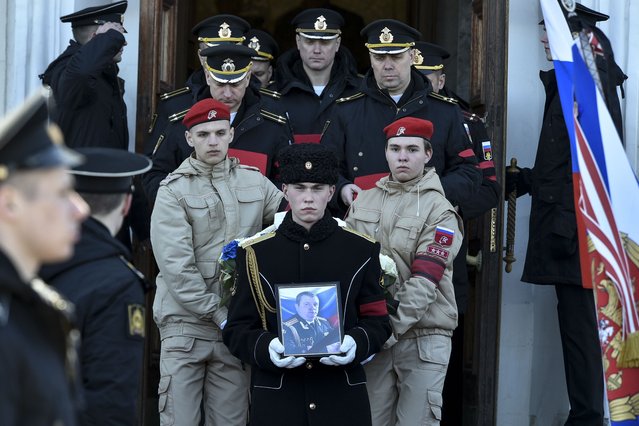 A serviceman carries the photo of Capt. Andrei Paliy, a deputy commander of Russia's Black Sea Fleet, during a farewell ceremony in Sevastopol, Crimea, Wednesday, March 23, 2022. Paliy was killed in action during fighting with Ukrainian forces in the Sea of Azov port of Mariupol. (Photo by AP Photo/Stringer) 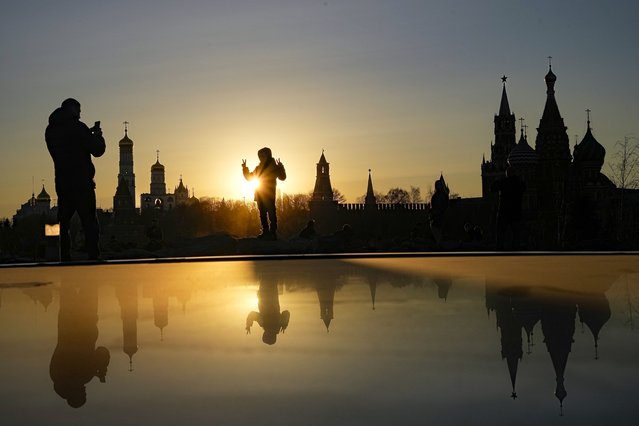 A woman poses for a photo during sunset over the Kremlin at Zaryadye Park near Red Square in Moscow, Russia, Wednesday, March 23, 2022. (Photo by AP Photo/Stringer) 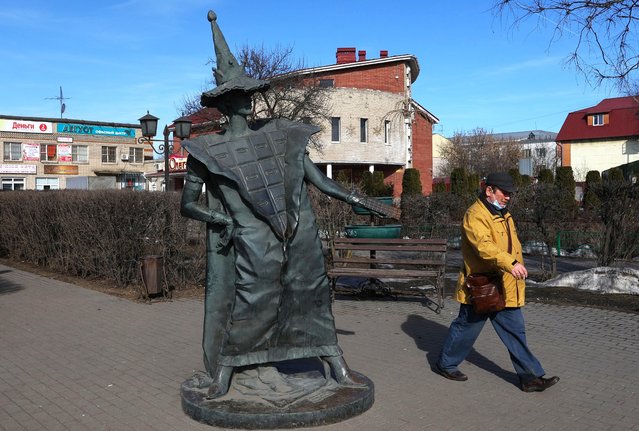 A man walks past the statue “Chocolate fairy” in the town of Pokrov in Vladimir Region, Russia March 21, 2022. (Photo by Evgenia Novozhenina/Reuters) 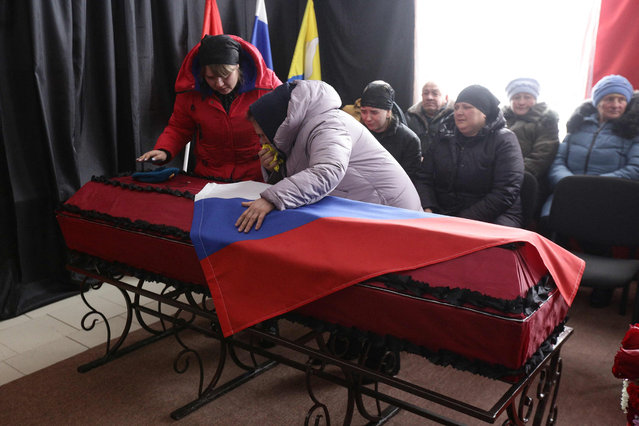 People attend a farewell ceremony for Sergei Sokolov, the 21 year-old serviceman who was killed during Russian military action in Ukraine, in the settlement of Zubkovo in Novosibirsk region on March 24, 2022. (Photo by Rostislav Netisov/AFP Photo) 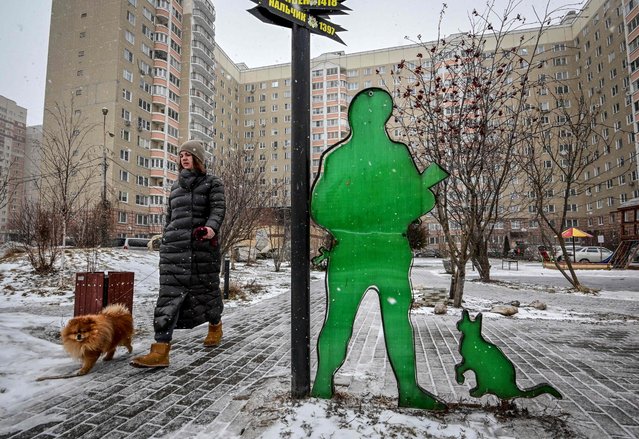 A woman walks a dog past the so-called “people's installation to a Russian soldier” nicknamed the “polite people” created by residents in the backyard of their apartment building in the town of Podolsk, outside Moscow, on March 28, 2022. (Photo by Yuri Kadobnov/AFP Photo) 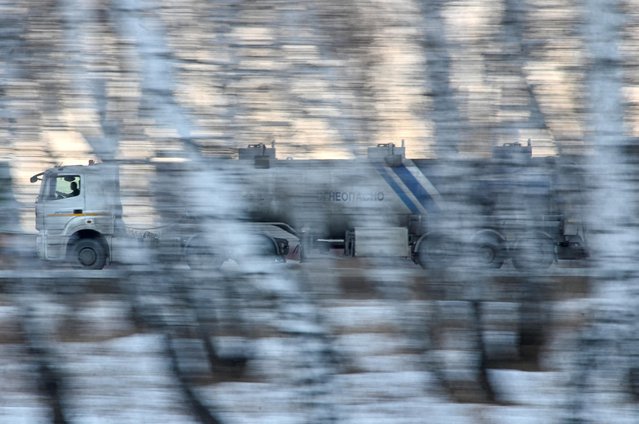 An oil tank truck drives past trees along a road in Omsk, Russia on March 28, 2022. A sign on the truck reads: “Flammable”. (Photo by Alexey Malgavko/Reuters) 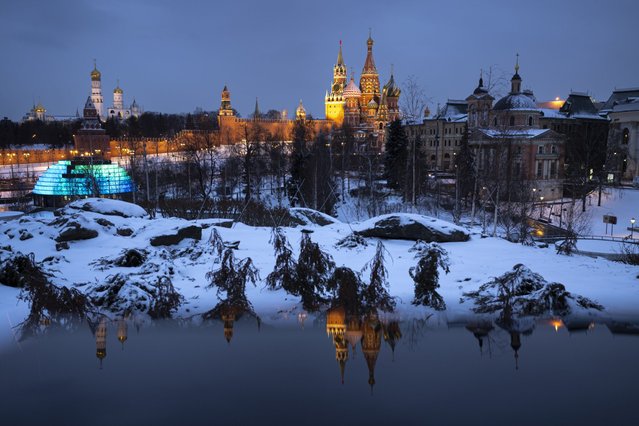 The Kremlin is seen after sunset from Zaryadye Park near Red Square in Moscow, Russia, Monday, March 28, 2022. (Photo by AP Photo/Stringer) 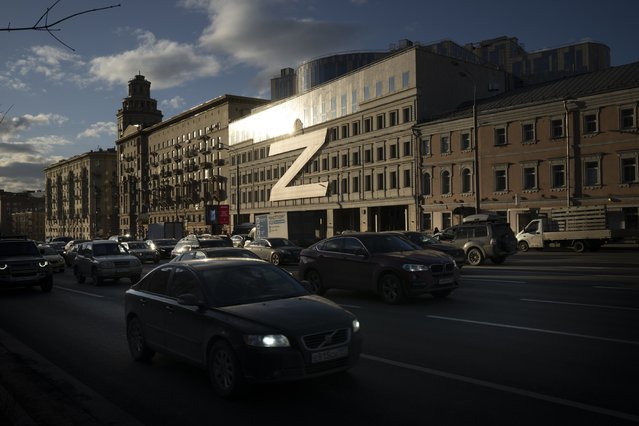 Cars drive a street with a huge letter Z, which has become a symbol of the Russian military, and a hashtag reading “We don't abandon our own” on a building during sunset in Moscow, Russia, Wednesday, March 30, 2022. (Photo by AP Photo/Stringer) 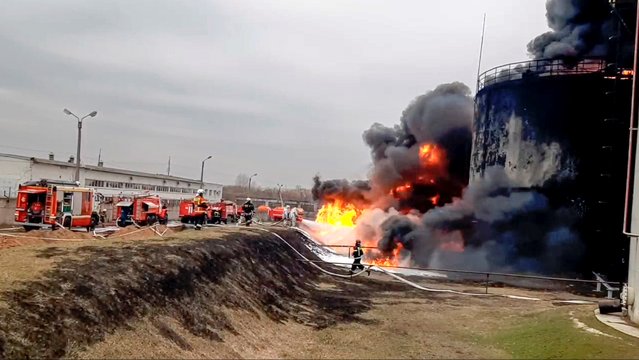 In this handout photo released by Russian Emergency Ministry Press Service on Friday, April 1, 2022, firefighters work at the site of fire at an oil depot in Belgorod region, Russia. The governor of the Russian border region of Belgorod accused Ukraine of flying helicopter gunships into Russian territory and striking an oil depot Friday morning. The depot is run by Russian energy giant Roseneft about 21 miles from the border. The governor says it was set ablaze by the attack that left two people injured. If confirmed, it would be the first attack of its kind by Ukrainian forces inside Russia. (Photo by Russian Emergency Ministry Press Service via AP Photo) 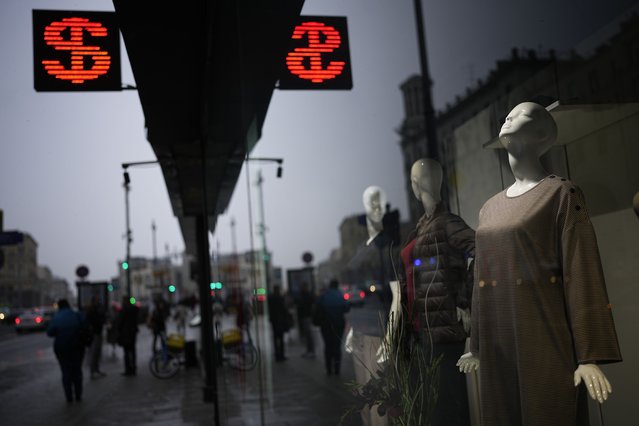 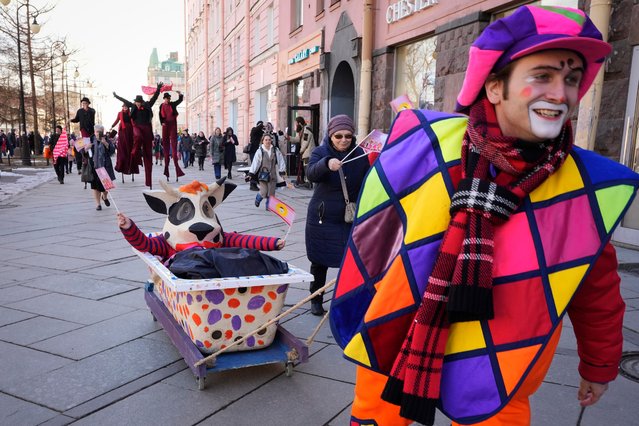 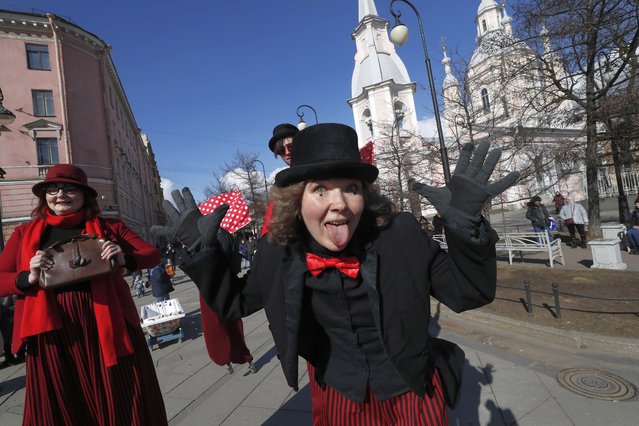