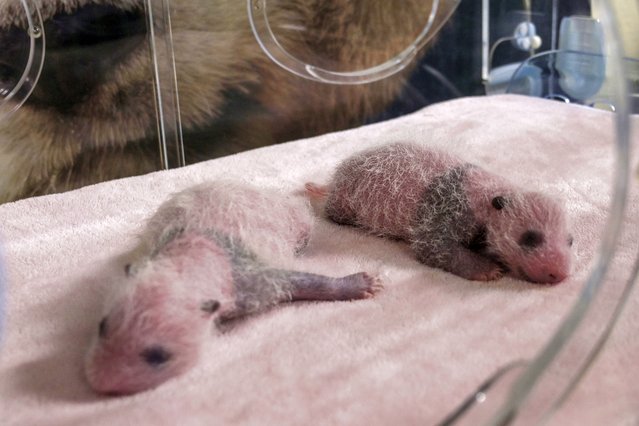 The two panda cub twins named Fleur de Coton (L) and Petite Neige (R) sleep inside an incubator at The Beauval Zoo in Saint-Aignan-sur-Cher, central France on August 13, 2021. The two cubs were born on August 2, 2021, and now weight 310 grams and 296 grams. (Photo by Guillaume Souvant/AFP Photo) 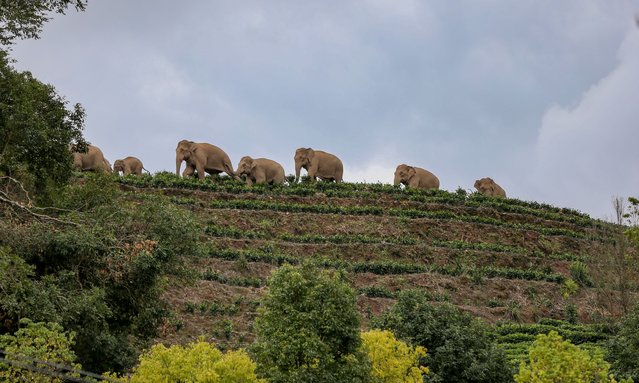 A herd of wild Asian elephants strolls through a village at Ning'er Hani and Yi Autonomous County on August 7, 2021 in Pu'er, Yunnan Province of China. (Photo by VCG/VCG via Getty Images) 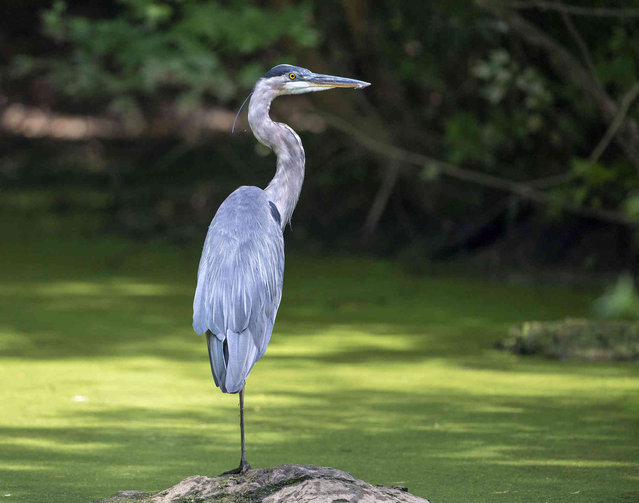 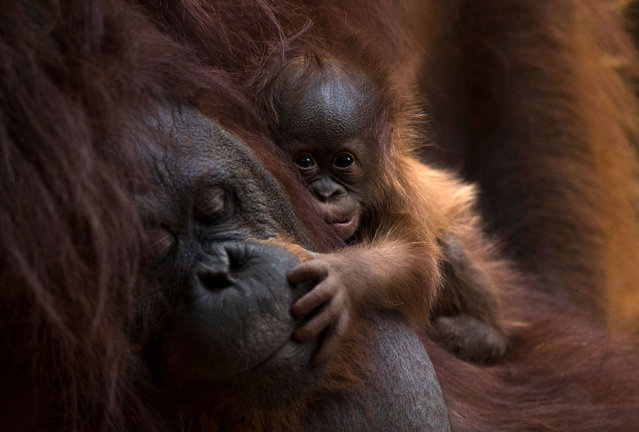 A Bornean orangutan called Suli holds its newborn baby at their enclosure at the Bioparc zoological park in Fuengirola on August 12, 2021. (Photo by Jorge Guerrero/AFP Photo) 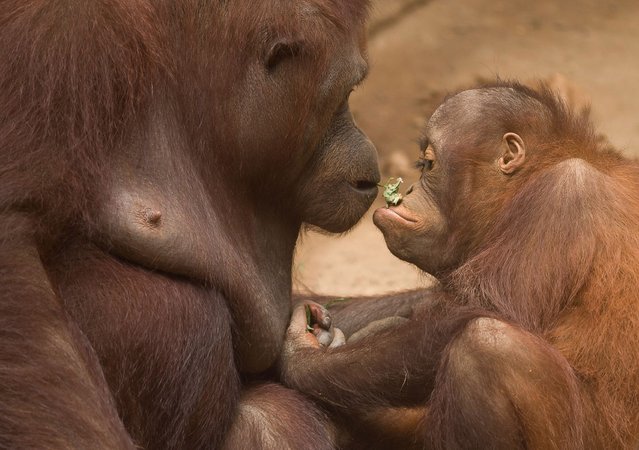 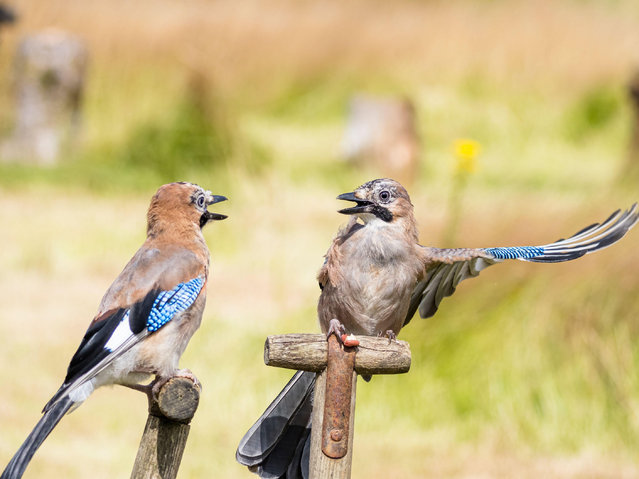 A small family of Jays perched on garden tools in Aberystwyth, Wales on August 8, 2021. (Photo by Philip Jones/Alamy Live News) 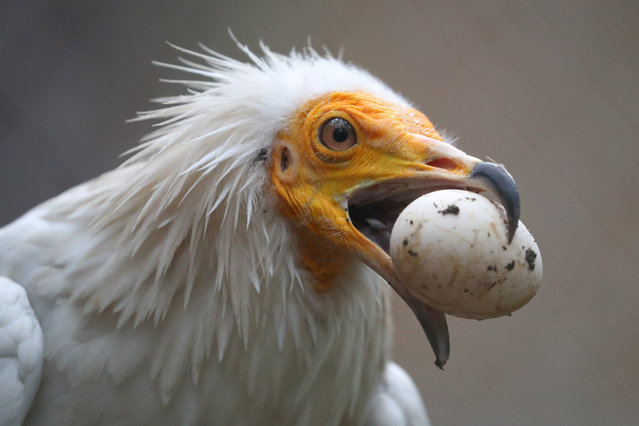 A vulture feeds at the Holzan rehabilitation and monitoring centre for birds of prey in the village of Kashino, some 45km southeast of Yekaterinburg in Sverdlovsk Region, Russia on August 6, 2021. Founded in 2003 and occupying 2.5ha of forest area, the centre keeps about 200 birds on a permanent basis, mostly those incapable of surviving on their own and requiring care. (Photo by Donat Sorokin/TASS) 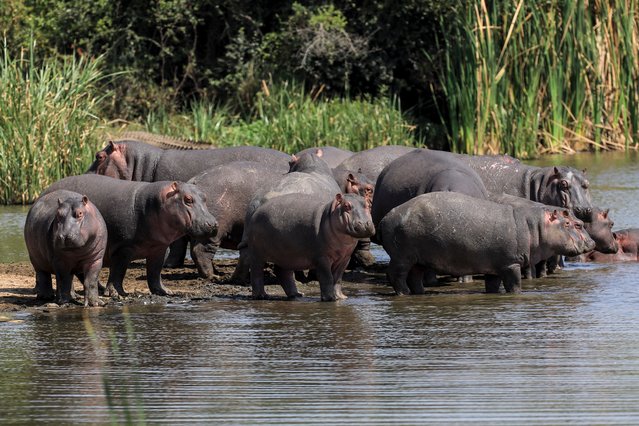 A bloat of hippos bask in the sun at the Nanglomoni dam, inside the Nairobi National Park in Nairobi, Kenya, 10 August 2021. (Photo by Daniel Irungu/EPA/EFE) 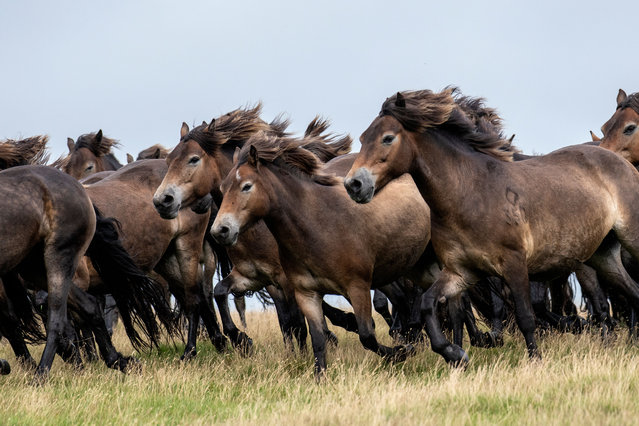 The annual gathering of the Tippbalake herd of Exmoor ponies at Brendon Common, United Kingdom on August 8, 2021. The ponies roam free on Exmoor and are rounded up once a year for health checks. (Photo by Rex Features/Shutterstock) 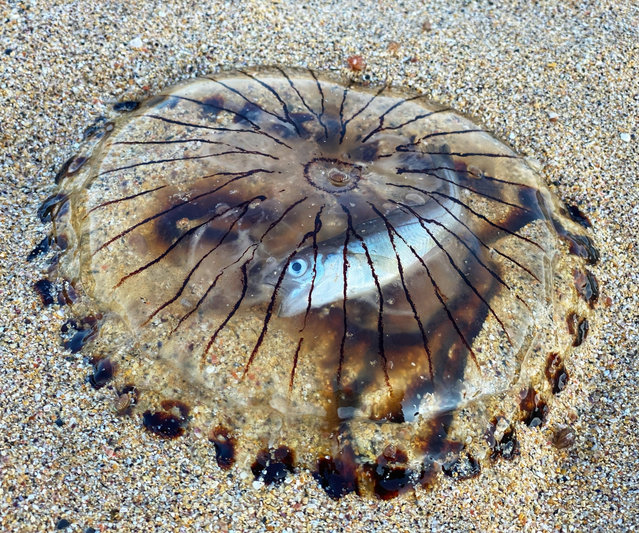 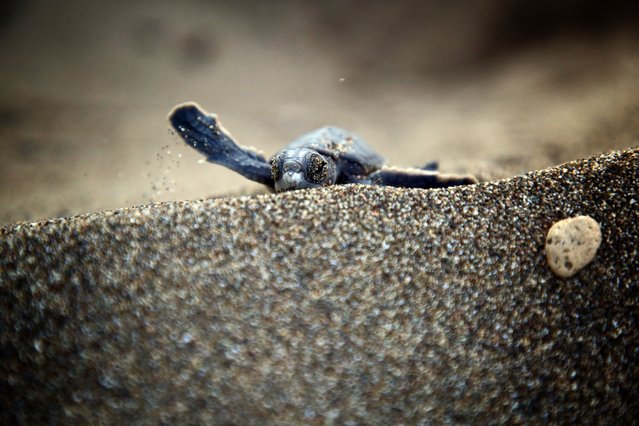 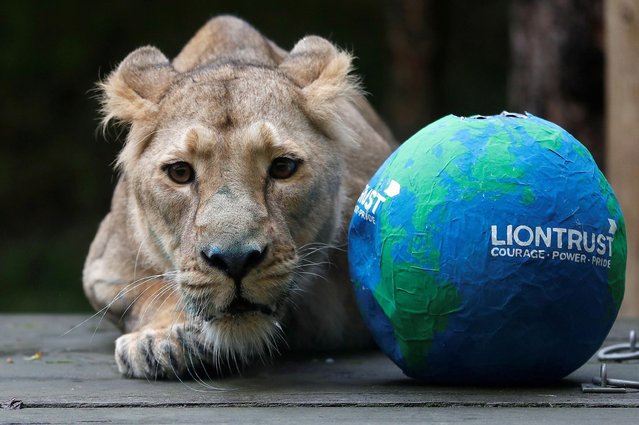 Arya, the Asiatic lioness is seen during a photo-opportunity to mark World Lion Day at ZSL London Zoo in London, Britain, August 9, 2021. (Photo by Peter Nicholls/Reuters) 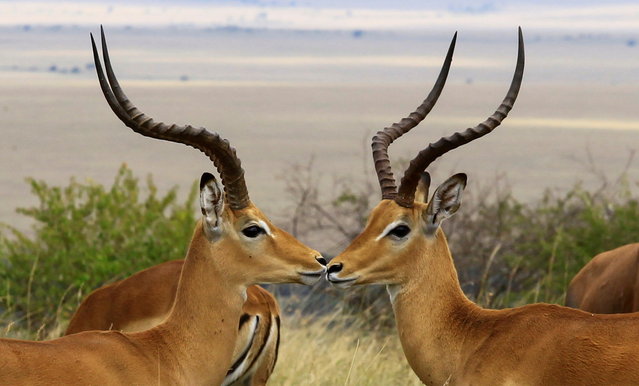 Antelopes are seen at the Maasai Mara National Reserve in Narok County, Kenya on July 16, 2021. (Photo by Monicah Mwangi/Reuters) 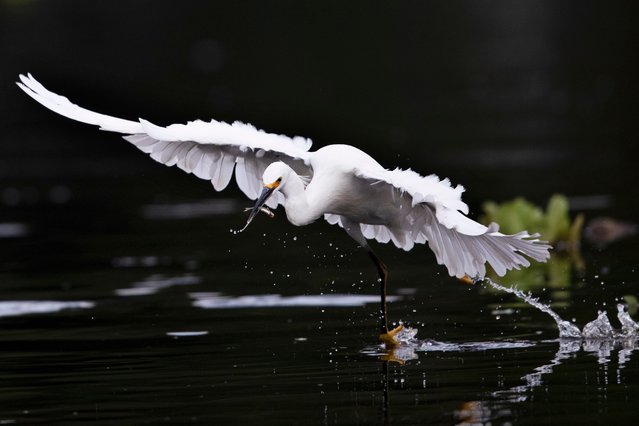 An egret catches a fish in the canals of Xochimilco, Mexico City, Thursday, August 12, 2021, as Mexico City prepares for the 500th anniversary of the fall of the Aztec capital of Tenochtitlan. The canals and floating gardens of Xochimilco are the last remnants of a vast water transport system built by the Aztecs to serve their capital of Tenochtitlán. (Photo by Marco Ugarte/AP Photo) 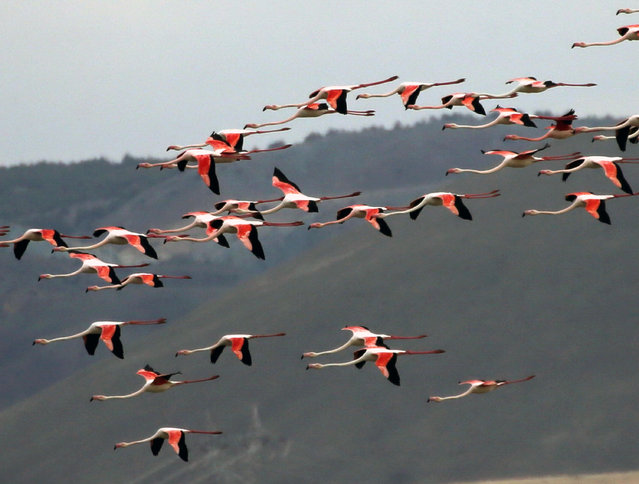 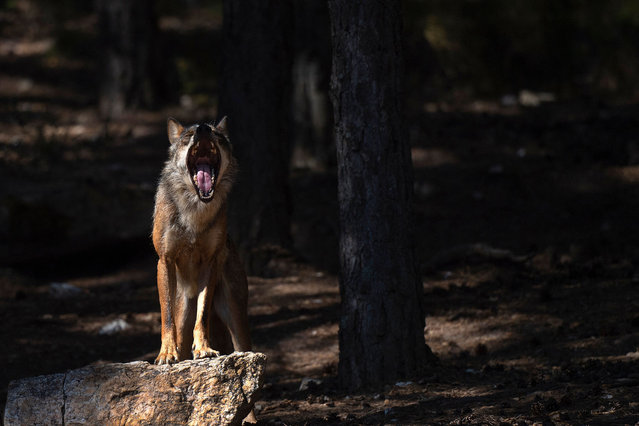 A wolf yawns at the Iberian Wolf Centre in the Sierra de la Culebra near the village of Puebla de Sanabria on July 28, 2021. Hunting wolves is due to be banned nationwide in Spain by the end of September, much to the delight of conservationists and the dismay of ranchers who worry the change will mean more attacks on their livestock. (Photo by Pierre-Philippe Marcou/AFP Photo) 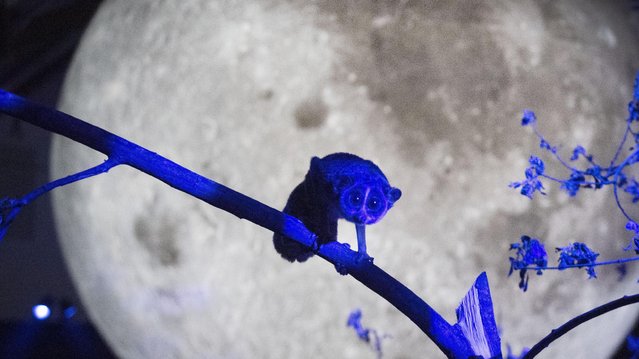 A loris perches under the replica of the moon by the artist Luke Jerram at Longleat safari park in Wiltshire. United Kingdom on August 12, 2021. The tiny creatures are endangered in the wild due to a loss of habitat and poaching and the park is looking after a male and female of the species in an indoor enclosure. (Photo by Zachary Culpin/BNPS) 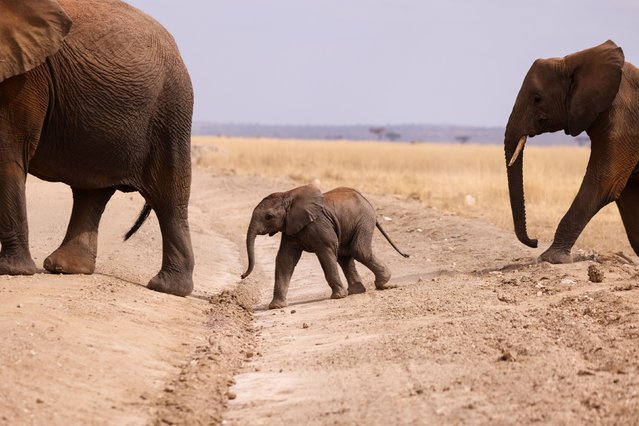 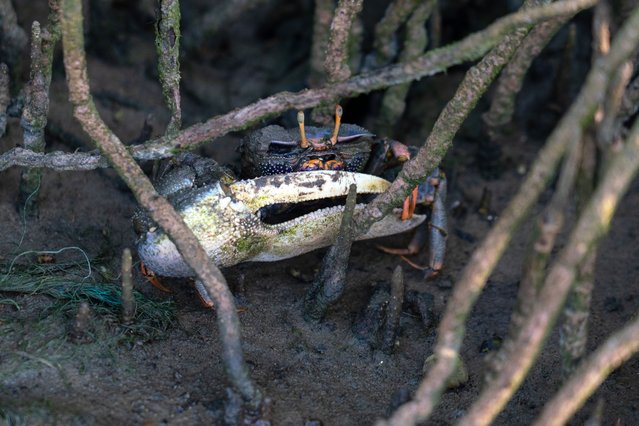 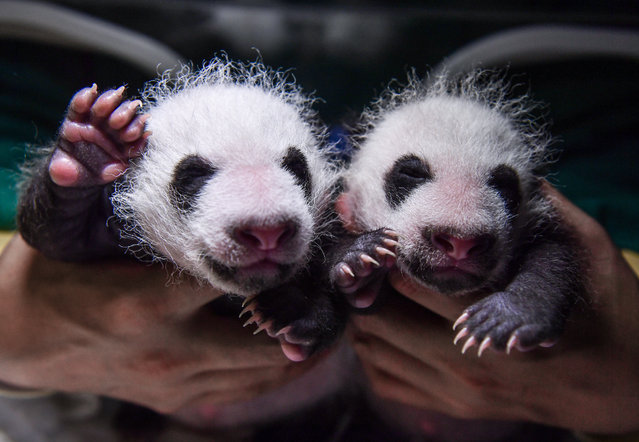