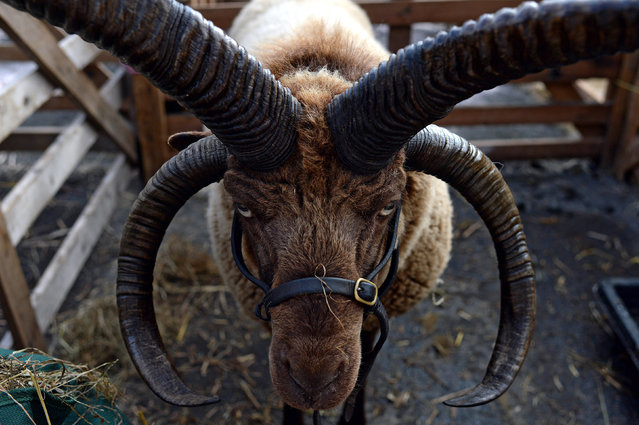 A close-up view of a Manx Loaghtan sheep in its pen during the 30th Masham Sheep Fair in Masham, Britain, September 27, 2015. The Fair attracts thousands of visitors over the weekend offering many different varietys of sheep from across Britain on sale. (Photo by Nigel Roddis/EPA) 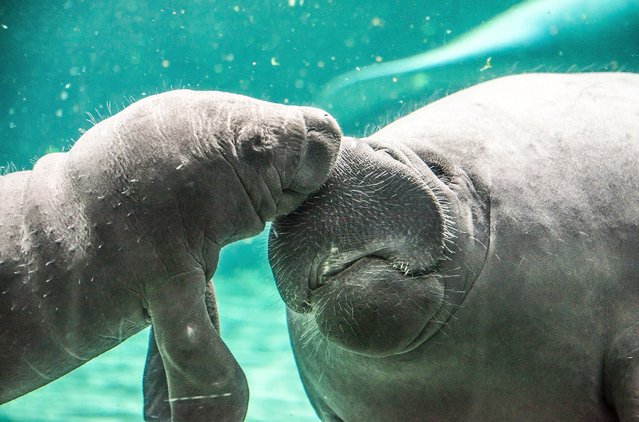 A baby manatee swims near its mother in one of the very first public appearances on October 1, 2015 in Genoa, Italy. The baby manatee is the only one in Italy and there are only 10 zoos in Europe with these herbivorous marine mammals. (Photo by Awakening/Getty Images) 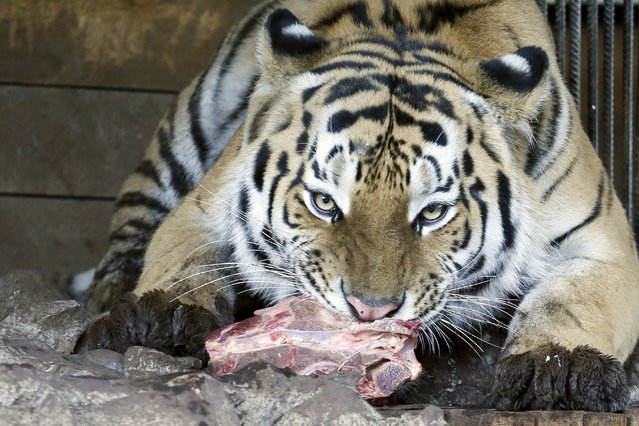 Bartek, a 2-year-old Amur tiger, eats a slab of meat inside his open-air cage as zoo keepers mark the upcoming Day of the Amur Tiger and the Far Eastern Leopard at the Royev Ruchey zoo in the suburbs of Krasnoyarsk, Siberia, September 25, 2015. The international day for the protection of Amur tigers and far eastern leopards will be celebrated at the zoo on September 26, according to zoo employees. (Photo by Ilya Naymushin/Reuters) 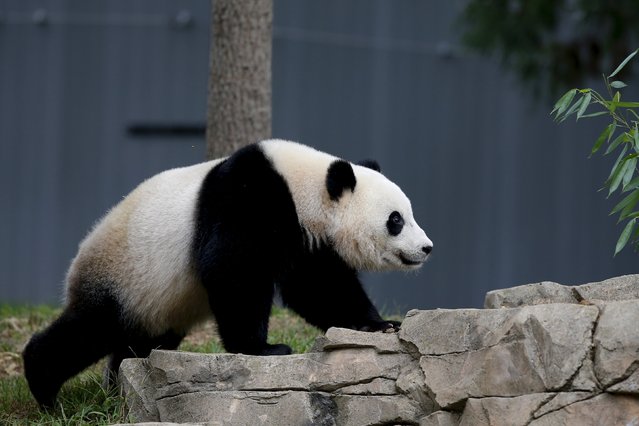 A panda is seen at the Smithsonian National Zoo in Washington September 25, 2015. (Photo by Carlos Barria/Reuters) 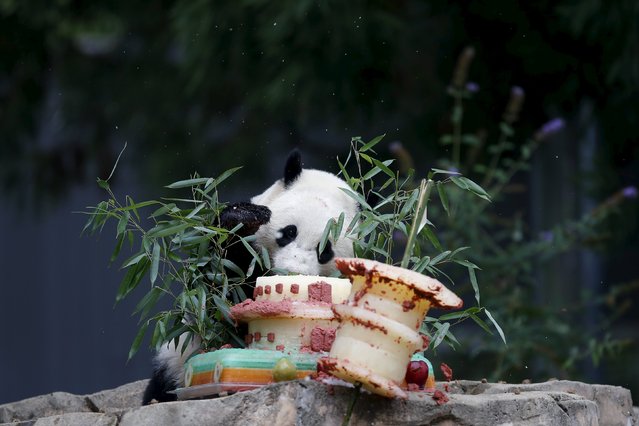 A panda plays with a special cake at the Smithsonian National Zoo in Washington September 25, 2015. (Photo by Carlos Barria/Reuters) 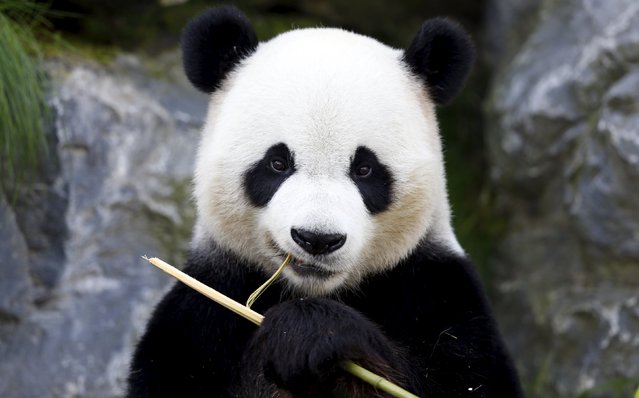 Xing Hui, a 6-year-old giant panda born in China, eats bamboo at the Pairi Daiza wildlife park in Brugelette, Belgium September 28, 2015. Belgian researchers are examining the excrements of giant pandas to understand how the bears can digest tough bamboo, hoping for clues on how to develop new generations of biofuel. (Photo by Francois Lenoir/Reuters) 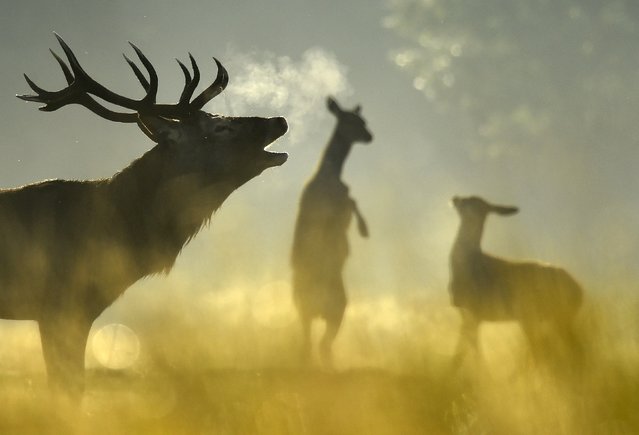 A Red deer stag barks, with females seen behind, in the morning sun in Richmond Park in west London, Britain, October 2, 2015. The Royal Park has had Red and Fallow deer present since 1529, and early autumn sees the rutting or breeding season begin amongst the herd of over six hundred animals. (Photo by Toby Melville/Reuters) 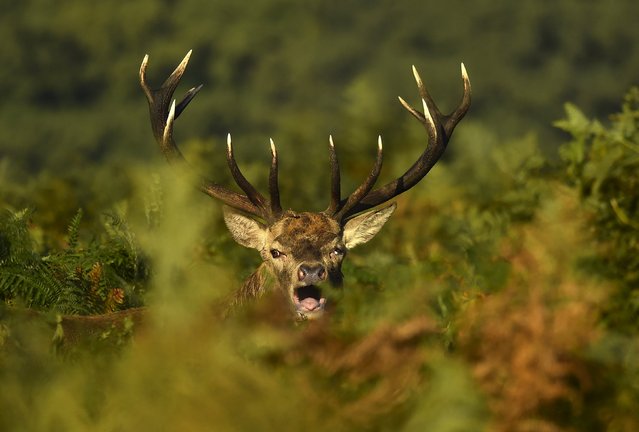 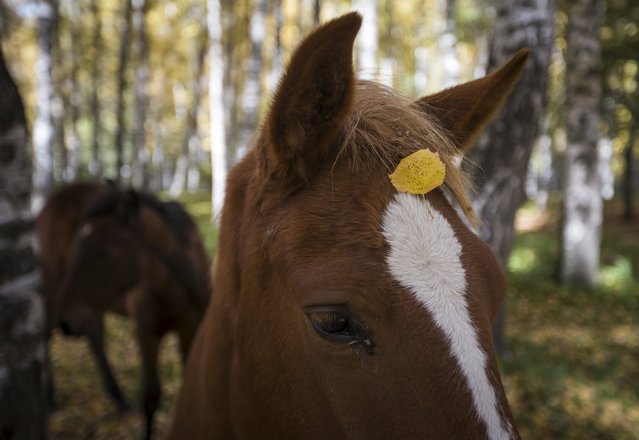 A leaf falls onto a horse's head during a sunny autumn day in a forest outside Almaty, Kazakhstan, October 2, 2015. (Photo by Shamil Zhumatov/Reuters) 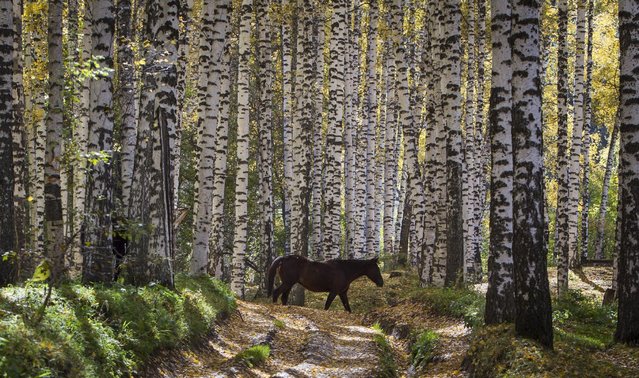 A horse walks during a sunny autumn day in a forest outside Almaty, Kazakhstan, October 2, 2015. (Photo by Shamil Zhumatov/Reuters) 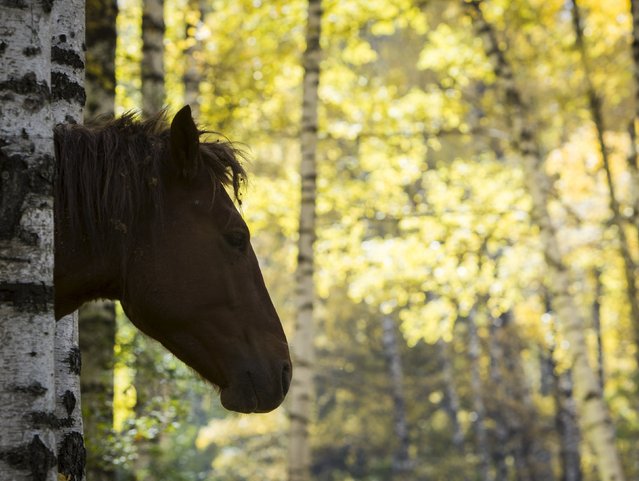 A horse grazes on a sunny autumn day in a forest outside Almaty, Kazakhstan, October 2, 2015. (Photo by Shamil Zhumatov/Reuters) 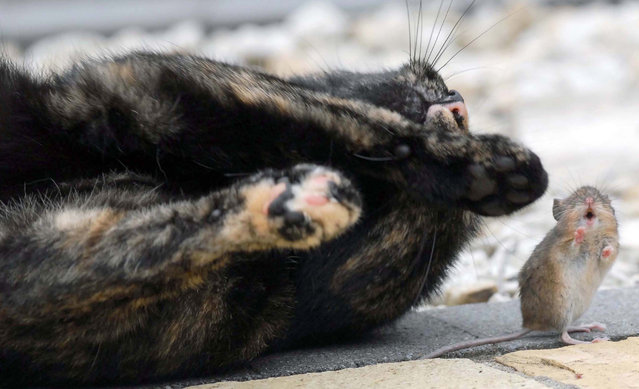 A cat and mouse play together in Westport, Ireland on October 1, 2015. (Photo by Paul Mealey/REX Shutterstock) 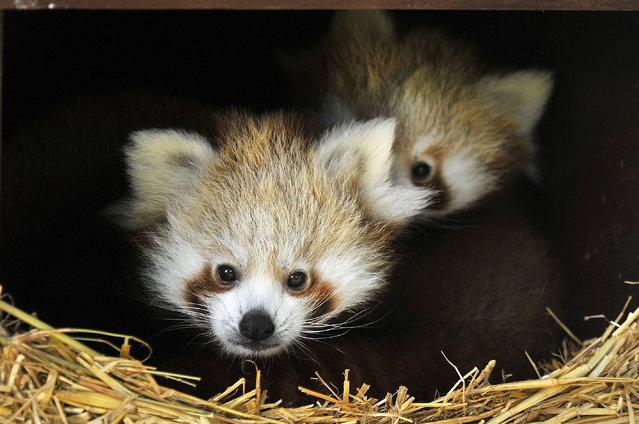 A red panda cub resting in its nest box is pictured at ZSL Whipsnade Zoo on September 27, 2015 in Whipsnade, England. The Cubs are called Bert and Ernie after the Sesame Street Characters and were born to mum Tashi on June 30, 2015 and have been hidden away in their nest box until now. (Photo by Tony Margiocchi/Barcroft Media) 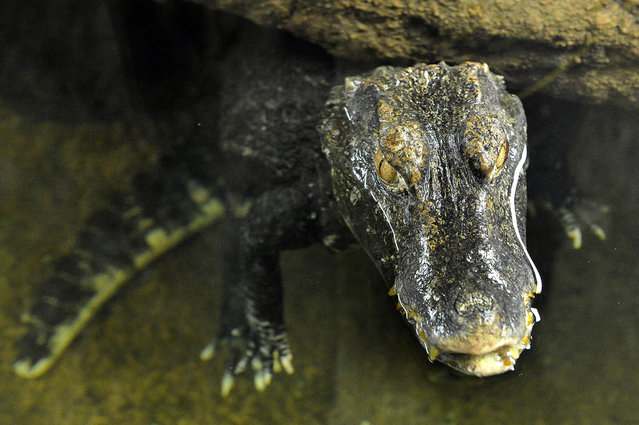 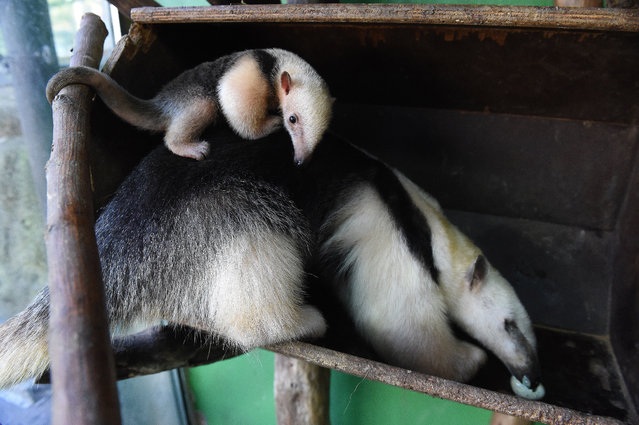 Southern tamandua female cub (Tamandua tetradactyla) is presented for the first time to public in the Zoo in Olomouc, Czech Republic, October 2, 2015. She was born three weeks ago. Olomouc zoo is the only one garden in the Czech Republic, in which the southern tamadua are successfully bred. (Photo by Ludek Perina/CTK via ZUMA Press) 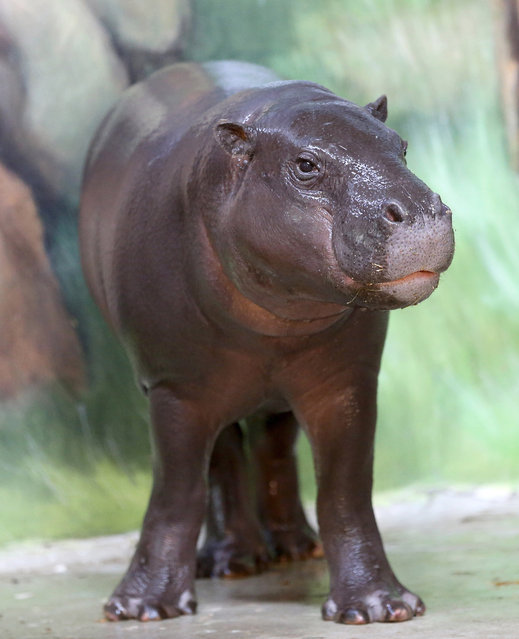 After the ceremonial opening of the new pygmy hippo facility at the zoo in Rostock the, one of the two hippos takes a bath, Rostock, Germany, 2 October 2015. The former elephant area has been rebuilt and modernized for the new facility. The pygmy hippo is an endangered species and is on the red list of endangered species. (Photo by Bernd WüStneck/DPA via ZUMA Press) 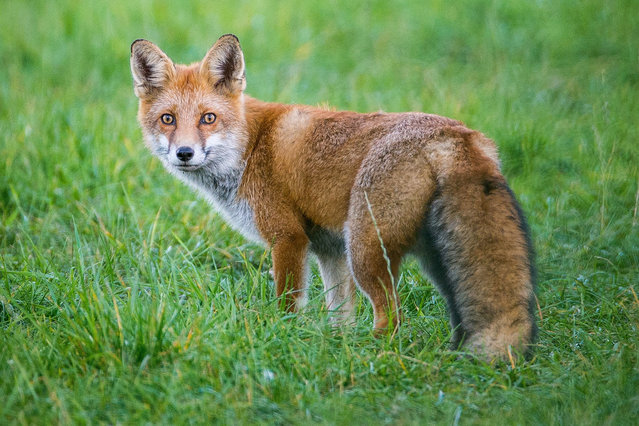 A fox stands on a meadow near Freesdorf, northeastern Germany, on September 29, 2015. (Photo by Patrick Pleul/AFP Photo/DPA) 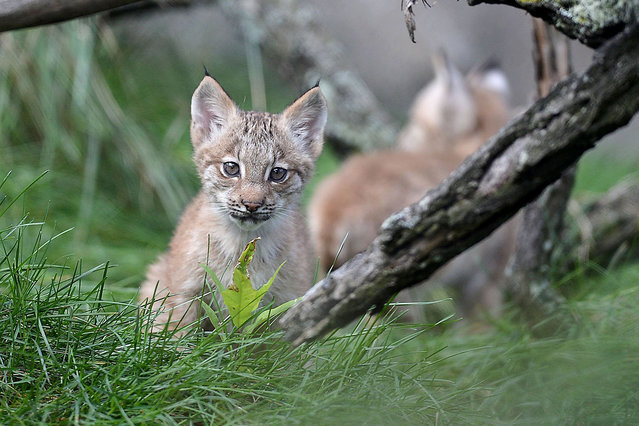 A lynx kitten plays in its enclosure on the first day the kittens were outside of their enclosed den and available for the public to see, Thursday, October 1, 2015, at the Erie Zoo, in Erie, Pa. Three kittens were born June 30, 2015 to mother Martina and father Russell, who will be introduced to the kittens in about a month, according to Scott Mitchell, executive director of the Erie Zoo. (Photo by Christopher Millette/Erie Times-News via AP Photo) 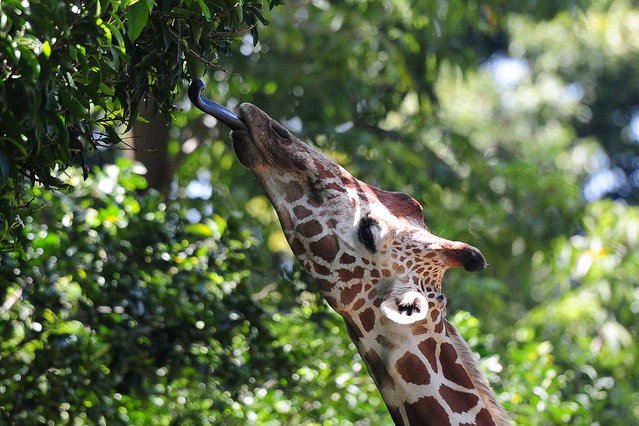 A giraffe eats a leaf at Sri Lanka's main zoo in Colombo on October 1, 2015. (Photo by Lakruwan Wanniarachchi/AFP Photo) 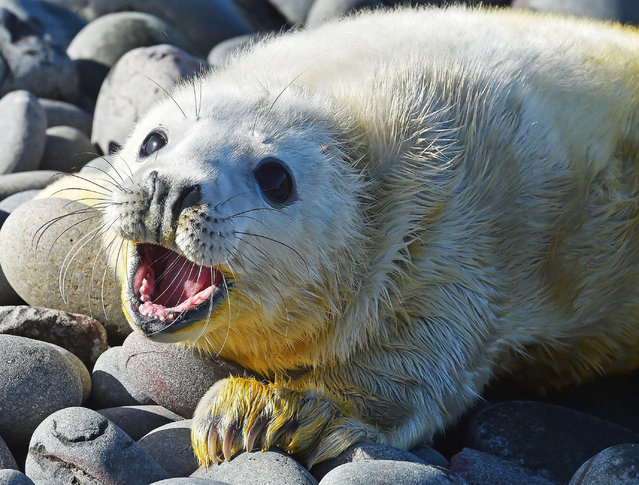 The first seal pup to be born this season at a major colony of grey seals on the Farne Islands sits beside its mother on Brownsman Island, England on September 30, 2015. (Photo by Owen Humphreys/PA Images) 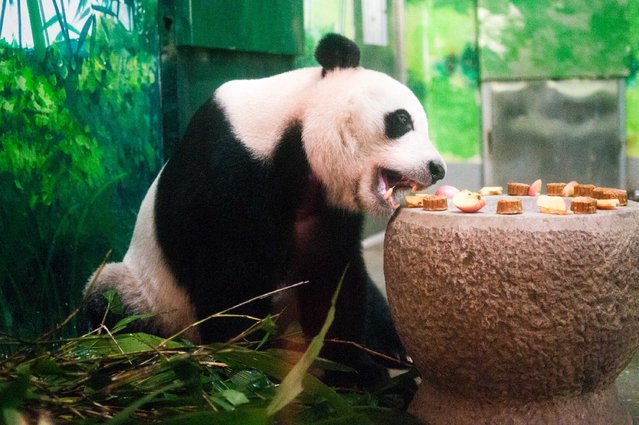 A giant panda eats mooncake-shaped fodder in a zoo in Liuzhou city, southwest China's Zhuang Autonomous Region, 27 September 2015. The Mid-autumn Festival, a traditional Chinese festival, fell on Sunday (28 September 2015) this year. Chinese people are accustomed to eating mooncakes to celebrate this festival. This year, zookeepers prepared mooncake-shaped fodder for giant pandas and other animals to enjoy the festival at zoos all over the county. (Photo by Imaginechina/Splash News) 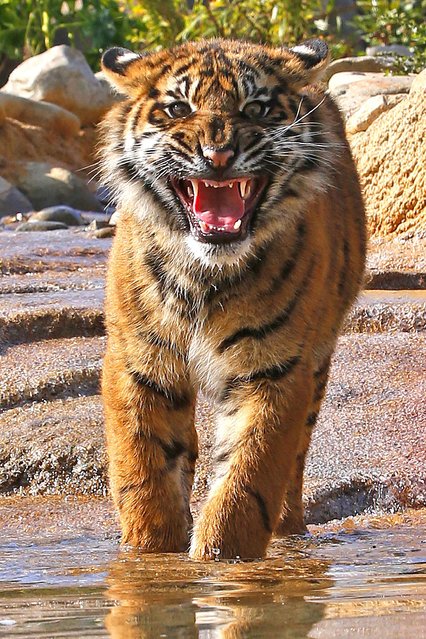