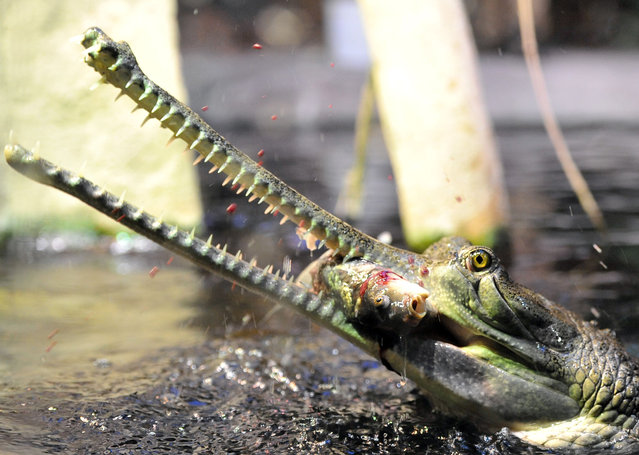 Lunchtime snack: a gavial eating a carp at Prague Zoo in Prague, Czech Republic on 11 May 2016. (Photo by Slavek Ruta/Rex Features/Shutterstock) 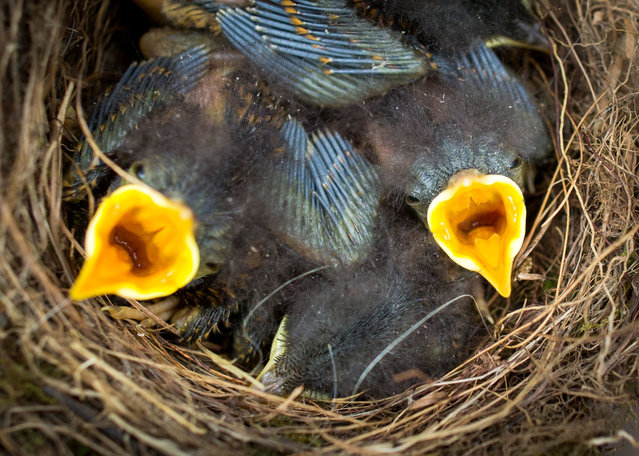 With widely open beaks, young robins wait in their nest for their parents to feed them on May 9, 2016 in Wiesbaden, western Germany. (Photo by Frank Rumpenhorst/AFP Photo/DPA) 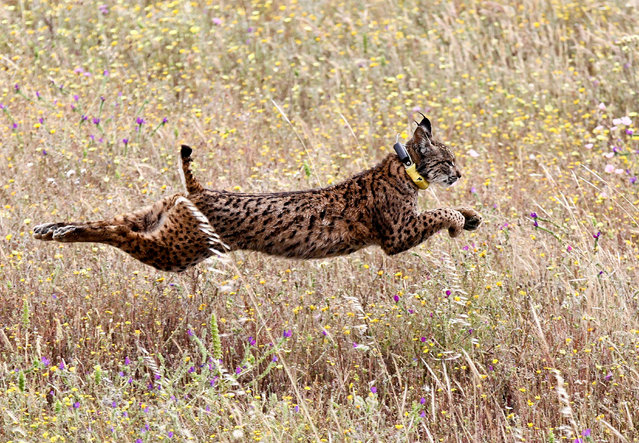 Iberian lynx Mistral jumps in a field after being released by Portugal's Minister of Environment Joao Matos Fernandes (unseen) and others in the Mount Milhouro (Herdade da Cela) region in Mertola, Portugal, 13 May 2016. Mistralis the 18th lynx bred in captivity released since late 2014. (Photo by Nuno Veiga/EPA) 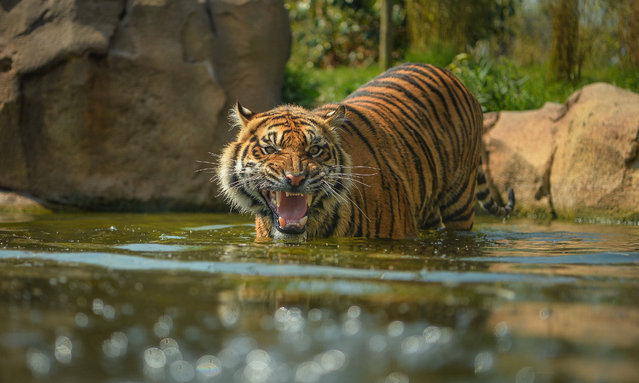 A young male Sumatran tiger in the pool at Chester zoo, UK on May 12, 2016. The zoo has a highly successful breeding record with the species and is part of the European endangered species breeding programme. (Photo by Chester Zoo/Rex Features/Shutterstock) 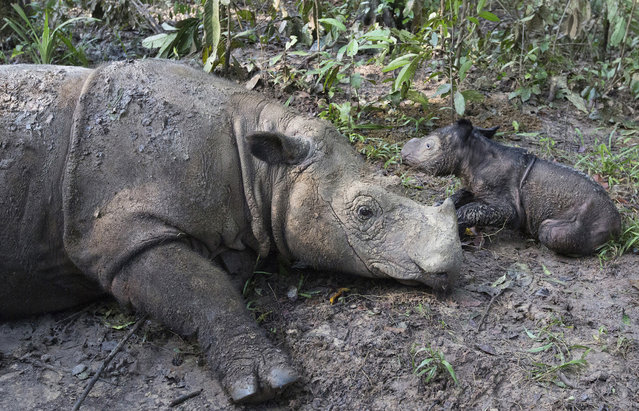 In this Thursday, May 12, 2016 photo released by International Rhino Foundation (IRF), Ratu, a 14-year-old Sumatran rhinoceros, sits next to its newborn calf at Sumatran Rhino Sanctuary in Way Kambas National Park, Indonesia. Ratu has given birth at the sanctuary in a success for efforts to save the critically endangered species. (Photo by Stephen Belcher/Canon/IRF/YABI via AP Photo) 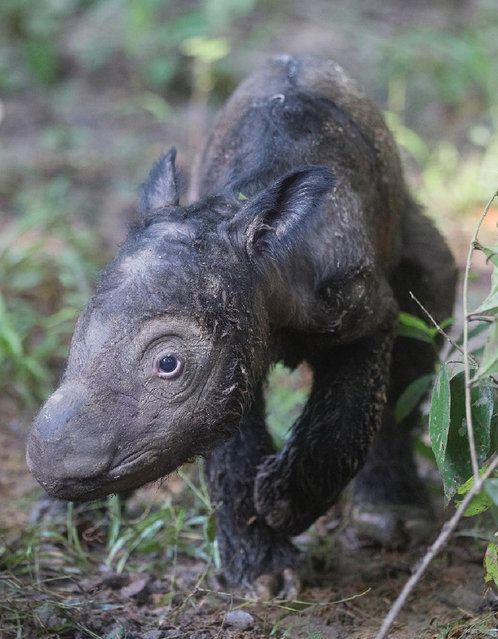 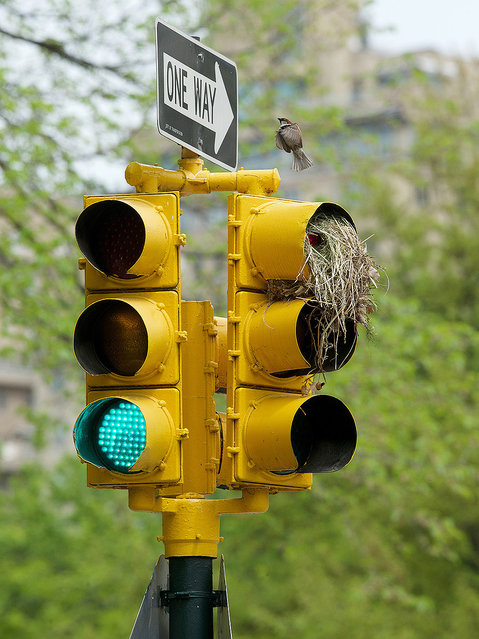 Three breeding House Sparrow couples have built their nests in three separate traffic lights all at the same junction in Central Park, Manhattan, New York Tuesday May 10, 2016. All three nests have chicks in them. Two of the nests are in the red lights and the third built in the yellow light. (Photo by Dan Callister/Pacific Coast News) 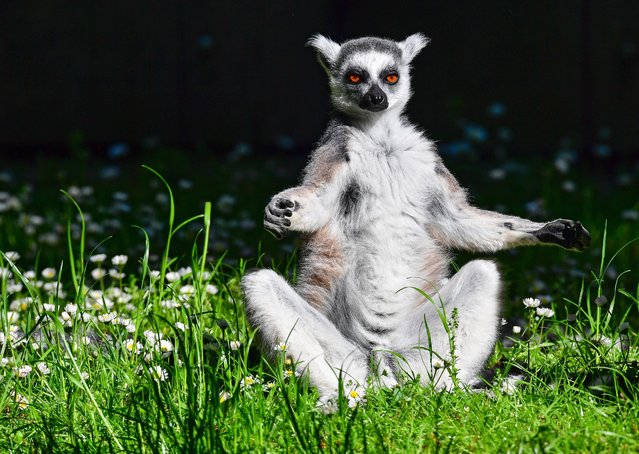 A ring-tailed lemur enjoys the sunny weather as it sits on a meadow at the zoo in Cottbus, Germany, 11 May 2016. Three baby lemurs were born at the zoo over the past few weeks. (Photo by Patrick Pleul/EPA) 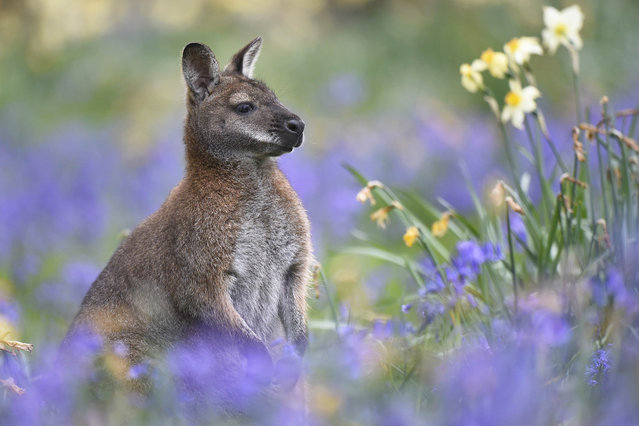 A wallaby seen surrounded by daffodils and blue bells in the bluebell wood at ZSL Whipsnade Zoo on May 9, 2016 in Whipsnade, England. The wallabies are to be found all over the zoo and run freely. (Photo by Tony Margiocchi/Barcroft Images) 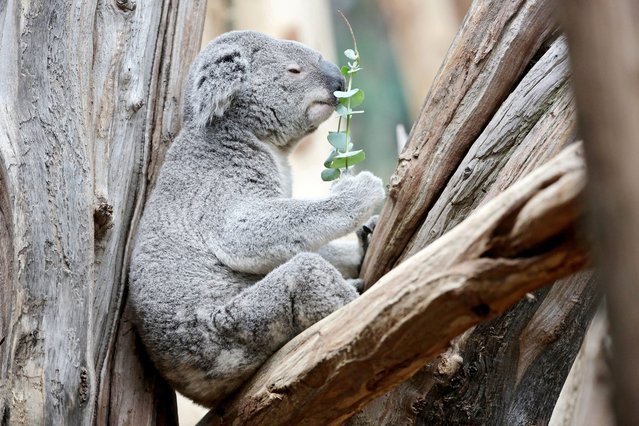 Koala Oobi-Oobie sits with a eucalyptus branch in his mouth in a tree in the new Koala House at the zoo in Leipzig, Germany, 12 May 2016. The Koala House was set up in the heritage-protected former primate house for 1.5 million euros. Leipzig is the third zoo in Germany with the Australian marsupials. Zoo Director Junhold is aiming to breed koalas in Leipzig. (Photo by Jan Woitas/EPA) 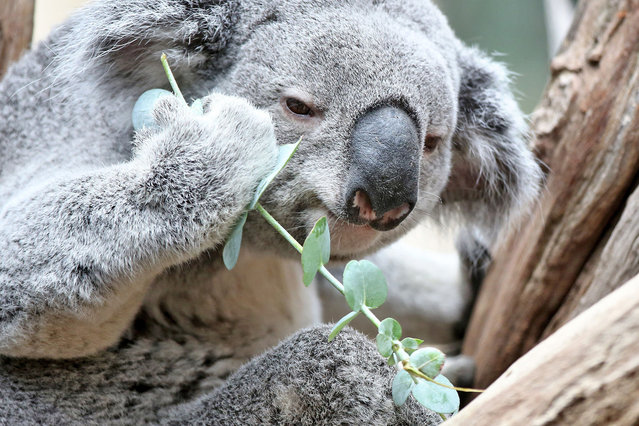 Koala “Oobi-Oobi” enjoys some eucalyptus leaves in his new enclosure at the zoo in Leipzig, eastern Germany, on May 12, 2016. (Photo by Jan Woitas/AFP Photo/DPA) 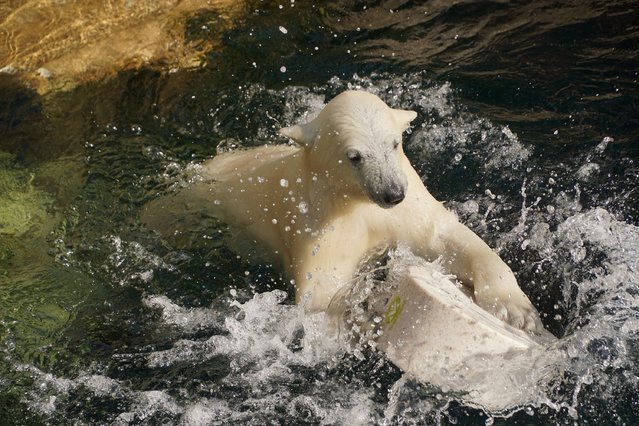 A handout picture made available on 11 May 2016 by Zoo am Meer (Zoo at the sea) shows polar bear cub Lili playing with a toy in the water at Zoo am Meer in Bremerhaven, Germany, 11 May 2016. (Photo by EPA/Zoo am Meer) 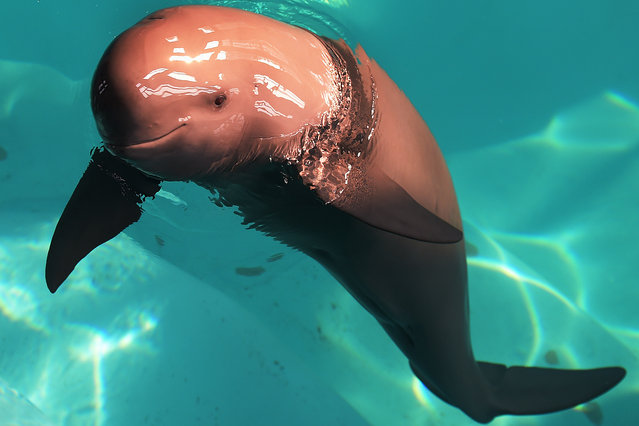 A finless porpoise is pictured in the Institute of Hydrobiology under Chinese Academy of Sciences, in Wuhan, central China's Hubei Province, May 10, 2016. The current finless porpoise population, according to scientists, is less than 1,000. As one of the most endangered animals, the finless porpoise is mainly to be found in the middle and lower reaches of Yangtze River and the connecting Poyang and Dongting lakes. (Photo by Cheng Min/Xinhua via ZUMA Wire) 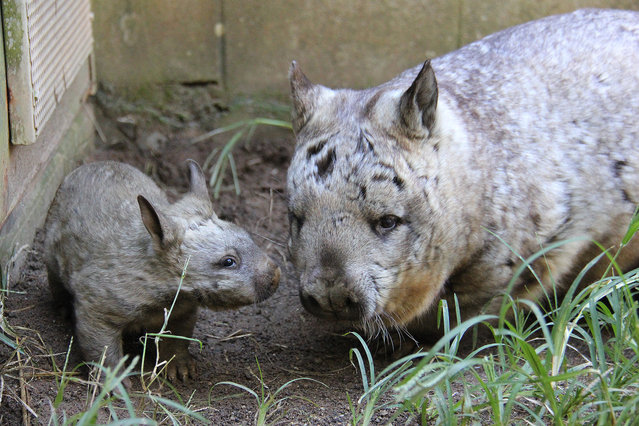 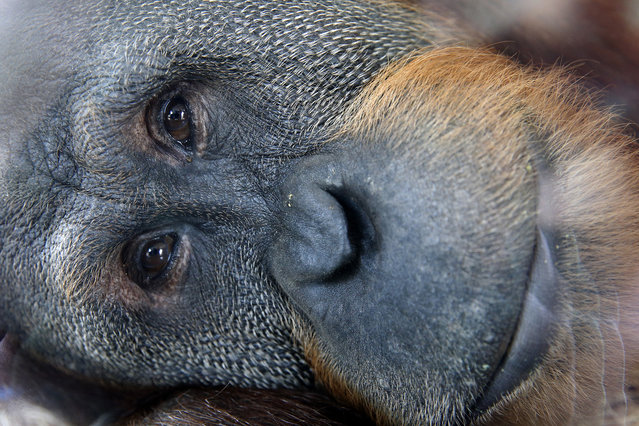 In this Friday, May 6, 2016, photo, Rocky, one of the orangutans in the Indianapolis Zoo's International Orangutan Center, looks out from one of the center's enclosures in Indianapolis. The zoo started using dynamic pricing in 2014, using software by Digonex. It was a way to prevent overcrowding before the opening of the zoo's popular orangutan exhibit. (Photo by Michael Conroy/AP Photo) 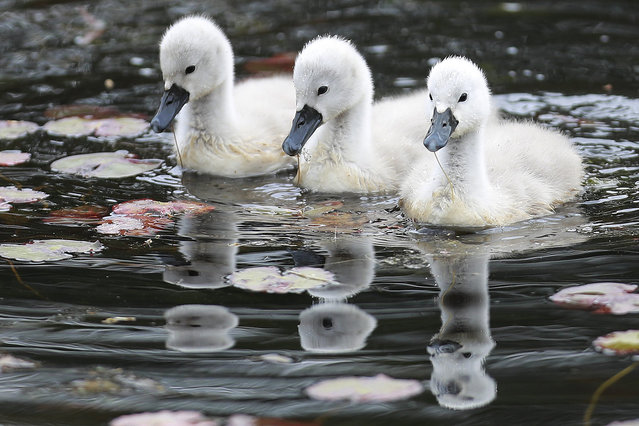 A trio of week-old Cygnets or baby swans swims in Bush Pond with both parents in Norfolk, Massachusetts, USA, 13 May 2016. Cygnets typically do not remain in the birth nest for more than a day and are cared for by both parents for about one year. (Photo by Matt Campbell/EPA) 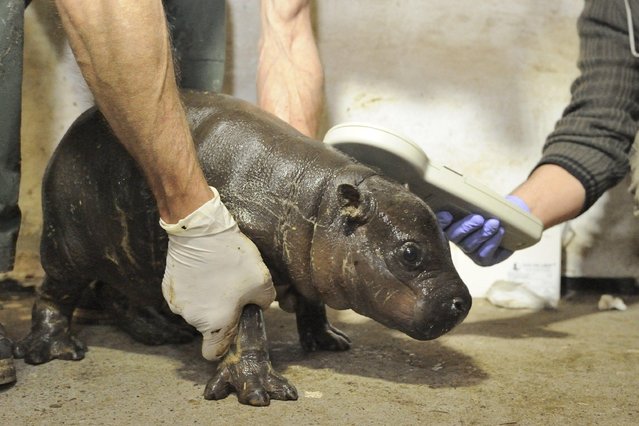 A two-week old pygmy hippopotamus (Choeropsis liberiensis) undergoes a routine medical check in its enclosure in Szeged Nature Reserve in Szeged, 170 kms southeast of Budapest, Hungary, Tuesday, May 10, 2016. The female hippo, which was born weighing just under 6 kilos has doubled the weight since birth. (Photo by Zoltan Gergely Kelemen/MTI via AP Photo) 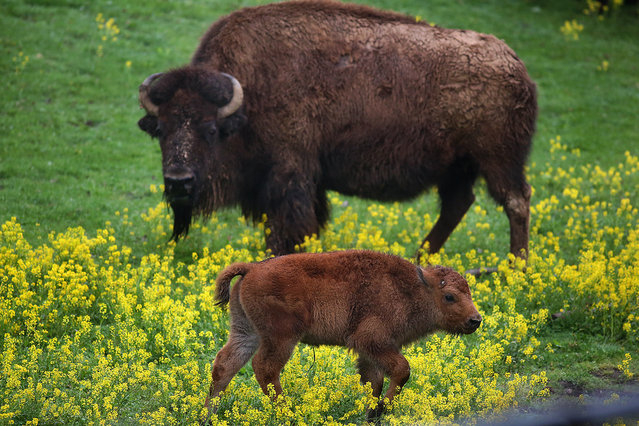 A male bison, born on April 30, roams with the herd Wednesday, May 11, 2016, at the Minnesota Zoo, in Apple Valley, Minn. (Photo by Jim Gerhz/Star Tribune via AP Photo) 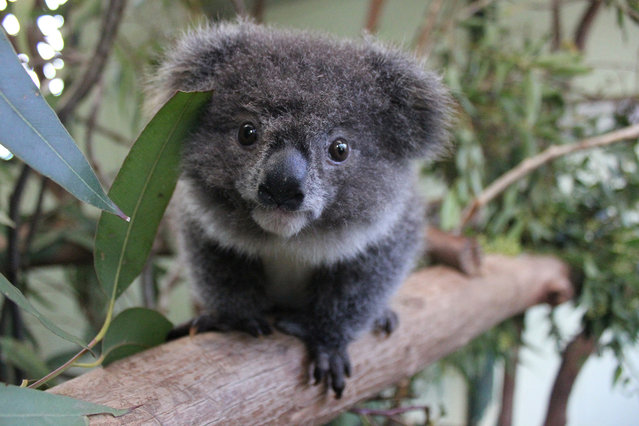 This cheeky koala BEAR-d all this week appearing to recreate a famous pose from the renaissance painting the Sleeping Venus. Art loving Archer the koala struck a pose for keepers at Featherdale Wildlife Park, in Sydney, Australia, on Thursday afternoon after his morning feed. In a nod to the old masters he reclined on his perch appearing to recreate the Sleeping Venus (c1510) by Giorgione and Titian. The two-and-a-half-year-old marsupial is no stranger to fame as he was previously voted Australias cutest animal because he is smaller than normal as he was hand-reared as a baby. (Photo by Caters News Agency)
Edit Del
15 May 2016 11:55:00, post received 0 comments
Publication archive:
←   →
Popular tags:
All tags
Last searches: