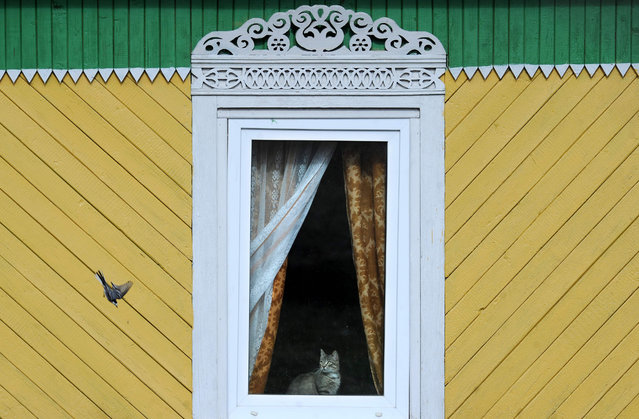 A cat looks at a bird through a window in the village of Zembin, some 75 km northeast of Minsk, on April 12, 2017. (Photo by Sergei Gapon/AFP Photo) 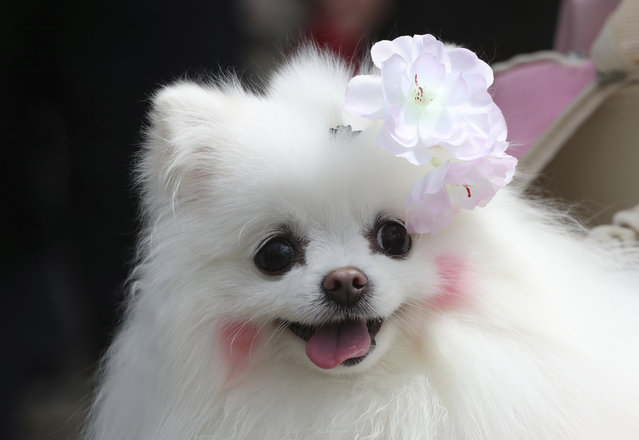 A dog with a cherry blossom-shaped pin, is seen in the cherry blossom festival in Seoul, South Korea, Sunday, April 9, 2017. (Photo by Lee Jin-man/AP Photo) 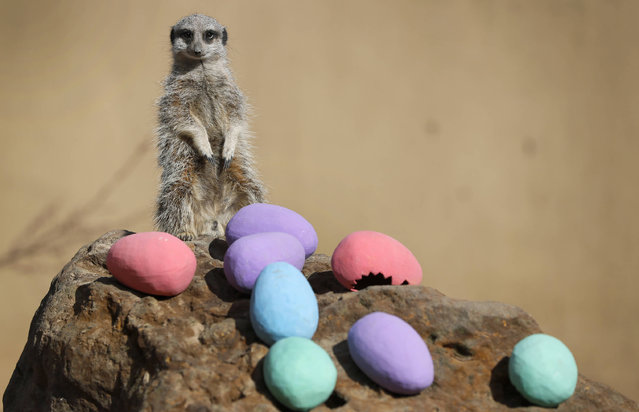 Robbie the Meerkat enjoys an Easter treat of eggs filled with vegetables, at London Zoo, Thursday, April 13, 2017. Zookeeper Veronica Heldt, said: “While there will be no chocolate for our inquisitive meerkats, we've prepared an Easter egg hunt for the clan”. This will encourage them to seek out treats hidden in the foliage and forage for food, mimicking how they would seek their food in the wild. (Photo by Kirsty Wigglesworth/AP Photo) 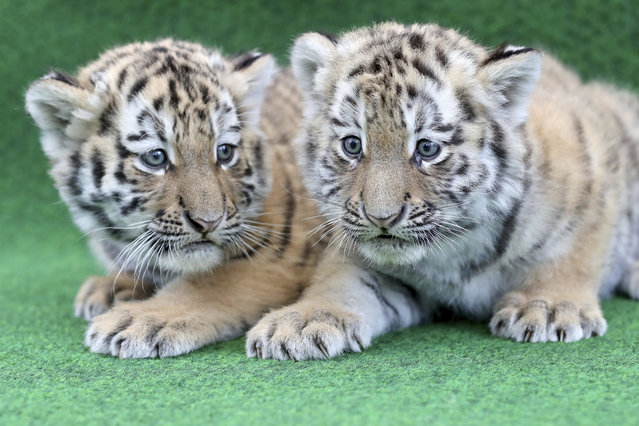 Two six-week-old baby tigers wait to be vaccinated for the first time at a Zoo in Leipzig, Germany, 11 April 2017. The vaccinations are repeated 3 to 4 times before they turn one. The pair each weigh about 6 kg and their mother weighs 350 kg. The Zoo is in the process of naming them. (Photo by Jan Woitas/Picture-alliance/DPA/AP Images) A young camel looks on at Veszprem Zoo, in Veszprem, 108 kms southwest of Budapest, Hungary, 12 April 2017. The animal is twelve days old. (Photo by Boglarka Bodnar/EPA) 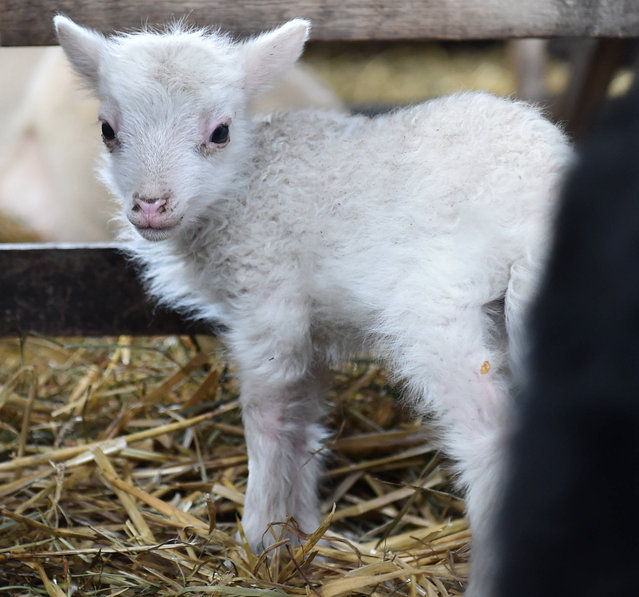 A few days young sheep, a so called Easter lamb, stands in a stable of a farmstead near the small Bavarian village of Puchheim close to Munich, southern Germany, on April 12, 2017. (Photo by Christof Stache/AFP Photo) Desert monkeys gather along the Al-Hada road that leads to the city of Taif, on the slopes of the Sarawat Mountains near the Muslim holy city of Mecca, Saudi Arabia, Wednesday, April 12, 2017. (Photo by Amr Nabil/AP Photo) 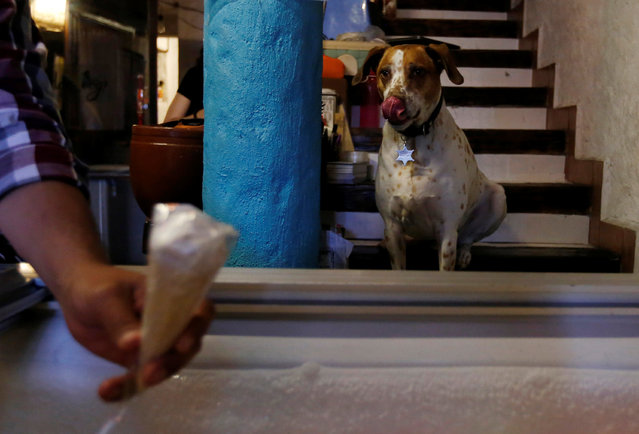 A dog looks at an ice cream at an ice-cream shop where ice cream is designed especially for canines in Mexico City, Mexico April 9, 2017. (Photo by Carlos Jasso/Reuters) 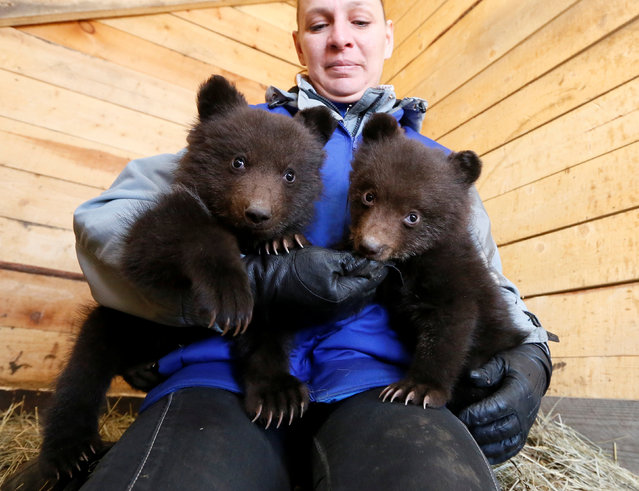 An employee of the Brave Heart private horse club plays with orphaned brown bear cubs who temporarily live there, after their mother has been found killed by poachers in Taiga forest, in a suburb of Krasnoyarsk, Siberia, Russia, April 12, 2017. (Photo by Ilya Naymushin/Reuters) 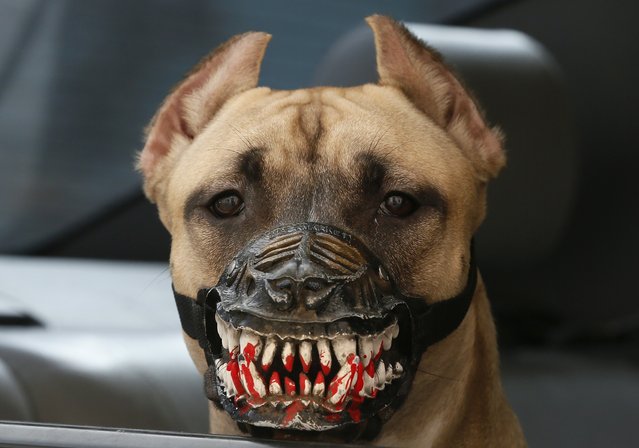 A Staffordshire Terrier wearing a muzzle looks out of a car in Krasnoyarsk, Russia, April 14, 2017. (Photo by Ilya Naymushin/Reuters) 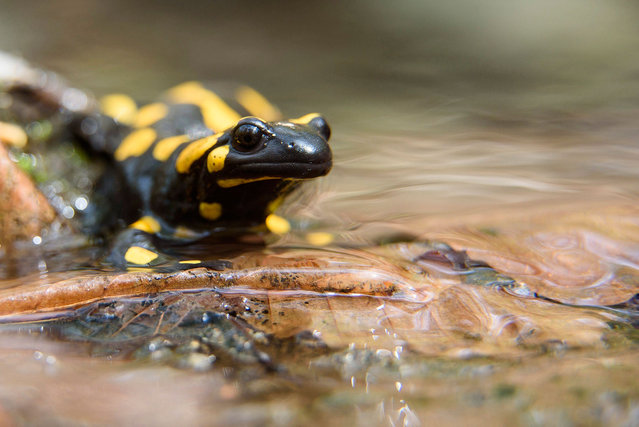 A fire salamander (Salamandra salamandra) by a brook at Somosko near Salgotarjan, 109 kms northeast of Budapest, Hungary, 11 April 2017. (Photo by Peter Komka/EPA) 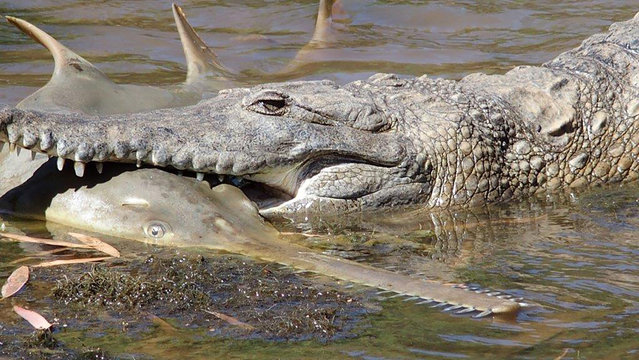 This undated handout photo released by the Department of Parks and Wildlife and Murdoch University on April 13, 2017 shows a freshwater crocodile preying on a young sawfish in Western Australia's Fitzroy River. The rare photograph released on April 13 by Murdoch University shows a young sawfish caught in the clutches of a freshwater crocodile's jaw. The sharpened teeth on the saw-like snout of the critically endangered Australian sawfish proved little defence against its deadliest underwater predators the crocodile and shark. (Photo by AFP Photo/Murdoch University and Department of Parks and Wildlife) 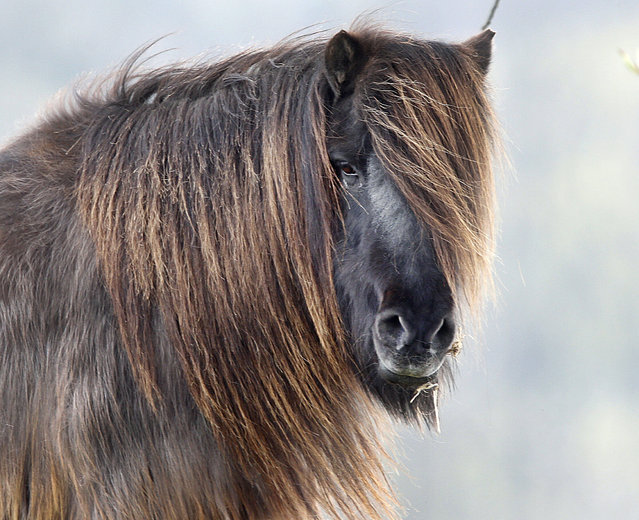 A horse with long hair stands in its enclosure on a meadow in Weidenhahn, Germany, Tuesday, April 11, 2017. (Photo by Michael Probst/AP Photo) 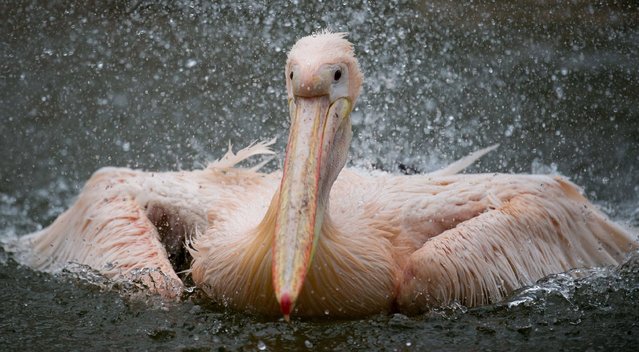 A white pelican splashes around in its enclosure at Tierpark Hagenbeck zoo in Hamburg, northern Germany, on April 12, 2017. (Photo by Daniel Reinhardt/AFP Photo/DPA)