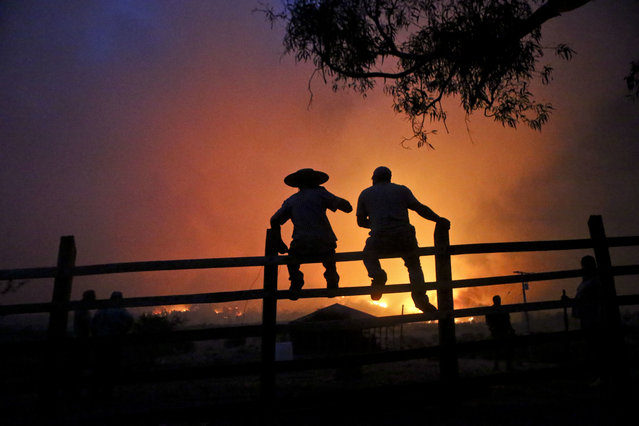 Residents watch the forest burn in Portezuelo, Chile, Sunday, January 29, 2017. The fires were one of the country's biggest natural disasters in decades, according to a government report. (Photo by Esteban Felix/AP Photo) 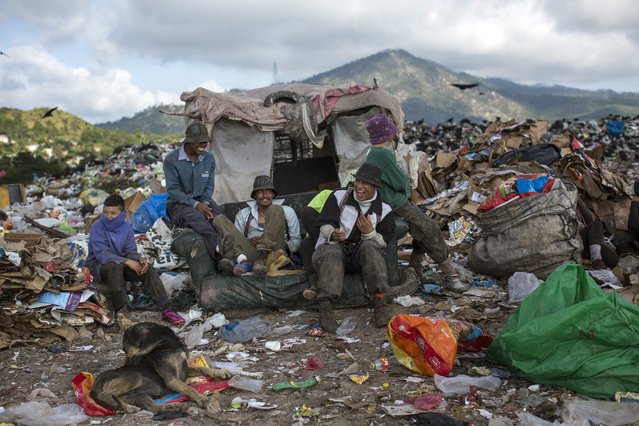 Men and boys joke around as they take a break from collecting plastic and cardboard to resell, at “El Crematorio” or The Crematory, the biggest dump on the outskirts of Tegucigalpa, Honduras, Friday, November 24, 2017. (Photo by Rodrigo Abd/AP Photo) 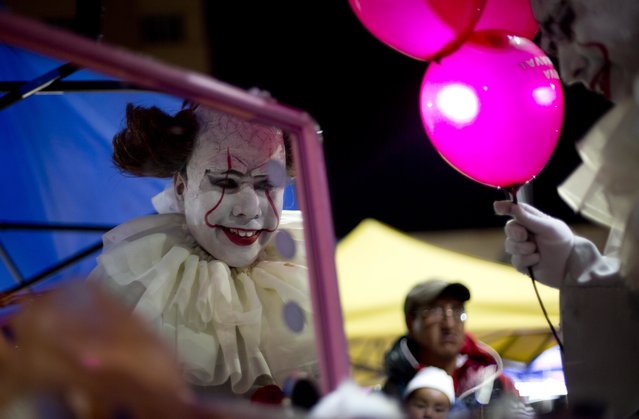 A person dressed in a diabolical clown costume looks in the mirror at the start of the Zombie Walk in La Paz, Bolivia, late Saturday, October 28, 2017. The annual walk is a Halloween charity event to collect money to feed street animals, according to organizers. (Photo by Juan Karita/AP Photo) 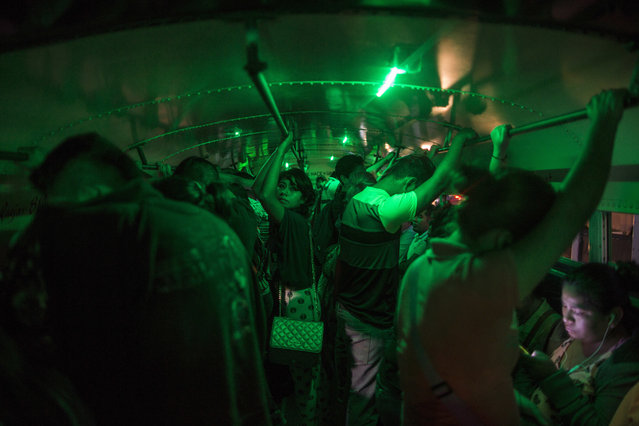 In this March 21, 2017 photo, people stand in a bus waiting to go home after their work day at a “maquiladora” for car accessories in Matamoros, Tamaulipas state, Mexico, across the border from Brownsville, Texas. (Photo by Rodrigo Abd/AP Photo) 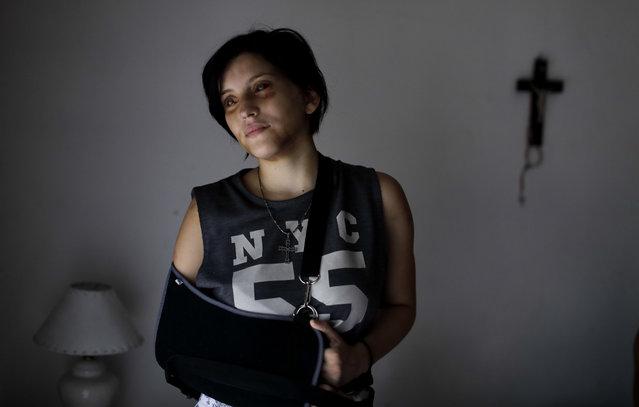 In this February 8, 2017 photo, Belen Torres poses for a portrait in Buenos Aires, Argentina. Torres was beaten by her boss, just a few days after starting her first job in the capital doing administrative paperwork for an anesthesiologist, to help her family pay the bills. The doctor asked her to get high and tried to have s*x with her. After he beat her, she was able to escape and run outside, where an unknown man called 911. (Photo by Natacha Pisarenko/AP Photo) 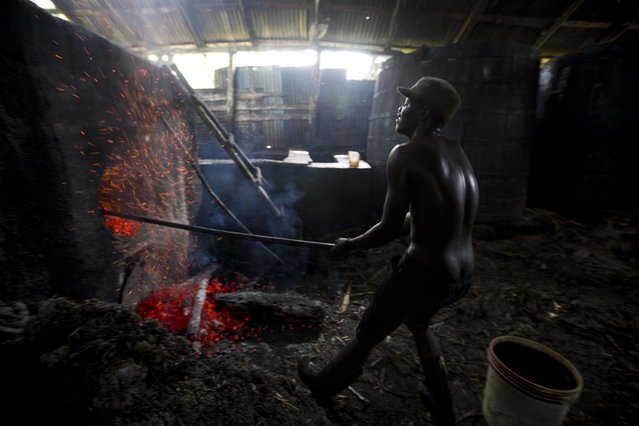 In this June 16, 2017 photo, Batel Delciner, 23, removes wood from a furnace to lower the heat cooking sugar juice at the Ti Jean distillery, which produces clairin, a sugar-based alcoholic drink, in Leogane, Haiti. The broth is cooked for about four hours after a fermentation period of four to eight days. (Photo by Dieu Nalio Chery/AP Photo) 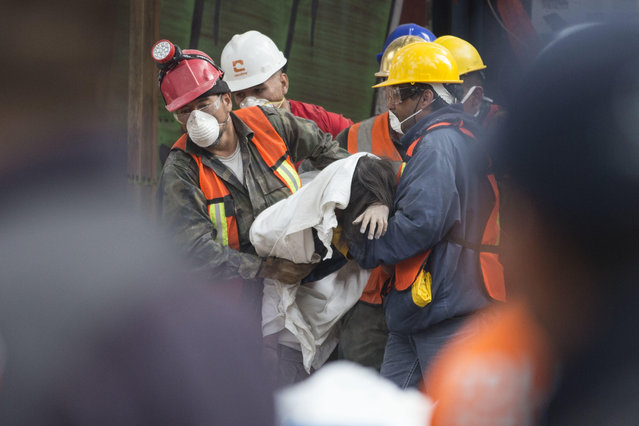 Rescue workers carry a body recovered from a building felled by a 7.1 magnitude earthquake, in the Ciudad Jardin neighborhood of Mexico City, Thursday, September 21, 2017. Thousands of professionals and volunteers are working frantically at dozens of wrecked buildings across the capital and nearby states looking for survivors of the powerful quake that hit Tuesday. (Photo by Moises Castillo/AP Photo) 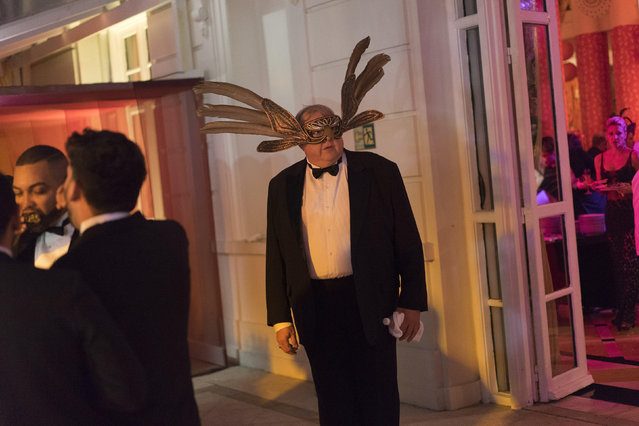 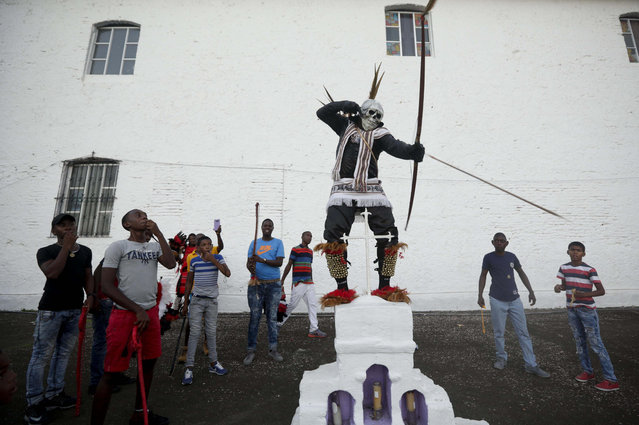 In this March 18, 2017 photo, a man dressed as a “devil” performs near the San Felipe church during the Congos and Devils festival in Portobelo, Panama. The biennial festival takes place in the historical town along the Atlantic Panamanian coast. The Portobelo festival, a blend of Catholic and African beliefs, was established in 1999 by the community to preserve their culture in honor of their ancestors, who were escaped former slaves from the Congo known as “Cimarrons”. (Photo by Arnulfo Franco/AP Photo) 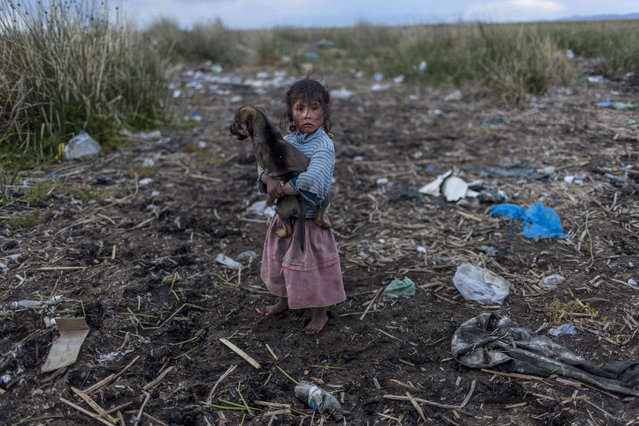 Melinda Quispe walks on the trash strewn shore of Lake Titicaca, holding her dog in her village Kapi Cruz Grande in Peru's Puno region, Saturday, February 4, 2017. The governments of Peru and Bolivia signed a pact in January to spend more than $500 million to attack the pollution problem of Lake Titicaca, though the details were vague. (Photo by Rodrigo Abd/AP Photo) 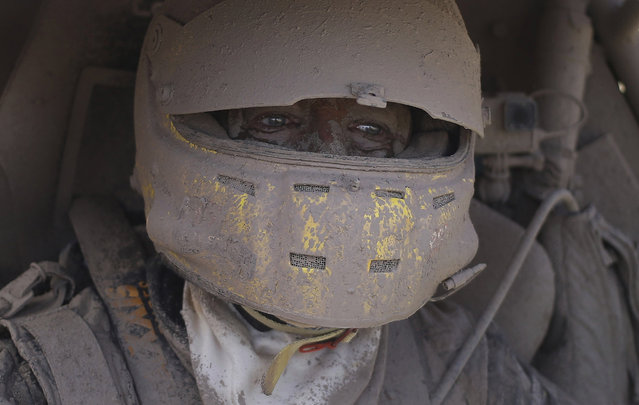 Suzuki car driver Tim Coronel, of the Netherlands, is covered in dirt after completing the second stage of the Dakar Rally between Resistencia and San Miguel de Tucuman, Argentina, Tuesday, January 3, 2017. The race started in Paraguay and passed through Bolivia as well. (Photo by Martin Mejia/AP Photo) 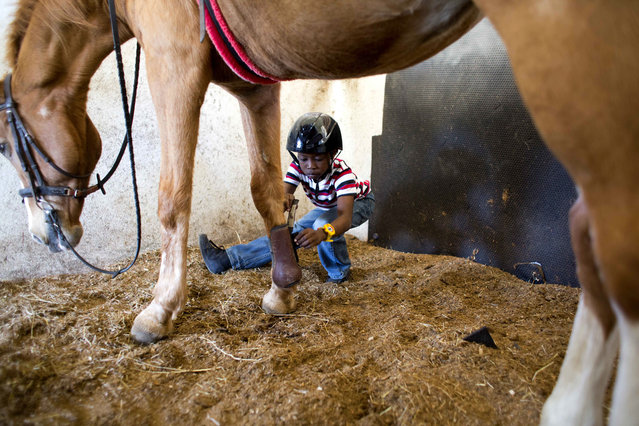 Judeley Hans Debel squats down to remove a boot from Tic Tac, holding out his prosthetic leg after his therapeutic riding lesson at the Chateaublond Equestrian Center in Petion-Ville, Haiti, Saturday, January 7, 2017. Anne-Rose Schoen, who founded the equestrian center, said perhaps the most important thing about therapeutic riding is it makes youngsters happy in a country where disabled people face enormous challenges. (Photo by Dieu Nalio Chery/AP Photo) A woman dressed for la “La Diablada” festival walks down a road in Pillaro, Ecuador, Friday, January 6, 2017. Local legend holds that anyone who adopts a costume for the celebration and wears it at the event six years in a row will have good luck. (Photo by Dolores Ochoa/AP Photo) 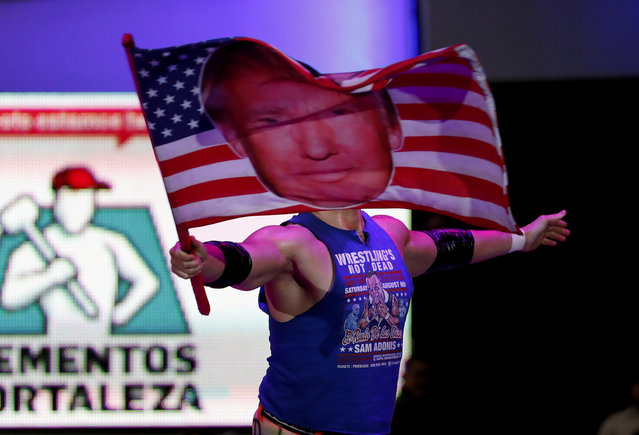 American pro wrestler Sam Polinsky, a.k.a. Sam Adonis, takes the ring at Arena Mexico waving a U.S. flag emblazoned with a photo of U.S. President Donald Trump, in Mexico City, Sunday, February 12, 2017. He's the guy Mexicans love to hate: The wrestler has become a sensation in Mexico City by adopting the ring persona of a flamboyant Trump supporter. (Photo by Eduardo Verdugo/AP Photo) 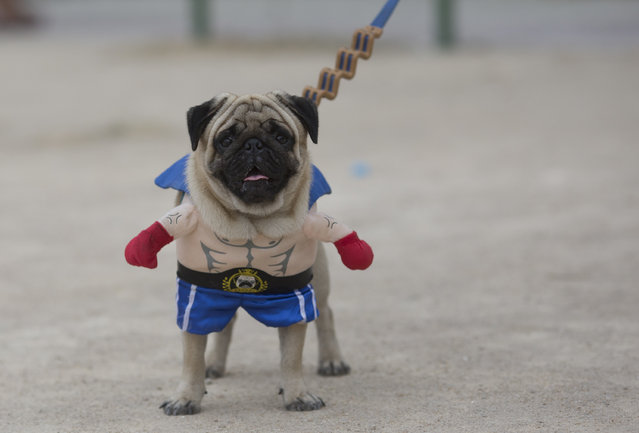 “Mike” dressed in a boxer costume takes part in the "Blocao" dog carnival parade in Rio de Janeiro, Brazil, Saturday, February 25, 2017. Carnival went to the dogs as pet owners took to the streets for their own party, with their four-legged friends in ornate costumes. (Photo by Silvia Izquierdo/AP Photo) 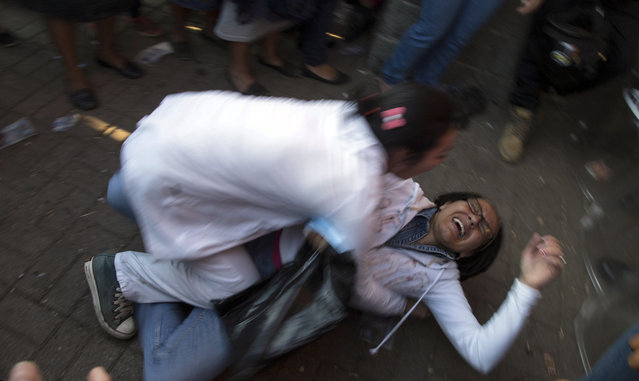 A woman who's child died in a fire is held by her sister outside the children's shelter in San Jose Pinula, Guatemala, Wednesday, March 8, 2017 photo. The fire that killed 40 girls at the Virgen de la Asunción Safe Home started when ringleaders took a match to a foam mattress to protest the abuse they had suffered there. (Photo by Luis Soto/AP Photo) 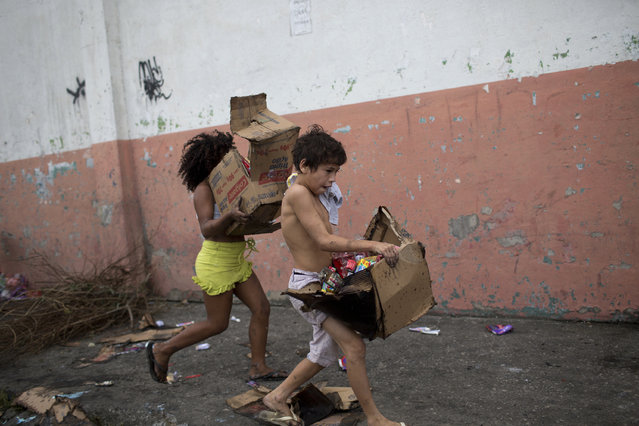 Children run off with boxes they filled with merchandise salvaged from a cargo truck allegedly set on fire by drug traffickers in Rio de Janeiro, Brazil, Tuesday, May 2, 2017. Several public buses and cargo trucks were torched in what military police said was likely gang retaliation for a large anti-drug operation. (Photo by Silvia Izquierdo/AP Photo) 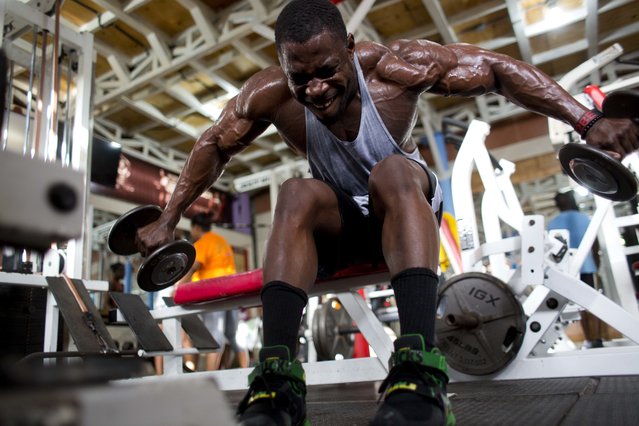 Bodybuilder Spely Laventure trains for an upcoming competition between Haiti and Dominican Republic in Port-au-Prince, Haiti, Thursday, July 20, 2017. Laventure could not find a coach when he began training, so he studied YouTube videos and followed bodybuilders on Instagram to learn about the sport and imitate workouts. (Photo by Dieu Nalio Chery/AP Photo) 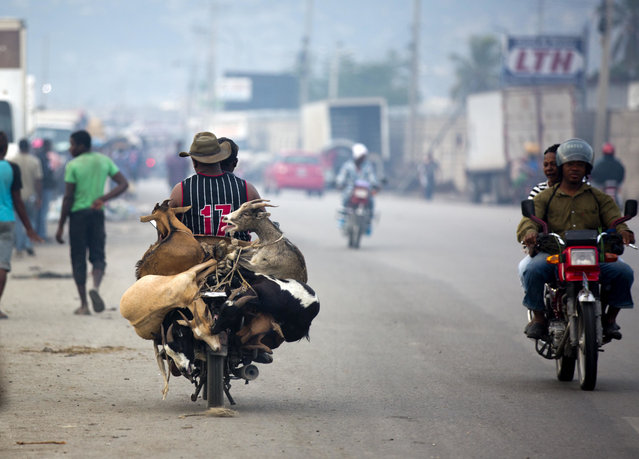 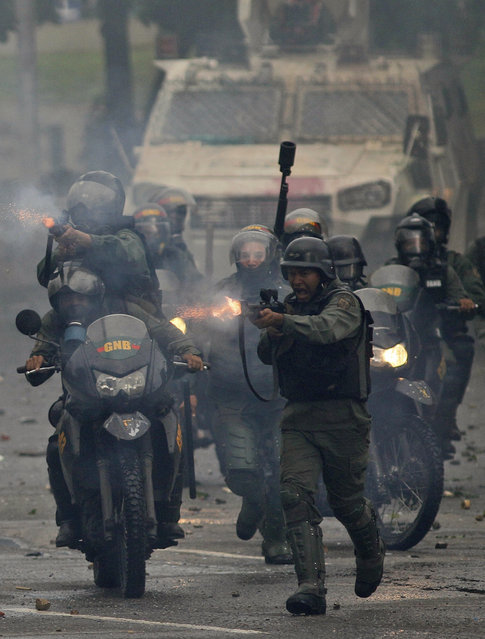 Bolivarian National Guards fire rubber bullets as they advance toward anti-government demonstrators in Caracas, Venezuela, Friday, July 28, 2017, two days before the vote to begin the rewriting of Venezuela's constitution. Protesters say the election of a constitutional assembly will allow President Nicolas Maduro to eliminate democratic checks and balances and install an authoritarian single-party system. (Photo by Ariana Cubillos/AP Photo) 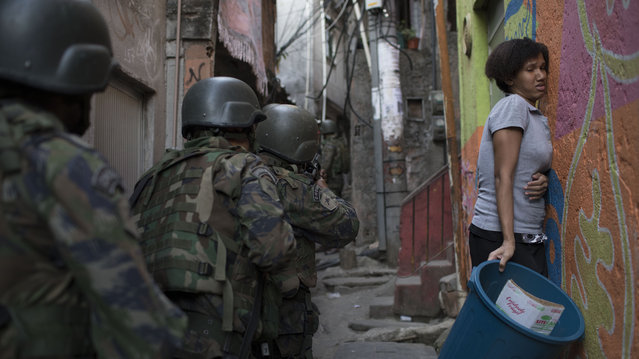 A woman presses herself against the wall as soldiers patrol an alley in Rocinha slum in Rio de Janeiro, Brazil, Friday, September 22, 2017. Shootouts erupted in several areas of Rio de Janeiro on Friday, prompting Brazilian authorities to shut roads, close schools and ask for the army to intervene. (Photo by Leo Correa/AP Photo) 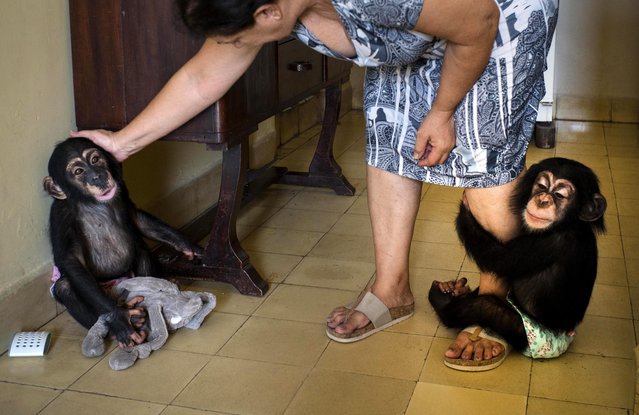 Zoologist Marta Llanes caresses baby chimpanzee Anuma II, left, while Ada hangs on to her leg, at Llanes' apartment in Havana, Cuba, Tuesday, April 4, 2017. Llanes has forgiven them every transgression. It's hard to stay angry at a baby chimpanzee when it clambers up your leg and into your arms and plants a kiss on your cheek in a plea for forgiveness. (Photo by Ramon Espinosa/AP Photo) 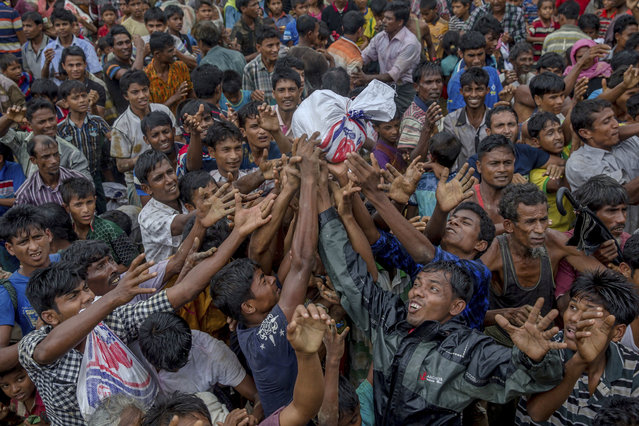 Rohingya Muslims, who crossed over from Myanmar into Bangladesh, stretch their arms out to collect food items distributed by aid agencies near Balukhali refugee camp, Bangladesh, on September 18, 2017. (Photo by Dar Yasin/AP Photo) 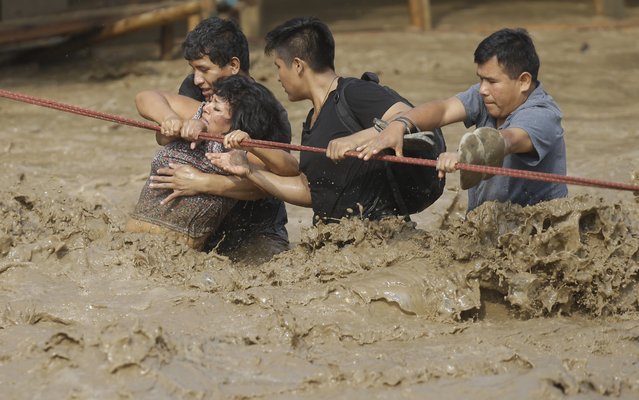 People stranded in floodwaters hold onto a rope as they wade to safety in Lima, Peru, on March 17, 2017. Intense rains and mudslides wrought havoc around the Andean nation and caught residents in Lima, a desert city of 10 million where it almost never rains, by surprise. (Photo by Martin Mejia/AP Photo) 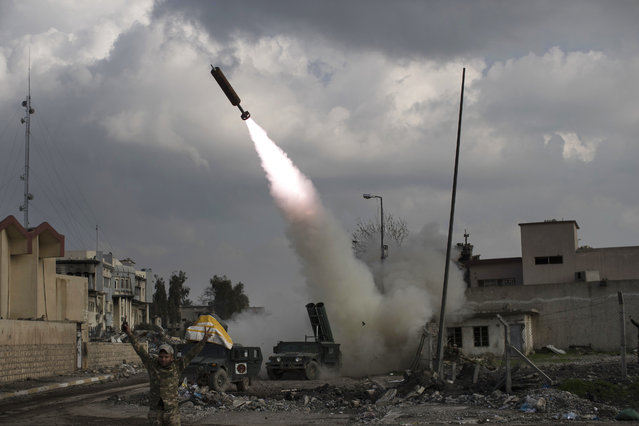 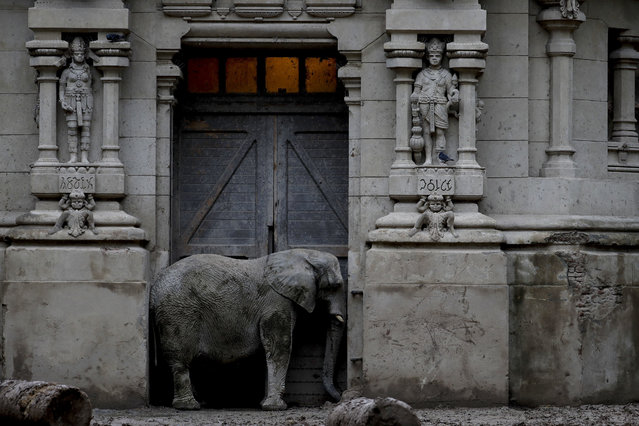 Pupy, an African elephant, stands in the doorway of his enclosure at the former city zoo now known as Eco Parque in Buenos Aires, Argentina, on May 12, 2017. A year ago the 140-year old Buenos Aires zoo closed its doors and was transformed into a park. The first director decided that the animals should be housed in buildings that reflected their countries of origin. A replica of a Hindu temple was built for the Asian elephants. (Photo by Natacha Pisarenko/AP Photo) 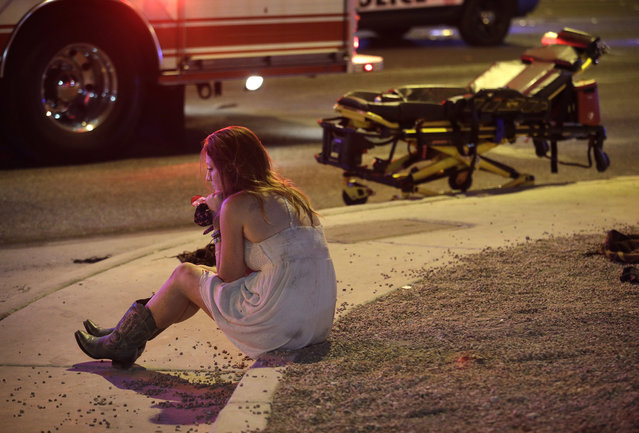