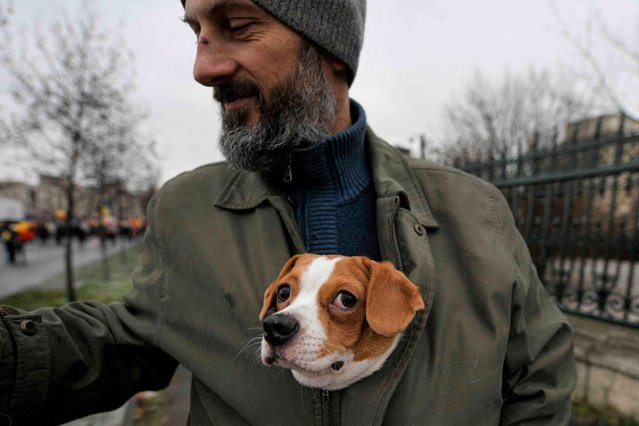 An anti-COVID-19 green pass protester keeps Vasile the dog warm inside his jacket, outside the Palace of Parliament in Bucharest, Romania, Tuesday, December 21, 2021. People gathered to protest against the introduction of the COVID-19 “green certificate” in the workplace a measure considered by authorities to limit the coronavirus infections. (Photo by Andreea Alexandru/AP Photo) 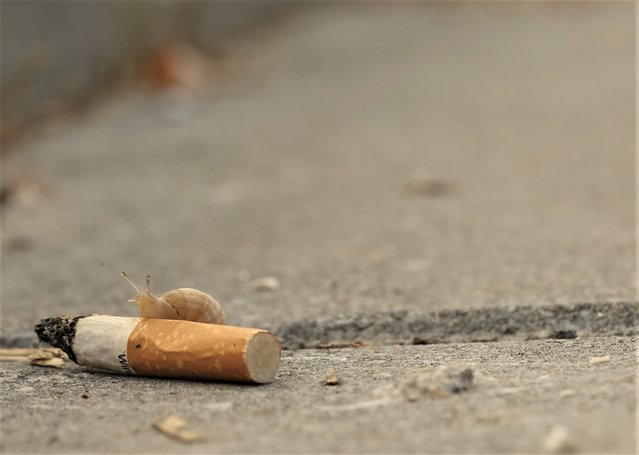 A snail is seen on a sidewalk in Cankaya district of Ankara, Turkey on September 25, 2021. Snails continue their lives despite the adverse environmental conditions created by people in the city. (Photo by Ismail Duru/Anadolu Agency via Getty Images) 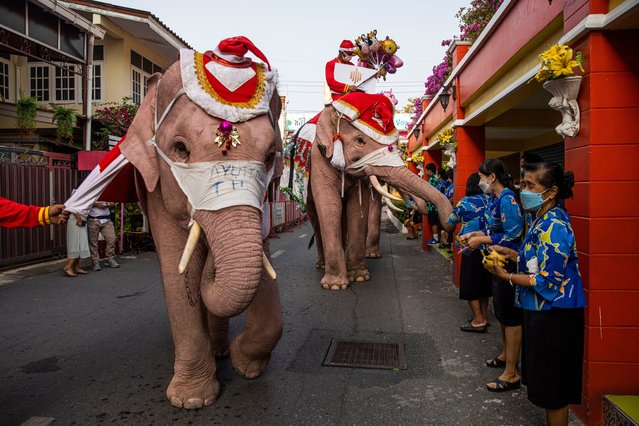 Mahouts and their elephants hand out balloons to children and teachers during Christmas celebrations at the Jirasart Witthaya school in Ayutthaya on December 24, 2021. (Photo by Jack Taylor/AFP Photo) 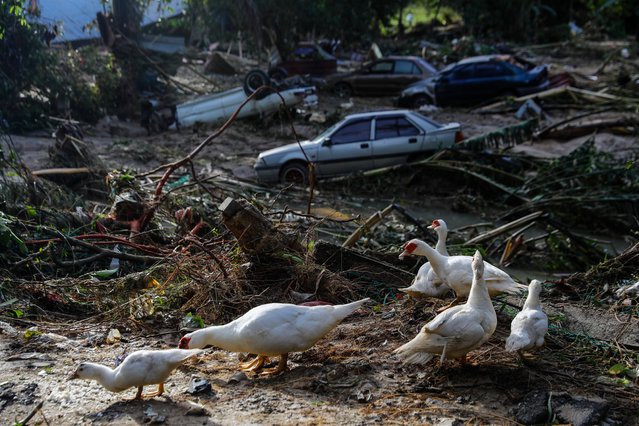 Ducks are seen near damaged cars after the flooding a day earlier at Kuala Langat, 15KM from KuaLumpur, Malaysia, 20 December 2021. Several Malaysian states has been struck by floods caused by two days of heavy rain leaving five killed and 41,000 of residents to be evacuated with many trapped in their vehicles and homes. (Photo by Fazry Ismail/EPA/EFE) 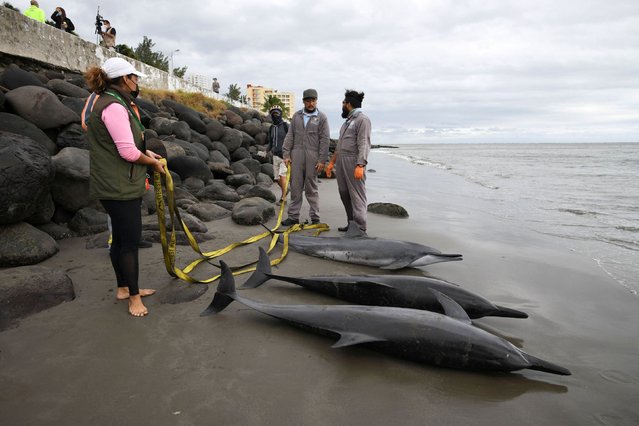 Government officials stand next to three dolphins that died stranded at a beach as biologists believe the cause was a cold front and a change of temperature that made them disoriented, according to local media, in Boca del Rio, Veracruz, Mexico on December 20, 2021. (Photo by Yahir Ceballos/Reuters) 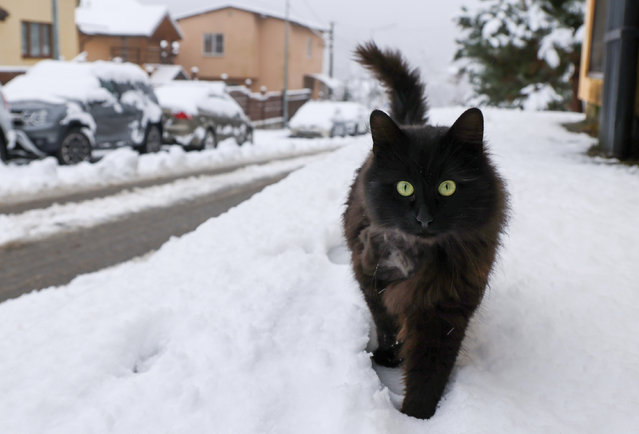 A cat is seen in a street in the village of Krasnaya Polyana in Sochi, Russia on December 21, 2021 after a snowfall. (Photo by Dmitry Feoktistov/TASS) 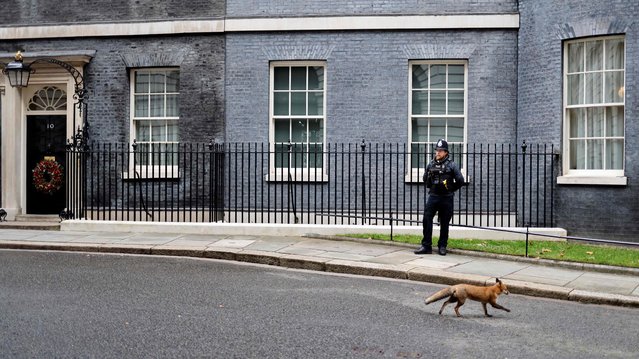 A fox walks past Number 10 Downing Street in central London on December 14, 2021. Britain confirmed what is thought to be the first confirmed death after infection with the Omicron variant, as the country launched an ambitious Covid booster shot programme to stop the virus spiralling out of control. (Photo by Tolga Akmen/AFP Photo) 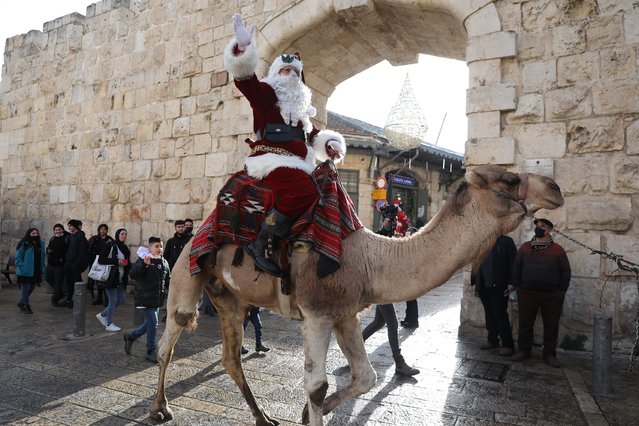 Issa Kassissieh, dressed as Santa Claus, rides a camel near the Jaffa Gate in Old City of Jerusalem, 23 December 2021, ahead of the Christ​mas Holiday. (Photo by Abir Sultan/EPA/EFE) 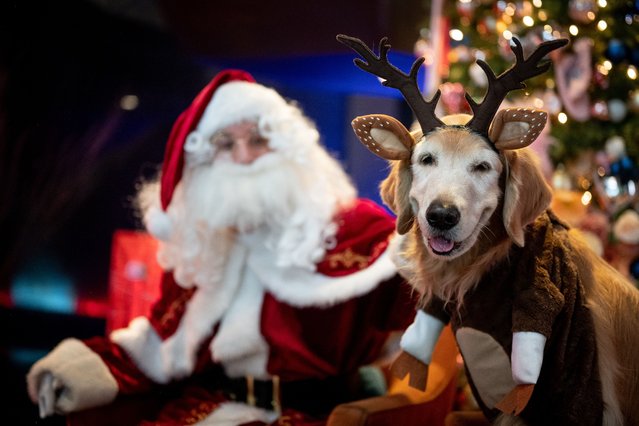 Dogs are seen at the 2021 Pawlidays celebration at Sofitel Hotel Los Angeles on December 18, 2021 in Los Angeles, California. (Photo by Emma McIntyre/Getty Images) 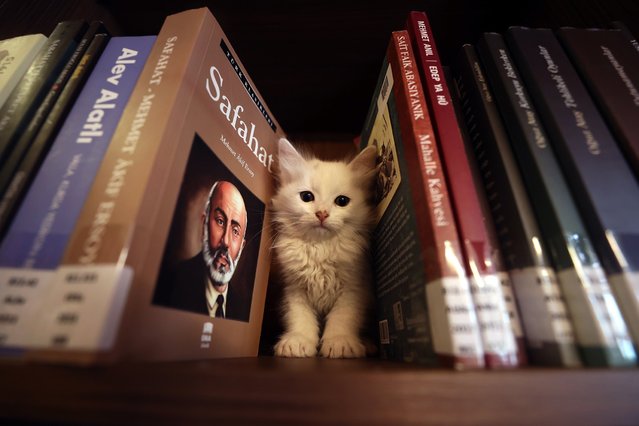 A Kitten is seen amid the books on a shelf at “Kedili Tekke” (lodge with cats), used as a library at present in Bursa, Turkey on March 30, 2021. The library used to be a Sufi lodge and built by Sheikh Ahmet Efendi during 16th century of Ottoman period, was named after the hosts who fed cats around. The cats at the library taken care of by Osman Gazi Municipality Stray Animals Center. (Photo by Ali Atmaca/Anadolu Agency via Getty Images) 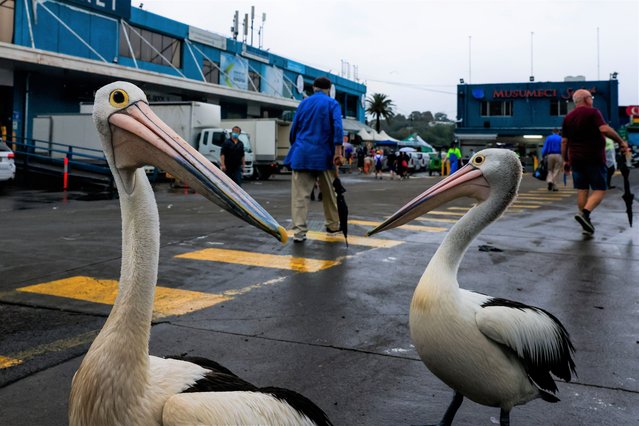 Pelicans are seen at the Sydney Fish Market on December 23, 2021 in Sydney, Australia. The Sydney Fish Market experiences its busiest trade over the Christmas week including the 36 hour marathon from 5am on the 23rd December until 5pm Christmas Eve, with over 350 tonnes of seafood expected to be sold at the event during the non-stop trading period. (Photo by Jenny Evans/Getty Images) 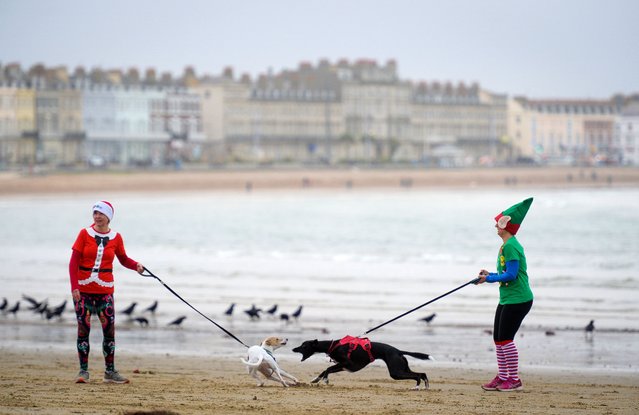 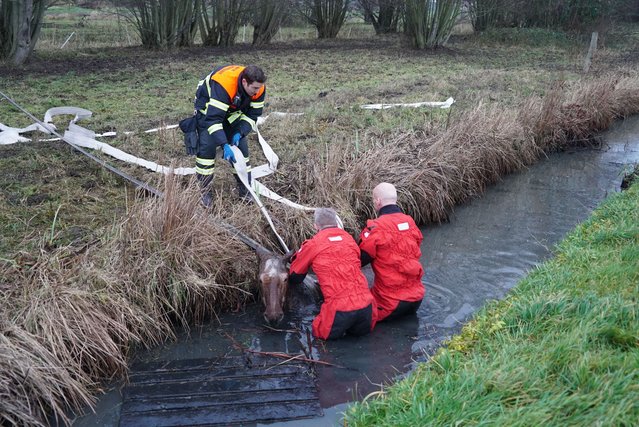 A horse is rescued after falling into a ditch in Hamburg, Germany on December 15, 2021. (Photo by Action Press/Rex Features/Shutterstock) 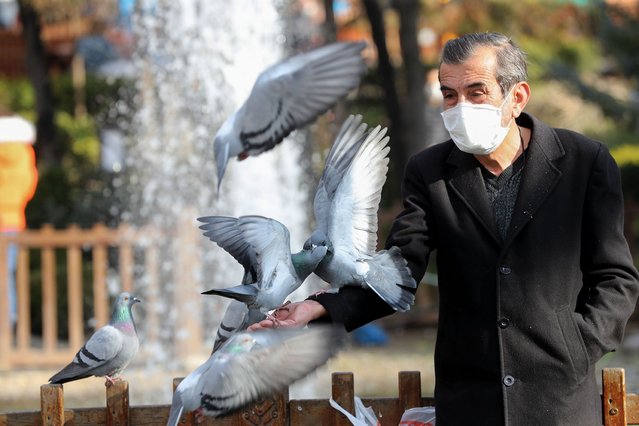 A man wearing a protective face mask feeds pigeons in Kugulu Park in Ankara, Turkey on January 4, 2021, amid the Covid-19 pandemic. (Photo by Adem Altan/AFP Photo) 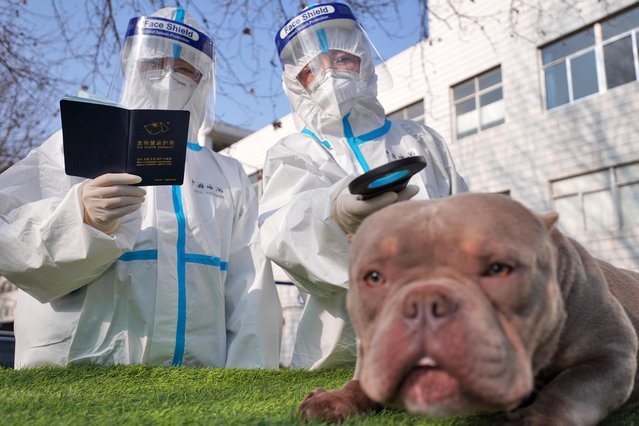