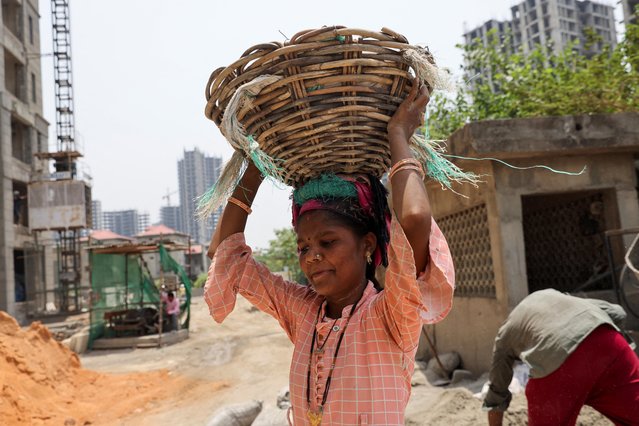 A labourer works at a construction site on a hot summer day in Noida, India, May 12, 2022. (Photo by Anushree Fadnavis/Reuters) 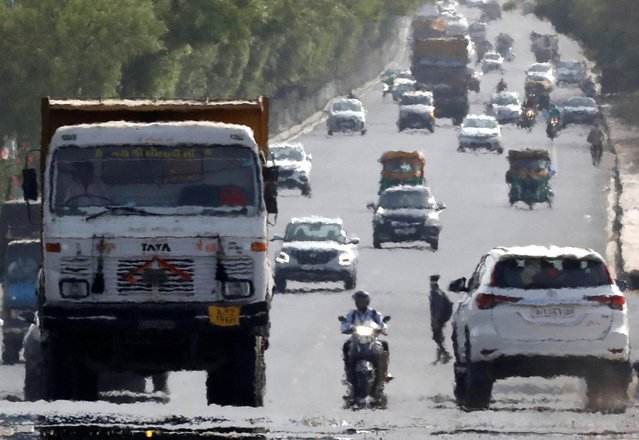 Traffic moves on a road in a heat haze during hot weather on the outskirts of Ahmedabad, India, May 12, 2022. (Photo by Amit Dave/Reuters) 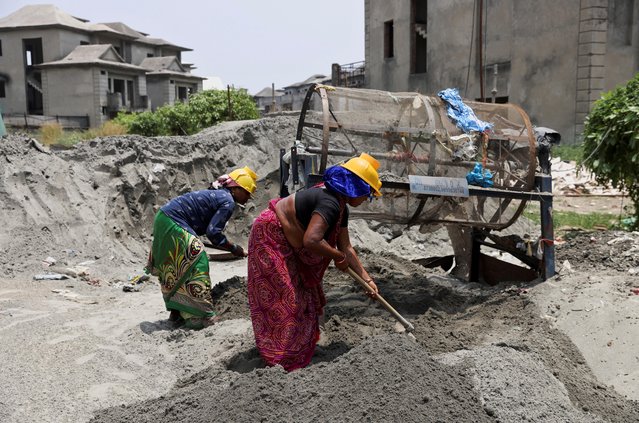 Labourers work at a construction site on a hot summer day in Noida, India, May 12, 2022. (Photo by Anushree Fadnavis/Reuters) 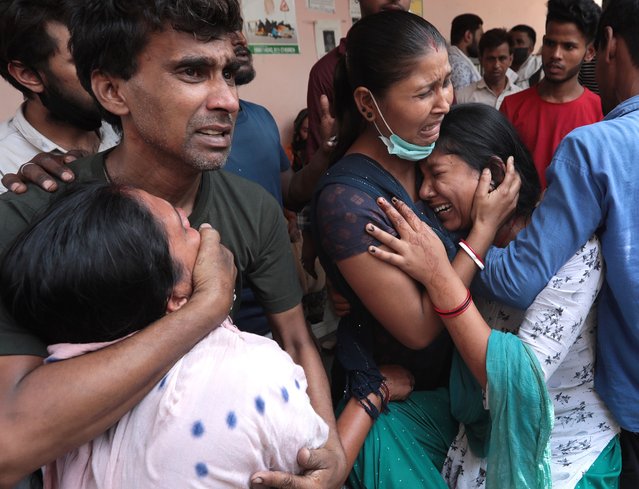 Relatives of one of the victims of a commercial building fire mourn outside a morgue at Sanjay Gandhi Memorial Hospital in the outskirts of New Delhi, India, 14 May 2022. Local police confirmed at least 27 people died after a fire broke out in a commercial building in Mundka in the evening of 13 May. (Photo by Rajat Gupta/EPA/EFE) 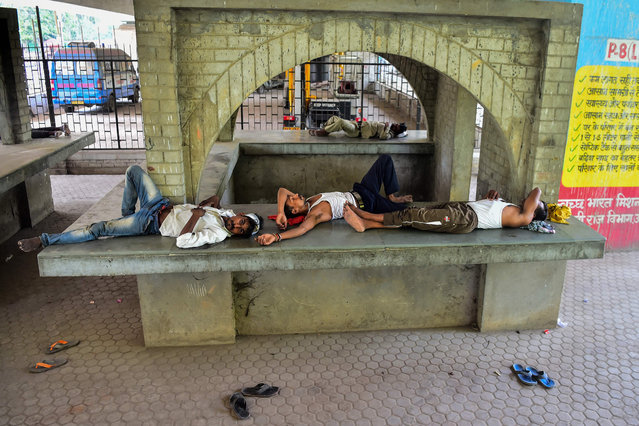 People rest under a bridge during a hot summer afternoon in Allahabad on May 14, 2022. (Photo by Sanjay Kanojia/AFP Photo) A resident peeks out of her house near the site of the commercial building that caught fire in New Delhi, India, May 14, 2022. (Photo by Anushree Fadnavis/Reuters) 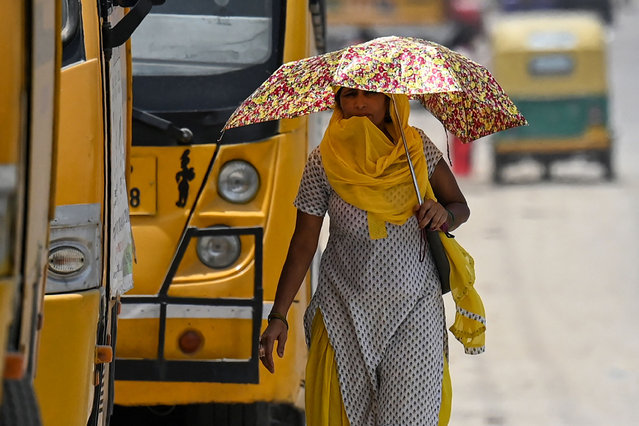 A woman uses an umbrella during a hot afternoon in New Delhi on May 15, 2022. (Photo by Money Sharma/AFP Photo) 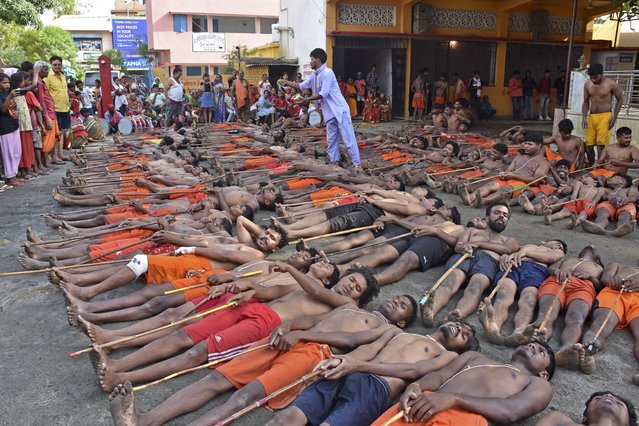 Tribal farmers perform a ritual as part of prayers for rain, prosperity and good health during the Manda Puja festival outside the Lord Shiva temple on the outskirts of Ranchi on May 16, 2022. (Photo by AFP Photo/Stringer) 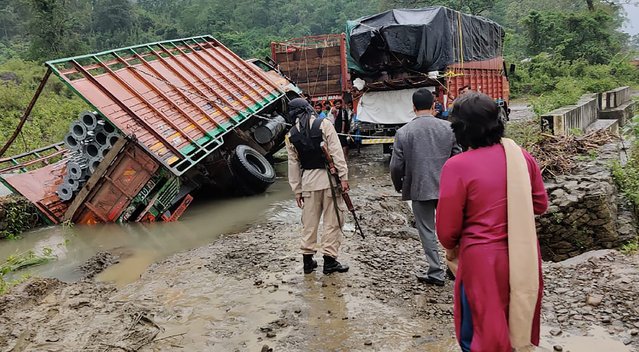 People inspect the area of a landslide after heavy rainfall in Dima Hasao district, in the northeastern Indian state of Assam, Monday, May 16, 2022. At least eight people have died in floods and mudslides triggered by heavy rains in India’s northeast region, officials said Tuesday. (Photo by Dima Hasao district administration via AP Photo) 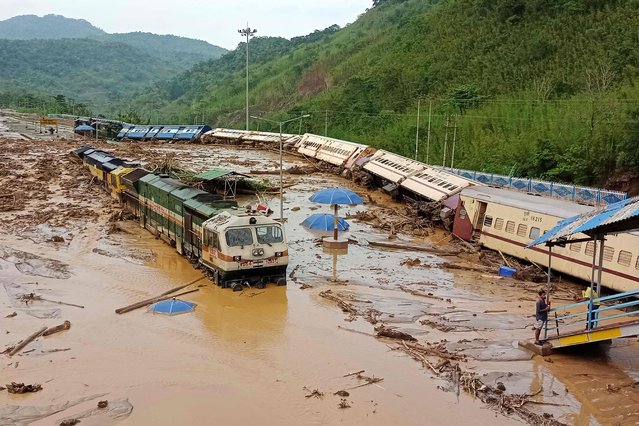 In this photograph taken on May 16, 2022, train carriages are seen toppled over following a landslide caused by a heavy rainfall at New Haflong railway station on the Lumding-Silchar route at Dima Hasao district, some 100 km from Silchar in Assam state. (Photo by AFP Photo/Stringer) 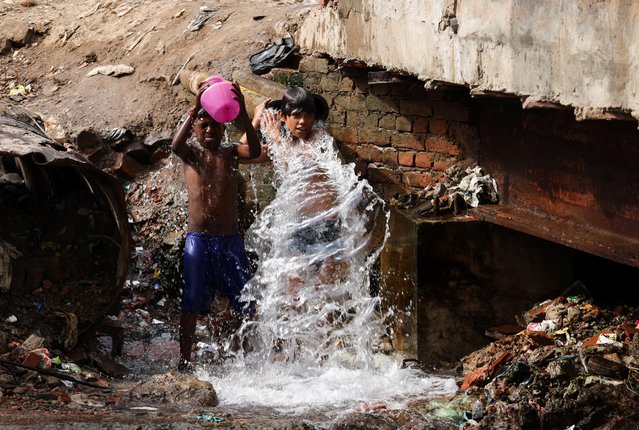 Boys cool off under a pipe of flowing water on a hot summer day in New Delhi, India, May 17, 2022. (Photo by Anushree Fadnavis/Reuters) 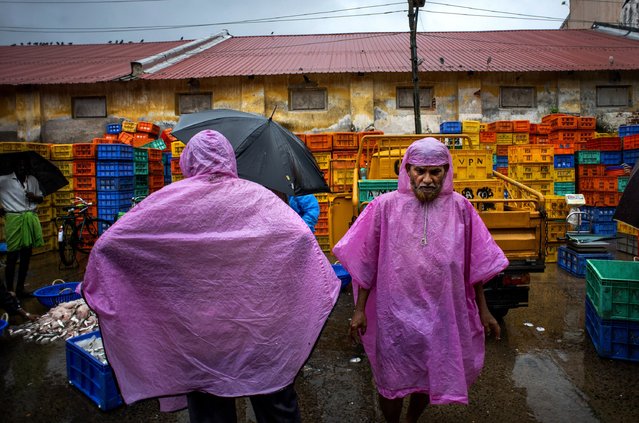 People work at a fish market in Kochi, Kerala state, India, Tuesday, May 17, 2022. India's Meteorological Department expects the southwest monsoon to arrive at country's southern coast ahead of its normal schedule this year. (Photo by R.S. Iyer/AP Photo) 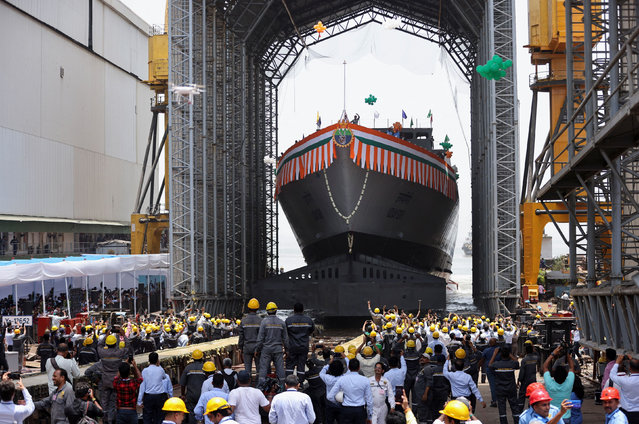 Workers wave during the launch of the second advanced stealth frigate warship under Project 17A named Udaygiri at the Mazagon Dock Shipbuilders Limited (MDL), in Mumbai, India, May 17, 2022. (Photo by Francis Mascarenhas/Reuters) 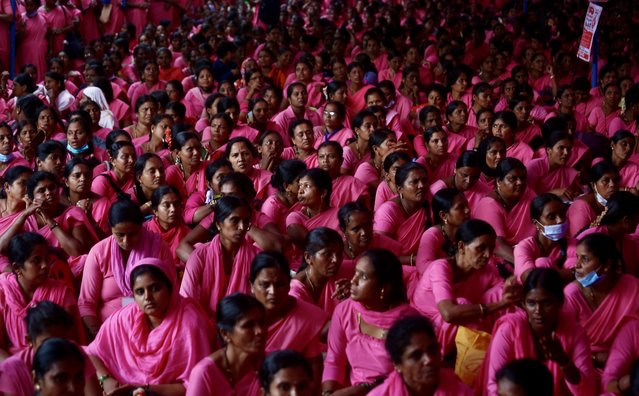 Members of All India United Trade Union Center (AIUTUC) and Accredited Social Health Activist (ASHA) workers take part in a protest in Bangalore, India, 17 May 2022. Over a thousand ASHA workers from different parts of the state took part in a protest demanding to include a fixed monthly honorarium of 149.48 euro and the delinking of the Reproductive Child Health (RCH) portal from ASHA Soft, the Centre’s online payment system for ASHA. (Photo by Jagadeesh N.V./EPA/EFE) 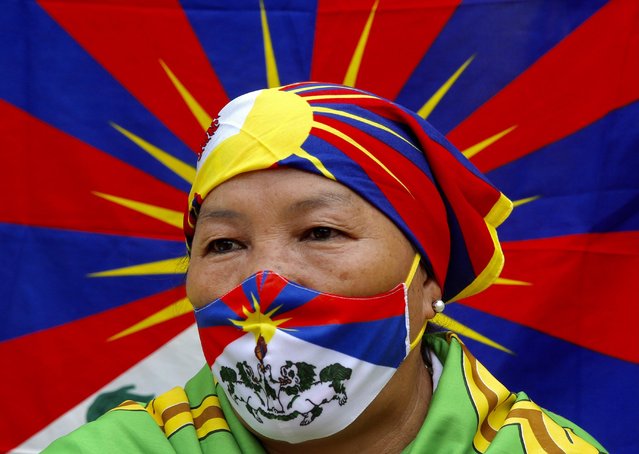 An exile Tibetan living in India takes part in a protest in Bangalore, India, 17 May 2022. Hundreds of Exile Tibetan protesters gathered to demand the immediate release of their religious leader Gedhun Choekyi Nyima, who went missing on 17 May 1995, shortly after his recognition as the 11th Panchen Lama by the 14th Dalai Lama. In Tibetan Buddhism, the Panchen Lama is considered the second most important spiritual leader after the Dalai Lama. (Photo by Jagadeesh N.V./EPA/EFE) 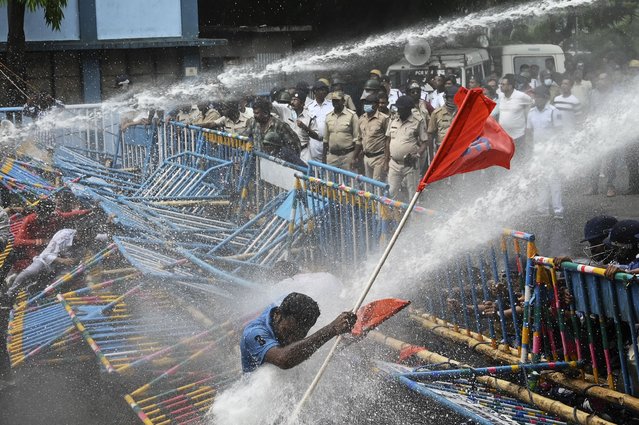 Police use a water canon to disperse activists of the Akhil Bharatiya Vidyarthi Parishad (ABVP), the students wing of the Bharatiya Janata Party (BJP), during a protest against West Bengal's state government over alleged irregularities in the Staff Selection Commission (SSC) recruitment process, in Kolkata on May 18, 2022. (Photo by Dibyangshu Sarkar/AFP Photo) 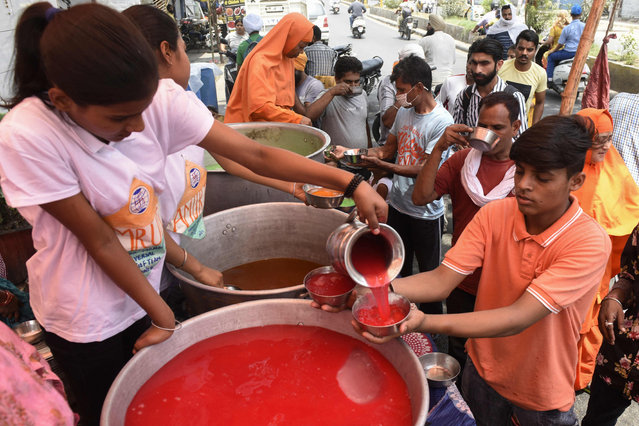 Volunteers dristribute cold sweet drinks to people during a hot summer day in Amritsar on May 18, 2022. (Photo by Narinder Nanu/AFP Photo) 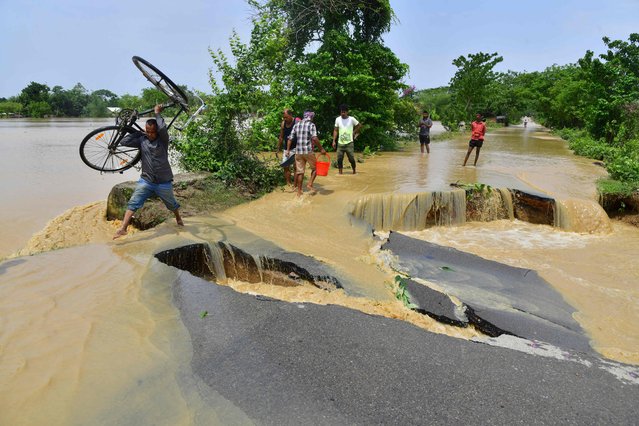 A man carrying his bicycle wades along a partially damaged road due to flooding after unusually heavy rains in Nagaon district, Assam state, on May 19, 2022. (Photo by Biju Boro/AFP Photo) 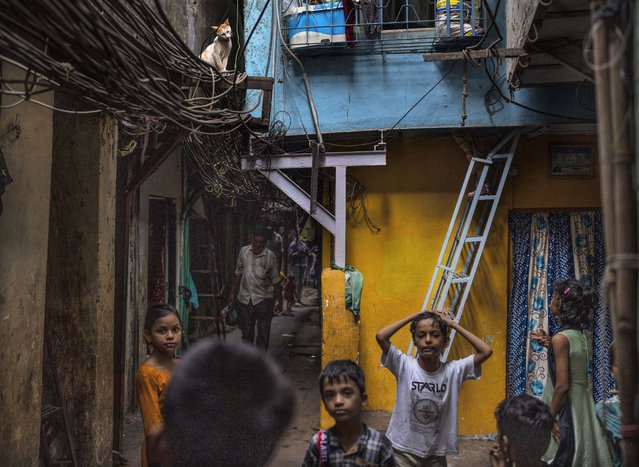 A cat sits on overhanging cables as children play in a narrow lane at a slum in Dharavi, Mumbai, India, Thursday, May 19, 2022. (Photo by Rafiq Maqbool/AP Photo) 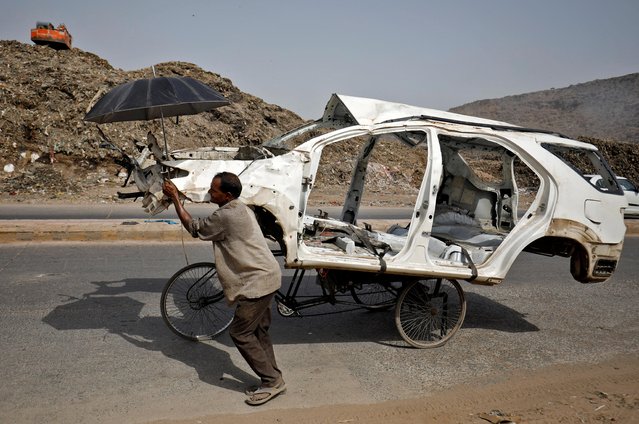 A man uses an umbrella for shade as he carries a dismantled car on a cycle rickshaw to a scrapyard on a hot weather day on the outskirts of Ahmedabad, India, May 19, 2022. (Photo by Amit Dave/Reuters)
Edit Del
23 May 2022 04:50:00, post received 0 comments
Publication archive:
←   →
Popular tags:
All tags
Last searches: