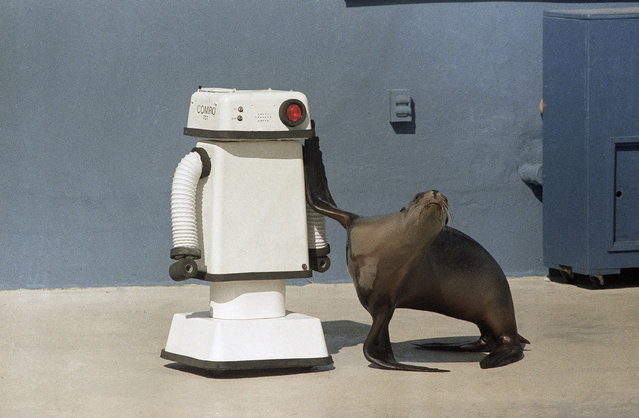 A robot, controlled by senior trainer Guenter Skammel, puts Gigi, a 3-yr. old sea lion, through a series of responses to the movements of the robot on October 16, 1984. (Photo by Richard Drew/AP Photo) 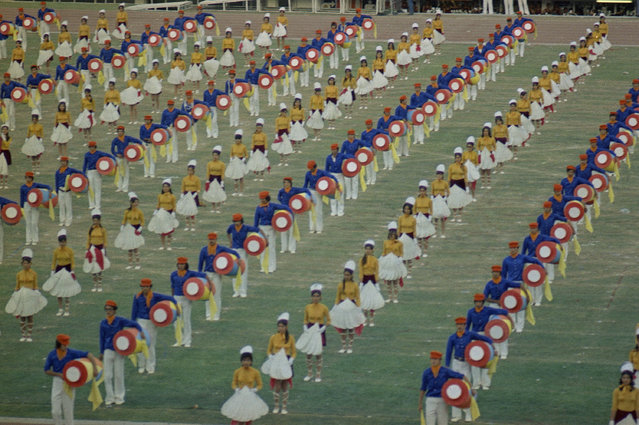 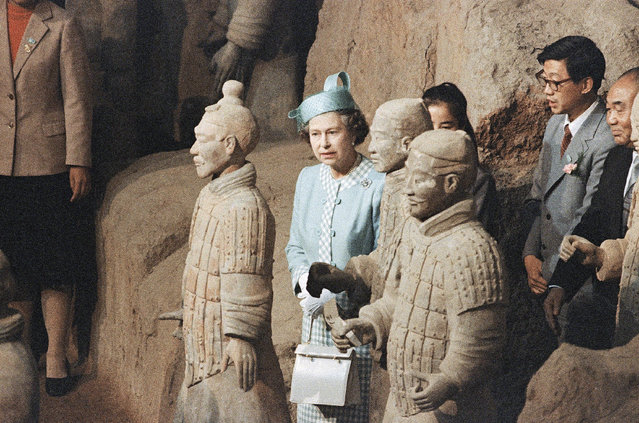 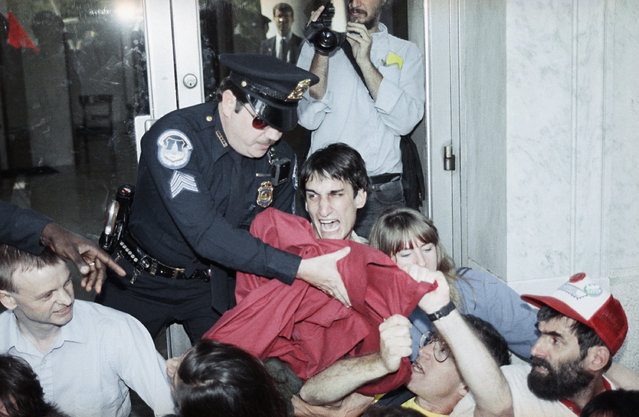 U.S. Capital Police take a banner away from a protester on Monday, October 16, 1989 as demonstrators attempted to block a Capitol Hill congressional office building in protest of U.S. military aid to El Salvador. Forty one of the demonstrators were arrested at the protest. (Photo by Rick Bowmer/AP Photo) 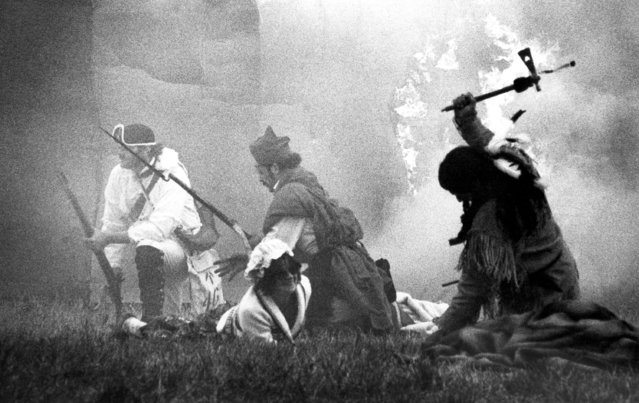 Amid smoke from musket volleys and burning buildings, Seneca Indians and Tories press the attack in a re-enactment of the 200th anniversary of the Cherry Valley massacre of 1778 in Cherry Valley, New York, October 16, 1978. The original raid on this Mohawk Valley village occurred in November but local officials moved the re-enactment up in hopes of favorable weather. They got heavy rain and snow. (Photo by AP Photo) 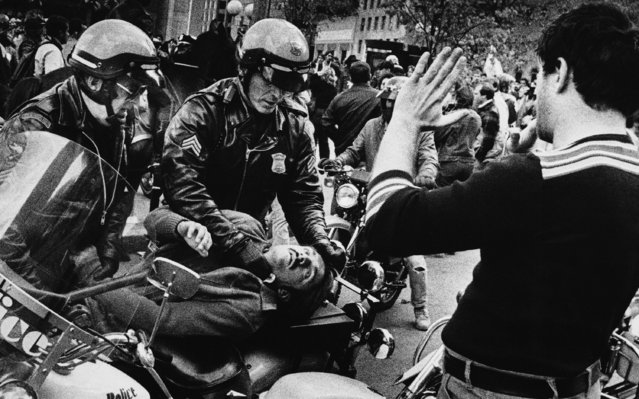 Helmeted Boston police officers work to restrain an unidentified man at Boston's City Hall Plaza on October 16, 1982 as an onlooker holds up his hands after demonstrators clashed with police during a Ku Klux Klan rally. (Photo by Bill Polo/AP Photo) 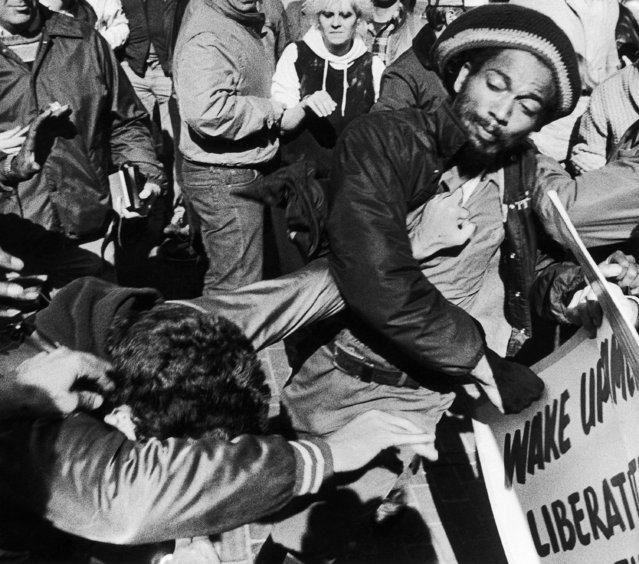 Two unidentified men mix it up in what was described as an isolated incident when the two men began fighting prior to the scheduled arrival of a Ku Klux Klan contingent which drew a crowd of demonstrators in City Hall Plaza in Boston, Saturday, October 16, 1982. (Photo by Bill Polo/AP Photo) 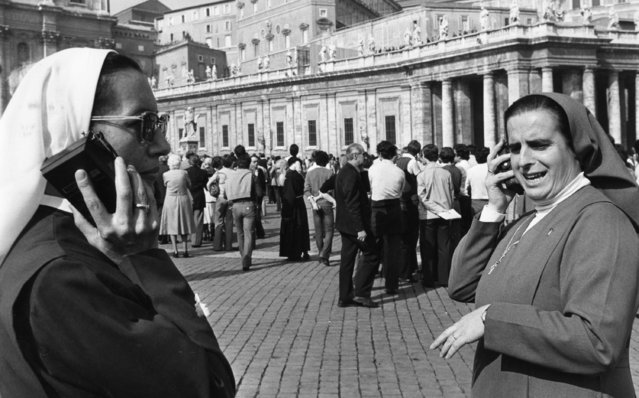 Two nuns with their transistor radios listening to the Vatican radio station October 16, 1978 to get the final confirmation that today's smoke out of the Sistine Chapel again indicated that no new Pope has been found by the conclavists after the sixth balloting. (Photo by AP Photo) 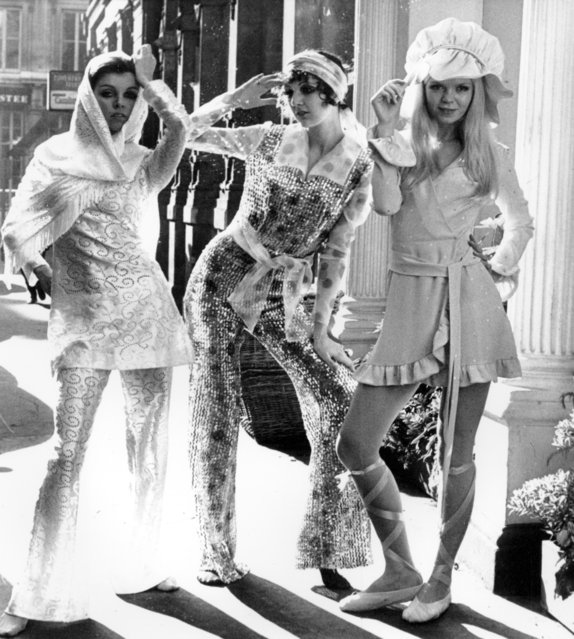 Models pose in designs from May Quant's collection on a street in London, England, on October 16, 1969. Grania, left, wears the "Shimmy Shimmy," a white rayon dress over matching pants with a shawl. Baba, center, wears "Razzamatazz," a jumpsuit featuring plastic sequins in blue, silver and red on nylon. Linda wears "Muffit," a pink minidress with an old English style floppy mobcap. (Photo by AP Photo) 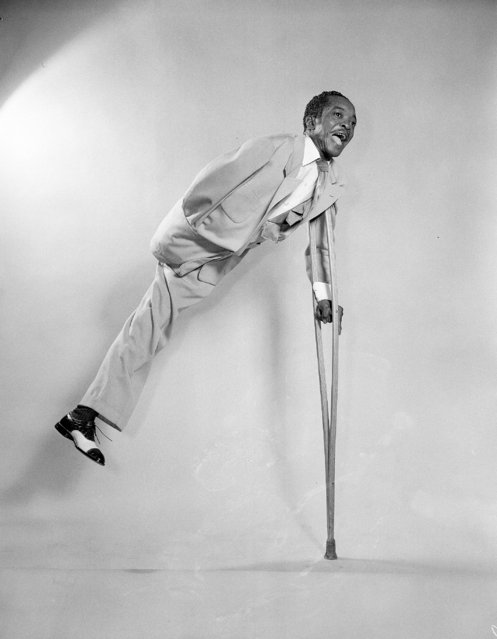 Crip Heard, one-armed and one-legged artist of the dance, takes off with the aid of his crutch, Los Angeles, October 16, 1952. (Photo by Don Brinn/AP Photo) 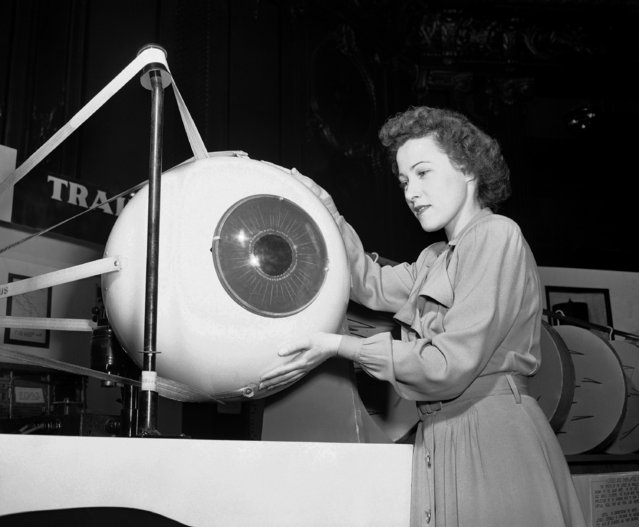 Alice Jusczynski of Chicago looks over a model of the mechanical eyeball, used in medical instruction by the USAF School of Aviation and Medicine at Randolph Field, Texas, October 16, 1948. Made of plastic, it can be operated to demonstrate the muscles which move in the eye. It was one of the exhibits at the 53rd annual meeting of the American Society of Ophthalmology and Otolaryngology in Chicago. (Photo by Edward Kitch/AP Photo) 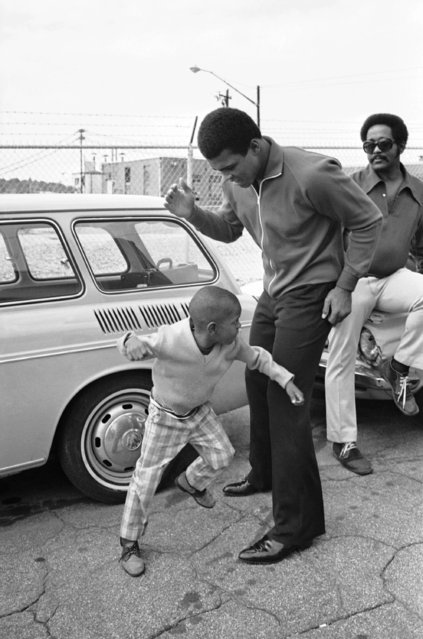 Former heavyweight champion Muhammad Ali spars fun with 6-year-old Henry Joyner after working out in Atlanta on October 16, 1970. Muhammad Ali meets Jerry Quarry in a 15-round non-title fight on October 26 in Atlanta. Ali won his heavyweight title under the name of Cassius Clay. (Photo by AP Photo) 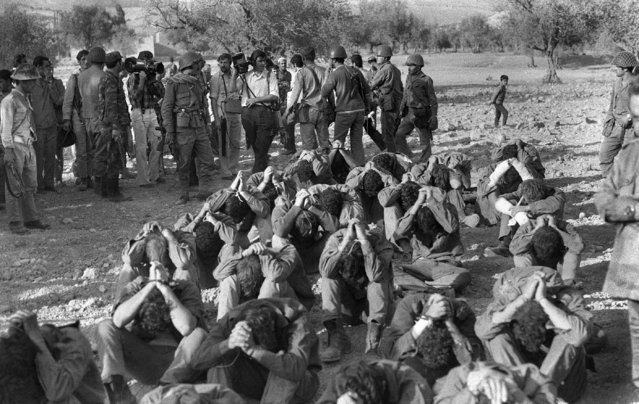