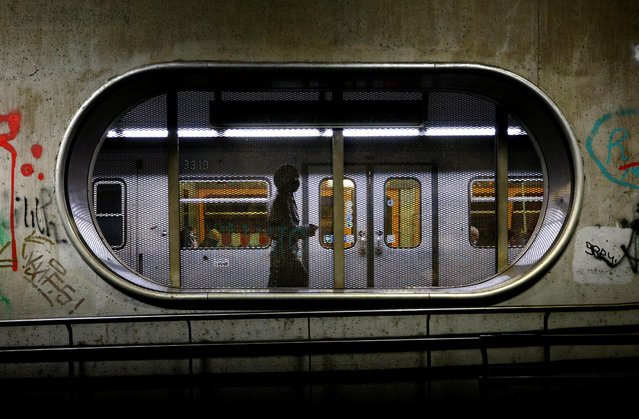 A woman wearing a protective mask walks along an underground platform during the second lockdown as the coronavirus disease continues in Vienna, Austria, November 12, 2020. (Photo by Lisi Niesner/Reuters) 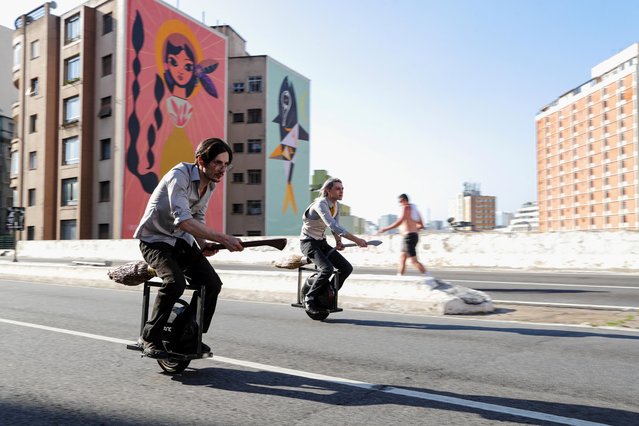 On a recent Saturday, November 7, 2020, Vinícius Sanctus, 39, and Alessandro Russo, 28, could be seen coasting down the Sao Paulo's main thoroughfares on a pair of broomsticks, each one attached to a single motorized wheel. The Brazilian duo have created contraptions that look uncannily like the brooms used by witches and wizards in the Harry Potter universe. (Photo by Amanda Perobelli/Reuters) 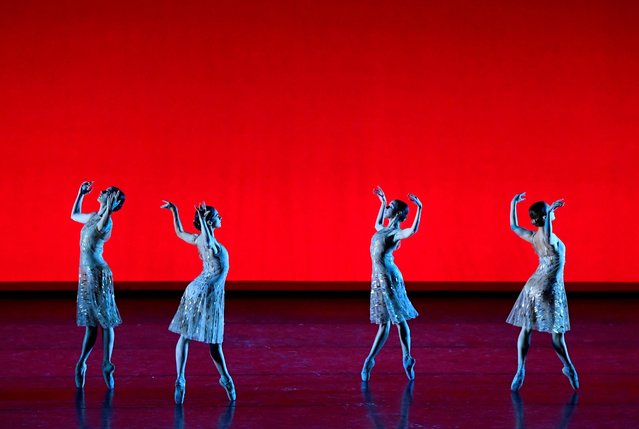 Members of The Royal Ballet perform in “The Royal Ballet: Live, Within the Golden Hour”, a live streamed performance broadcast at the Royal Opera House, London, Britain, November 12, 2020. (Photo by Toby Melville/Reuters) 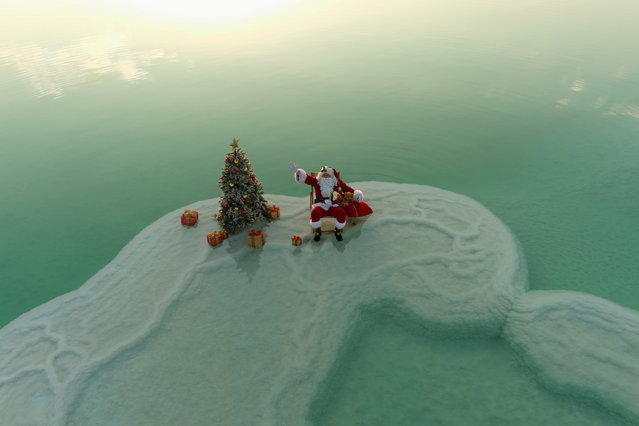 An aerial view shows Issa Kassissieh, wearing a Santa Claus costume, and sitting next to a Christmas tree while posing for a picture on a salt formation in the Dead Sea, in an event organised by Israel's tourism ministry, as Israel gears up for the holiday season, amid the coronavirus disease (COVID-19) crisis, near Ein Bokeq, Israel on November 15, 2020. (Photo by Ilan Rosenberg/Reuters) 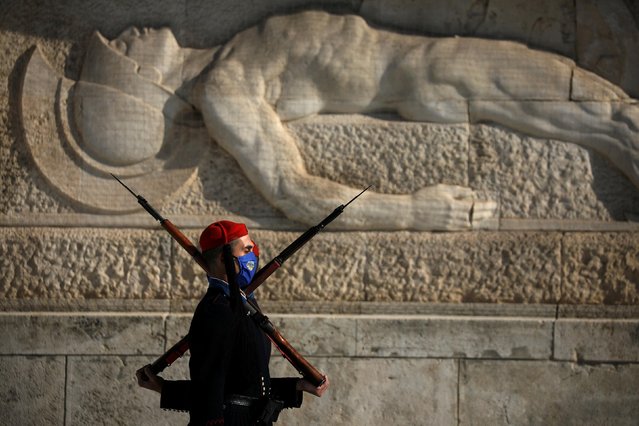 Greek Presidential Guards wearing protective face masks perform their sentry duty in front of the Tomb of the Unknown Soldier, after the Greek government imposed a nationwide lockdown to contain the spread of the coronavirus disease (COVID-19), in Athens, Greece, November 16, 2020. (Photo by Alkis Konstantinidis/Reuters) 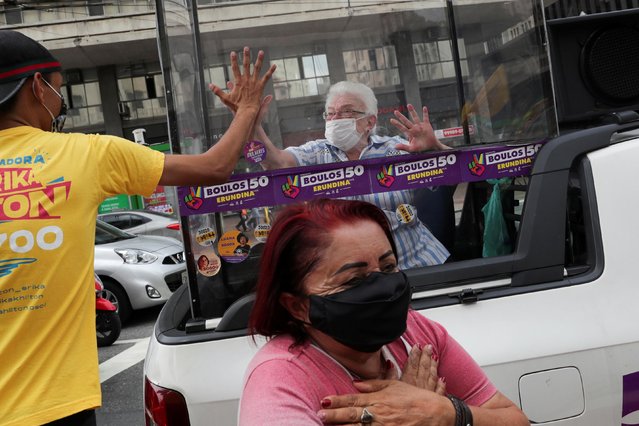 Luiza Erundina, 85, leftist Guilherme Boulos's candidate for vice-mayor, holds her hand to a man's from inside the “cata voto” (Vote Catcher), a car with a plastic booth to protect herself from the coronavirus disease (COVID-19) during the campaign in Sao Paulo, Brazil on November 13, 2020. (Photo by Amanda Perobelli/Reuters) 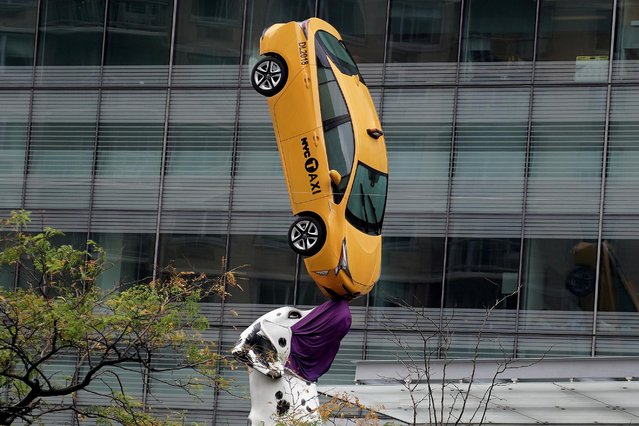 A sculpture called “Dalmation” balances a taxi on its nose while wearing a face covering during the coronavirus disease (COVID-19) pandemic in the Manhattan borough of New York City, New York, U.S., November 13, 2020. (Photo by Carlo Allegri/Reuters) 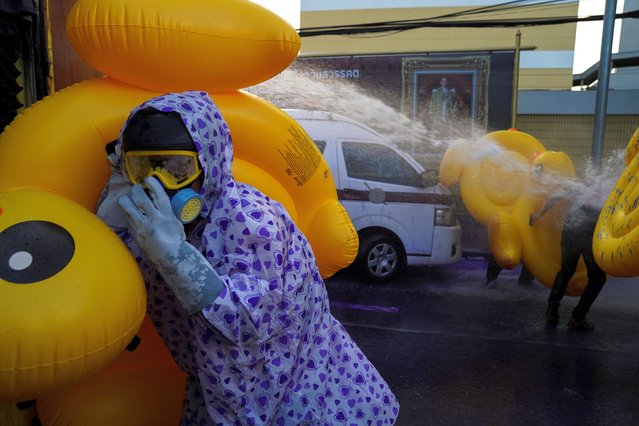 Demonstrators use inflatable rubber ducks as shields to protect themselves from water cannons during an anti-government protest as lawmakers debate constitution change, outside the parliament in Bangkok, Thailand, November 17, 2020. (Photo by Athit Perawongmetha/Reuters) 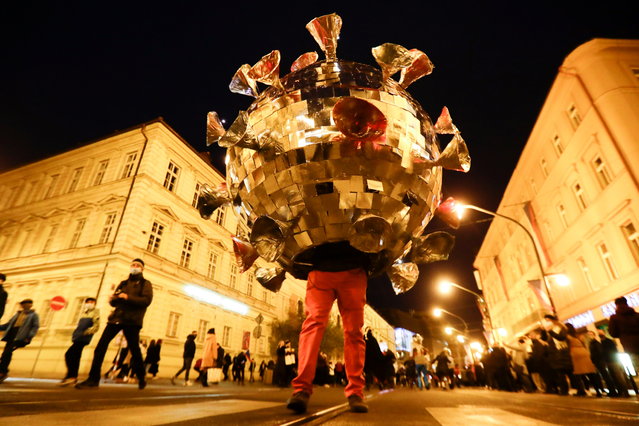 A man wears a Covid-19 costume as people protest against restrictions due to the coronavirus disease (COVID-19) during the commemoration of the 31st anniversary of the 1989 Velvet Revolution, in Prague, Czech Republic, November 17, 2020. (Photo by David W. Cerny/Reuters) 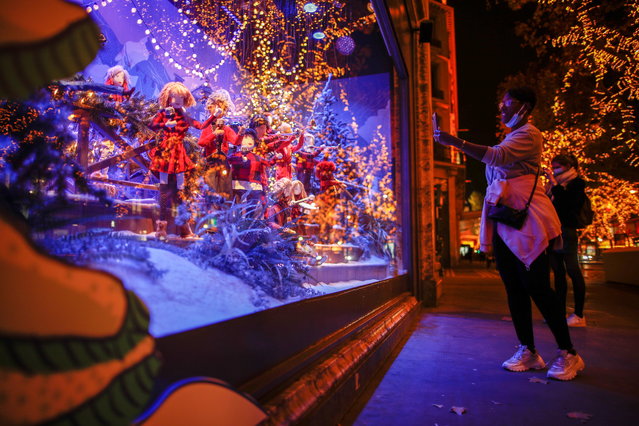 A woman takes a picture of a window display at the Printemps department store where lights are switched on for the Christmas season in Paris, France, November 17, 2020. (Photo by Benoit Tessier/Reuters) 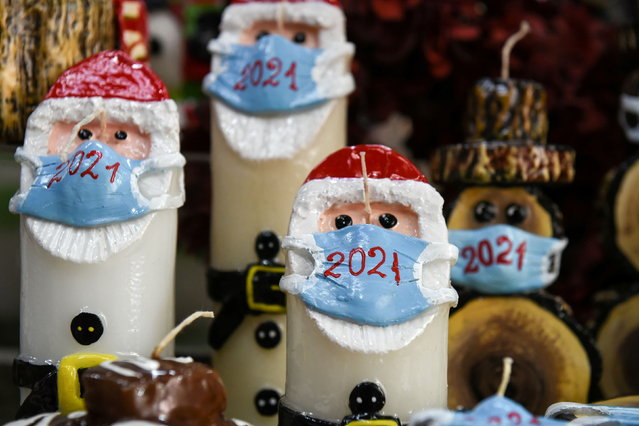 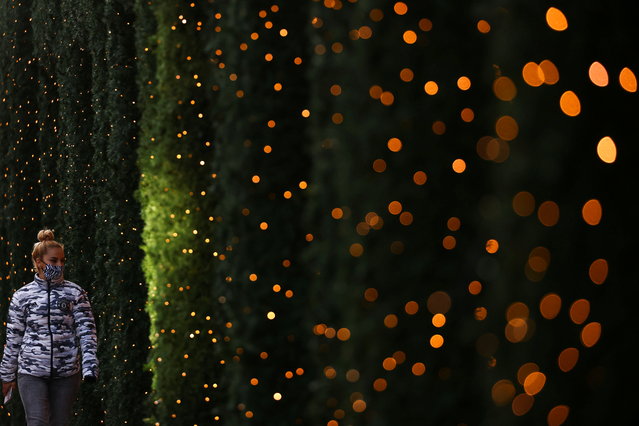 A pedestrian walks near Christmas lights at Oxford Street amid the coronavirus disease (COVID-19) outbreak in London, Britain, November 19, 2020. (Photo by Simon Dawson/Reuters) 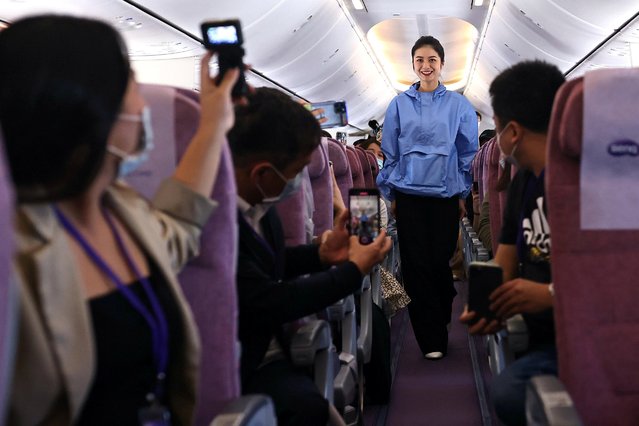 A flight attendant wearing an Xpore top designed for safe traveling, walks the catwalk during a sightseeing flight, amid the spread of the coronavirus disease (COVID-19), in Taipei, Taiwan on November 19, 2020. (Photo by Ann Wang/Reuters) 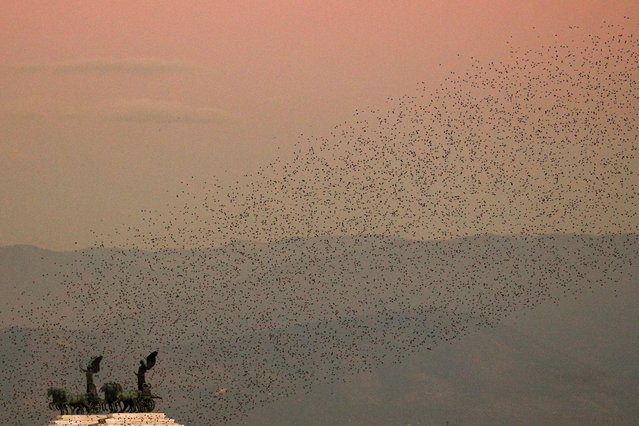 Murmuration of starlings float over the Vittoriano monument as the sun sets in Rome, Italy, November 18, 2020. (Photo by Guglielmo Mangiapane/Reuters) 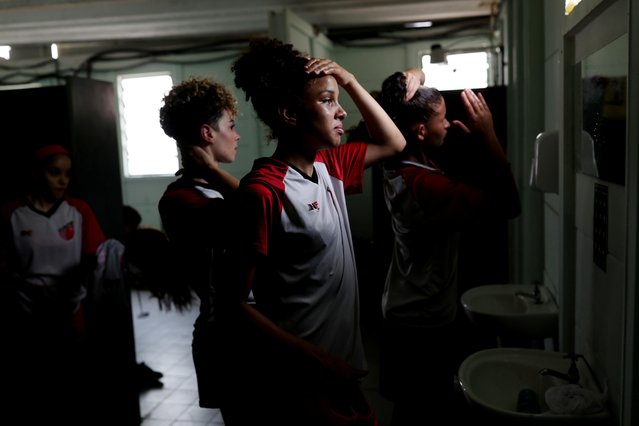 Taboao da Serra's Geovana Mendes and teammates look dejected in the dressing room after their 16-0 loss against Palmeiras in Vinhedo, Brazil, November 11, 2020. When the team lost a league match 29-0 last month it looked like things could hardly get much worse for the small club based outside Sao Paulo. They also lost their next three games 14-0, 10-0 and 16-0 and were eliminated from the Sao Paulo state championship at the group stage. The results sparked yet another debate about the competitiveness of the women's game in Brazil. The backlash – and of course the sexist ridicule – was even more predictable. When we lost “they said it looks like the whole team has COVID-19, don't bother playing, those kind of things, you know”, said captain Lohane Ferreira. (Photo by Amanda Perobelli/Reuters) 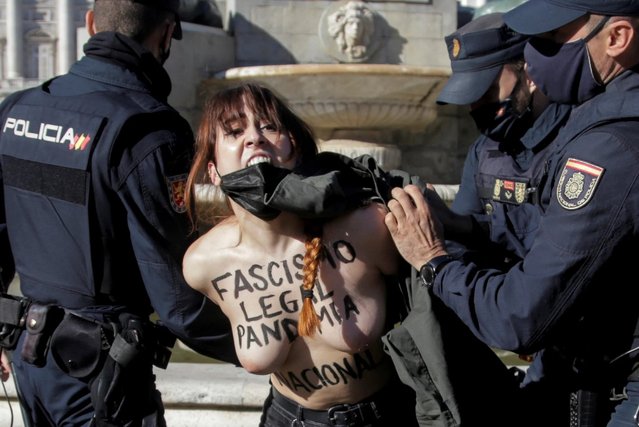 Police officers detain a Femen activist during a demonstration of supporters of former Spanish dictator Francisco Franco, during annual gathering held on the week of the 45th anniversary of the dictator's death, in Madrid, Spain, November 22, 2020. (Photo by Javier Barbancho/Reuters) 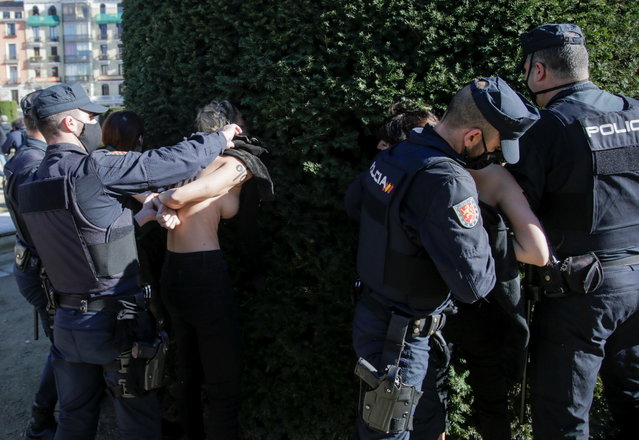 Police officers detain Femen activists during a demonstration of supporters of former Spanish dictator Francisco Franco, during annual gathering held on the week of the 45th anniversary of the dictator's death, in Madrid, Spain, November 22, 2020. (Photo by Javier Barbancho/Reuters) 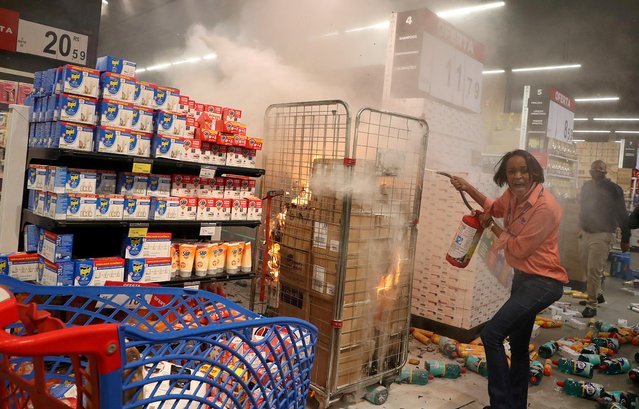 A woman puts out a fire at a vandalized Carrefour store during a march in Sao Paulo, Brazil on National Black Consciousness Day and in protest against the death of Joao Alberto Silveira Freitas, November 20, 2020. Protests were sparked across Brazil after security guards beat Joao Alberto Silveira Freitas, a 40-year-old Black man, to death at a Carrefour Brasil supermarket in the southern Brazilian city of Porto Alegre. (Photo by Amanda Perobelli/Reuters) 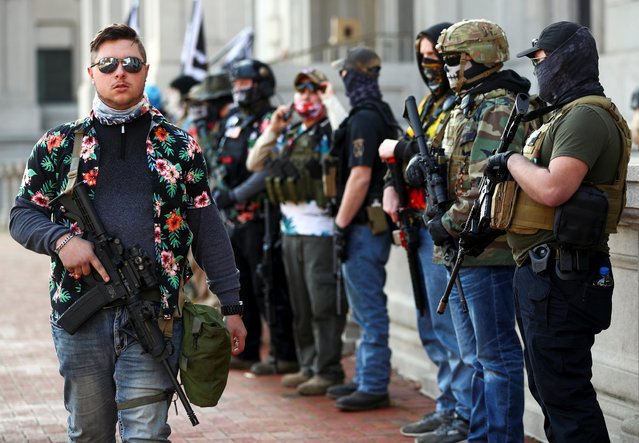 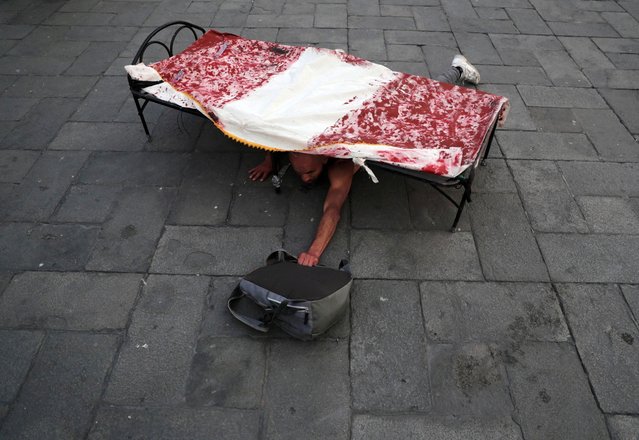 A performer reaches for a backpack while lying underneath a metal frame covered with a sheet representing the national flag, during a demonstration against Congress and for a change in the country's constitution, in Lima, Peru on November 21, 2020. (Photo by Sebastian Castaneda/Reuters)
Edit Del
19 Feb 2021 09:15:00, post received 0 comments
Publication archive:
←   →
Popular tags:
All tags
Last searches: