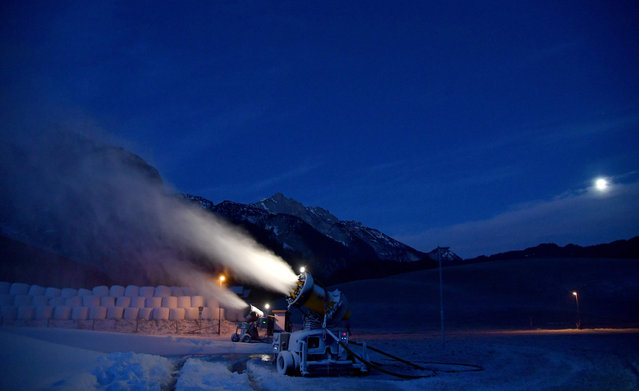 Cannon blow snow on to the slopes in the ski resort in Abtenau, Austria on December 1, 2020. Germany is seeking an EU-wide ban on ski tourism over Christmas to halt coronavirus transmissions. (Photo by Barbara Gindl/APA/AFP Photo) 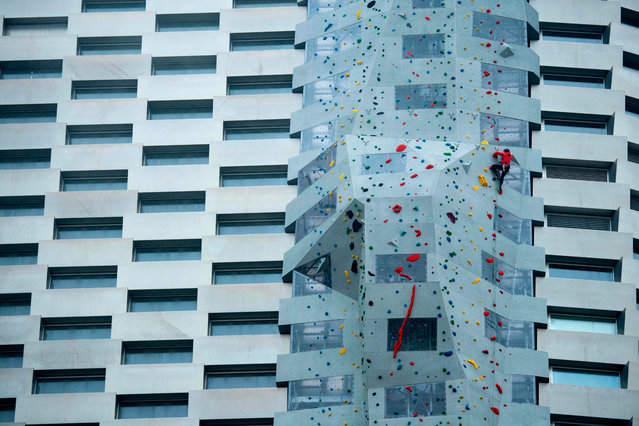 Danish climbers Michael Hjorth and Mikkel Frederiksen are on the 85m long climbing wall at the outdoor structure CopenHill in Copenhagen on December 6, 2020. CopenHill is an urban mountain placed on top af a state-of-the-art waste-to energy plant, ARC, which is one of the most unique architectural designs in the world. The plant produces environmental-friendly energy with the newest technology by burning waste and turning the exhaust into energy which yearly provides the city of Copenhagen with electricity for 30,000 households and central heating for 72,000 households The structure has a ski hill, a hiking track and a climbing wall. (Photo by Olivier Morin/AFP Photo) 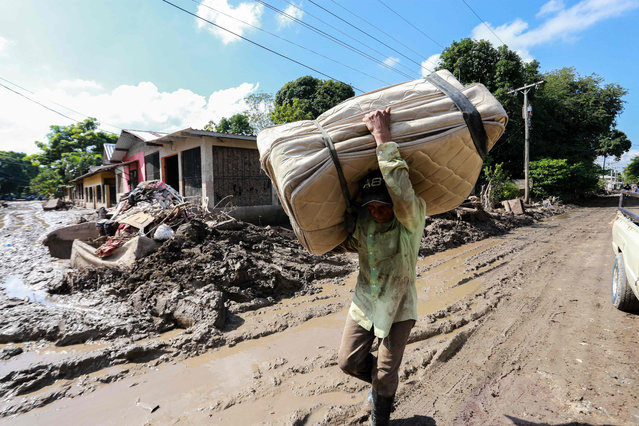 A local resident, victim of tropical storms Eta and Iota, carries a matress along a street covered in mud during a visit of Queen Letizia of Spain (not depicted) in the community of Flores de Oriente, La Lima municipality, Cortes department, in northern Honduras on December 15, 2020. Queen Letizia is in the country on an official two-day visit to learn about the effects left by tropical storms Eta and Iota and deliver the first part of a 120-ton donation for the affected to cope with the situation. (Photo by Wendell Escoto/AFP Photo) 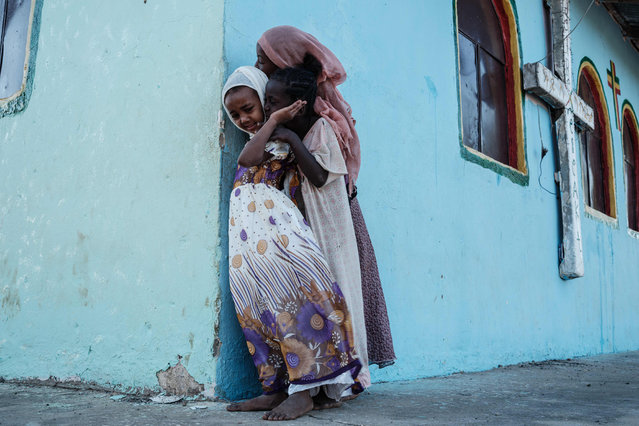 Children peek from behind the corner of a church building built by former Ethiopian refugees, as local and refugee worshippers attend Sunday Mass at the village next to Um Raquba refugee camp in Gedaref, eastern Sudan, on December 6, 2020. (Photo by Yasuyoshi Chiba/AFP Photo) 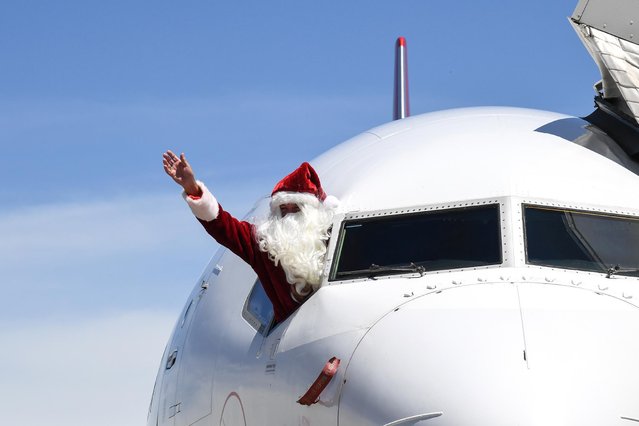 Qantas Captain Steve Anderson dressed as Santa Claus waves from the cockpit of his Boeing 737 aircraft at Brisbane Airport before departing to Mackay on December 16, 2020 in Brisbane, Australia. Captain Anderson has been flying for Qantas for 41 years and has spent more than half of those years flying as Santa Claus during the festive season. The Australian airline has increased domestic flights to around 70% of pre Covid-19 capacity in time for reunions between families and loved ones. Santa Claus will be in command of a number of flights across the next week around Australia including Christmas Day. (Photo by James D. Morgan/Getty Images) 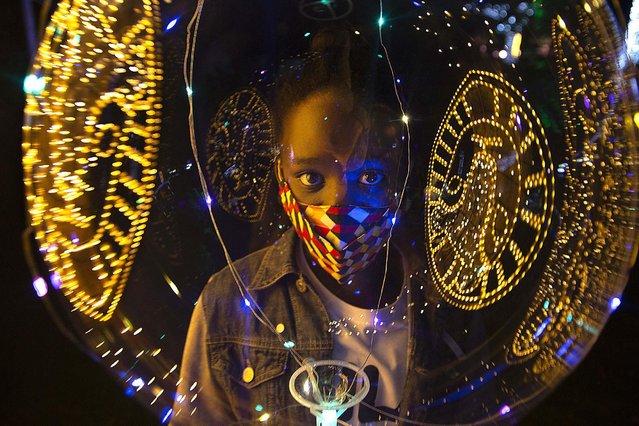 Christmas lights are reflected on a ballon as a child wears a face mask to protect against coronavirus at the Johannesburg Zoo's Festival of Lights Tuesday December 1, 2020. (Photo by Denis Farrell/AP Photo) 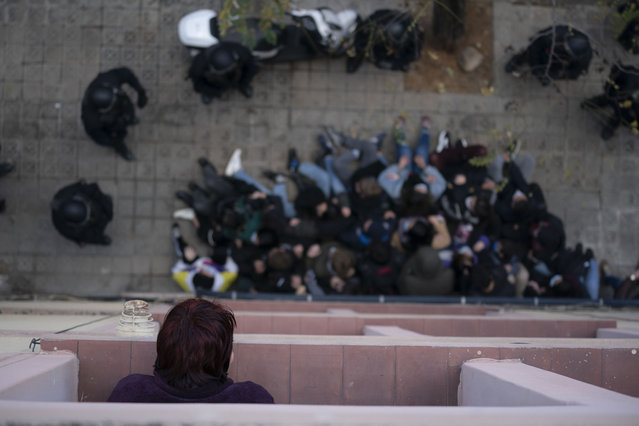 A woman looks from her window at police officers surround activists who try to stop the eviction of Alejandro Ibañez Maltes, 30, from his apartment in Barcelona, Spain, Thursday, December 10, 2020. Alejandro has been accused of not making rent payments and not renewing his lease since February of 2020. (Photo by Joan Mateu/AP Photo) 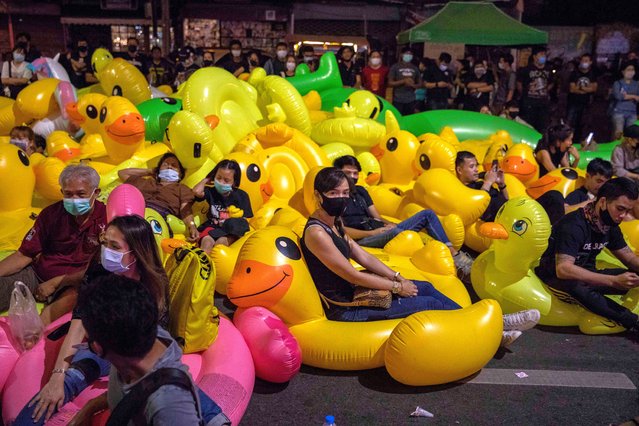 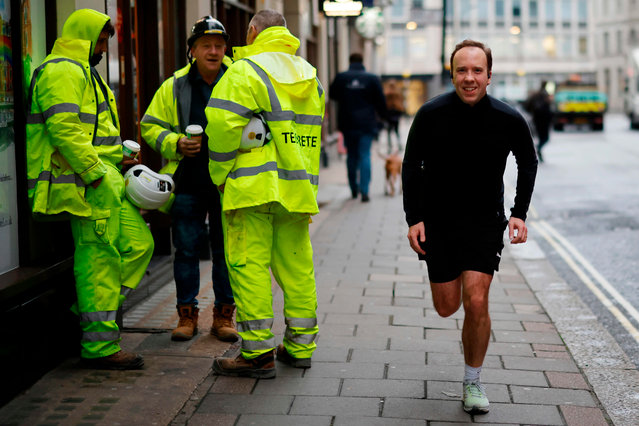 Britain's Health Secretary Matt Hancock poses running past photographers whilst out for a morning jog in Westminster central London on December 4, 2020. (Photo by Tolga Akmen/AFP Photo) 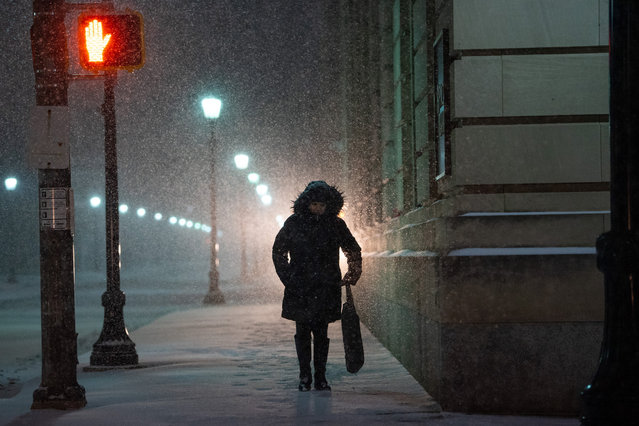 Car headlights illuminate a woman walking through city streets as snow accumulates on December 16, 2020 in Wilkes Barre, Pennsylvania. Winter Storm Gail is expected to bring more than a foot of snow in parts of the Northeast. (Photo by Mark Makela/Getty Images) 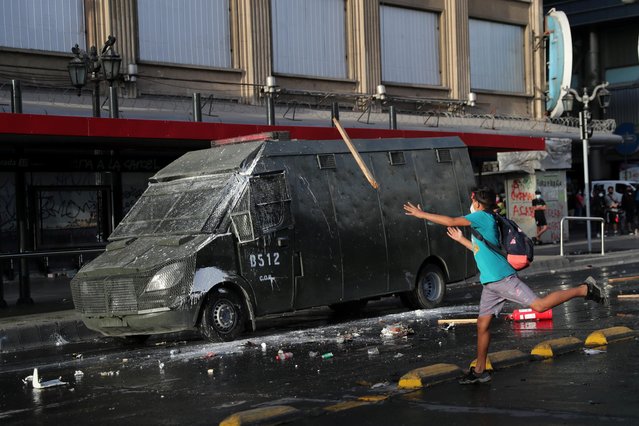 A demonstrator throws a wood stick toward a riot police vehicle during a protest against Chile's President Sebastian Pinera and his government, during Pinera's birthday, in Santiago, Chile on December 1, 2020. (Photo by Ivan Alvarado/Reuters) 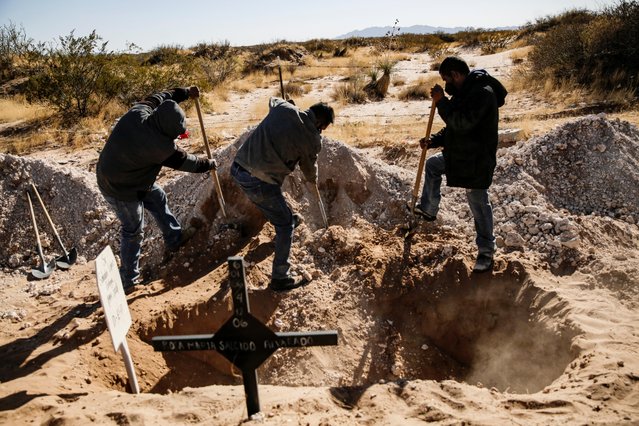 Cemetery workers bury the coffin, that contains the body of a man who died of the coronavirus disease (COVID-19), at the San Rafael Cemetery, in Ciudad Juarez, Mexico on December 2, 2020. (Photo by Jose Luis Gonzalez/Reuters) 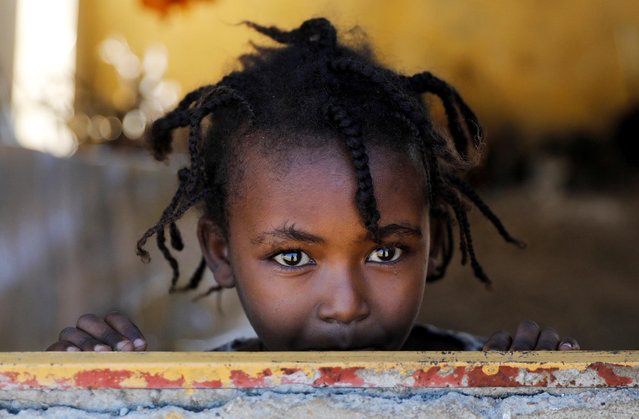 An Ethiopian girl stands at the window of a temporary shelter at the Village 8 refugees transit camp, which houses Ethiopian refugees fleeing the fighting in the Tigray region, near the Sudan-Ethiopia border, Sudan, December 2, 2020. A month of war in Ethiopia is feared to have killed thousands of people and has forced refugees to flee along corpse-strewn roads. More than 45,000 refugees have crossed into neighboring Sudan, while many more have been displaced within Tigray. (Photo by Baz Ratner/Reuters) 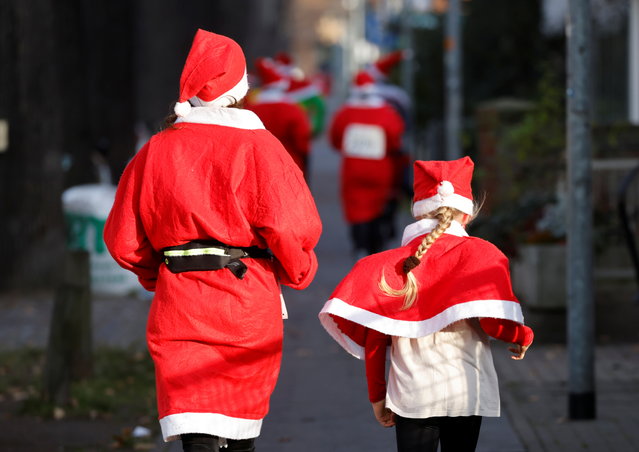 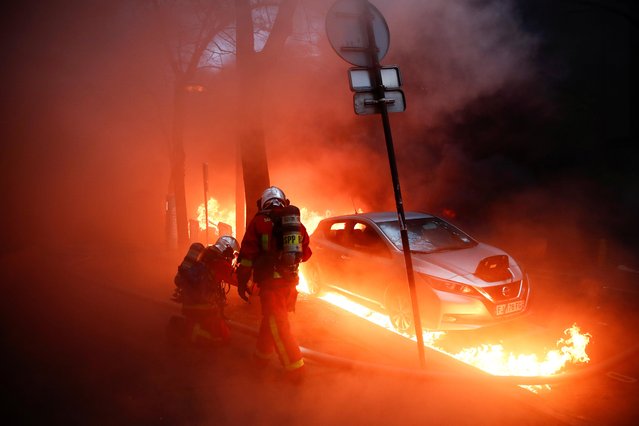 Firefighters work next to a car surrounded by flames during a protest against the “Global Security Bill”, that right groups say would make it a crime to circulate an image of a police officer's face and would infringe journalists' freedom in the country, in Paris, France, December 5, 2020. (Photo by Gonzalo Fuentes/Reuters) 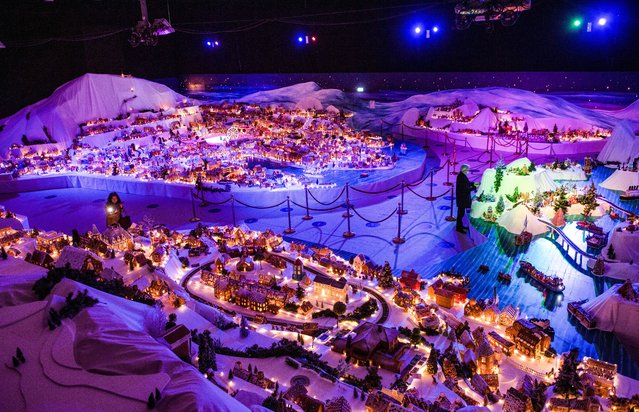 The Gingerbread Town, an annual pre-Christmas tradition consisting of miniature houses, trains, cars and ships, made from gingerbread, is pictured in Bergen, Norway on December 8, 2020. (Photo by Marit Hommedal/NTB via Reuters) 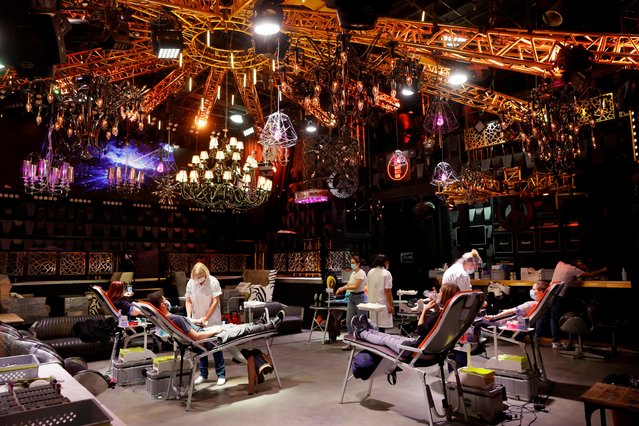 People give blood on the stage of the closed MAD (Moulin a Danse) night club during the outbreak of the coronavirus disease (COVID-19) in Lausanne, Switzerland, December 7, 2020. (Photo by Denis Balibouse/Reuters) 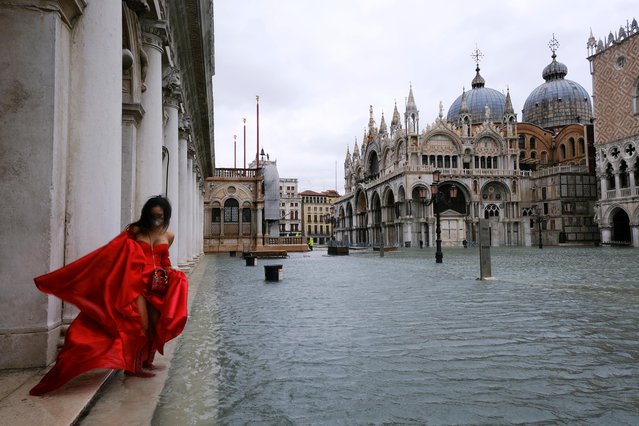 A woman stands in flooded St. Mark's Square during high tide as the flood barriers known as Mose are not raised, in Venice, Italy, December 8, 2020. The system of 78 flood gates, known as Mose, guard the entrance to the Venetian lagoon and are designed to protect the city from tides of up to 10ft (3 metres). However, they require 48-hours notice to be activated. (Photo by Manuel Silvestri/Reuters) 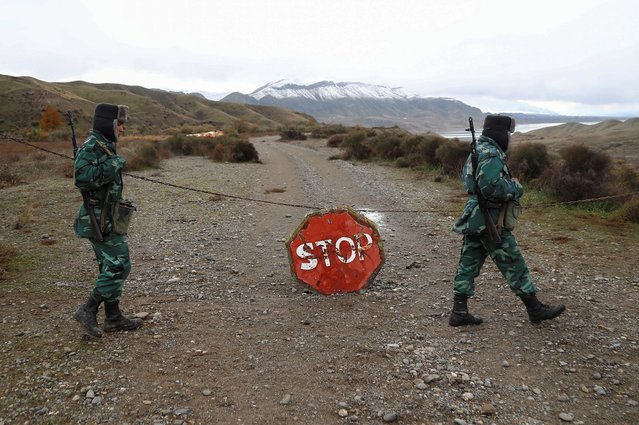 Azeri service members guard the area, which came under the control of Azerbaijan's troops following a military conflict over Nagorno-Karabakh against ethnic Armenian forces and a further signing of a ceasefire deal, on the border with Iran in Jabrayil District, December 7, 2020. (Photo by Aziz Karimov/Reuters) 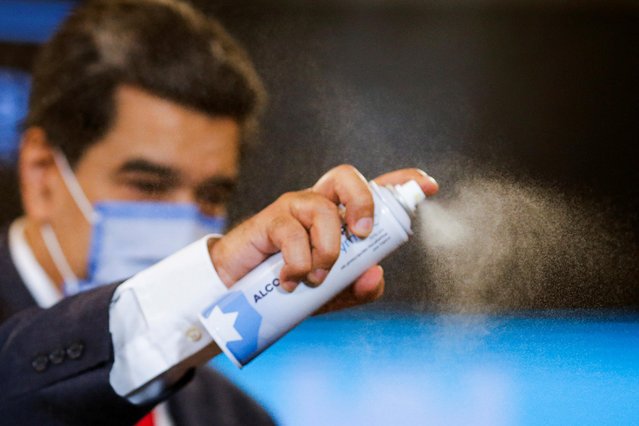