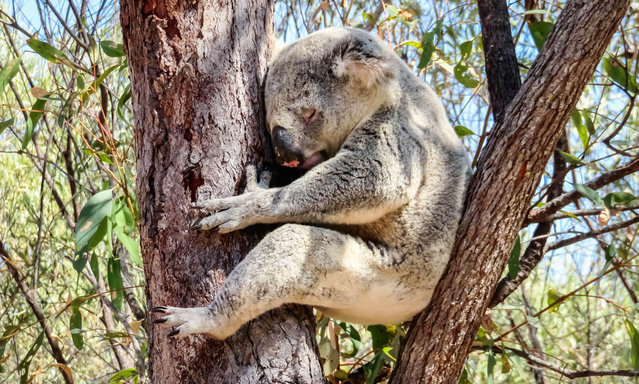 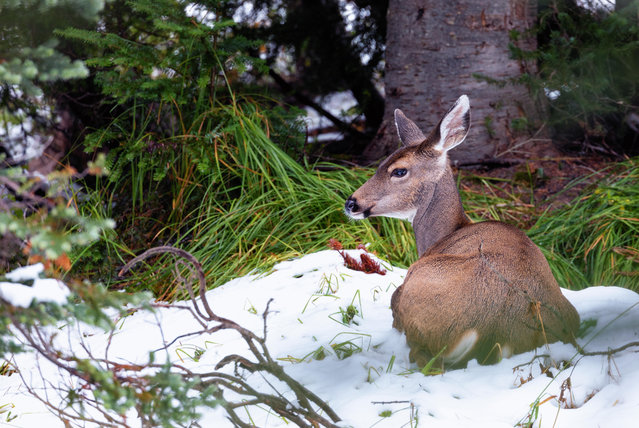 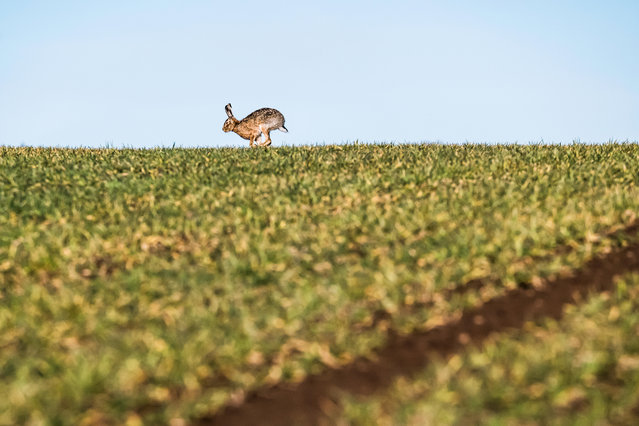 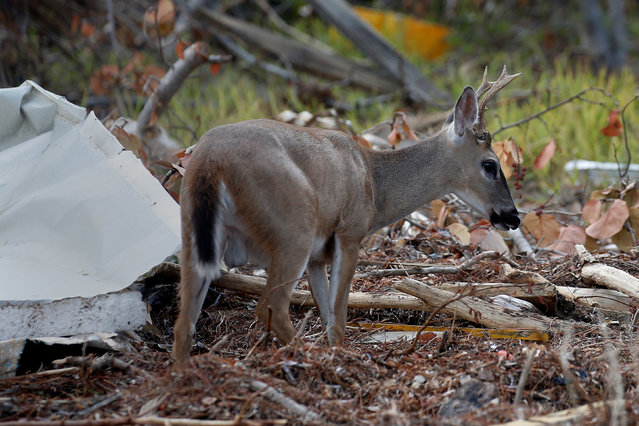 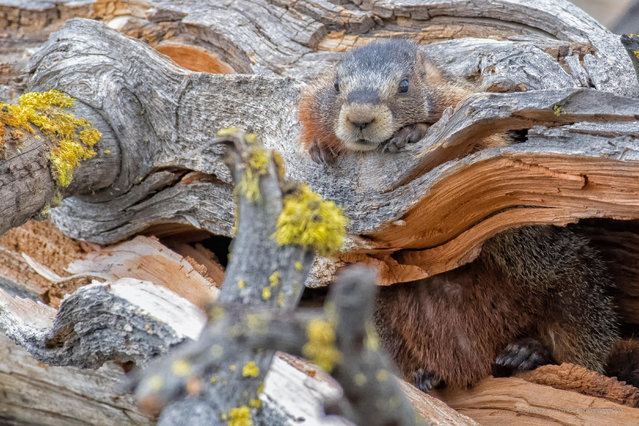 A marmot peeks out from a hole in a log, Grand Teton national park, US. (Photo by Bill Sincavage/Alamy Stock Photo) 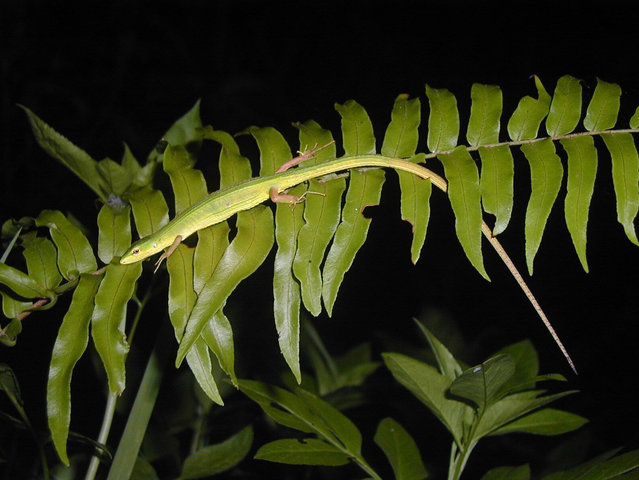 This undated photo released by International Union for the Conservation of Nature (IUCN) shows a Miyako grass lizard. The global conservation group IUCN’s update issued Tuesday, December 5, 2017, mostly includes news of grave threats to many species, much of it caused due to loss of habitat and unsustainable farming and fisheries practices. It said a third of 46 newly assessed endemic species of lizards and snakes in Japan were threatened by factors such as habitat loss, collection for pet stores and the introduction of invasive species. (Photo by N. Kidera via AP Photo) 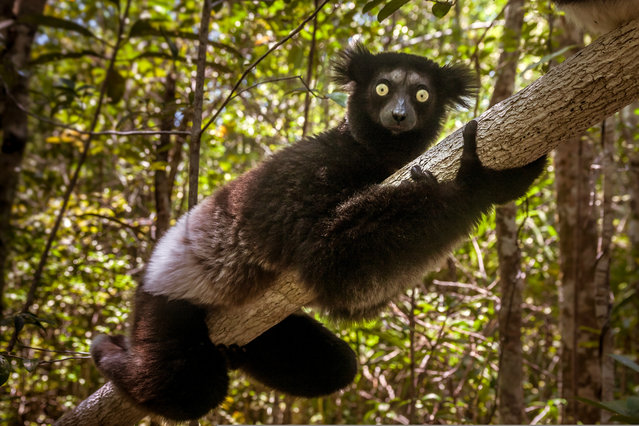 The secretive indri (Indri indri) of Madagascar, the largest living lemur. It is also critically endangered and highly evolutionarily distinct with no close relatives, which makes its branch one of most precarious on the mammal evolutionary tree. In the likely event that the indri goes extinct, we will lose 19m years of unique evolutionary history from the mammal tree of life. (Photo by Pierre-Yves Babelon/Aarhus University) 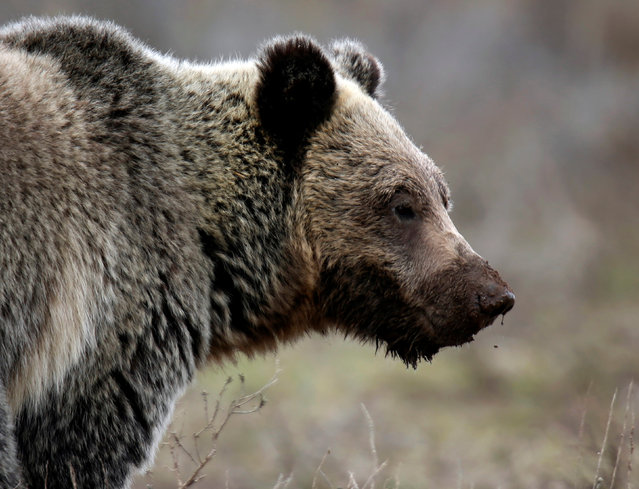 A grizzly bear roams through the Hayden Valley in Yellowstone National Park in Wyoming, U.S. on May 18, 2014. (Photo by Jim Urquhart/Reuters)

A baby mountain gorilla (Gorilla beringei beringei) in Virunga national park, Rwanda. A new census has revealed that the mountain gorilla population is now over 1,000. (Photo by Dennis Stogsdill/WWF) 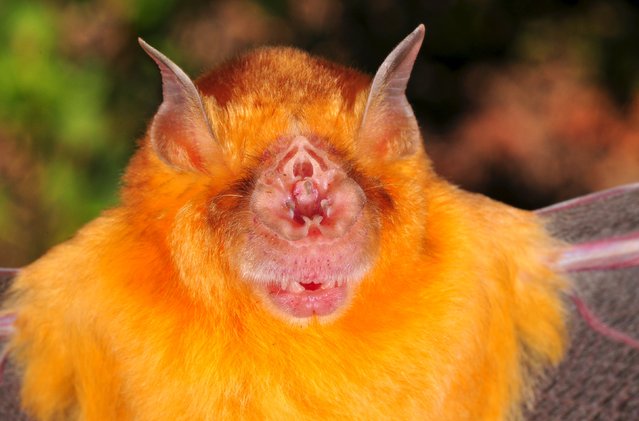 An Australian native animal known as an Orange leaf-nosed bat can be seen in this handout picture taken July 16, 2010. (Photo by Mark Cowan/Reuters/Department of Parks and Wildlife Western Australia) 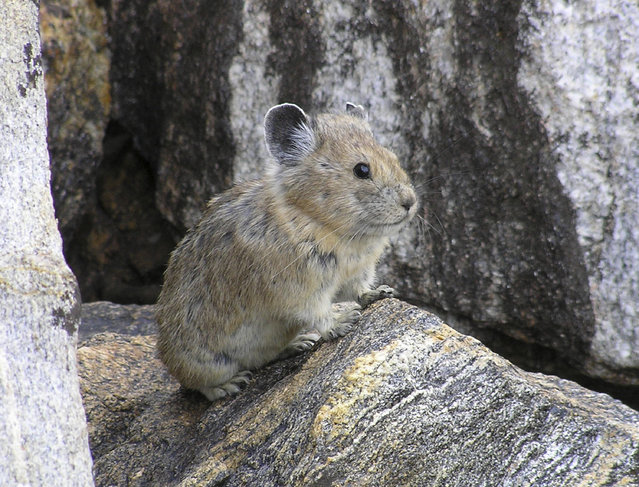 This August 17, 2005 file photo provided by the US Geological Survey/Princeton University shows an American pika. Federal officials have rejected a petition to give greater protections to the rabbit-like American pika, which researchers say is vanishing from mountainous areas of the West due to climate change. (Photo by Shana S. Weber/USGS, Princeton University via AP Photo) 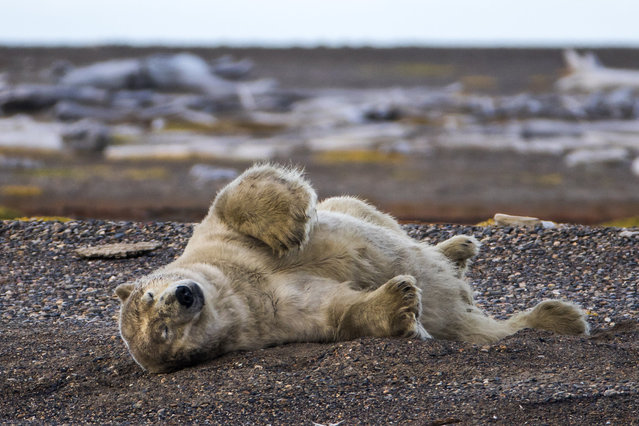 A polar bear rolls in the dirt on a barrier island after feasting on the remains of a bowhead whale, harvested legally by whalers during their annual subsistence hunt, just outside the Inupiat village of Kaktovik, Alaska, USA, 10 September 2017. As climate change shrinks their natural habitat, polar bears are turning Kaktovik into their very own sanctuary city. (Photo by Jim Lo Scalzo/EPA/EFE) 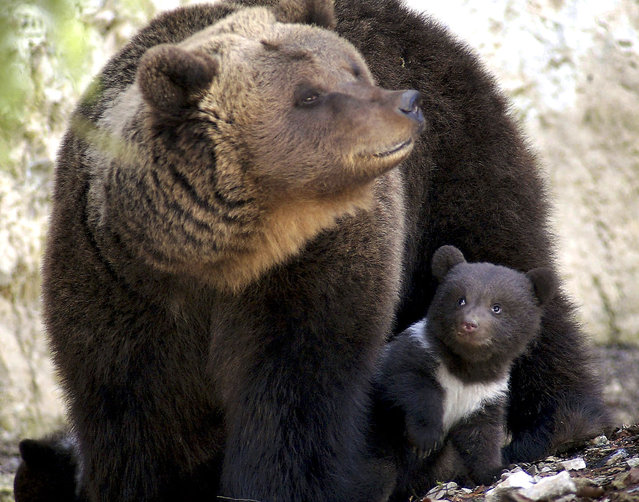 Grizzly bear mother Ursina parades with one of her three new born cubs in the Parc du Mont d'Orzeires, near Vallorbe, Switzerland, Tuesday April 6, 2004. The three little bears are named Sava, Tara and Kupa, after three rivers in Croatia, where father bear Georges is from. (AP Photo/Keystone, Flash Press) 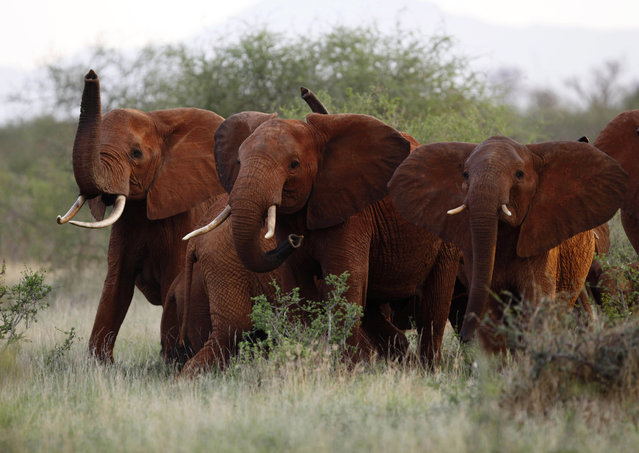 In this file photo taken Tuesday, March 9, 2010, elephants use their trunks to smell for possible danger in the Tsavo East national park, Kenya. Some African elephant herds are adapting to the danger of poaching by moving out of risky areas, according to one conservation group. The plight of elephants is a key issue at the meeting of the Convention on International Trade in Endangered Species of Wild Fauna and Flora, or CITES, which began over the weekend and ends Oct. 5, 2016. (Photo by Karel Prinsloo/AP Photo) 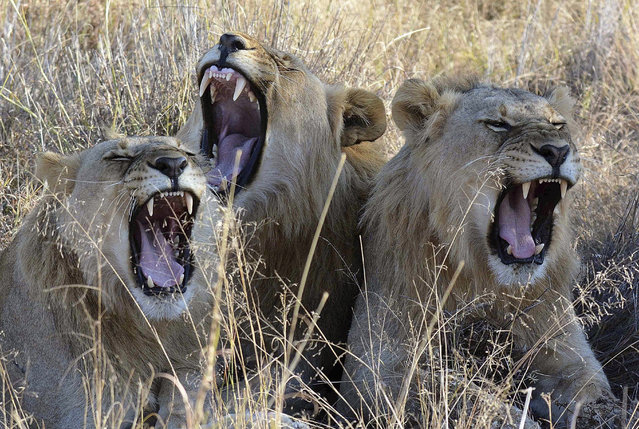 In this June 15, 2014 file photo, lions rest in the Madikwe Game Reserve, South Africa. The slaughter of more than fifty lions on a South African farm last week has increased scrutiny of the country's policy of allowing the annual export of 800 skeletons of captive-bred lions to meet a demand for bones in Asia. (Photo by Kevin Anderson/AP Photo) 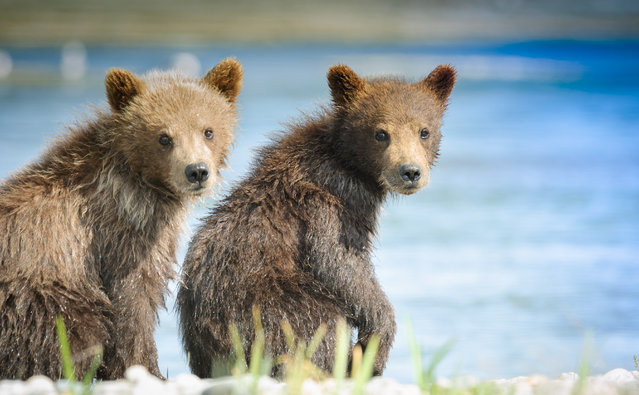 A pair of spring cubs sits anxiously while their mother feeds for salmon, Alaska. Cubs like these are born during the Alaskan winter, and only come to feed at the river reluctantly. Ever watchful, their mother is never far away for fear of other bears killing the cubs. (Photo by Jessica Matthews/The Washington Post) 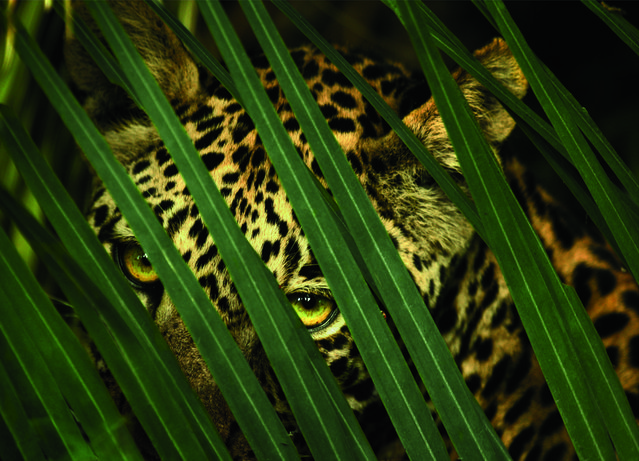 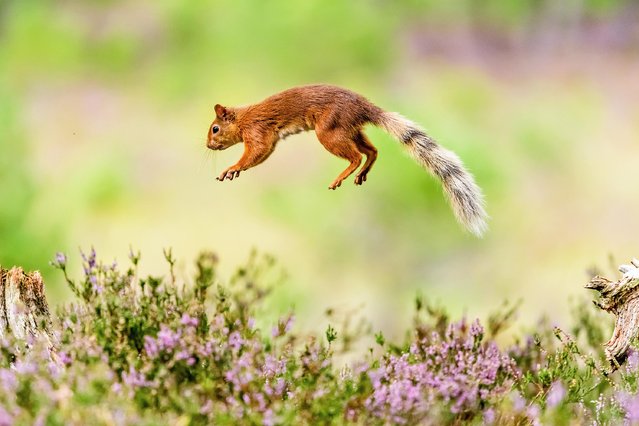 A red squirrel in the Cairngorms, United Kingdom where the species is doing so well that there are enough to export elsewhere. (Photo by Daniel Hauck/Cover Images) 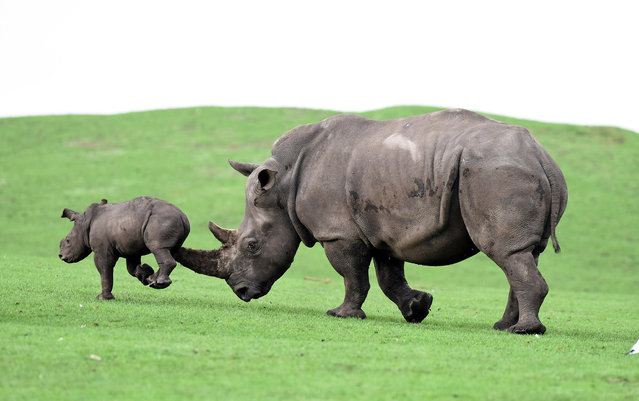 Cheeky baby Southern white rhino Granville mock charges his Aunty Keyah and is then sent flying when she loses her patience and uses her horn to send him scuttling back to his Mother Alisa. The baby rhino who was born at the West Midlands Safari Park near Bewdley, Worcestershire, on the 25th September 2018 has proven to be quite a cheeky chappy already full of confidence and energy. (Photo by Peter Goddard/Caters News Agency) 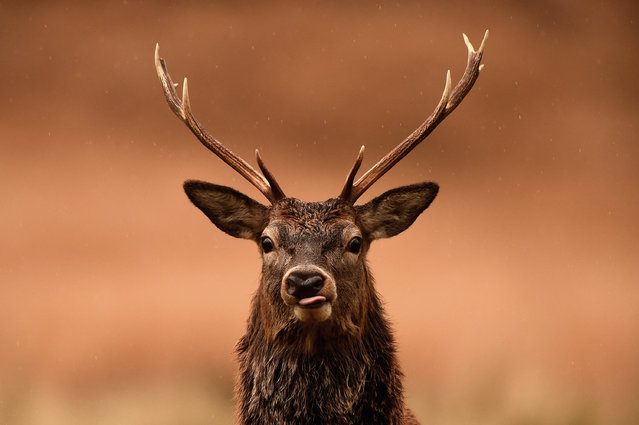 Red deer graze following the end of the rutting season on November 12, 2014 in Glen Etive, Scotland. The rutting season sees the large red deer stags compete against each other for mating rights and can be heard roaring and bellowing in an attempt to attract the hinds. The rut draws to a close in early November when the males will spend the winter feeding to regain strength for the following year's season. (Photo by Jeff J. Mitchell/Getty Images)
Edit Del
18 Nov 2018 00:02:00, post received 0 comments
Publication archive:
←   →
Popular tags:
All tags
Last searches: