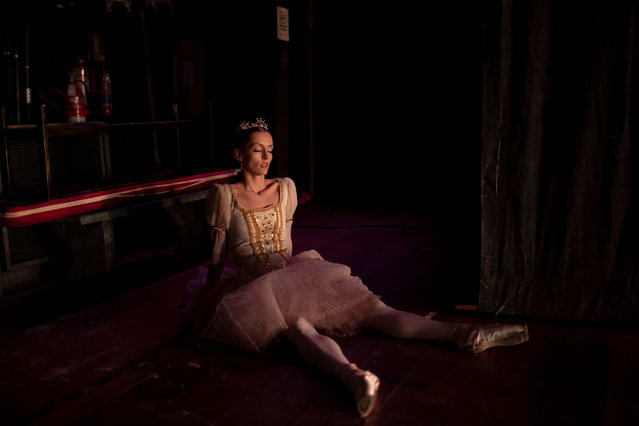 A Ballet dancer rests during the rehearsal of “Swan Lake” at the Municipal Theatre of Rio de Janeiro in Rio de Janeiro, Brazil, on May 12, 2022. (Photo by Mauro Pimentel/AFP Photo) 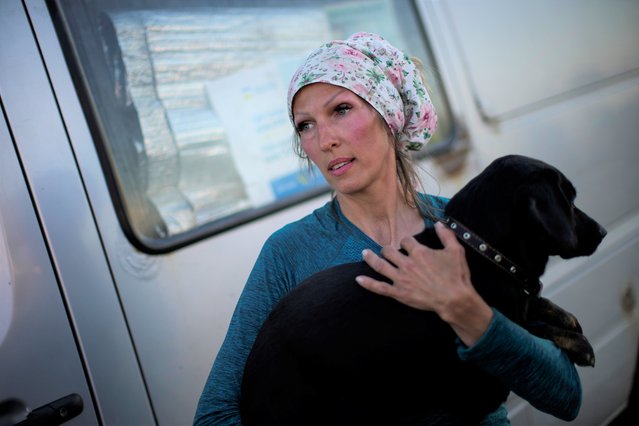 Iuliia holds her dog, Chackie, upon her arrival to a reception center for displaced people in Zaporizhzhia, Ukraine, Sunday, May 8, 2022. Iuliia drove her grandmother's friend from Kherson as thousands of Ukrainian continue to leave Russian occupied areas. (Photo by Francisco Seco/AP Photo) 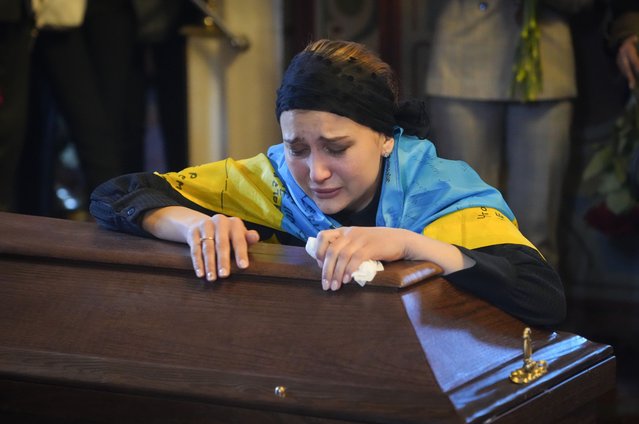 The widow cries at the coffin of volunteer soldier Oleksandr Makhov, 36 a well-known Ukrainian journalist, killed by the Russian troops, at St Michael cathedral in Kyiv, Ukraine, Monday, May 9, 2022. (Photo by Efrem Lukatsky/AP Photo) 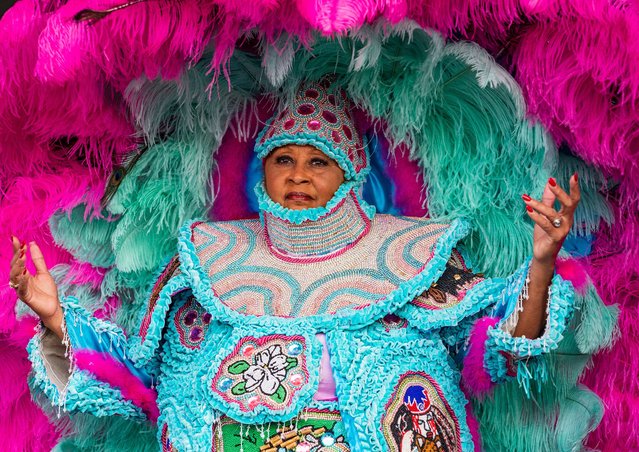 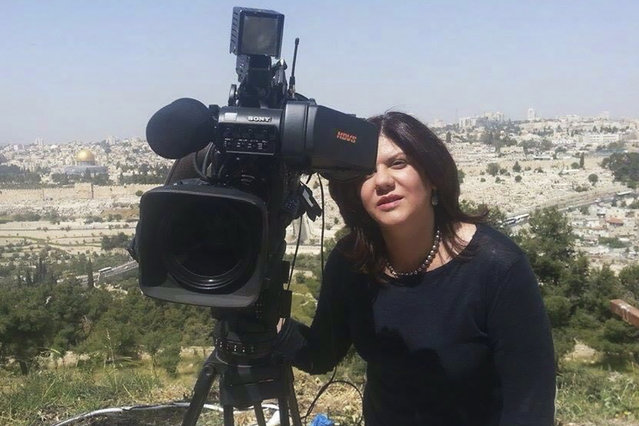 In this undated photo provided by Al Jazeera Media Network, Shireen Abu Akleh, a journalist for Al Jazeera network, stands next to a TV camera in an area where the Dome of the Rock shrine at Al-Aqsa Mosque in the Old City of Jerusalem is seen at left in the background. Abu Akleh, a well-known Palestinian female reporter for the broadcaster's Arabic language channel, was shot and killed while covering an Israeli raid in the occupied West Bank town of Jenin early Wednesday, May 11, 2022. (Photo by Al Jazeera Media Network via AP Photo) 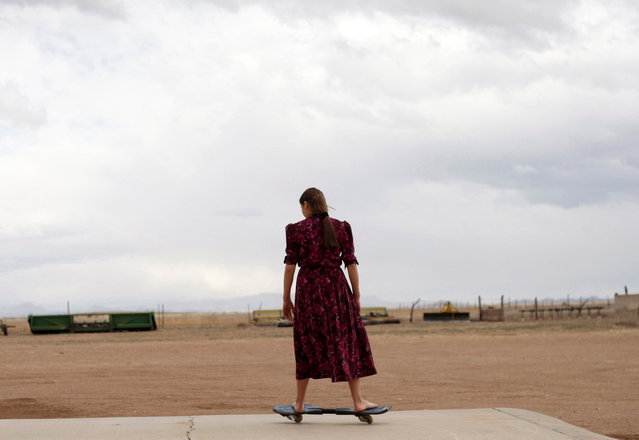 Catalina rides a skateboard outside her home in the Mennonite community of Buenos Aires, Janos, Chihuahua, Mexico on February 16, 2012. (Photo by Jose Luis Gonzalez/Reuters) 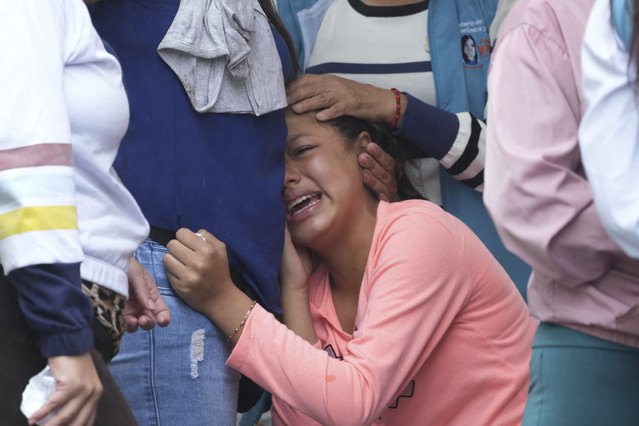 A woman cries outside the morgue where families wait for the bodies of dead inmates to be released after a deadly riot broke out in Bellavista jail in Santo Domingo de los Tsachilas, Ecuador, Tuesday, May 10, 2022. (Photo by Dolores Ochoa/AP Photo) 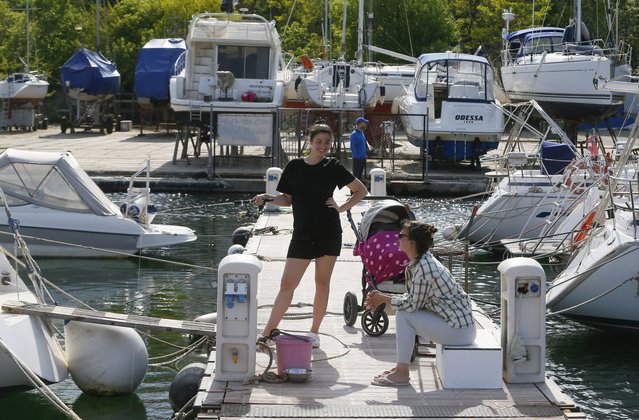 Ukrainians spend time at the marina where yachts stay parked on a pier of a Black Sea Yacht Club in the South Ukrainian city of Odesa, 15 May 2022. Yachts cannot leave the port due to the military conflict. On 24 February, Russian troops had invaded Ukrainian territory starting a conflict that has provoked destruction and a humanitarian crisis since. (Photo by Stepan Franko/EPA/EFE) 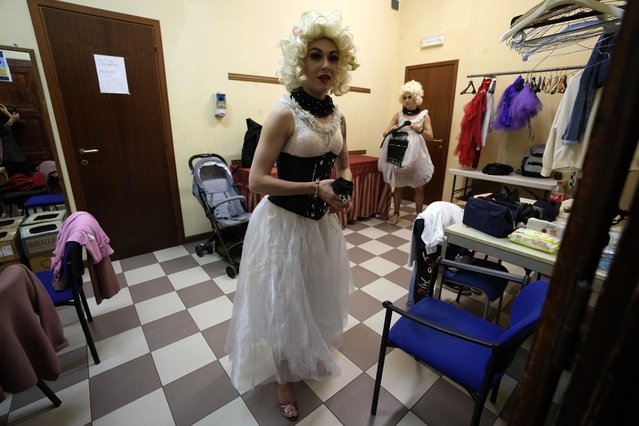 Performer Hanna Honcharenko, walks backstage before the start of the show “Alice in Wonderland” in Pistoia, Italy, Friday, May 6, 2022. A Ukrainian circus troupe is performing a never-ending “Alice in Wonderland” tour of Italy. They are caught in the real-world rabbit hole of having to create joyful performances on stage while their families at home are living through war. The tour of the Theatre Circus Elysium of Kyiv was originally scheduled to end in mid-March. (Photo by Alessandra Tarantino/AP Photo) 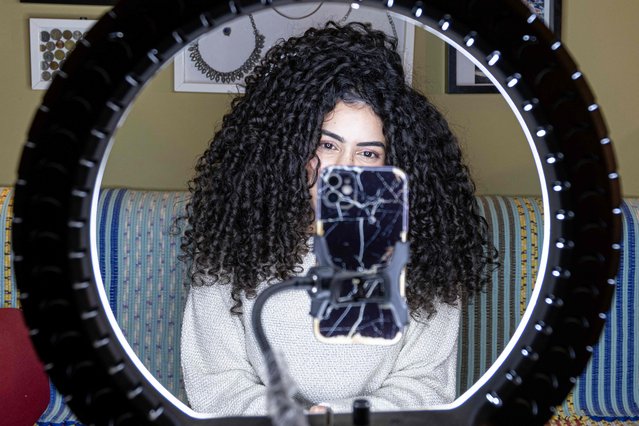 Mariam Ashraf, a teacher and “natural hair influencer”, speaks before a phone on a tripod and lights during a live-stream at her home in Egypt's capital Cairo on March 22, 2022. “Shaggy”, “messy”, “unprofessional”. Natural curls were once looked down upon in Egypt, where Western beauty standards favoured sleek, straight locks. Now, things are changing. (Photo by Khaled Desouki/AFP Photo) 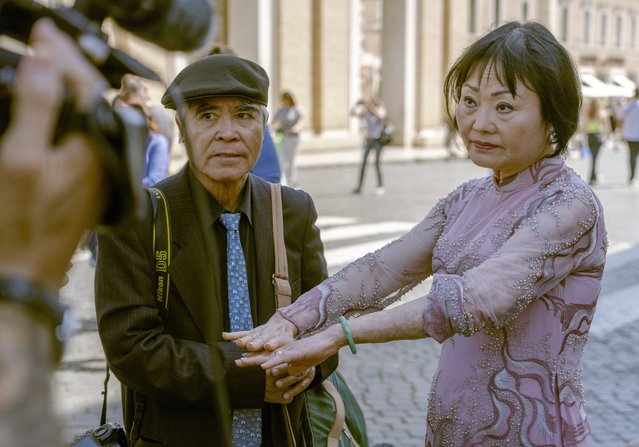 Pulitzer Prize-winning photographer Nick Ut, left, looks at Kim Phuc showing to cameras the scars left by napalm on her body after they met with Pope Francis during the papal weekly general audience in St. Peter's Square at The Vatican, Wednesday, May 11, 2022. Ut and UNESCO Ambassador Kim Phuc are in Italy to promote the photo exhibition “From Hell to Hollywood” resuming Ut's 51 years of work at the Associated Press, including the 1973 Pulitzer-winning photo of Kim Phuc fleeing her village after it was accidentally hit by napalm bombs dropped by South Vietnamese forces. (Photo by Domenico Stinellis/AP Photo) 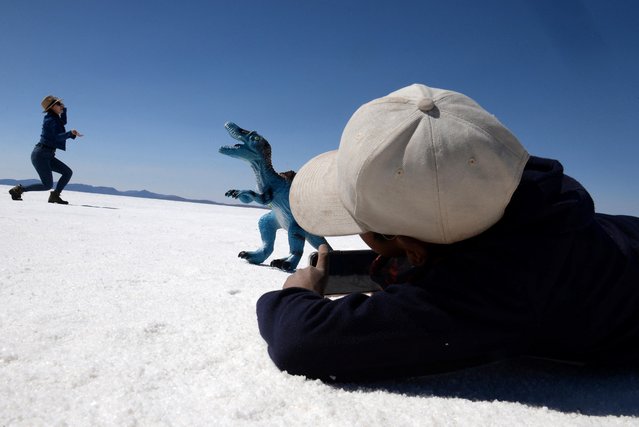 Piter Condori, 11, takes pictures of a tourist to earn money for his family, at the Uyuni Salt Flat in Bolivia on March 27, 2022. (Photo by Claudia Morales/Reuters) 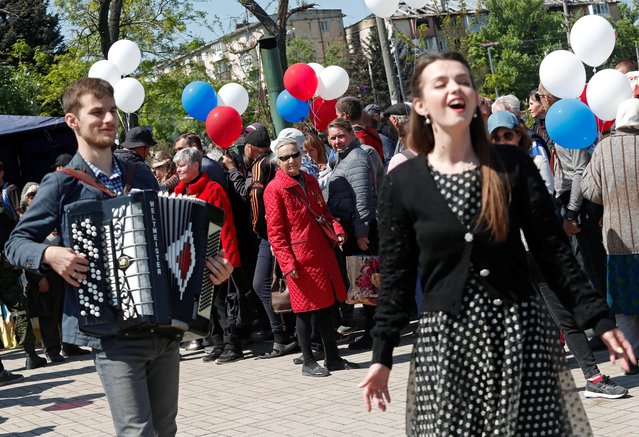 People take part in a ceremony, marking the 77th anniversary of the victory over Nazi Germany in World War Two, during Ukraine-Russia conflict in the southern port city of Mariupol, Ukraine on May 9, 2022. (Photo by Alexander Ermochenko/Reuters) 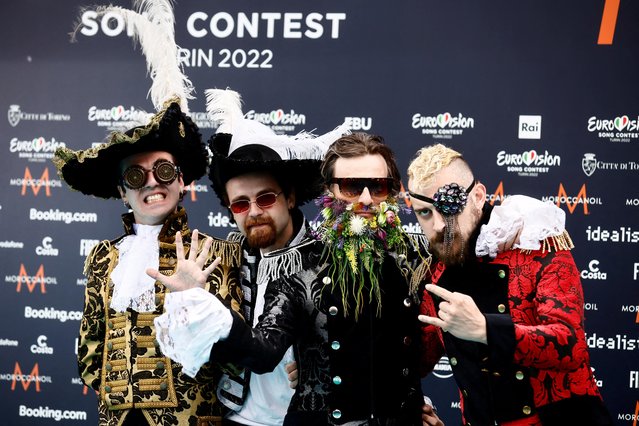 Contestants Circus Mircus from Georgia pose on the “Turquoise Carpet” during the opening ceremony of the 2022 Eurovision Song Contest in Turin, Italy, May 8, 2022. (Photo by Yara Nardi/Reuters) 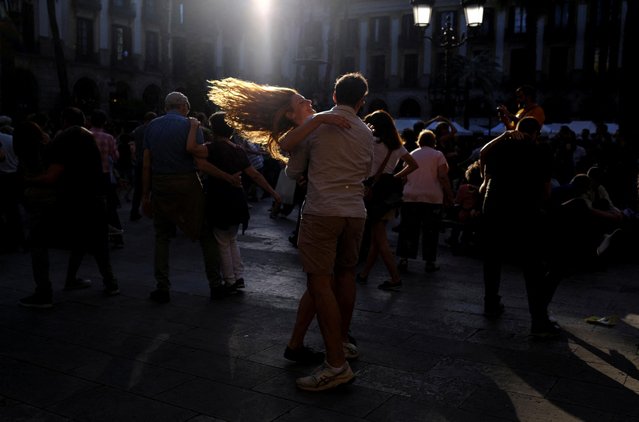 Tourists dance at Plaza Reial (Reial Square), after most pandemic-related restrictions were lifted in Barcelona, Spain, May 14, 2022. (Photo by Nacho Doce/Reuters) 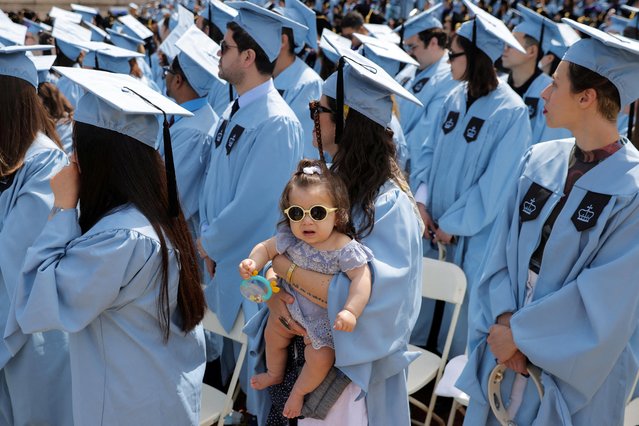 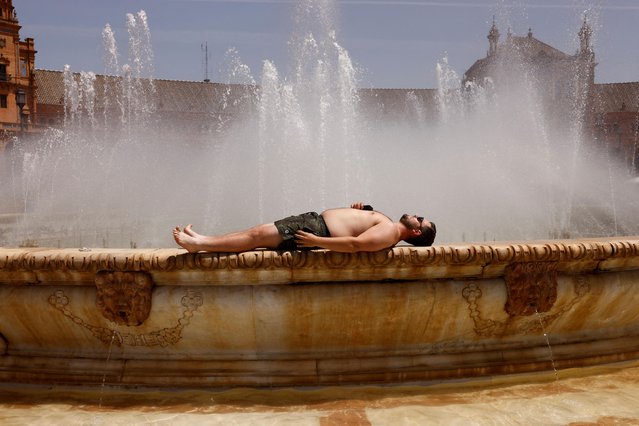 A fan cools off in Seville ahead of the Europa League final in Seville, Spain on May 18, 2022. (Photo by Jon Nazca/Reuters) 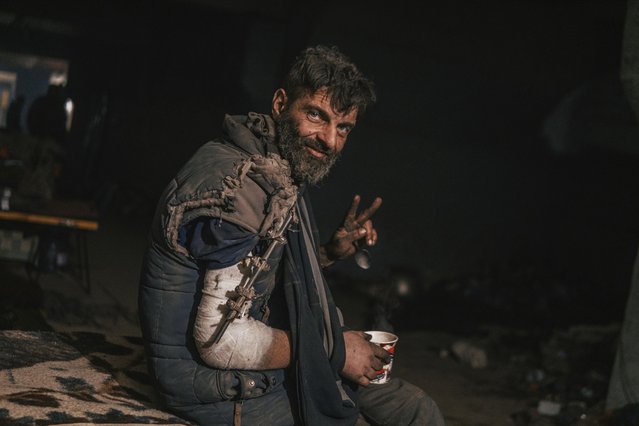 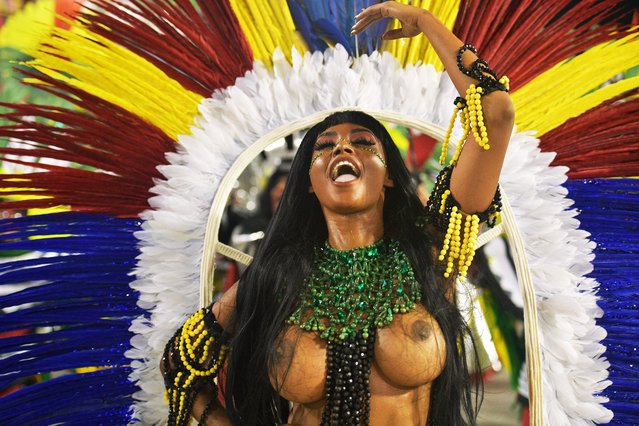 A performer from the Imperatriz samba school takes part in the first night of Rio's Carnival at the Sambadrome in Rio de Janeiro on March 4, 2019. (Photo by Carl de Souza/AFP Photo) 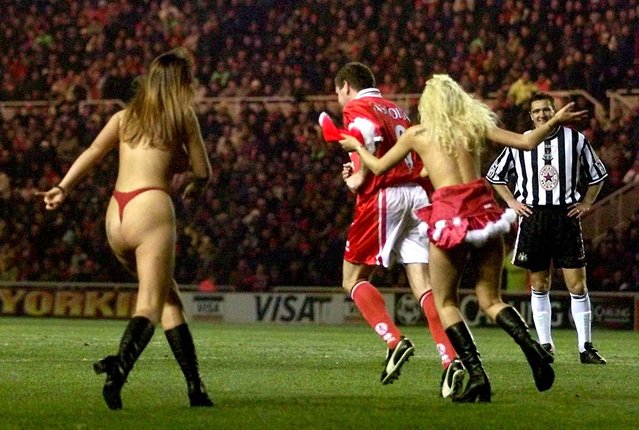