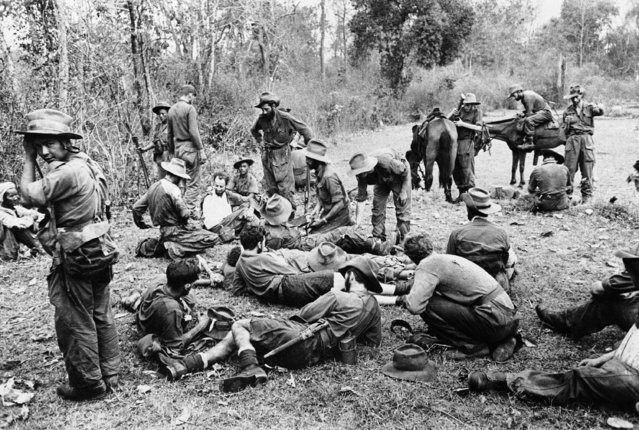 Members of Col. Philip Cochran's first air commandos, some of them nursing battle wounds, relax at the edge of a landing strip deep in the interior of Burma, June 3, 1944 where they are pressing forward their attacks against the Japanese. (Photo by AP Photo) 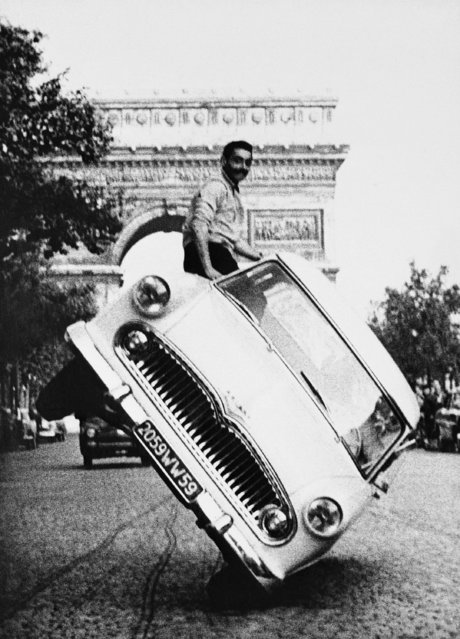 How not to drive is illustrated in this stunt, driving down the Champs Elysees in Paris, France, June 6, 1959. Jean Sunny from an auto rodeo is at the wheel and his friend hanging out the passenger side window is Mustache, a stunt man. The scene was filmed at 6 a.m. for film on safety. (Photo by Jacques Marqueton/AP Photo) 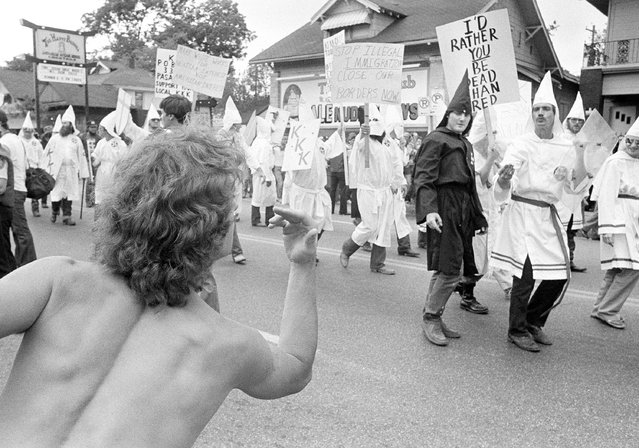 A spectator gestures to the Ku Klux Klan marchers as the KKK paraded through the heart of Houston's gay community Saturday, June 9, 1984. About 55 members of the Klan marched under the protection of hundreds of policemen. There was a lot of shouting between the opponents, but no clashes. (Photo by AP Photo/RC) 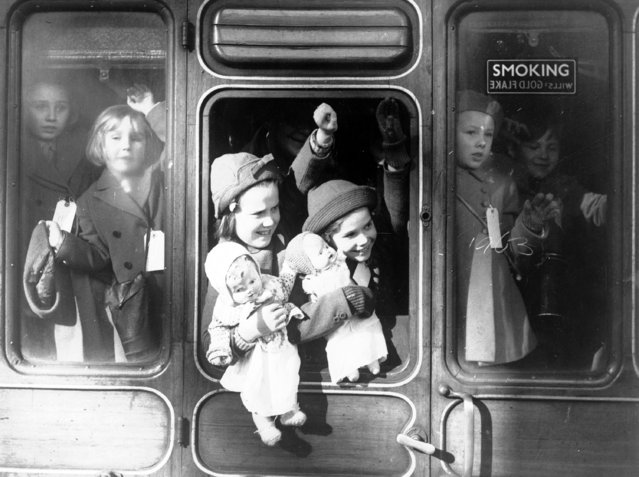 Two small girls hold their dolls while waving goodbye to relatives from a train carriage as they are evacuated to the west country, at a London station, to escape the Nazi bombing, June 13, 1940. All the children wear identity labels. (Photo by AP Photo) 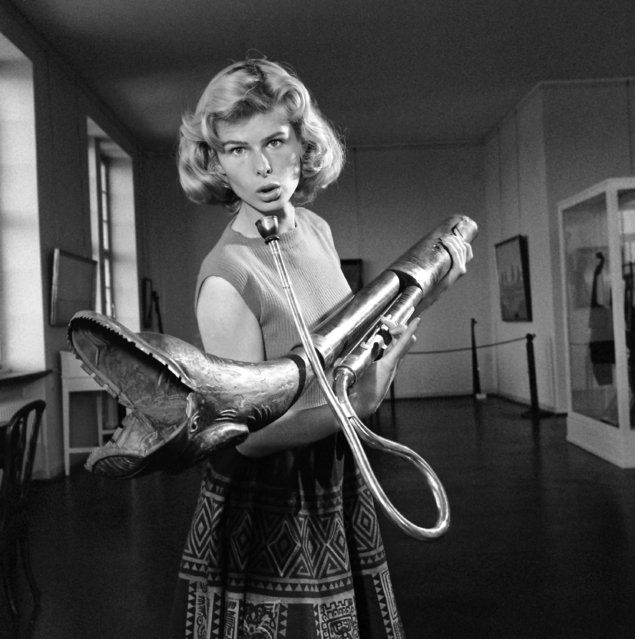 A 19th century horn with a frightening dragon head is held by a model at the exhibition of ancient musical instruments at the municipal museum in Hamburg, June 14, 1957. (Photo by Henry Brueggemann/AP Photo) 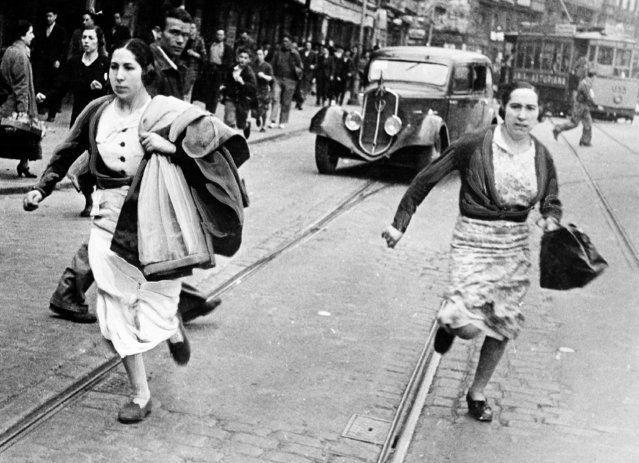 Civilians scurry for shelter through the streets of Bilbao, northern Spain, during an air raid, June 15, 1937. (Photo by AP Photo) 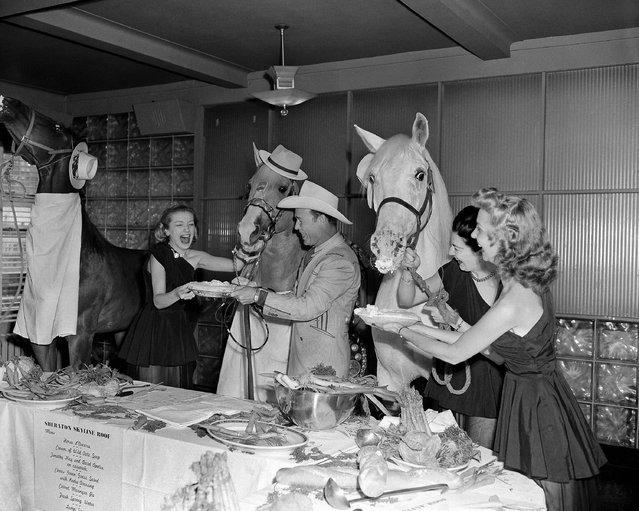 Carrot cream pie is the dessert as movie horses Flicka, Trigger, and Thunderhead dine at the Hotel Sheraton in New York on June 15, 1947. Trigger, in New York for the rodeo his pal, Roy Rogers, is putting on at the Polo Grounds, played host to his friends of the Hollywood horsey set. Florence McIlvaine, left, and Clare Trzaka feed Flicka, while Mimi Bojack and Roy Rogers serve Trigger. Thunderhead, in background, neighs his approval of the dessert. (Photo by Joe Caneva/AP Photo) 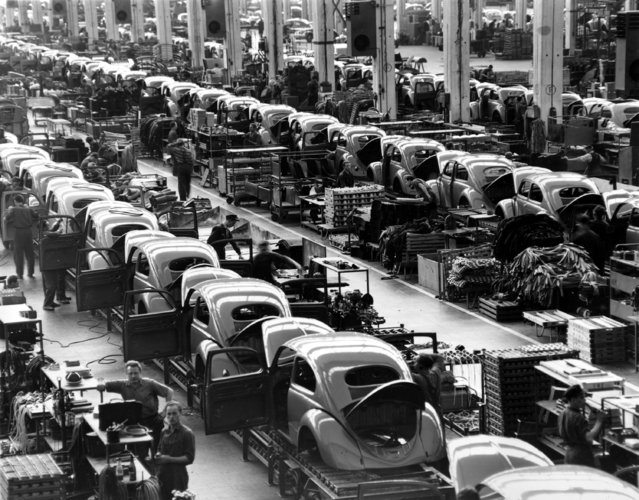 This general view shows the assembly lines at the Volkswagen auto works plant, which manufactures nearly 900 automobiles each day, in Wolfsburg, West Germany, on June 16, 1954. (Photo by AP Photo/Reithausen) 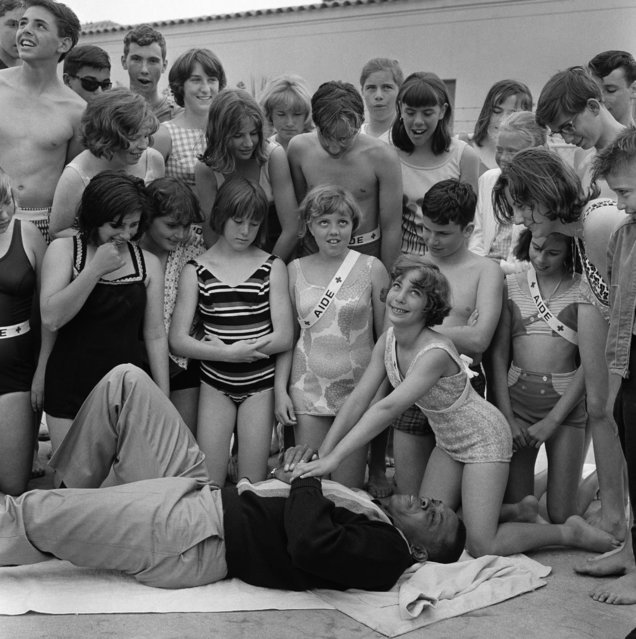 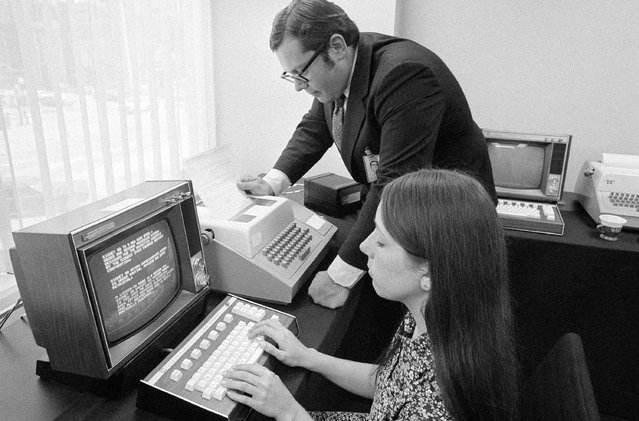 High-speed movement of securities orders on the Midwest Stock Exchange is handled by this new computerized communications device in the Chicago officer of the Exchange June 16, 1971. While R. Thomas Rehwald, senior Vice-President and treasurer of the Midwest Stock Exchange Serviced Corp., watches, Arois Ruehl types information into the machine for storage and transmission. The system, Signet 80, handles paperwork more than 20 times faster than any previous system. (Photo by Charles Knoblock/AP Photo) 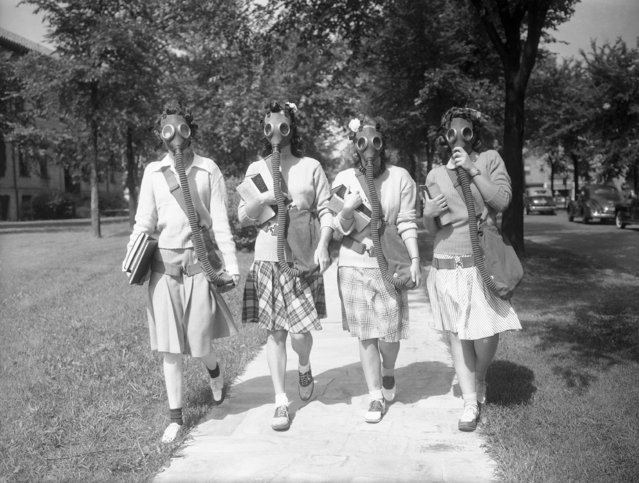 Looking ahead to the possibility that gas masks may some day be a necessary part of their ensemble, these University of Detroit students are trying out masks in a practice drill on the campus June 23, 1942. Hidden behind the masks, which they soon learned to wear with a minimum of discomfort, are, from left: Mary Turner, Helen Williams, Evelyn Buss and Joan Joliet. (Photo by AP Photo) 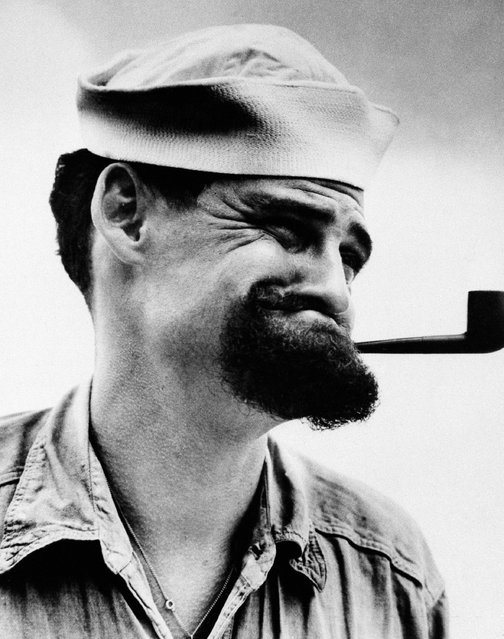 Hollywood experience could be responsible for this “Popeye the sailor” pose of Edward R. Baker, Phom 3/c, of North Hollywood, Calif. Baker is a former film industry employee stationed at advance naval headquarters in the Pacific on June 23, 1945. (Photo by AP Photo) 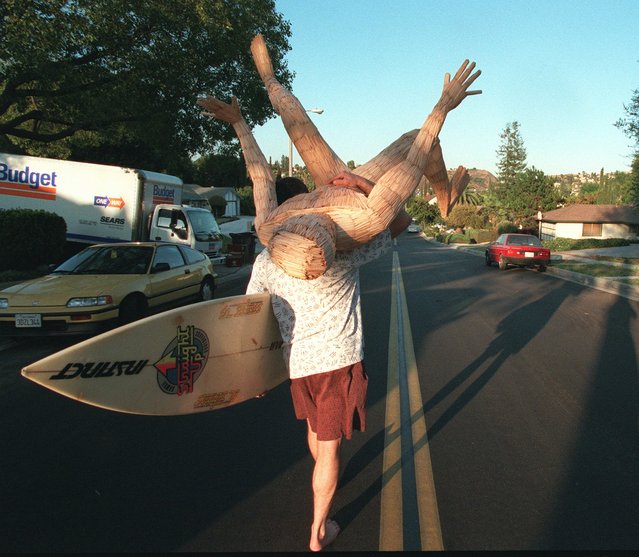 Vince Nalbone walks down the street of his Diamond Bar, Calif. neighborhood Thursday, June 27, 1996, carrying his surfboard and a toothpick sculpture of a surfer. Nalbone built the statue over five years during his spare time as a resident at County-USC Medical Center. Nalbone, who is in the midst of moving, was carrying his belongings to the moving truck. (Photo by Susan Sterner/AP Photo) 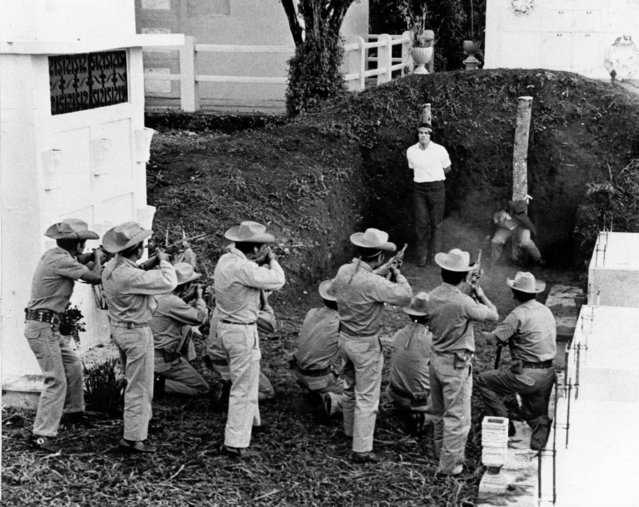 Convicted murderer Hector Alvarado Mazariegos, right, drops to the ground as he is hit by bullets of a Guatemala firing squad in the public cemetery at Mazatenango, June 28, 1975. His companion, Rocael Ortiz, met the same fate a few seconds later. Both were convicted of murder. (Photo by AP Photo/Anzueto) 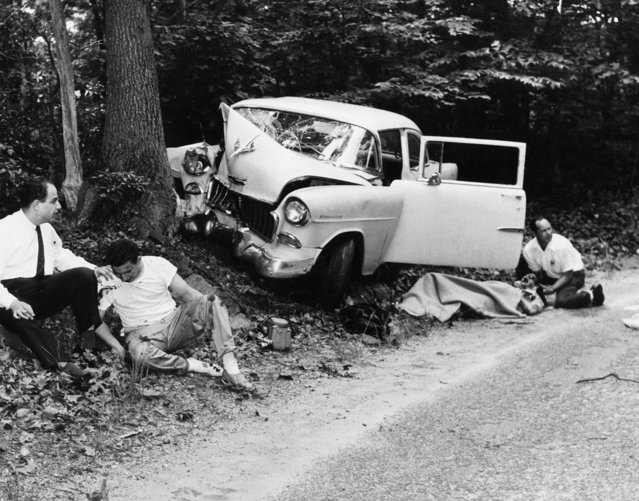 Mara Scherbatoff, New York bureau chief for French magazine Paris Match, lies fatally injured under a blanket alongside car in which she was pursuing Marilyn Monroe and Arthur Miller near his Roxbury, Conn., home on June 29, 1956. Unidentified man comforts her before she was taken to the hospital where she died. Ira Slade, second from left, who was driving the car, is aided by his brother Paul, a Paris Match photographer, who was not in the car. No reason was immediately known why the car left the road and hit a tree. (Photo by AP Photo) 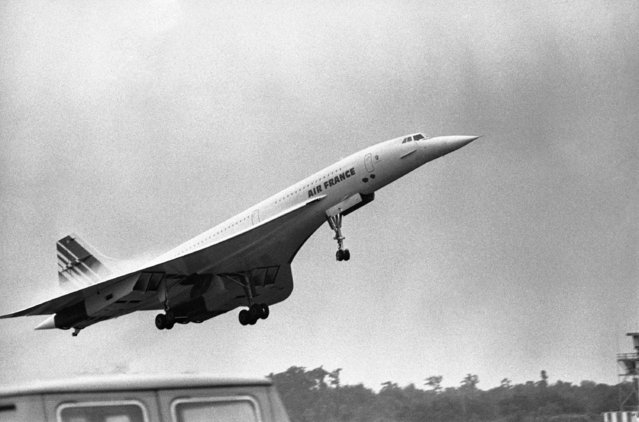 A French supersonic airliner Concorde takes off from New Orleans, Saturday, May 24, 1976, with French President Valery Giscard d'Estaing aboard returning to Paris after a U.S. visit. (Photo by AP Photo) 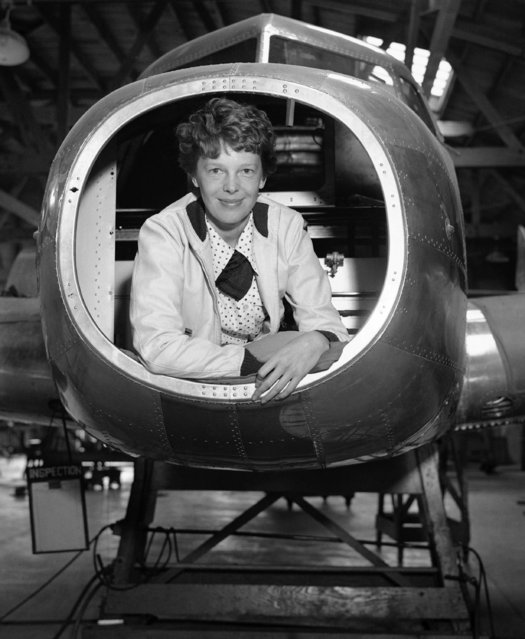 Amelia Earhart, noted flier, inspected the Twin-Engined Lockheed Electra Monoplane which is being built for her use in future long distance flights at the plant, May 26, 1936, Burbank, Calif. The ship will carry 1200 gallons of gasoline and have a cruising range of more than 4500 miles. Photo shows Miss Earhart in plane looking over blueprints. (Photo by AP Photo) 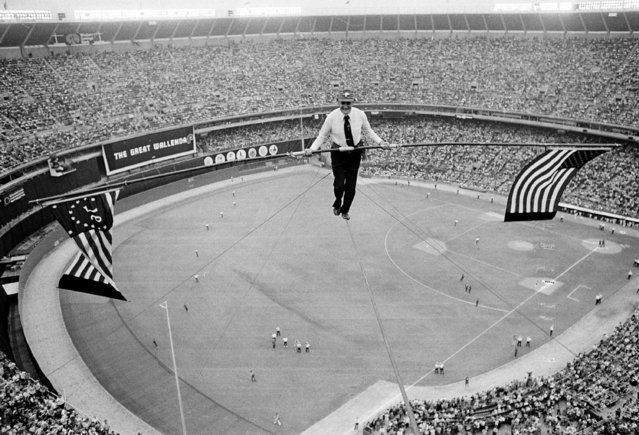 Karl Wallenda, 71, walks on a cable 200 feet above the playing field at Veterans Stadium between doubleheader baseball games in Philadelphia, Pa., Monday, May 31, 1976. Wallenda unfurled a bicentennial and American flag from his balancing bar after doing a headstand midway across the 640-foot span steel cable. The walk took 18 minutes. (Зрщещ ин Bill Ingraham/AP Photo) 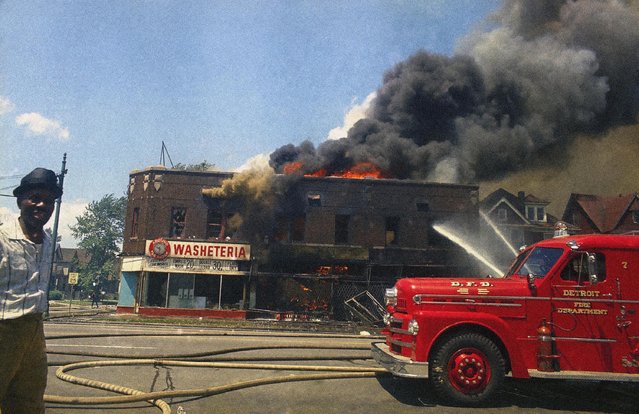 In this July 1967 file photo, firefighters spray water into a burning building after rioting in Detroit. (Photo by AP Photo) 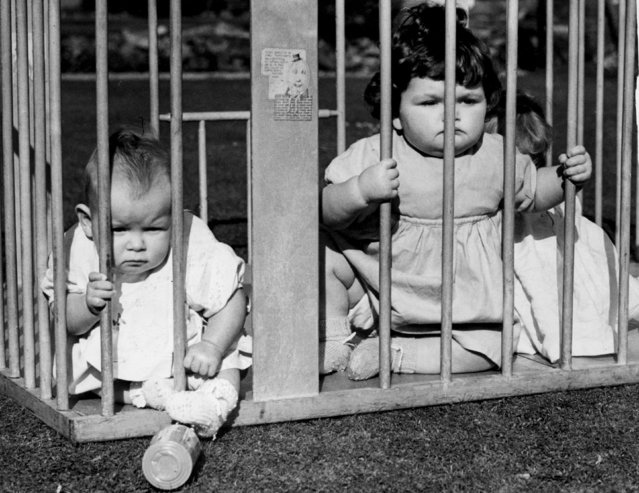 Two babies evacuated from London contemplate their new life in the country from behind the bars of a play-pen, 18th October 1939. (Photo by Gerry Cranham/Fox Photos/Getty Images) 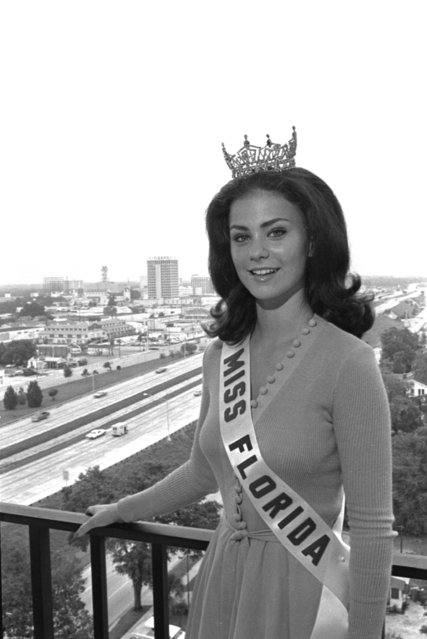 Delta Burke, 17, of Orlando poses with her city's skyline behind her on June 30, 1974. She was named 1974 Miss Florida in the Orlando contest and will represent her state in the annual Miss America beauty show. (Photo by AP Photo)
Edit Del
29 Jul 2017 07:53:00, post received 0 comments
Publication archive:
←   →
Popular tags:
All tags
Last searches: