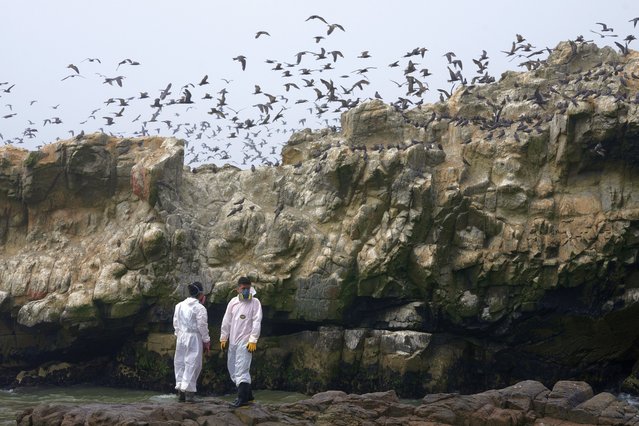 Workers clean oil from Cavero Beach in the Ventanilla district of Callao, Peru, Friday, January 21, 2022. The oil spill on the Peruvian coast was caused by the waves from an eruption of an undersea volcano in the South Pacific nation of Tonga. (Photo by Martin Mejia/AP Photo) 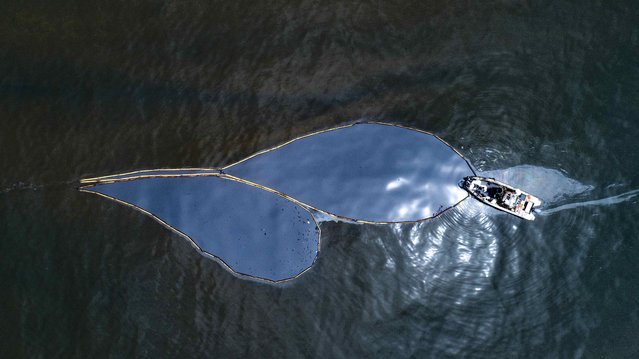 An aerial photograph taken from a drone shows a general view of the oil cleaning operations in the Ventanilla Sea, north of Lima, Peru, 22 January 2022 (issued 25 January 2022). The president of the Council of Ministers of Peru, Mirtha Vasquez, declared this Monday that the Executive is evaluating legal issues and considering sanctions, due to the infractions that the Spanish company Repsol has allegedly committed in the oil spill in the sea, all before deciding whether to suspend its operation license. On 15 January a crude oil spill in the sea occured, from a ship that was unloading oil into the pipes of the La Pampilla refinery, which is operated by Repsol and that over the days has spread to more than 1.8 kilometers squares of coastline and 7.1 square kilometers of sea. (Photo by Cristian Olea/EPA/EFE) 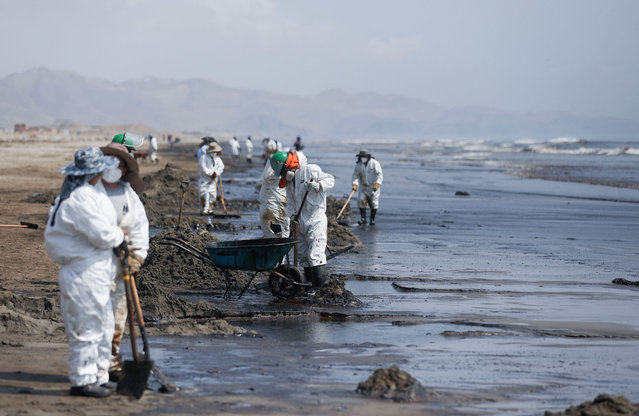 Workers clean up an oil spill caused by abnormal waves, triggered by a massive underwater volcanic eruption half a world away in Tonga, at the Peruvian beach in Ventanilla, Peru, January 18, 2022. (Photo by Pilar Olivares/Reuters) 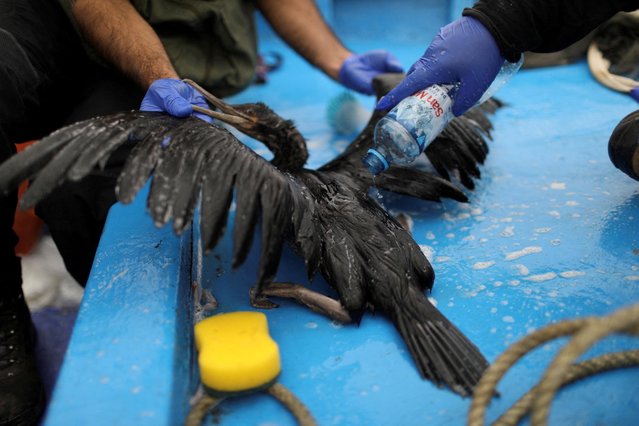 Biologists from the National Service of Protected Natural Areas (SERNANP), work on a bird affected by the oil spill pollution caused by abnormal waves triggered by a massive underwater volcanic eruption half a world away in Tonga, in Ancon, Peru, January 21, 2022. (Photo by Pilar Olivares/Reuters) 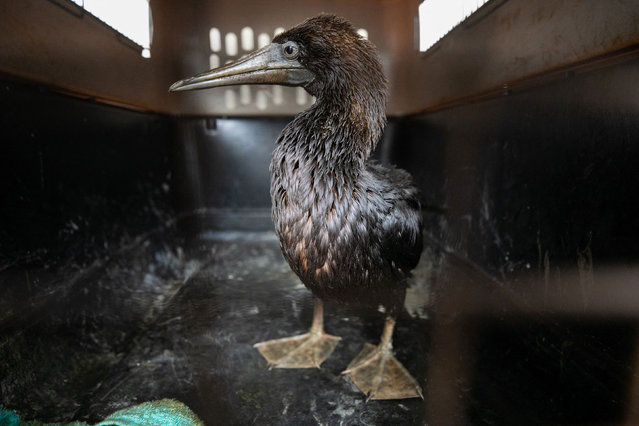 This handout picture released by the Parque de las Leyendas Zoo shows an oil-tainted cormorant before receiveing medical treatment in Lima, on January 20, 2022. The zoo is seeking to save endangered seabirds after a 6,000-barrel oil spill off Peru's central coast, blamed on storm surge caused by a volcanic eruption in Tonga. (Photo by Parque de las Leyendas Zoo/AFP Photo) 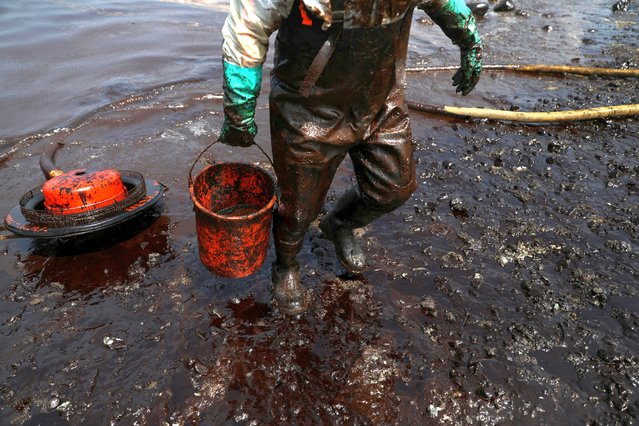 A worker cleans up an oil spill following an underwater volcanic eruption in Tonga, in Ancon, Peru on January 25, 2022. (Photo by Pilar Olivares/Reuters) 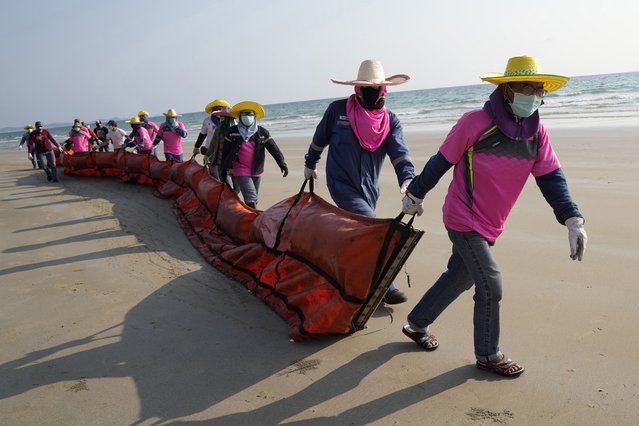 Workers drag an oil spill boom out onto Mae Ram Phueng Beach in hopes of containing any oil washing ashore from a recent spill off the coast of Rayong, eastern Thailand, Friday, January 28, 2022. An oil slick off the coast of Thailand continued to expand Friday and was approaching beaches on the east coast, home to fragile coral and seagrass, officials said. (Photo by Sakchai Lalit/AP Photo) 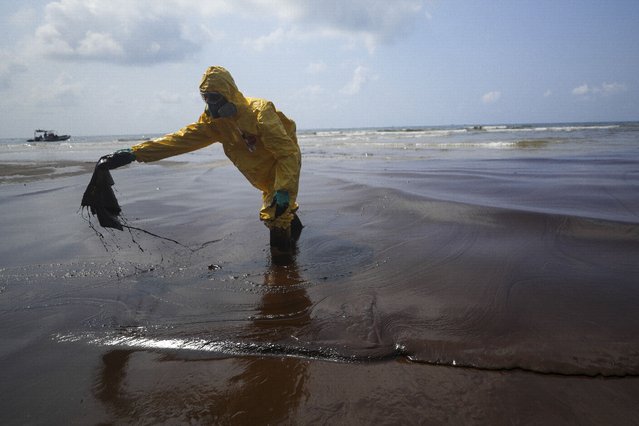 Workers carry out a clean-up operation on Mae Ramphueng Beach after a pipeline oil spill off the coast of Rayong province in eastern Thailand, Saturday, January 29, 2022. At least 20 tons of oil leaked Tuesday night from an undersea hose at an offshore mooring point of the Star Petroleum Refining Co. used to load tankers, and despite efforts to disperse or contain it, some reached the beach Saturday morning, while a large slick remains at sea. (Photo by Nava Sangthong/AP Photo) 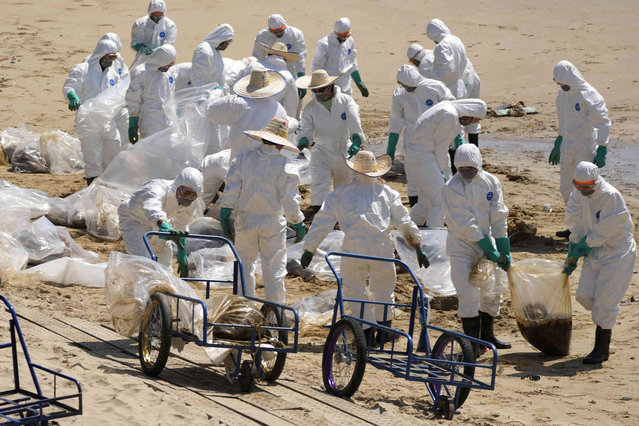 Workers carry out a cleanup operation on Mae Ramphueng Beach after a pipeline oil spill off the coast of Rayong province in eastern Thailand, Sunday, January 30, 2022. The governor of a province in eastern Thailand on Saturday declared a state of emergency after an oil slick washed up on a sand beach, shutting down restaurants and shops in a setback for the pandemic-hit tourism industry. (Photo by Sakchai Lalit/AP Photo) 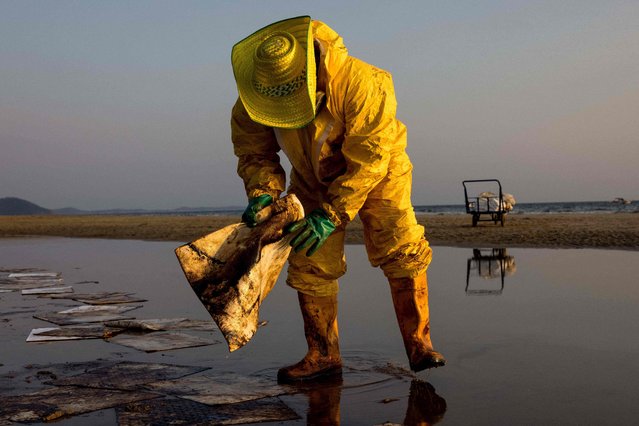 A worker cleans up crude oil on Mae Ram Phueng beach following a spill caused by a leak in an undersea pipeline owned by Star Petroleum Refining Public Company Limited (SPRC) in Rayong on January 29, 2022. (Photo by Jack Taylor/AFP Photo) 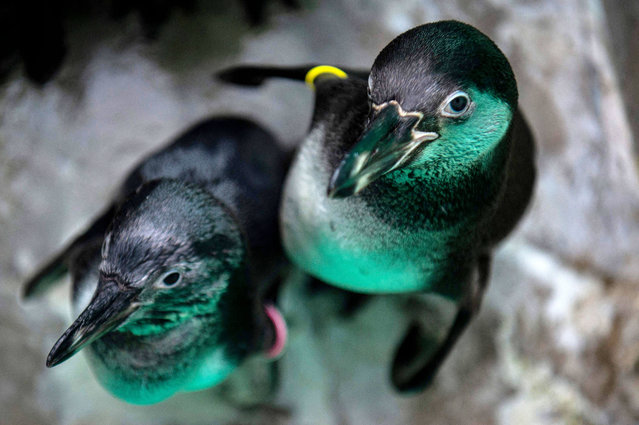 A group of Humboldt penguin (Spheniscus humboldti) are seen after being clean by specialists after the oil spill happened when an Italian-flagged tanker, the “Mare Doricum”, was unloading oil at the La Pampilla refinery, at the Parque de las Leyendas Zoo in Lima, on February 02, 2022. The spill, described as an “ecological disaster” by the Peruvian government, happened when a tanker was unloading oil at a refinery owned by Spanish company Repsol. It polluted beaches, killed wildlife and robbed fishermen of their livelihood. (Photo by Ernesto Benavides/AFP Photo) 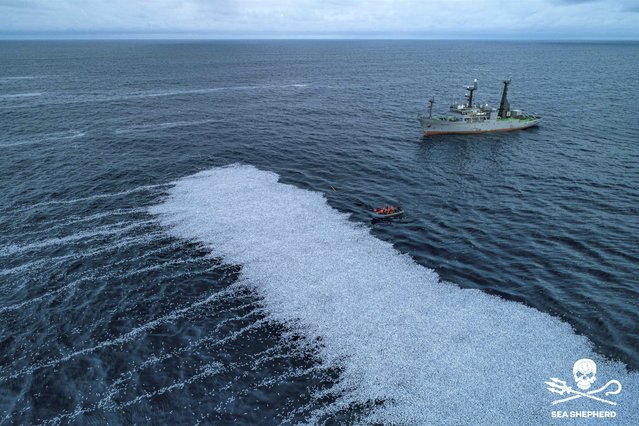 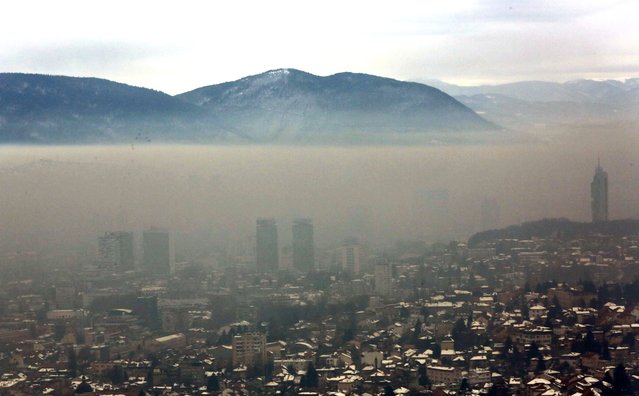 A general view of the surroundings of the city of Sarajevo, Bosnia and Herzegovina, 05 February 2022. With 217 AQI (Air Quality Index), Sarajevo is one of the most polluted cities in the world. (Photo by Fehim Demir/EPA/EFE) 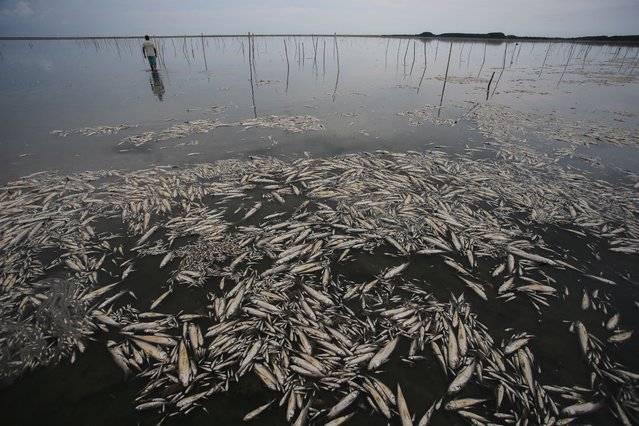 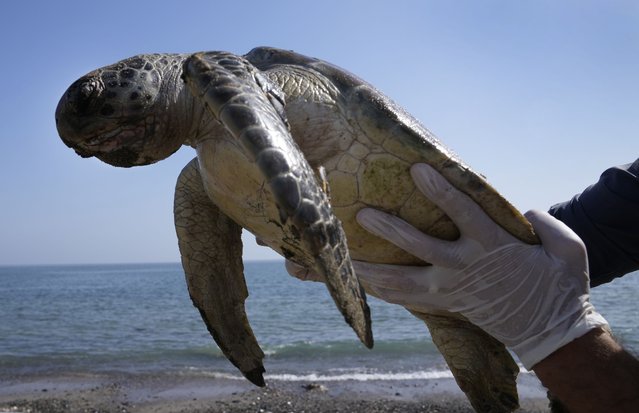 A dead green sea turtle is collected from the beach at the Khor Kalba Conservation Reserve, in the city of Kalba, on the east coast of the United Arab Emirates, Tuesday, February 1, 2022. A staggering 75% of all dead green turtles and 57% of all loggerhead turtles in Sharjah had eaten marine debris, including plastic bags, bottle caps, rope and fishing nets, a new study published in the Marine Pollution Bulletin. The study seeks to document the damage and danger of the throwaway plastic that has surged in use around the world and in the UAE, along with other marine debris. (Photo by Kamran Jebreili/AP Photo) 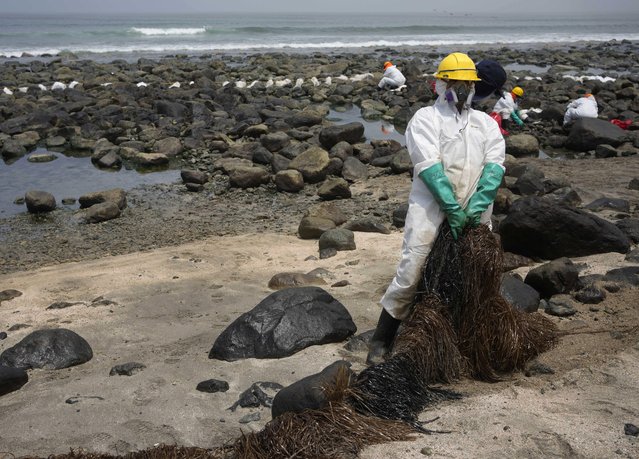 A worker holds a type of skimmer that collects oil waste during a clean-up campaign on Pocitos Beach in Ancon, Peru, Tuesday, February 15, 2022. One month later, workers continue the clean-up on beaches after contamination by a Repsol oil spill. (Photo by Martin Mejia/AP Photo) 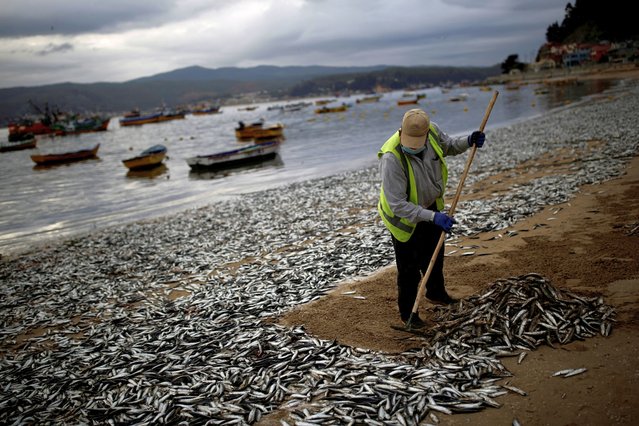