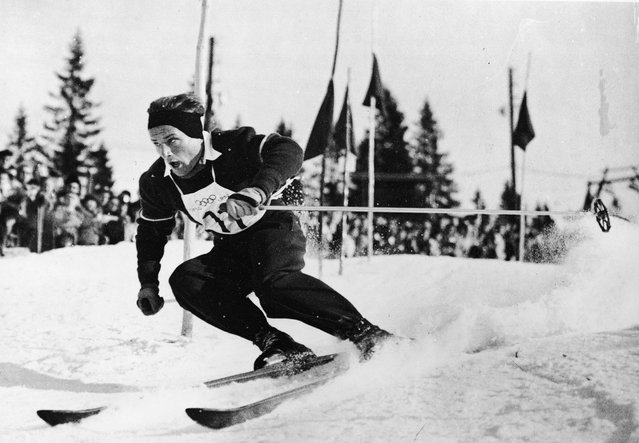 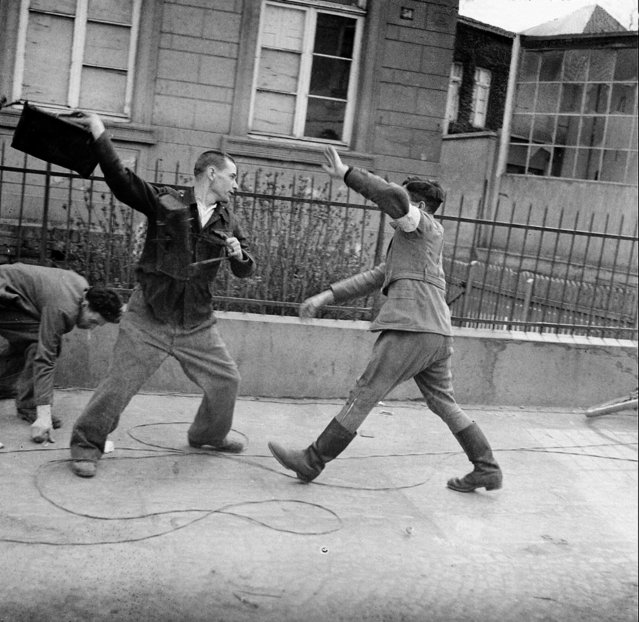 A former Russian slave laborer, left, who was released by the Allies after three years of forced labor in a German factory, unleashes his anger against a German civilian policeman on a street in Bonn, Germany, April 3, 1945 during World War II. (Photo by William C. Allen/AP Photo) 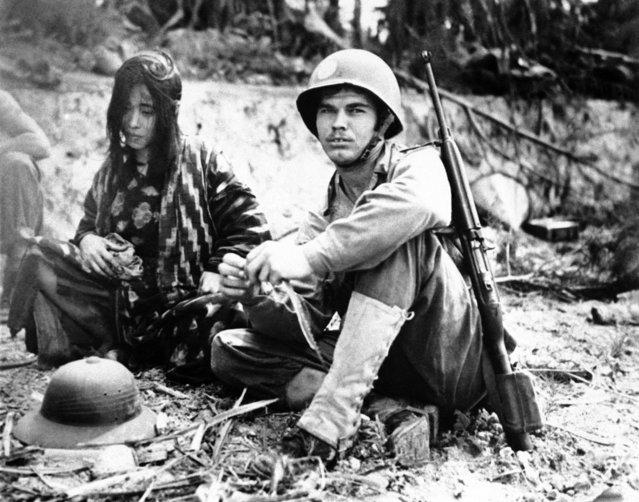 Coaxed out of a hole on the beach on Okinawa, Japan on April 6, 1945, in which she had been hiding, a civilian woman, her hair streaming across her face is seated alongside Gerald Leslie of Los Angeles, California. (Photo by AP Photo/Pool) 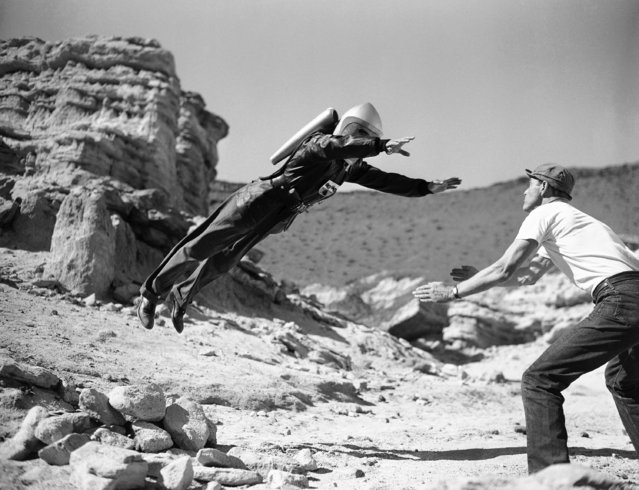 “Commando Cody, the Sky Marshal of the Universe”, aka, George Wallace, appears to defy the laws of gravity, for a moment at least, as he lands in the arms of a prop man during production of the film “Radar Men from the Moon”, at Red Rock Canyon in the Mojave Desert, 80 miles northeast of Hollywood, Calif., December 12, 1951. Gravity may be defied in some the new movie serials based on the fantasies science fiction, but what goes up still comes down, even if the film wont let you see it. (Photo by AP Photo) 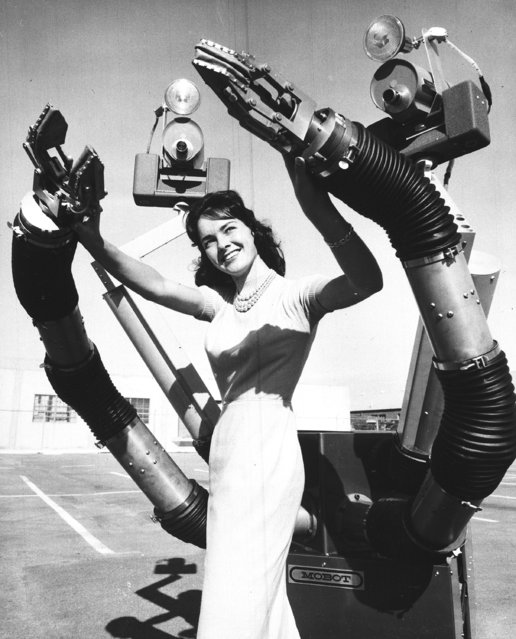 The tentacle-like arms of “Mobot Mark II”, a mobile robot built by Hughes Aircraft Company of Culver City, Calif., close in on Colleen Adams as it demonstrates its almost human actions on December 13, 1960. The robot was designed to perform tasks in areas too dangerous for humans. The six foot arms are double-jointed at shoulder, elbow and wrist, and television camera “eyes” transmit images of the robot's performance to a human operator at a remote control console. (Photo by AP Photo) 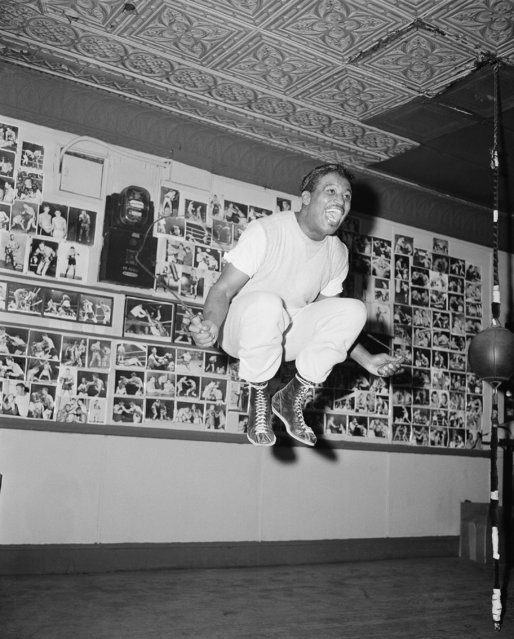 Middleweight Champion Sugar Ray Robinson breaks into a laugh as he skips rope while training for his title bout with Gene Fullmer at a gymnasium in New York on December 28, 1956 . Robinson was reported in “excellent condition” for the big fight. (Photo by AP Photo) 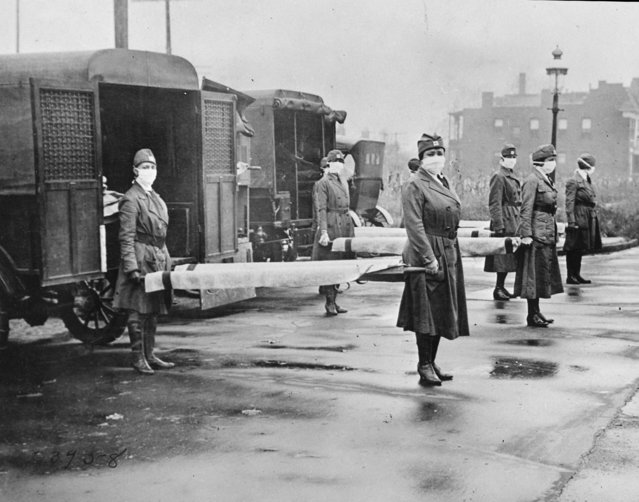 In this October 1918 photo made available by the Library of Congress, St. Louis Red Cross Motor Corps personnel wear masks as they hold stretchers next to ambulances in preparation for victims of the influenza epidemic. A century after one of history’s most catastrophic disease outbreaks, scientists are rethinking how to guard against another super-flu like the 1918 influenza that slaughtered tens of millions as it swept the globe in mere months. (Photo by Library of Congress via AP Photo) These two unidentified Halloween pranksters may not get to heaven on their roller skates, but they do just fine getting around Denver. Wednesday's pleasant temperatures made it a nice day to roll along Speer Boulevard near University Boulevard, 1982. (Photo by Anthony Suau/The Denver Post) 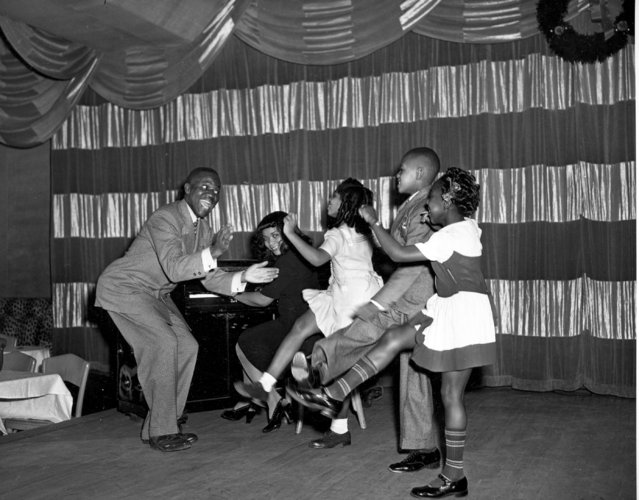 Tap dancer Bill Robinson, known as Bojangles, far left, is assisted by Mary Bruce on piano as he leads young dancers to the “Charleston Walk” in New York City on December 27, 1944. The children, from left, are, Dorothy Williams, 6; John Whitefield, 8; and Dolgres Jackson, 5. (Photo by AP Photo) Sgt. Tony J. Fruio, El Paso, Tex., blows a sour note on a Chinese bugle to the intense discomfort of his buddy, Cpl. Hugh Cole (right) of St. Charles, Ill. on February 2, 1951. The bugle, picked up in an enemy position near Yangji, of west-central Korean front, is type used by the Chinese troops during attack. (Photo by Max Desfor/AP Photo) 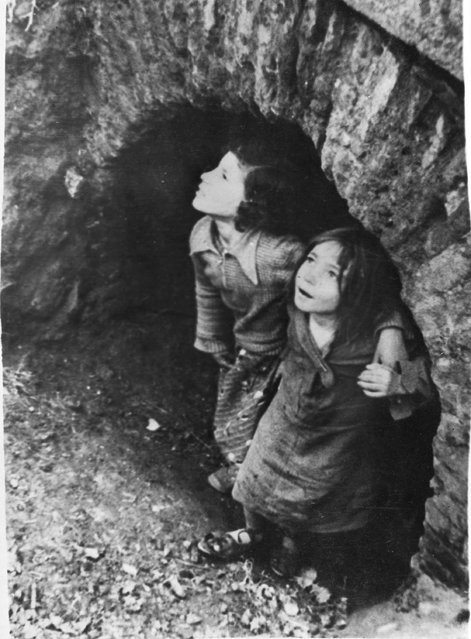 Two young girls take refuge in the mouth of a sewer during a fascist raid in Madrid, Spain, February 8, 1937, during the Spanish Civil War. Weeks of such raids seem to have made them more interested than frightened of the falling bombs. (Photo by AP Photo) 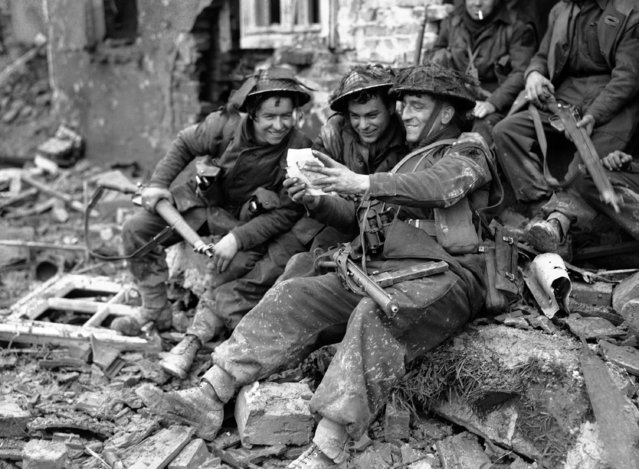 Happiness registers on the faces of these British soldiers as they read their first mail on German soil, amid the ruins of a German village, on the road to the Rhine on February 15, 1945. From left to right; Private J. Laird, from Scotland, Private J. Bryce, from Scotalnd and Corporal D. Devine from England. (Photo by AP Photo) 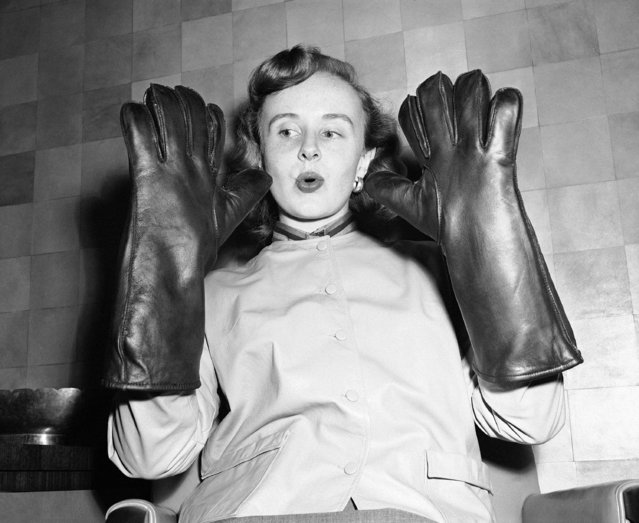 Florence Brown of the Department of Commerce, gives with an “Oh, look what I've got” expression as she holds up a pair of lead impregnated atomic gloves at the leather exhibition in Washington, February 23, 1954. The gloves are just the thing if you want to split an atom and have the $60 to pay for them. The jacket she is wearing is not atomic attire it is part of a leather suit costing $95. (Photo by William J. Smith/AP Photo) 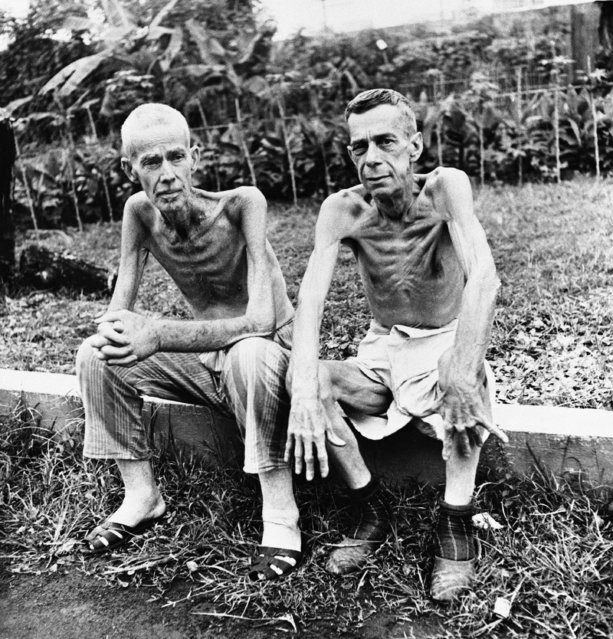 They're free at last, but the appearance of Lee Roger (left), 68, a retired Cavite Navy Yard employe, and John C. Todd, 63, a miner on February 23, 1945, bears witness to the rigors of their life in the Japanese interment camp at Santo Tomas University, Manila, P.I. Rogers' weight dropped from 145 pounds to 90 during his internment and Todd's from 178-102. This photo made by Life Photographer Carl Mydans for the wartime still picture pool. (Photo by AP Photo/Pool) 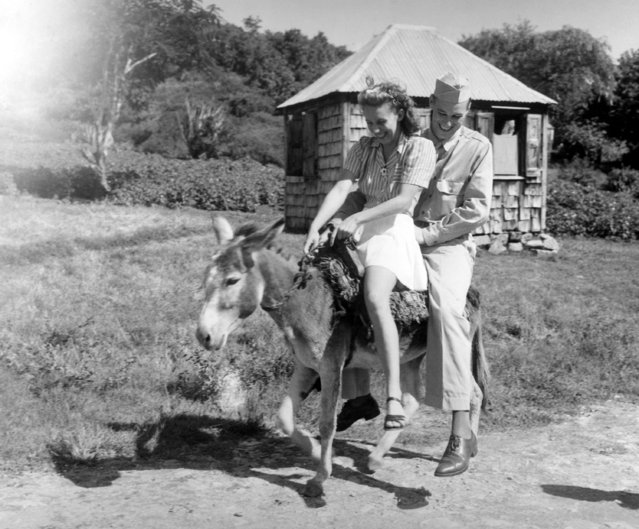 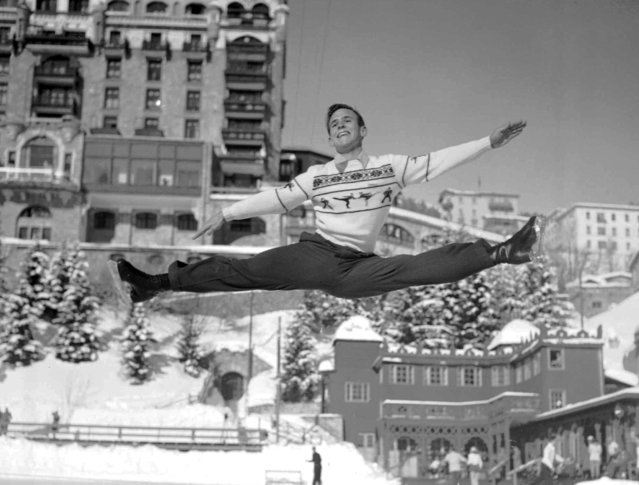 Richard Button of Englewood, N.J. who will represent the United States in the men's figure skating competition at the Winter Olympics at St. Moritz, Switzerland, makes a sensational leap during practice there, January 27, 1948. Button recently won the European figure skating for men in competition at Prague, Czechoslovakia. Opening ceremonies for the St. Moritz games will take place Jan. 30, 1948. (Photo by AP Photo) 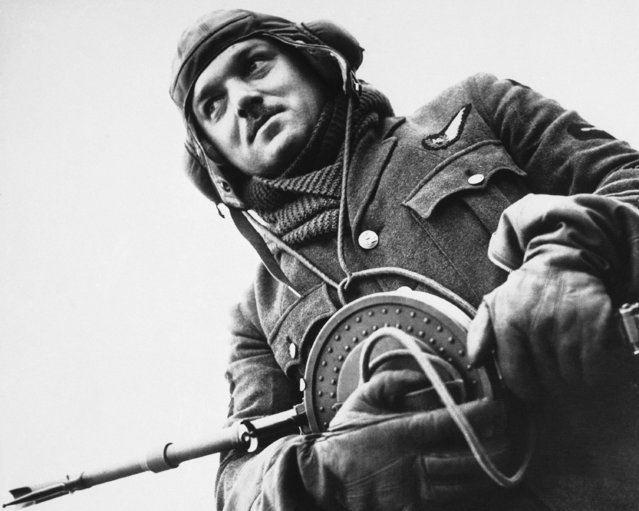 This is a British Royal Air force gunner shown March 21, 1940, the man who parks himself in turret aboard a bombing plane and fights off attack ships with machine guns. He's the man who fires the guns during such raids as the British made on the German seaplane base on the island of SYLT. (Photo by AP Photo) 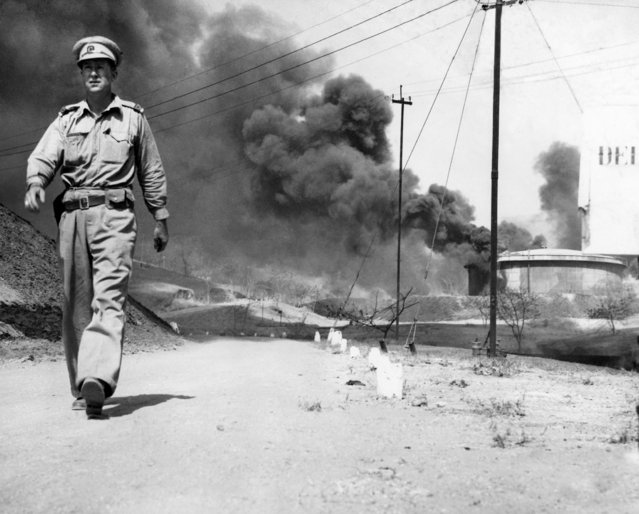 Japanese forces driving through Yenangyaung and Mandalay in Burma during April and May found little left of the cities except charred ruins and heaps of blackened debris. Before the fall of Yenangyaung, April 21, 1942, the skies were afire with the blazing skeletons of oil-field derricks. Steel structures were warped by bonfires lighted beneath them; machinery was destroyed and repair shops were razed. Destruction of the city was completed over a three week period of time. All that remained to be burned on the last day were houses kept intact until the last minute for the use of evacuees and troops. The $1,000,000 power plant running the Yenangyaung oil fields was blown to pieces. At Mandalay the story was the same. The pagoda-crowned city which fell to the Japanese on May 2, was deserted and in ruins-mostly caused by Japanese bombings, partly by the scorched earth policy of the evacuating British forces, partly by the work of fifth columnists and looters. (Photo by AP Photo) Mae Zelinsky, left, and Betty O'Beda test ammunition on a .30 caliber rifle at a Remington Arms plant on April 30, 1943. Many women took over jobs that were left vacant when men went overseas to fight in World War II. (Photo by AP Photo) 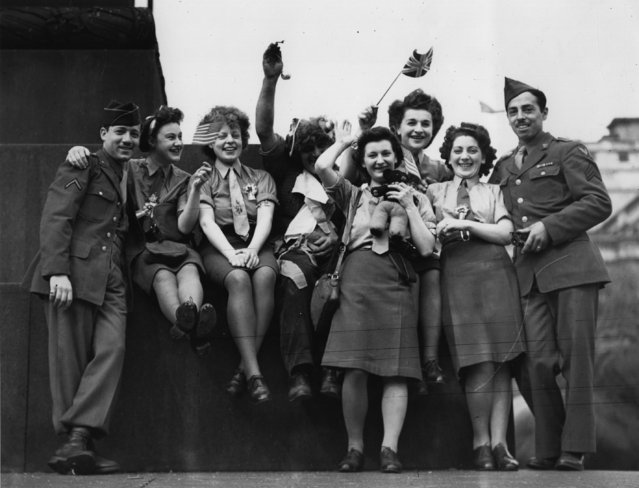