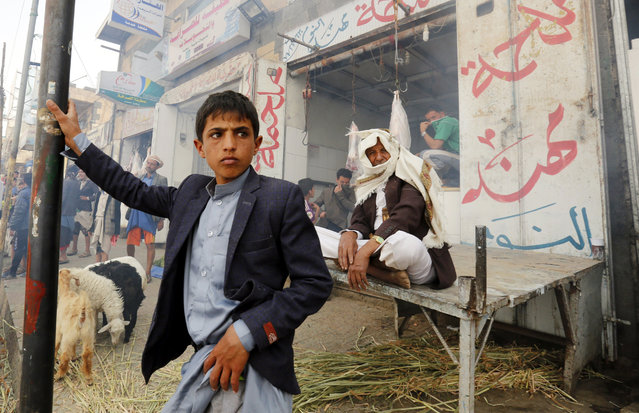 Yemenis look on during a nationwide anti-cholera campaign, on the outskirts of Sana’a, Yemen, 16 July 2017. According to reports, an acute cholera outbreak has spread widely in Yemen since late April with more than 332,600 suspected cholera cases and over 1,759 cholera deaths. (Photo by Yahya Arhab/EPA) 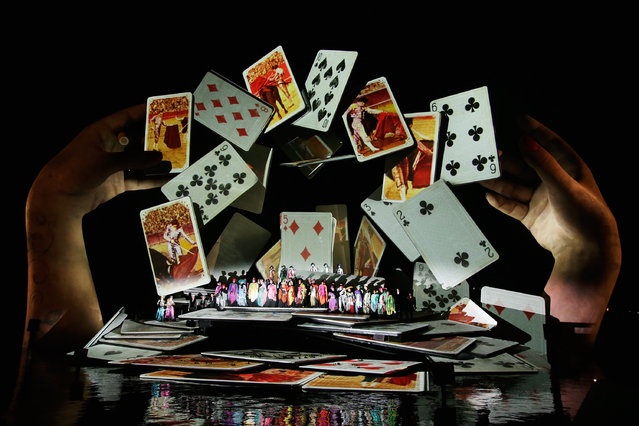 General view of the Seebuehne floating stage design, seen during the rehearsal of the opera “Carmen” prior the Bregenz Festival (Bregenzer Festspiele) on July 14, 2017 in Bregenz, Austria. (Photo by Johannes Simon/Getty Images) 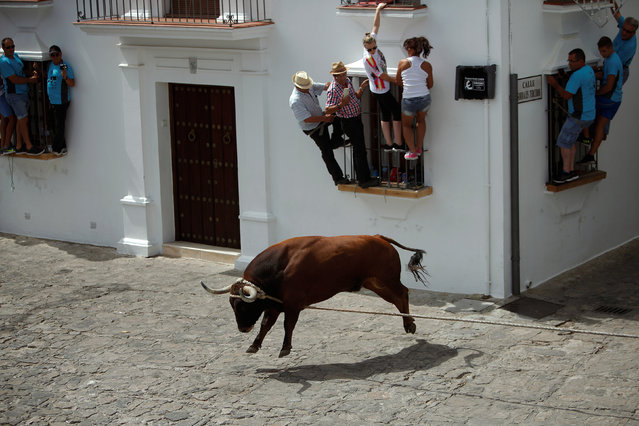 People hold onto windows to avoid a bull, named Trompetero, during the “Toro de Cuerda” (Bull on Rope) festival in Grazalema, Spain, July 17, 2017. Three bulls restrained by a rope are allowed to run through the streets of the village during the annual festival. (Photo by Jon Nazca/Reuters) 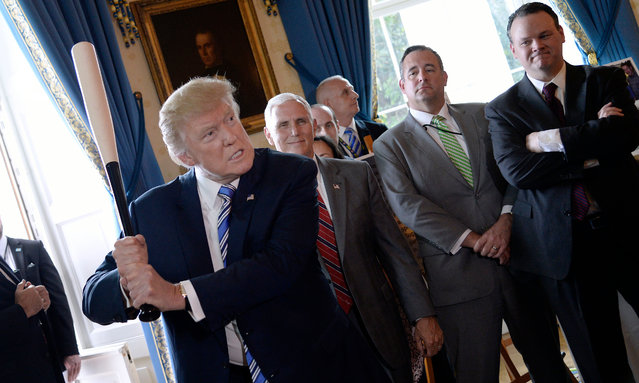 US President Donald Trump examines US- made products from all 50 states, including a Marucci baseball bat, in the Blue Room of the White House during a “Made in America” product showcase event in Washington, DC, on July 17, 2017. (Photo by Olivier Douliery/AFP Photo) 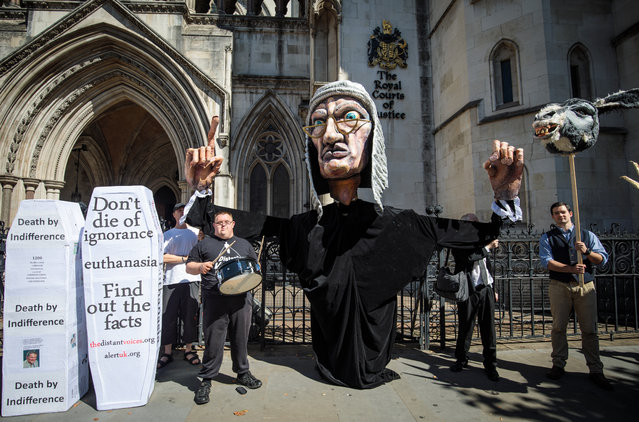 Supporters from the group Distant Voices, who oppose the liberalisation of euthanasia laws, demonstrate with a giant puppet of a judge outside the Royal Courts of Justice, Strand on July 17, 2017 in London, England. Noel Conway, 67, who is terminally ill with motor neurone disease, is seeking a legal challenge on the law banning assisted dying. (Photo by Jack Taylor/Getty Images) 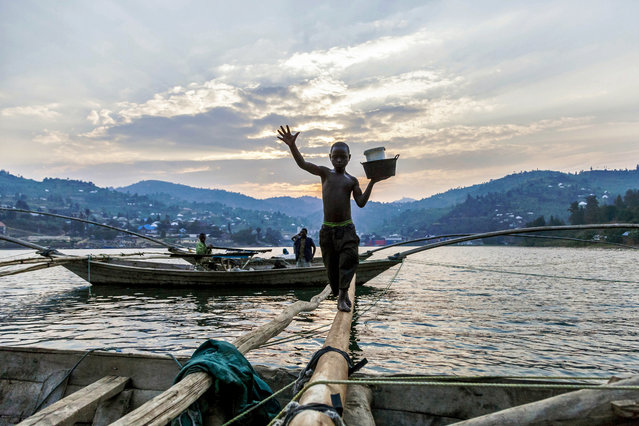 Izabayo, 13 years old, leaves the boat where he spent the night with 10 other fishermen after another fishing night at Lake Kivu, Rwanda on July 17, 2017. Izabayo has worked with the fishermen since he was 8 years old. (Photo by Natalia Jidovanu/AFP Photo) 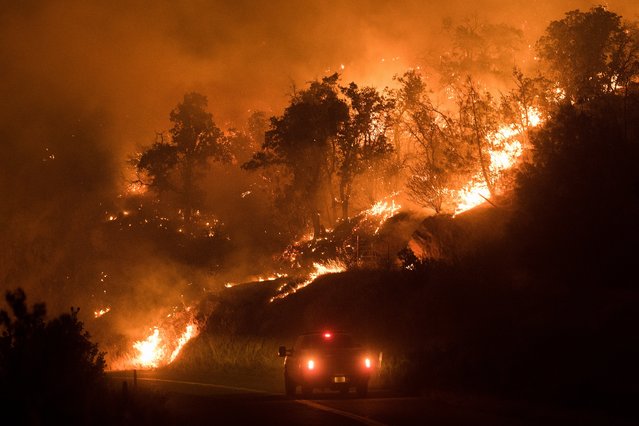 Flames from the Detwiller fire spread down a hillside near Mariposa, California, USA, 17 July 2017. Reports state that road closures and evactuation orders are in place as the fire is affecting around 2,500 acres. (Photo by Noah Berger/EPA) 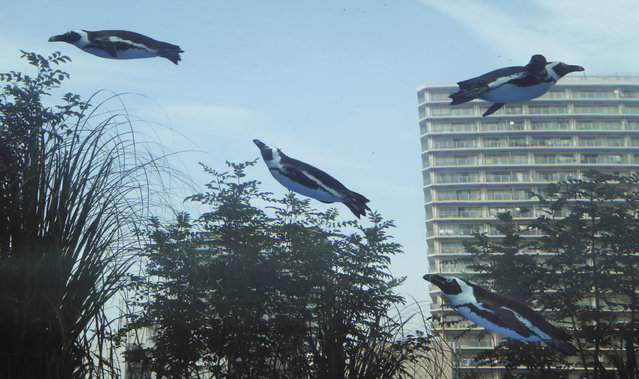 African penguins swim in a water tank placed on the roof of an aquarium in Tokyo, Monday, July 17, 2017. (Photo by Koji Sasahara/AP Photo) 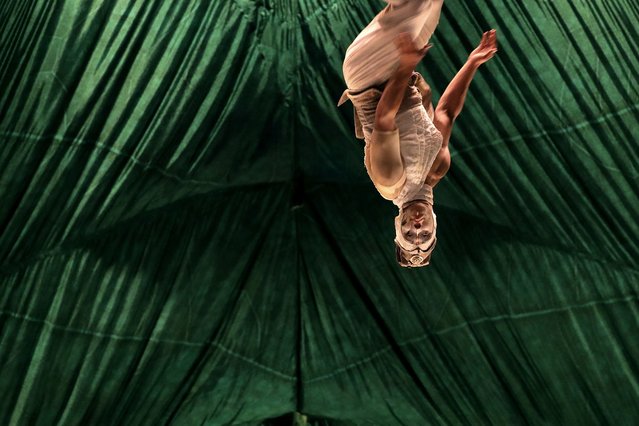 An acrobat does a flip mid-air during a media preview of Cirque Du Soleil's Kooza Tuesday, July 11, 2017, in Singapore. Kooza is a return to the origins of Cirque du Soleil, combining two circus traditions of acrobatic performance and the art of clowning. The name Kooza is inspired by the Sanskrit word “koza” which means “box”, or “treasure”, and was chosen because of the underlying concept of the production, which is the idea of a “circus in a box”. (Photo by Wong Maye-E/AP Photo) 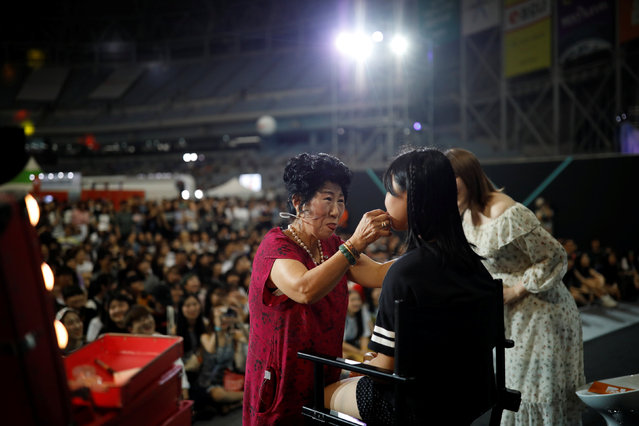 Park Mak-rye, a 70-year-old YouTuber, puts on makeup on a volunteer at a makeup show during DIA Festival in Seoul, South Korea, July 16, 2017. Park’s videos are all about showing off her wrinkles and her elderly life in the raw. Young South Koreans find her so funny and adorable that big companies like Samsung Electronics and Lotte are banking on her popularity. But despite her new life as a celebrity, she still gets up before dawn to run her diner. (Photo by Kim Hong-Ji/Reuters) 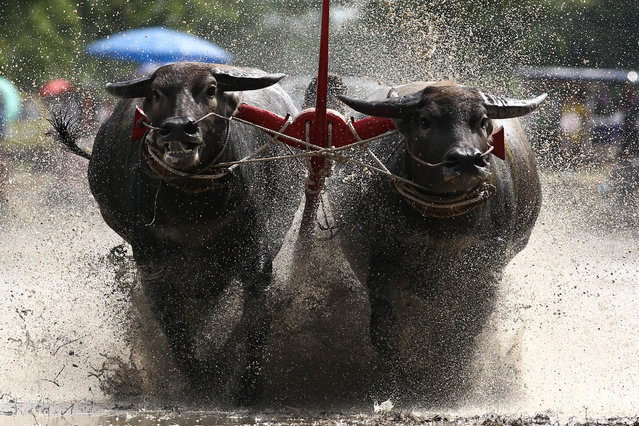 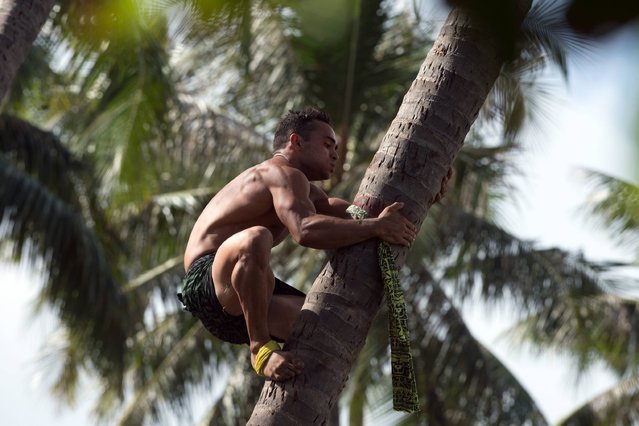 A man climbs in a tree as he compets in the first world championship of coconut palm climbing, in Papeete, on July 15, 2017 as part of the great cultural festival of Polynesians. For the occasion the first world championships of coconut palm climbing was organised. Competitors came from French Polynesia (Tahiti, Bora Bora, Huahine and the Australes), but also from all the Pacific, from Hawaii or the Samoa Islands to take part in the race. (Photo by Gregory Boissy/AFP Photo)

A firefighting plane drops water to extinguish a forest fire near Zadar, Croatia July 16, 2017. Croatian firefighters are battling to control a forest fire along the Adriatic coast that has damaged and destroyed buildings in villages around the city of Split, reaching the Split suburbs late this evening. Some parts of the city were without water or electricity. Prime Minister Andrej Plenkovic said that if necessar yCroatia might consider asking for help from its European Union partners. (Photo by Edin Tuzlak/Reuters) 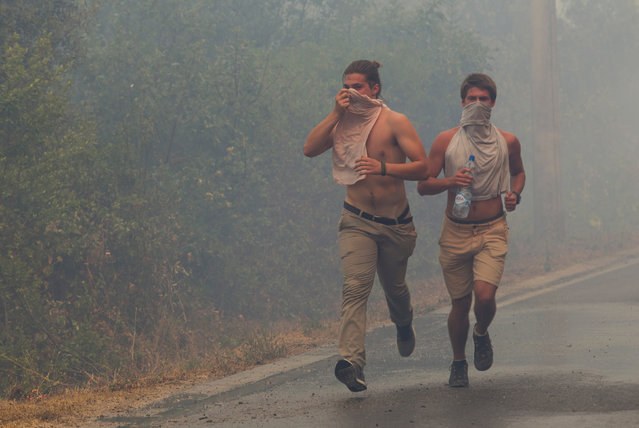 Tourists run through smoke during a forest fire at Lustica peninsula near Tivat, Montenegro, July 17, 2017. (Photo by Stevo Vasiljevic/Reuters) 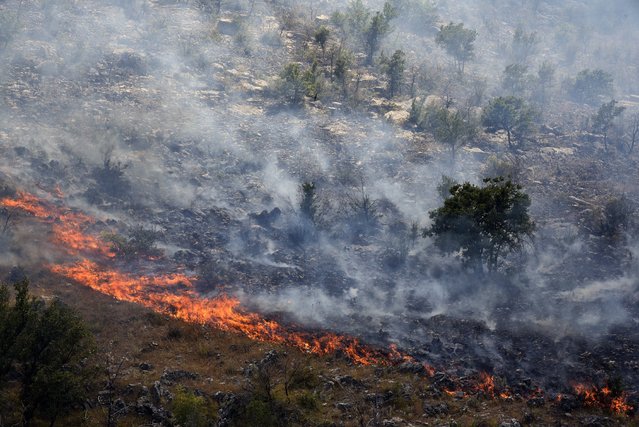 Smoke rises from trees burned by wildfire on a mountain near Montenegro capital Podgorica, Monday, July 17, 2017. At least 100 tourists have been forced to evacuate from a coastal area in Montenegro that has been the hardest hit by the blaze. Fueled by strong winds and dry weather, the fire on the Lustica peninsula in southern Montenegro has spread near to homes and camping zones. (Photo by Risto Bozovic/AP Photo) 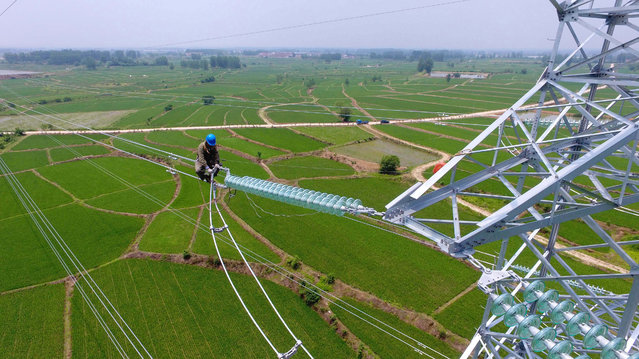 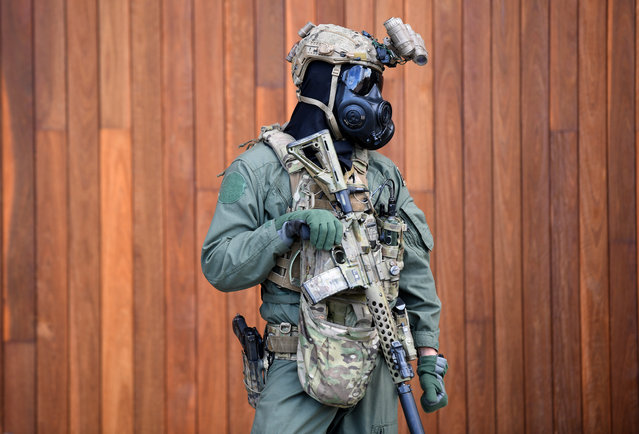 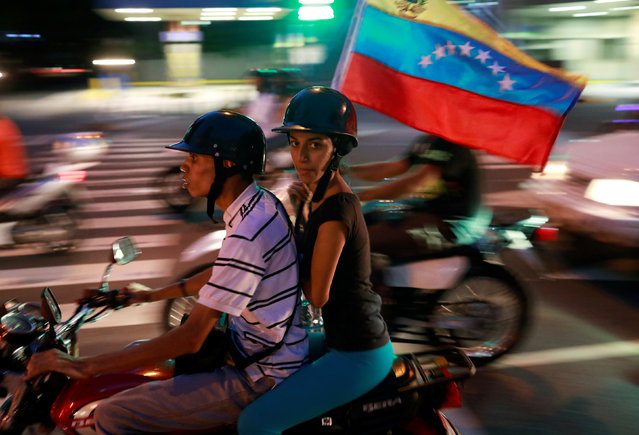 Opposition supporters ride on a motorcycle after an unofficial plebiscite against President Nicolas Maduro's government and his plan to rewrite the constitution, in Caracas, Venezuela July 16, 2017. (Photo by Marco Bello/Reuters) 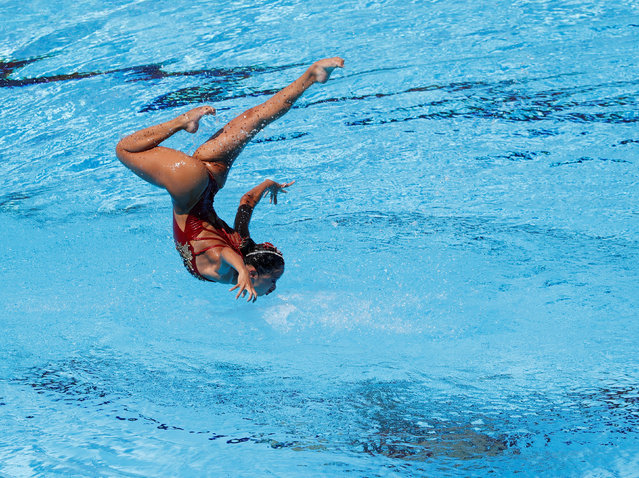 This picture taken with an underwater camera shows Japan' s Yumi Adachi competing in the Mixed Duet technical final during the synchronised swimming competition at the 2017 FINA World Championships in Budapest, on July 17, 2017. (Photo by Bernadett Szabo/Reuters) 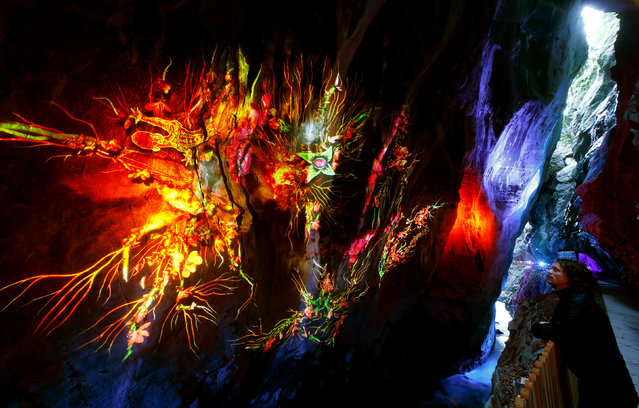 Projektil Medialable creative director Roman Beranek looks on a light projection, which is part of the “Light Ragaz” multimedia project, in the Taminaschlucht gorge near Bad Ragaz, Switzerland July 16, 2017. (Photo by Arnd Wiegmann/Reuters) 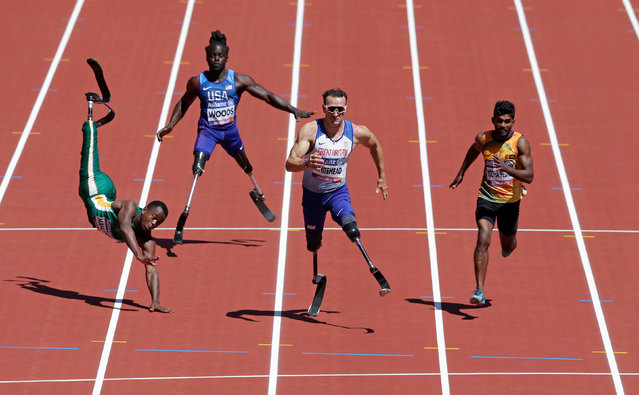 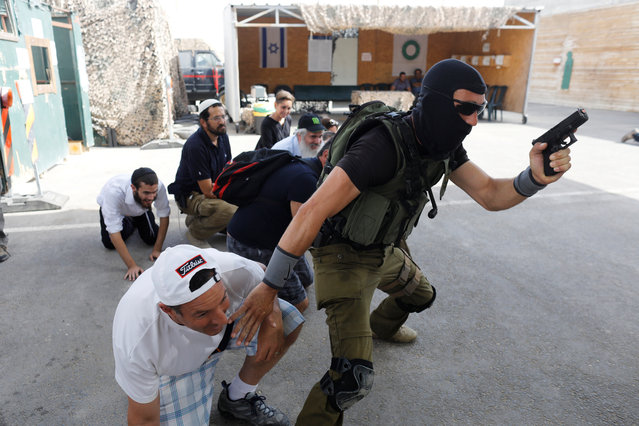 A group of tourists take part in a two hour “boot camp” experience, at “Caliber 3 Israeli Counter Terror and Security Academy” in the Gush Etzion settlement bloc south of Jerusalem in the occupied West Bank on July 13, 2017. It is part of a counter-terrorism “boot camp” organised by Caliber 3, a company set up by a colonel in the Israeli army reserves. (Photo by Nir Elias/Reuters) 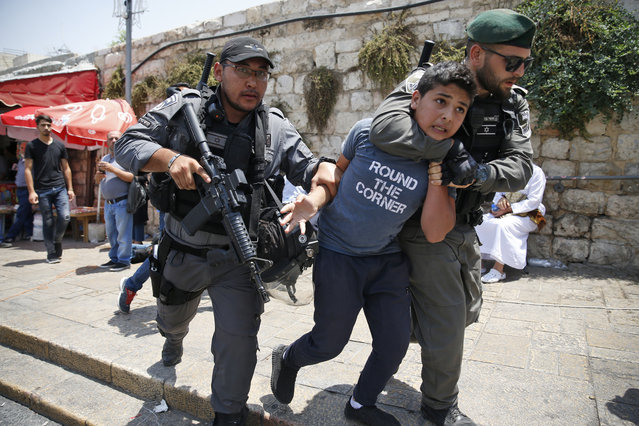 Israeli border guards detain a Palestinian youth during a demonstration outside the Lions Gate, a main entrance to Al-Aqsa mosque compound, due to newly-implemented security measures by Israeli authorities which include metal detectors and cameras, in Jerusalem's Old City on July 17, 2017. Israel reopened the ultra-sensitive holy site, after it was closed following an attack by Arab Israeli men in which two Israeli policemen were killed. (Photo by Ahmad Gharabli/AFP Photo) 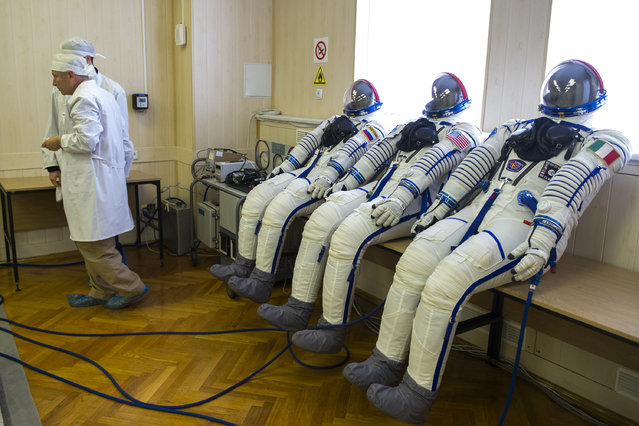 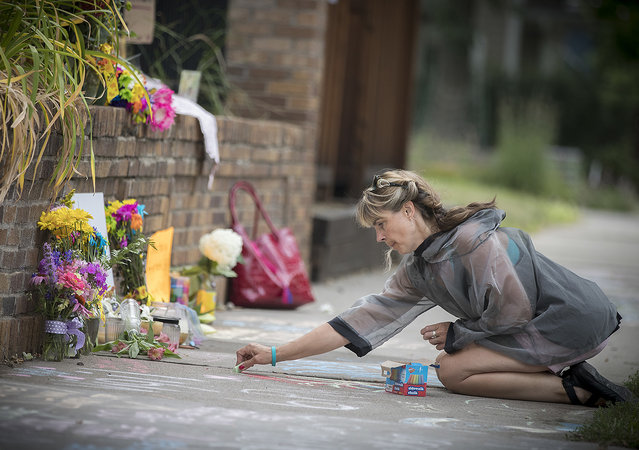 Megan O'Leary, of St. Paul, leaves a message on the sidewalk near the scene where a Minneapolis police officer shot and killed Justine Damond, of Australia, Monday, July 17, 2017, in Minneapolis. Relatives and neighbors of the Australian woman fatally shot by Minneapolis police over the weekend demanded answers Monday about the mysterious shooting in which the meditation teacher was reportedly killed by an officer who fired from the passenger seat of a squad car as the woman stood outside the driver's door. (Photo by Elizabeth Flores/Star Tribune via AP Photo) 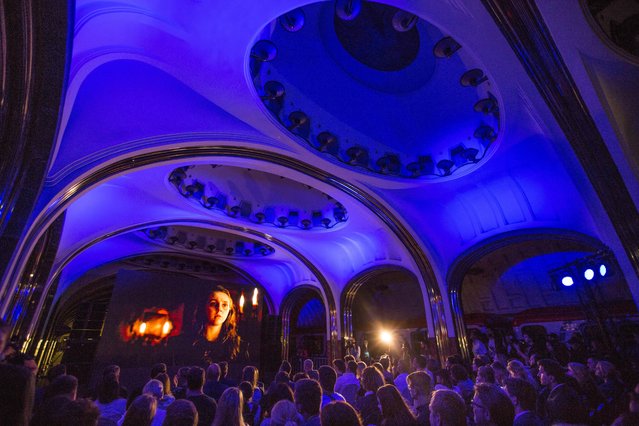 Spectators watch the premiere of the “Game of Thrones” television series, just one day after its premiere in the U.S. during the Night in the Metro at Mayakovskaya subway station in Moscow, Russia, early Tuesday, July 18, 2017. Night in Moscow's Metro is the cultural project which pass several times in a year during a night in Moscow's subway. (Photo by Alexander Zemlianichenko/AP Photo) 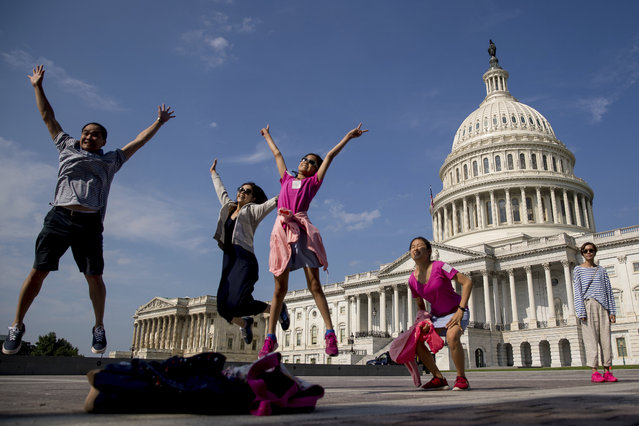 Tourists pose for a photograph in front of the Capitol Building in Washington, Monday, July 17, 2017. The Senate has been forced to put the republican's health care bill on hold for as much as two weeks until Sen. John McCain, R-Ariz., can return from surgery. (Photo by Andrew Harnik/AP Photo) 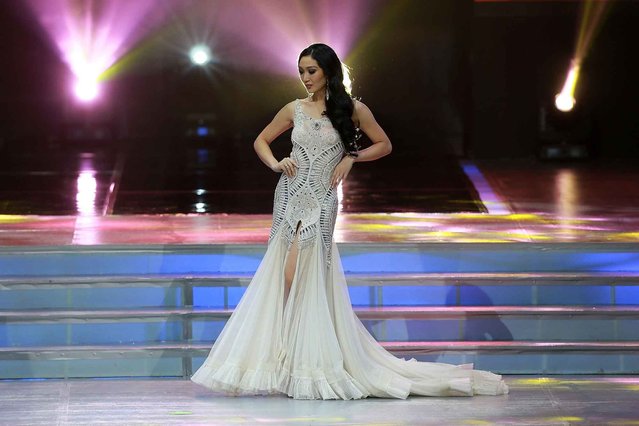 A contestant wearing a costume poses onstage during the 2017 Miss Philippines Earth coronation night in Pasay City, the Philippines on July 15, 2017. A total of 40 candidates vied for the crown that will represent the country in the 2017 Miss Earth beauty pageant. (Photo by Rouelle Umali/Xinhua)
Edit Del
18 Jul 2017 09:04:00, post received 0 comments
Publication archive:
←   →
Popular tags:
All tags
Last searches: