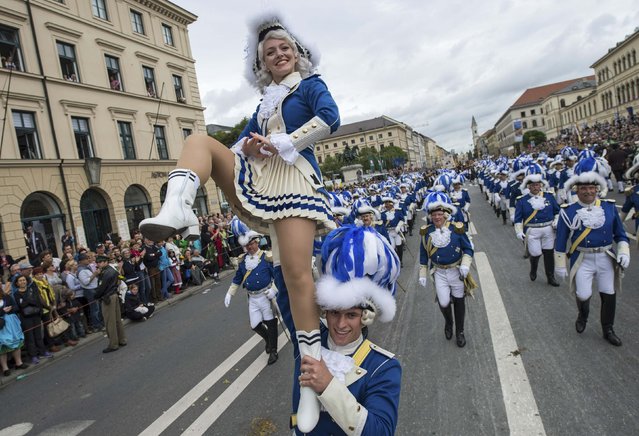 People dressed in traditional clothes take part in the Oktoberfest parade in Munich September 21, 2014. Millions of beer drinkers from around the world will come to the Bavarian capital over the next two weeks for the 181th Oktoberfest, which runs until October 5, 2014. (Photo by Lukas Barth/Reuters) 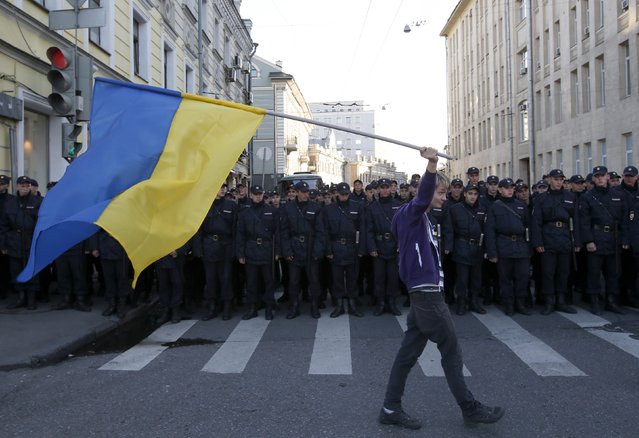 A man with a Ukrainian flag walks past riot police standing guard during an anti-war rally in Moscow, September 21, 2014. Thousands of Russians marched in protest against the armed conflict in Ukraine on Sunday in the first major anti-war rally since the start of the standoff between Kiev and pro-Russian rebels. (Photo by Maxim Zmeyev/Reuters) 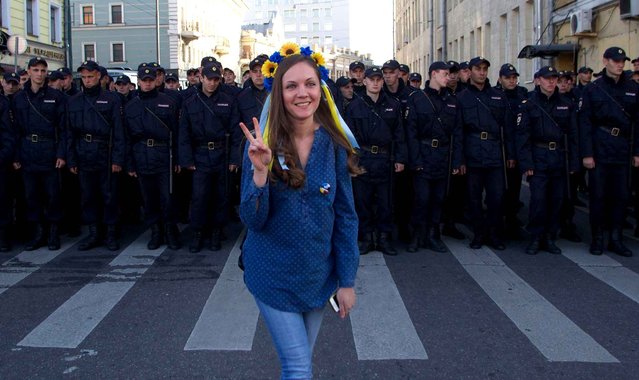 A woman wearing traditional Ukrainian flower headband poses for a photo in front of police officers, during an anti-war rally in downtown Moscow, Russia, Sunday, September 21, 2014. Thousands of people were marching through central Moscow to demonstrate against the fighting in Ukraine. (Photo by Denis Tyrin/AP Photo) 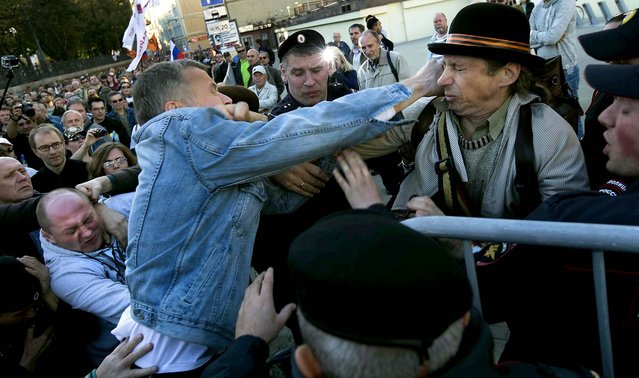 Pro and anti demonstrators clash during an anti-war rally and march in downtown Moscow, Russia, Sunday, September 21, 2014. Thousands of people are marching through central Moscow to demonstrate against the fighting in Ukraine and Russia’s alleged complicity in the conflict. (Photo by Pavel Golovkin/AP Photo) 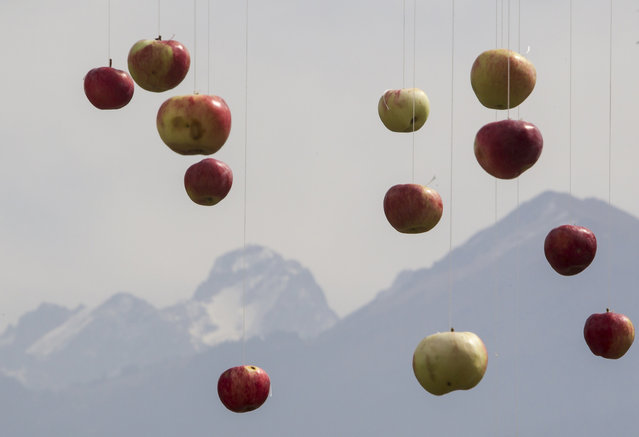 Apples hanging from strings are seen with the Tien Shan mountains inn background during the Apple Festival at City Day celebrations in Almaty September 21, 2014. The name Almaty derives from the Kazakh word “alma”, which means “apple”. (Photo by Shamil Zhumatov/Reuters) 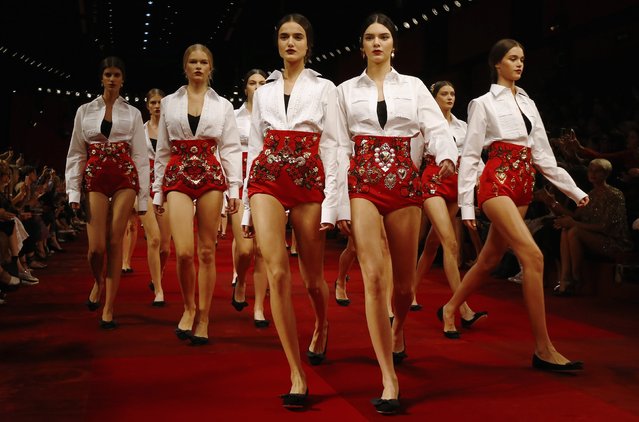 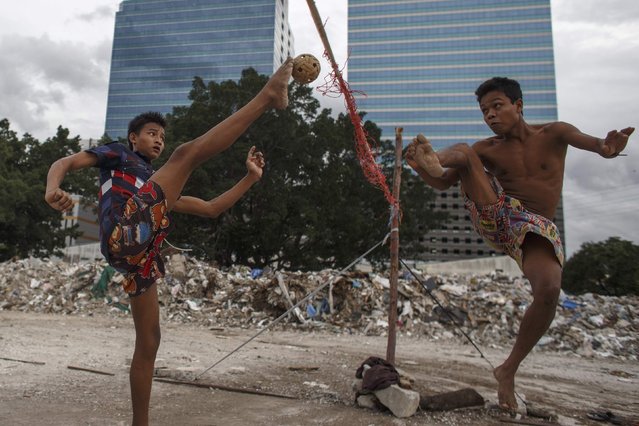 Migrant workers play sepak takraw in Bangkok September 17, 2014. The sport, native to Southeast Asia, sees players use any part of their bodies except their hands and arms to send a rattan ball into the opposing court. Thailand has dominated the sport since it was introduced at the 1990 Beijing Games, winning 18 of the 27 golds awarded. There are six golds on offer in this year's games, which are held in Incheon. (Photo by Athit Perawongmetha/Reuters) 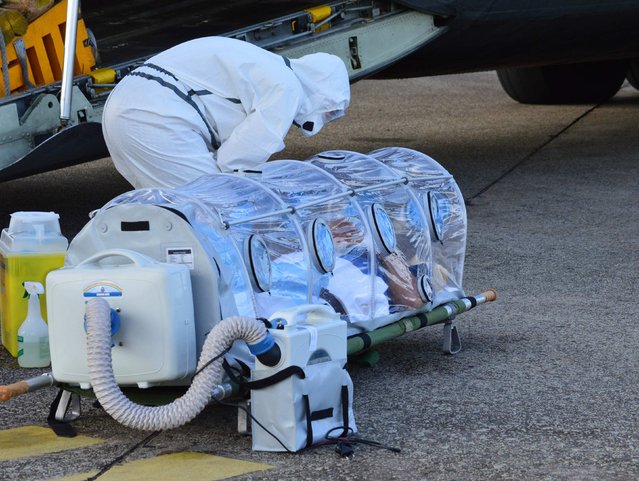 A Spanish health worker looks at Ebola patient, Catholic priest Manuel Garcia Viejo, before loading him into a Spanish Air Force transport plane at Lungi airport in Freetown, for his repatriation to Spain for treatment September 21, 2014. Garcia Viejo is the second Spanish priest to be diagnosed with Ebola after Miguel Pajares, also a member of San Juan de Dios, who died last month days after being brought back to Spain from Liberia. (Photo by Reuters/Ministry of Defence) 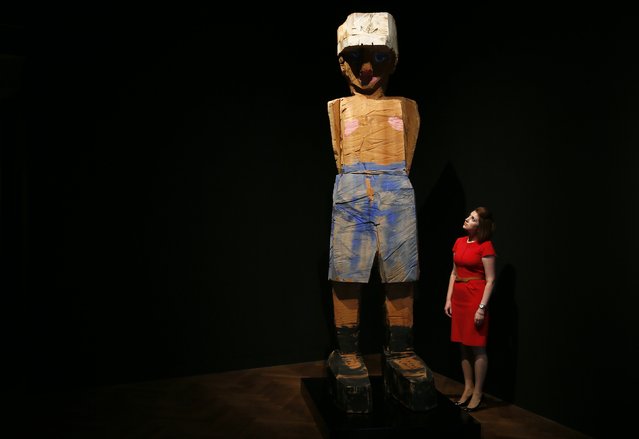 A Christie's assistant poses for photographers with Georg Baselitz's “Meine neue Mutze” at Christie's auction house in London September 22, 2014. The piece is estimated to be worth between 1.5 million and 2 million pounds ($2.5million – 3.3million) when it comes to auction in London on October 13 as part of the Christie's Essl Collection. (Photo by Stefan Wermuth/Reuters) 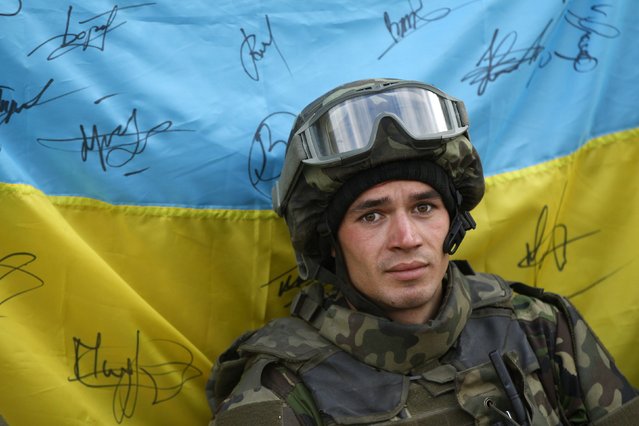 A Ukrainian serviceman sits at a checkpoint during a prisoners-of-war (POWs) exchange near Luhansk, eastern Ukraine, September 22, 2014. (Photo by David Mdzinarishvili/Reuters) 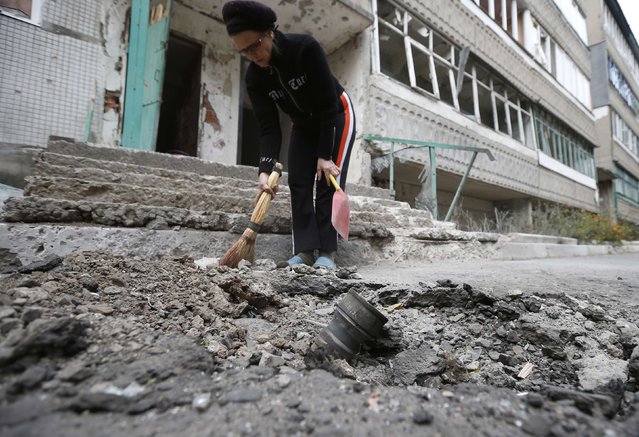 A resident clears debris next to a crater with the remains of a rocket shell after a shelling a day before, in the eastern Ukrainian town of Debaltseve, September 22, 2014. (Photo by David Mdzinarishvili/Reuters) 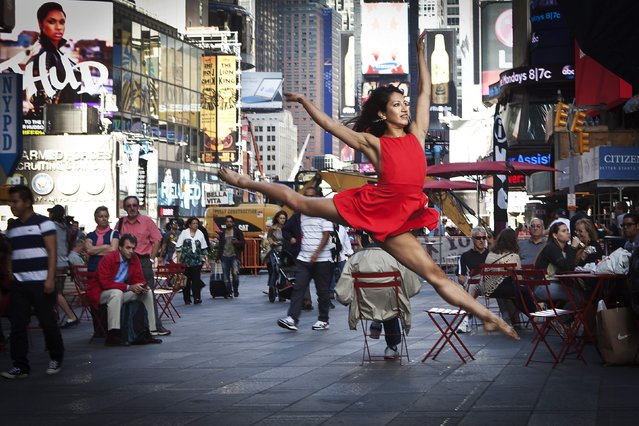 A dancer poses for a photograph as part of the “Dance as Art” photo project in Times Square in New York September 22, 2014. The project is a celebration of dancers and their place in the New York experience. (Photo by Carlo Allegri/Reuters) 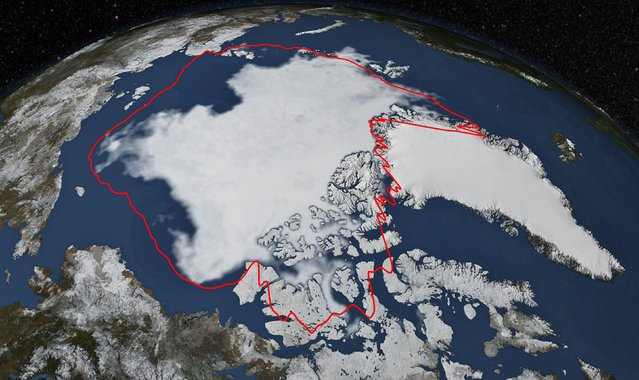 Arctic sea ice hits its annual minimum as seen in this satellite picture provided by the Japan Aerospace Exploration Agency GCOM-W1 satellite and NASA taken September 17, and released September 22, 2014. The red line in this image shows the 1981-2010 average minimum extent. Over the 2014 summer, Arctic sea ice melted back from its maximum extent reached in March to a coverage area of 1.94 million square miles (5.02 million square kilometers), according to analysis from NASA and NASA-supported National Snow and Ice Data Center (NSIDC) scientists. This year's minimum extent is similar to last year's and below the 1981-2010 average of 2.40 million square miles (6.22 million square km). (Photo by Reuters/NASA/Goddard Scientific Visualization Studio) 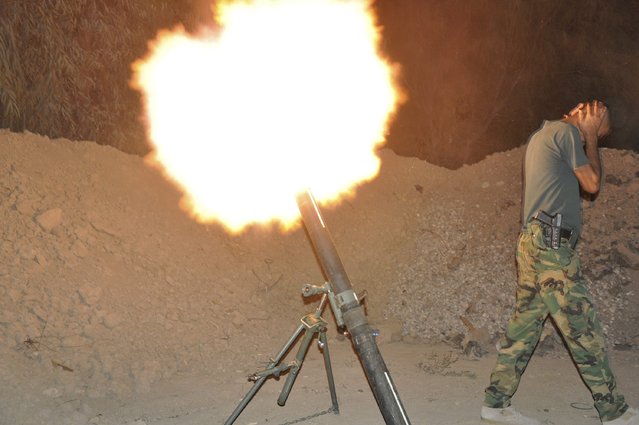 An Iraqi SWAT trooper covers his ears as he fires a mortar bomb during clashes with Islamic State militants, north of Muqdadiyah in Diyala province September 24, 2014. (Photo by Reuters/Stringer) 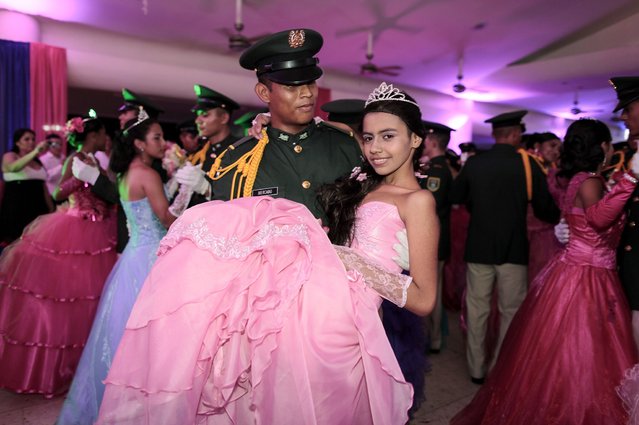 A cancer patient dances with a cadet from Nicaragua's Military Academy during her “Quinceanera” (15th birthday) party at a hotel in Managua September 20, 2014. A quinceanera is a traditional celebration for a girl turning 15. The Nicaragua's Association of Mother and Father of Children with Leukemia and Cancer (MAPANICA) organizes quinceaneras for cancer patients annually, and there were 44 celebrants in 2014. (Photo by Oswaldo Rivas/Reuters) 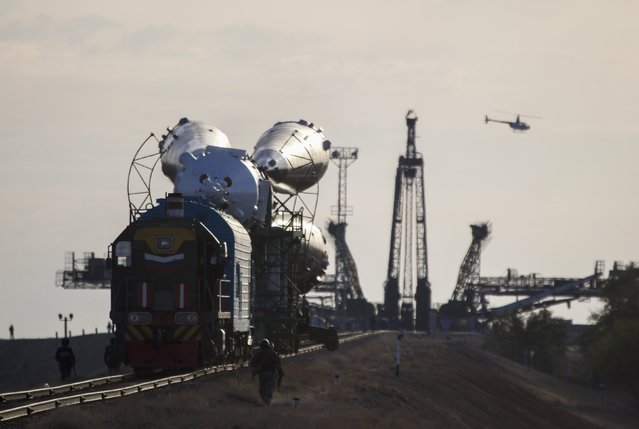 A helicopter flies past as the Soyuz TMA-14M spacecraft is transported to its launch pad at Baikonur cosmodrome September 23, 2014. The Soyuz is scheduled to carry Barry Wilmore of the U.S., Elena Serova and Alexander Samokutyaev of Russia to the International Space Station on September 26. (Photo by Shamil Zhumatov/Reuters) 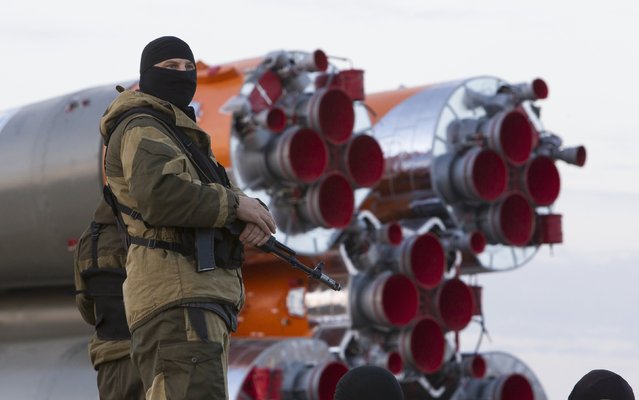 An armed security guard stands in front of the Soyuz TMA-14M spacecraft, as it is transported to its launch pad at Baikonur cosmodrome September 23, 2014. (Photo by Shamil Zhumatov/Reuters) 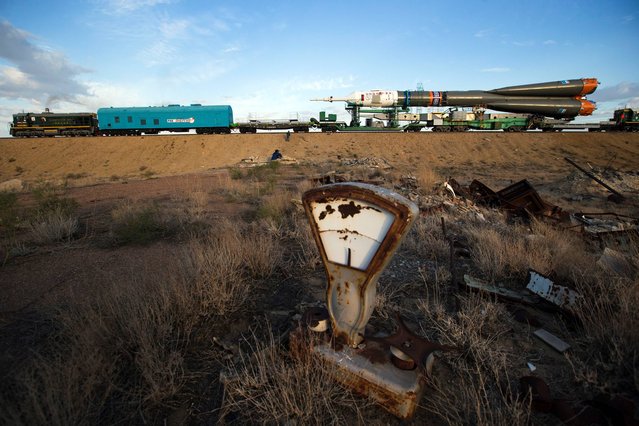 An old tossed out scales is scattered in a field as Russia's Soyuz-FG booster rocket with the space capsule Soyuz TMA-14M that will carry a new crew to the International Space Station (ISS) is transported from hangar to the launch pad at the Russian leased Baikonur Cosmodrome, Kazakhstan, Tuesday, September 23, 2014. (Photo by Pavel Golovkin/AP Photo) 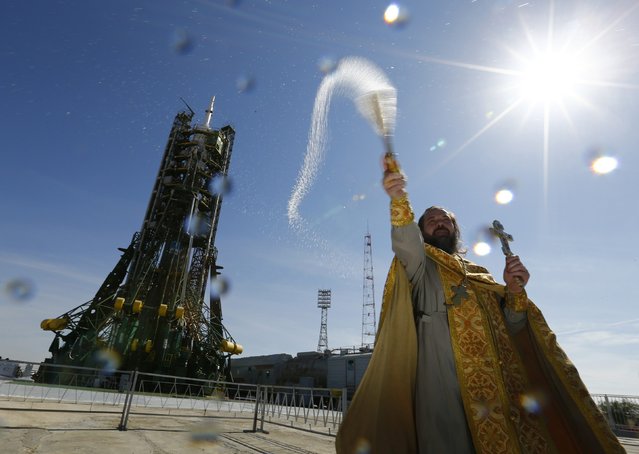 An Orthodox priest conducts a blessing in front of the Soyuz TMA-14M spacecraft set on the launch pad at Baikonur cosmodrome September 24, 2014. (Photo by Shamil Zhumatov/Reuters) 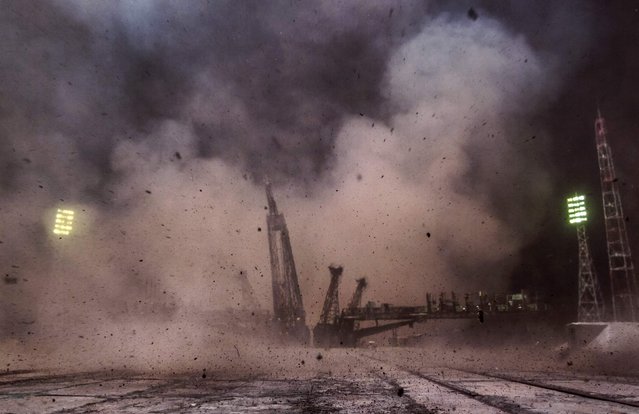 Debris flies after the Soyuz TMA-14M spacecraft carrying the International Space Station crew of Barry Wilmore of the U.S., and Alexander Samokutyaev and Elena Serova of Russia blasted off from the launch pad at the Baikonur Cosmodrome September 26, 2014. A Russian rocket blasted off from the Baikonur Cosmodrome in Kazakhstan to the International Space Station (ISS) on Friday, taking to orbit a U.S.-Russian trio including the first Russian woman to serve on the $100 billion space outpost. (Photo by Shamil Zhumatov/Reuters) 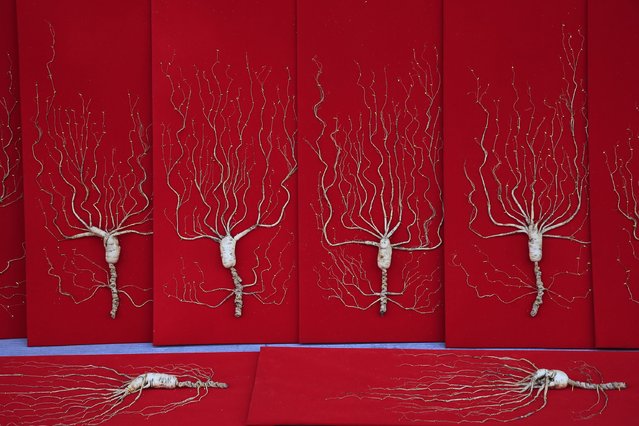 Ginsengs are seen on sale at a market in Baishan, Jilin province, September 22, 2014. Some 50-year-old ginsengs are displayed and each is worth at least approximately 150,000 yuan ($24,430), according to the seller. (Photo by Reuters/Stringer) 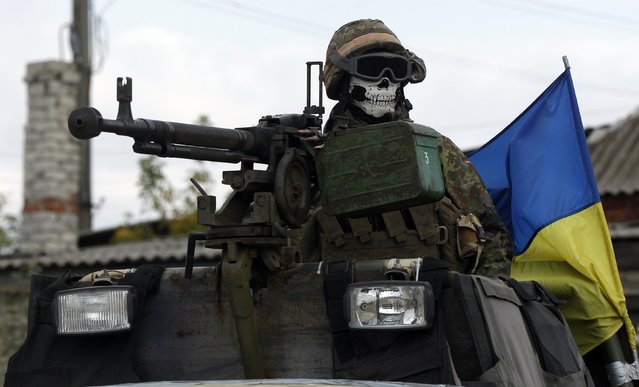 A Ukrainian serviceman rides on an armoured vehicle near the eastern Ukrainian town of Debaltseve, September 23, 2014. (Photo by David Mdzinarishvili/Reuters) 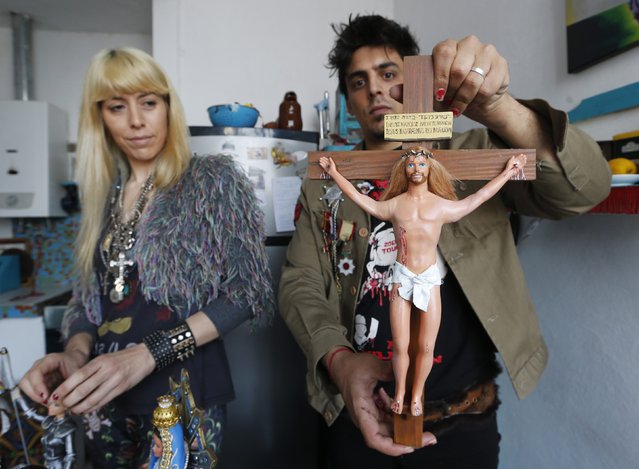 Artist Emiliano Paolini (R), and his partner Marianela Perelli, show their “Ken” doll that they have re-designed into the religious figure of Jesus Christ at their workshop in Rosario, north of Buenos Aires September 23, 2014. Paolini and Perelli have adapted religious figures such as Jesus Christ, Moses and the Virgin of Guadalupe to Mattel's line of Barbie and Ken dolls and are working on more religious figures, although they say they will not be using the Prophet Muhammad to avoid controversy. They plan to have a gallery show in Buenos Aires next October. (Photo by Enrique Marcarian/Reuters) 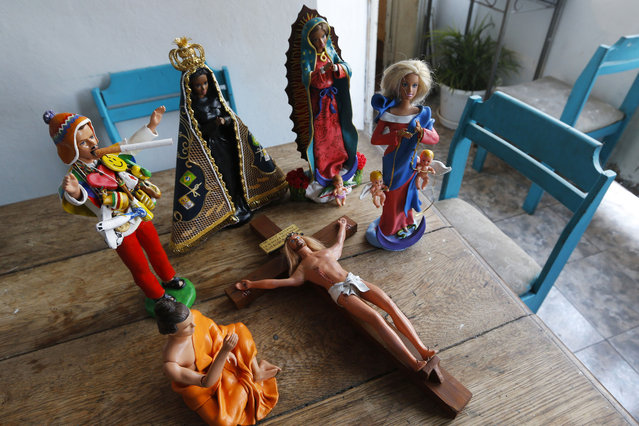 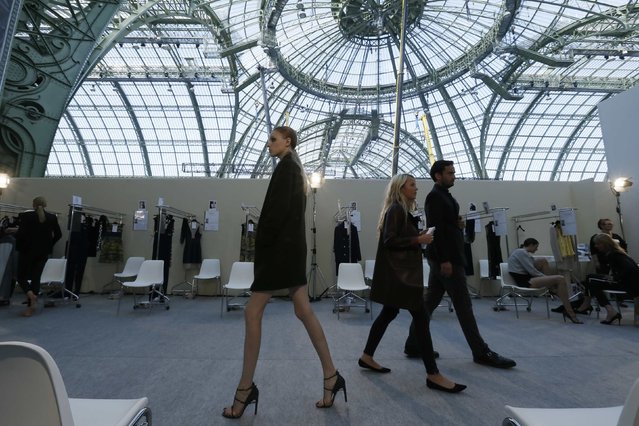 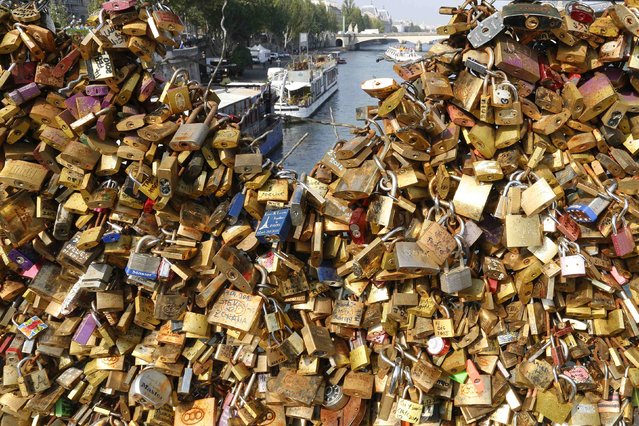 Padlocks clipped by lovers are seen on the fence of the Pont des Arts over the River Seine in Paris September 23, 2014. A city hall campaign to save the bridges of Paris from the weight of hundreds of thousands of brass “love locks” has not checked the ardour of droves of tourists, who continue to view the City of Light as the City of Love. Iron grills lining the bridges have since 2008 been increasingly covered by brass locks purporting to symbolize the unending love of visiting tourists. The city has begun to install thick plastic panels on the Pont des Arts, depriving lovers of the grillwork needed to affix their locks. (Photo by Jacky Naegelen/Reuters) 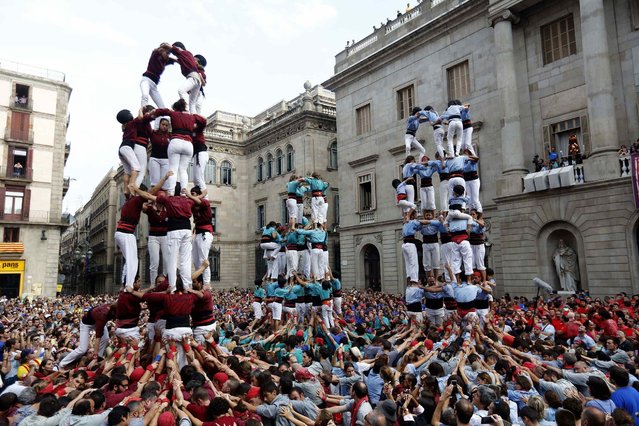 (L-R) “Castellers Colla Jove de Barcelona”, “Castellers Sagrada Familia” and “Castellers de Poble sec” form a human tower during a demonstration at the festival of the patron saint of Barcelona “The Virgin of Mercy” at Sant Jaume square in Barcelona September 24, 2014. (Photo by Gustau Nacarino/Reuters) 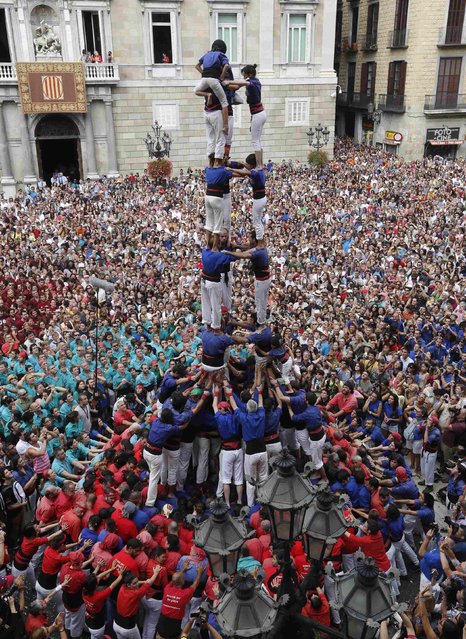