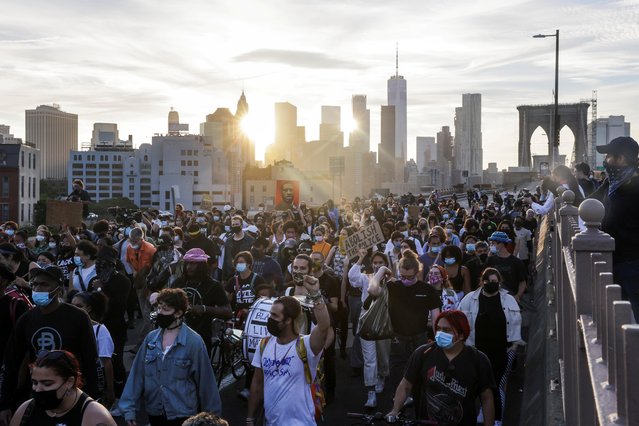 Protesters march on the Brooklyn Bridge during a demonstration on the first anniversary of the death of George Floyd, in New York City, New York, U.S., May 25, 2021. (Photo by Jeenah Moon/Reuters) 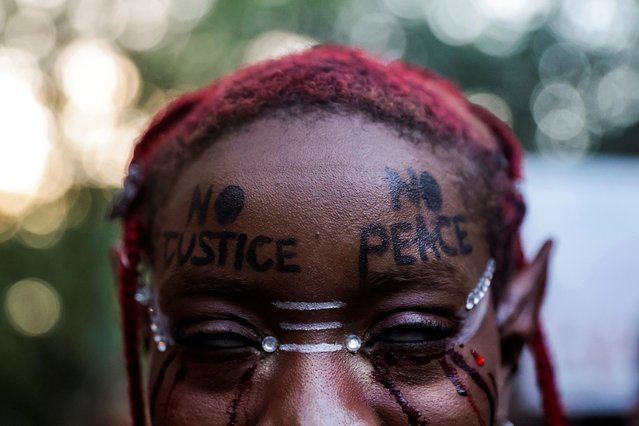 A demonstrator shows a message written on the forehead during a demonstration on the first anniversary of the death of George Floyd, in the Brooklyn borough of New York City, New York, U.S., May 25, 2021. (Photo by Jeenah Moon/Reuters) 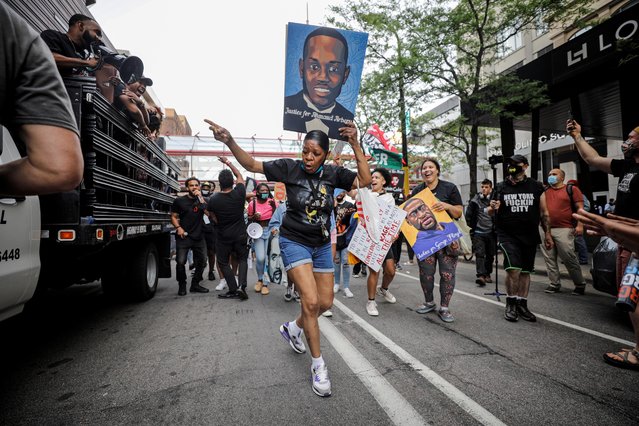 People react as they march during the “One Year, What's Changed?” rally hosted by the George Floyd Memorial Foundation to commemorate the first anniversary of his death, in Minneapolis, Minnesota, U.S. May 23, 2021. (Photo by Nicholas Pfosi/Reuters) 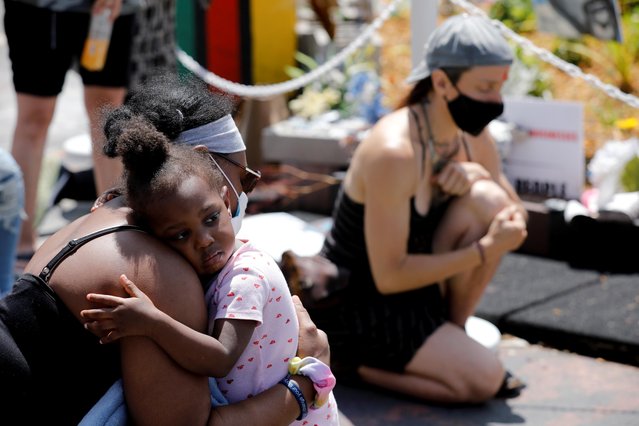 Jacquana Gray embraces her daughter, Olivia, during a moment of silence on the first anniversary of George Floyd's death, at George Floyd Square, in Minneapolis, Minnesota, U.S., May 25, 2021. (Photo by Nicholas Pfosi/Reuters) 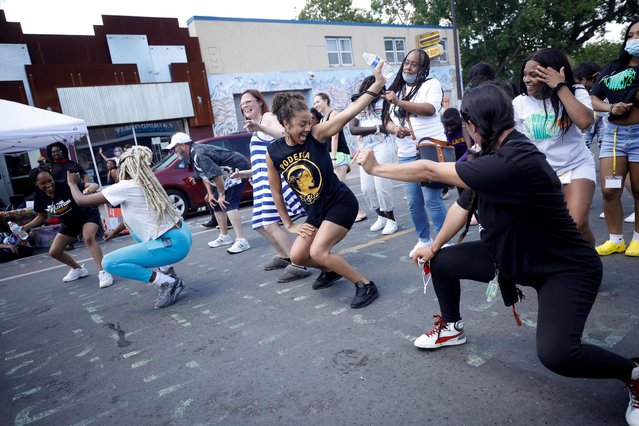 People dance at George Floyd Square on the first anniversary of George Floyd's death, in Minneapolis, Minnesota, U.S., May 25, 2021. (Photo by Nicholas Pfosi/Reuters) 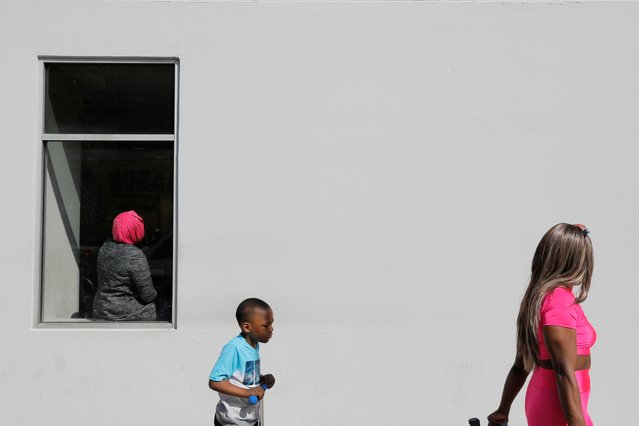 People walk on the street during the outbreak of the coronavirus disease (COVID-19) in Harlem, Manhattan, New York City, New York, U.S., May 25, 2021. (Photo by Andrew Kelly/Reuters) 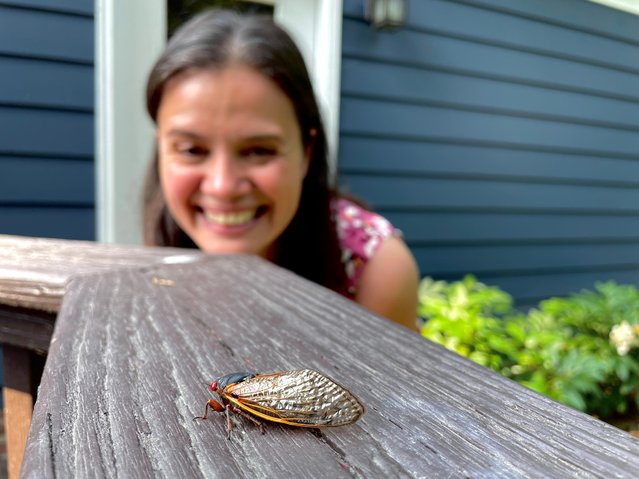 Virginia photographer and cicada enthusiast Oxana Ware poses for a photo in Arlington, Virginia, U.S., May 25, 2021. (Photo by Kevin Fogarty/Reuters) 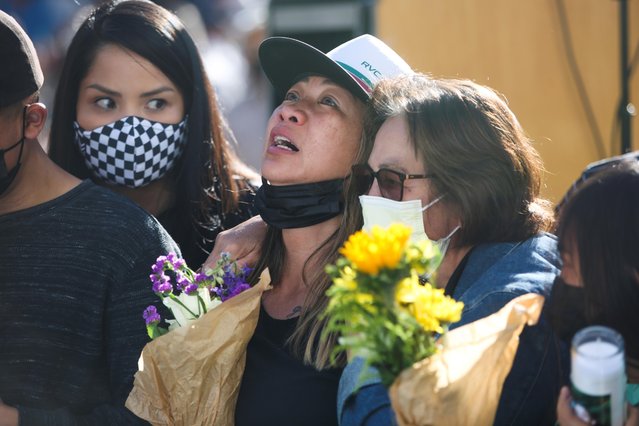 Family members of Paul Delacruz Megia mourn at a vigil for victims of a shooting at a rail yard run by the Santa Clara Valley Transportation Authority in San Jose, California, U.S., May 27, 2021. (Photo by Brittany Hosea-Small/Reuters) 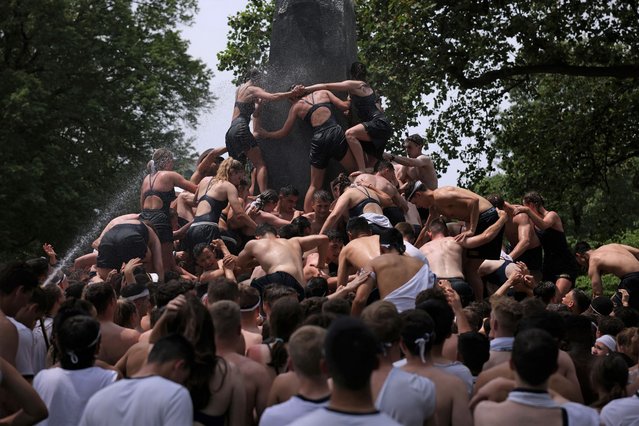 Members of the 2024 midshipmen's class (freshman) from the U.S. Naval Academy work to scale the Herndon Monument and place an upperclassman’s hat on the 21-foot obelisk on on May 22, 2021 in Annapolis, Maryland. The “plebes” worked for three hours and forty one minutes to scale the 21-foot monument and replace a “dixie cup” with the upperclassmen hat, signifying the end of their “plebe” year. (Photo by Anna Moneymaker/Getty Images) 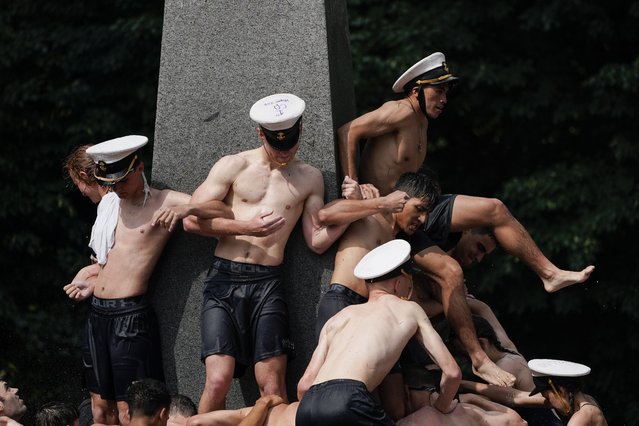 Midshipmen freshmen, known as Plebes, pile on while trying to reach the top of the Herndon Monument during the Herndon Monument Climb at the U.S. Naval Academy, Saturday, May 22, 2021, in Annapolis, Md. Freshmen, known as Plebes, participate in the climb to celebrate finishing their first year at the academy. The climb, which took 3:41 hours to complete, was reached when Midshipman 4th Class Michael Lancaster, 19, center, of Signal Hill, Tenn., of the 14th Company, placed a cover atop the monument. (Photo by Julio Cortez/AP Photo) 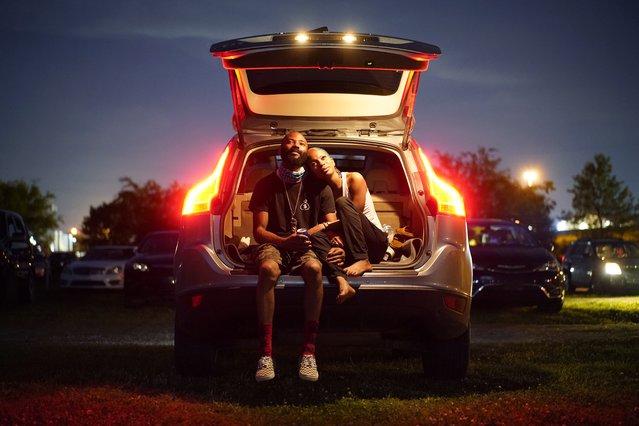 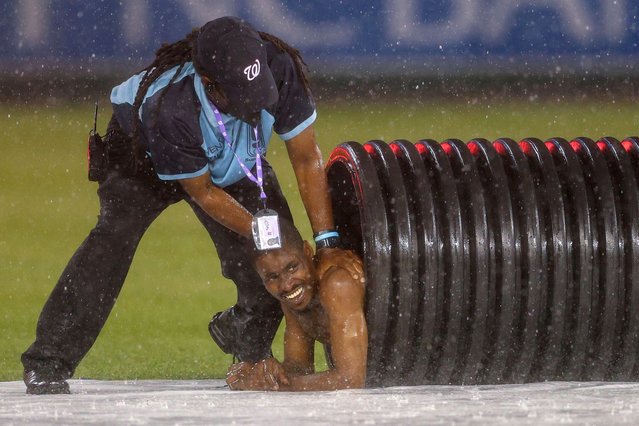 A streaker is pulled from the infield tarp roller by law enforcement and security during a rain delay between the Cincinnati Reds and against the Washington Nationals at Nationals Park on May 26, 2021 in Washington, DC. (Photo by Patrick Smith/Getty Images) 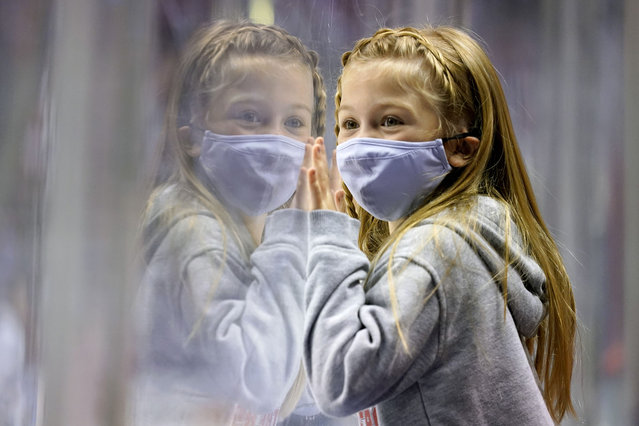 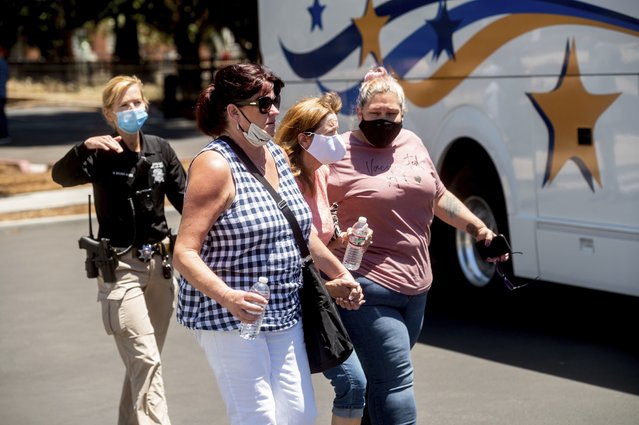 Women leave a gathering area for Santa Clara Valley Transportation Authority (VTA) workers and family members following a shooting at one of the agency's rail yards on Wednesday, May 26, 2021, in San Jose, Calif. A Santa Clara County sheriff's spokesman said a shooting at the rail yard left at least eight people, including the gunman, dead. (Photo by Noah Berger/AP Photo) 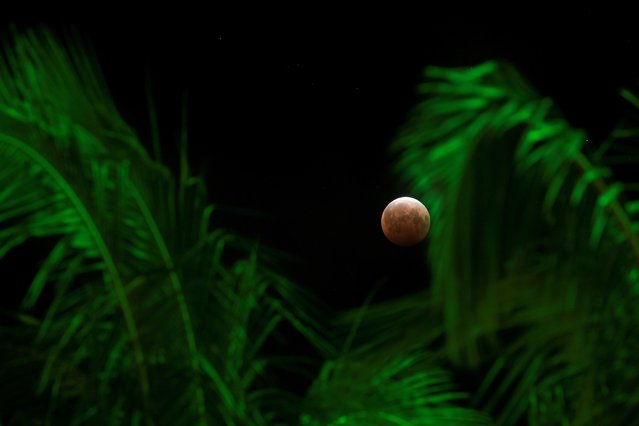 A supermoon, the biggest and brightest full moon of the year, coincides with a total lunar eclipse making the Moon appear red over the skies of Honolulu, Hawaii, U.S. May 26, 2021. (Photo by Marco Garcia/Reuters) 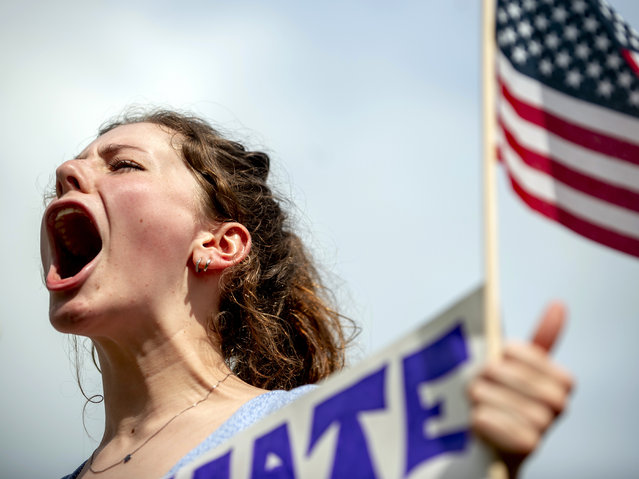 Grand Blanc junior Sarah Hartwell chants “Get her out!” as more than 100 students, retired teachers and other members of the community march on Monday, May 24, 2021 on the sidewalk along Saginaw Street outside of Grand Blanc High School, protesting Amy Facchinello, a school board member accused of believing in the QAnon conspiracy. About 25 counter-protesters showed to argue that Facchinello was duly elected and has her right to free speech. (Photo by Jake May/AP Photo) 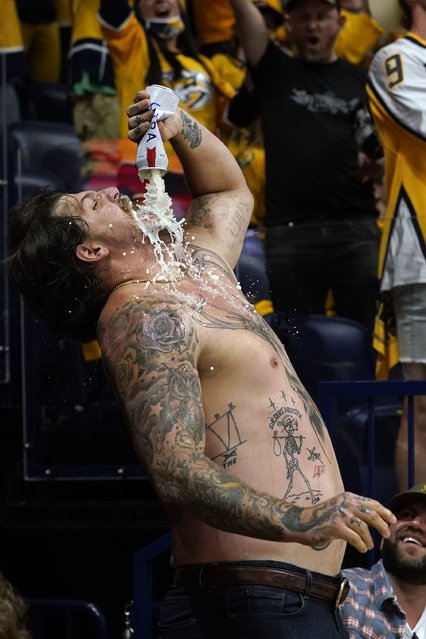 Tennessee Titans NFL football offensive lineman Taylor Lewan celebrates after a goal by the Nashville Predators during the second period in Game 4 of an NHL hockey Stanley Cup first-round playoff series between the Predators and the Carolina Hurricanes Sunday, May 23, 2021, in Nashville, Tenn. (Photo by Mark Humphrey/AP Photo) 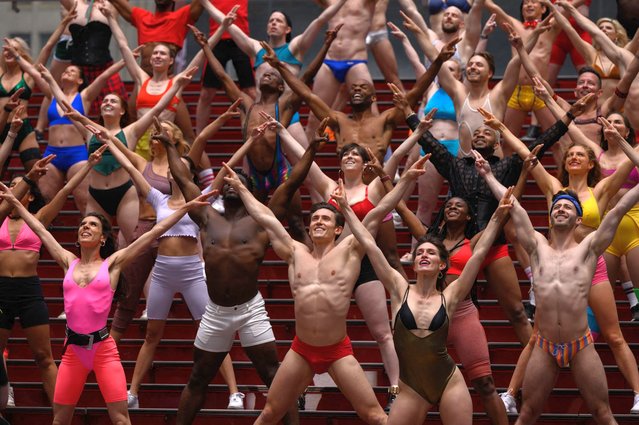 Members and cast of the charitable fundraising show “Broadway Bares” perform during a video shoot entitled “Twerk from Home” in Times Square on May 24, 2021. Broadway Bares was created in 1992 by Tony Award-winning director and choreographer Jerry Mitchell as a way to raise awareness and money for those living with HIV/AIDS. (Photo by Ed Jones/AFP Photo) 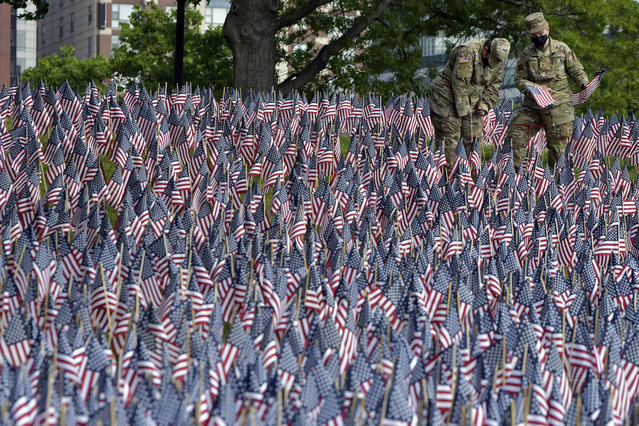 Master Sgt. Mark Radnick, and Capt. Ann Marie Leifer of the Mass. Air National Guard were among those planting American flags on Boston Common Wednesday, May 26, 2021, in Boston. Each year before Memorial Day weekend the Massachusetts Military Heroes Fund places a flag to represent every fallen member of the US military from Massachusetts since the Revolutionary War. (Photo by Josh Reynolds/AP Photo) 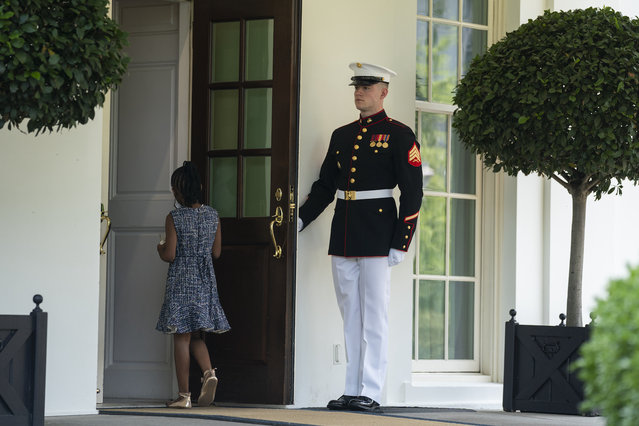