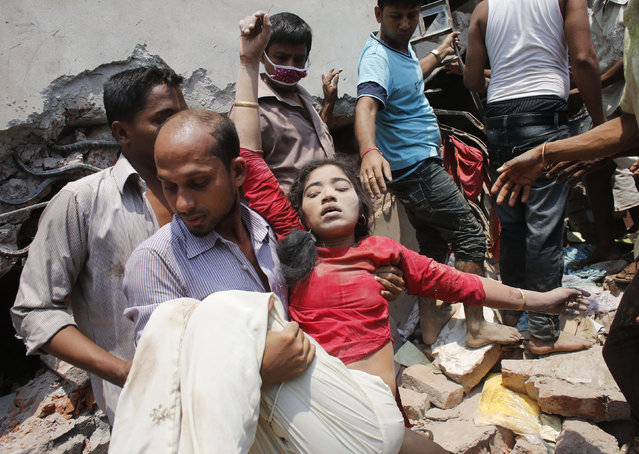 The collapse of Rana Plaza, built on swampy ground outside the capital Dhaka, killed 1,135 workers, many of them making garments for Western retailers. A former chief engineer of the state-run Capital Development Authority said the owner had not received proper consent for the building, and that an extra three stories were added illegally. The disaster ranks amongst the world's worst industrial accidents, and sparked calls for safety improvements in the world's second-largest exporter of ready-made garments. Global fashion retailers say the tragedy prompted them to work together more closely to protect workers and ensure the safety of buildings. Some countries have introduced laws to make the supply chain more transparent. (Photo by Andrew Biraj/Reuters) 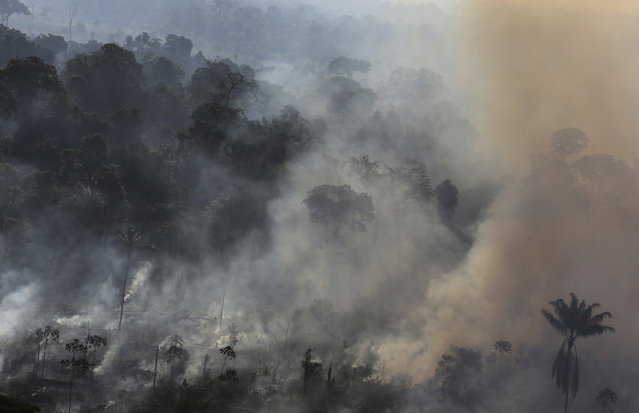 The destruction of Brazil's Amazon forest, the world's largest intact rain forest, increased by 16% in 2015 as the government struggled to enforce legislation and stop illegal clearings in a region the size of Western Europe. The government considers illegal logging the main factor behind the deforestation of the Amazon region, with about 5,000 square km of rain forest destroyed every year. Illegal logging relies on corruption and could not occur without some form of consent from government officials responsible for protecting forests, according to a report by the United Nations and Interpol. The report estimates 15-30% of wood traded globally has been obtained illegally. Deforestation makes up to around 17% of the world's heat-trapping gases, more than the entire transport sector. Besides being a giant carbon sink, the Amazon is a biodiversity sanctuary, holding myriad species yet to be studied. (Photo by Nacho Doce/Reuters) 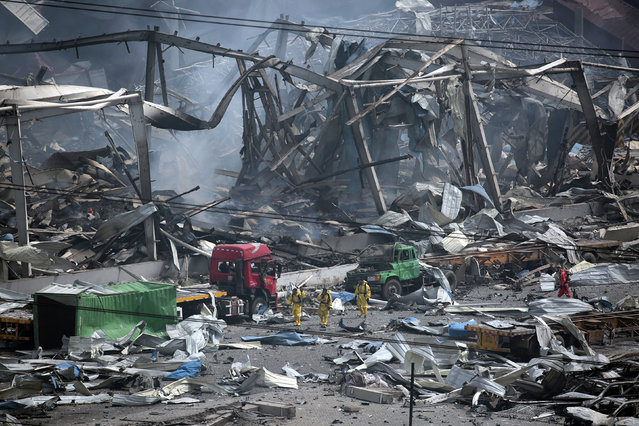 Chemical blasts in the Chinese port city of Tianjin killed 165 people in 2015. The government put the losses in the 10th busiest port in the world at more than $1 billion. An official report on the disaster blamed the ignition of hazardous materials which had been improperly or illegally stored on site. Company executives also said they used their connections to get fire safety and environmental approvals through unofficial channels. Anger over safety standards is growing in China, after three decades of swift economic growth marred by incidents from mining disasters to factory fires. President Xi Jinping has vowed that authorities will learn lessons. (Photo by Jason Lee/Reuters) 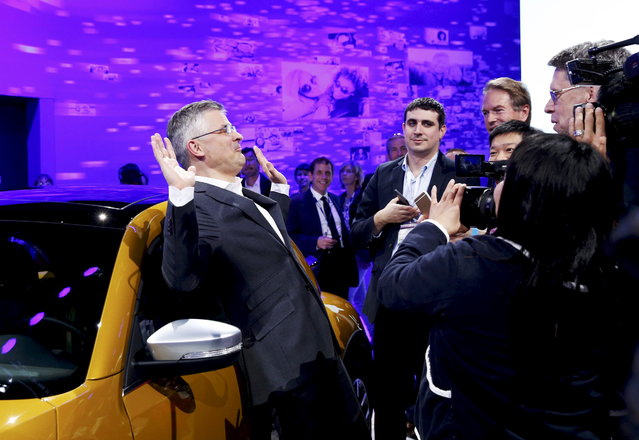 Volkswagen admitted in 2015 that about 11 million of its cars worldwide were fitted with software to cheat diesel emissions tests that are designed to limit car fumes blamed for respiratory diseases and global pollution. (Photo by Lucy Nicholson/Reuters) 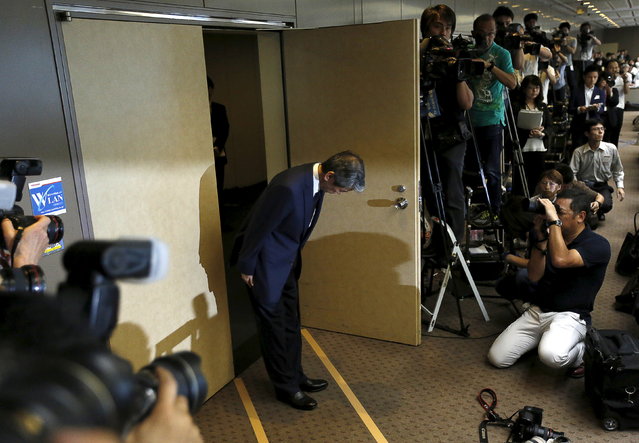 In 2015, Toshiba was found to have inflated its earnings by around $1.2 billion over several years. It was Japan's biggest accounting scandal since Olympus Corp in 2011. (Photo by Toru Hanai/Reuters) 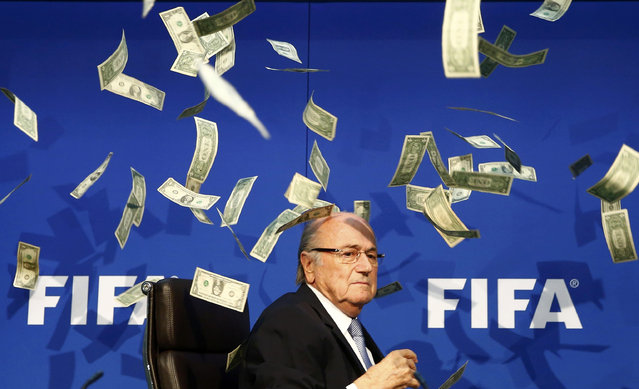 FIFA was thrown into crisis by U.S. investigations into alleged widespread financial wrongdoing stretching back more than two decades. Sepp Blatter, who had led soccer's world governing body since 1998, was banned from soccer activities for ethics violations in December. (Photo by Arnd Wiegmann/Reuters) 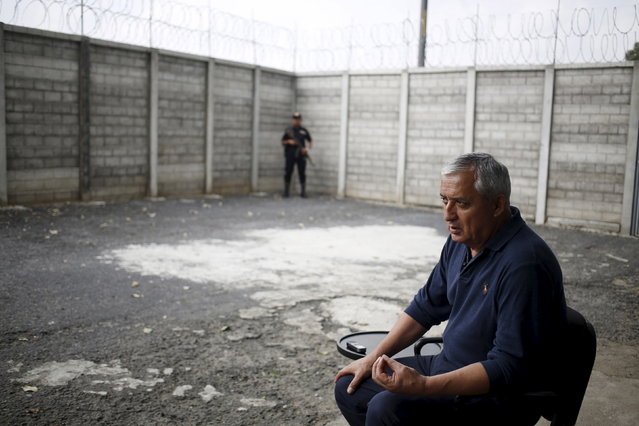 Jimmy Morales, a former TV comedian, was carried to the presidency of Guatemala in 2015 on a wave of public anger over political corruption uncovered by the International Commission against Impunity in Guatemala. Set up to deal with paramilitary gangs in 2007, the CICIG went from being an obscure, forgotten office of the United Nations to a force that ousted President Otto Perez (seen here during an interview with Reuters at the Matamoros Army Base while awaiting trial in Guatemala City). Information gleaned from the cell phone of a Chinese businessman caught up in a prior customs fraud was used to untangle a scheme where importers paid bribes to avoid customs duties. According to the CICIG, the scam led all the way to Perez and his vice president, Roxana Baldetti. In September 2015, Perez was ordered to stand trial for corruption. (Photo by Jorge Dan Lopez/Reuters) 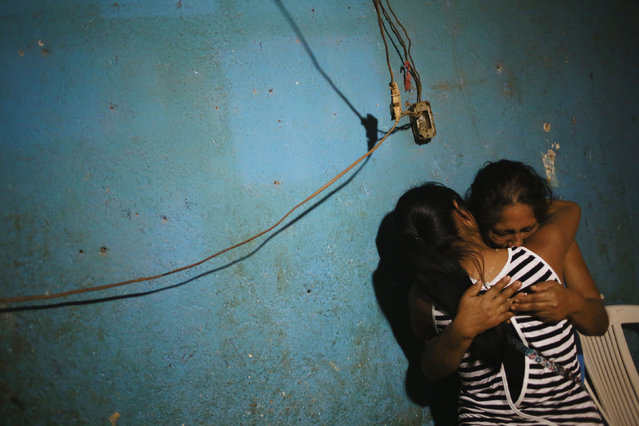 Forty-three student teachers went missing from the southwestern Mexican city of Iguala in 2014 after clashing with local police. Their abduction caused an international uproar over human rights abuses in Mexico. The government originally said the students were detained by corrupt local police, handed over to a drug gang, and incinerated in a rubbish dump before their ashes were thrown into a river. But a panel of international experts rejected the notion that all the students' bodies were burned at the dump, saying the investigation was full of holes. So far, the remains of only one of the missing students has been positively identified and the whereabouts of the rest remain a mystery. (Photo by Jorge Dan Lopez/Reuters) 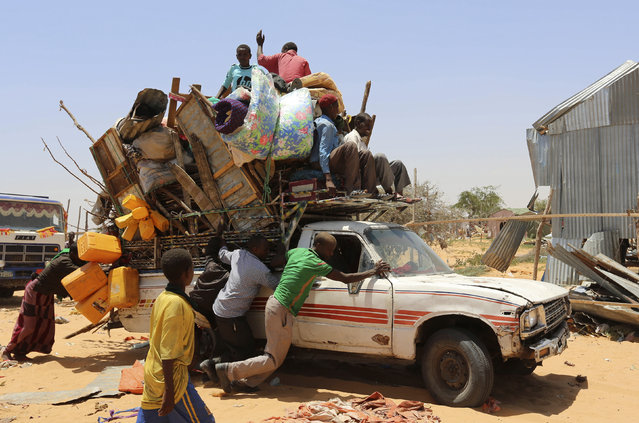 More than 6 billion people live in countries where serious levels of public sector corruption are fueling inequality and exploitation, according to Transparency International's 2015 index of perceived public sector corruption. The group's annual report measures perceptions of corruption due to the secrecy surrounding most corrupt dealings. Two thirds of the 168 countries assessed were identified as having a serious corruption problem. Somalia, which has been mired in conflict since civil war broke out in 1991, ranks bottom of the list. (Photo by Feisal Omar/Reuters) 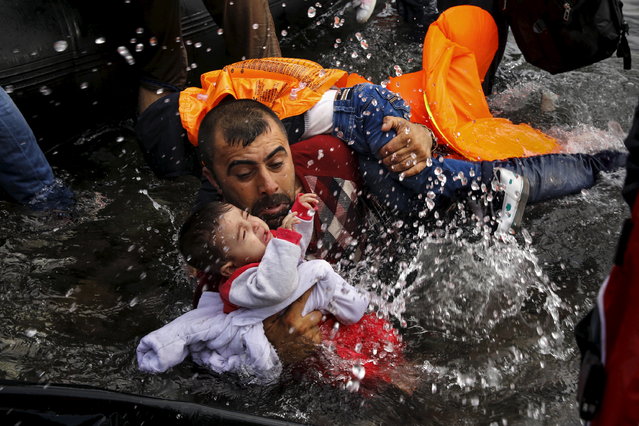 Last year a record 1 million people made the Mediterranean Sea crossing, five times more than in 2014. During the year, the International Organization for Migration estimates that 805 died in the eastern Mediterranean and 2,892 died in the central Mediterranean. Human brokers play the central role in many migrants' journeys. Like the thousands of Central Americans who pour into the United States, or the Rohingya Burmese who flood into Thailand and Malaysia, illegal travelers worldwide depend on an industry run by networks of individual criminal entrepreneurs. Syrians desperate to leave their homeland after years of civil war are forced to pay hefty bribes at armed checkpoints proliferating along Syria's borders, or to smugglers, according to the United Nations. Europol, Europe's police agency, says people-smuggling may have generated between $3 billion and $6 billion last year. Most of the money for passage is raised and transferred by migrants' and refugees' relatives around the world. (Photo by Yannis Behrakis/Reuters) 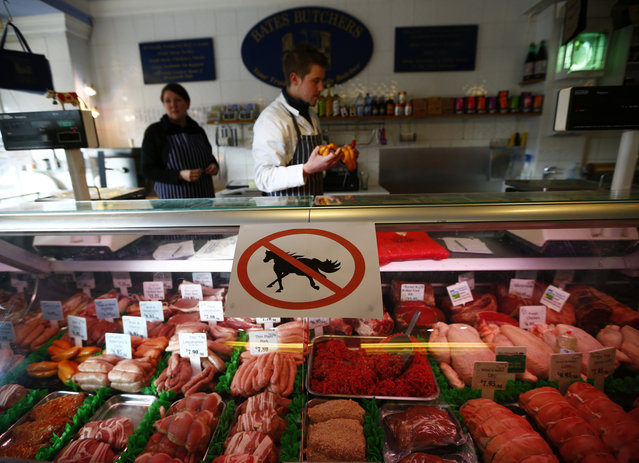 The horsemeat scandal broke in 2013 after genetic tests found traces of horsemeat in burgers sold at British and Irish supermarkets. Adulterated beef products were discovered across Europe, with suppliers in France and the Netherlands also found to have mislabeled horsemeat. France found more cases of illegal horsemeat in beef products than any other country, results of official DNA tests showed, with more than 1 in every 8 samples testing positive. Unidentified criminal gangs are believed to have made huge profits by substituting millions of tons of cheap horsemeat for more expensive beef. The scandal raised major concerns over how we monitor supply chains and the resources available to investigate food crime. (Photo by Darren Staples/Reuters) 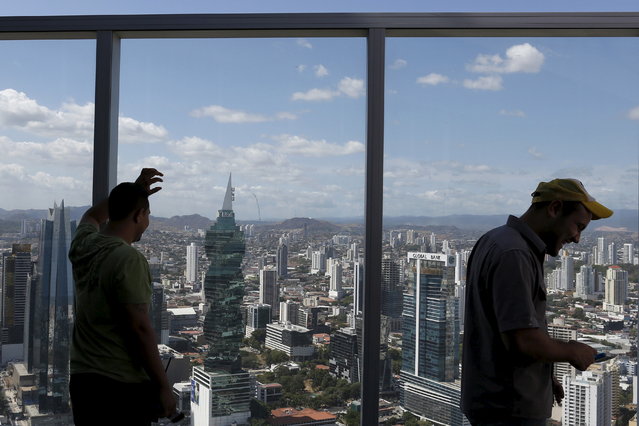 More than 11.5 million documents leaked from Panamanian law firm Mossack Fonseca cast light on the finances of an array of politicians and public figures and the institutions they use. Several governments launched investigations after the leak of documents from the firm, which specializes in setting up offshore companies. The papers have fueled public anger that the rich and powerful are able to avoid taxes while many people suffer austerity and hardship. The leaks have revealed financial arrangements of prominent figures, including friends of Russian President Vladimir Putin, relatives of the prime ministers of Britain and Pakistan and of China's President Xi Jinping, and the president of Ukraine. (Photo by Carlos Jasso/Reuters) 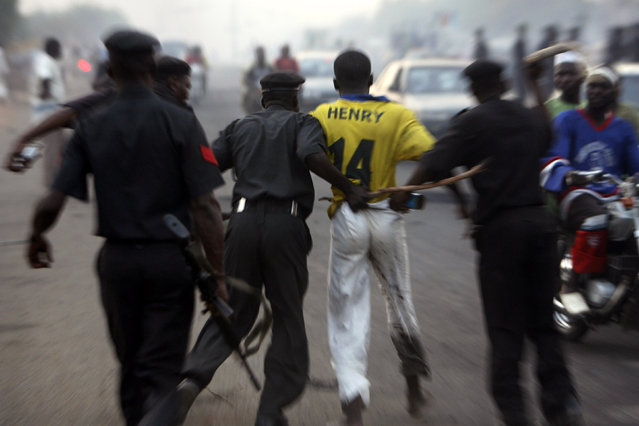 The 2007 presidential vote in Kenya, when incumbent President Mwai Kibaki was declared victor, erupted into bloodletting that drove 350,000 people from their homes. It was disputed by opponents. More than 1,200 people were slaughtered, many butchered by machete, burnt alive or shot with bows and arrows as the country's biggest tribes turned on one another. Previous votes in Kenya have also been dogged by “ghost” voters, stuffed ballot boxes and rigging at the final tally. As well as tribal friction, corruption is frequently a factor in conflict – although this has decreased since 2010, according to a Transparency International survey. In 2010, 45% of Kenyans reported paying a bribe, the survey showed. (Photo by Radu Sigheti/Reuters) 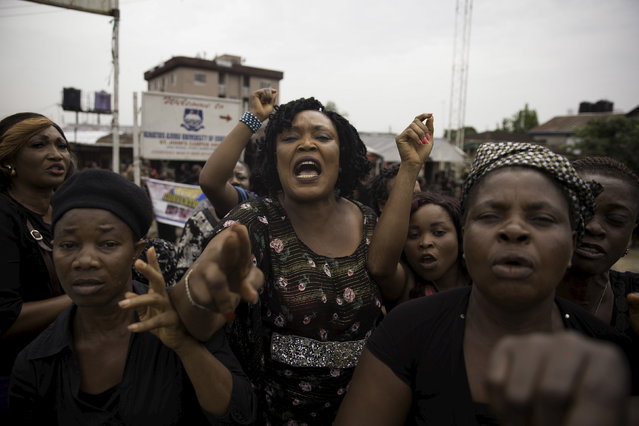 Nigerian President Muhammadu Buhari was elected in 2015 after campaigning on a promise to clamp down on the endemic corruption that has left many in Africa's biggest economy mired in poverty despite its enormous energy wealth. True to his election promises, Buhari has gone all out on corruption, alleging mind-boggling sums plundered from state coffers and giving investigators license to pull in big hitters once thought untouchable. The People's Democratic Party, ousted after dominating politics since military rule ended in 1999, has accused its successor of conducting a witch-hunt. Buhari has urged the World Bank to assist in the repatriation of $320 million stolen by former military leader Sani Abacha, which is being held by authorities in Switzerland, his office said in a statement in April. (Photo by Afolabi Sotunde/Reuters)
Edit Del
13 May 2016 12:10:00, post received 0 comments
Publication archive:
←   →
Popular tags:
All tags
Last searches: