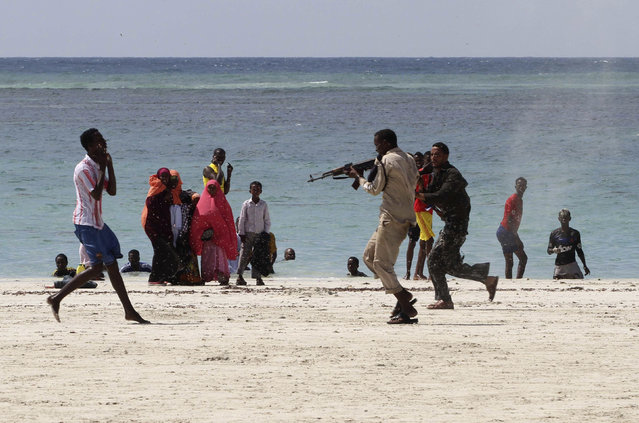 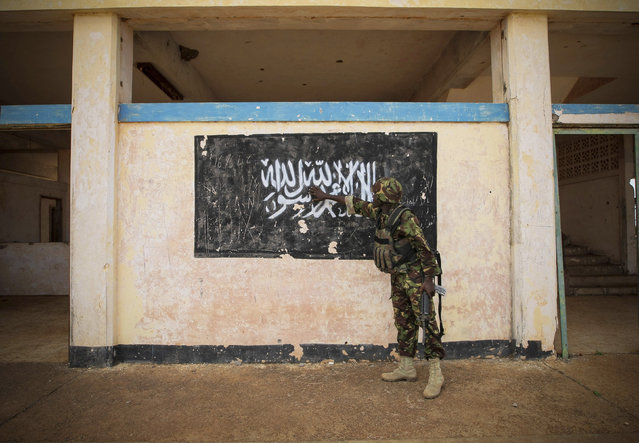 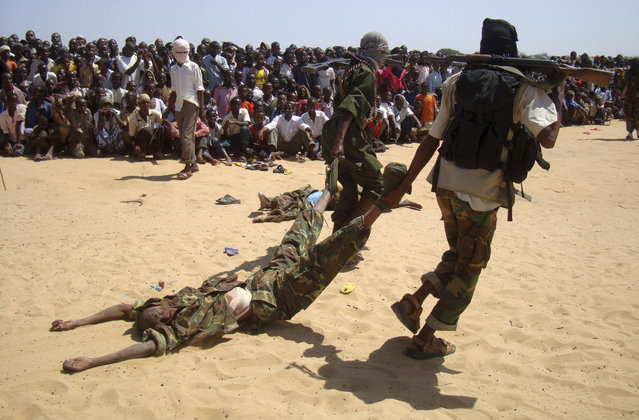 An African Union force, known as AMISOM, and Somali soldiers have recaptured swathes of territory since launching an offensive last year which the AU envoy said had driven al Shabaab from “85 percent” of areas it had controlled. Here: members of the al Qaeda-linked insurgents al Shabaab display the body of one of the seven suspected Burundian peacekeepers from the African Union Mission to Somalia (AMISOM) who were killed during clashes in Somalia's capital Mogadishu February 24, 2011. (Photo by Feisal Omar/Reuters) 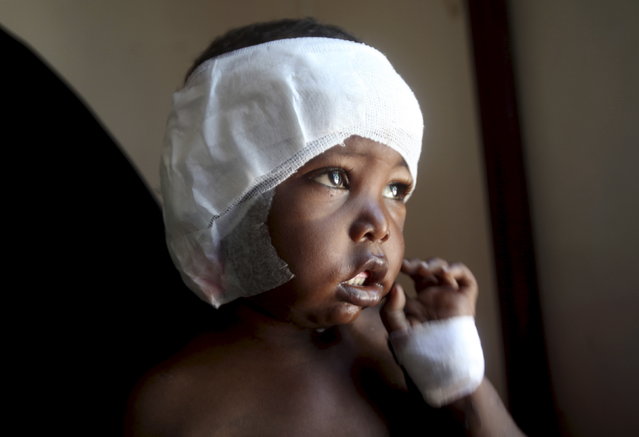 Somalia is trying to rebuild after two decades of civil war and lawlessness, but persistent attacks in the capital have complicated that effort. The fragile government is being backed by international aid aimed at preventing it from becoming a haven for al Qaeda-style militants in East Africa. Here: a boy injured during an attack by the Islamist group al Shabaab at Maka Al-Mukarama hotel recuperates at a hospital in Mogadishu, March 28, 2015. (Photo by Ismail Taxta/Reuters) 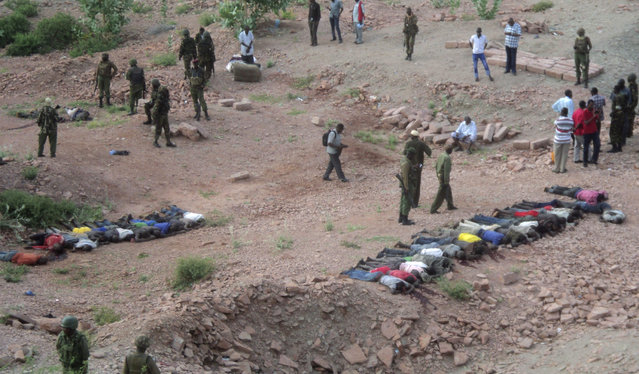 Al Shabaab, which seeks to impose its own harsh version of sharia law, has separated Muslims from Christians in some of its previous raids in Kenya, notably late last year in attacks on a bus and at a quarry. Here: people stand near bodies lined up on the ground at a quarry site where attackers killed at least 36 workers in a village in Korome, outside the border town of Mandera December 2, 2014. (Photo by Reuters/Stringer) 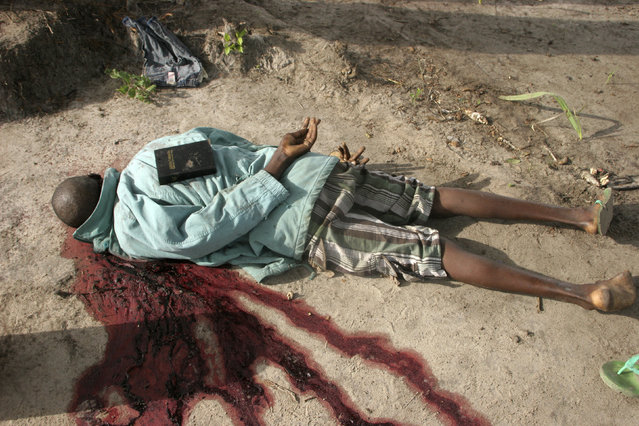 Al Shabaab's repeated raids, together with attacks on churches by home-grown Islamist groups, have strained the historically cordial relations between Kenya's Muslim and Christian communities. Here: a bible placed by gunmen is seen on the back of the slain body of a man after an attack in Hindi village, near Kenya's coastal town of Lamu, July 6, 2014. (Photo by Abdalla Barghash/Reuters) 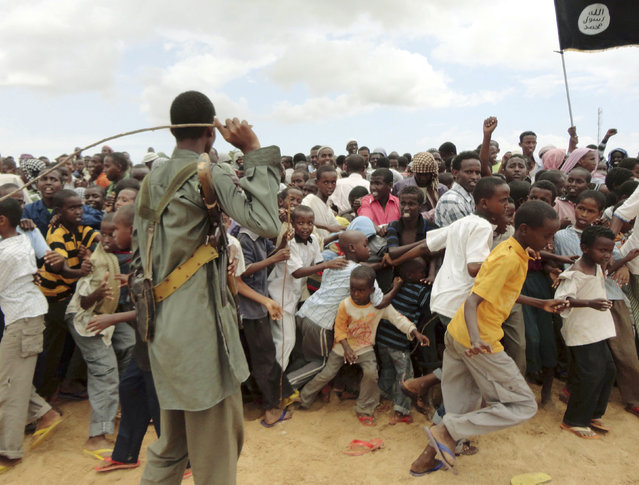 Having killed more than 200 people in Kenya over the past two years, Al Shabaab has also brought the country's tourism industry to its knees. Here: a member of al Shabaab controls residents as they participate in a demonstration against Kenyans' incursion inside Somalia in Elasha, outside Mogadishu, October 27, 2011. (Photo by Ismail Taxta/Reuters) 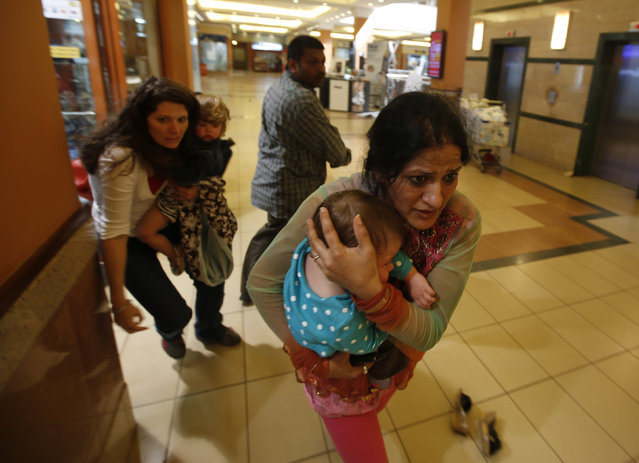 Al Shabaab has links to al Qaeda and a record of raids on Kenyan soil in retaliation for Nairobi sending troops to fight it in its home state of Somalia. Attacks include the shooting spree in Nairobi's Westgate shopping center in 2013 that killed at least 67 people. Here: women carrying children run for safety as armed police hunt gunmen who went on a shooting spree in Westgate shopping center in Nairobi September 21, 2013. (Photo by Goran Tomasevic/Reuters) 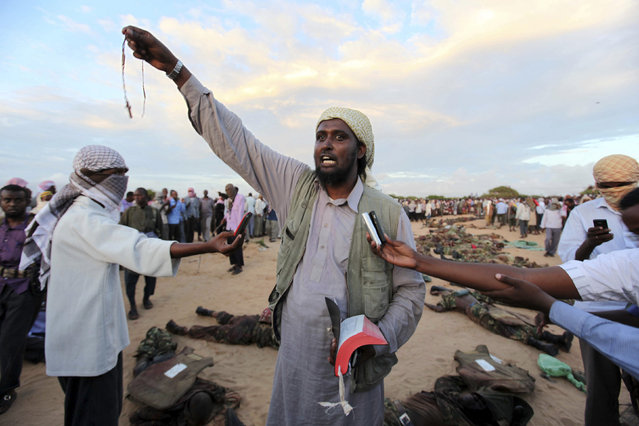 Al Shabaab says the offensive has not diminished its ability to strike across the southern central region to cut off supply routes. Here: Al Shabaab spokesman addresses the media next to what they say are the bodies of 76 Burundian peacekeepers from the African Union Mission to Somalia killed during heavy fighting in Daynile district, south of Mogadishu October 20, 2011. (Photo by Feisal Omar/Reuters) 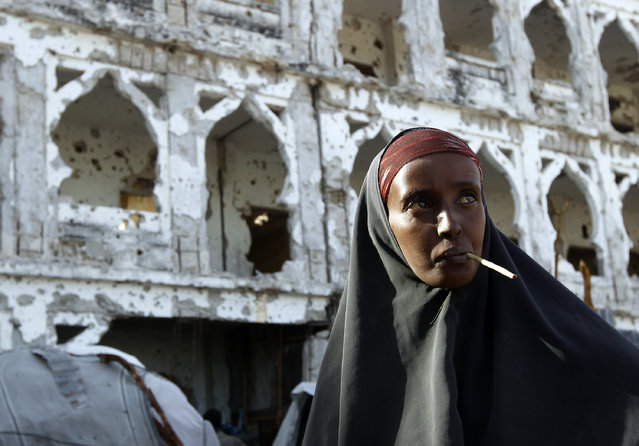 Somali's decades of political upheaval and crippling poverty has given rise to various radical Islamist groups. Here: a woman stands in front of a building destroyed during a fight between al Shabaab militants against African Union and Somali Government forces in Mogadishu June 26, 2012. (Photo by Goran Tomasevic/Reuters) 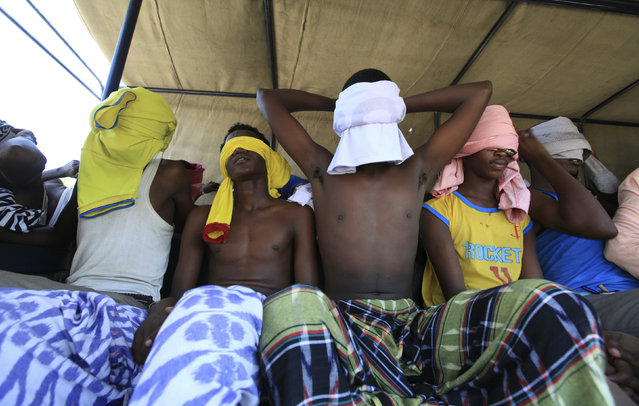 Western governments and neighboring countries want to neutralize al Shabaab, a group that they say has exploited Somalia's chaos to attract Jihadists and train them to fight. Here: suspected al Shabaab members sit inside a Somali government police forces truck after they were arrested during an operation in the Madina district of Somalia's capital Mogadishu January 15, 2013. (Photo by Feisal Omar/Reuters) 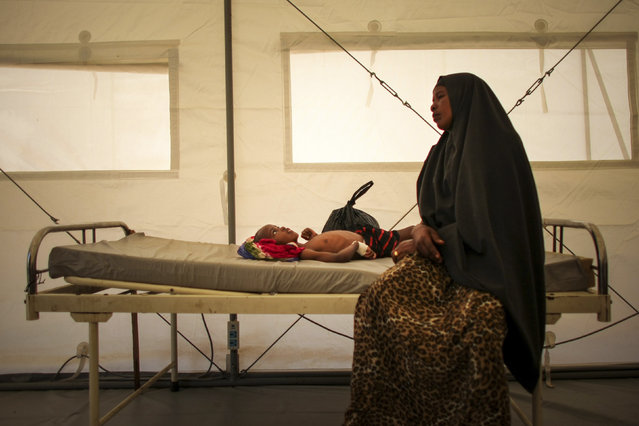 According to human rights organizations, al Shabaab has committed targeted killings, beheadings and executions, with civilians continuing to suffer human rights abuses. Here: a Somali woman sits on a bed where her son has been admitted to a tented-hospital ward at a free Outpatients Department (OPD) medical clinic at the headquarters of the Burundi Contingent serving with the African Union Mission in Somalia (AMISOM) at the former National University in the Somali capital Mogadishu, in this handout photo taken March 4, 2013 by the African Union-United Nations Information Support Team (AU-UN IST). (Photo by Stuart Price/Reuters) 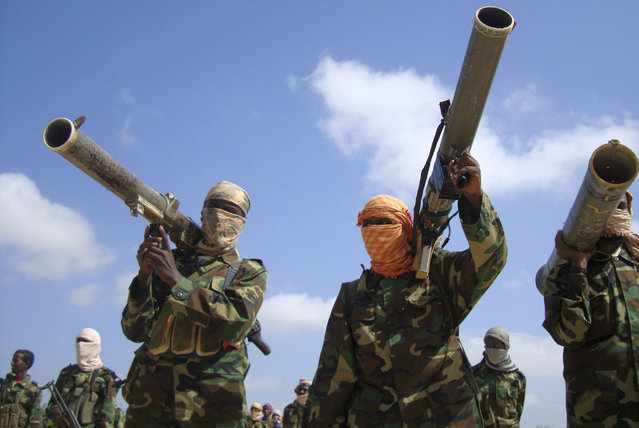 According to the Council on Foreign Relations, al Shabaab is funded through a combination of state sponsors, charities, piracy, kidnapping and the extortion of local businesses, chiefly charcoal and sugar. Here: a captured fighter from the Islamist group al Shabaab is seen at the headquarters of the African Union Mission in Somalia (AMISOM) in Mogadishu September 21, 2010. (Photo by Reuters/African Union Mission in Somalia) 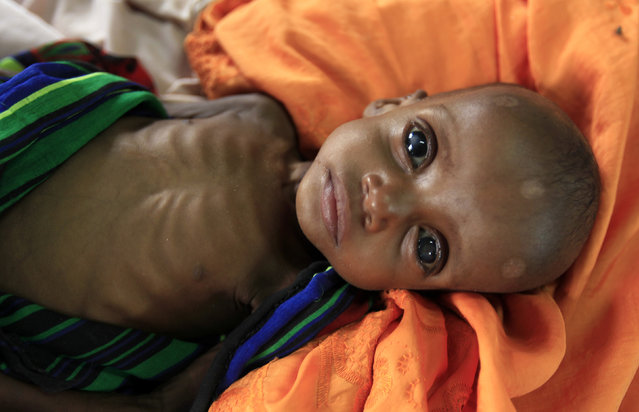 Aid agencies paid al Shabaab for permission to deliver aid in areas controlled by the Islamist group during a famine in 2011. Al-Shabaab imposed registration and security fees ranging from $500 to $10,000 on humanitarian agencies delivering aid in the areas it controlled. Here: an unidentified severely malnourished Somali refugee child rests inside a ward at the Medecins Sans Frontieres (MSF) hospital at the Dagahale refugee camp in Dadaab, near the Kenya-Somalia border, July 28, 2011. (Photo by Thomas Mukoya/Reuters) 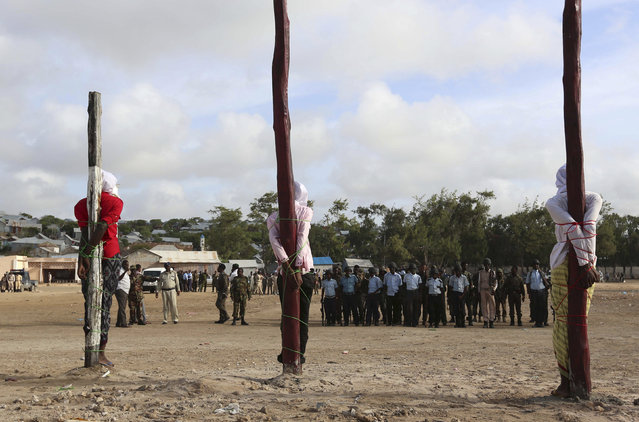 Following the killing of leader Ahmed Abdi Godane by a U.S. air strike in 2008, al Shabaab reaffirmed its affiliation to al Qaeda, and named its new leader as Sheikh Ahmad Umar Abu Ubaidah, warning its enemies to “expect only that which will cause you great distress”. Here: three members of al Shabaab found guilty by a Somali military court of killing civilians and masterminding a recent attack on the Presidential Palace stand tied to poles shortly before they were executed by a firing squad in capital Mogadishu August 3, 2014. (Photo by Feisal Omar/Reuters) 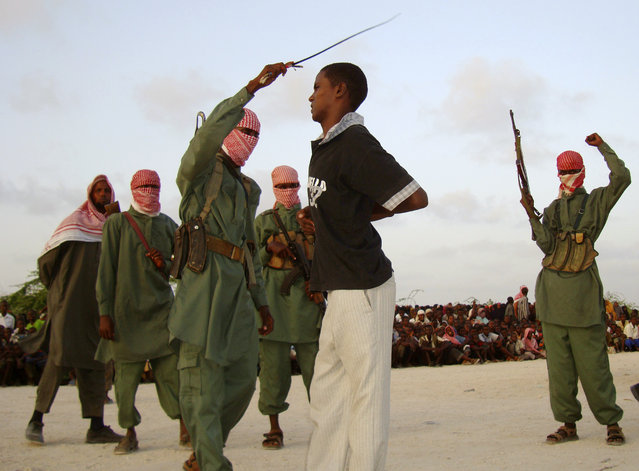 The toppling by warlords of military dictator Mohamed Siad Barre in 1991 plunged the Horn of Africa nation into anarchy, allowing al Shabaab, which means “Youth” or “Boys” in Arabic, to seize control of large areas of south and central Somalia. Here: an Islamist fighter from al Shabaab Mujaahidin lashes one of the four youths who confessed to raping a woman, on the outskirts of Mogadishu, March 9, 2009. (Photo by Feisal Omar/Reuters) 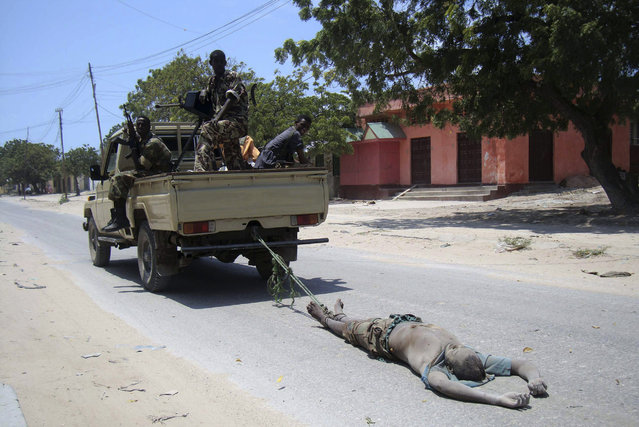