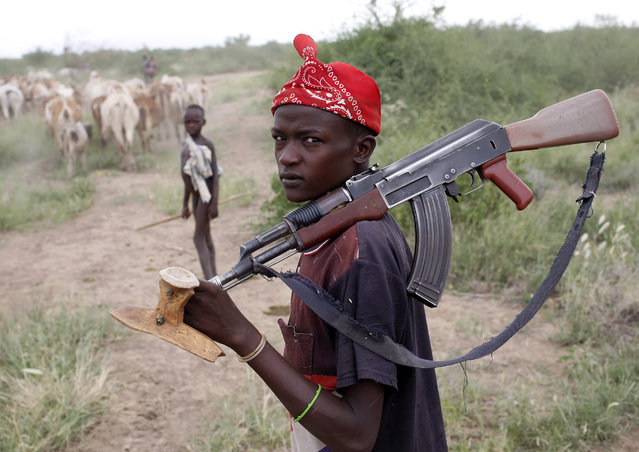 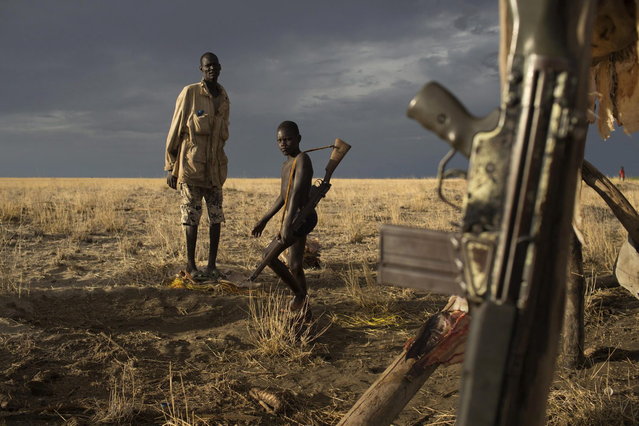 A Turkana man and a boy carrying a gun look on as a G3 battle rifle hangs from a structure used to dry fish at a fishing camp on the shores of Lake Turkana, some kilometres from Todonyang near the Kenya-Ethiopia border in northwestern Kenya October 12, 2013The Turkana are traditionally nomadic pastoralists, but they have seen the pasture that they need to feed their herds suffer from recurring droughts and many have turned to fishing. However, Lake Turkana is overfished, and scarcity of food and pastureland is fuelling long-standing conflict with Ethiopian indigenous Dhaasanac, who have seen grazing grounds squeezed by large-scale government agricultural schemes in southern Ethiopia. The Dhaasanac now venture ever deeper into Kenyan territory in search of fish and grass, clashing with neighbours. Fighting between the communities has a long history, but the conflict has become ever more fatal as automatic weapons from other regional conflicts seep into the area. While the Turkana region is short of basics like grass and ground-water, it contains other resources including oil reserves and massive, newly discovered underground aquifers. (Photo by Siegfried Modola/Reuters)
Details
05 Dec 2013 12:08:00,post received 0 comments
Fact Turkana People, Part 2 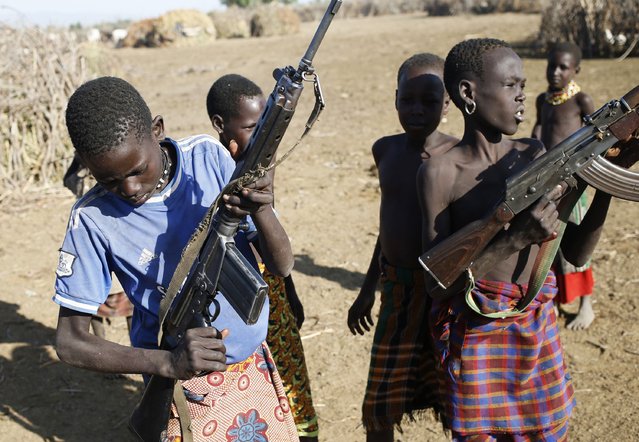 Turkana boys play with rifles in a village inside the Turkana region of the Ilemi Triangle, northwest Kenya December 21, 2014. The Ilemi Triangle is a disputed region in East Africa, claimed by South Sudan and Kenya, bordering also Ethiopia. The dispute arose from unclear wording of a 1914 treaty which tried to allow free movement of the Turkana people, nomadic herders who had traditionally grazed the area. (Photo by Goran Tomasevic/Reuters)
Details
24 Dec 2014 13:41:00,post received 0 comments
Touching Girls with Guns

“Weapons Instructor”, 2012. It’s a well known fact that the IDF trains some of the best soldiers in the world, but at the source of every good soldier lies an exceptional instructor – and that’s where Cpl. Daniella Stepanoe steps in. She travels from base to base training everyone from paratroopers to elite special forces units in the use of their weapons. (Photo by Israel Defense Forces)
Details
31 Jul 2012 09:05:00,post received 0 comments
Fact Ball Girls 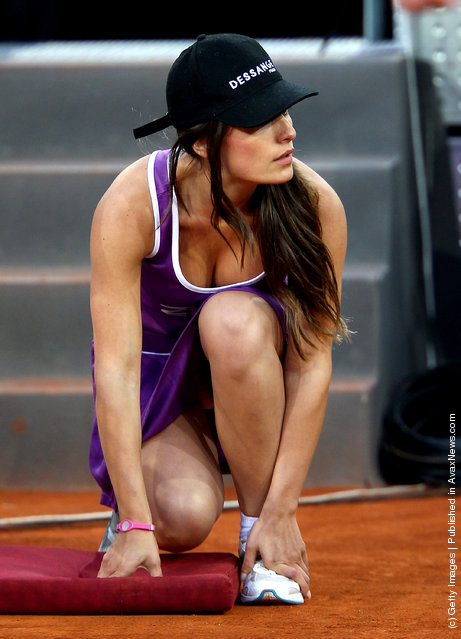