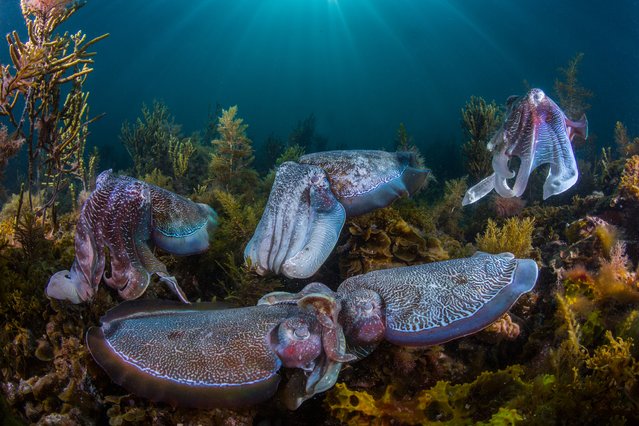 Collective courtship by Scott Portelli, Australia. Thousands of giant cuttlefish gather each winter in the shallow waters of South Australia’s Upper Spencer Gulf for their once-in-a-lifetime spawning. Males compete for territories that have the best crevices for egg‐laying and then attract females with mesmerising displays of changing skin colour, texture and pattern. Rivalry among the world’s largest cuttlefish – up to a metre (3.3ft) long – is fierce, as males outnumber females by up to 11 to one. (Photo by Scott Portelli/2016 Wildlife Photographer of the Year) 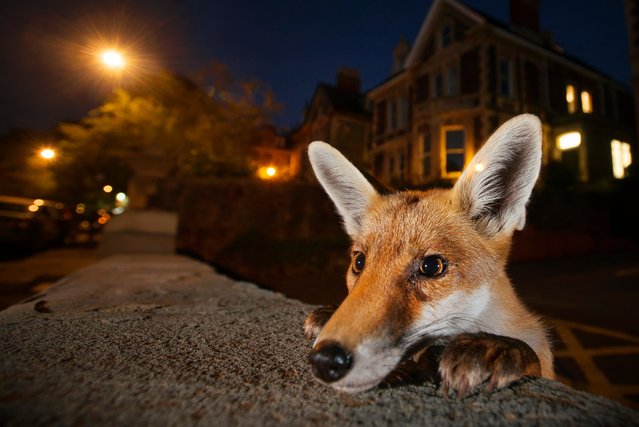 Nosy neighbour by Sam Hobson, UK. Sam knew exactly who to expect when he set his camera on the wall one summer’s evening in a suburban street in Bristol, the UK’s famous fox city. He wanted to capture the inquisitive nature of the urban red fox in a way that would pique the curiosity of its human neighbours about the wildlife around them. (Photo by Sam Hobson/2016 Wildlife Photographer of the Year) 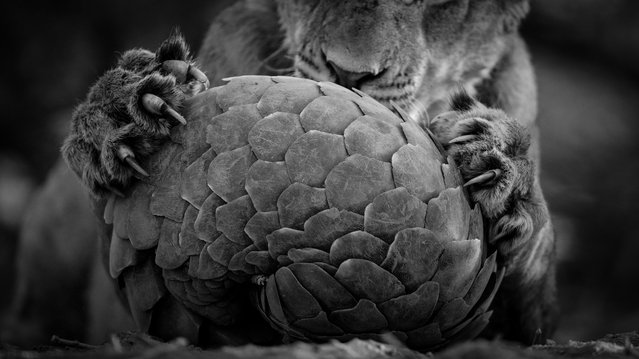 Playing pangolin by Lance van de Vyver, New Zealand/South Africa. Lance had tracked the pride for several hours before they stopped to rest by a waterhole, but their attention was not on drinking. The lions in South Africa’s Tswalu Kalahari Private Game reserve had discovered a Temminck’s ground pangolin. This nocturnal, ant-eating mammal is armour-plated with scales made of fused hair, and it curls up into an almost impregnable ball when threatened. (Photo by Lance van de Vyver/2016 Wildlife Photographer of the Year) 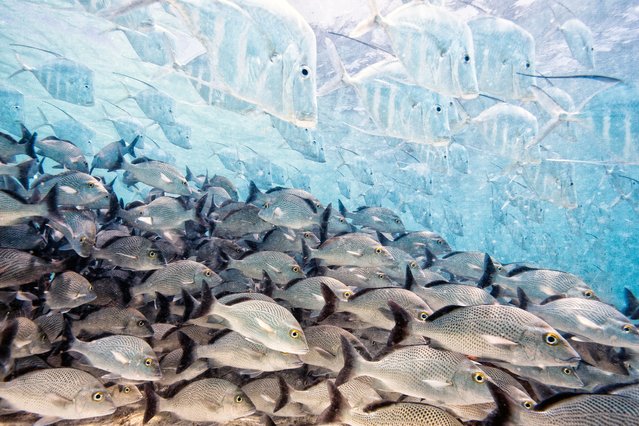 The disappearing fish by Iago Leonardo, Spain. In the open ocean, there’s nowhere to hide, but the lookdown fish – a name it probably gets from the steep profile of its head, with mouth set low and large eyes high – is a master of camouflage. Recent research suggests that it uses special platelets in its skin cells to reflect polarised light (light moving in a single plane), making itself almost invisible to predators and potential prey. The platelets scatter polarised light depending on the angle of the sun and the fish, doing a better job than simply reflecting it like a mirror. (Photo by Iago Leonardo/2016 Wildlife Photographer of the Year) 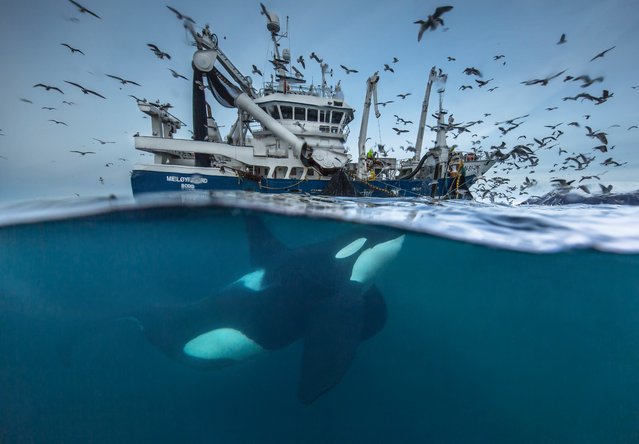 Splitting the catch by Audun Rikardsen, Norway. Sometimes it’s the fishing boats that look for the killer whales and humpbacks, hoping to locate the shoals of herring that migrate to these Arctic Norwegian waters. But in recent winters, the whales have also started to follow the boats. Here a large male killer whale feeds on herring that have been squeezed out of the boat’s closing fishing net. He has learnt the sound that this type of boat makes when it retrieves its gear and homed in on it. The relationship would seem to be a win-win one, but not always. (Photo by Audun Rikardsen/2016 Wildlife Photographer of the Year) 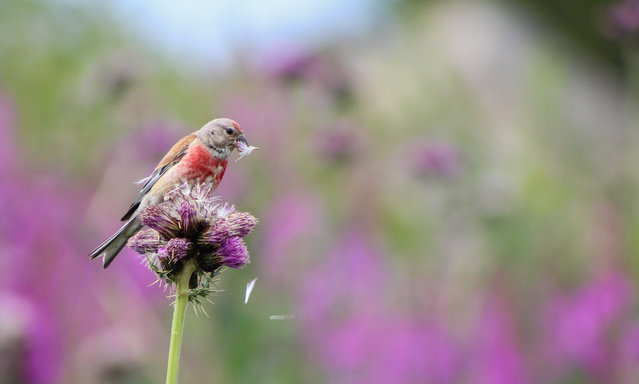 Thistle-plucker by Isaac Aylward, UK. Isaac composed this alpine-meadow tableau with the sea of soft purple knapweed behind, accentuating the clashing red of the linnet’s plumage. He was determined to keep pace with the linnet that he spotted while hiking in Bulgaria’s Rila Mountains, finally catching up with the tiny bird when it settled to feed on a thistle flowerhead. From the florets that were ripening, it pulled out the little seed parachutes one by one, deftly nipped off the seeds and discarded the feathery down. (Photo by Isaac Aylward/2016 Wildlife Photographer of the Year) 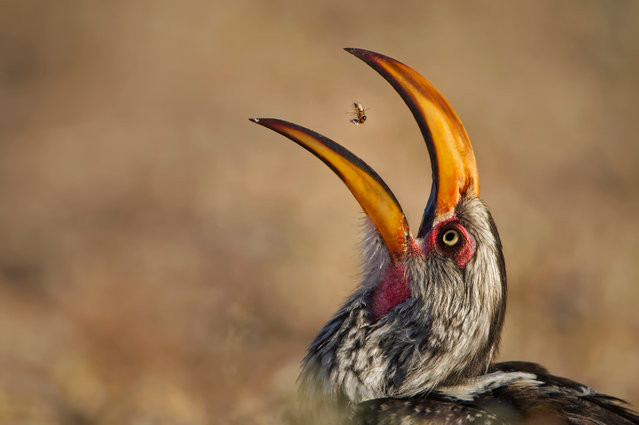 Termite tossing by Willem Kruger, South Africa. Termite after termite after termite – using the tip of its massive beak-like forceps to pick them up, the hornbill would flick them in the air and then swallow them. Foraging beside a track in South Africa’s semi-arid Kgalagadi Transfrontier Park, the southern yellow-billed hornbill was so deeply absorbed in termite snacking that it gradually worked its way to within 6 metres (19ft) of where Willem sat watching from his vehicle. (Photo by Willem Kruger/2016 Wildlife Photographer of the Year) 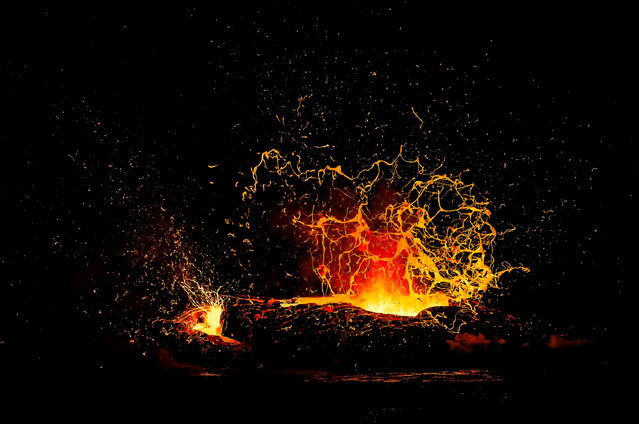 Blast furnace by Alexandre Hec, France. When the lava flow from Kilauea on Hawaii’s Big Island periodically enters the ocean, the sight is spectacular, but on this occasion Alexandre was in for a special treat. Kilauea (meaning “spewing” or “much spreading”) is one of the world’s most active volcanoes, in constant eruption since 1983. As red-hot lava at more than 1,000˚C (1,832˚F) flows into the sea, vast plumes of steam hiss up, condensing to produce salty, acidic mist or rain. (Photo by Alexandre Hec/2016 Wildlife Photographer of the Year) 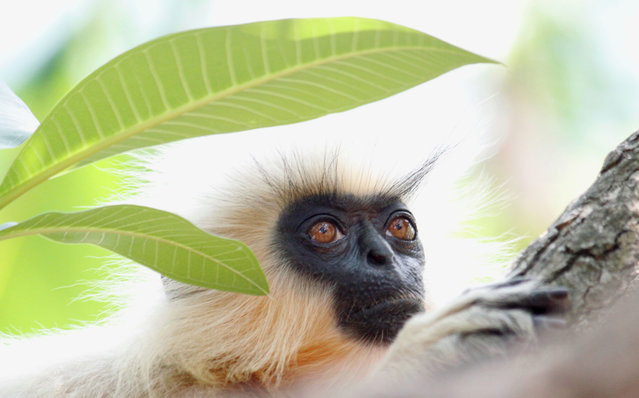 Golden relic by Dhyey Shah, India. With fewer than 2,500 mature adults left in the wild, in fragmented pockets of forest in northeastern India (Assam) and Bhutan, Gee’s golden langurs are endangered. Living high in the trees, they are also difficult to observe. But, on the tiny man-made island of Umananda, in Assam’s Brahmaputra River, you are guaranteed to see one. Site of a temple dedicated to the Hindu god Shiva, the island is equally famous for its introduced golden langurs. Within moments of stepping off the boat, Dhyey spotted the golden coat of a langur high up in a tree. (Photo by Dhyey Shah/2016 Wildlife Photographer of the Year) 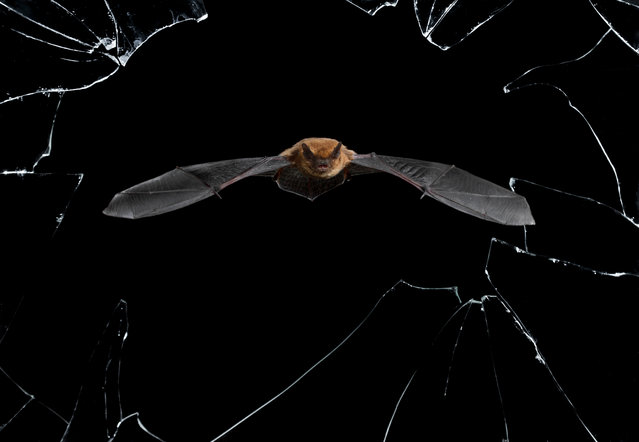 Crystal precision by Mario Cea, Spain. Every night, not long after sunset, about 30 common pipistrelle bats emerge from their roost in a derelict house in Salamanca, Spain, to go hunting. Each has an appetite for up to 3,000 insects a night, which it eats on the wing. Its flight is characteristically fast and jerky, as it tunes its orientation with echolocation to detect objects in the dark. (Photo by Mario Cea Sanchez/2016 Wildlife Photographer of the Year) 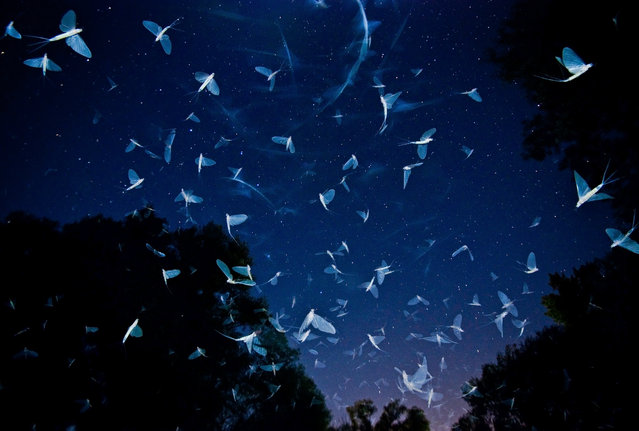 Swarming under the stars by Imre Potyó, Hungary. Imre was captivated by the chaotic swarming of mayflies on Hungary’s River Rába and dreamt of photographing the spectacle beneath a starlit sky. For a few days each year (at the end of July or beginning of August), vast numbers of the adult insects emerge from the Danube tributary, where they developed as larvae. On this occasion, the insects emerged just after sunset. At first, they stayed close to the water, but once they had mated, the females gained altitude. Winners will be announced on 18 October. (Photo by Imre Potyó/2016 Wildlife Photographer of the Year)
Edit Del
31 Aug 2016 12:05:00, post received 0 comments
Publication archive:
←   →
Popular tags:
All tags
Last searches: