When Airbus started in 1970, the first few components were delivered by road, but growing production soon necessitated a switch to air transport. From 1972 onwards, a fleet of four highly modified “Super Guppies” took over. These were former Boeing Stratocruisers from the 1940s, converted with custom fuselages and turbine engines to carry large volume loads for the 1960s NASA space program, leading to the jest that “every Airbus is delivered on the wings of a Boeing”. As time went by, the Super Guppies grew increasingly unsatisfactory for Airbus's ferrying needs: their age meant that operating expenses were high and ever-increasing, and growing Airbus production required greater capacity.

In 1991 Aérospatiale and DASA, two of the major Airbus partners, formed a company to develop a replacement. The starting point was the design for the wide-body twin-engined Airbus A300: the wings, engines, landing gear, and the lower part of the fuselage are the same as the A300 while the upper part of the fuselage is an enormous horseshoe-shaped structure 7.7 m (25 ft) in diameter. To provide access to the cargo area from the front without having to disconnect all electrical, hydraulic and flight control connections (not to mention the lengthy recalibrations before each flight the reconnection entailed), the standard A300 cockpit was moved down below the cargo floor level, and the tail structure was enlarged and strengthened to maintain directional stability.

Construction began in September 1992, and the first flight took place in September 1994. The A300-600ST's freight compartment is 7.4 m (24 ft) in diameter and 37.7 m (124 ft) long; maximum payload is 47 tonnes. At 155 tonnes its maximum take-off weight is comparable to a normal A300, showing that the Beluga was intended for large but relatively light cargo.

The main deck cargo volume of the Beluga is greater than that of the C-5 Galaxy or the Antonov An-124. However it is restricted by cargo weight capacity of 47 tonnes, compared to 122.5 tonnes for the C-5 Galaxy and 150 tonnes for the An-124. Despite this width, the Beluga cannot carry most fuselage parts of the A380, which have to be brought by ship and road usually. The Beluga has been used to transport a few A380 components”. – Wikipedia

Photos: The first Future Strategic Tanker Aircraft wing set is loaded on to a giant Beluga Airbus aircraft for transit to Bremen on February 25, 2009 in Broughton, England. The wings are the first set for Future Strategic Tanker Aircraft, a fleet of 14 Airbus A330-200s which will replace the RAF's Tri-star and VC10's. The GBP13 billion deal will provide state of the art air to air refuelling and passenger transport for troops. (Photo by Christopher Furlong/Getty Images) 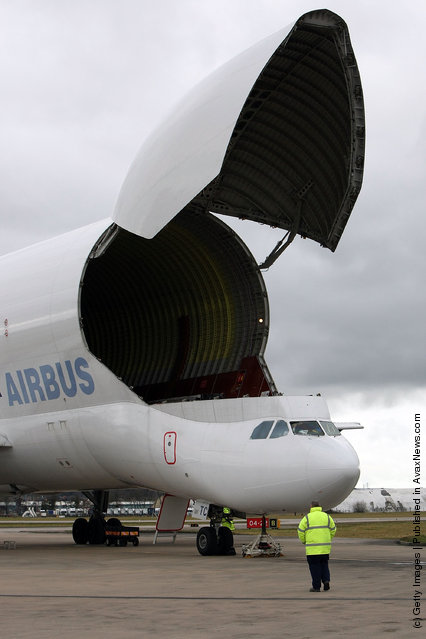 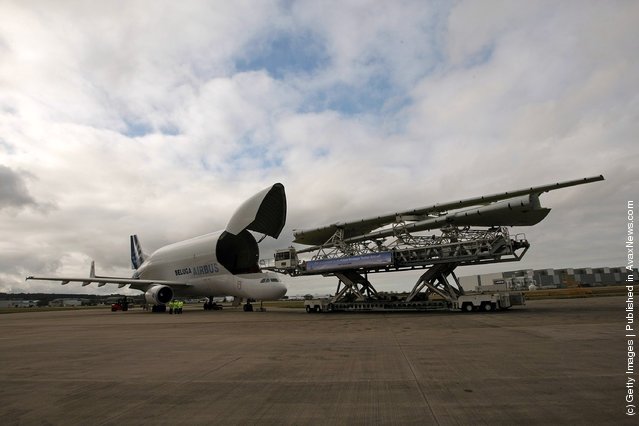 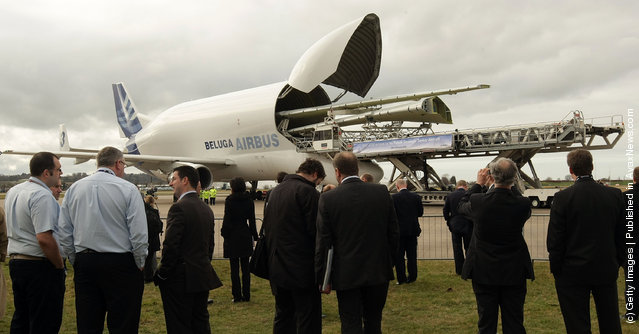 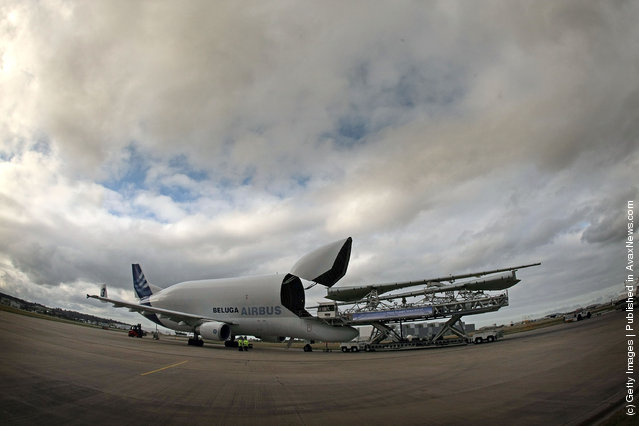 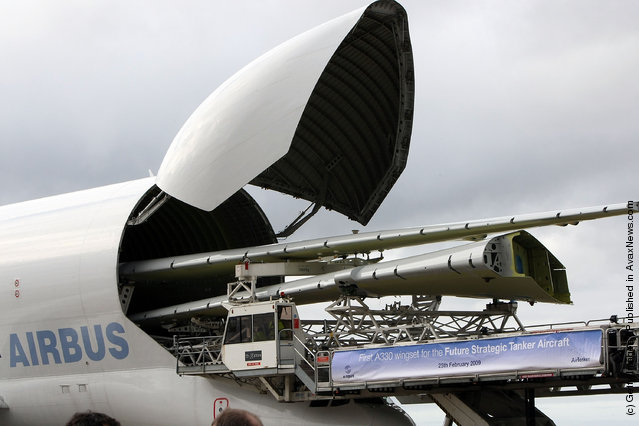 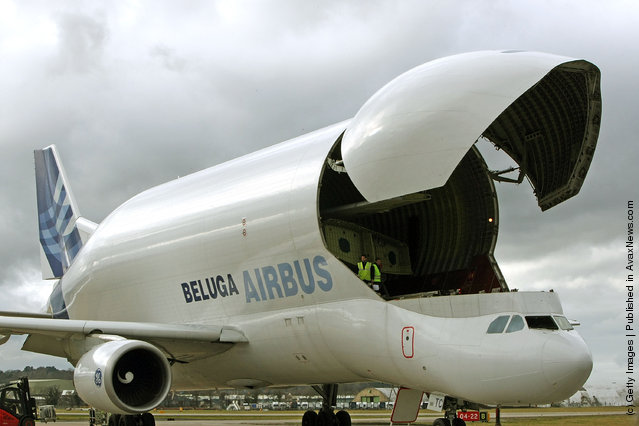 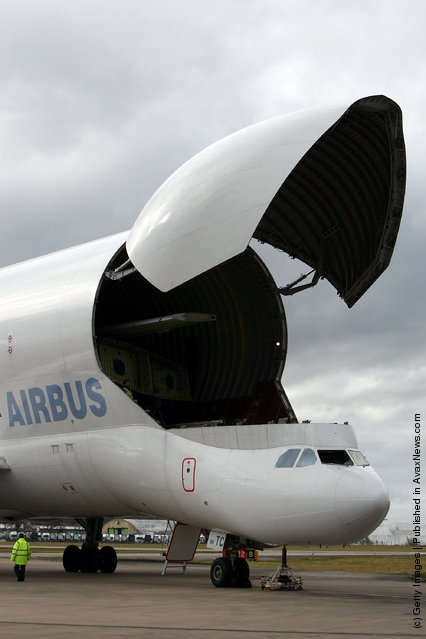 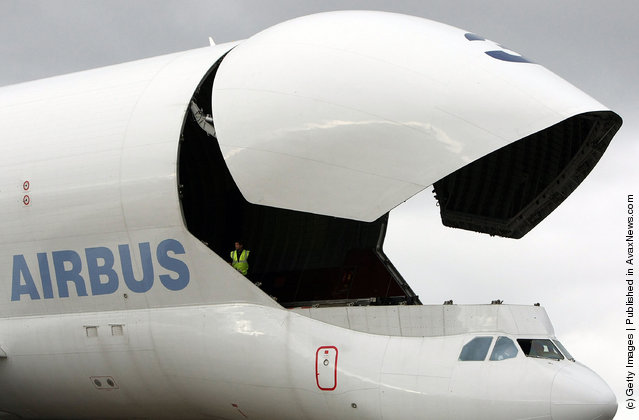 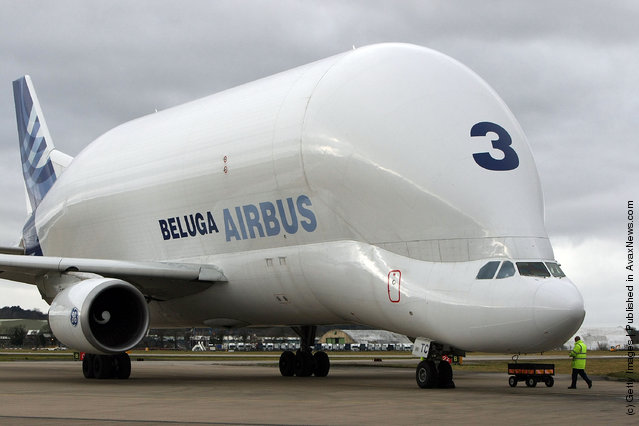 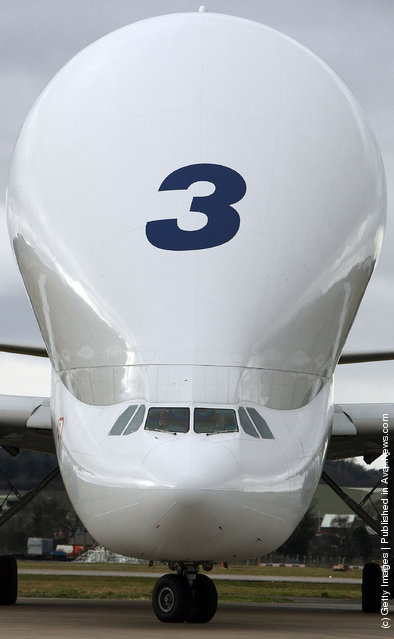 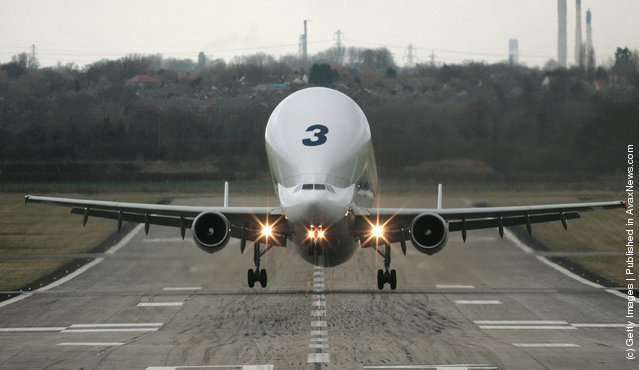 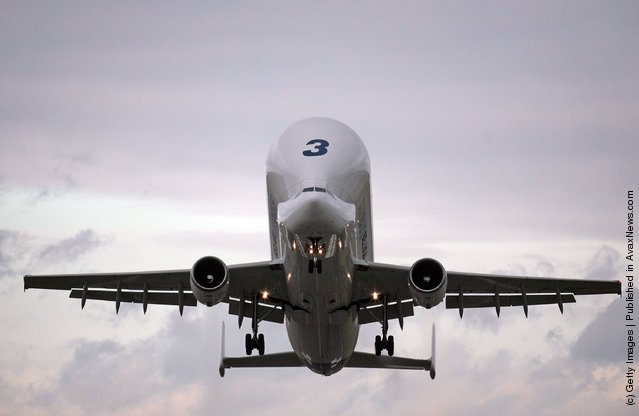